It could be argued the new Suzuki Jimny is the most desired yet totally unobtainable vehicle for the North American market. This rugged little SUV will go places big SUVs can’t. It’ll do other things some SUVs only dream of. It’s the much safer spiritual successor to the Suzuki Samurai. And if you live in the U.S., you can’t have one. So what’s the deal? Why is the world gaga for the Jimny yet Americans can’t we get one? What is the likelihood we’ll see the Suzuki Jimny in the USA? (Hint: Unlikely)

Why No Suzuki Jimny in the USA?

I won’t drag you through a long history lesson, but you need to know this: Ths Suzuki Jimny has always been a rough-and-tumble little 4WD. From its humble beginnings in the early 1970s as an air-cooled runabout to the very excellent current generation, the tiny Jimny has always been a proper 4WD vehicle. This means features like body-on-frame construction, solid front and rear axles, and a two-speed 4WD transfer case. They’ve always been the epitome of a spartan yet hard-working and fun vehicle.

The closest the U.S. got to having a Jimny was the Samurai. Very similar to the Jimny, it was introduced in 1985. It was hot-selling little ute the first few years it was out. Well, at least until the infamous 1988 Consumer Reports piece in which the outlet claimed the vehicles were rollover risks. The fallout from that exposée not only tanked Samurai sales, it also left an indelible mark on American Suzuki Motor Corporation. In fact, it could be said the company never fully recovered from CR’s story. (A lawsuit, filed in 1996 by Suzuki, was settled out of court and dropped in 2010.)

Suzuki pulled out of the North American market entirely in 2013. And this is reason number one why you don’t see the Suzuki Jimny in the USA.

I’m getting ahead of myself, however. Let’s look at what makes the current fourth-gen Jimny so great. 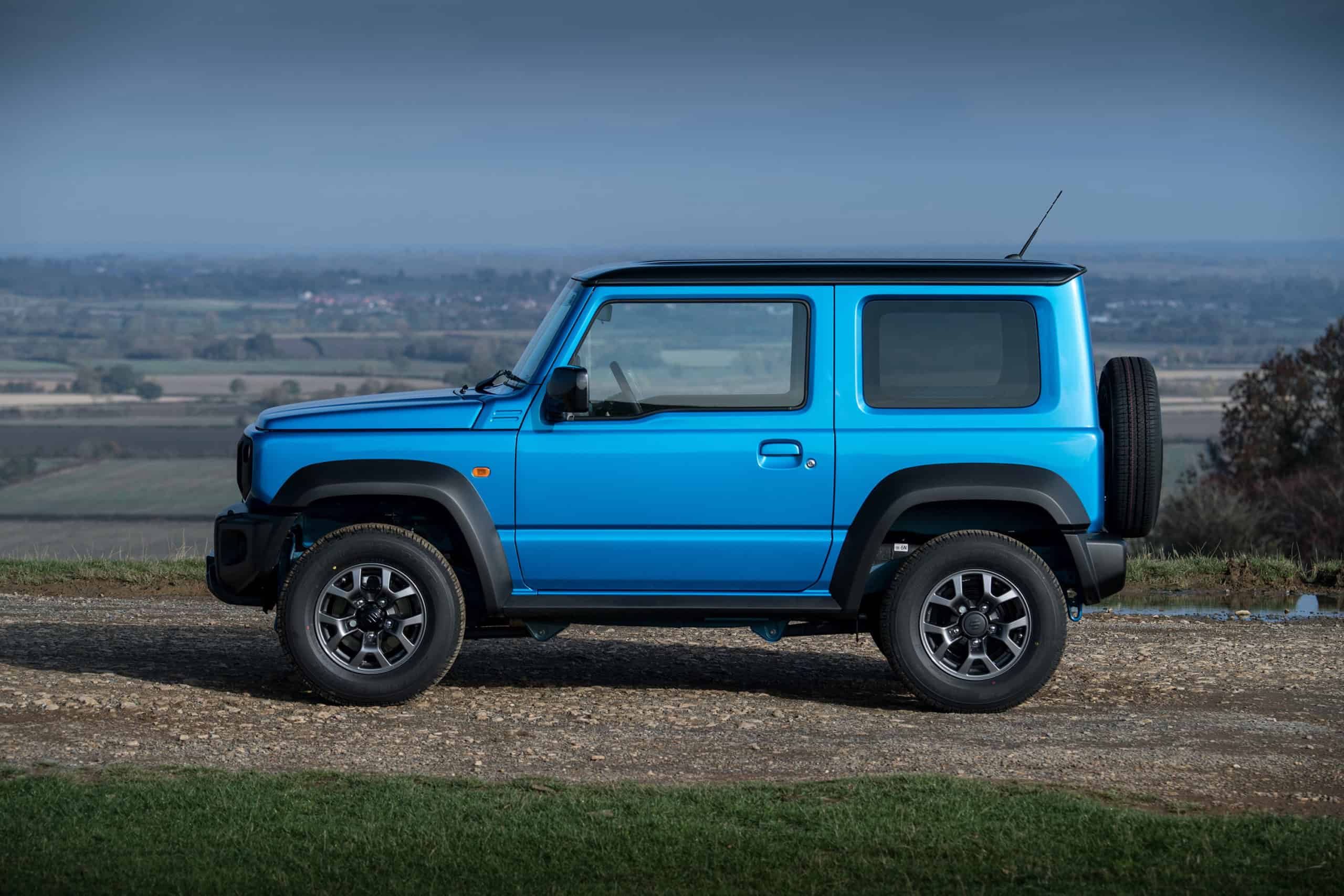 What Makes the Jimny So Great?

Automotive writers, editors, and buyers alike fawn over the fourth-gen Jimny. Why? I think it’s a combination of a few things.

The Jimny has stayed true to its roots, much in the same vein the Jeep Wrangler has done. For example, it still has those super-durable solid front and rear axles, which are the preferred suspension choice for serious off-roading. Although this setup isn’t known for its on-road comfort, the new Jimny has managed to tame down the harshness on highways. It also continues to offer a stout ladder-frame construction for durability, and a manually selectable 4WD system offering 2WD, 4WD high, and 4WD low—great for off-pavement prowess.

Its boxy shape bucks the trend of rounded-off crossovers and sedans, too. The shape is like a scrappy bulldog, fierce and ready to fight.  Its free-revving 1.5-liter engine isn’t a powerhouse at 101 hp, but it is a joy to drive. Especially when paired with the five-speed manual transmission. Plus, that little engine only has to propel a vehicle that is a tick under 2,400 lbs.

Add in that tradition of a spartan interior and demeanor, and you have a hit: simple, rugged, and fun. You’re not getting some fluffed-up cute-ute here. The Jimny might be tiny, but its off-road capability is big.

My Jimny Experience in Iceland

My wife and I spent nine days with a rented new Jimny in Iceland in July 2019. After my time with the rig, I fully understand the hype.

This is not the Suzuki Jimny (or Samurai) of yore. Gone is any tinny “cheap” feel. The new Jimny feels solid, modern, and safe. It comes with all the safety features you’d expect in any late-model car, truck, or SUV. This includes airbags, skid control, ABS brakes, lane-keeping, and so on. It also isn’t underpowered. The aforementioned engine/transmission combo paired with the lightweight and willing chassis make the ute an absolute blast to drive, especially on dirt. But its compact size and short gearing also make it a usable city car. 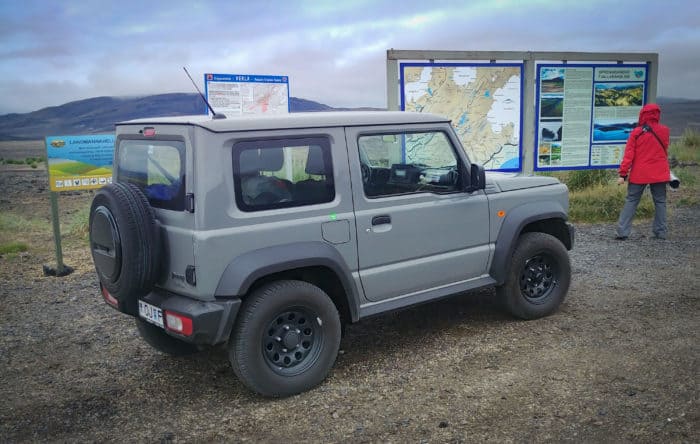 Versatile On and Off-Road

Where the Jimny’s amazing charm really spoke to me was on the dirt backroads of Iceland. Here is where the Jimny felt less like a truck and more like a boxy rally car that begged to be flung around corners. Shifting into 4WD high added traction and a sure-footed feeling. The SUV felt unflappable and gobs of fun. When ascending some of the rugged and mountainous F-Roads around Snæfellsjökull National Park, the low-range 4WD did its job providing maximum traction and usable power over tough terrain. When it was time to return back to the island’s famous Ring Road, the Jimny easily cruised at 90–100 KMH (56–62 MPH). 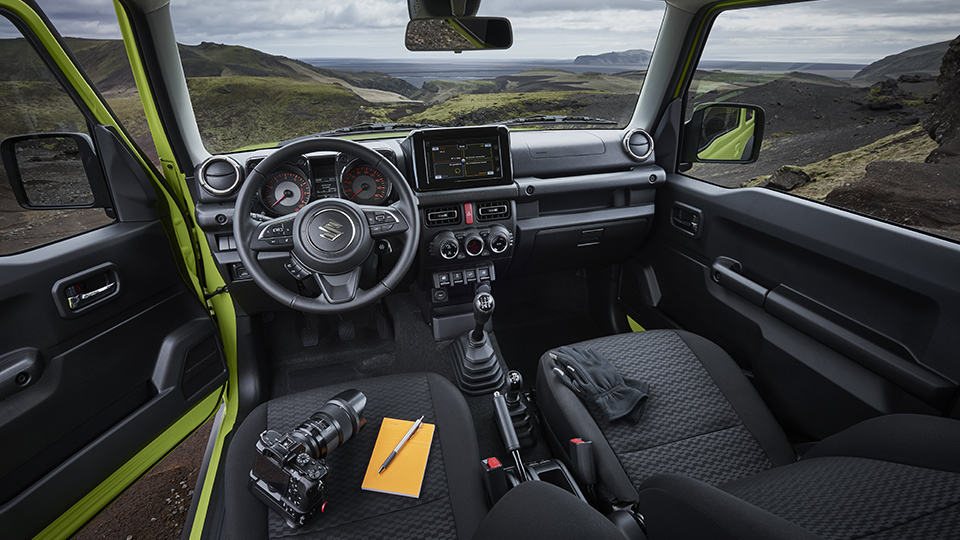 Yes, the interior is somewhat barebones. There wasn’t a center armrest, for example. Some of the interior bits feel a little thin compared to other modern SUVs. But there were retro touches that hearken back to the original Jimny or Samurai. This includes the gauge cluster. However, the interior is also still modern and comfortable with a hint of retro. Our rental had cruise control, air conditioning, Bluetooth, USB outlets, and power windows and locks. The seats were comfortable, heated, and supportive. The rear bench folded down and accepted nine days worth of camping gear. 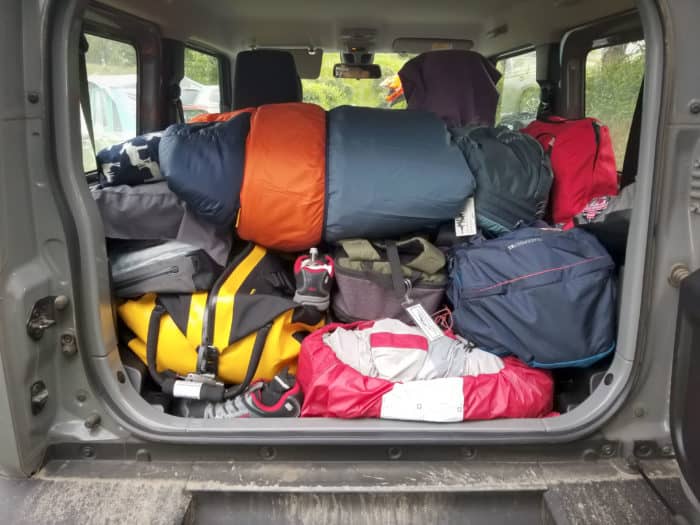 After more than a week with a 2019 Jimny (and camping around Iceland), I came to the conclusion that the vehicle really is that good. I was heartbroken when we had to return it to the rental agency, especially knowing I couldn’t buy a Suzuki Jimny in the U.S. upon our return.

First things first: It’s hard to sell the Suzuki Jimny in the U.S. when you don’t have a dealership network there. Because Suzuki pulled out of North America in 2013, there are no Suzuki car dealerships, and therefore, no place for the Jimny to be sold. There have been all sorts of automotive conspiracy theories about how the Jimny could come to the States under another marque.

For example, Suzuki and Mitsubishi have a partnership for tiny kei cars in Japan. Plus, Mitsubishi has a dealer network in the U.S. and could really use a hit vehicle these days. Maybe the return of the Montero or a Montero Jr.?

Then there’s the fact Toyota recently purchased 4.9% of Suzuki. Hmm … perhaps a Jimny could be badge-engineered as an SJ Cruiser or Toyota FJ 15 could enter Toyota dealers? Mazda already builds the Toyota Yaris, Subaru has partnered with Toyota on the 86, and the latest Supra was co-developed with BMW. Stranger things have happened!

But you can likely take your tinfoil hats off, because it’s highly unlikely the vehicle will come stateside, even under another marque. 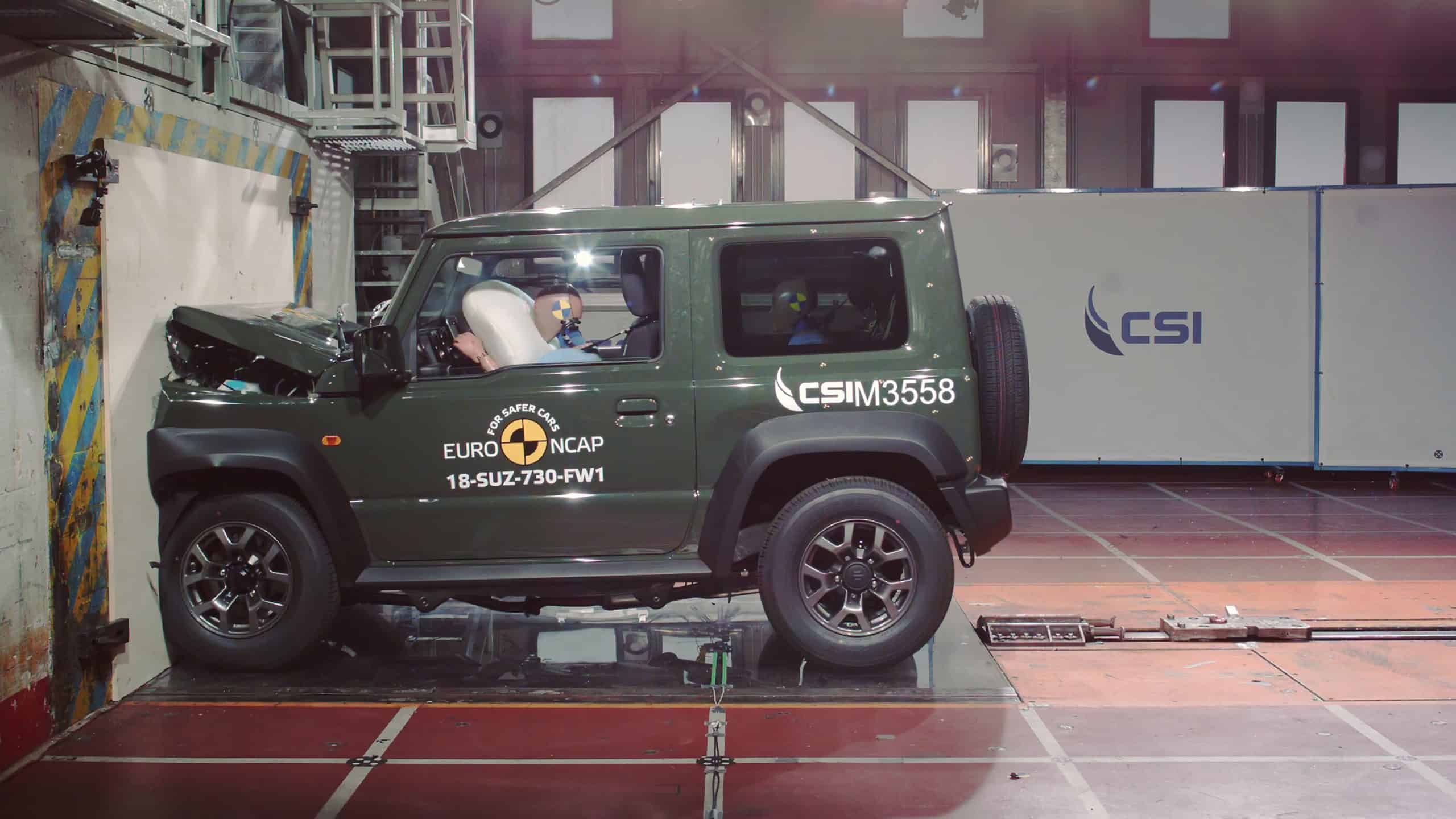 There’s also a question of crashworthiness. In looking at Europe’s NCAP (New Car Assessment Programme) crash ratings, the Jimny got 3 of 5 stars. By comparison, the 2018 Jeep Wranger received just 1 of 5 stars. I think the Jimny would pass the U.S.’s standards.

The other wildcard, however, is its emissions output. It was reported earlier in the year that the Jimny would not be sold in Europe for 2021 due its inability to meet ever-tightening Euro C02 emissions standards. But, while Europe’s standards are getting more restrictive, I have a feeling the Jimny would easily pass in the U.S.

Regardless, I  don’t expect the Suzuki Jimny in the USA anytime soon.

I Want a Suzuki Jimny in the USA!

As I type this, I literally got a message from a friend who works in the off-road industry in Australia. He tells me his company is looking to build an off-road winch bumper for the new Jimny. Well, I envy the Aussie’s ability (and the rest of the world’s) to buy a new Jimny. It really is that good. With America’s obsession for trucks and SUVs, the Jimny could be a serious competitor on the U.S. landscape and would be a frugal 4×4 option.

But alas, it will remand a wonderfully rugged piece of unobtainable vehicular eye candy. At least until 2043 when you can import one under the 25-year import rule. I’ve already started saving for mine!


The Best Toyota Models for 2020
The Best and Worst McLaren Cars in 2020
What Happened to the British Automotive Industry and Where i...
Electrify America Announces Plan to Double EV Charging Netwo...
Power & Refinement: 2022 Land Rover Defender Gets Supercharg...
Shelby Baja 700 vs. Hennessey VelociRaptor: Two Different Be...