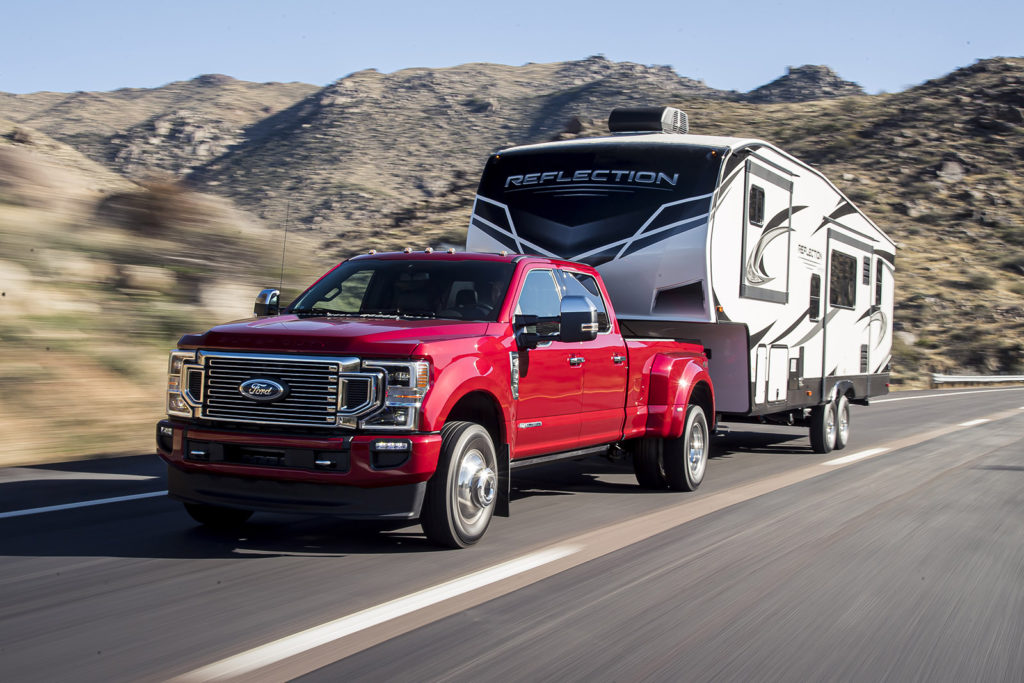 One thing all pickup drivers have in common is the feeling of rising anxiety as they watch their fuel gauge fall below the quarter-tank mark and rapidly plummet closer to “E.” That tension is amplified when you are driving across unfamiliar terrain and are not sure where the next gas station might be. Or perhaps it’s late at night when smaller stations are closed and running out of fuel becomes a distinct possibility. In these scenarios, having an extra 10, 15, or 20 gallons of fuel in the tank could save you some stress.

Maybe you are an RVer, rancher, farmer, construction worker, or a “hot-shot” commercial transport driver towing trailers with a heavy-duty diesel pickup. If you don’t like making frequent pit stops for fuel as you go about your daily tasks, an extended fuel tank could be the answer. The more miles you can put under the wheels between fill-ups, the better.

That’s where having a higher-capacity tank, like the TITAN Gen6 XXL fuel tank, in your diesel pickup can save you both time and money. 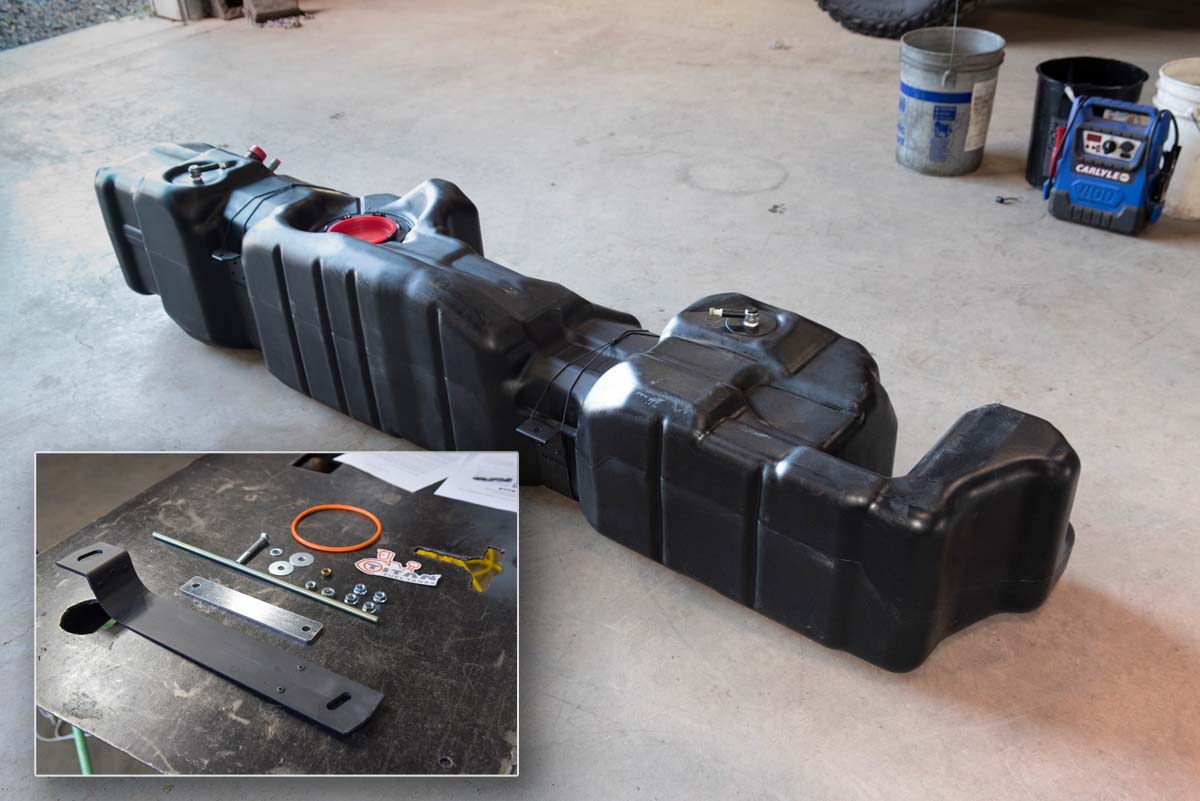 TITAN Fuel Tanks, based in Idaho Falls, Idaho, has been offering a solution to extend the driving range of pickups for decades with their wide selection of high-capacity fuel tanks for both gas and diesel applications.

Their newest offering is the Generation 6 Extended Capacity Replacement Tank (#7020317) for 2017-newer, long-bed Ford Super Duty Crew Cab Diesel pickups. The TITAN Gen6 XXL fuel tank, which costs about $1,300, depending on where you buy it, increases the fuel capacity to 65-gallons, which is 17 gallons more than Ford’s 48-gallon tank.

What makes the DOT-compliant, C.A.R.B-certified TITAN Fuel Tanks special is the “military-grade” plastic construction. While OEMs such as Ford use linear polyethylene, TITAN goes a step further in strength and durability by using cross-linked high-density polyethylene (XLHDPE) for their tanks. It’s also has a ¼-inch thick wall, so it’d take a lot to puncture it.

“Sheer strength is the biggest difference,” said Mike Deford, TITAN’s marketing manager. “The cross-linked polymer is leaps and bounds ahead of linear polyethylene or metal offerings. It doesn’t rust or corrode, nor does it crack or crush when hit. It also doesn’t conduct cold or hot temperatures as poorly as metal does, so everything inside stays fluid, as it should be.”

What the new tank doesn’t come with is a replacement skid plate. So we suggest ordering one as the OEM skid plate will not fit the new tank, and the TITAN fuel tank hangs about 2 inches lower than the OEM one.

How does TITAN get the extra fuel capacity? Simple. Fill in the open spaces around the OEM tank design. For example, TITAN’s XXL tank for the Long-Bed Crew Cab F-350 4×4 fills in most of the void between the OEM tank and the transfer case. The aftermarket tank is also 1.75 inches deeper and slightly wider than the 48-gallon factory tank.

An inch here, a foot there over 6-plus feet, and suddenly the volume is there to hold 17 more gallons of fuel. That higher capacity also means that you’ll need to have the DIC re-calibrated at your local Ford dealer after install so it reads correctly.

Easy to Install With The Right Tools

The TITAN website claims they make every effort to make installation as simple as possible to swap the Gen6 XXL Fuel Tank in place of your original tank. We found that to be true. Not only does TITAN provide detailed instructions, but they also have video instructions on their website.

Generally speaking, installation entails removing your pickup’s stock tank, moving the in-tank sending unit and external water separator, connecting fuel lines over to the TITAN tank, installing a new forward tank mount, and bolting in the new tank. There are no modifications needed.

One other installation note: it saves a lot of time and headache if you run the OEM fuel tank as low on fuel as possible before making this swap. Diesel weighs about 7 pounds per gallon, so the less fuel in the tank, the easier it is to handle and remove it from under your truck.

So, get to it — you’re well on your way to enjoying fewer pit stops on your drive!

How To Install a TITAN Gen6 XXL Fuel Tank 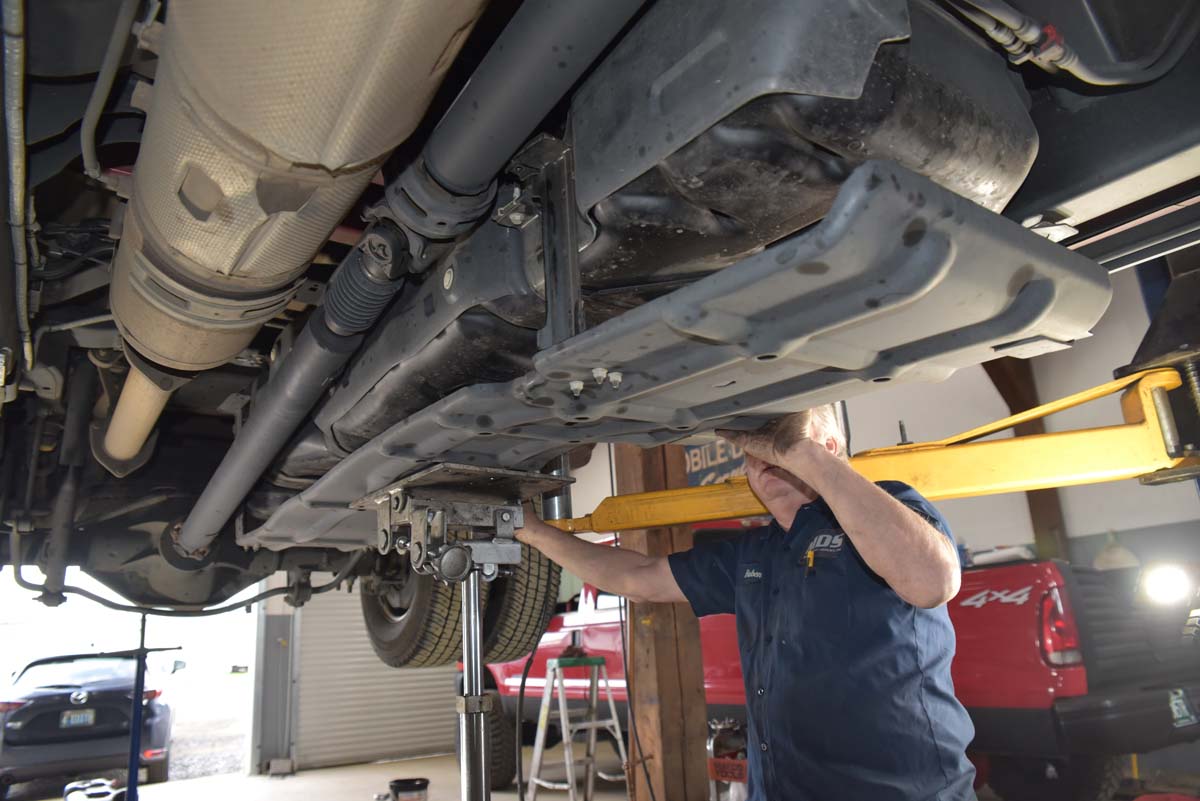 Step 2: Disconnect the fuel lines from the tank to the engine. 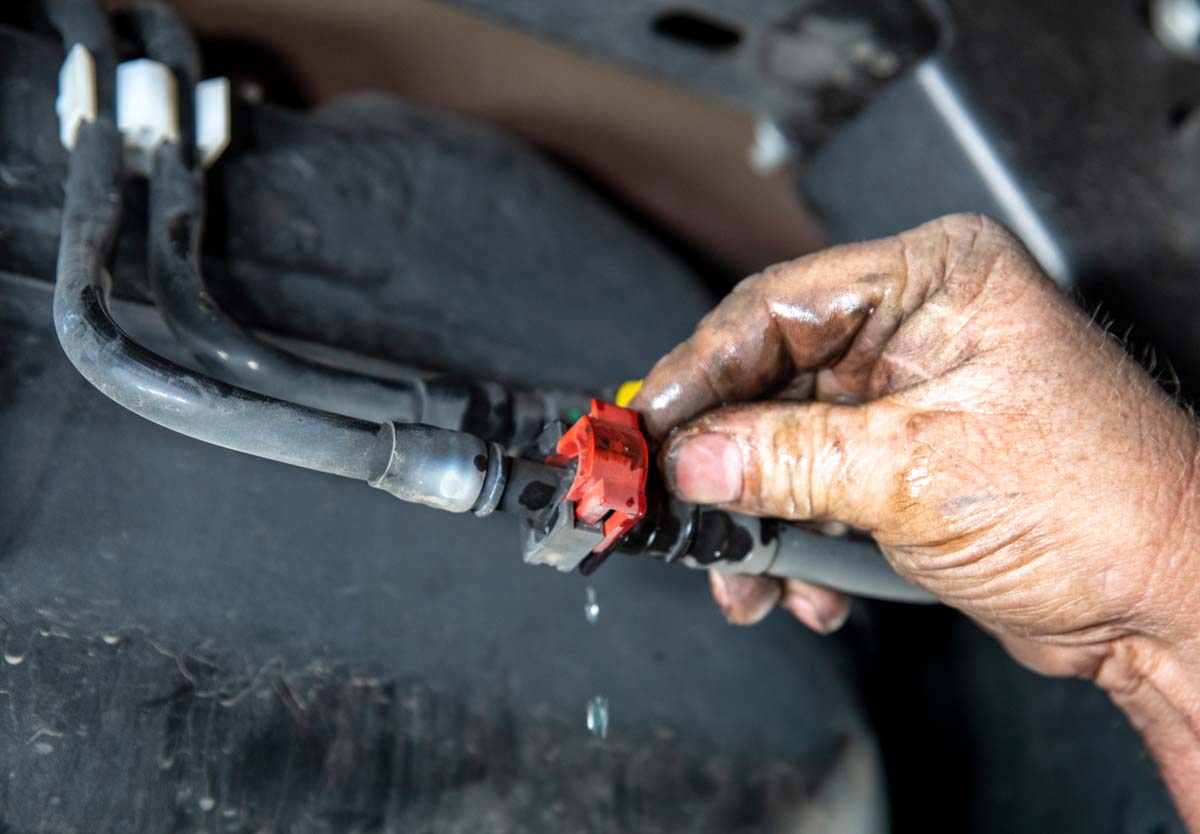 Step 3: The filler hose and vent also need to be removed to drop the OEM tank. 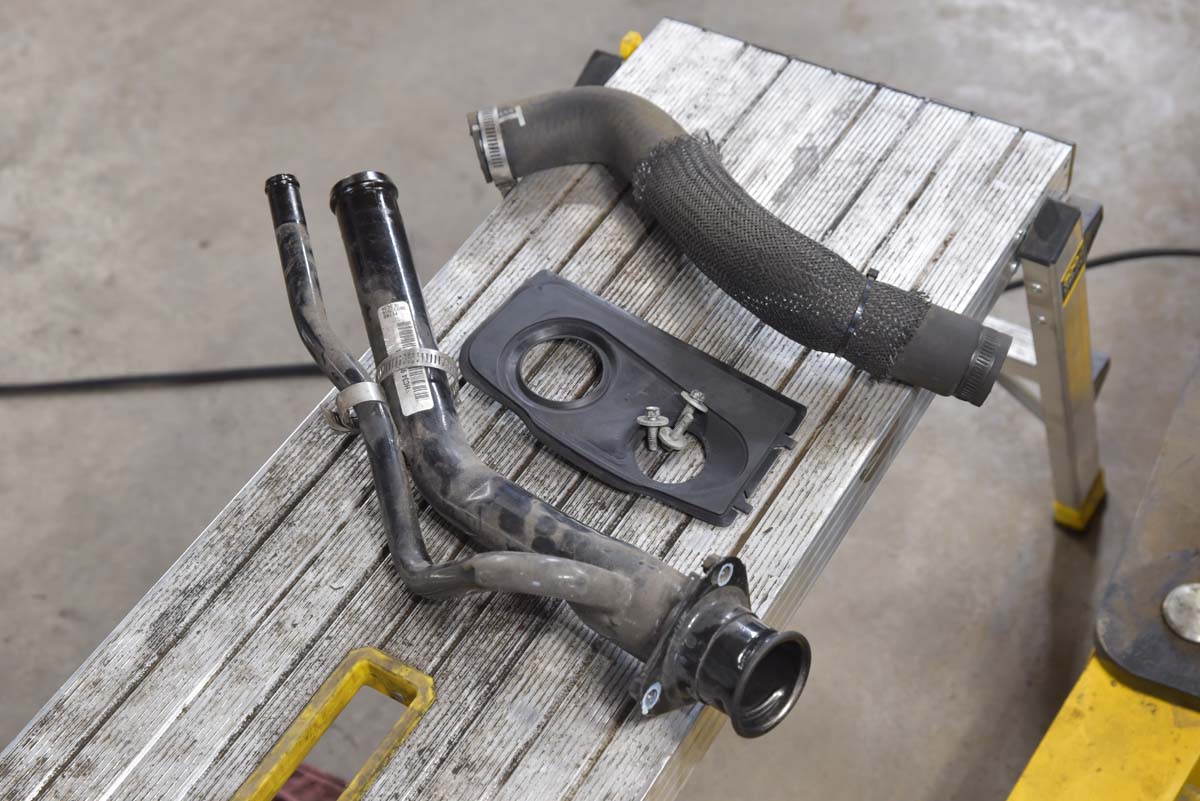 Step 4: Ford uses a strong thread locker on the tank mounting bolts. Using an air impact gun will most likely break the clips holding the nuts. 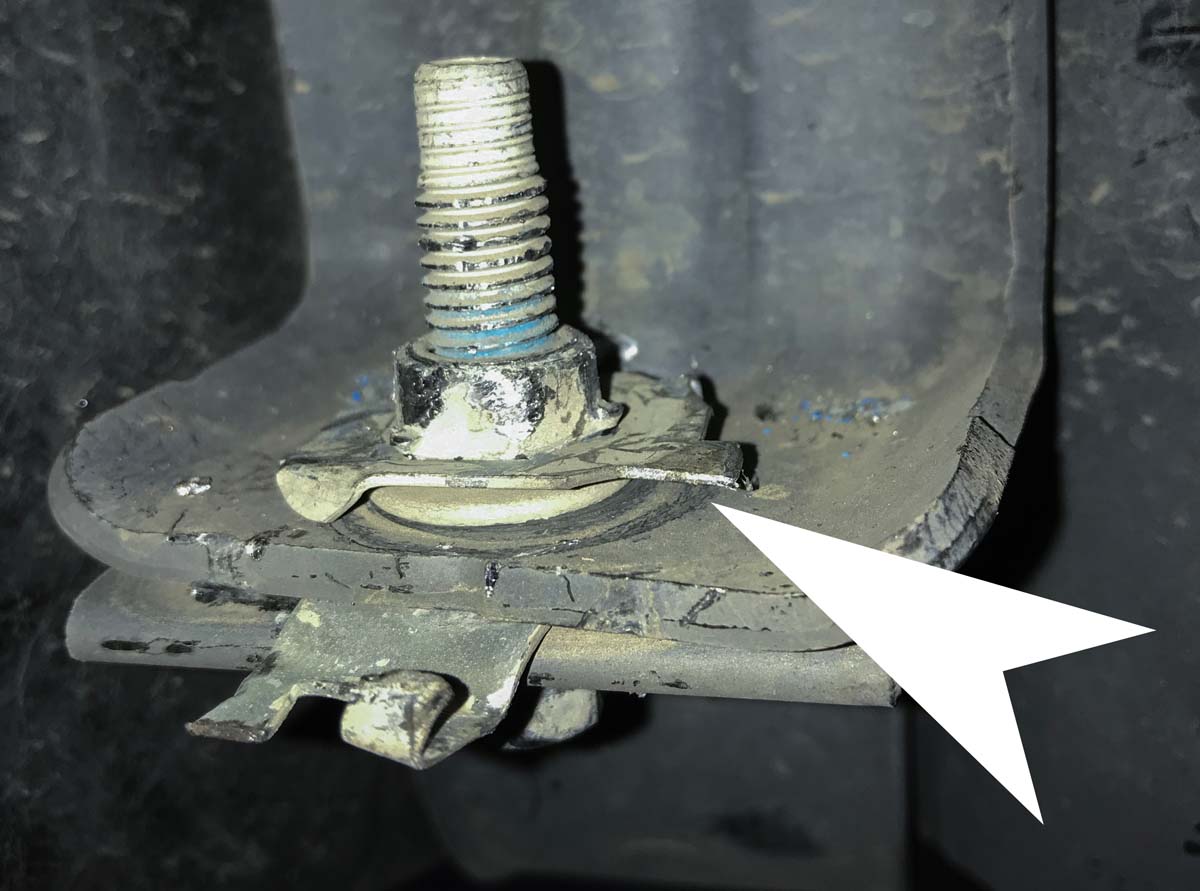 Step 5: Broken clips can be removed with a cut-off wheel to get bolts out. 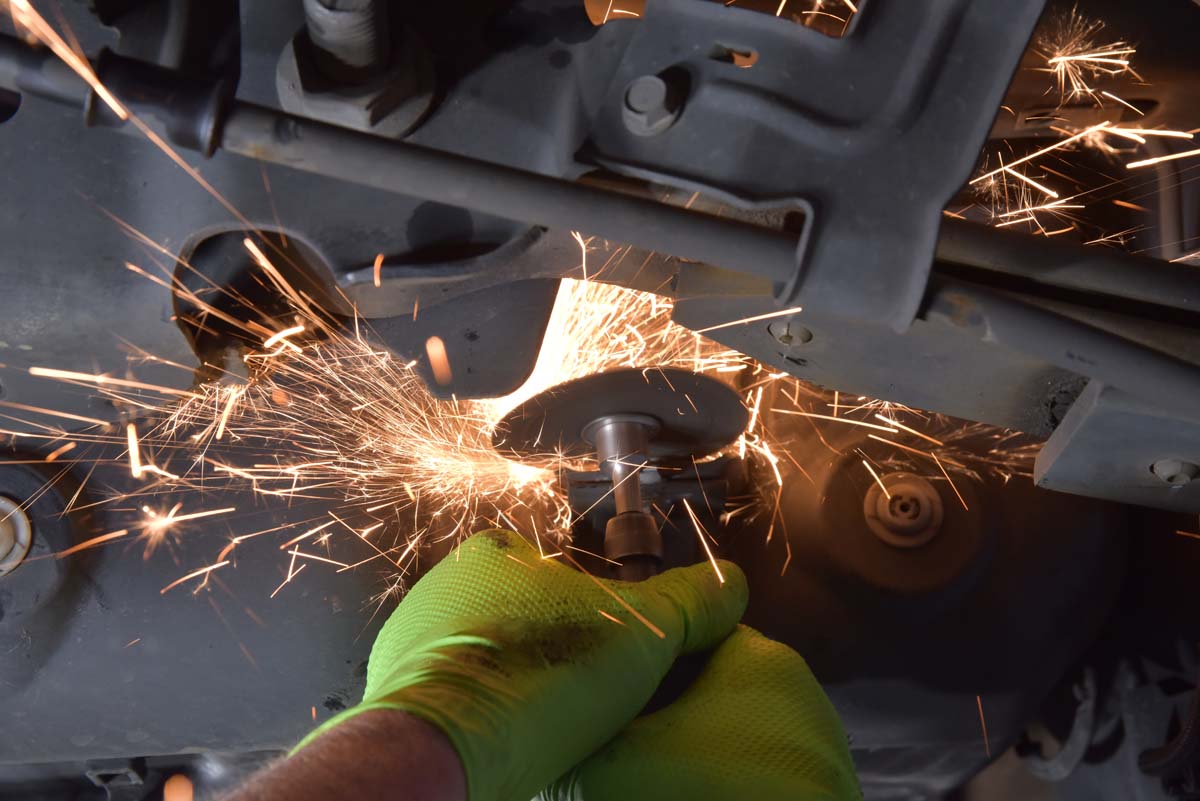 Step 6: Before removing the OEM fuel tank, removed the bolt that holds the water separator to its tank mounting bracket. Use a T-27 Torx bit. 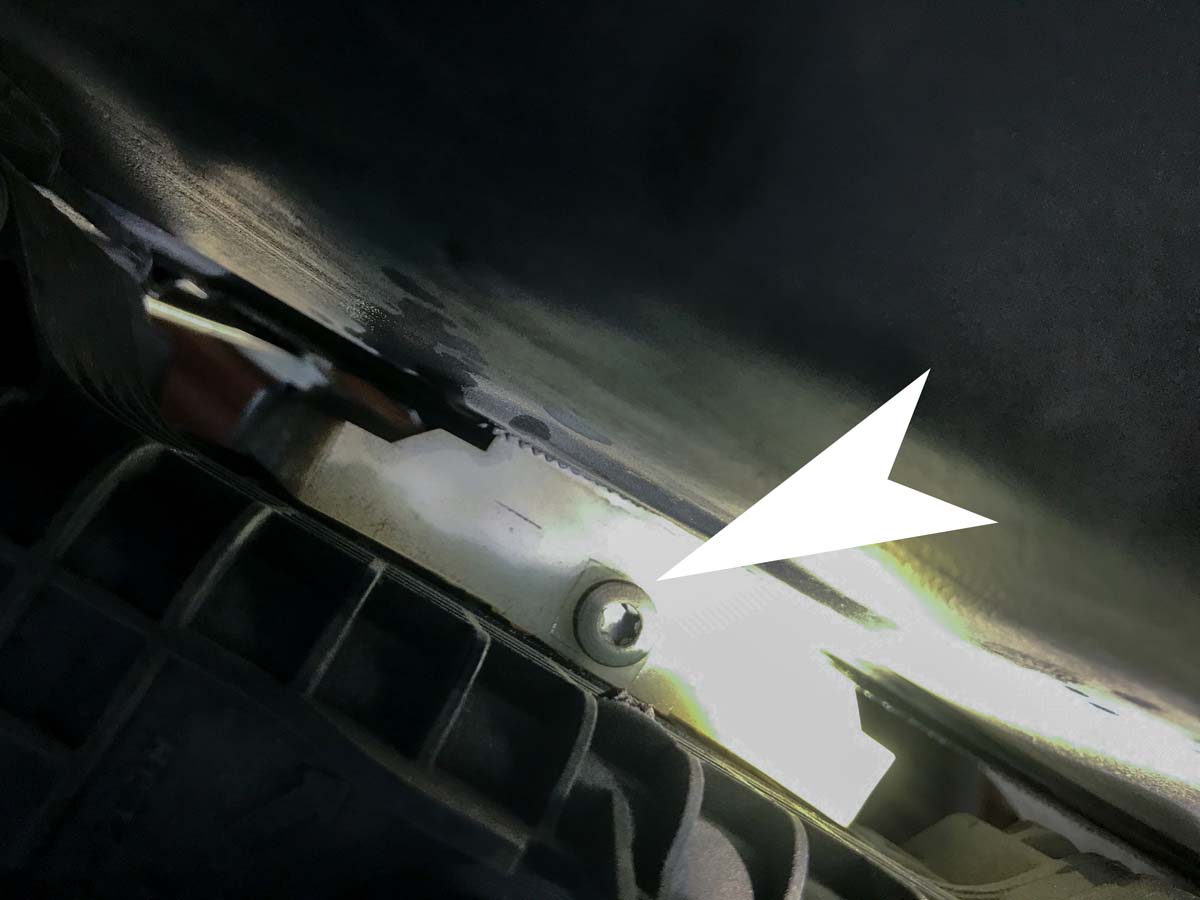 Step 7: A hydraulic transmission jack and a helper make removal of the factory tank an easy process. 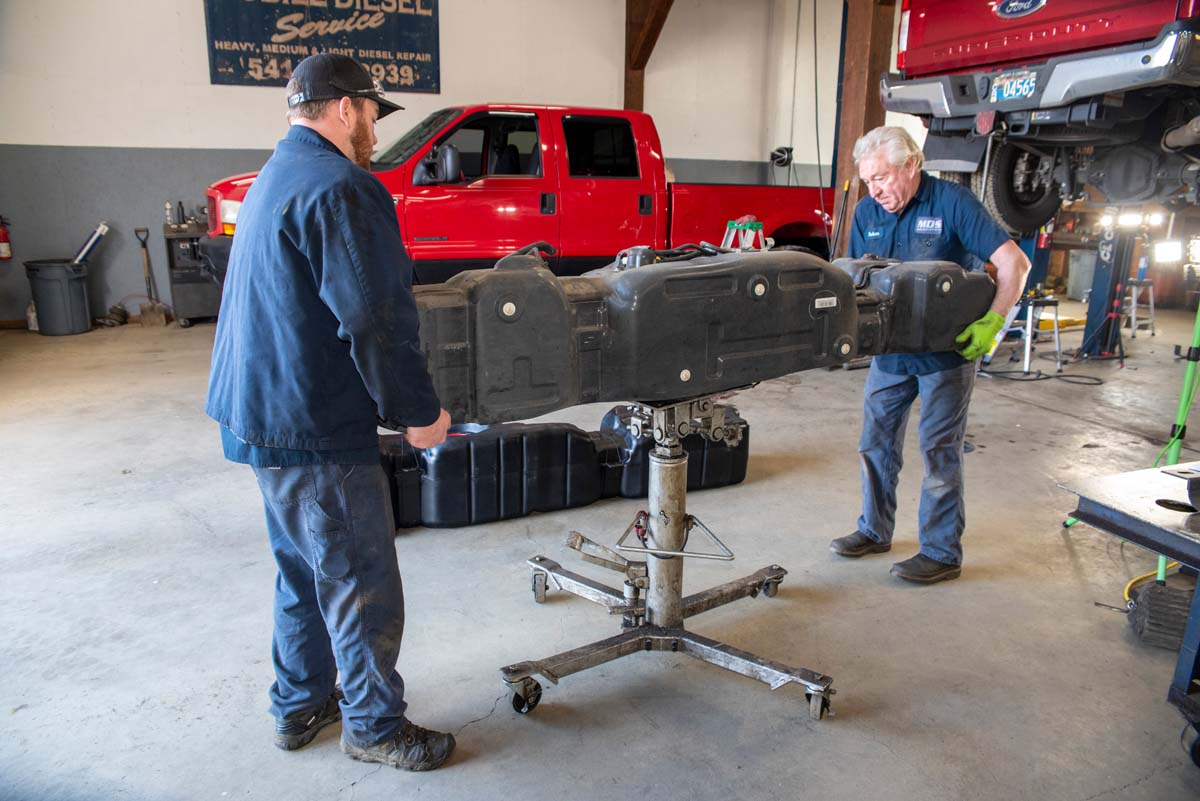 Step 8: We removed the lock ring holding the sending unit in the OEM Ford tank using a hammer and flat drift. 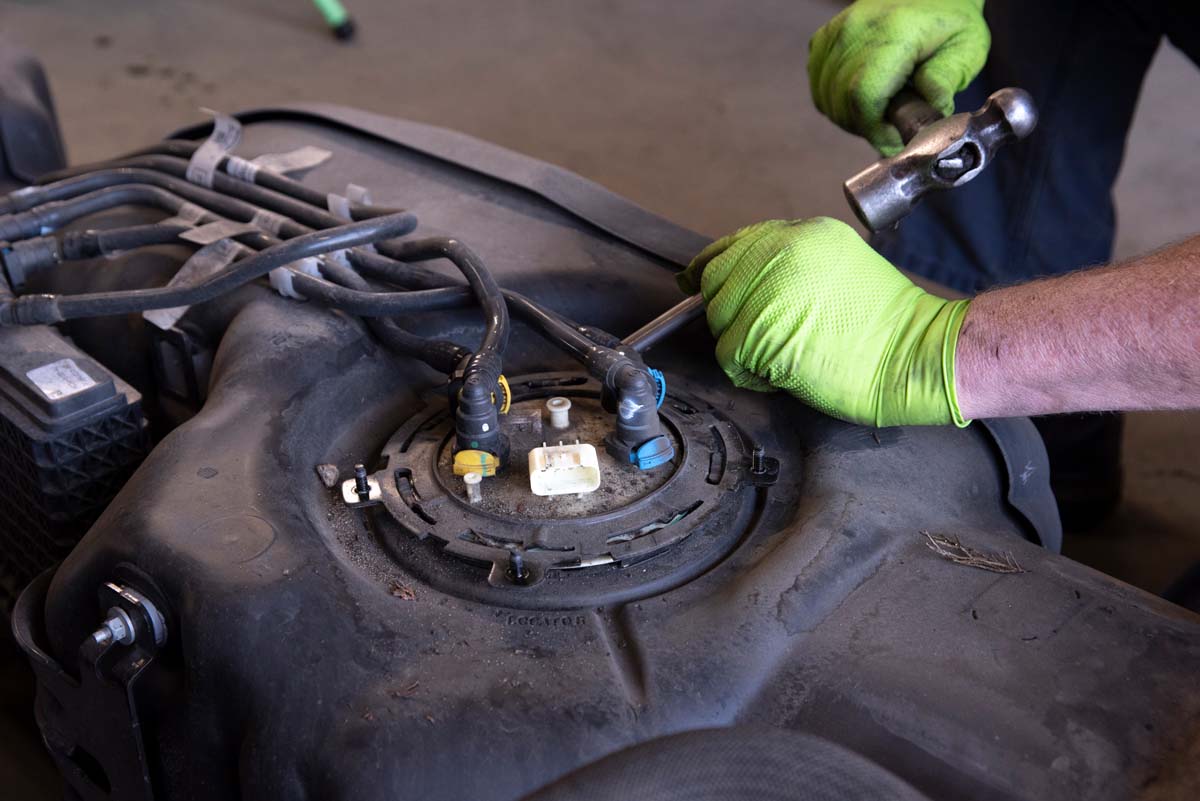 Step 9: The fuel lines need to be popped out of the factory brackets so new lines can be moved together for the TITAN tank. 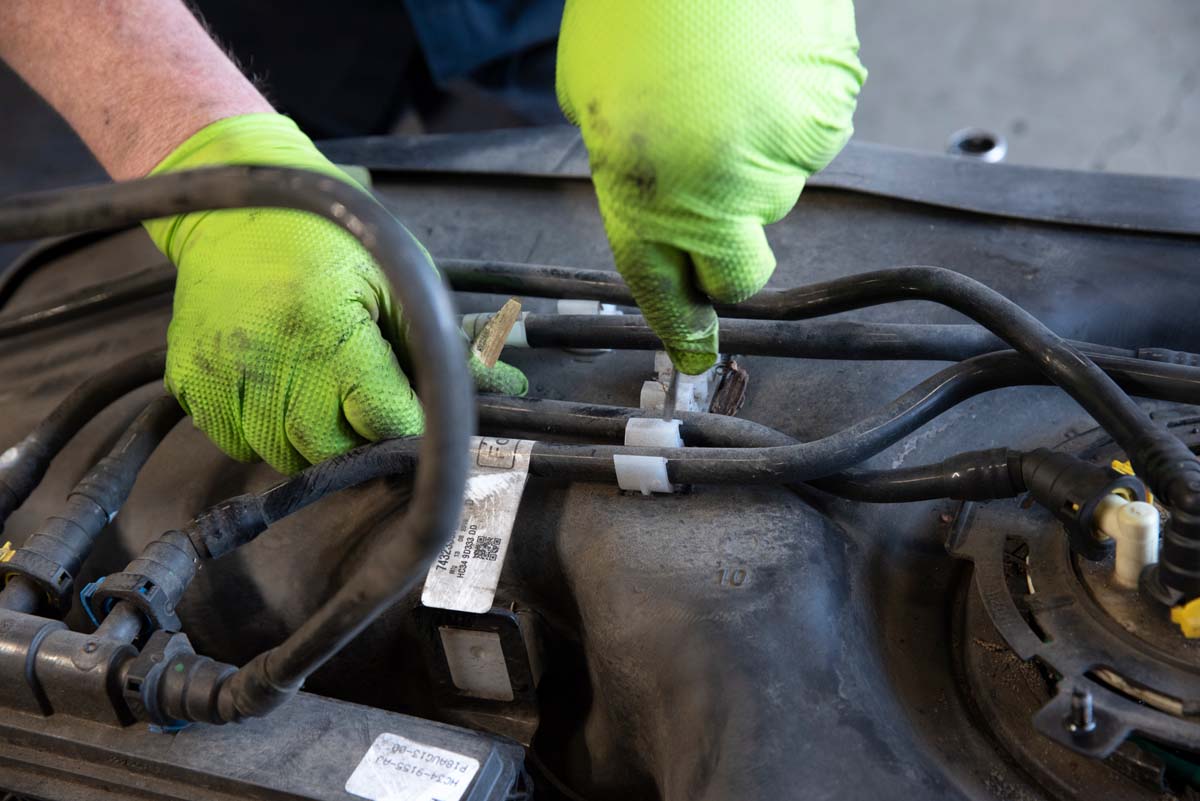 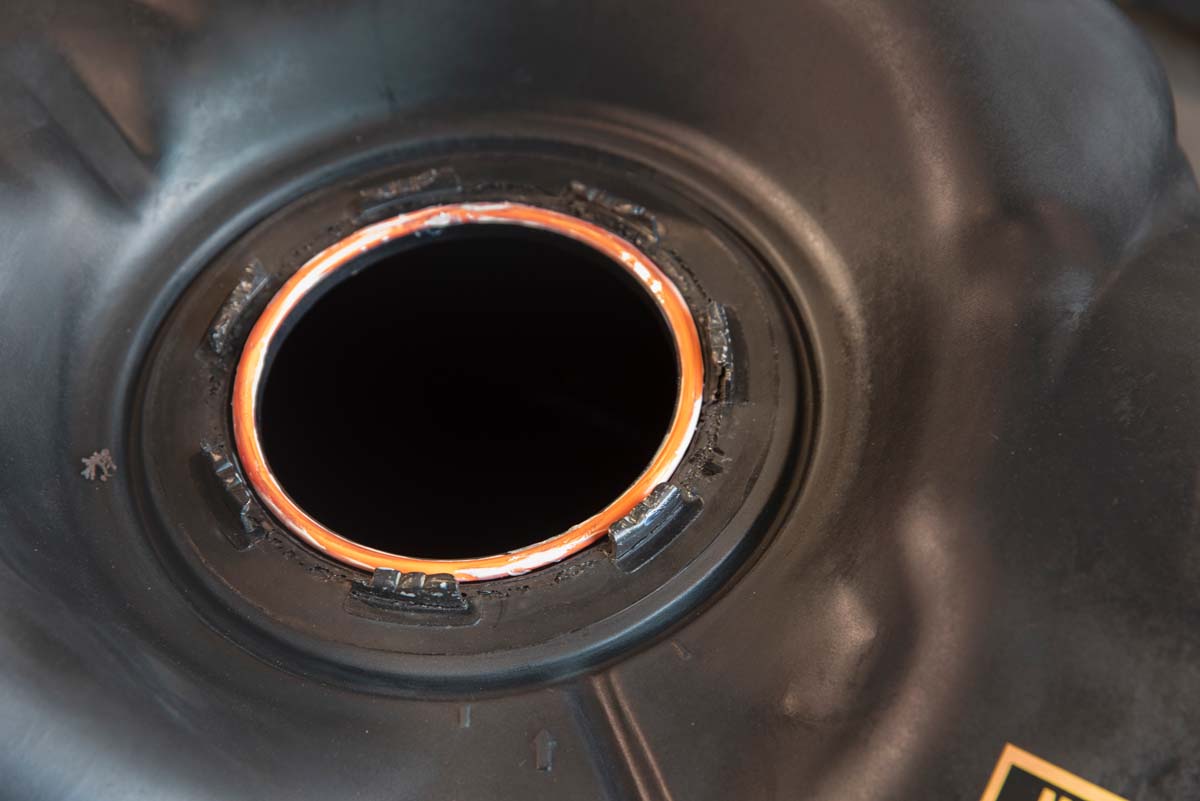 Step 12: The change-over of the OEM fuel tank components is a no-drama event. Lift and set into place in the TITAN tank. 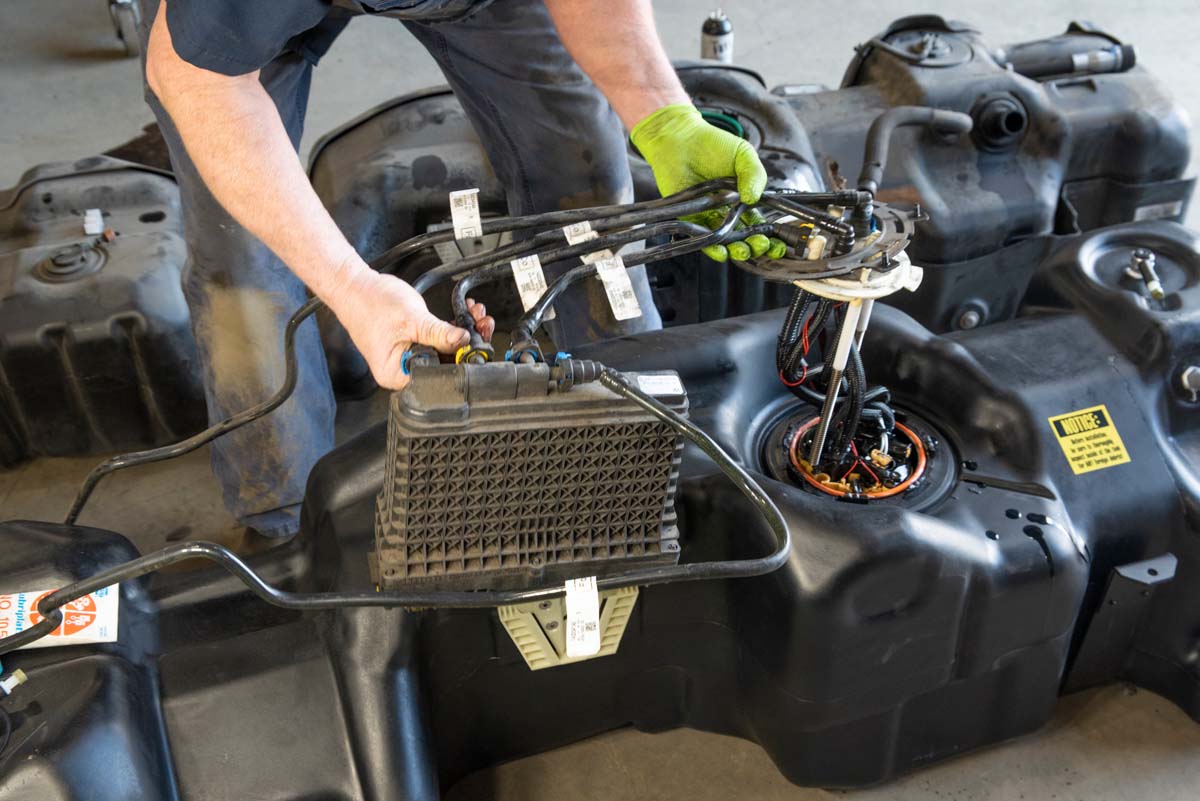 Step 13: It takes a few good raps with a hammer to get the sealing ring to lock into place. Making sure this ring locks is critical in ensuring there are no fuel leaks. 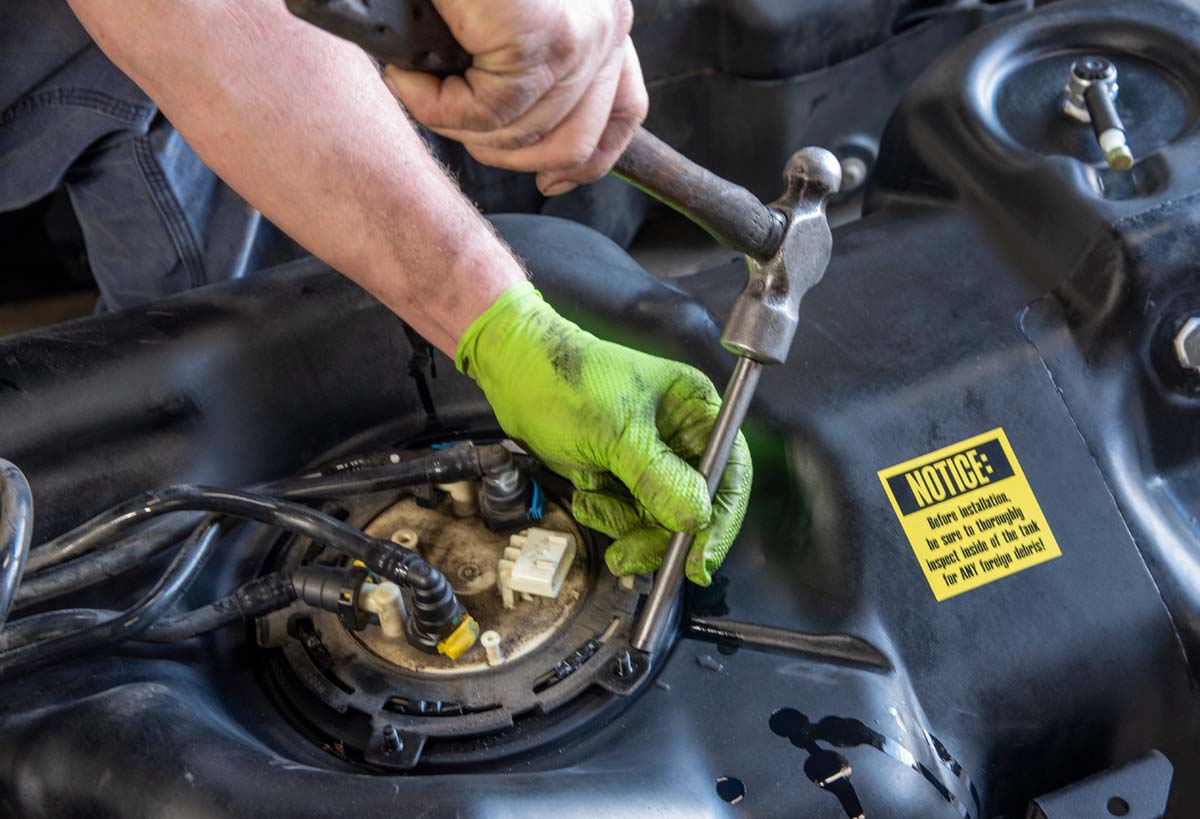 Step 14: Re-installing the water separator bracket retaining screw is important — and easiest done when the new tank is being prepped. 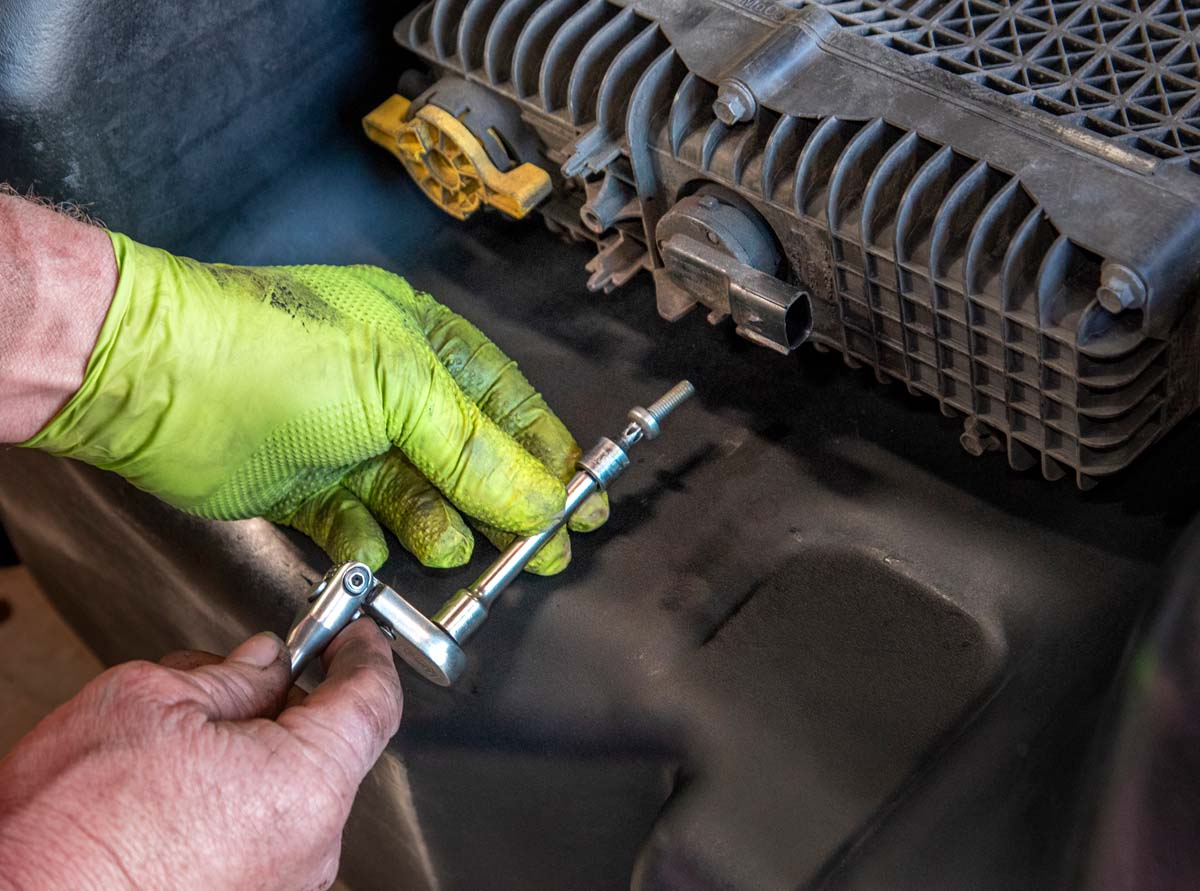 Step 15: The TITAN XXL kit comes with a new front mounting plate, threaded rod, and hardware. Install before lifting the tank into place. 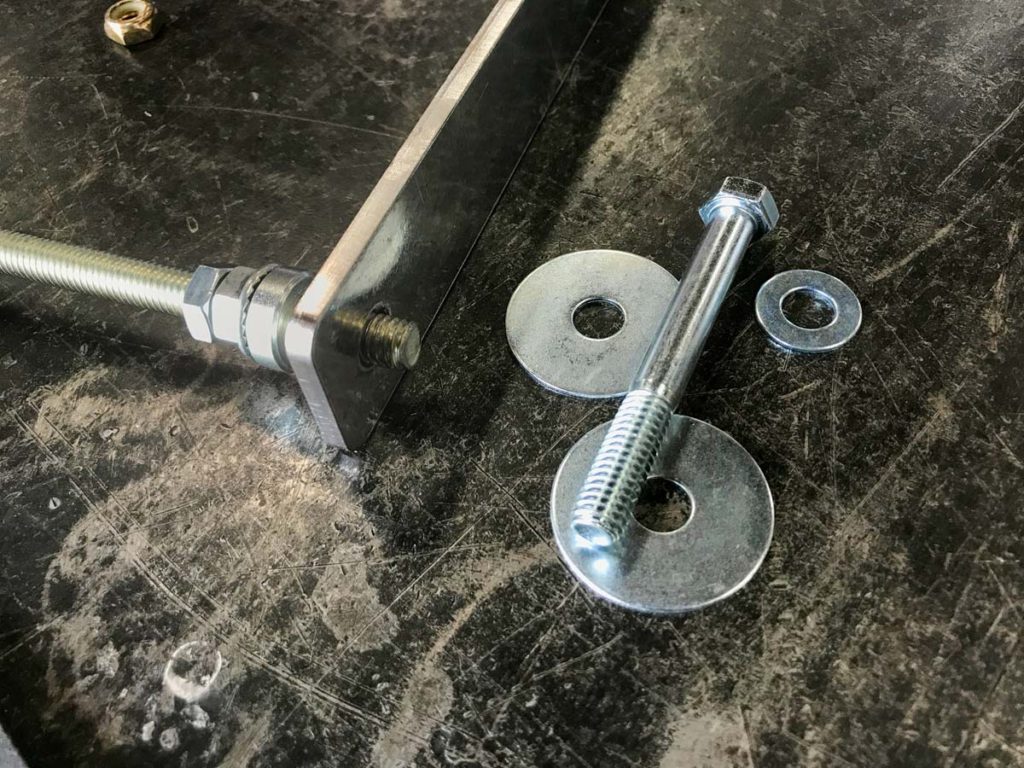 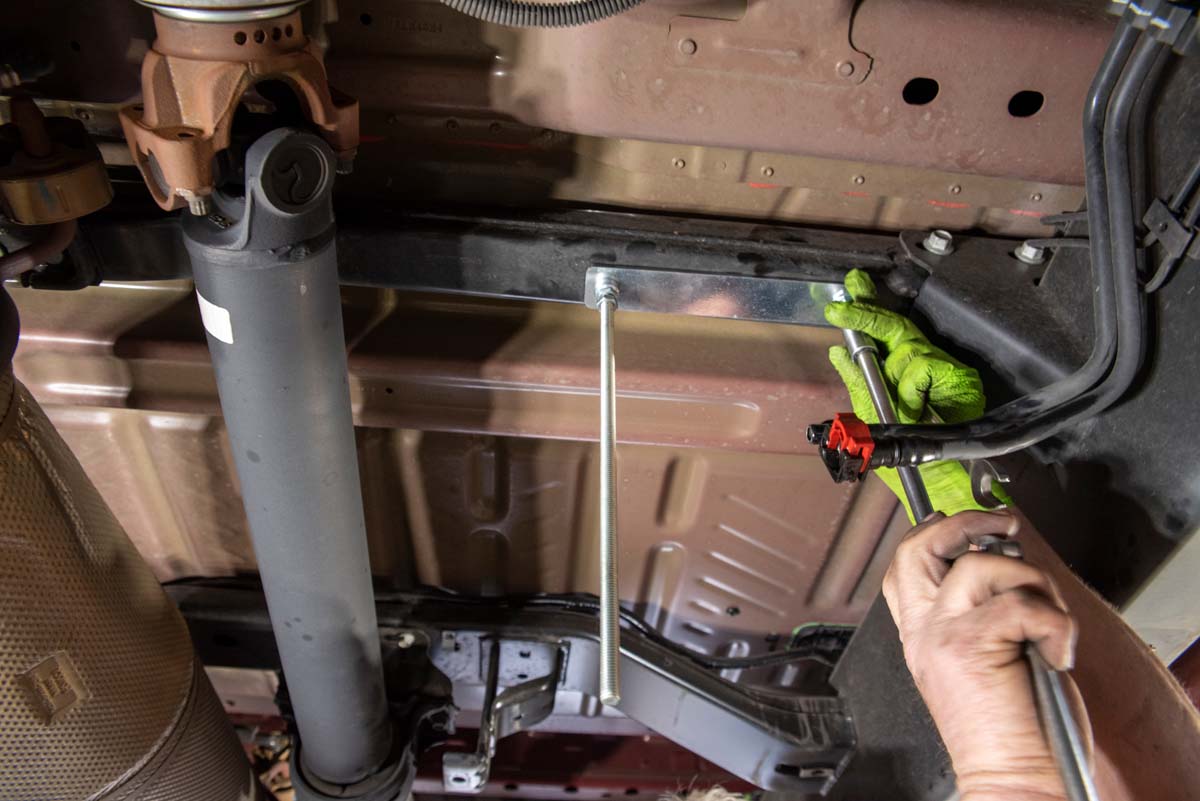 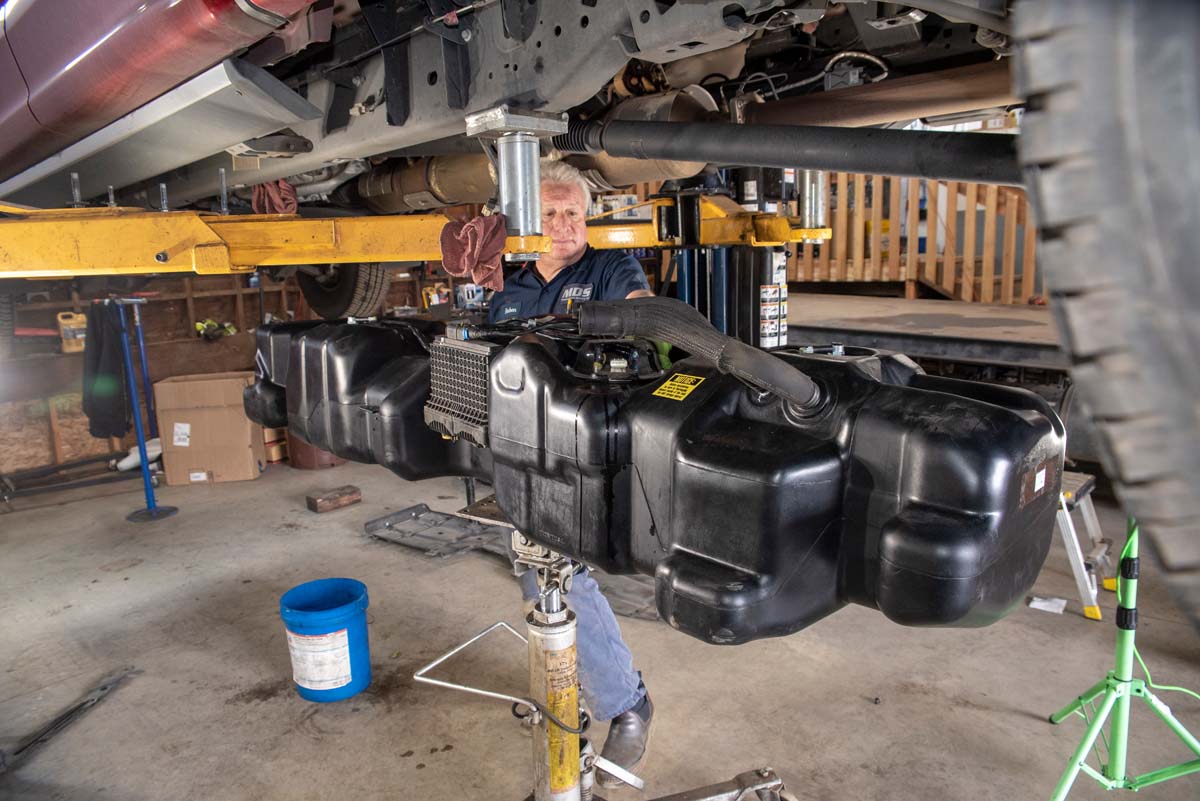 Step 18: A hole is molded in the big tank where the threaded rod can protrude to catch the new TITAN-supplied strap. 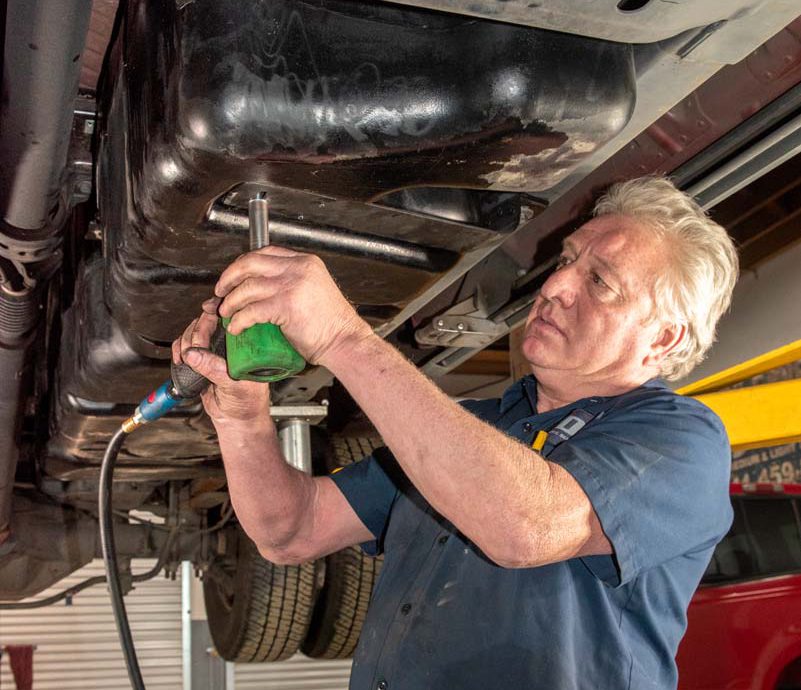 Notes: We replaced the broken OEM tank strap bolts and clips with comparable size Grade 5 bolts and locknuts. The TITAN Gen6 XXL fuel tank hangs about 2 inches lower than the factory fuel tank. We recommend installing an aftermarket skid plate if your truck is going to see any off-pavement use. The OEM skid plate doesn’t fit the TITAN fuel tank. 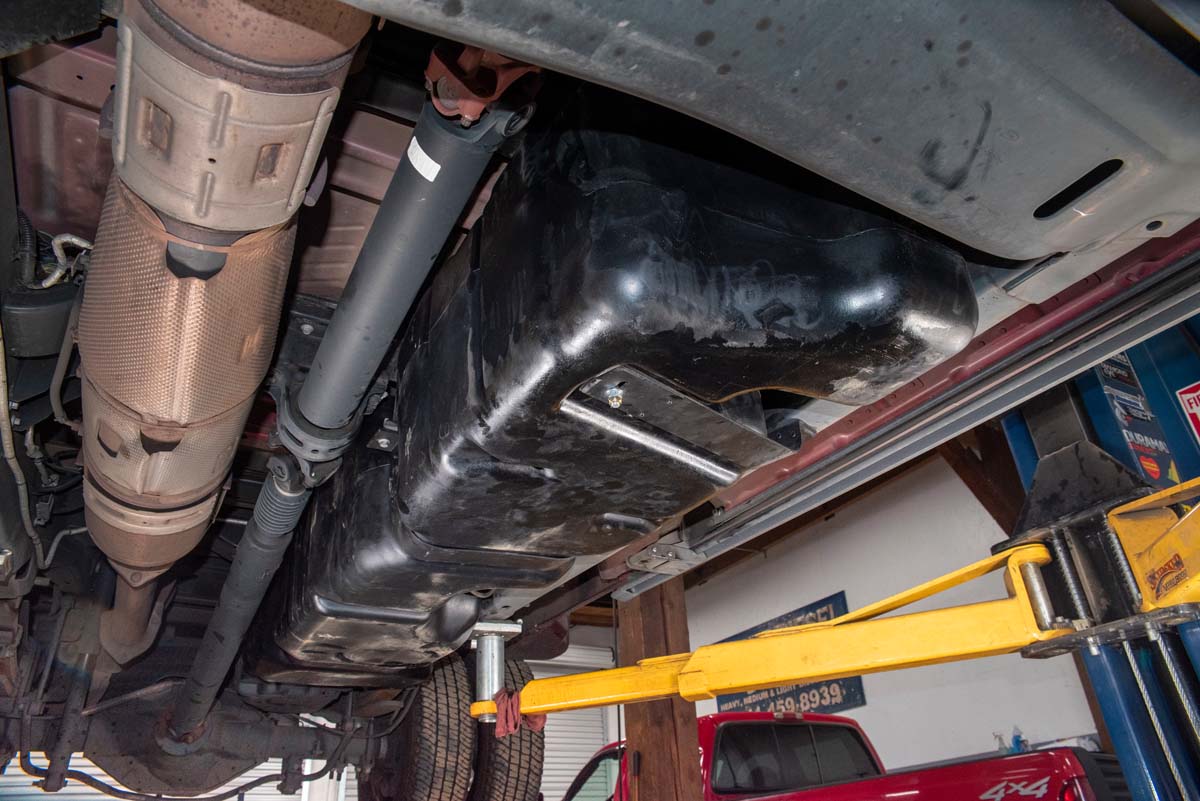 
The Amazing Toyota Series 76 6x6 Land Cruiser We Cannot Get
How to Pump Gas Properly: 5 Steps for Success
What is a Babbitt Bearing? (And 10 Steps to Pour Your Own)
The Best of 2021 Ford
The 9 Hottest Factory Built Car+Truck Mashups Ever Offered t...
The Best 2020 Cars Nissan Has to Offer