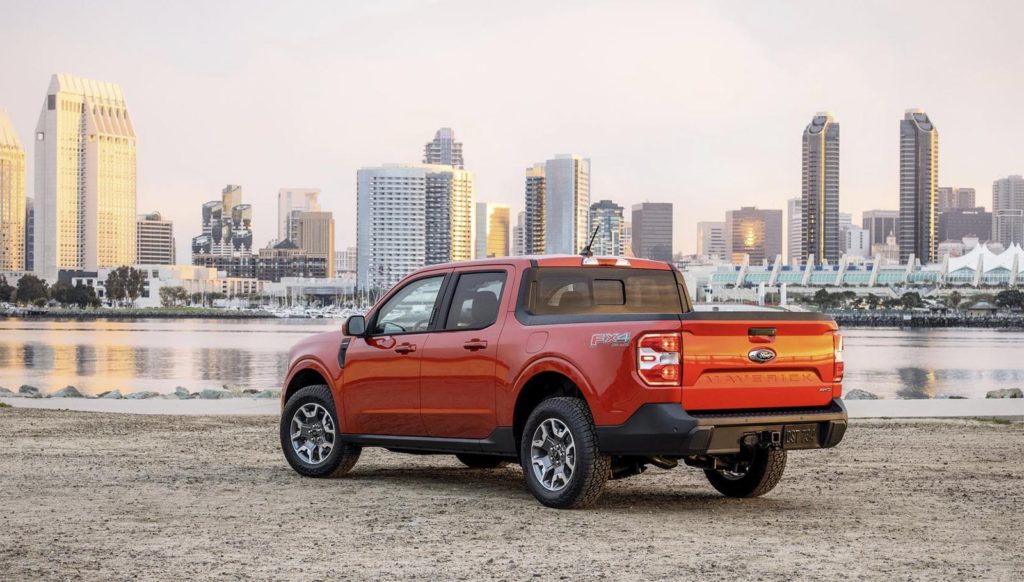 With its big F-Series line-up, Ford long has dominated the full-size and heavy-duty pickup market. Now, it’s determined to grab first-mover advantage as it targets a new truck segment that, today, exists only on paper. Enter the 2022 Ford Maverick.

The compact Ford Maverick making its official debut today takes aim at a very different buyer than products like the F-150 or midsize Ranger: hip, young urban buyers on a budget. It even starts out with a standard 40 mpg hybrid drivetrain that should appeal to environmentally-minded buyers who normally wouldn’t think of owning a pickup. But despite starting at less than $20,000, Ford claims, the new, 2022 Maverick offers the rugged capabilities long associated with its bigger trucks.

“Our target customer is certainly much more youthful, much more diverse, with more women, Hispanics and African-Americans, but there’s a consistent thread across all of our trucks,” said Trevor Scott, the marketing manager for both the Maverick and Ranger pickups, during a video background briefing.

Ford Maverick: Then and Now

The Maverick name might trigger a moment of deja vu. The badge was originally branded onto a two-door coupe – and, later, a four-door model — Ford sold between 1970 and 1977. Back then, there were plenty of small pickups on the market, as well, appealing to young Baby Boomers who sought products that were rugged, versatile, and affordable.

That market segment faded into oblivion as buyers shifted by the millions to full-size alternatives. But the ongoing revival of the midsize segment got Ford rethinking its option, especially as it realized it had an extremely capable platform to turn to. 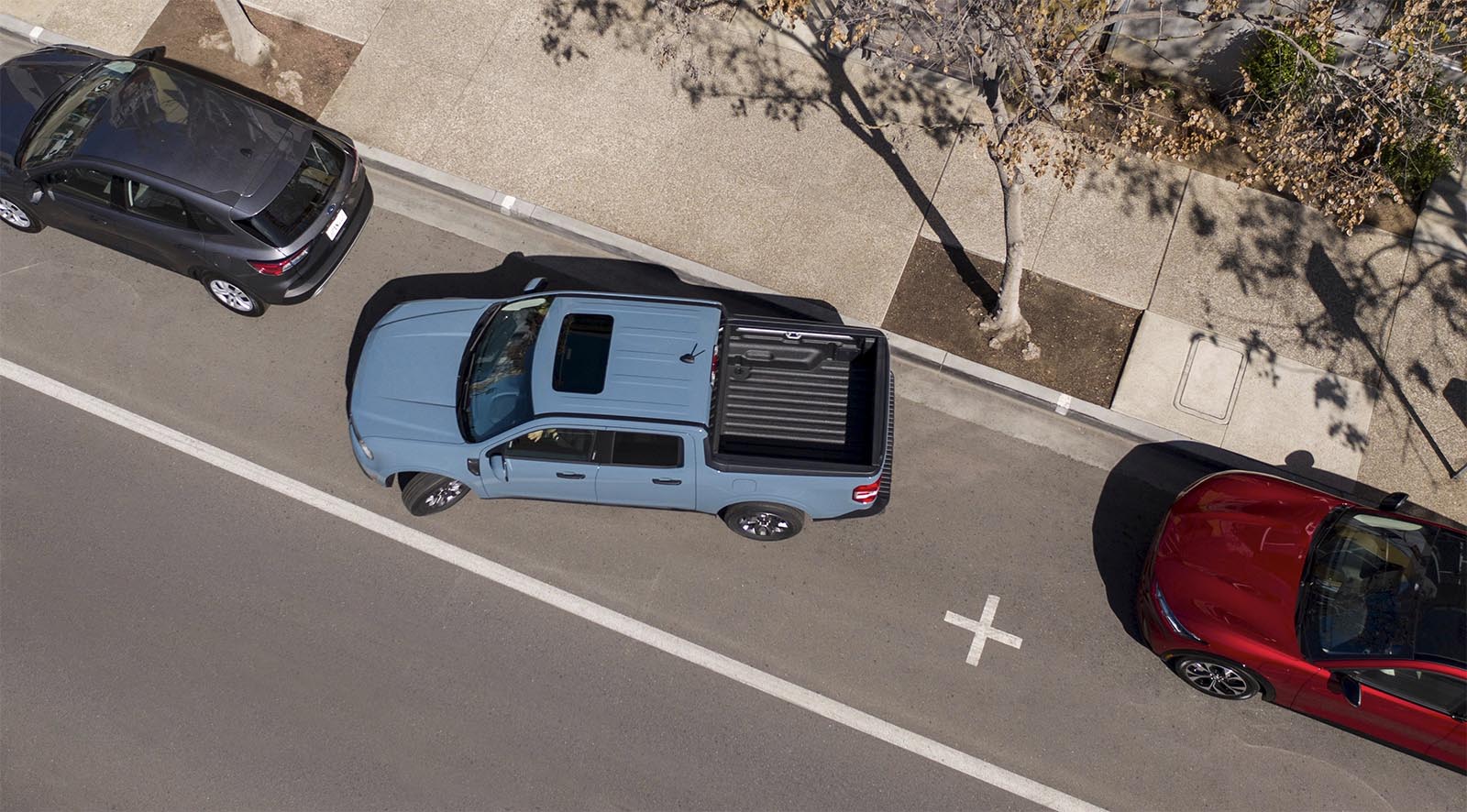 For the moment, at least, Maverick will be one of just three unibody trucks on the market. The other is the Honda Ridgeline, while Hyundai is also targeting the compact pickup segment with the upcoming, car-based Santa Cruz.

In Ford’s case, the new truck will share platforms with the Escape SUV, as well as the Bronco Sport. If anything, it appears to have more in common with the latter once you consider its capabilities. 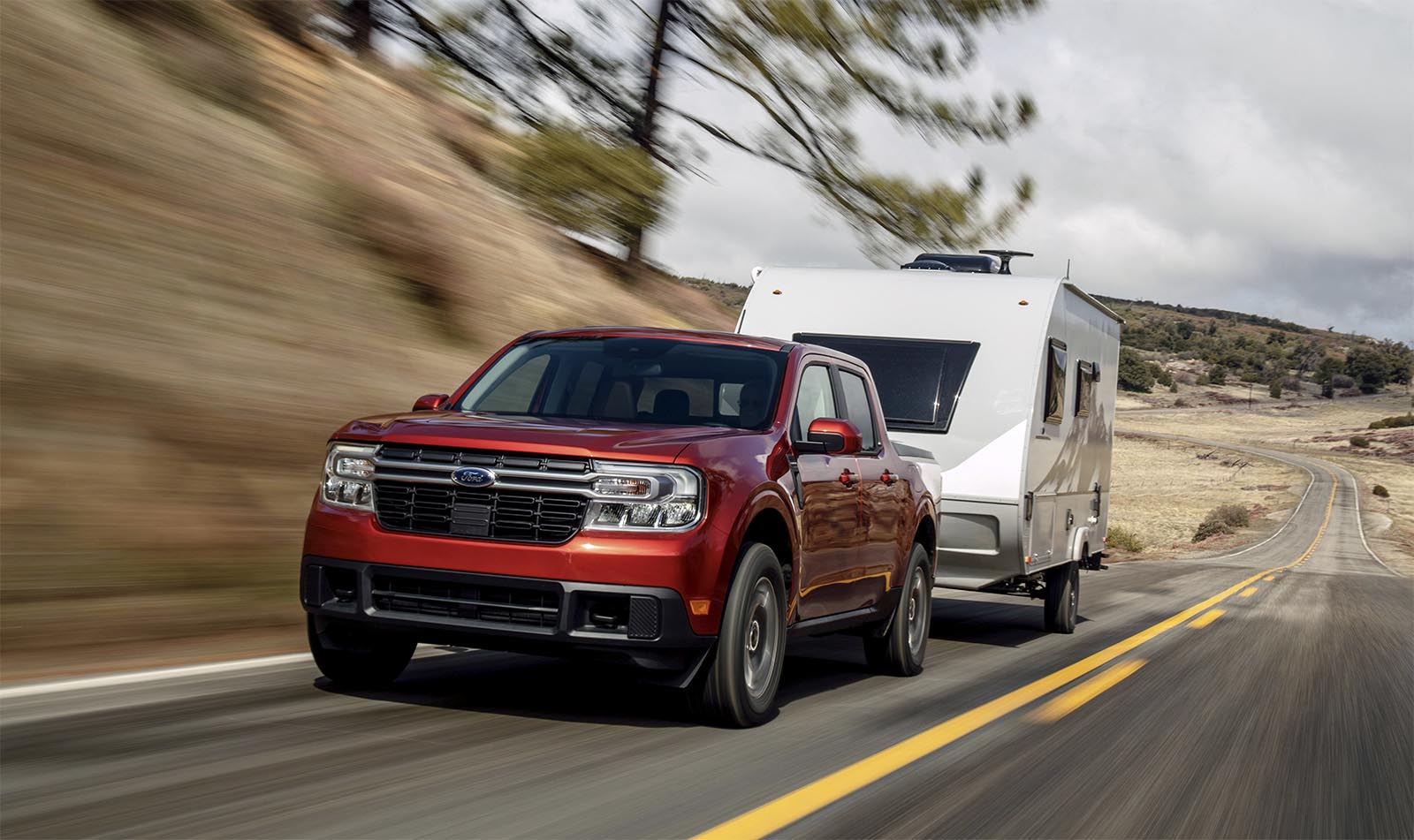 Even with the base, hybrid, Ford claims the 5-seat Maverick will be able to haul a 1,500-pound payload and tow up to 2,000 pounds. Opt for the turbocharged 2.0L Ecoboost-4 and you can haul around a trailer weighing in at 4,000 pounds. By comparison, the bigger Ranger’s tow rating runs anywhere from 3,500 to 7,500 pounds. 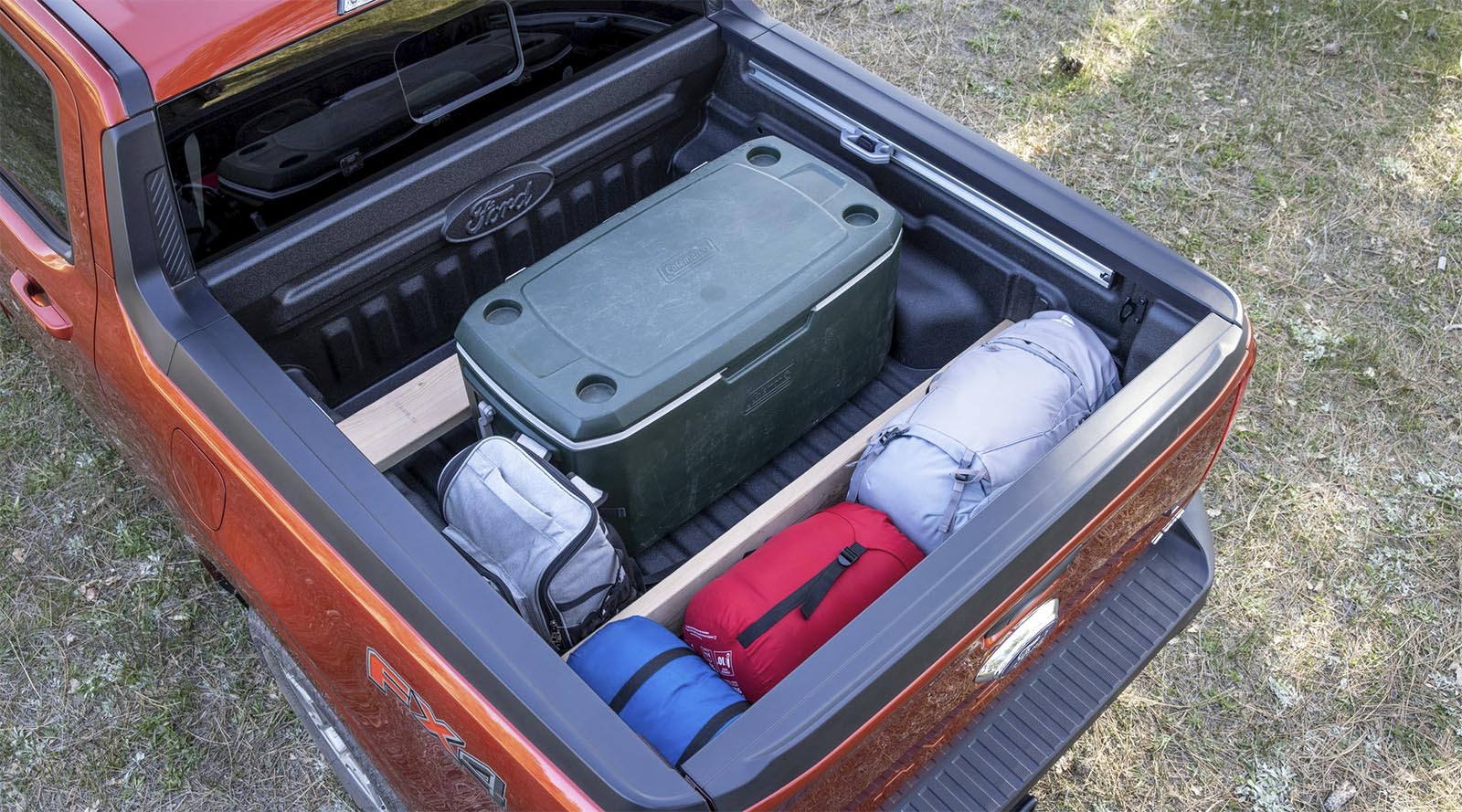 Maverick’s bed measures just 4.5-feet, a half-foot shorter than Ranger’s, but its multi-position design allows an owner to safely carry longer cargo, like as many as 18 sheets of ply or drywall – or a kayak. The bed also has slots so lumber can be used to subdivide it. There are a dozen anchor points and plenty of power points, including two optional 110-volt outlets. While Maverick owners might be less likely to use them on a construction site, they’ll do fine running a laptop or a 12v fridge for a tailgate party. 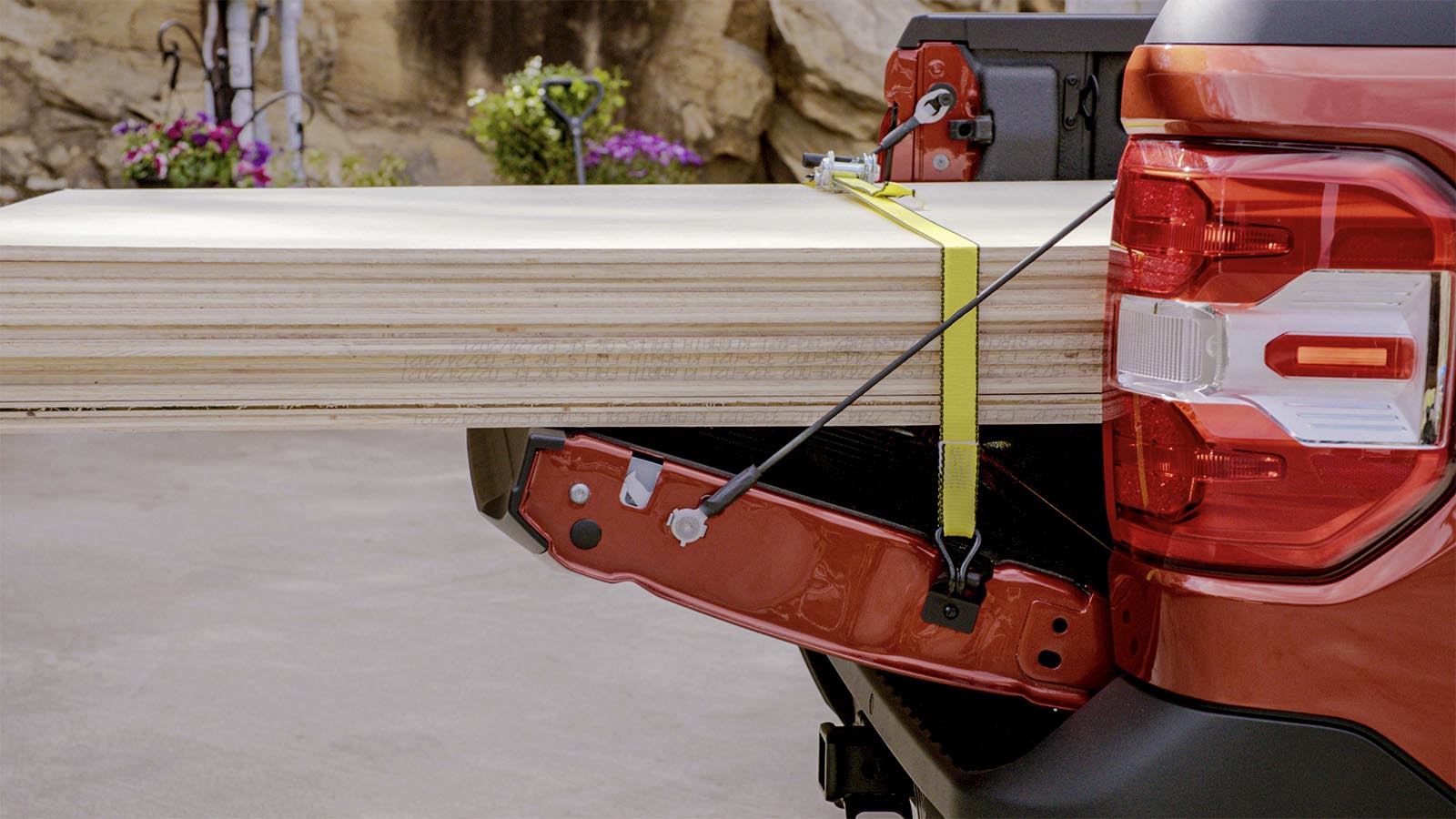 Maverick’s base engine is a hybrid – which pairs a 2.5L Atkinson Cycle gas engine with a 94-kilowatt electric motor. Together, they produce 191 hp. Fittingly, urban drivers will get an EPA-estimated 40 mpg in the city, with a combined rating of 40 mpg. The hybrid drivetrain is paired with a CVT gearbox and is available only in front-wheel-drive.

The new Ford truck offers an upgrade to a 2.0L Ecoboost engine, mated to an 8-speed automatic. This package punches the pony count up to 250, with torque rated at 277 lb.-ft. The turbo-4 can be ordered in either front or all-wheel-drive.

Three basic trim levels will be offered, the entry Maverick XL, mid-range XLT, and high-line Lariat. There are additional packages, such as the off-road-oriented FX4. And Maverick will be debut with a limited-run First Edition featuring niceties like unique 17-inch aluminum wheels with all-terrain tires, a folding tonneau cover, and a power tilt-slide moonroof. 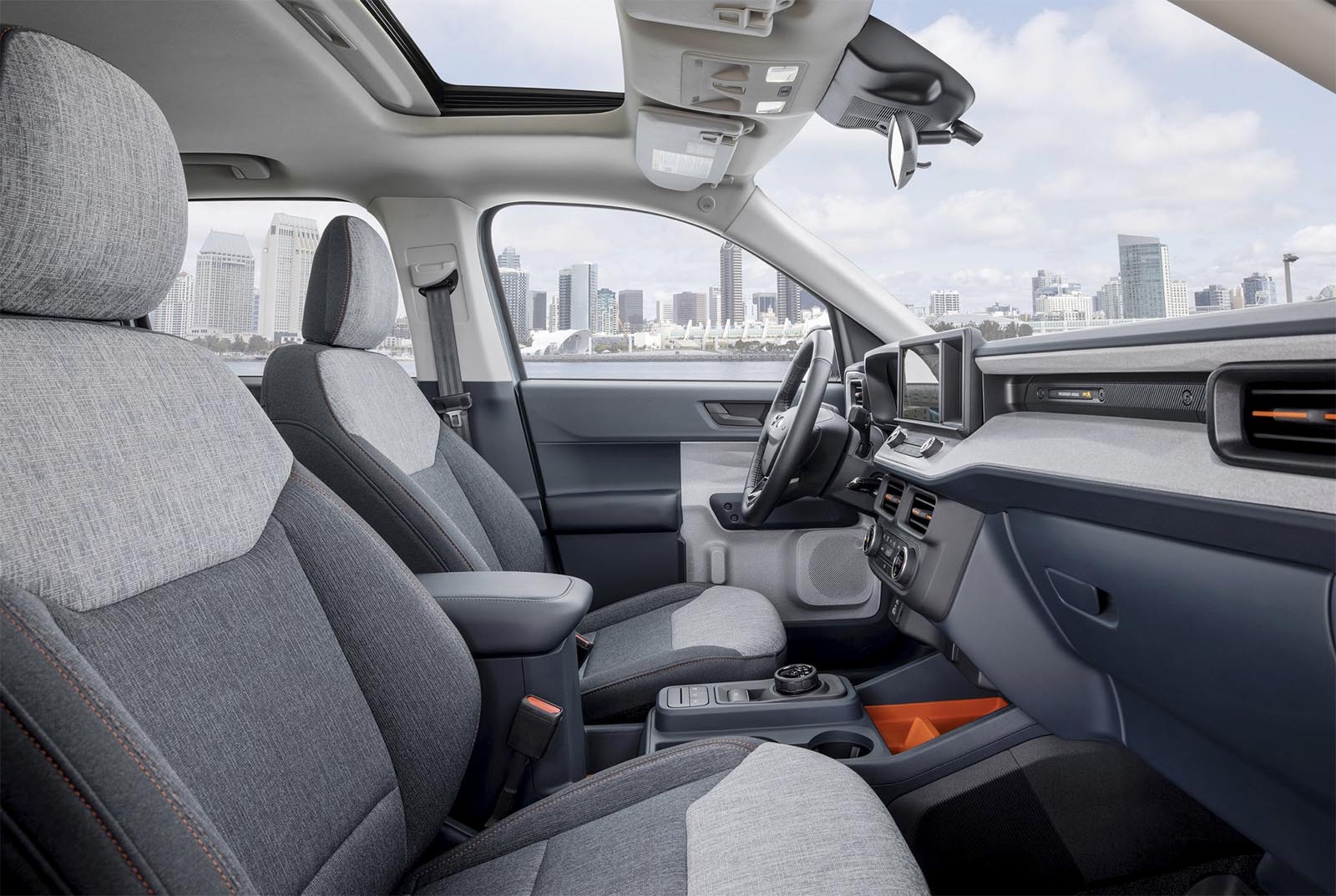 Despite its entry price, Ford appears to have taken pains to make sure even the base XL doesn’t look like the classic, stripped-down econobox. Among the more interesting features is a unique textured cabin finish that makes use of ground, recycled carbon fiber. The instrument panel features a stone-like finish meant to be as durable as a synthetic countertop. There’s also the flexible FITS, or Ford Integrated Tether System, to attach a variety of cabin accessories, including cupholders, a trash bin, and more. There’s also plenty of storage space around the cabin.

“This customer wants simple, but not basic, and Maverick is all about thoughtful details executed well,” said Barb Whalen, who led the team in choosing materials and colors. 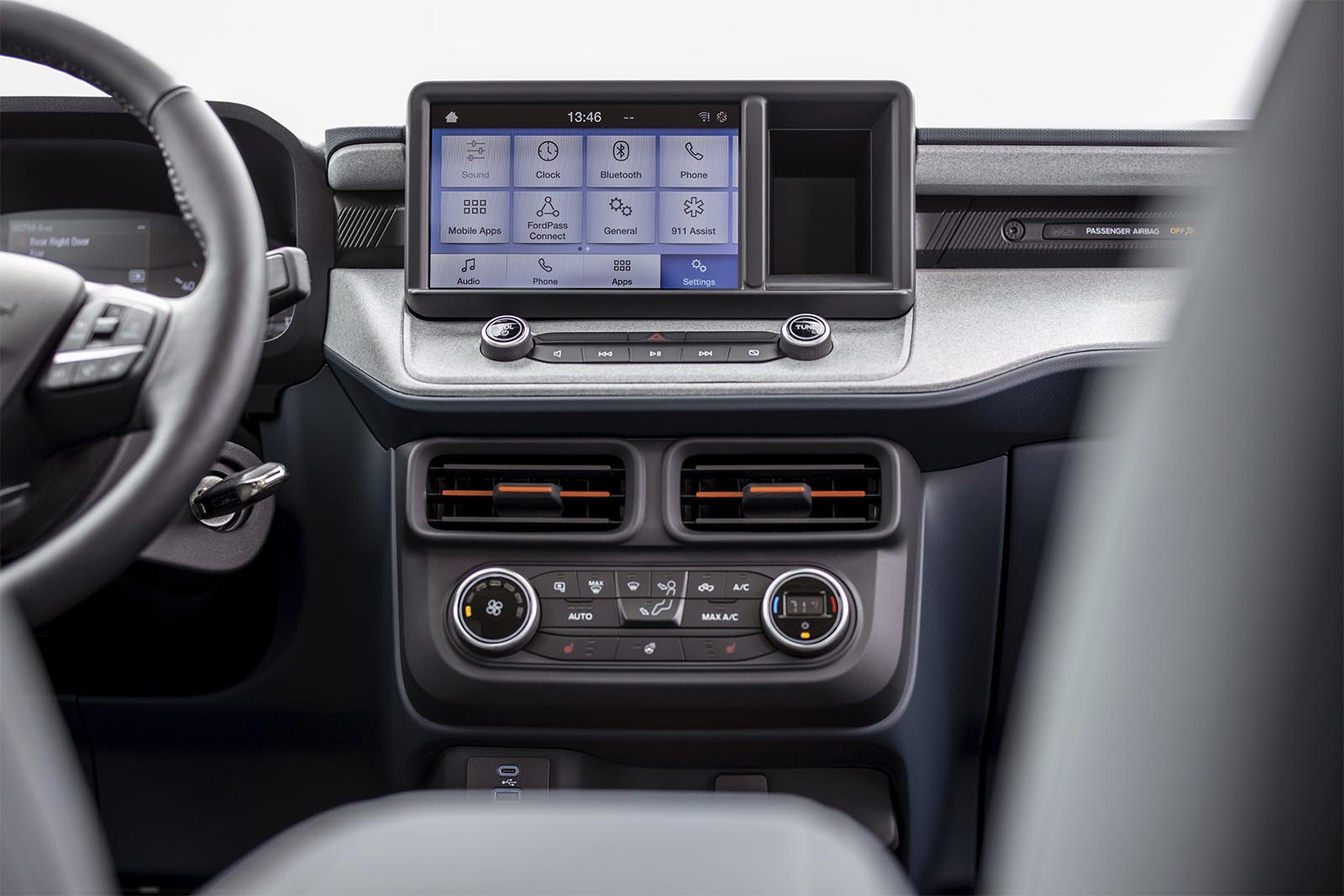 And, considering its tech-savvy target buyer, Maverick starts out with an 8-inch touchscreen that incorporates Apple CarPlay and Android Auto. It features FordPass Connect that can be used to remotely unlock doors, check fuel levels and perform other functions via a smartphone app. There’s also a WiFi hotspot for handling up to 10 different devices. 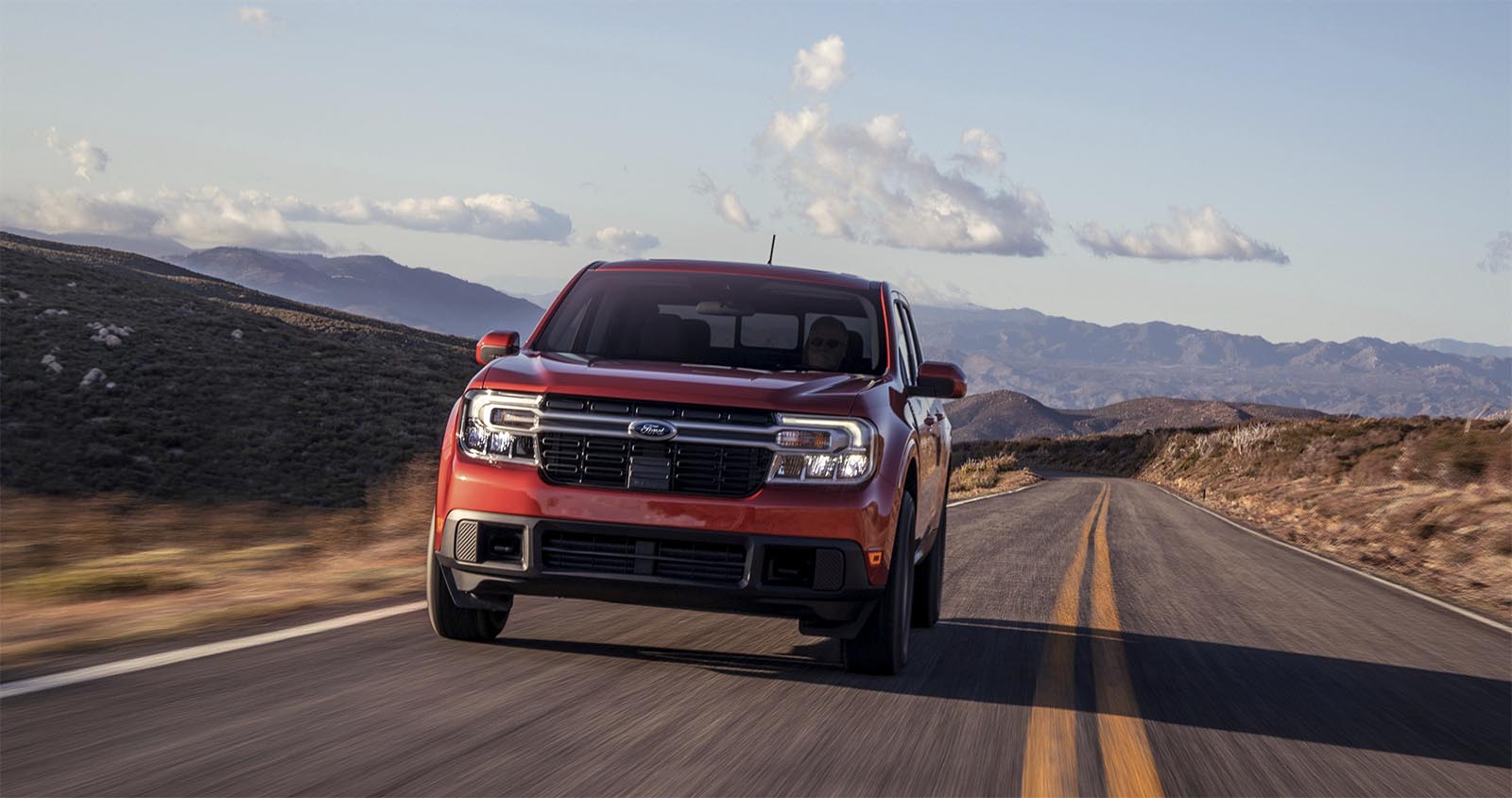 It remains to be seen whether there’ll be an audience for the new 2022 Ford Maverick pickup, though Stephanie Brinley, principal auto analyst with IHS Markit, believes “there’s some space for it.” And she notes that similar size trucks have found a solid market in Latin America.

For his part, Maverick marketing chief Trevor Scott sees a “tremendous opportunity” and the potential for a “real first-mover advantage” over other manufacturers who might come later to the U.S. compact pickup segment. Soon, it will be up to the market to decide if he’s right.

Look for the 2022 Ford Maverick to reach U.S. showrooms this coming Fall. The vehicle configurator is now live at Ford.com for the 2022 Maverick, and both orders and reservations can be placed today.


The 2015 Ford Bronco
8 Best Diesel Trucks You Can Buy & 4 Of The Worst
100 Years of the Lincoln Motor Company
Koenigsegg Agera RS Naraya With A Gold & Diamond Touch
Online Auto Auctions are Thriving During Pandemic
The 10 Best Selling American Cars in History And 25 Least Wa...