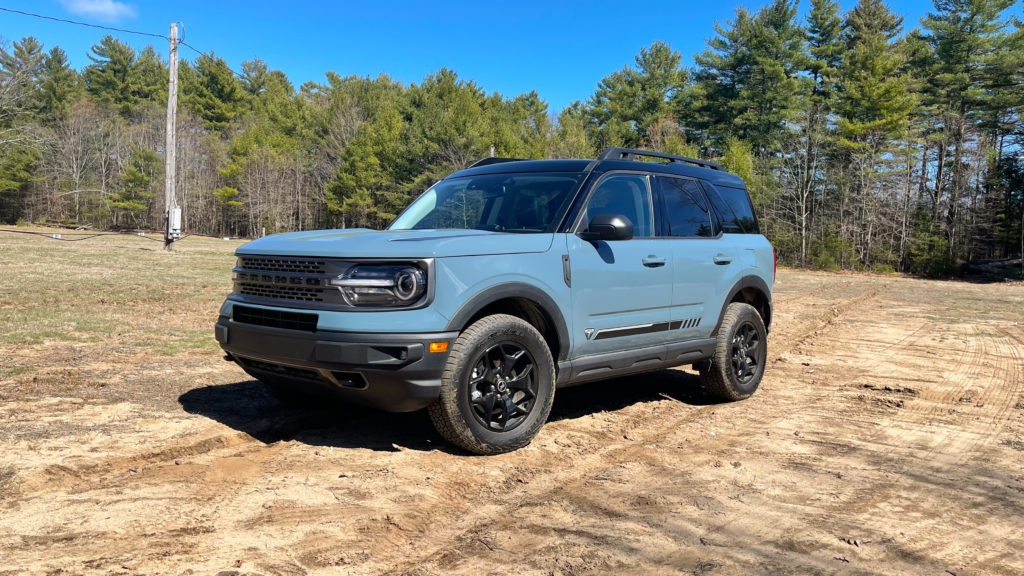 When Ford took to the virtual stage in mid-2020 to unveil the new Bronco and Bronco Sport, no one expected the number of “hardcore” features that the automaker would unleash in the smaller 2021 Bronco Sport model, including standard all-wheel drive, selectable terrain management modes, and two strong powertrain options. For the 2021 Ford Bronco Sport First Edition, all of those things added up, at least on paper, to a vehicle that should be more than happy to whip through the woods and head out on dusty desert trails.

I was skeptical. After all, how could an all-wheel-drive crossover that was based on the Ford Escape be any good on the trail? Nearing the end of a week spent with the 2021 Ford Bronco Sport, I realized how silly I’d been to doubt the capabilities of this decked-out crossover. 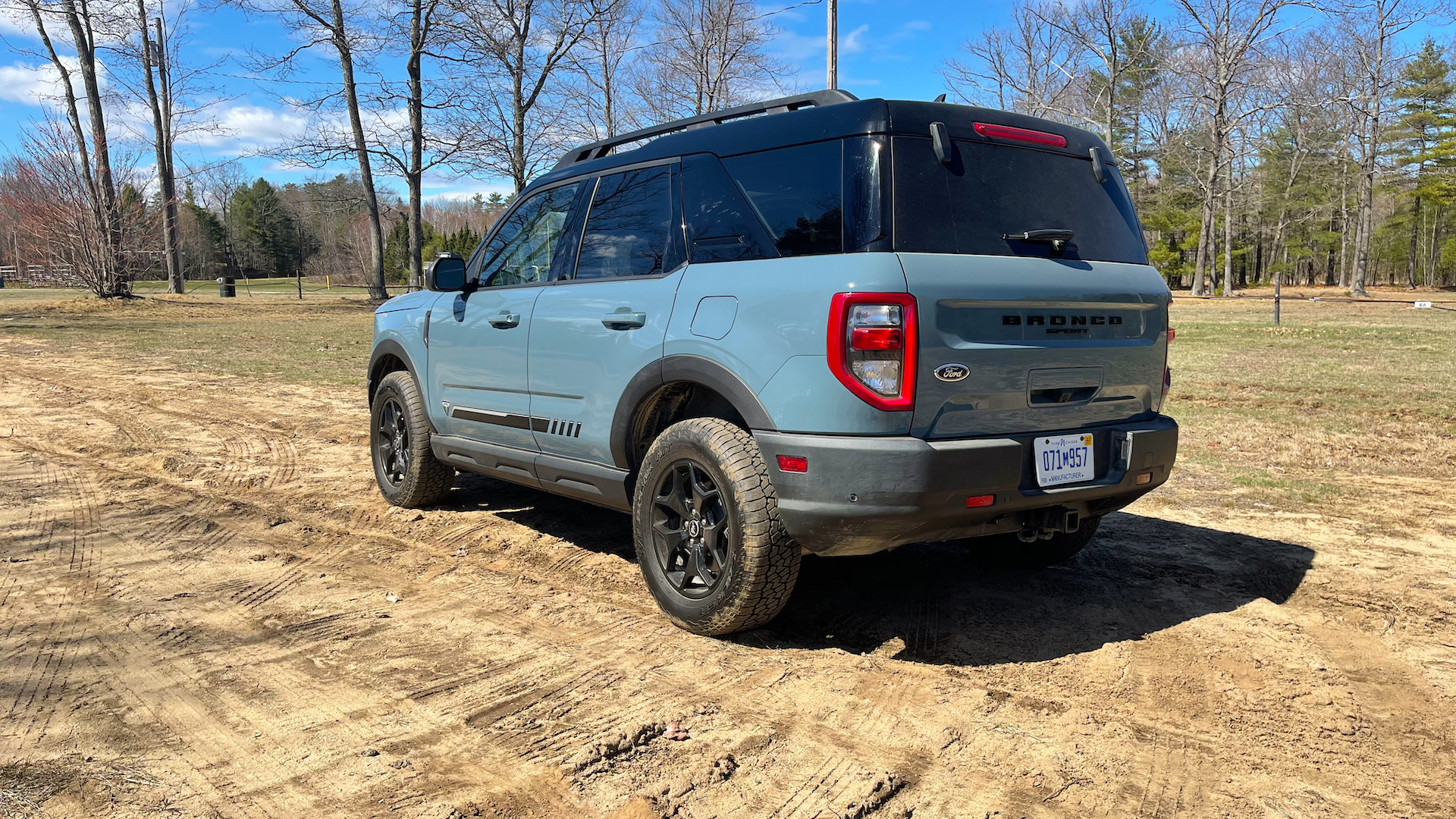 The base 3-cylinder powertrain for the 2021 Bronco Sport range sounds puny but delivers giggles with its somewhat rough, uncouth demeanor. With 181 hp and 190 lb.-ft. of torque, it’s got more than enough power, and its light, buzzy personality becomes endearing over time.

The 2.0L EcoBoost 4-cylinder in the 2021 Ford Bronco Sport First Edition, however, is a different story. It produces 245 hp and 275 lb.-ft. of torque and makes the Bronco Sport into something of a sleeper — that is to say, it’s quick.

That’s all great, but those powertrains are available in the road-going Ford Escape, so there’s nothing inherently special about them. It’s the Bronco Sport’s off-road driving modes and standard all-wheel-drive that push it into rarified air among compact crossovers.

Scoff at the off-road abilities of all-wheel drive all you want, but the available twin-clutch differential and selectable terrain management modes make the pint-sized Ford a force to be reckoned with.

On-Road Performance: Less Than Half The Picture 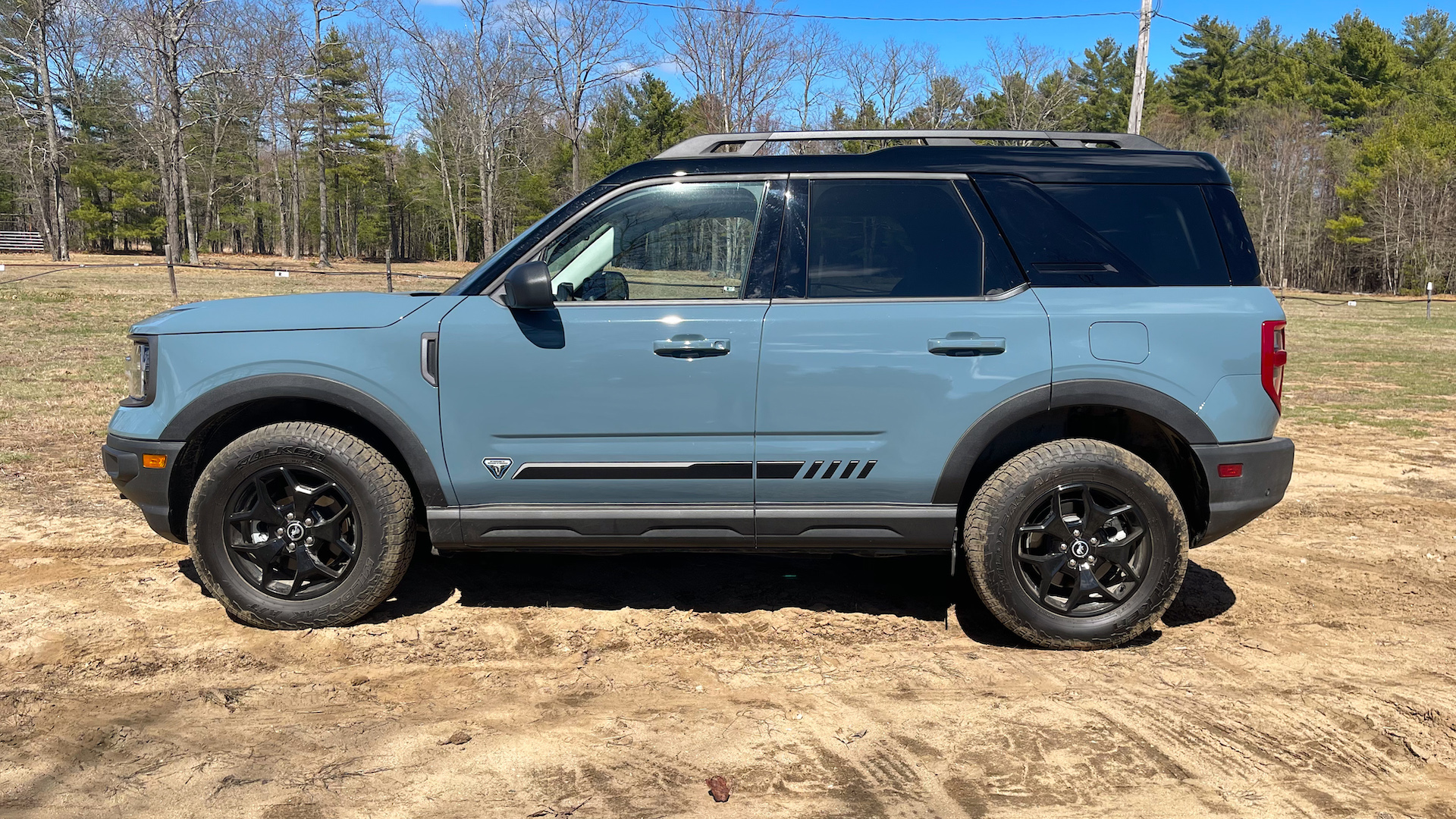 After a few days of putzing around town, I started wondering what all the fuss over this vehicle was about. The 2021 Ford Bronco Sport First Edition rides nicely on the streets and has plenty of power, thanks to the optional 4-cylinder engine, so wasn’t as if there was something particularly wrong from my vantage point behind the wheel. But just being fine wasn’t what I was expecting from the Ford. It wasn’t until I took it off-road that I finally understood what was what. I should have started the week off-road, because off the pavement is where the 2021 Bronco Sport comes alive.

The Bronco Sport made quick work of loose dirt, mud, and a moderately rocky trail, and came out the other side with a smile on its quirky little face. The electronic hand-holders in the traction control system give the driver enough wiggle room to act a fool in dirt and sand, allowing the vehicle’s tail to wag a little when asked. On top of that, the powerful 4-cylinder engine provides plenty of torque to get into and out of trouble without much, well, trouble. 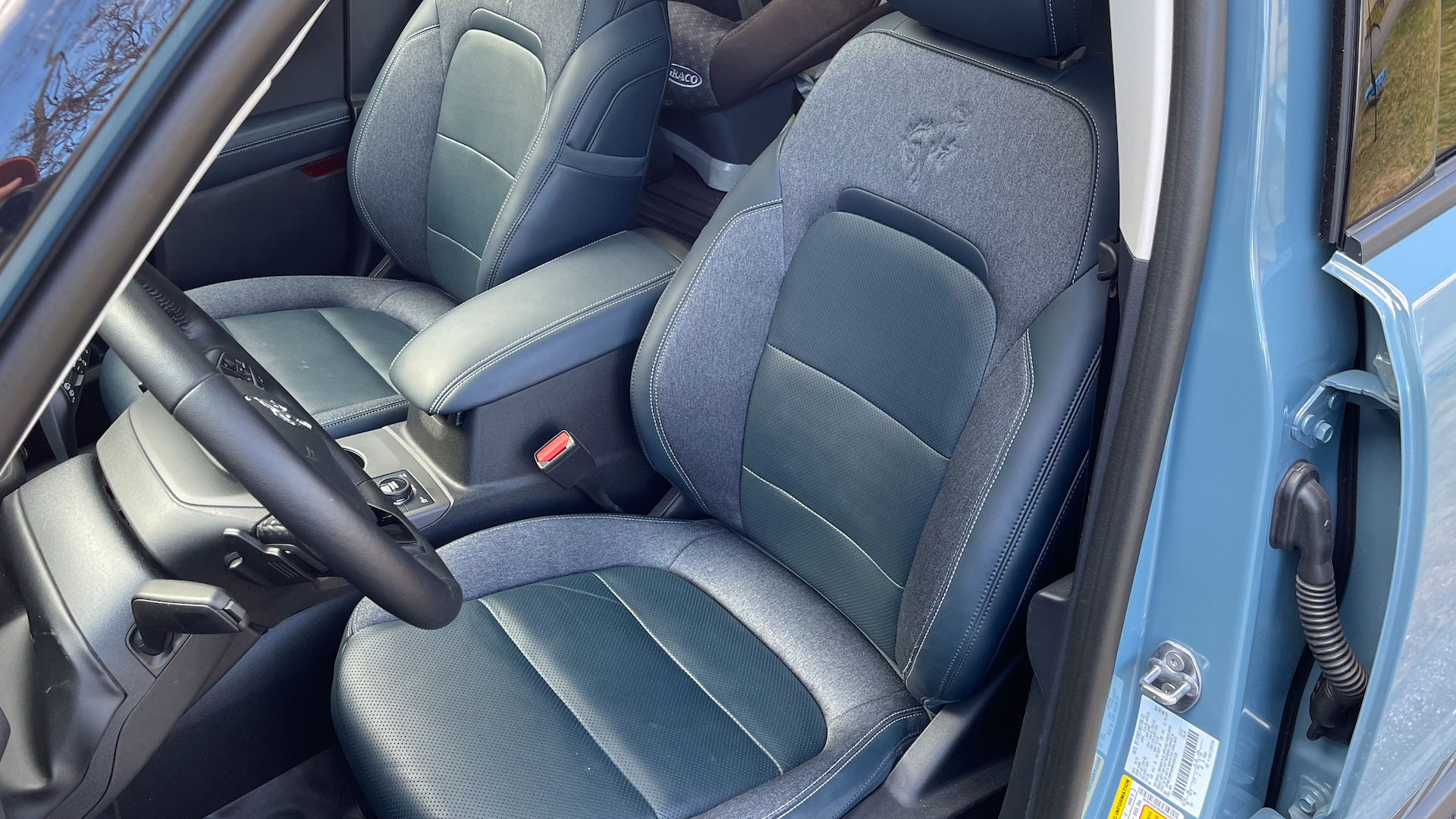 While the 2021 Ford Bronco Sport First Edition that I tested had soft navy leather, heated seats, and a heated steering wheel, the other Bronco Sport trims offer their own version of a rugged-but-comfy interior. The Outer Banks model, for example, gets sport seats with leather upholstery and heating functions.

With seating for five, the Bronco Sport’s upright, boxy shape affords 41.5 inches of headroom up front and 41.7 in the rear. That creates an airy, open cabin that is as spacious as it feels. 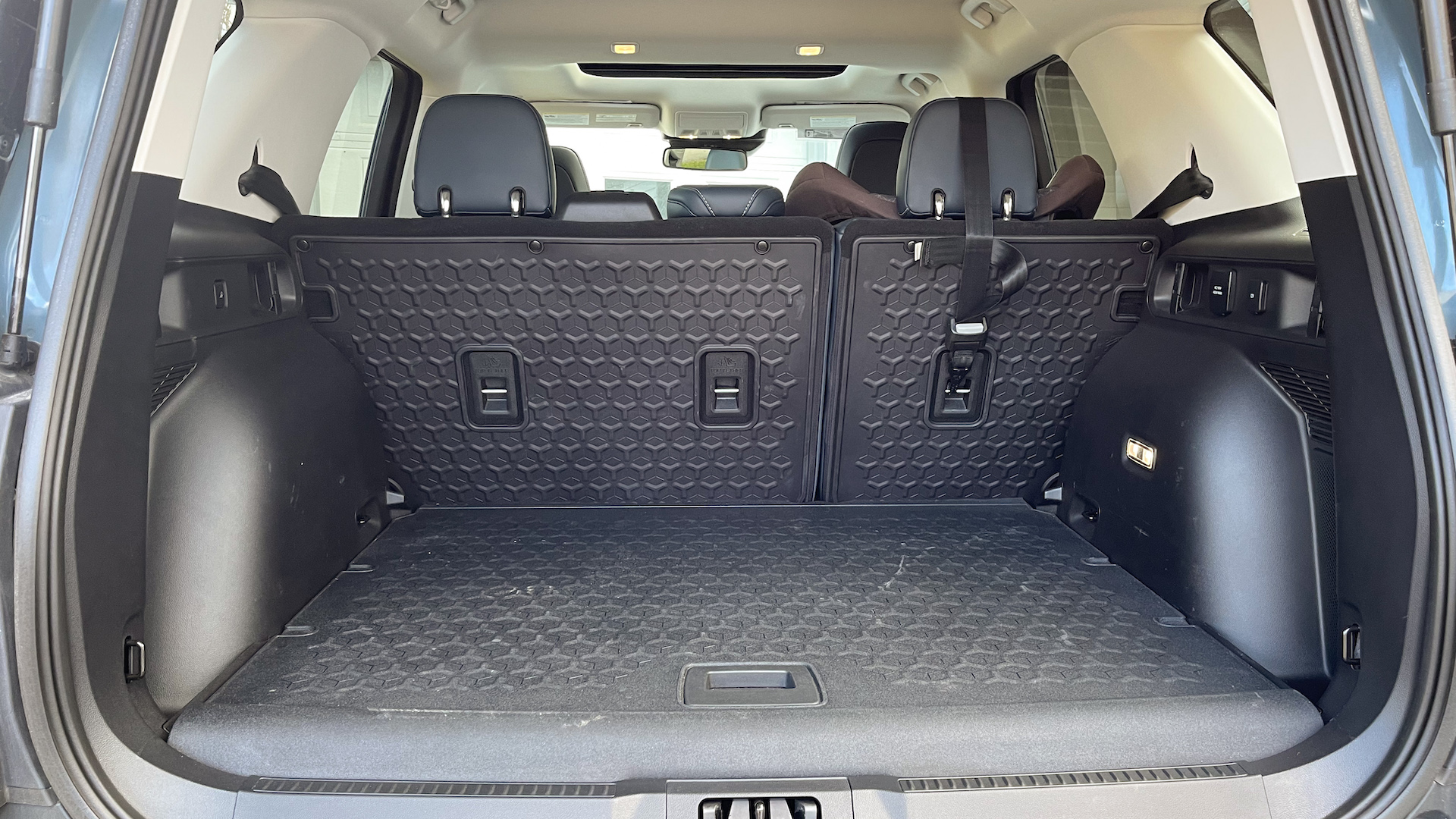 Cargo space is ample but lags behind the Bronco Sport’s competitors. With the rear seats upright, the Bronco Sport offers 32 cubic feet of cargo space. This can be expanded to 65 cubic feet with the rear seats folded down. Ford makes the space more usable with cleverly placed cargo tie-downs and standard LED lights that you can move to can illuminate either the inside of the cargo area or the ground around the vehicle. 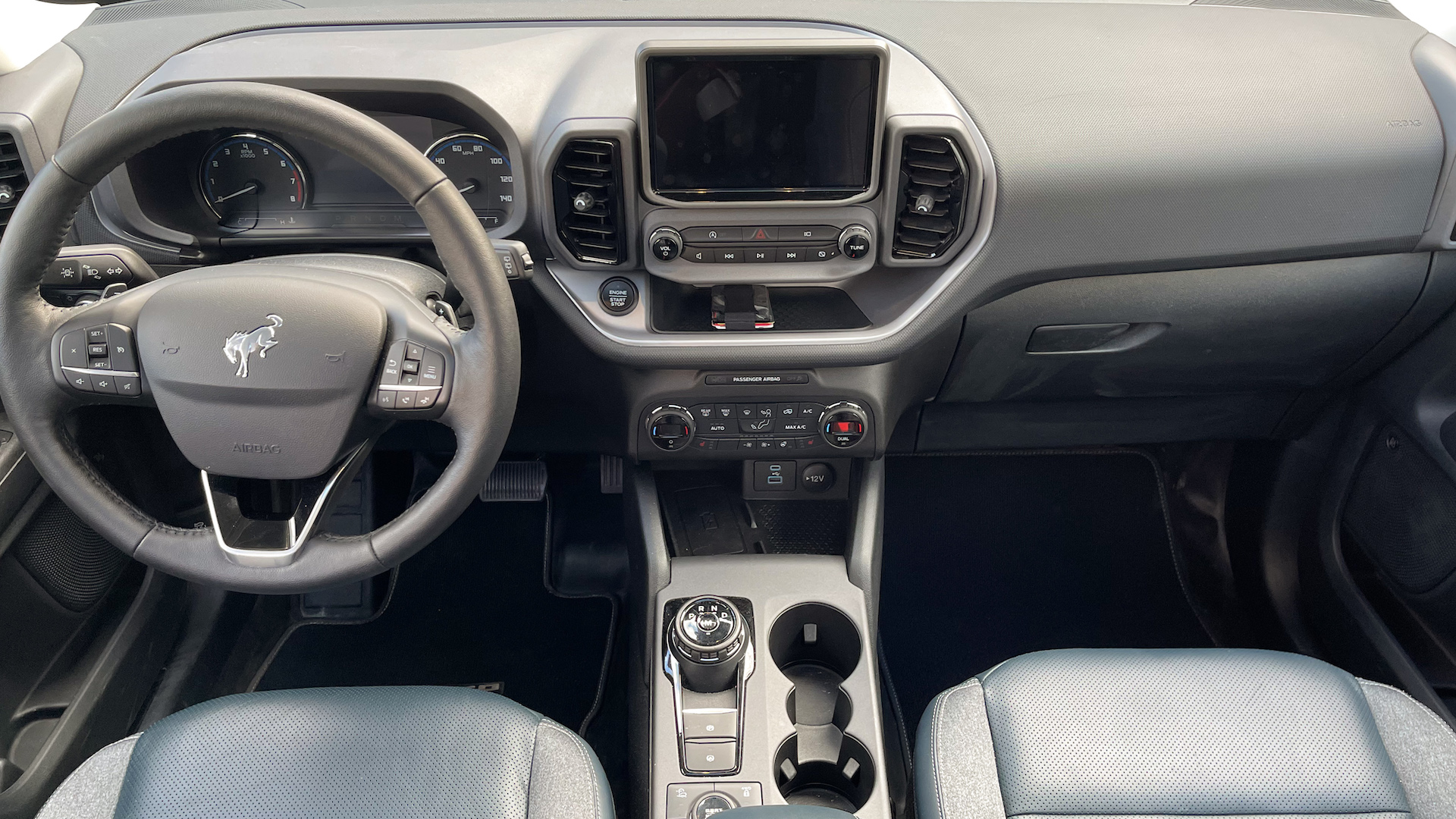 The 2021 Ford Bronco Sport First Edition comes equipped with a bright and responsive 8.0-inch touchscreen mounted atop the center stack. It runs Ford’s SYNC 3 infotainment software flawlessly. The colorful software is among the best in the industry, and I learned it quickly without much hassle.

My First Edition tester also came with an upgraded B&O audio system. However, the stereo that comes with the base trim package will be plenty for most people. Apple CarPlay and Android Auto are standard for every Bronco Sport as well.

On the safety front, Ford equips every Bronco Sport with blind-spot monitoring, a lane-keeping system, pre-collision assist with automatic emergency braking, and LED headlights. The Bronco Sport hasn’t been crashed by either major safety testing agency yet, so official safety and crash test ratings are still forthcoming. 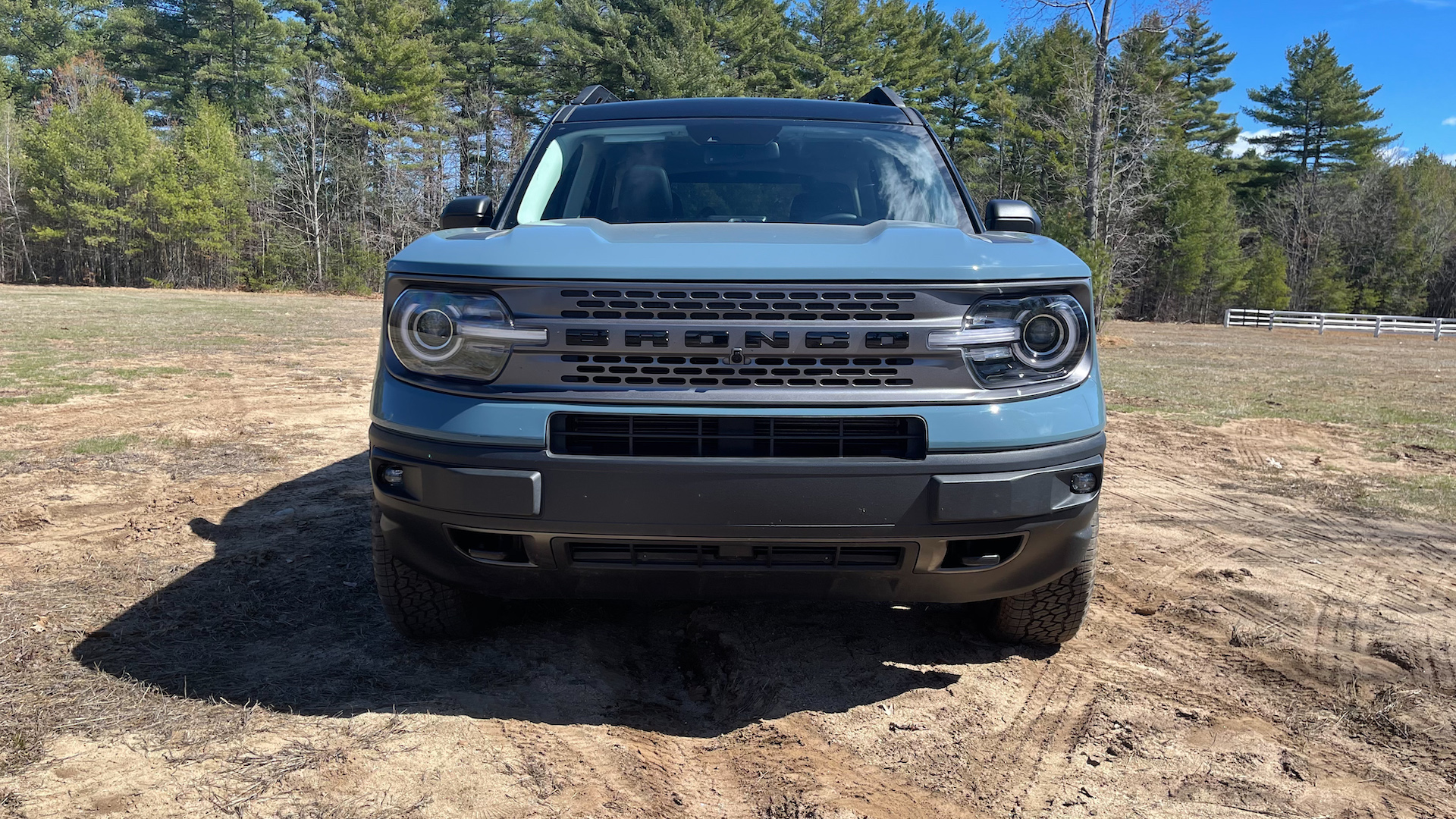 Since the “big-boy” Bronco has experienced multiple delays that continue to push its release further into 2021 (most probably into 2022), impatient buyers are left with the smaller Bronco Sport. Like its elusive counterpart, the Sport can be ordered in several trims, each with a unique name.

Also, like the Bronco, the Sport was offered in a limited-run First Edition model at launch, which quickly sold out. My test vehicle was a First Edition model with a price tag of $39,655. Though the First Edition is now unobtainable, you can still get some of its features in one of the other four trim levels: Base, Big Bend, Outer Banks, and Badlands.

Viewed on its own, the 2021 Ford Bronco Sport is a compelling vehicle with a starting price tag that won’t kill your bank account. The $28,315 base MSRP is reasonable, and even the top Badlands model lands at just $34,315. The full-sized Bronco starts at around the same price actually, but quickly climbs from there, reaching over $50,000 quite easily.

If you want to wait for the larger Bronco, go ahead, but you can’t use the Bronco Sport’s lack of capability as an excuse. The vehicle offers far more capability than most people will ever need or use, so the purchase of the full-on Bronco isn’t necessary for a large portion of the car-buying public.

Personally, I’d take the Bronco Sport and spend the rest of my money planning an off-road adventure somewhere far, far away from screens and emails. I think you should too.

Build out your own Bronco HERE.