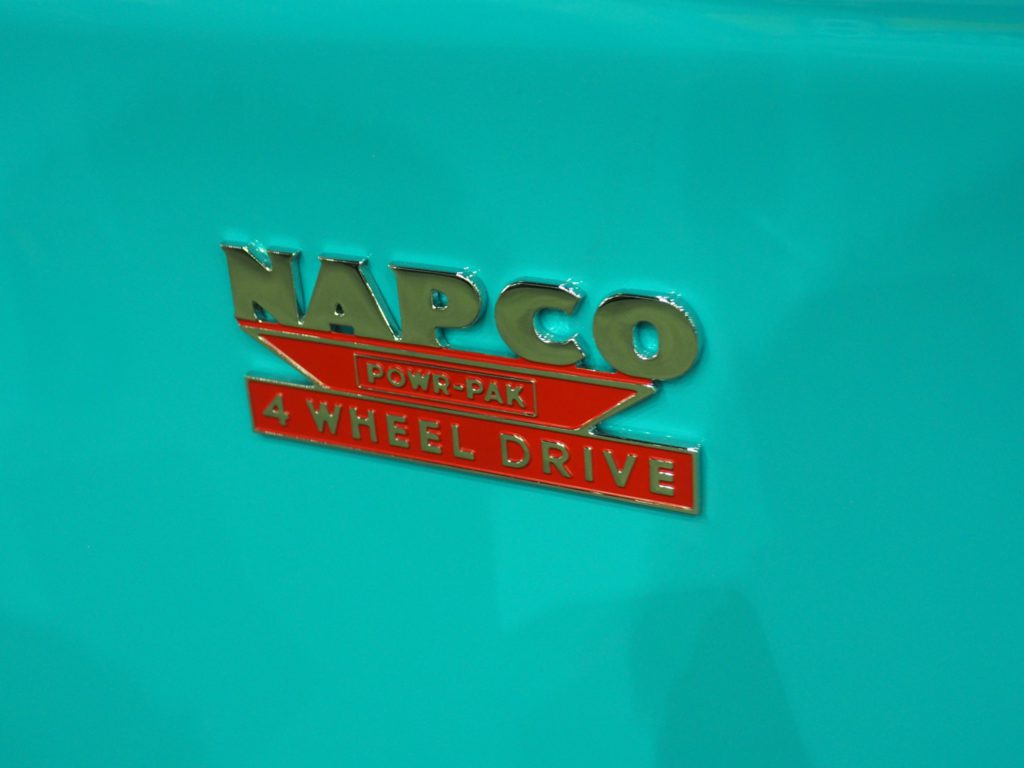 The NAPCO 4X4 Powr-Pak Conversion was a big deal for off-road enthusiasts in the 1950s. After WWII the big three automakers didn’t offer a 4X4 version in their truck lineups. Many veterans saw the versatility and usefulness of a four-wheel-drive Jeep while overseas and wanted the same in their civilian trucks. Enthusiasts turned to the NAPCO 4X4 transfer kits, which bolted onto their factory truck chassis and quickly converted their trucks into 4×4 monsters.

With a NAPCO unit, trucks now could venture out into the wilds. NAPCO 4X4 trucks allowed a new way of traveling and exploring the backwoods of America. 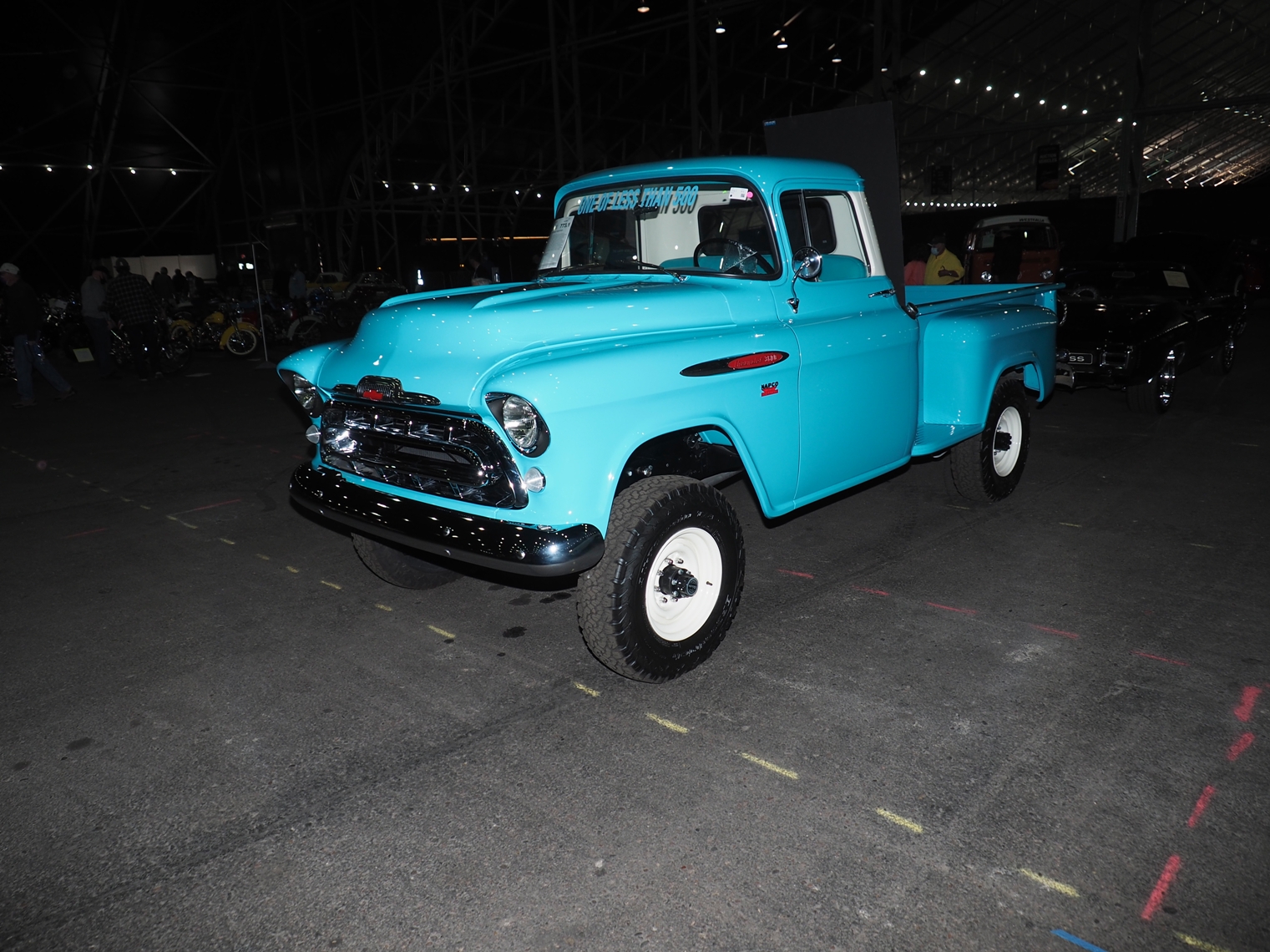 While 4X4s might seem to be a popular truck and SUV style these days, they were generally unheard of until after World War II. Ford had offered a unit through an upfitter, Marmom-Herrington, since the 1930s, but it was an expensive and time-consuming effort resulting in few conversions.

Manufacturers were already challenged to make reliable, long-lasting work trucks and hadn’t seen the market or demand for four-wheel-drive trucks. When servicemen returned home after driving Jeeps in World War II, the demand grew for something similar for the domestic market, and NAPCO – Northwest Auto Parts Company – was a natural fit.

NAPCO was an industrial parts manufacturing company and during the war produced specialized parts for the war effort. The firm switched gears after the war and produced peacetime machinery including the NAPCO Powr-Pak 4X4 Conversion. The kits were available for Ford, Dodge, and Studebaker, but the biggest sales revolved around GMC and Chevrolet trucks. 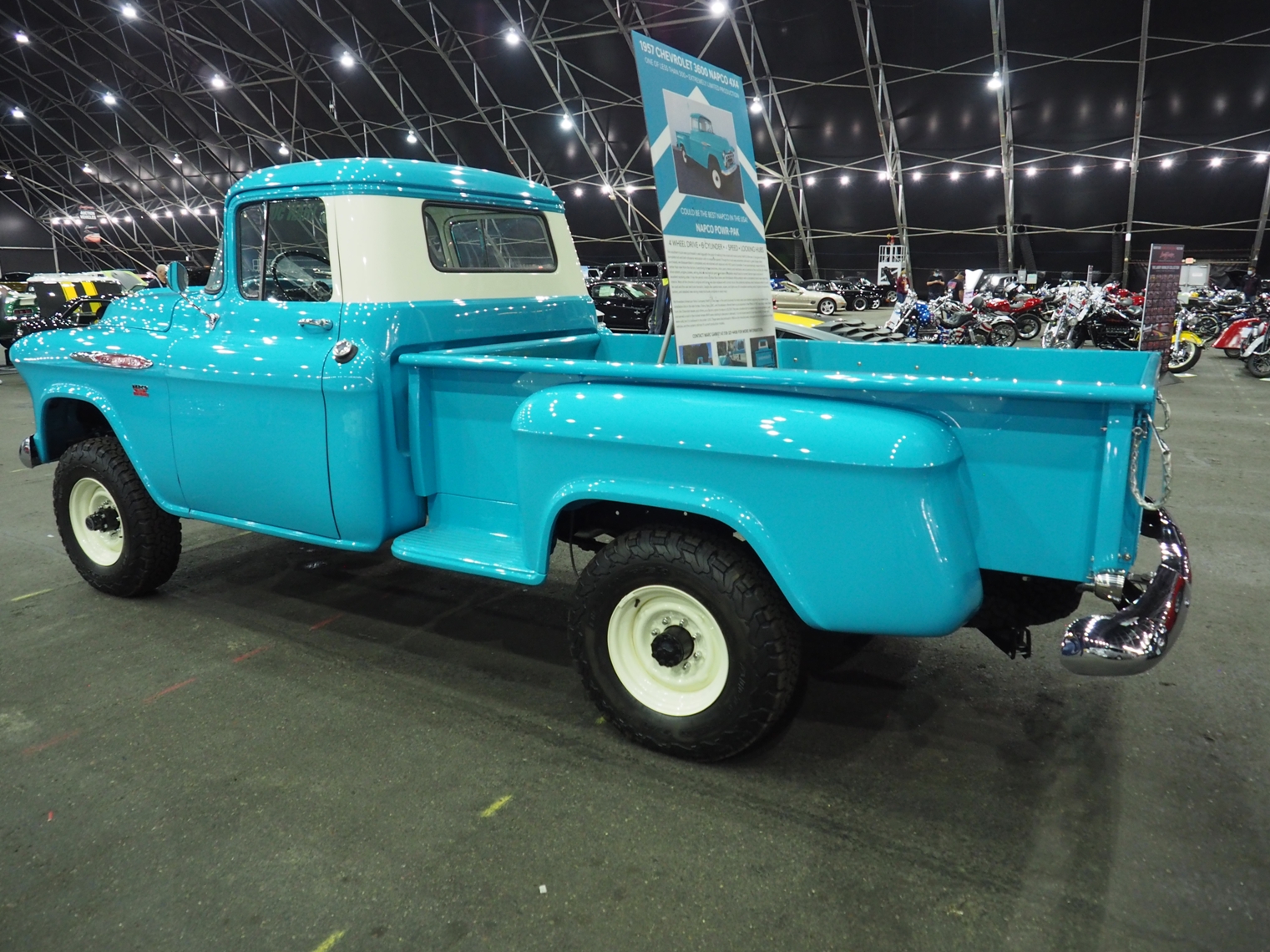 Owners would buy a two-wheel-drive truck and then order the Powr-Pak kit separately. They then could either have a dealer install the conversion or do it themselves. Because the kit was well designed and made for these specific trucks, installation could be done in 3-hours with minimal changes to the truck’s chassis.

One of NAPCO’s selling points was that an owner could take off the kit, return the truck to a two-wheel-drive status, and re-use the kit on another truck from the same manufacturer. 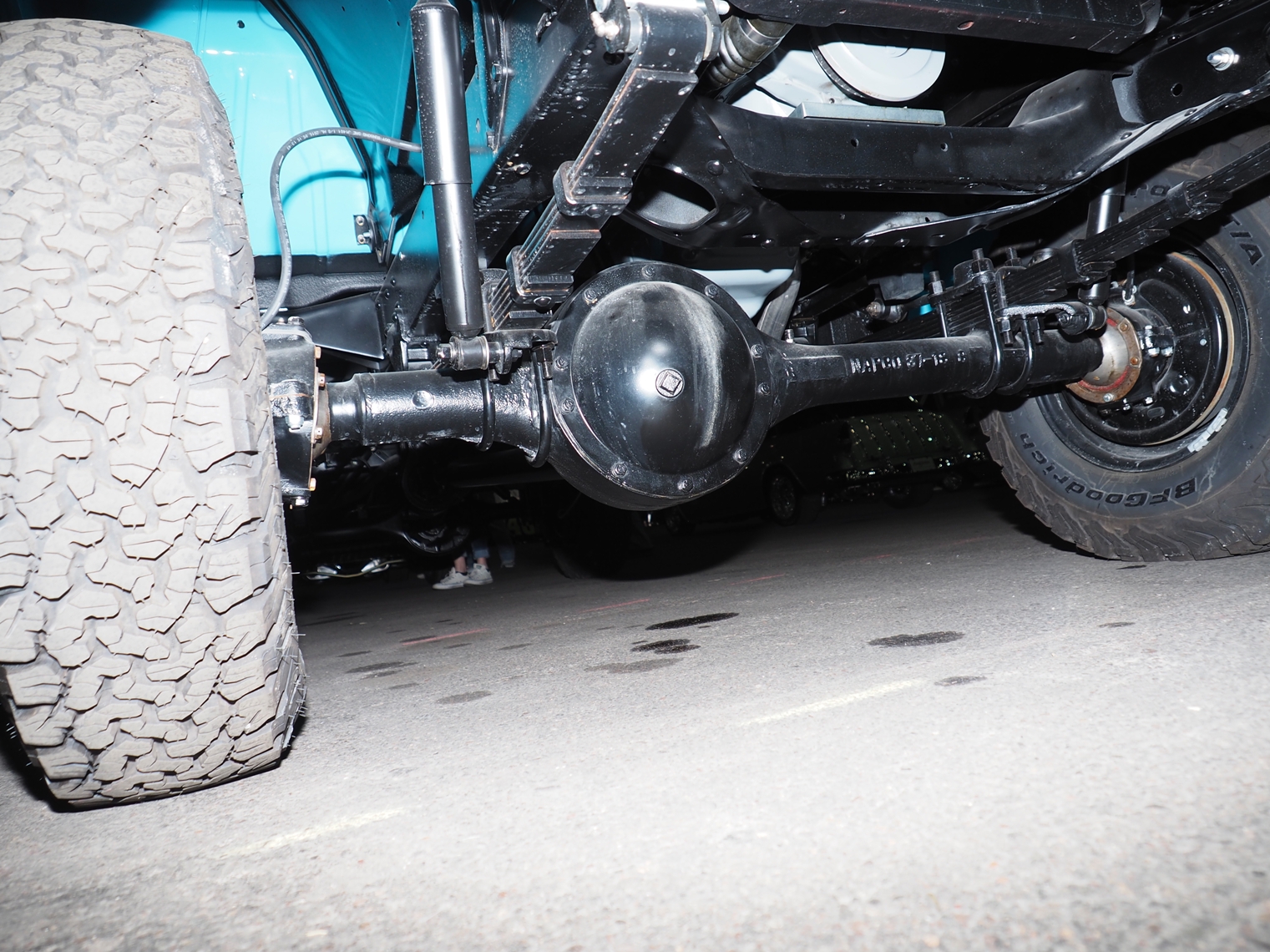 Initially, the kits were only installed for Chevrolet and GMC in 3/4 ton and larger trucks, as the drive trains in those trucks accommodated the conversion. Earlier 1/2 ton trucks had an enclosed torque-tube driveshaft design that would not work with the conversion kit. In 1955 1/2 ton Chevy and GMC trucks drive trains changed to match their beefier cousins and the NAPCO kits then easily fit.

Later NAPCO would reach an agreement with both GMC and Chevrolet to have the conversion kits installed at the factory, which reduced the purchase price and increased the number of sales by the dealerships. The parts for the conversion kit were predominantly GM parts which allowed for ease of installation and replacement parts as needed. The Powr-Pak Conversion kit offered a PTO (Power Take Off) option for farm machinery or other gear, and a rubber-mounted transfer case for a smoother ride. NAPCO also offered an assortment of winches, auxiliary transmissions, and other truck parts for the industry and end-user.

All this changed in 1960 when both GMC and Chevrolet changed their truck chassis to include independent front suspension and offered a factory-designed 4X4 option. Since the NAPCO Powr-Pak kit would no longer fit the newer models, and an OEM 4×4 option was readily available, demand plummeted overnight.

Record-keeping was never precise with NAPCO and the exact number of conversion kits sold for all the brands is uncertain, but is thought to be under 2,000.

Eventually, NAPCO was bought by the DANA Corporation, which originally produced the transfer case for the NAPCO 4×4 conversion kits. Dana is of course best known today for its axles, found in both OEM vehicle and hardcore aftermarket off-road vehicle builds. Later renamed NAPCO International, the company still produces parts and equipment for the military today. 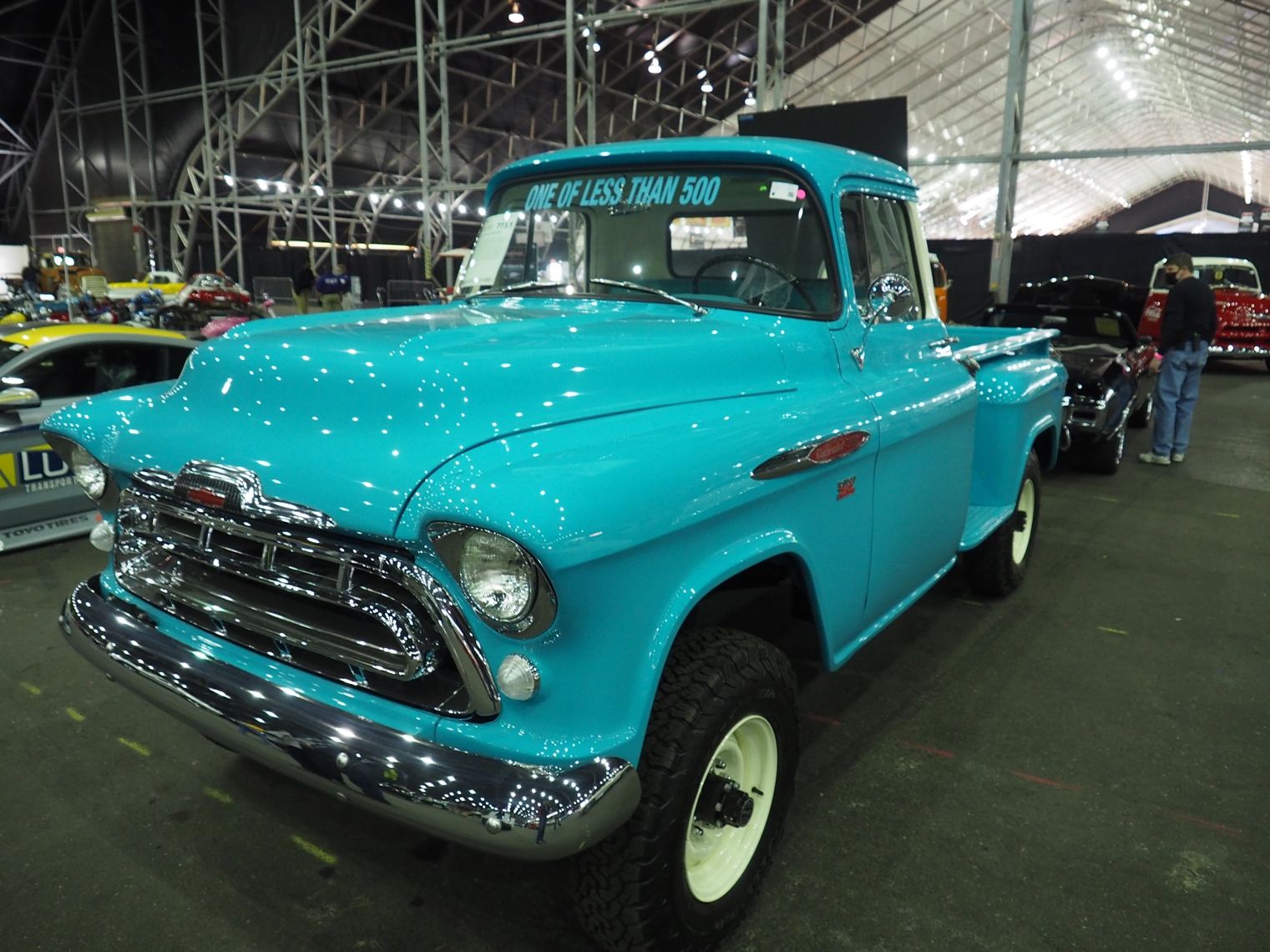 Despite their scarcity, the NAPCO 4X4 trucks still show up at car shows and auctions. The 1957 Chevrolet truck above was sold at the March 2021 Barrett-Jackson Auction.  It featured a recent extensive restoration effort and was powered with a period-correct 235 CI straight-6-cylinder engine and a 4-speed manual transmission. The seller noted that they had rebuilt the all-wheel-drive system along with the other mechanical parts of the Chevy. It sold for $55,000.

NAPCO 4X4 conversion kits paved the way for truck makers to offer an efficient and economical four-wheel drive to the American public. The kits were easy to use and proved that a demand existed for a rugged four-wheel-drive truck that continues on today. This kit also ushered in the early days of the healthy and exploding off-road aftermarket we have today.