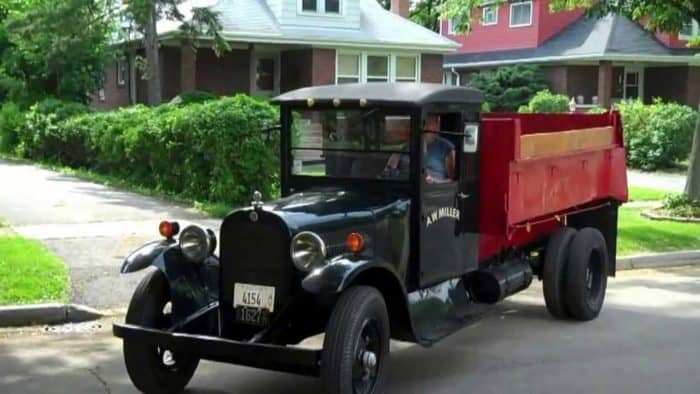 The Dodge dually has been around since 1924. Every Dodge dually from that early in the company’s history was a 1 ½ ton or larger truck, and finding an early model Dodge dually in good shape is incredibly difficult. Modern Dodge trucks are frequently equipped with dual rear wheels (DRW or dually). The current iteration, the Dodge 3500 DRW (and up), is well known for its toughness and high towing capacity; especially when equipped with a diesel engine.

The Dodge dually is one of the more frequently researched trucks on the internet. With so much interest in the Dodge dually, we thought we would write a sort of history of the Dodge truck, taking care to concentrate on the Dodge dually built during each series of trucks. So, here we go, starting with the Dodge Brothers Company that was founded in 1900. 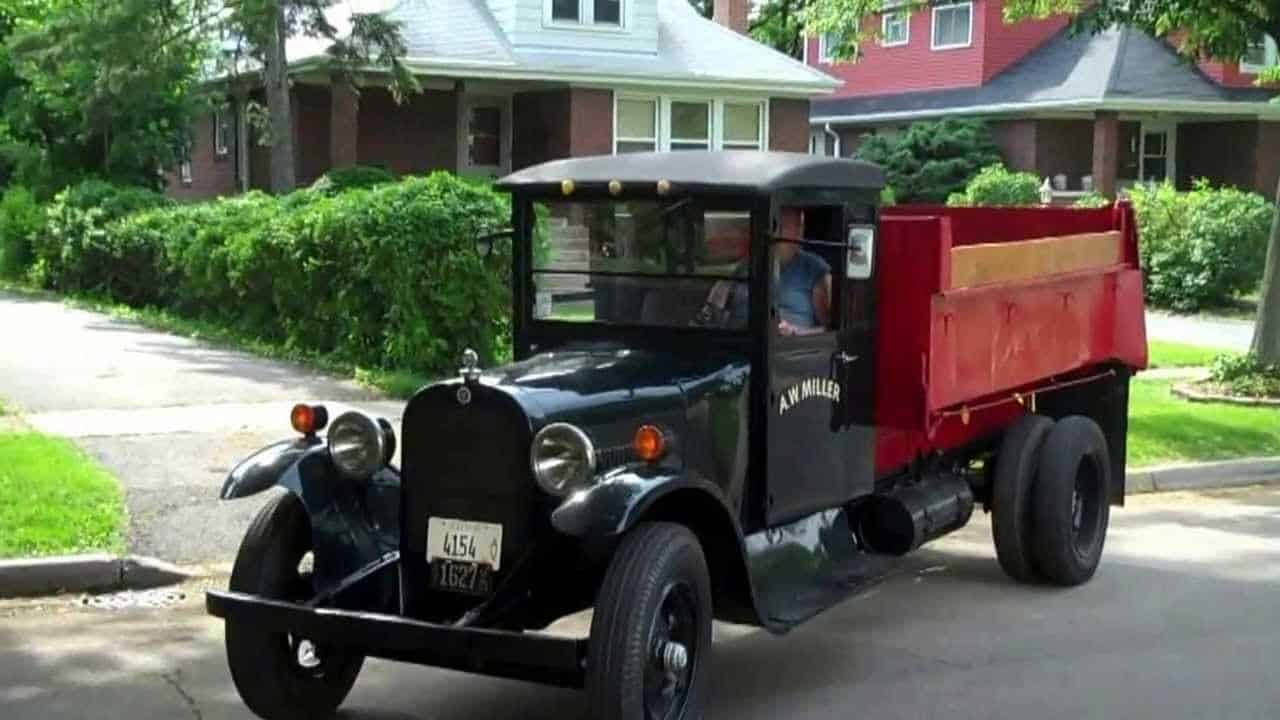 The Dodge brothers, John and Horace, began their automotive careers building the majority of the mechanical parts used in the Ford Model T. Basically a Tier 1 supplier before they were called Tier 1 suppliers. While they did work for several automobile manufacturers, the Dodge Brothers Company did not offer an automobile of its own until the 1915 model year (built in 1914). In the beginning, the company refused to build a truck because they could not produce cars fast enough to meet demand.

As WWI was wrapping up, the U.S. Military asked the Dodge Brothers Company to supply approximately 20,000 half-ton chassis cowls, cargo trucks, light repair trucks, and ambulances to replace equipment lost during the fighting. John and Horace Dodge readily agreed and began building their first trucks. This foray into military-use trucks led the brothers to build the Dodge Brothers Screenside Commercial Car, a half-ton truck for public consumption. Unfortunately, no Dodge dually was built this early in the company’s history. Although these were the only trucks the Dodge Brothers Company built until 1928, they did upgrade to a 3/4-ton payload rating in 1923. It wasn’t until Dodge Brothers entered into a contract with Graham Bothers in 1924 to build 1 ton and 1 ½ ton trucks that a Dodge dually appeared, but they had the Graham Brothers nameplate on them. 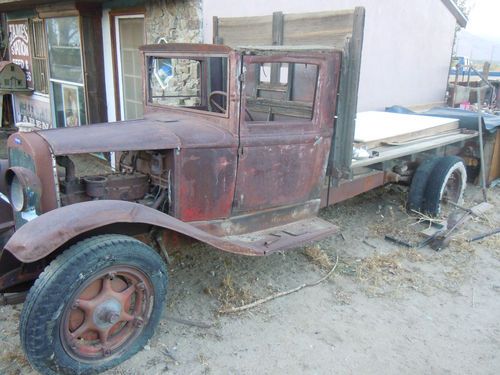 In 1928, Walter Chrysler purchased the Dodge Brothers Company. The purchase was completed just as Dodge was introducing its 1929 model year offerings. That year, the Dodge dually was available in 1 ½ ton, and up to 3 ton, trucks and had the Dodge logo on them. These trucks had to compete with Ford, Chevrolet, and Chrysler’s other truck brand Fargo. The 1929 3 ton Dodge dually was powered by a 241 cu-in. six-cylinder engine that generated a whopping 78 hp. The powerplant was mated to a heavy-duty four-speed manual transmission. This Dodge dually featured four-wheel hydraulic brakes, which was quite an innovation for the era.

In 1933, Chrysler redesigned all of its trucks, including the Dodge dually. The redesign produced some of the sexiest trucks on the market at the time. Shortly after the redesign, Chrysler Corporation began to recover from the effects of the Great Depression. In fact, sales increased by eight-fold after the redesign. In 1936, Dodge trucks adopted the fore-point design. The front axle was moved forward, shifting load position and allowing for greater stability and payload capacity. The smallest Dodge dually of the era could carry 9,500 pounds, outshining its competitors. 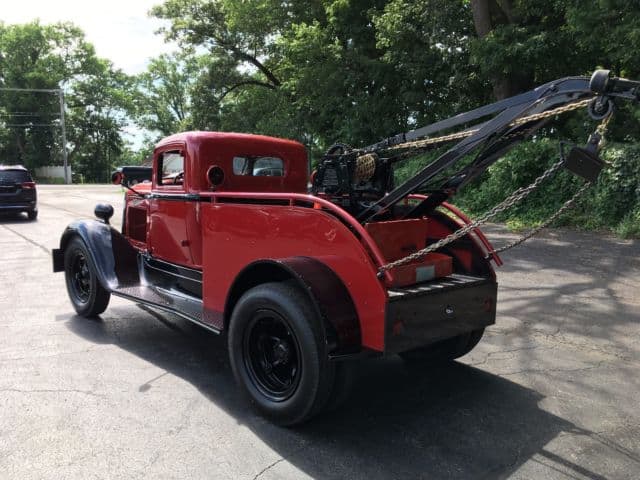 In 1939, Dodge began building job-rated trucks. These trucks had heavier duty components depending on their intended use. During this period, Dodge was the first division within the Big Three to introduce a diesel engine and a four-wheel drive pickup truck. That four-wheel drive truck, the Dodge Power Wagon, has become one of the most iconic four-wheel drive trucks in automotive history.

The Dodge dually of the era was built on a 133-inch wheelbase and had a 9-foot cargo box. These trucks were powered by a 218 cu-in. flathead six-cylinder engine that generated 75 hp. In 1942, the wheelbase and cargo box were shortened to 120 inches and 7 ½ feet. The engine was changed to a 230 cu.in. flathead six capable of 105 hp. 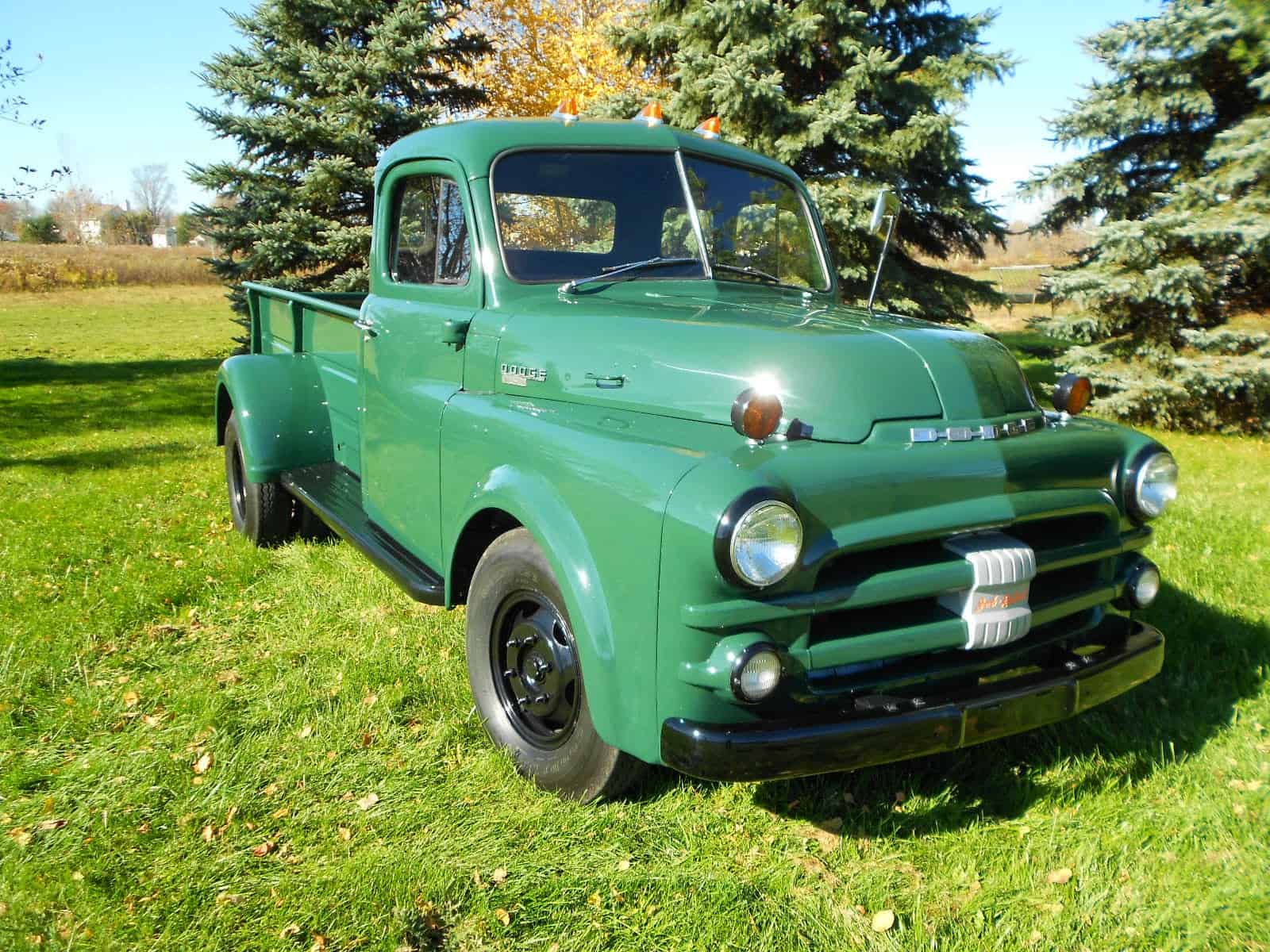 The B-series Dodge dually was introduced for the 1948 model year. Production of the B-series trucks lasted until the introduction of the C-series for the 1954 model year. The B-series introduced the world to Dodge’s new Pilothouse safety cab design. The Pilothouse cab was the first to feature Chrysler’s ”chair height” seat. Additional visibility improvements were achieved with a higher and wider windshield, door glass, and rear window, as well as the addition of optional rear quarter windows. The B-series also featured front axles and wheels that were eight inches further back and the engine was moved slightly forward when compared to previous models. Similar to the fore-point design, this move allowed all Dodge trucks to have a higher payload capacity.

A B-series Dodge dually was powered by the same flathead six used in the previous model. Output stayed at 105 hp. The standard gearbox was a three-speed manual, but a four-speed was optional. The dually could have either a 116-inch wheelbase with a 7 ½ foot cargo box or a 126-inch wheelbase with a 9-foot box. 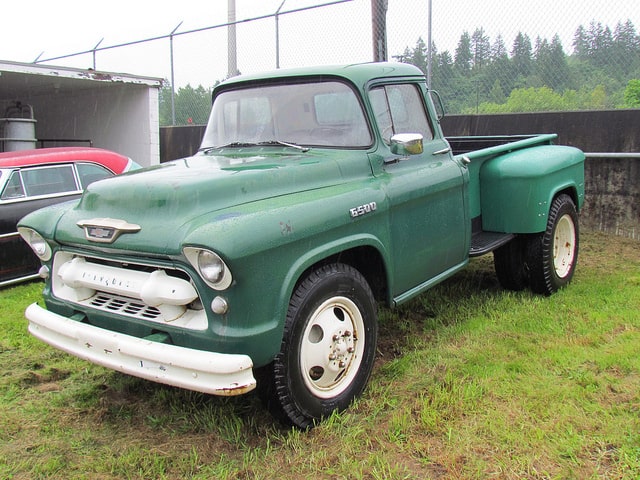 The C-series didn’t last long. The trucks were only built for the 1954 through 1960 model years. The series is significant for introducing the first Dodge trucks with V8 engines. This series was the first to have a Dodge dually powered by a Hemi V8 as well.

Since all Dodge fans are more interested in the Hemi version of every engine, we will skip right to the Hemi options available in a C-series Dodge dually. The smallest Dodge dually of this series was a 1 ½ ton. It could be powered by a 241 cu-in. Hemi V8 capable of 133 hp and 220 lb-ft of torque. This engine carried through the 2 ½ ton trucks. Above 2 ½ tons, all trucks had an optional 331 cu-in. Hemi available. This powerhouse offered 172 hp and 294 lb-ft of torque if a buyer opted for the double-barrel carburetor. The Hemi engines gave Dodge heavy-duty trucks the highest average highway speeds in the industry. 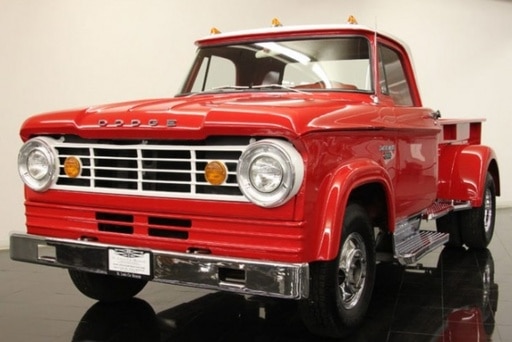 The earliest trucks were offered two engine choices. The standard powerplant was a 225 cu-in. slant six that offered up 140 hp, but the all-new 318 V8 was available. The output from the 318 was 200 hp. After 1960, all Dodge trucks had alternators instead of old-style generators. The standard gearbox was a three-speed HD synchro, but a three-speed Extra HD and a four-speed synchro with a floor shifter were also available. 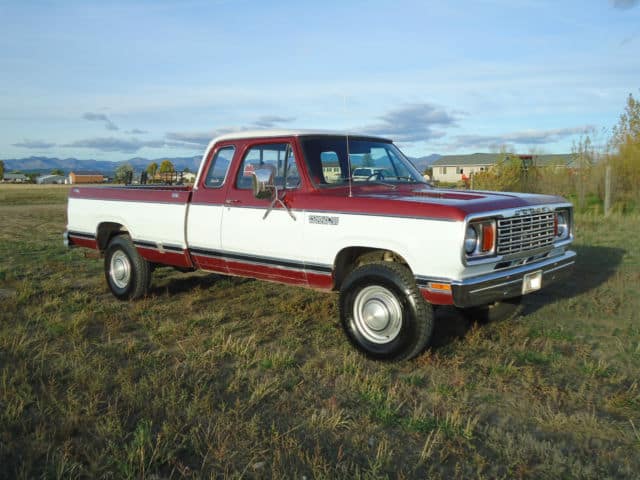 In 1981, Dodge introduced the final phase of the D-series. The trucks had been rebadged as Dodge Ram and the Ram hood ornament began to adorn the light-duty trucks again. The D-series Dodge dually was generally powered by one of three engines. The gas options were a 318 and a 360 V8. The single diesel option was an inline six B-series Cummins capable of 160 hp and 400 lb-ft of torque; a great monster for towing. 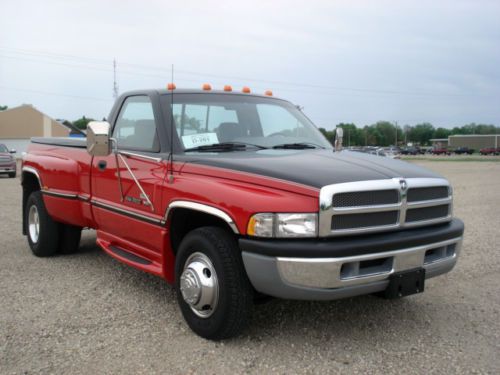 For the 1994 model year, Dodge introduced a radical redesign of its trucks. The design was so polarizing that potential buyers either loved the truck or hated it.

In 1994, Dodge built all of their 1 ton and larger trucks as duallies for the first time. Gasoline engine options included the 318 and 360 V8s as well as a 488 V10 with a cast iron block that was capable of 310 hp and 450 lb-ft of torque. The diesel option was the same B-series Cummins found in the previous generation trucks. The Dodge dually essentially remained the same through 2002 with the exception of minor increases in engine output.

For the 2002 model year, Dodge introduced a redesign. The company called it a redesign, but it leaned heavily on the previous look. The design remained intact through the 2009 model year. The major innovations for the Dodge 3500, the first level where buyers can find a Dodge dually, was the 3500 Chassis Cab. This truck featured an optional Cummins 6.7L that produced 350 hp and 650 lb-ft of torque. In 2008, Dodge added larger models. The Dodge dually 4500 and 5500 models had gross weight capabilities of 16,500 lbs and 19,500 lbs, respectively. Both came standard with the 6.7L Cummins. 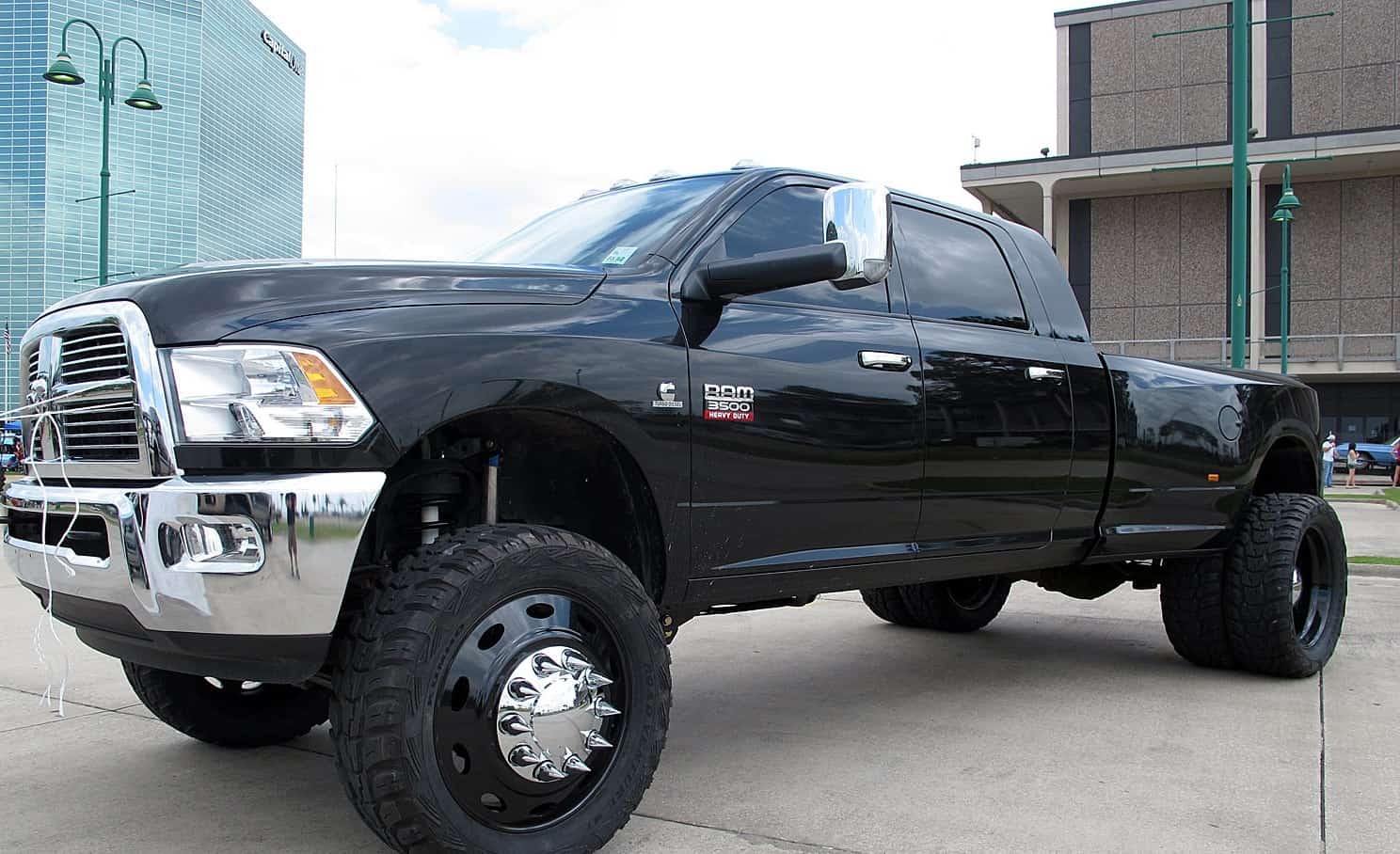 Well, there you have it. Hopefully, our review of the Dodge dually has had a few facts that you did not know. If I have forgotten anything or skipped over a fun fact that you think should be included, hit us up in the comments section.