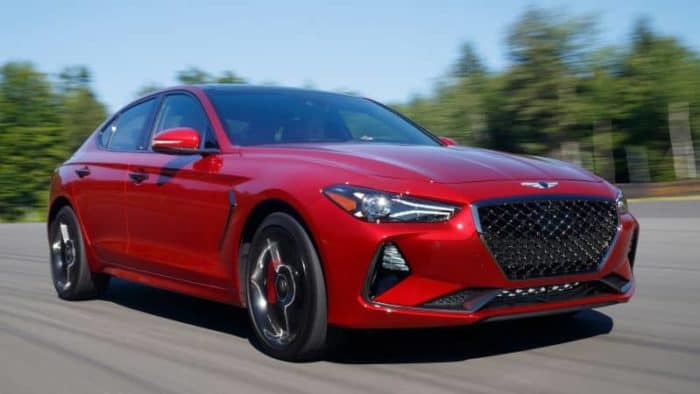 Genesis Motors is slowly but steadily beginning to reap the rewards of a plan it has put into motion after spinning off from its parent brand, Hyundai. A former luxury model at the high end of the Hyundai lineup is now a brand of its own whose portfolio is growing by the day. By 2020, the luxury South Korean car maker is expected to field no fewer than six distinctive models including two all-new crossover SUVs. They’re also expected to completely overhaul their initial large sedan offerings and introduce another sporty coupe based on their platform. Before we take a look at what the 2020 Genesis lineup will have to offer, let us first focus on the company’s sales figures and their projections in the U.S.

The Korean automaker’s first full model year in the U.S. saw them marketing 20,612 of their full-size sedans. Most of that figure goes on the smaller G80 with the proportion going 4:1 in its favor against the G90. Although they’ve since introduced the new G70 compact (late 2018 arrival), company’s 2018 figures have unexpectedly deteriorated compared to 2017. Exactly 10,312 models sold in the U.S. during 2018 means the Korean company has recorded 50 percent less deliveries than they had accomplished in 2018.

This surprising loss of market share is expected to be mitigated by the introduction of the above mentioned new models in 2019 and 2020. The compact G70 sedan began weaving its magic after a slight delay and it’ll easily become the brand’s best-selling model in 2019. The remainder of forthcoming models, on the other hand, will be doing their bit in 2020 and 2021.

But why is Genesis having such a tough time getting a break in the U.S.? Especially considering the fact they offer more bang for the buck compared to any other luxury automaker out there, and provide more than a generous warranty?

There are actually two reasons, and they’re intertwined. First, the Genesis lineup is, as established already, rather shallow at the moment. What’s more, the South Koreans have opened up a select few Genesis dealerships instead of selling the luxury cars directly through their vast Hyundai network. While this might be a necessary strategy for a luxury brand to differentiate itself and ultimately succeed, the Koreans have obviously implemented it prematurely. Waiting for the brand to field a wider selection of available models before moving it out of Hyundai dealerships would have probably been a better option. Until they sort things out, let’s take a look at what to pay attention to when it comes to the Genesis brand in 2020.

A more affordable and diverse selection of vehicles can be browsed in the parent company’s 2020 range.

The full-size G90, previously known as the Hyundai Genesis, is the young division’s very first car that went through an extensive overhaul for MY 2020. The next-gen model was initially unveiled in Hyundai’s domestic South Korean market during 2018, but didn’t arrive stateside prior to the 2019 LA auto show.

The all-new second-generation G90 flagship sedan sports a dramatically changed design which states the company’s intention to turn the recent struggles around in one fell swoop. Not only is the new G90 even more beautiful than its predecessor, but it also sports a completely overhauled infotainment system with a new 12.3-inch touchscreen display. Most of the interior remains intact, however, as the outgoing model’s high-quality materials carry over.

Although prices still haven’t been disclosed, the G90 should be available for around $70,000 in its most basic form. This will include standard lane-following assist, rear cross-traffic and forward-collision alert systems. Also standard across the board are Apple CarPlay and Android Auto integration systems but that was to be expected from a luxury flagship sedan.

The next-gen Genesis G90 uses two powertrains carried over from the outgoing model. A 3.3L twin-turbo V6 serves as a base engine and returns 365 horsepower, while an optional 5.0L V8 cranks up 420 ponies. Both engines are paired with an 8-speed automatic transmission and available with an optional $2,500 all-wheel drive, although rear-wheel drive is standard. 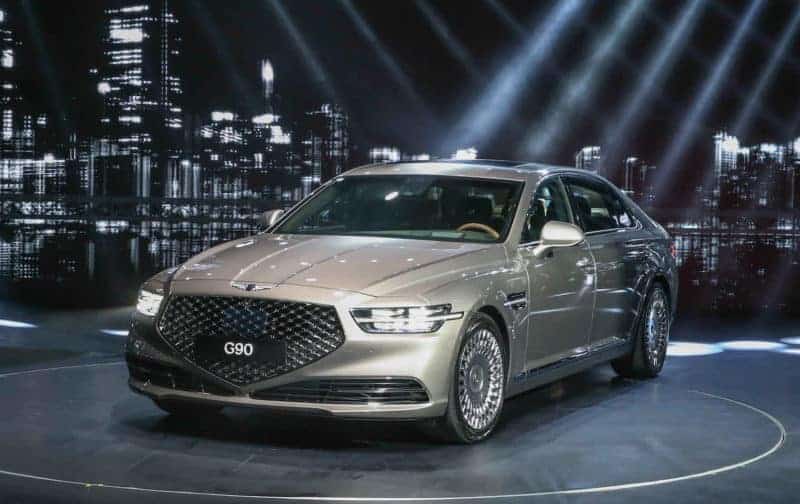 The GV80 is the first of two upcoming Genesis SUVs poised on addressing the current lineup’s deficiencies. A concept car bearing the same name has already been presented at the 2017 New York auto show, but the actual production model is, naturally, expected to differ in at least a few ways. Most significantly, it won’t be a fuel cell vehicle like the concept, but a conventional model with an internal combustion engine.

The Genesis GV80 will either be based on company’s sedan underpinnings, or an all-new platform designed with crossovers in mind. On the other hand, the extended Hyundai Santa Fe or new Hyundai Palisade platform could do the trick as well.

Very little is known at this point, but since the GV80 is expected to be larger than Santa Fe and larger of the two Genesis crossovers, it’ll almost certainly feature some sort of a three-row seating arrangement. It should also command a hefty price, but expect it to still be way more affordable than its premium competitors from Germany and Japan alike.

Unlike the fuel cell concept, the production Genesis GV80 will sport a lineup of conventional engines with a possible hybrid in the mix as well. The way things stand right now, a 3.3L twin-turbo V6 looks like the best bet as the initial GV80 powertrain. It’s good enough for 365 horsepower and 376 lb-ft of rotational force and should fit like a charm in that mid-size luxury SUV game.

An additional battery pack and electric motor(s) would raise the output further up, but it’s improbable they’d be offered with a turbocharged engine. Instead, the Koreans might develop a comparable naturally aspirated mill, or use one from the Hyundai lineup. There are talks of the all-new 3.5L V6 being developed by Hyundai, after all.

We’ll probably know more in late 2019 when more details about the production-ready GV80 are expected to emerge. The production version is scheduled to arrive during the first quarter of 2020.

The moment it arrived to the market in 2018, the compact luxury sedan picked itself Motor Trend’s Car of the Year Award. A current linchpin of the Genesis lineup (until the mentioned crossover duo arrives), the G70 has managed to fuse the impeccable styling, superlative performance, and world-class comfort and refinement in its first attempt – something a lot of its competitors required years to perfect.

Like any other Genesis model, the G70 offers great value for money which is especially important in the highly competitive segment it competes in. Pitted against the likes of BMW 3 Series, Audi A4, Mercedes-Benz C Class, Alfa Romeo Giulia, and many others, the G70 wouldn’t be able to succeed differently.

Its low entry-level price (for its class) is probably one of the compact luxury sedan’s strongest points. The G70 starts from under $35,000 which might be on par with a number of its competitors, but the Korean luxury compact won’t devour as many green bills for optional equipment as less cost-effective German examples, for instance. Instead, you’ll get a heavily loaded model for way under $50,000.

The Genesis G70 initially starts with two turbocharged powertrain offerings. The base 2.0L turbo four is good enough for 253 horsepower and 260 pound-feet of twist while the optional 3.3L twin-turbo V6, as already established, makes 365 ponies and 376 lb-ft. The former might feel inadequate on the highway since the G70 is one of the heaviest vehicles in its class, but the latter comes with virtually no shortcomings.

Both engines can be had in both rear and all-wheel drive configurations and with standard 8-speed automatic gearboxes. However, the Sport trim does offer an optional 6-speed stick if ordered with the smaller of two engines.

Some of the Genesis G70’s precious few shortcomings include a cramped rear seat and infotainment system taken from the non-luxury Hyundai models. Considering how Genesis buyers aren’t supposed to be badge-snobs, the latter issue shouldn’t pose a problem for them either. 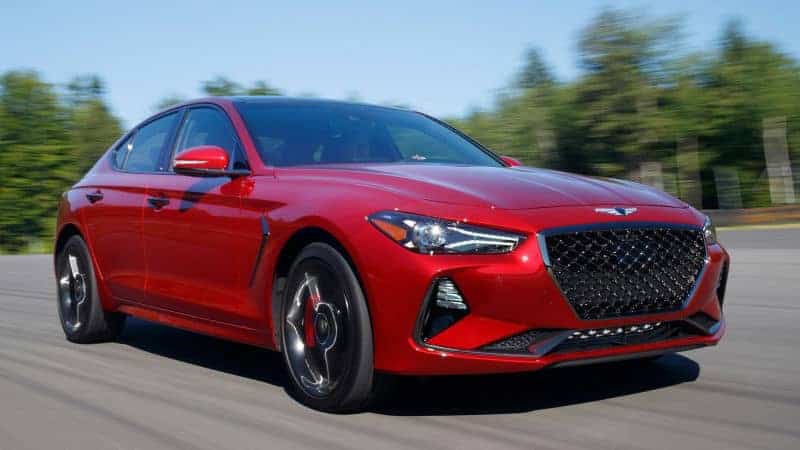 The smaller of the two full-size Genesis sedans is set to follow in its larger sibling’s footsteps. In other words, the 2020 Genesis G80 will also sport a completely new design and a correspondingly overhauled chassis. Most of the next-gen G80’s cues will be in tune with those of the redesigned G90 and the Essentia Coupe Concept as well, considering how the test mules seem to be hiding a pentagon-styled grille underneath the vinyl wrap.

The redesigned G80 should share the remainder of the G90’s upgrades including a slightly changed interior, introduction of a new infotainment system and tech features, and some new trims and materials as well. The full-size luxury sedan should again start from under $45,000 but it’s still unclear what the Koreans have in their plans for the performance-oriented G80 Sport.

The forthcoming G80 should retain the current model’s six cylinder powertrain lineup, but start saying good byes to the sturdy 420-horsepower 5.0L V8 which is slowly but steadily being phased out from the Genesis brand.

The entry-level models will, thus, retain their 3.8L V6 mills capable of putting up as much as 311 ponies and 293 pound-feet of torque. The only other option during 2020 should be a 3.3L twin-turbo V6 with 365 ponies. A hybrid version could also be in the cards sooner rather than later and might the one to supplant the high-displacement V8. An 8-speed automatic and both drivetrain configurations will continue to be offered across the range. There are also talks about an all-new 2.5L turbo four but that won’t happen in time for MY 2020.

The redesigned G80 will be officially unveiled sometime in 2020. Like its larger sibling, the new car will also make its initial appearance in Asia, before migrating westwards. 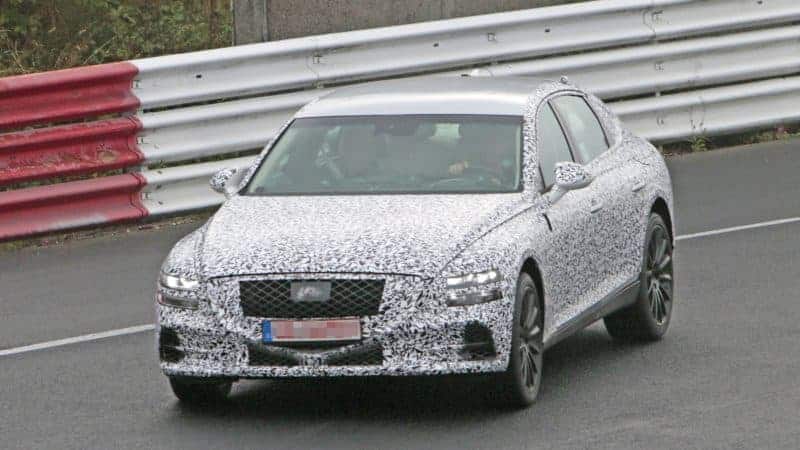 What’s Not in the New 2020 Genesis Lineup

With the complete 2020 Genesis lineup being entirely new or completely overhauled, we simply can’t play any of the upcoming Genesis vehicles down here. Especially considering they offer arguably the best value for money package among all the luxury brands in the U.S. There you have it. If you’re in the market for a luxury car, you should seriously consider this upstart Korean brand. Lest you end trapped in a vicious cycle of maintenance costs the remainder of the luxury brands are known for. This rings especially true for their German competitors, so if you feel like getting out of the mentioned cycle, why not spring for something more oriental this time around?