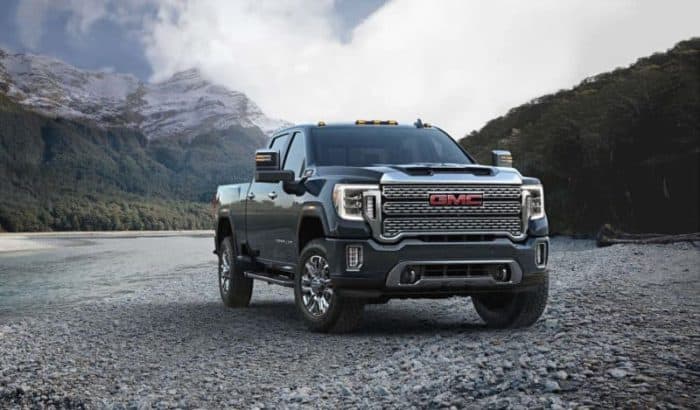 GM’s trucks, SUVs, and commercial vehicles division is riding a wave of strong sales which are only expected to increase further in the coming years. After locking the best sales record in the U.S. since 2004, in 2017, their fully redesigned half-ton and heavy-duty trucks are expected to help them achieve the above stated goal going forward. The half-ton Sierra 1500 already debuted for MY 2019, and HD Sierras have recently done the same as early 2020-year models. What’s more, GMC has also put in motion a plan for mostly redesigned crossover/SUV lineup by the time 2020 is upon us. Before we move on to the 2020 GMC lineup and our expectations for it, let’s take a closer look at the division’s above mentioned sales figures.

Aside from healthy U.S. figures, GMC also boasts significant Canadian sales. In 2017, they amounted to 99,508 units which is also a recent record. Like it is the case in the U.S., however, the Canadian sales have also dropped for 2018. Despite some unexpected slight setbacks in 2018, however, GMC is still on the right path. Without further ado, here’s what you should consider buying and what might better be skipped if you’re in the market for a GMC vehicle in 2020.

Although the next-gen Chevrolet Silverado HD had the honor of being the first of two heavy duty trucks revealed, it didn’t take long for General Motors to present the all-new GMC Sierra HD lineup. The 2020 GMC Sierra heavy-duty trucks are available as of late 2019 with manufacturer’s suggested retail price starting from $37,195 for the regular cab long-bed configuration in the base trim. On the other end of the scale, the crew cab exclusive Denali trim with a long bed costs a whopping $65,495. Of course, the one-ton Sierra 3500 will require at least $1,000 more than that for each of corresponding trim levels.

The workhorse trucks are designed similarly to their Chevrolet Silverado brethren and boast a menacing demeanor that the outgoing models lacked despite their obvious robustness. Still, the GMC versions of the three-quarter ton and one-ton HD trucks are arguably less polarizing than the Silverado’s.

Although mechanically identical, the GMC trucks do tend to offer something their Chevrolet siblings don’t have. This time, it’s the MultiPro six-way tailgate exclusive for the GMC stablemate. Furthermore, the all-new Sierra HD trucks are built on a new T1 platform and they’ve shed a lot of weight despite growing in size overall. This was achieved by a more widespread use of aluminum.

The GMC Sierra HD powertrain lineup reciprocates that of the Chevy Silverado HD trucks. In other words, the Sierra HD 2500 and 3500 are offered with a duo of engines – one petrol and one oil burning. With the old 6.0L V8 finally retired, the new 6.6L V8 has now taken its place. The new gasoline engine provides as much as 401 ponies and 464 lb-ft of torque while being paired with a somewhat outdated 6-speed automatic transmission.

The sturdy 6.6L Duramax turbo-diesel V8 has carried over from the previous generation, and so have its 445 horsepower and 910 pound-feet of rotational force. This optional powerplant, however, is now paired with a new Allison 10-speed automatic transmission.

The new Sierra heavy-duty lineup of pickup trucks now boast upgraded payload and towing capacities which was a much-needed improvement as their opponents have been beating them by a considerable margin for a while now. Maximum towing capacity was thus increased to 35,500 pounds with the bed-mounted fifth-wheel option ordered and, of course, the optional diesel engine. 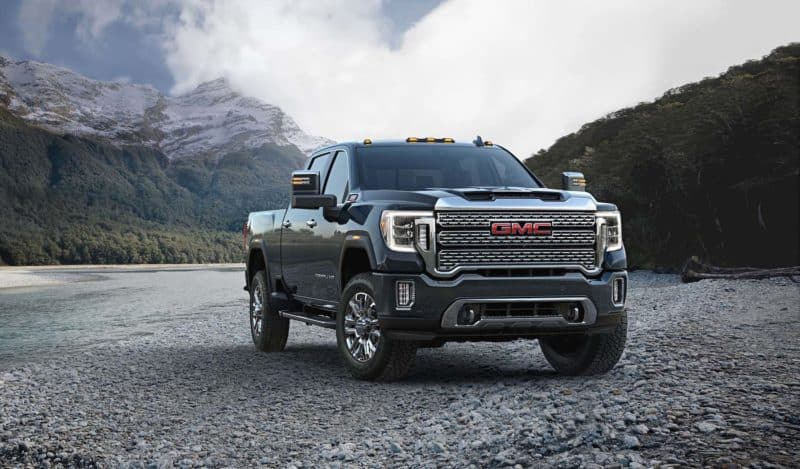 Much like their mechanical twins from Chevrolet (Tahoe and Suburban), the GMC Yukon and Yukon XL, too, are in for a substantial overhaul during 2020. This comes as no surprise since the full-size Silverado and Sierra 1500s, upon which they’re based, have already undergone the same process.

Although both full-size body-on-frame SUVs are expected to retain their boxy shape, which generally doesn’t allow for too many aesthetic changes, they’re still in for a substantial upgrade or two underneath. It’s already become apparent that the next-generation of GM’s body-on-frame SUVs, including both Yukon iterations, will sport an independent rear suspension for improved ride quality and rear passenger legroom.

The GM designers have also done everything within their power to improve the full-size SUV’s aerodynamics by utilizing front air curtains. When they finally do arrive sometime in 2020, possibly even as early 2021-year models, expect their prices to be slightly adjusted to offset the inflation and new technology.

The powertrain lineup of the next-gen GMC Yukon and extended-wheelbase Yukon XL is likely going to be carried over. This means that some of the heaviest offerings on the market are set to continue offering thirsty, but capable 5.3L and 6.2L V8 engines as motivation. At the moment, the powerful duo of engines is capable of putting up 355 horsepower and 420 horsepower respectively, but don’t be surprised if these figures find a way to grow by a slight margin by the time 2020 is upon us.

The 2020 GMC Yukon and Yukon XL will also adopt a new 10-speed transmission, although probably as an option. An 8-speed auto will likely be standard, on the other hand. 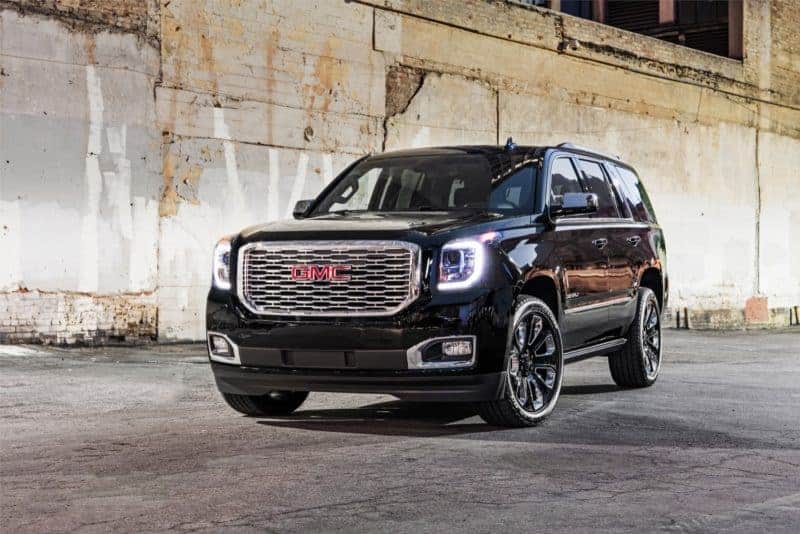 The second-generation GMC Acadia made its debut in late 2016 which left GM with no other option but to resort to a mid-term facelift for MY 2020. The facelifted Acadia was officially revealed earlier during 2019 and has reached dealerships later in the Fall of the same year.

The redesigned 2020 GMC Acadia now sports a more angular, squared-off look thanks to a completely revised frontal fascia. Its rear end has been reworked too, but not to the same extent as the front. All in all, it’s a textbook facelift as far as the exterior goes.

Inside, the new Acadia sports a redesigned center console with a new infotainment system at its heart. Completely new for 2020 is the AT4 trim which replaces the outgoing All Terrain models. At the moment, the Acadia ranges from around $30,000 to as much as $50,000 and these prices aren’t going to be changed anytime soon.

The 2020 Acadia’s powertrain lineup remains practically unchanged as far as old engines are concerned, but the mid-size crossover does get an entirely new option to choose from. A choice of 2.5L 4-cylinder and 3.6L V6 yields either 193 ponies or 310 horsepower with the latter doing its best to conserve fuel as much as possible.

The all-new 2.0L turbo four exclusive with the range-topping SLT and Denali models slots in between with 230 horsepower and 258 lb-ft of torque.

Needless to say, an all-wheel-drive setup is available across the board, while most models still drive on front wheels. A somewhat outdated 6-speed auto has finally been replaced with a new 9-speed gearbox developed jointly with Ford. All three engines can now be paired exclusively with one. 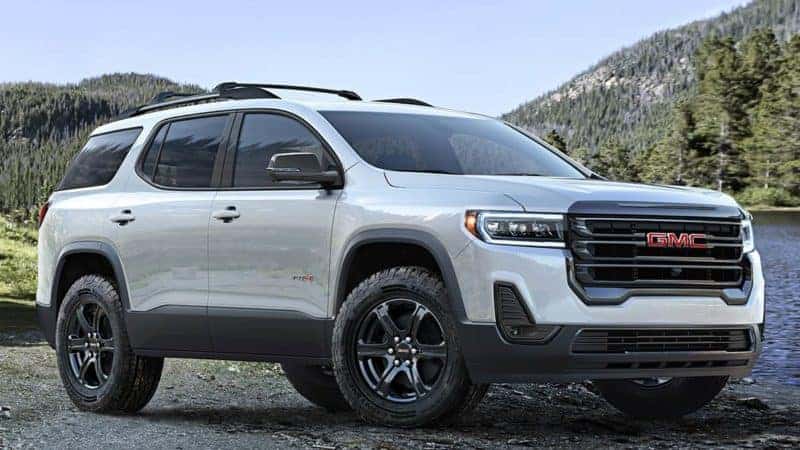 The GMC Canyon might have helped revive the mid-size pickup market in the U.S. alongside its stablemate Chevy Colorado, but that was way back in now-distant 2014. GM’s smaller trucks are now beginning to show their age and the arrival of Ford Ranger and Jeep Wrangler-based Gladiator truck will doesn’t work in their favor.

Since GM doesn’t have any plans of updating their mid-size offering, the Canyon and Silverado alike find themselves on the wrong end of the hot/cold pickup trucks list come 2020. The GMC Canyon only offers an optional power-locking tailgate and a revised 8-inch touchscreen display. Otherwise, it’ll basically remain unchanged since at least MY 2021 or 2022.

While capable, affordable, and extremely versatile considering it comes in no fewer than 11 trims and configs, the Canyon still wouldn’t be our first choice when it comes to mid-size pickups in MY 2020. However, many people will still find its starting $21,500 sticker too good to turn down.

Like its Colorado sibling, the GMC Canyon can be ordered with three different powertrain choices. The entry-level models are mostly paired with a 2.5L 4-cylinder engine that provides 200 horsepower and 191 pound-feet of torque. Higher-grade units come standard with a powerful 3.6L V6 instead. Still available with base models as an option, the only V6 in the Canyon lineup generates 308 ponies and 275 lb-ft of torque.

Finally, those in need of more rotational force and better fuel economy as a byproduct will likely opt for a 2.8L Duramax turbo-diesel 4-cylinder which is rated at 181 horsepower and 369 pound-feet of twist.

Transmission choices at the moment include an 8-speed auto, and either a 6-speed manual or a corresponding automatic. By the time the next-gen arrives, the venerable 6-speed automatic will likely have retired in favor of a new 9-speed automatic trans. However, that isn’t going to happen in 2020. 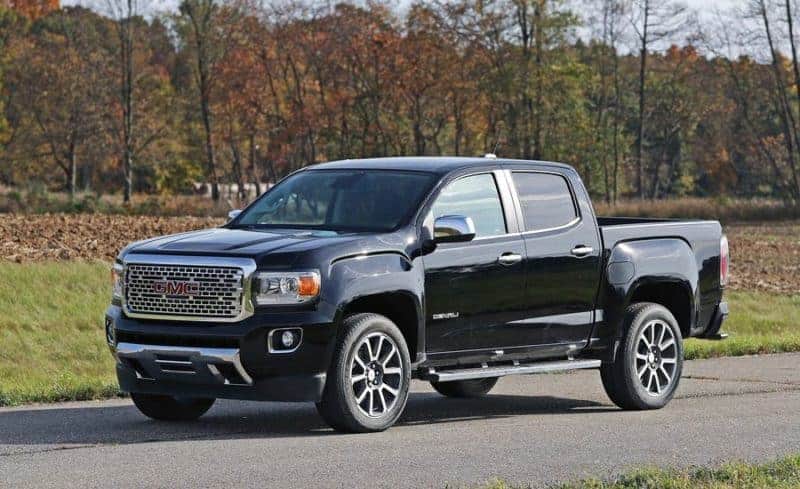 The compact crossover SUV was completely overhauled back in 2017 which probably means the 202o Terrain will be the ultimate pre-facelift model of the second generation. Although it boasts a nicely refined interior, good ride quality, and spacious cabin, the Terrain also has a few shortcomings. A high starting price of more than $25,000 is one thing, but the range-topping Denali trim’s asking price of close to $40,000 before extras is hardly justifiable.

Overall, the GMC Terrain might be a quality domestic product, but a number of foreign competitors can be described in a similar manner with the only difference being that they’re generally more affordable. Something as simple as this could very well be the final nail in Terrain’s coffin.

What most of its competitors don’t offer, however, are three distinctive powertrain choices. Most Terrains will be ordered with the base 1.5L turbo four that’s good enough for 170 hp and 203 lb-ft of torque. It’s not the most thrilling of engines but it does its job around town. Those in need of more power will get exactly that for around $1,300 more. This optional payment secures a 2.0L turbocharged 4-cylinder engine that cranks out 252 ponies and 260 lb-ft of twist.

Finally, the oil-burning aficionados will be happy to know they can get their hands on a diesel-powered compact crossover which is a rare sight in the U.S. A 1.6L turbo-diesel might be making only 137 horsepower, but it compensates with 240 pound-feet of rotational force and great fuel economy for its class. It also costs the most, however, commanding as much as $3,700 more than the base petrol engine in the cheapest available SLE trim. The fact it’s paired with a 6-speed automatic gearbox can be considered a downside – especially since both gasoline options come with contemporary 9-speed automatics. Finally, it can’t be ordered in an all-wheel drive configuration and beyond the SLT trim which makes it rather limited. 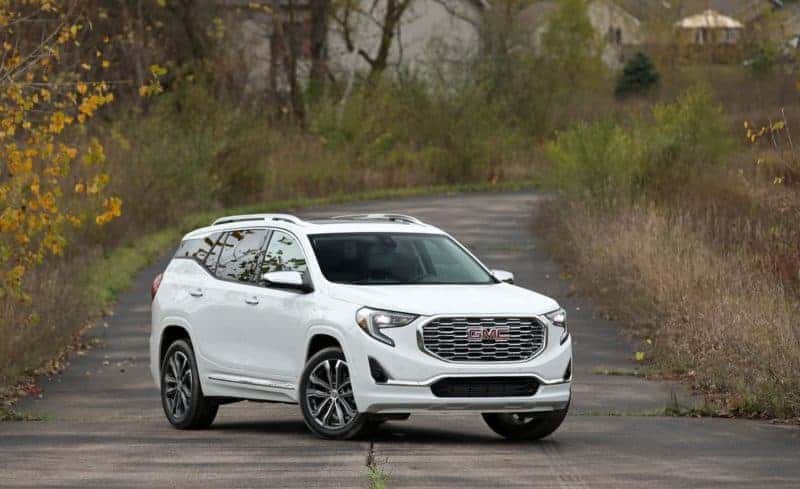