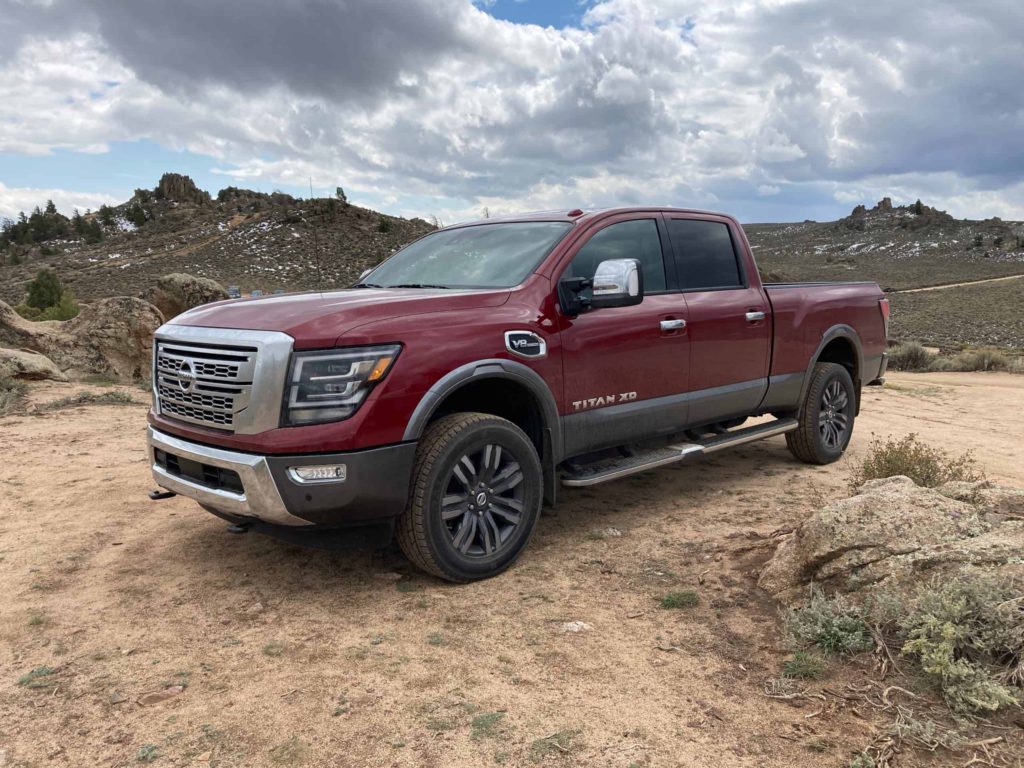 The 2020 Nissan Titan XD is the largest consumer focused full-size truck from Nissan. We took it on a few diverse adventures in the mountains to see what it’s all about.

For 2020, Nissan shaved down a few of the Titan XD configurations that were available in the 2019 version. Both the four-door King Cab and two-door Regular Cab models were dropped from the XD line, leaving only the four-door Crew Cab with a 6.5-foot bed. Nissan also dropped the Cummins turbodiesel V8 engine option for 2020, something we’re going to miss. The only true mechanical upgrades to the 2020 model are a lowered rear axle gear ratio and the new nine-speed automatic transmission replacing the seven-speed used in previous models. The 2021 Nissan Titan XD will be near-identical to the 2020 model. 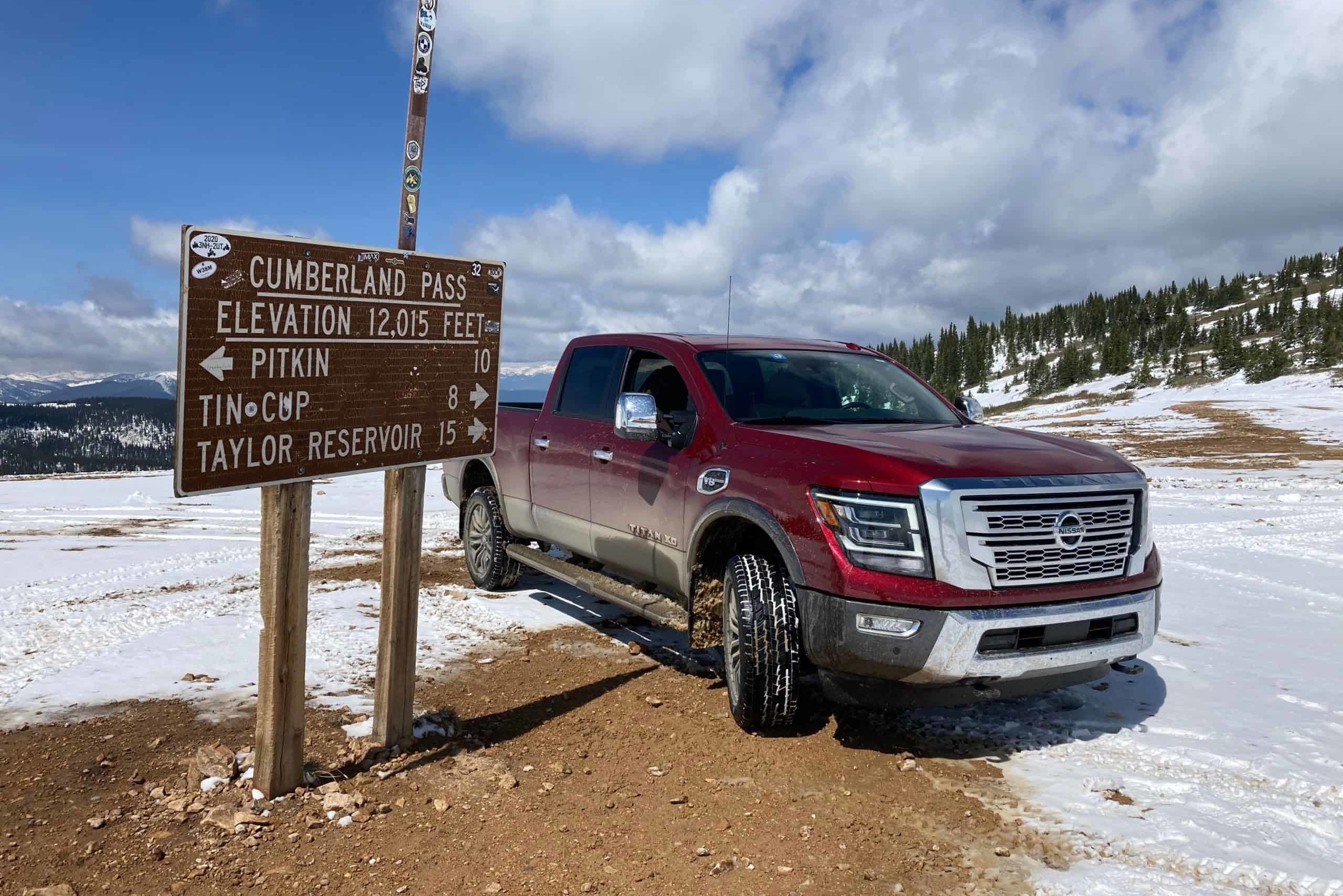 The Nissan Titan is a full-size American pickup, first released in 2004. Assembled in Mississippi, it is now in its second generation, which started with the 2016 model year. That’s also when Nissan launched the XD version. The main difference from the regular second-generation Titan is that the XD heavy-duty frame is derived from Nissan’s commercial vehicle line, making it the better choice of the two if you plan on towing or hauling heavy loads on a regular basis. Both the regular and XD versions of the Titan come in five trims: S, SV, Pro-4X, SL, and, the one we tested, the Platinum Reserve.

A Platinum Reserve Titan XD starts at $63,285. Our test truck had a few premium options. Items like the massive glass roof, Titan Boxes for locked storage in the bed, and a retractable rear bumper step. As driven, our test truck would set you back $69,380.

We tested the 2020 Nissan Titan XD over two weeks. We first took it on a 400-mile roundtrip from Boulder to Crested Butte. That trip ended up being through a crazy early September Colorado snowstorm. We rounded out the testing with an additional 250-miles for a family camping trip.

Testing included a moderate 4×4 adventure over fairly rocky terrain and lots of pavement through a variety of weather. We didn’t get a chance to tow with the truck, but instead focused on more day-to-day and family adventure use. We did haul a lot of gear and people, however!

The Nissan Titan XD handled fine on the open road. It was big and cumbersome in town or maneuvering in the campground — average across the board for a full-size truck. Steering was unremarkable, albeit on the sloppier end of the spectrum. This didn’t cause me any particular concern on my many paved miles. It was also fine on my 40-miles of dirt, snow, and rock doubletrack. At one point, I found myself on a particularly gnarly section. Driving at a crawling pace, I could easily steer the tires around larger rocks or holes as needed. 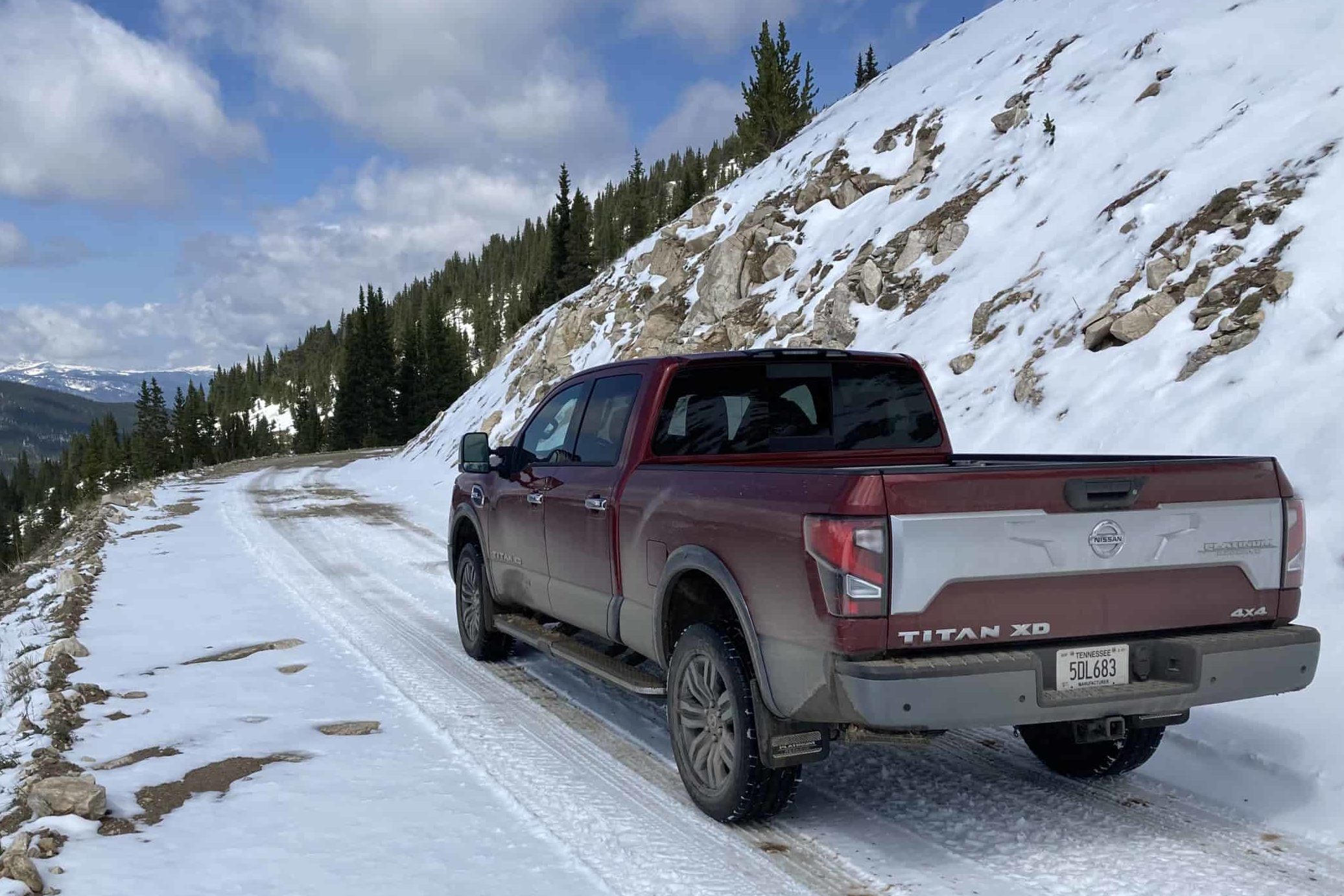 An early-season snowstorm provided an unexpected opportunity to test the Nissan Titan XD handling in slippery conditions. The first was about a dozen miles to get over Colorado’s 11,000-foot Monarch Pass on compact snow covering a paved road. The XD did fine while I maintained momentum and gently modulated speed. But when I slowed down to a crawl for some hardy DOT workers and tried to accelerate again the back end started to fishtail. Not surprising considering I was in 2WD and there was no weight in the bed of the truck. The rescue came from switching to 4WD High on the fly. The fishtailing stopped immediately and confidence in these adverse conditions was restored.

While playing around off-road, there was one snowy and rocky section getting out of a creek crossing where I had to back down and get more momentum to make it through. But like the situation on Monarch Pass, some weight in the back, and better tires would certainly have helped. 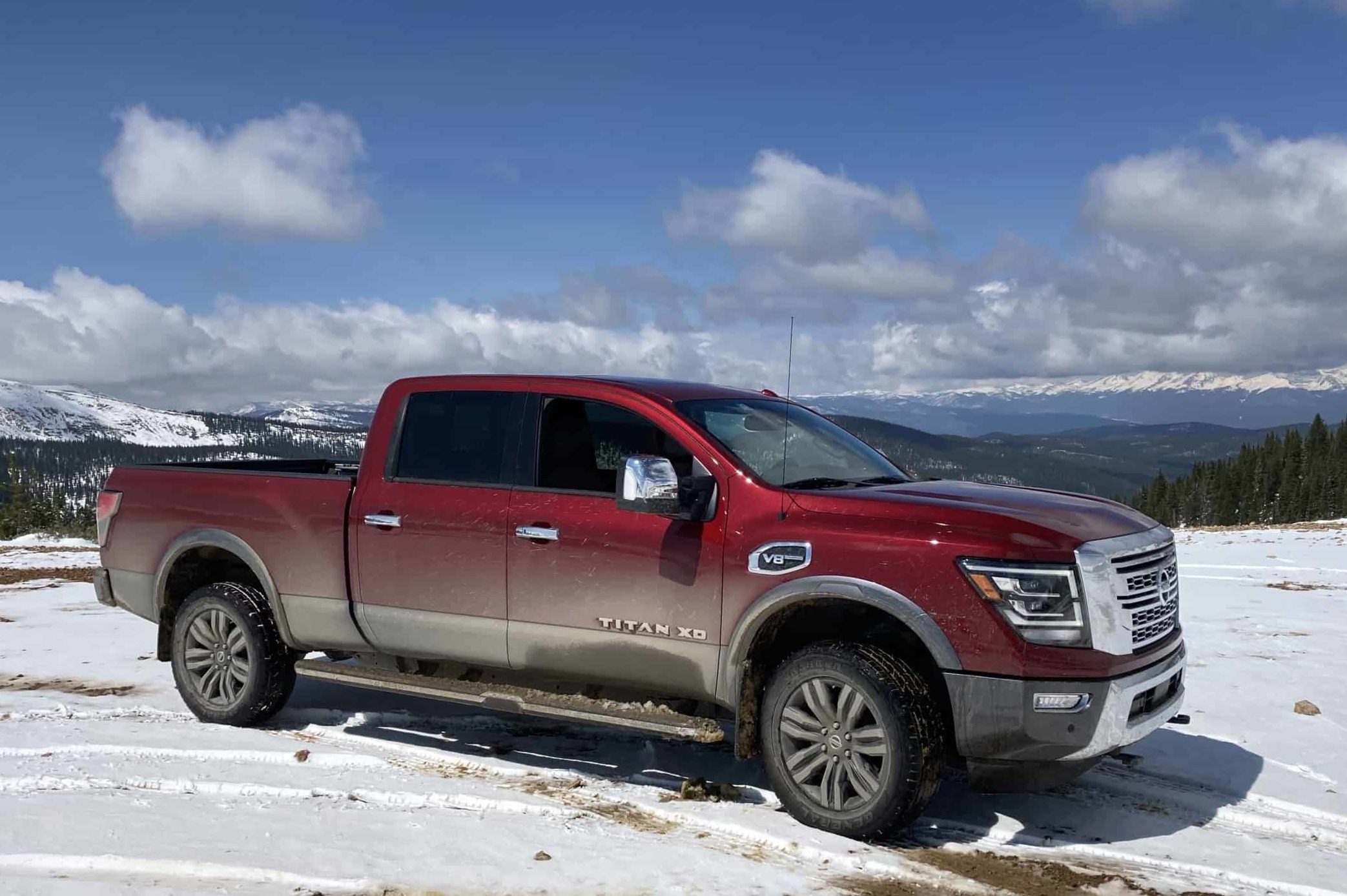 The Nissan Titan XD sits on the lower end of the towing spectrum for a 1/2 ton pickup with a 10,880 pound capacity on the hitch besting the Toyota Tundra at 10,200 pounds, but below the rest—Silverado 1500: 13,400 pounds, F-150: 13,200 pounds, Sierra 1500: 12,100 pounds, Ram 1500: 12,750 pounds. It can also haul 11,040 pounds on the in-bed 5th wheel hitch, something you won’t find from the factory on any of the competitor 1/2 ton options. And to be fair, that’s plenty of towing capacity for a lot of recreationists, including many travel trailers up to about 40-feet long. It does however have two helpful features new to the 2020 version to help with towing: the new 9-speed automatic transmission upgraded from a 7-speed and a lowered rear-axle gear ratio. 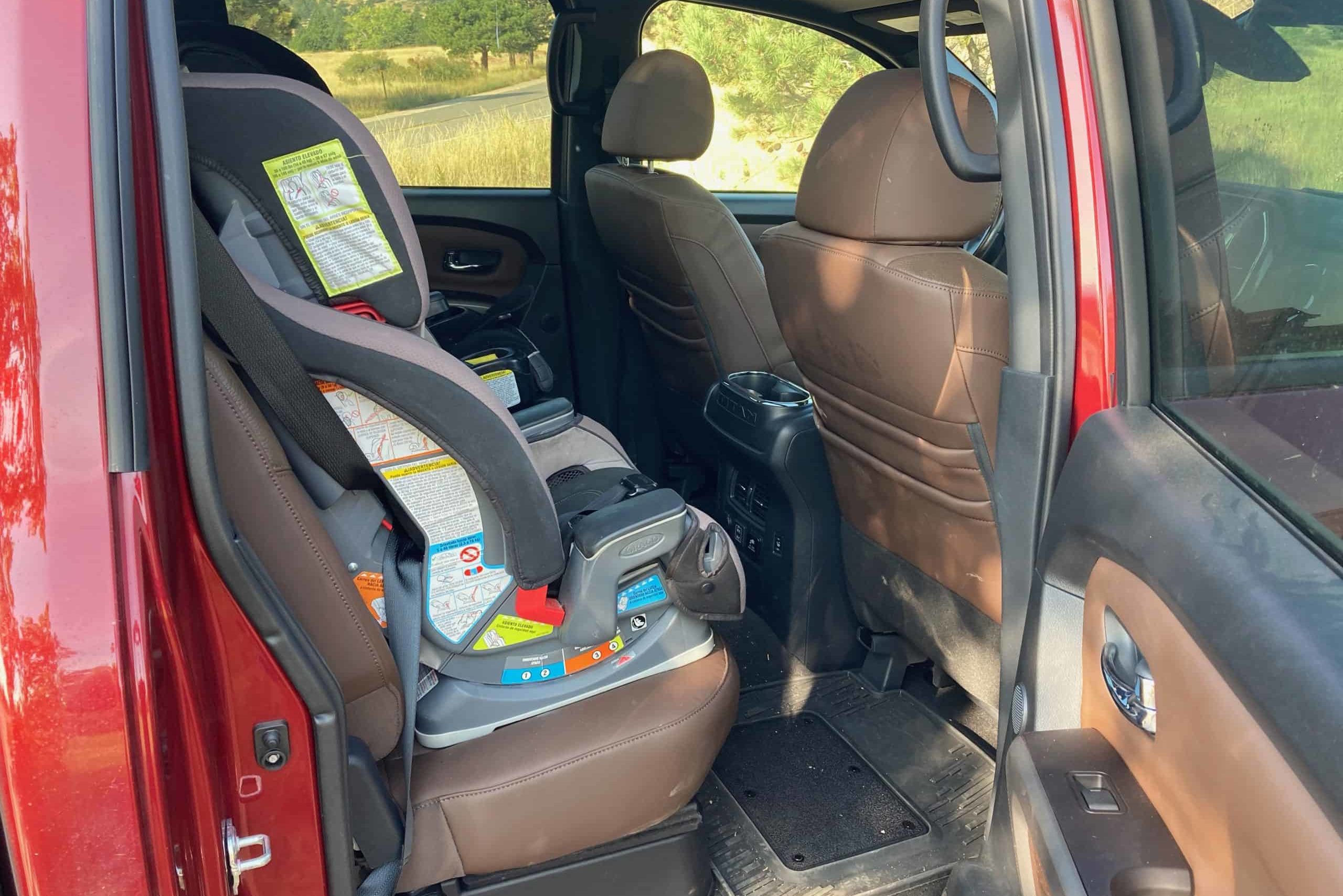 The Nissan Titan XD has a spacious interior. The kid’s car seats fit nicely in the second row with lots of room for their legs. The second-row bench also folds up in a 60/40 split. And a flat floor folds out to reveal around 50 cubic feet of cargo space. 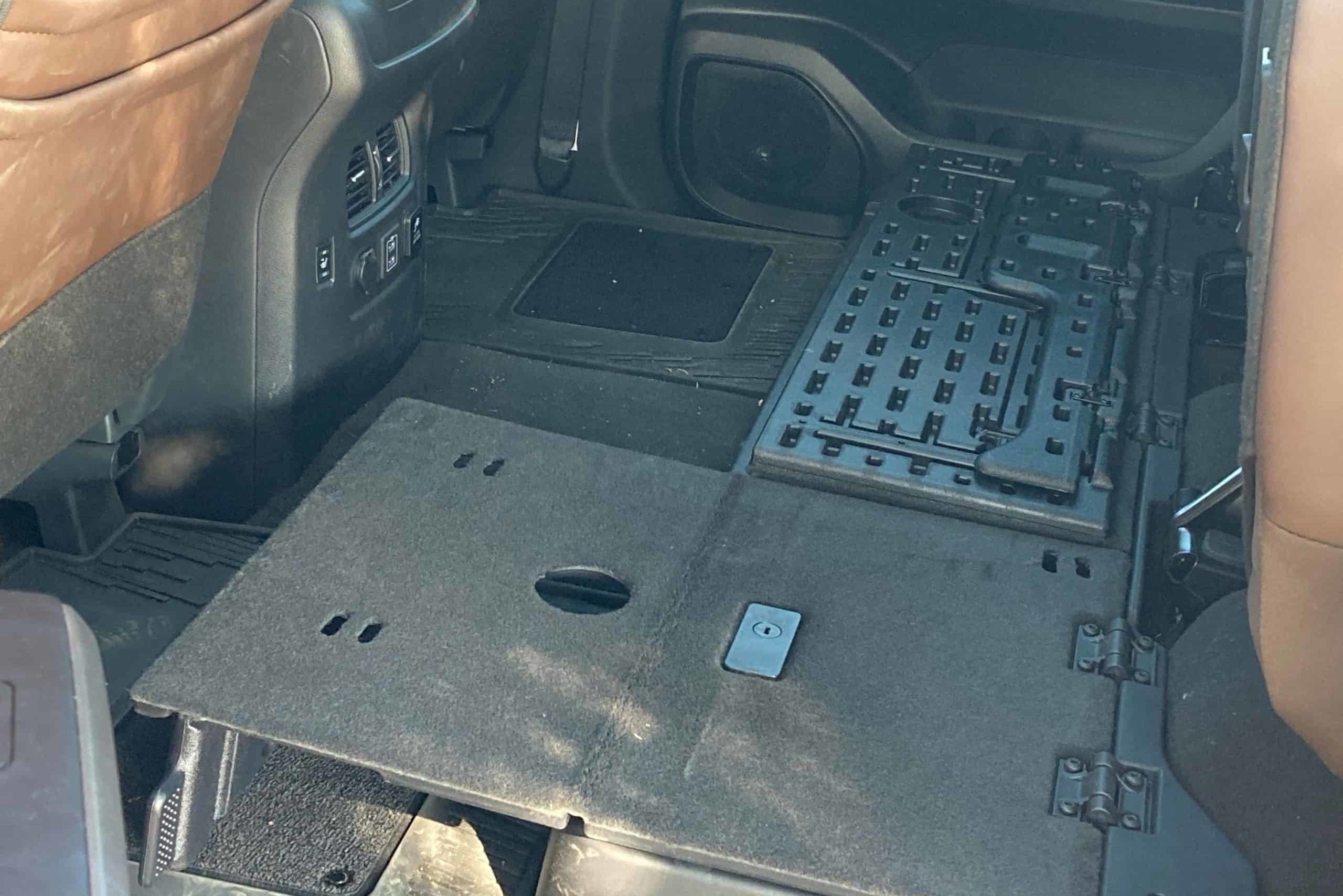 In fact, the 56-inch interior width of the second row meant we could squeeze another small adult in the middle between the two car seats for our camping trip. In front, my wife and I were very comfortable. We were able to move our seats back without worrying about squishing anyone behind us. 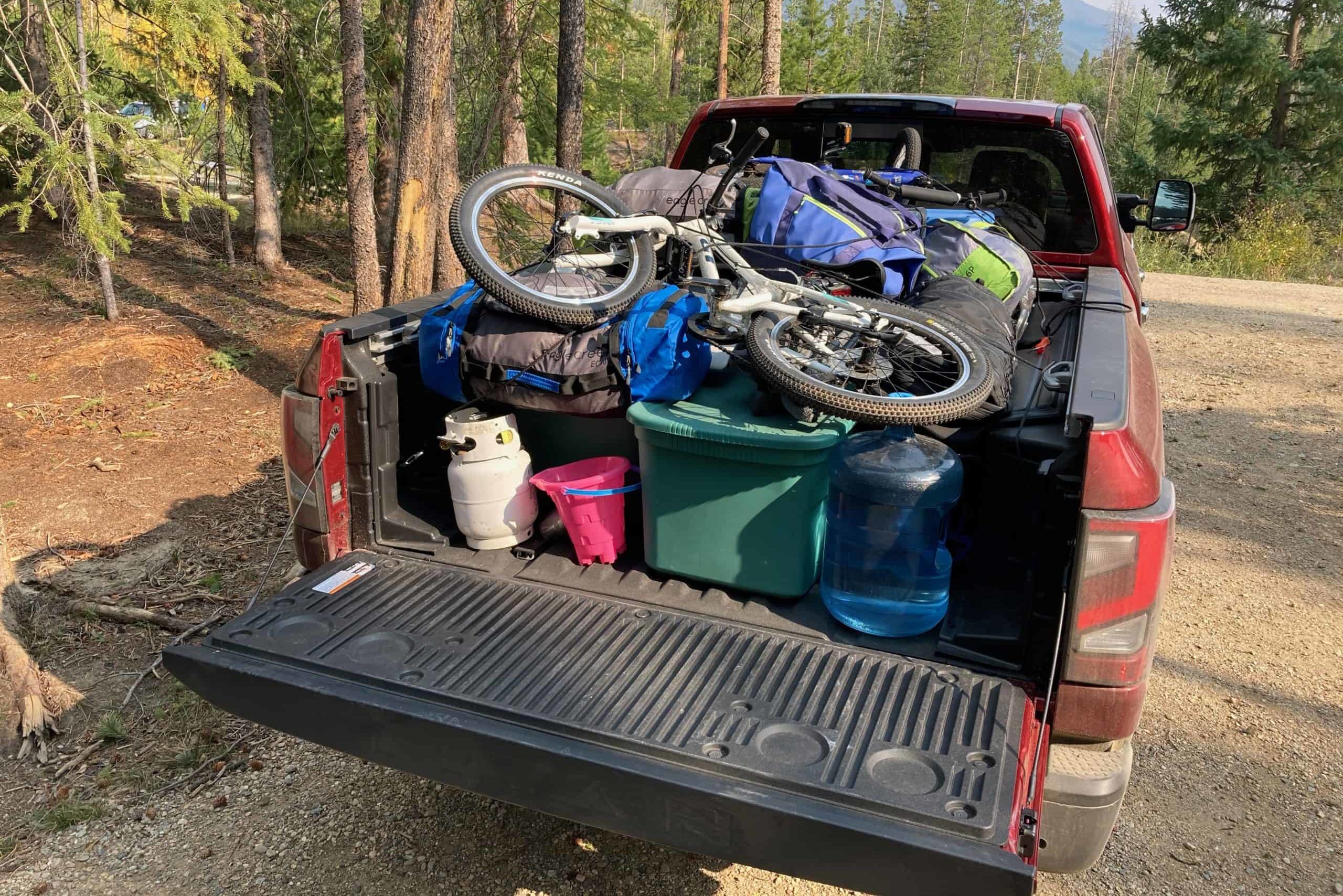 The 6.5-foot bed easily held our camping gear for the weekend. In fact, we were able to throw some extra luxuries (like our Traeger Ranger grill) in the large bed. 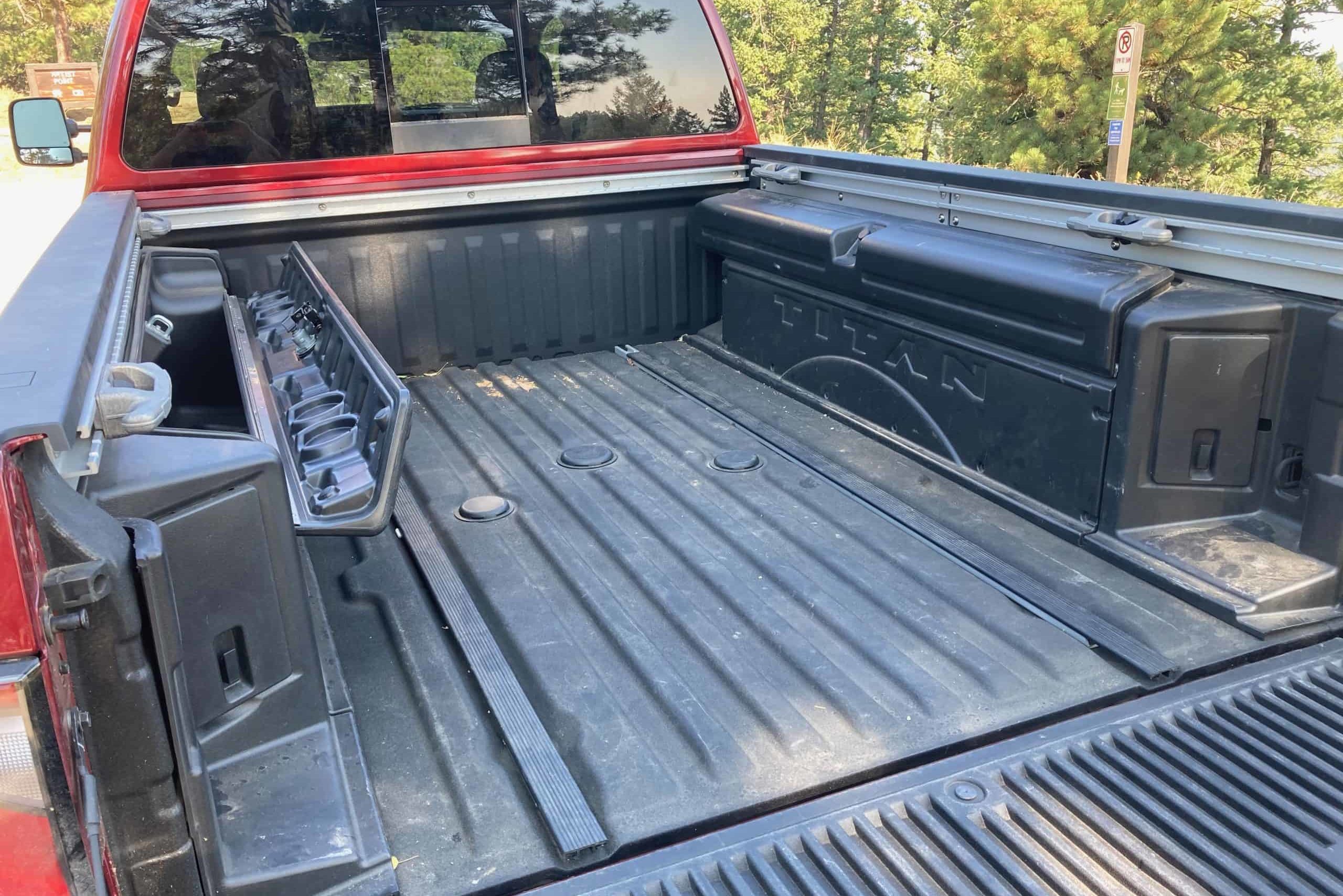 Our test truck also included two optional locking lateral cargo boxes, the Titan Box option for $1,990, which ran the length of the bed. I stashed some emergency gear in them and if this were my truck, I would move the tire changing equipment from under the second-row bench into one of these cargo boxes. I wouldn’t want to remove a kid and their seat on the side of the road to change a tire. 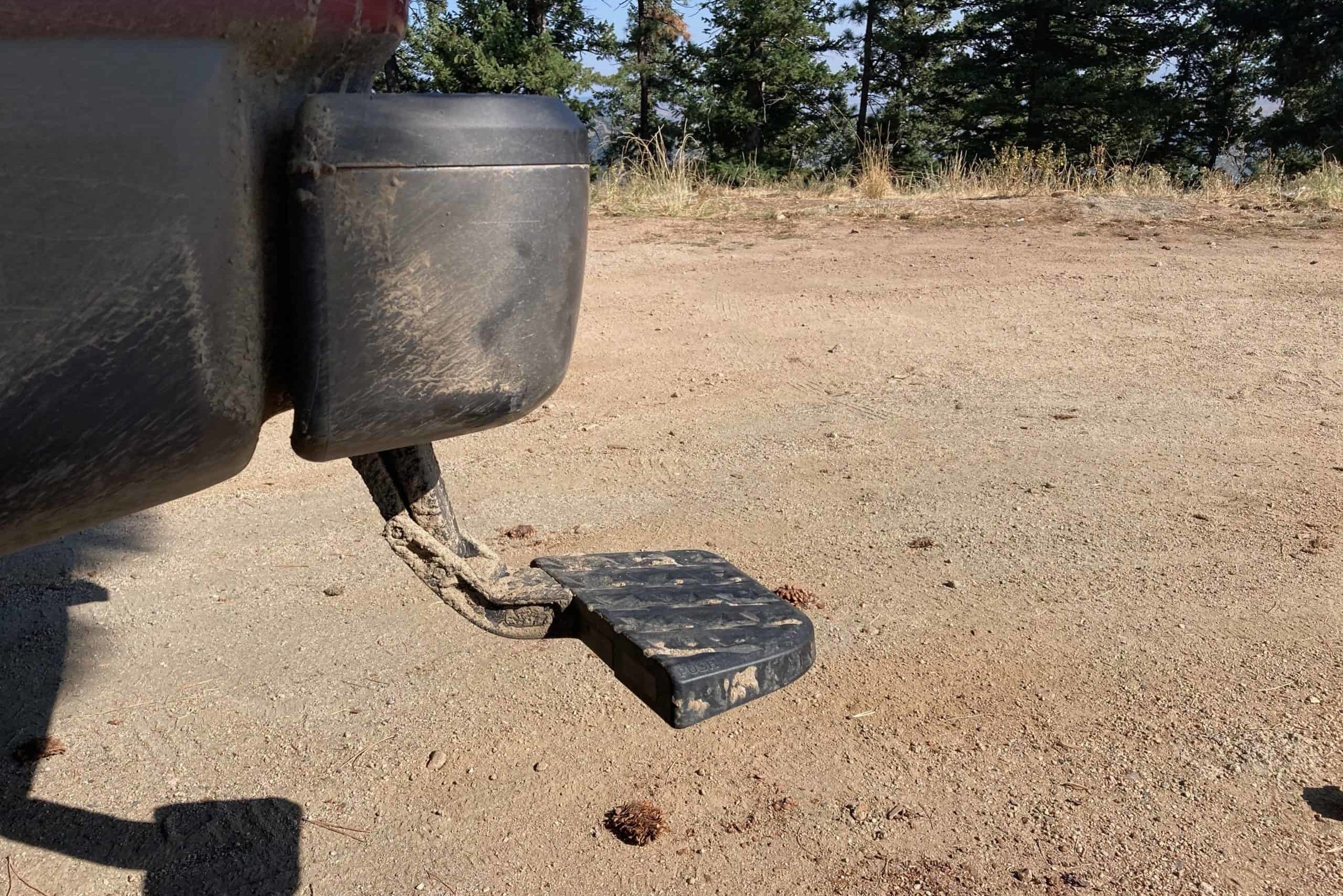 Every trim of the Titan XD, except the base S trim, includes an integrated gooseneck mount. Our test truck also included the optional Rear Bumper Step Assist ($245) which made it much easier to get in and out of the bed. I also loved the dampened tailgate drop. 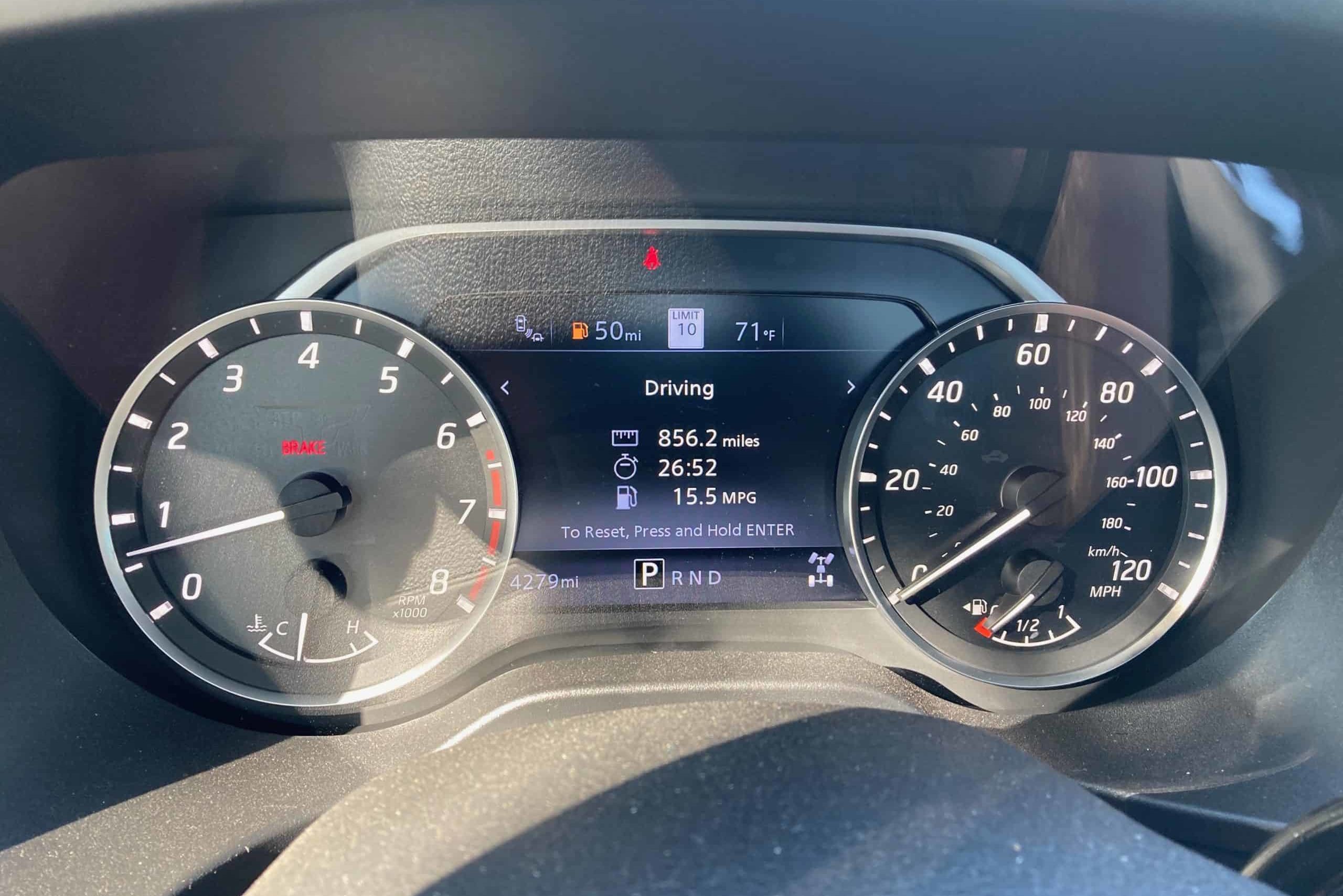 The 2020 Nissan Titan XD is powered by a 5.6-liter V8 gas engine, putting out 400 hp and 413 lb.-ft. of torque through a new 9-speed automatic transmission. That puts it right in the middle of the 1/2 ton pickup pack for horsepower, albeit with one of the smaller engines:

The EPA gas mileage rating for the Titan XD is estimated at 15 city and 21 highway. Over our 800+ miles of testing, the onboard computer put us at a 15.5 mpg average. That is on the lower end of the spectrum for 4×4 full-size V8 trucks, and even more disappointing considering we were mostly on long highway trips and weren’t towing for any of those miles. The weight of our camping gear for our shorter test trip did bring the average down from about 17 mpg established on the longer haul to Crested Butte and back (which was just me and a small overnight bag). 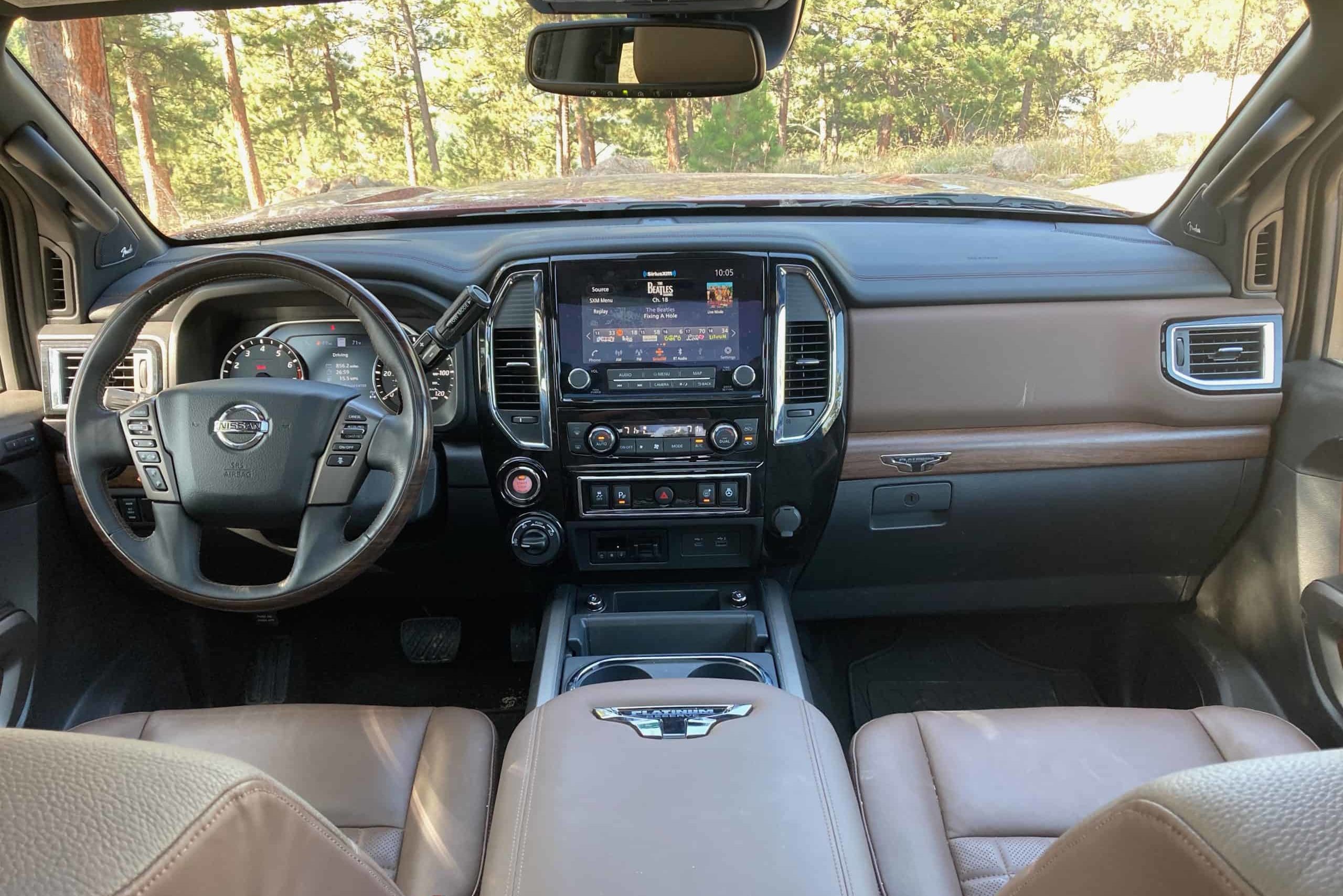 The top of the line Platinum Reserve trim came with all the bells and whistles. The standard equipment list includes Safety Shield 360. With that, you get automated emergency braking with pedestrian detection, lane-departure warning, automatic high-beams, blind-spot monitoring, rear cross-traffic alert, and rear automated emergency braking. It also includes Apple CarPlay and Android Auto. Adaptive cruise control comes with all trims except the base S level.

I got really good at punching the parking assist proximity alarm to shut it off. It comes back on each time the truck is put in reverse and oddly sounds an alarm when I’m too close to an object in front of me. Remember, I’m in reverse. Maybe this would be helpful if I was parked looking down a slope, but mostly it was irrelevant and just annoying.

Nissan is on-board with the USB-C port, which on the Titan XD is found in the center console. USB-C is the standard many portable electronics has gone/is going. We were able to keep our new Apple computers charged while using the Titan’s built in WiFi hotspot on our adventures, which made for good work and entertainment options while on the road. The single USB-A port in the center console was used to connect to the Apple CarPlay system and the (still-holding-on-for-dear-life) 12v socket got a USB-A converter to keep my wife’s phone charged. There’s also plenty of power options for the second row with two USB-A ports, a 12v plug, and 120v AC plug. 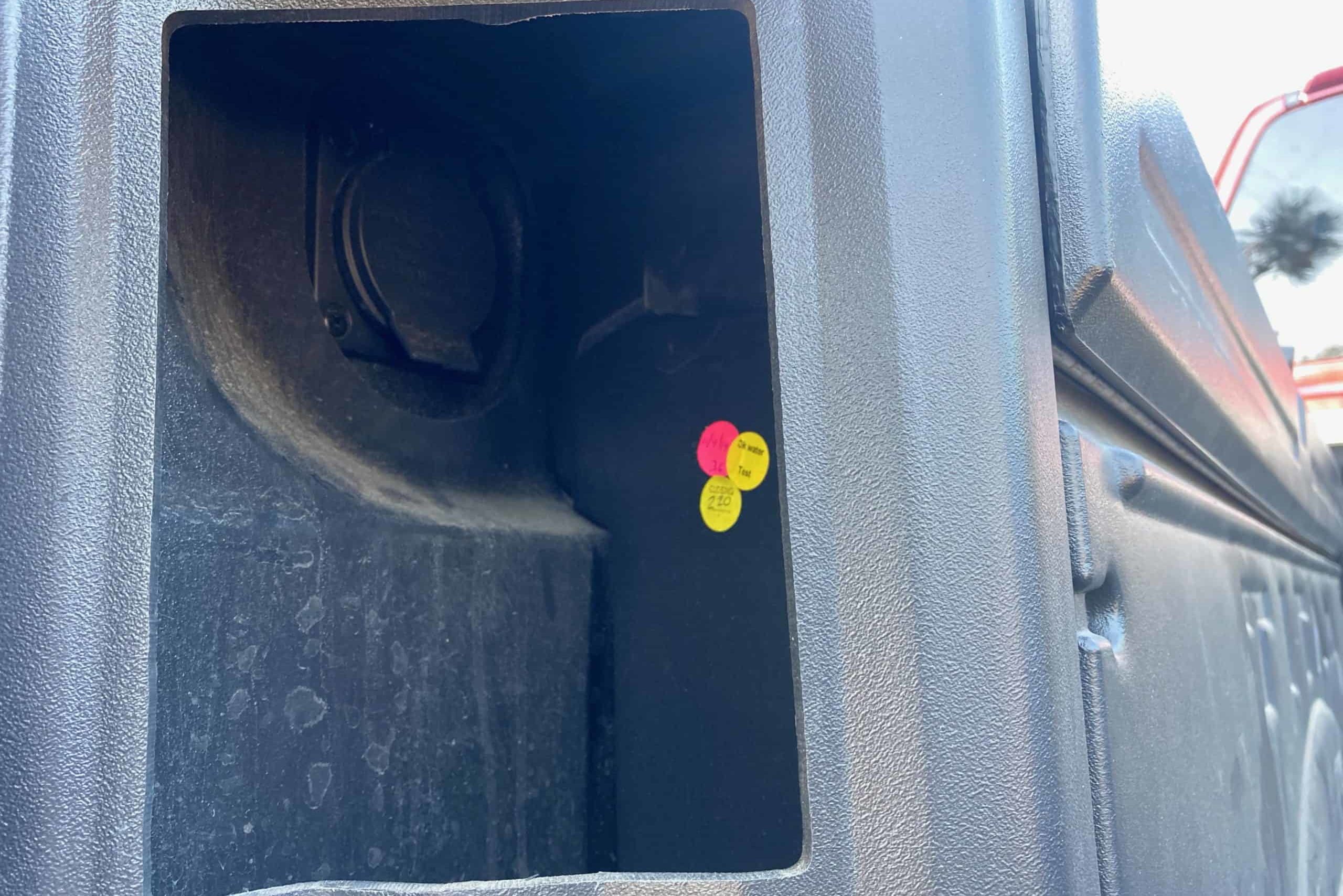 The bed of the truck also has a 120v AC plug. With the Titan Boxes installed, the plug tucks away in a covered cavity. That covered cavity plus the weatherproof flap over the plug makes it a little bit of a challenge to access. It maxes out at 400w while the truck is in park to run power tools and then drops to 150w while driving. We kept our Dometic fridge powered for the drive out, then switched to a secondary battery system once at camp.

The Platinum Reserve (and some of the other upper-level trims) upgrades include external features like a unique grille and wheel fenders and satin chrome exterior accents.

On the inside, you get a 9-inch infotainment screen, a 360-degree camera system, Fender speakers, wood trim and aluminum interior accents, and two-tone leather upholstery with heated and cooled front bucket seats. The heated rear seats will be super nice for when the kids graduate from their car seats. 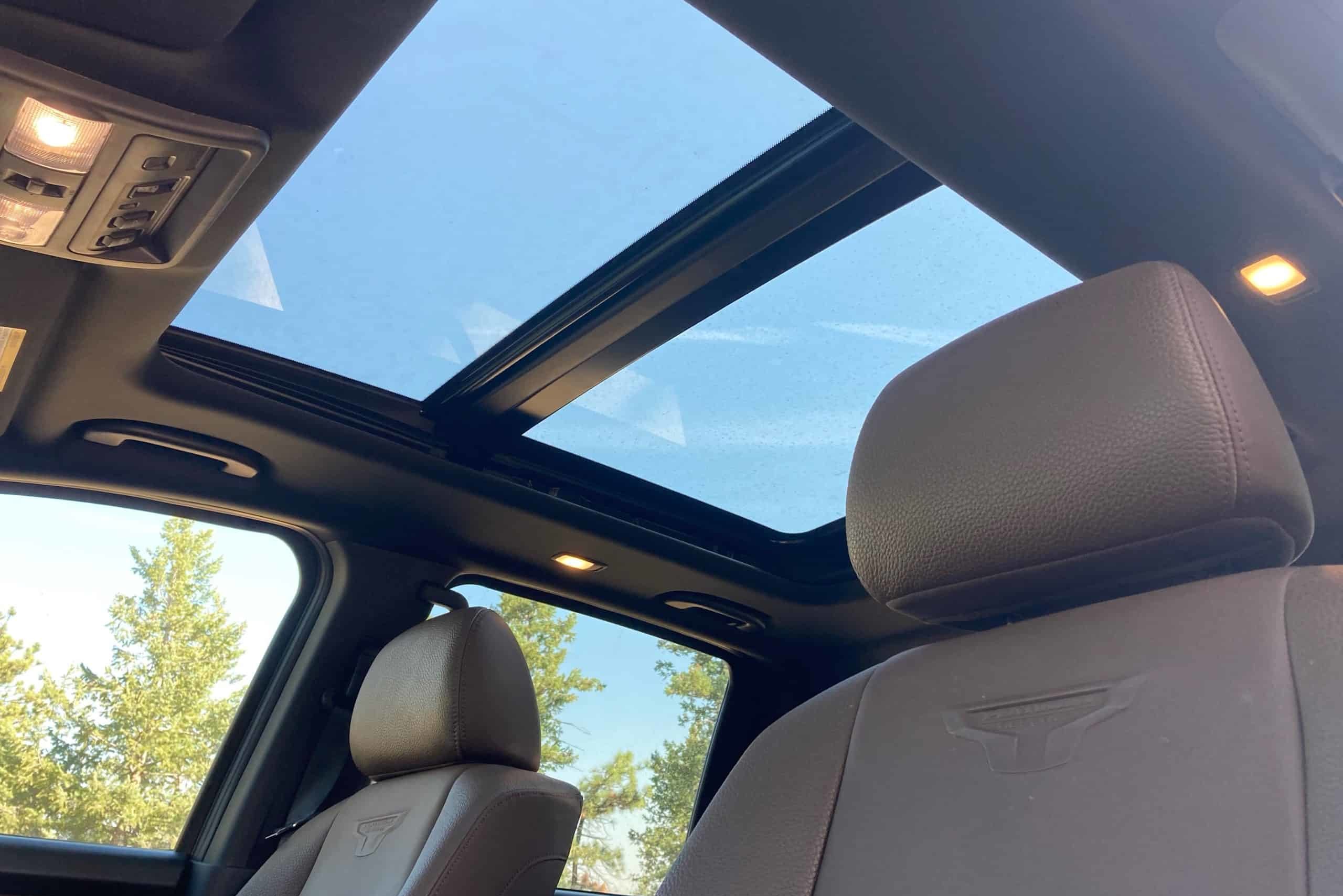 The 2020 Nissan Titan XD was very comfortable. It has soft touch points everywhere the driver and passengers are going to lean during long drives. Nissan’s Zero Gravity power bucket seats are extremely comfortable. They provide good support and are wide enough for all size passengers to be comfortable. The dual-zone climate control is easy and intuitive to use. Missing, however, is a third climate zone for the back seat.

The 2020 Nissan Titan XD is a great choice for families. There’s lots of room in the second row to accommodate either car seats or teenagers. Our truck had a full-length moonroof which gave the back an even more spacious feel. The car seats were easy to install with the LATCH anchor system. My one wish would be for the second-row doors to open a little wider. This would make it easier to load the car seats or other cargo. Second-row passengers get power ports to keep personal electronics running. And rear seat heaters help keep the complaining in the back seat to a minimum on cold mornings. 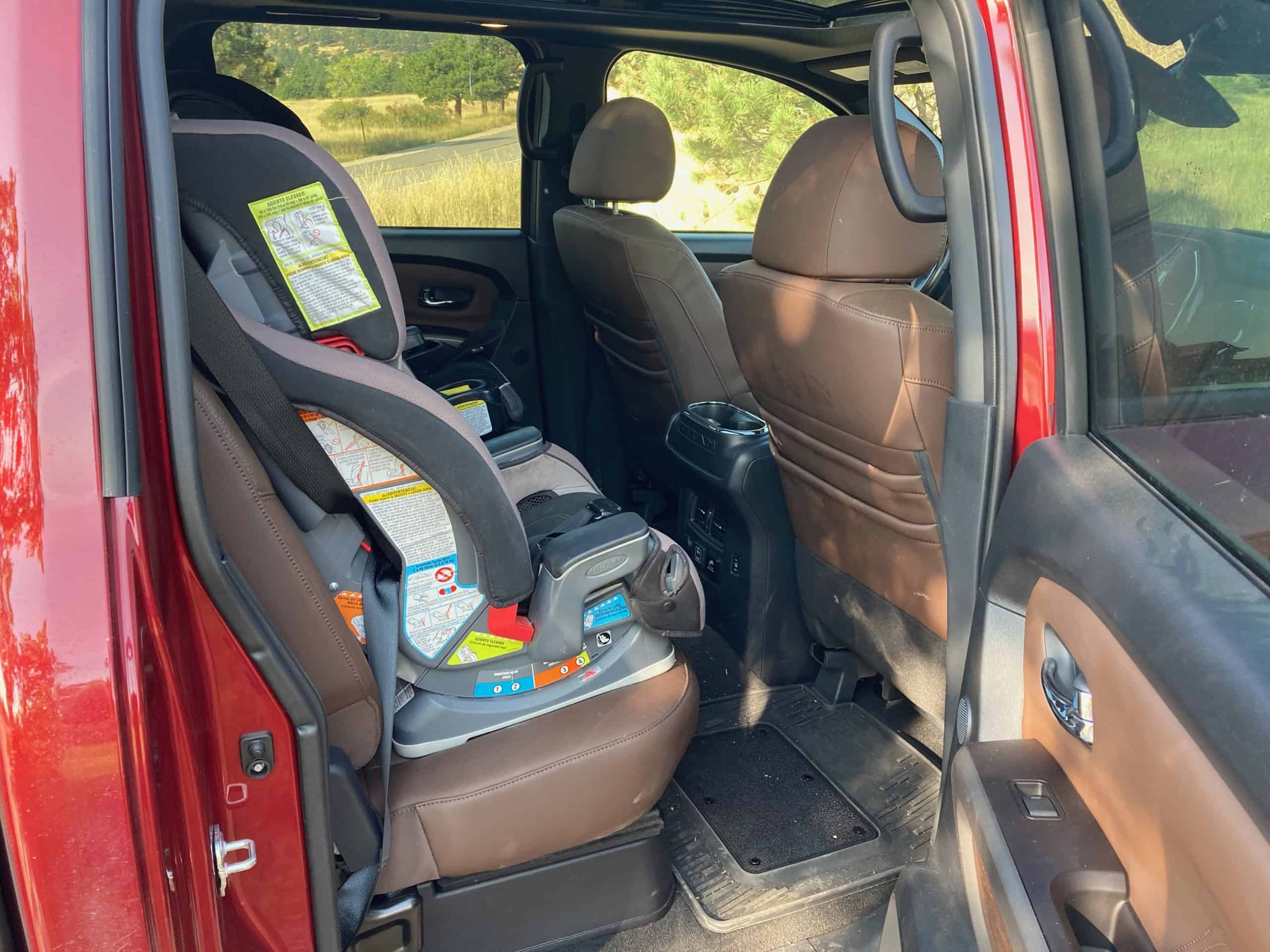 The Nissan Titan XD is a very comfortable and capable truck for family recreational use. The large interior is comfortable for everybody, including second-row passengers, for the long haul. Titan XD will tow all but the largest and heaviest of travel trailers—plenty for most RVing families. It’s comfortable to drive on- and off-road, has a host of safety features, and offers a smooth ride for passengers.

A bit disappointing are the little annoyances like rear doors that don’t quite open wide enough and the lack of rear-seat climate control. With a base price of a Titan XD starting at $45,000 (in part because it only comes in the 4WD, crew cab, 6.5-foot bed configuration) and sub-par towing and payload for its class this truck targets a fairly narrow range of customers.

Also worth mentioning, Nissan provides one of the best warranties in the full-size truck market at 100,000 miles or five-years. If you’re thinking about buying a Titan XD and worried that there might be big upgrades for 2021, don’t sweat. The 2021 Nissan Titan XD will be nearly identical to the 2020 model, so it might be worth finding a deal on a 2020 truck as we close out the year.


The Best Of 2021 Tesla
Ultimate Car Wash Kit Review And Buying Guide For 2020
10 Obscure Off-Road SUVs and Trucks That Are Mostly Forgotte...
2021 Ram TRX Launch Edition VIN #001 Up For Auction For A G...
11 Tips for Turning Your Truck Into a Show Truck
10 Best Dually Trucks Ever Made