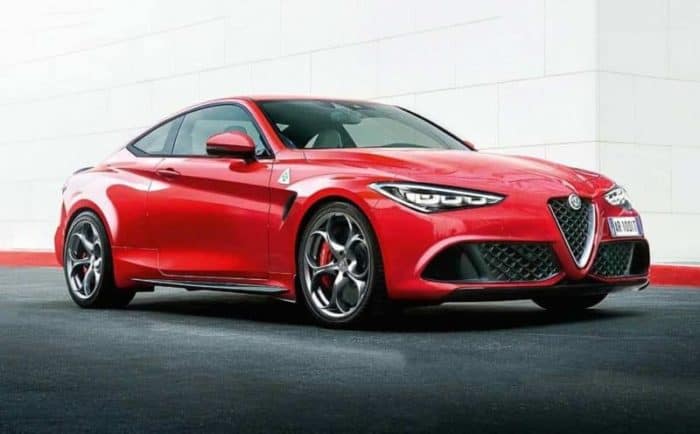 Alfa Romeo’s ambitious plans from a decade ago have crashed and burned. Back in 2010, the iconic Italian automaker’s brass said they would be selling more than 500,000 units worldwide by 2014. In the end, they sold less than 70,000. Fast forward to 2018 and they’re still not even close. Needless to say, the 2021 Alfa Romeo lineup won’t be able to fulfill this goal either, but the Alfa executives have already forgotten this by now anyway.

Speaking of their global sales for 2018, they amounted to exactly 122,533 vehicles. Alfa’s biggest markets are Italy and the U.S. where they’ve delivered 43,112 and 23,800 units respectively, but neither is particularly effective for the famous brand.

In Italy, the entire Alfa portfolio is being outsold by an FCA division consisting of a single outdated city car – Lancia and its model Ypsilon. That speaks volumes about the trust Alfa Romeo enjoys in its home market. So, how are they supposed to make that much needed push on a global level is beyond me?! Probably beyond their understanding as well.

On the U.S. market, on the other hand, Alfa Romeo is nothing more than a fringe player in the premium segment. Things have been looking up recently as the FCA division has managed to almost double its sales compared to 2017, but 2019 figures are again on the downturn. By the time 2021 is upon us, Alfa will have had an expanded portfolio of models which should help it grow as an automaker, but the end result almost certainly won’t be meeting their initial expectations.

Let’s take a closer look at what the Alfa Romeo has in store for us for MY 2021.

Alfa needs to widen its range of available models as they’re practically limited to the Giulia sedan and Stelvio SUV at the moment. This is where one of their most iconic nameplates from decades past kicks in. The all-new GTV coupe will basically be a 2-door Giulia, albeit with a lot more sportier driving dynamics and tons of potential that the 4-door simply doesn’t possess.

Although it’ll be based on the same Giorgio platform as both the Giulia and Stelvio, the GTV will still be a car with its own identity – like pretty much any Alfa Romeo ever made after all. Design-wise, the new coupe won’t stray too far from the path already established by the Giulia sedan. Being shorter and lower than its sedan sibling, however, should help it achieve much more enthusiastic driving dynamics and handling.

The GTV’s interior will closely resemble that of its sedan counterpart, albeit with a few unique details of its own. Thing is, by 2021, the Giulia is expected to undergo a mid-term facelift which will largely determine the future GTV’s outlook. As far as the available features are concerned, there shouldn’t be any differences between the models. This means that the Apple CarPlay and Android Auto integration will be standard from the get-go, together with plenty of advanced electronic safety gear.

The two are also expected to share the same powertrain lineup, but with a bit of a twist. A 2.0L turbocharged 4-cylinder with 280 horsepower should serve as a base engine, while a 2.9L twin-turbo V6 found in the performance-oriented Quadrifoglio units looks like a probable option. However, the latter is also expected to get a hybrid assist system which could raise its output from 505 ponies to over 600 horsepower, effectively making it one of the most powerful Italian non-exotic cars ever produced. As per usual, a rear-wheel drive setup will be standard while a rear-biased all-wheel drive should be available as an option.

The 2021 Alfa Romeo GTV is expected to make an official appearance at one of the upcoming major auto shows before hitting the showrooms later on. Expect it to command a slightly higher price tag than the Giulia sedan which currently starts from just under $40,000. Needless to say, the Ferrari-sourced V6 will cost a lot more than that. 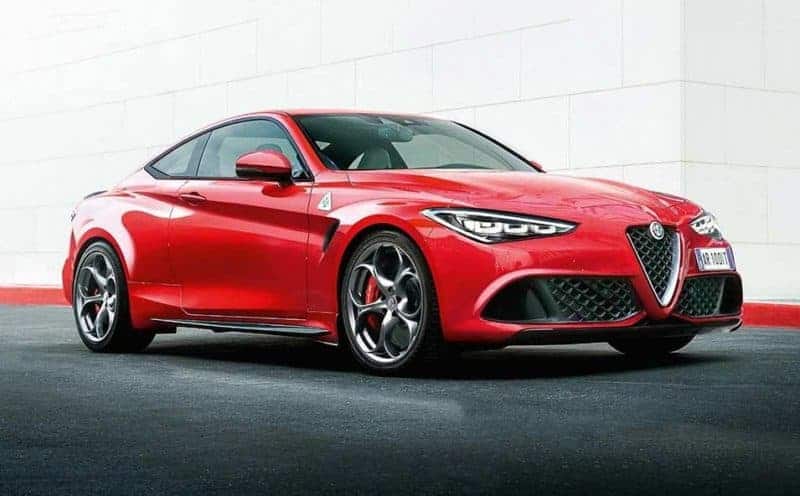 Although it’s arriving to the market much later than it probably should have, it’s still better to be late than not to arrive at all. The Tonale is another all-new Alfa model for MY 2021 and it should become their best-selling one within a year or two. That being said, the compact crossover is probably Alfa’s most important project in the last decade or so.

The concept car bearing the same name has already been presented at the 2019 Geneva motor show. The concept’s name itself comes from another mountain pass in northern Italy (just like Stelvio), so you can safely bet on it to make it into production. As far as design is concerned, the smaller Tonale borrows most cues from its larger sibling, yet manages to incorporate a few bits and pieces from the concept car as well. Unlike the Stelvio, however, the smaller crossover will ride on a front-wheel drive based platform.

The Tonale’s interior is still somewhat of a mystery, but expect it to be less refined than that of its larger counterpart. The compact crossover should, however, offer enough convenience and tech features to remain competitive in a segment that’s home to the likes of Audi Q3 and Volvo XC40.

The Italians are prepared to offer their newest crossover with a hybrid powertrain. Which one though – still hasn’t been decided. Aside from offering a hybrid version, the 2021 Alfa Romeo Tonale should also be available with a 2.0L turbo four which generates 280 horsepower in other Alfa applications.

The all-new compact luxury crossover from the venerable Italian brand should be presented at some point in early 2020, and arrive to the dealerships in time for model year 2021. It’ll likely start from somewhere north of $30,000 with plenty of room for upgrades. 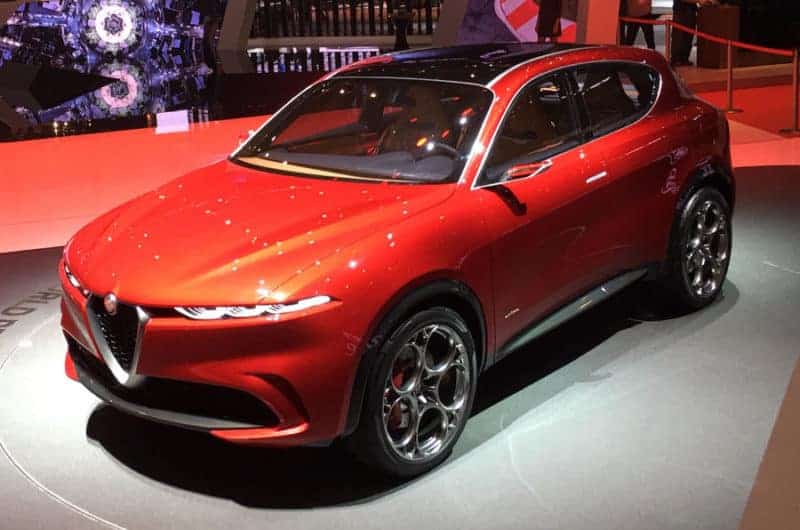 Introduced for MY 2017, the Stelvio is currently Alfa’s bread and butter model with more than 12,000 units marketed in 2018, surpassing the Giulia sedan by meager 500 units or so. The luxury crossover is scheduled for a mid-term facelift in 2021 which coincides with the introduction of the aforementioned all-new models.

One of the most stylish crossovers on the market design-wise won’t be subjected to substantial overhaul, however. Instead, Alfa will keep things simple and straight to the point. New proportions to the front and rear fascia elements are everything they’re required to do, after all. The Stelvio will also incorporate new all-LED headlights instead of the outgoing bi-xenon units.

Interior is in for a similar overhaul. Although changes will be kept to a minimum, the 2021 Stelvio will still get a full digital display and some minor cabin tweaks to go alongside it. Also expect new materials and some shifts in equipment between different trims. Unlike before when precious few advanced safety features and driver’s aids came as standard, the facelifted Stelvio is expected to offer at least blind-spot monitors and forward-collision warning from the get-go.

A 280-horsepower 2.0L turbocharged inline-four and a 505-horsepower 2.9L twin-turbo V6 will carry over as Stelvio’s go-to powertrain choices. The former can be obtained across most of the range, while the latter only comes with the fabled four-leefed clover badge. What’s more, the base turbo four is expected to receive a mild-hybrid assist setup which will further boost its output while simultaneously increasing its fuel economy. Both the rear and all-wheel drive setups will remain available, as well as an 8-speed automatic transmission.

The facelifted Stelvio is expected to arrive by mid-2020 as an early 2021 model and its prices will reflect those of the current models. The entry-level will continue to retail for a little over $41,000, while the performance-oriented Quadrifoglio unite require double that figure. And that’s before insurance penalties. 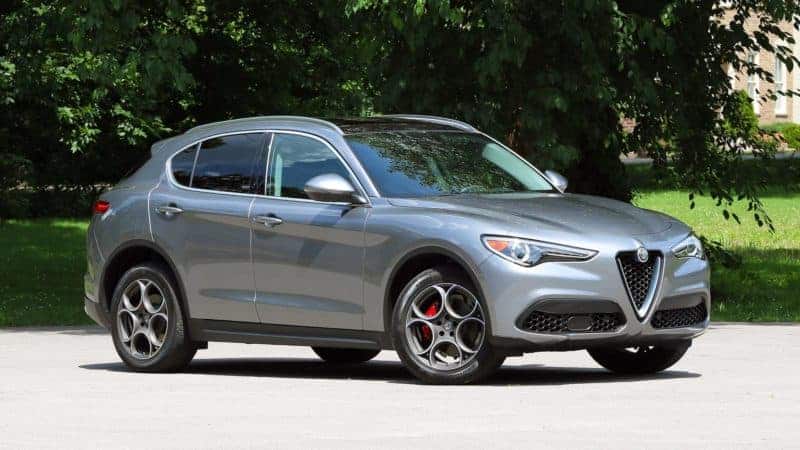 What’s Not in the 2021 Alfa Romeo Lineup

The entry-level luxury sedan represents everything the Italian automaker used to stand for over the years. A stylish sedan with plenty of grunt under the hood, and above average driving dynamics and handling for its class. Now that they’re, much like any other automaker out there, shifting towards crossovers and SUVs, their only sedan in the U.S. is slowly but steadily losing favor across the board.

Introduced during now-distant MY 2016, the Giulia never managed to capture the public’s imagination which it arguably deserved. Being one of the most beautifully designed cars in its segment obviously isn’t enough nowadays. Although it’s due a mid-cycle facelift, nothing official has yet come out of Alfa’s camp. We still believe that the 2021 Giulia will receive some subtle improvements like the Stelvio with which it shares the same platform.

Don’t expect too many changes on the inside, however. The base model offers just enough standard features to qualify as an entry-level luxury car as Apple CarPlay and Android Auto integration are standard, but advanced safety gear requires additional expenses. Only a rearview camera and rear parking sensors are standard from the get-go. This, however, might change come MY 2021’s time.

Most Giulia models are fitted with a 280-horsepower 2.0L turbocharged 4-cylinder engine paired with an 8-speed auto and available in both the rear and all-wheel drive configs. An optional 505-horsepower 2.9L twin-turbo V6 is only offered with Quadrifoglio models, but is limited to a rear-wheel drive setup. Also, we wouldn’t exclude a mild-hybrid model as a possibility.

The Alfa Romeo Giulia starts from just under $40,000, but becomes expensive rather quickly. So much in fact that the powerful Quadrifoglio models require at least $75,000. That’s a lot for a car that, sadly, exhibits its fair share of reliability issues. Then again, it wouldn’t be an Alfa Romeo if it wasn’t flawed. 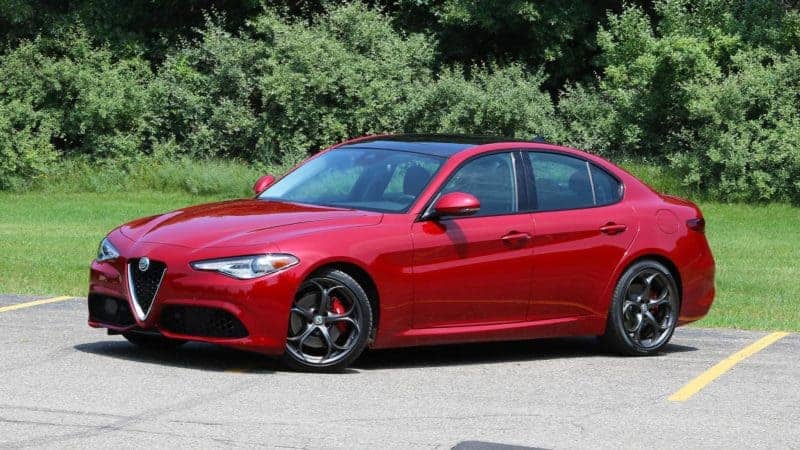