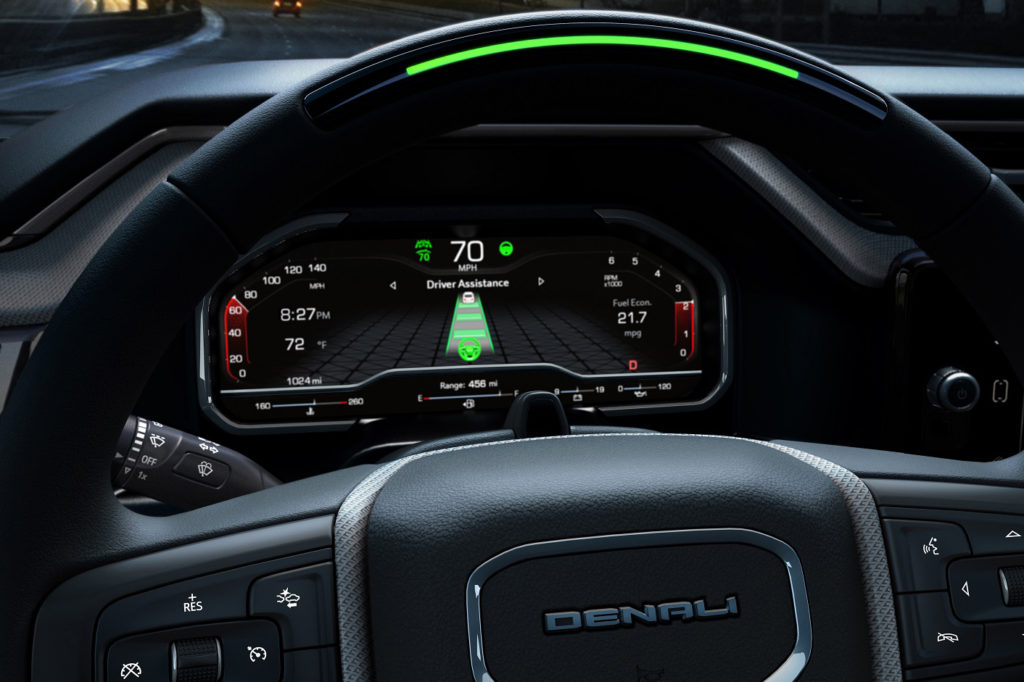 Have you ever dreamed of setting the cruise control and crushing those highway miles with ease while towing? This futuristic driver aid is coming next year by way of a new and improved version of GM’s Super Cruise hands-free driving system. GMC will bring Super Cruise towing to market with two of its 2022 model year trucks, first in the 2022 Hummer EV pickup and then in the 2022 GMC Sierra 1500 Denali.

The Latest Evolution Of Super Cruise

The arrival of Super Cruise to the GMC brand is a big deal, as Cadillac had been long seen as the sole owner of the technology since it first appeared a few years ago. We all knew that GM would bring the system to the other brands in its stable, however. Still, it appears that things are just now starting to move forward in that particular regard, with the Hummer EV pickup and now the Sierra 1500 Denali getting in on the Super Cruise action.

For those that need a brief refresher on how Super Cruise works, the system is a very ingenious piece of technology with LiDAR mapping data being used in conjunction with real-time camera feeds and GPS to create an autonomous driving experience. The system has been slowly evolving over the past few years and was recently upgraded to allow for hands-free lane changes.

Hands-Free Towing For The Masses: Almost

The big news here is that Super Cruise will be capable of hands-free towing, but GM did not elaborate on any further details beyond this proclamation. Instead, we have one lone teaser photo (lead image above) that appears to shed some light on what it could bring to the truck. Buyers who choose to equip the system appear to get a fully digital instrument cluster with a revised steering wheel also being added to help accommodate the rim-mounted lighted indicator strip that’s a prominent Super Cruise giveaway.

As for how all of this will play out in regards to towing a trailer? We suspect that Super Cruise will use an extended range blind spot monitoring system and additional sensors to accommodate the trailer’s extra length. Ford has already debuted a similar blind-spot related feature on the 2021 F-150, which can monitor the trailer’s sides to help prevent passing vehicles from going unnoticed in the lengthened blind-spots. In the case of the GMC though, this feature would also be most likely combined with an extended coverage lane-keep system to help the trailer and the truck stay in the same lane when going down the freeway. While Ford’s system is slightly similar, it can’t fully match what Super Cruise brings to the table.

The big question we have though, is whether Super Cruise’s newly added automated lane change feature will be available when a trailer is hooked up to the truck. We can imagine that achieving this feat would require a lot of time and effort to make it work effectively, and we’ll not be shocked if that gets disabled while the truck is towing a trailer behind it.

For the moment, the Sierra 1500 Denali appears to be the only GMC truck that’s slated to get Super Cruise for the 2022 model year, and only GM product to get the Super Cruise tow feature besides the Hummer EV. This makes sense, as the Denali brand remains the top tier cutting edge products in the GMC stable.

The 2022 Sierra 1500 Denali will also benefit from a modest redesign. The afore-mentioned photo (seen at the top of this post) hides many of the interior’s finer details, but appears to show a new design for the upper dash-mounted air vents and a tweaked dash hood layout. The truck will also have revised exterior styling, but GMC has not released any images yet, so we’ll have to wait a while longer to find out more.

The 2022 GMC Sierra is currently in its development phase, but the confirmation of Super Cruise’s entry into the 1500 Denali model could indicate that the truck has reached a key point in this regard. This milestone could perhaps indicate that we’ll hear more about the truck early in the new year. With the Ford F-150 being heavily revised for 2021 and the Ram 1500 still disrupting the segment, the Sierra 1500 will need to face these incoming threats head-on. Embracing and introducing new technologies first looks to be the continued strategy of GMC to stay competitive in the full-size American truck market.

Would you hit the cruise control button while towing?