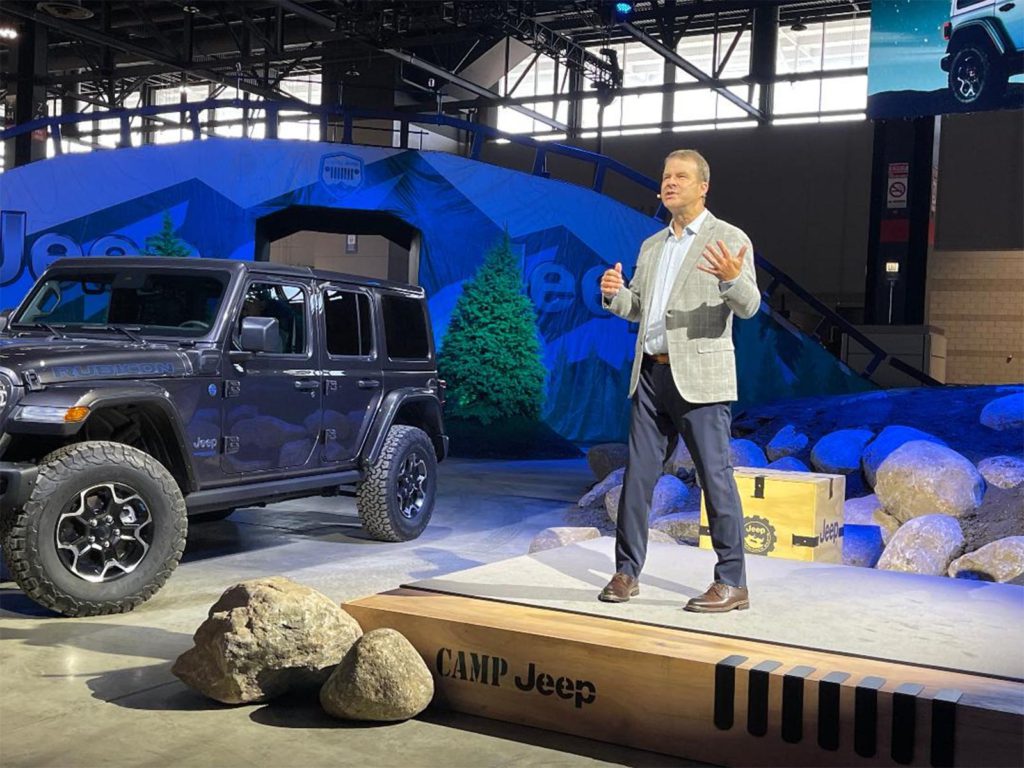 Jeep marked its 80th anniversary this week by revealing what will become the off-road brand’s most dramatic transformation since it first began rolling out towards the front lines in World War II — electric Jeeps.

The makeover actually began in April with the launch of the new Wrangler 4xe, Jeep’s first plug-in hybrid model. Demand has far outstripped expectations, with dealers already ordering every one of the PHEVs (plug-in hybrid electric vehicles) Jeep can build through the end of the year. But it’s only the first step, according to global CEO Christian Meunier, who says Jeep will soon have 4xe versions of every product in the line-up — along with pure battery-electric, or BEV, models in every segment it competes in.

“Electrification is the big opportunity for Jeep,” said Meunier, during a media backgrounder earlier this week. “It’s an opportunity to make our products even more capable.” 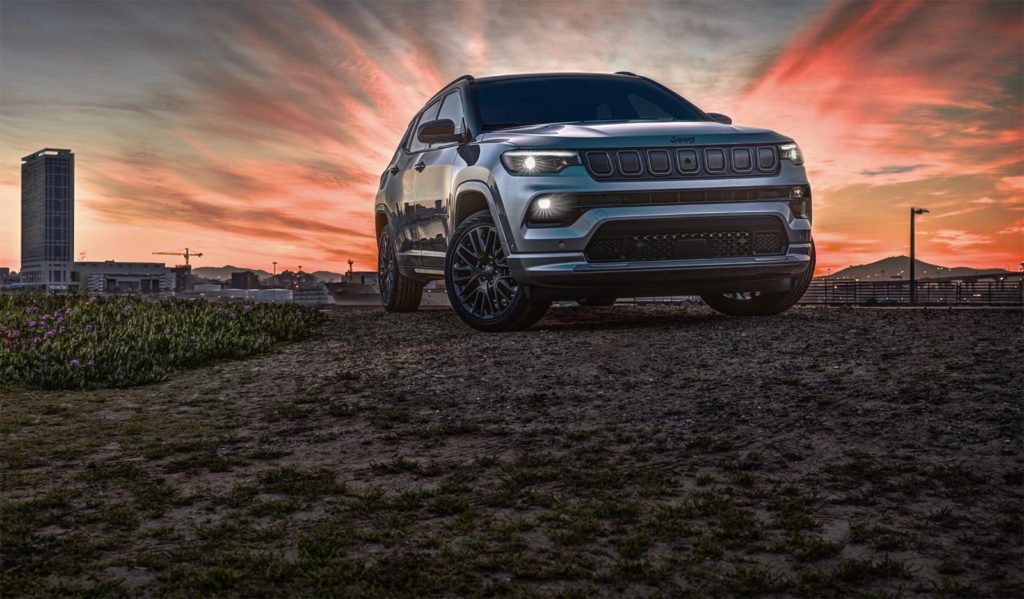 Like many in the industry, Jeep officials were initially skeptical about battery power, said Jim Morrison, the brand’s U.S. boss, during an interview at the Chicago Auto Show. The automaker simply viewed battery power as a way to comply with increasingly stringent emissions and fuel efficiency standards. But something happened along the way. The plug-in system not only helped reduce emissions and boost fuel economy but deliver an assortment of other benefits.

The Wrangler 4xe puts out 375 hp and 470 lb.-ft. of torque. But even those seemingly impressive numbers tell only part of the story. The SUV’s two electric motors deliver virtually all of their rock-crawling torque the moment they start turning, quickly earning the plug-in a reputation for being especially capable off-road. 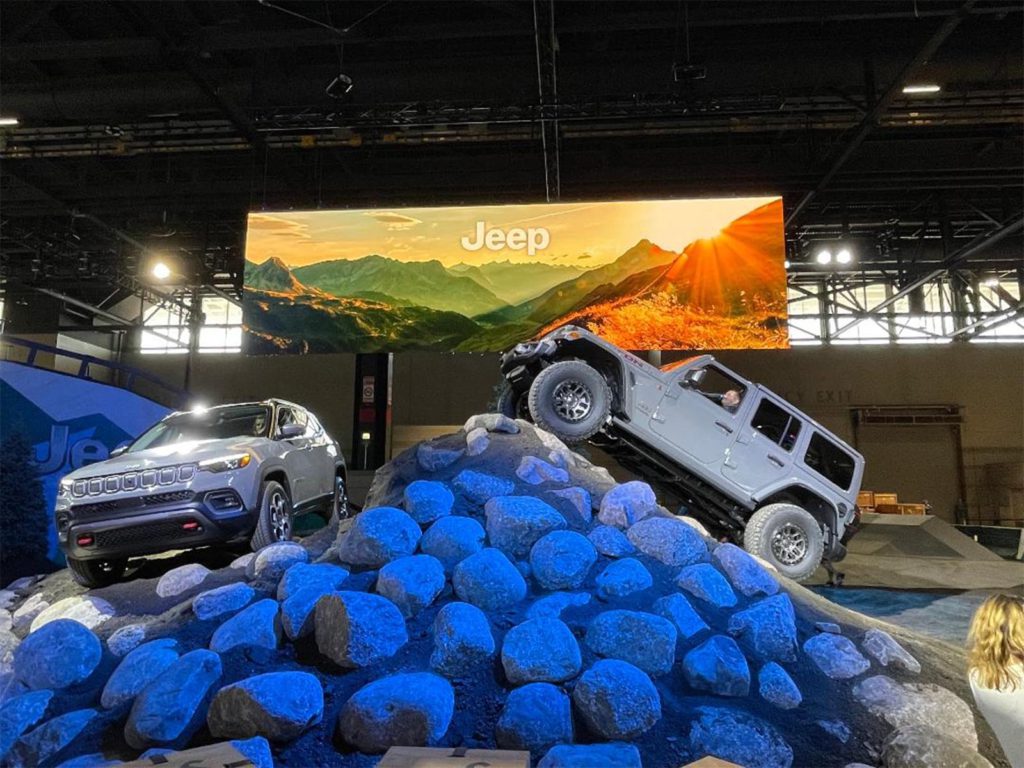 The electric drive system allows a motorist to shut off the Wrangler’s gas engine entirely, to operate in near silence when driving off-road. On pavement, the SUV can manage up to 21 miles in electric-only mode while also boosting mileage when its 4-cylinder gas engine fires.

Demand for the Wrangler 4xe took off immediately, accounting for 20% of the model line’s total demand during the second quarter — and helping propel that most classic of Jeep models to an all-time sales record.

A second 4xe model will reach showrooms later this year as an option on the completely redesigned Jeep Grand Cherokee and new three-row Grand Cherokee L. And a plug-in hybrid version of the revamped Jeep Compass debuting in Chicago is expected to follow — though Morrison declined to say precisely when.

By mid-decade, every Jeep product line will have a plug-in hybrid option, according to Meunier. And there also will be full BEVs (battery-electric vehicles) in “every segment” in which it competes, he added. The first all-electric Jeep is due in 2024.

The new emphasis on electrification is part of the broader transformation of Jeep’s parent, Stellantis — which was formed early this year by the merger of Fiat Chrysler Automobile and France’s PSA Group. Stellantis CEO Carlos Tavares said this month that over the next five years, the automaker will invest $35 billion to add plug-based products.

Jeep’s electrification plans are among the most aggressive of any of the 14 Stellantis brands. And it appears, at least for now, to be paying off.

What’s particularly rewarding, said Morrison, is the way the Wrangler 4xe is appealing to both classic Jeep buyers as well as those who would never have given the brand a second thought because of its reputation for building gas-guzzlers.

“We’re seeing customers who wouldn’t have considered a Wrangler because it was politically incorrect,” he said. Still, they’re now able to buy an SUV that has great off-road capabilities and can run entirely on battery power for up to three hours at a time off-road — and in near silence.

The initial success of the Wrangler 4xe is paying off in another way. U.S. car dealers have generally been skeptical of plug-based products and unwilling to invest in new service technology and charge ports. But, said Morrison, they’re lining up for the new Jeep plug-in. Dealers have now ordered every Wrangler 4xe the brand’s Toledo, Ohio assembly plant will be able to produce through the beginning of 2022 — though there are some still available for retail buyers.

It is, of course, possible that Jeep is just seeing an initial burst of enthusiasm. Still, both Morrison and Meunier are confident the current demand is sustainable and, if anything, will build even further in the coming years as new products come to market.

For information on electric Jeeps and more, click here.


12 Innovative Electric Dirt Bike Machines For Tackling Tough...
Rent An All Electric Taycan Directly From Porsche
Camaro has a Monster V12 Under the Hood
Digital Nomads Rejoice: The Nissan Office Pod Concept Slays ...
10 Awesome Electric Motorcycles Worth Throwing A Leg Over [B...
Best of 2019 Toyota