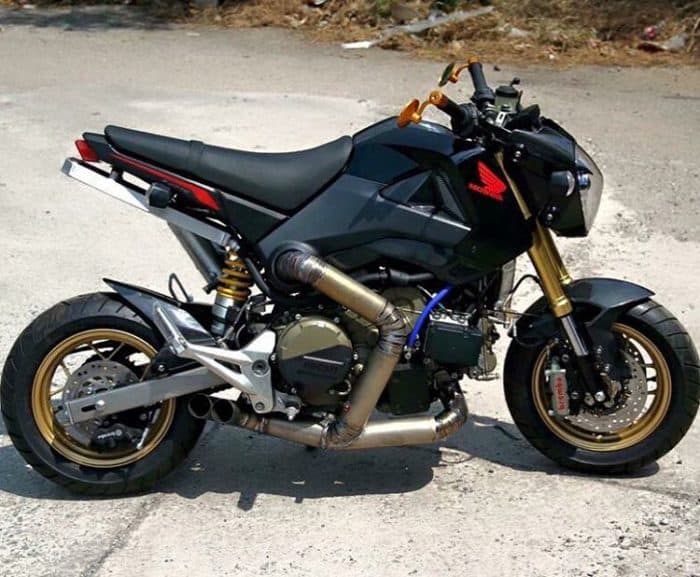 There’s no denying that the Honda Grom is a motorcycle that has real cult status. It’s small, practical, economical, and bucket loads of fun. It’s the perfect tool for a number of tasks, so why would anyone want to improve it? More importantly, how would anyone improve it? Well, we’ve got a selection of curious Honda Grom custom efforts for you to marvel at. Here they are!

The Stretched Grom by Adam Barrington 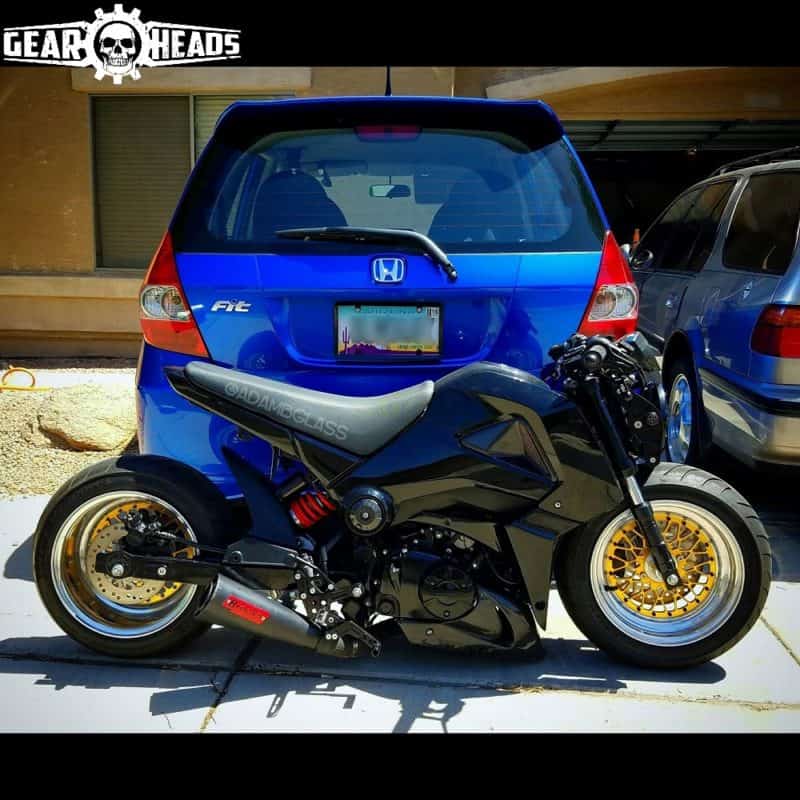 Adam Barrington’s stretched Honda Grom is undeniable proof that you can have a lot of fun on small bikes. The 24 year old’s stable has seen many bikes in his short riding career, but when he’s not riding around on his 2011 CBR1000RR, Adam can be seen banging about on his awesome custom Grom. The Grom is one of those bikes that has a serious cult following and a great custom scene: we’ve seen Panigale engine swaps, streetfighter bodywork kits, but now we’ve got an awesome stretch to keep the Grom crowd pleased. Even better: this is Adam’s first custom project, and it is pretty damn incredible for a first flirt with custom couture. 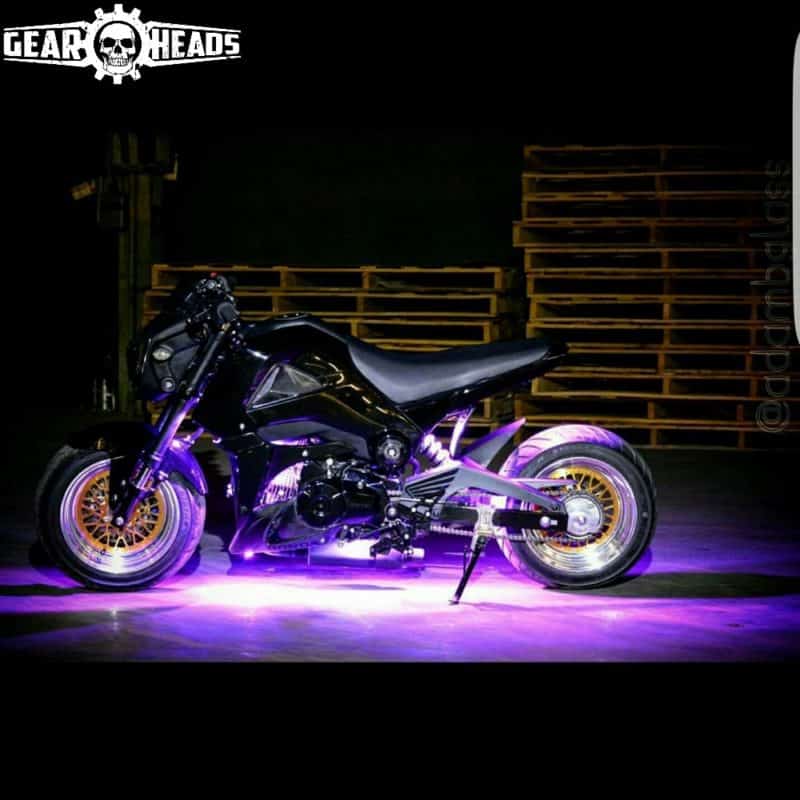 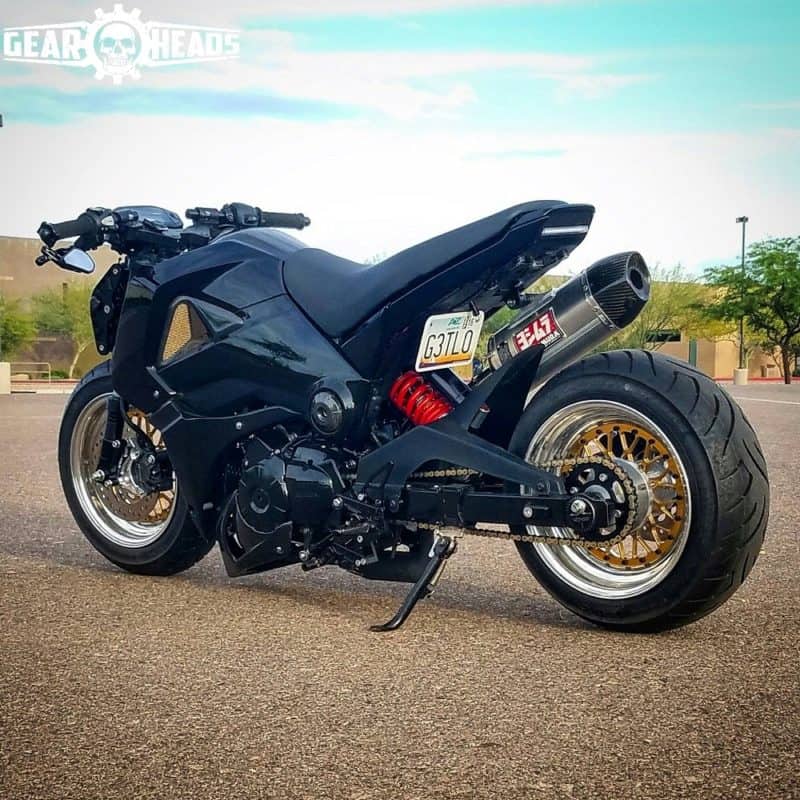 “I got the bike in 2015 and only kept it stock for about a month,” said Adam. To get things started, Adam began by updating the Grom’s air intake, upgrading the exhaust and adding a Power Commander. To give the Grom a sportier edge, Adam added some carbon fiber parts, from Tyga, to the mid-section, and replaced the handlebars with a new set from Composimo. The wheels and hubs were also updated to FLP units. 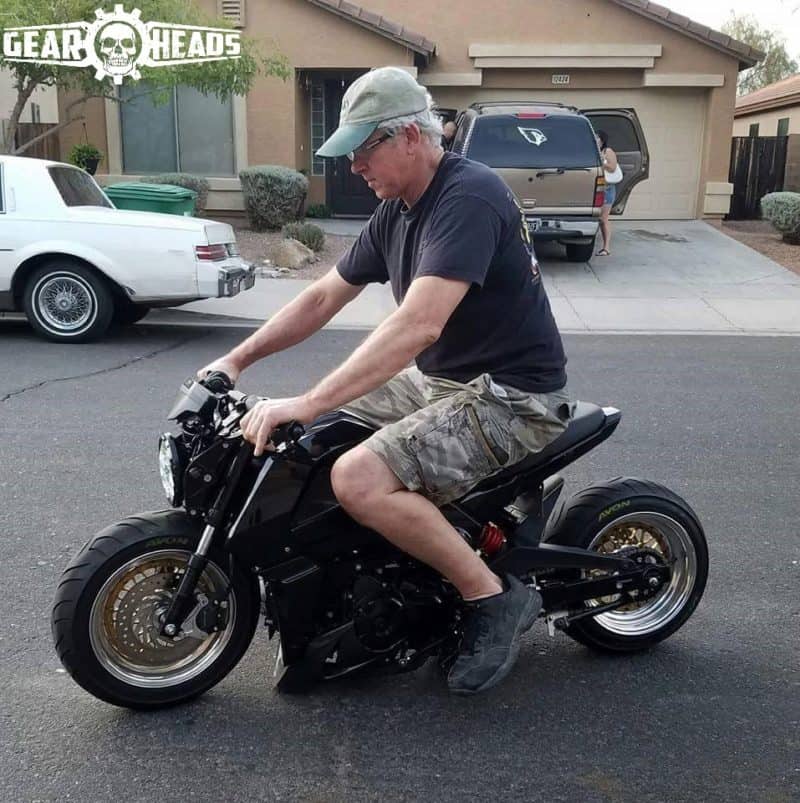 Next, Adam moved onto the stretched swing arm, and lowered the bike a little. By the time the beginning of 2016 rolled around, Adam decided to update the front end with an awesome kit from RRGS, and lowered the rear by a further 6.5 inches. Apart from adding a few awesome LED lights, the bike was done.  “A lot of people don’t believe that the bike is rideable with such little ground clearance, but it is still very fun to ride. In fact, I have put about 3500 miles on it in the last year.” 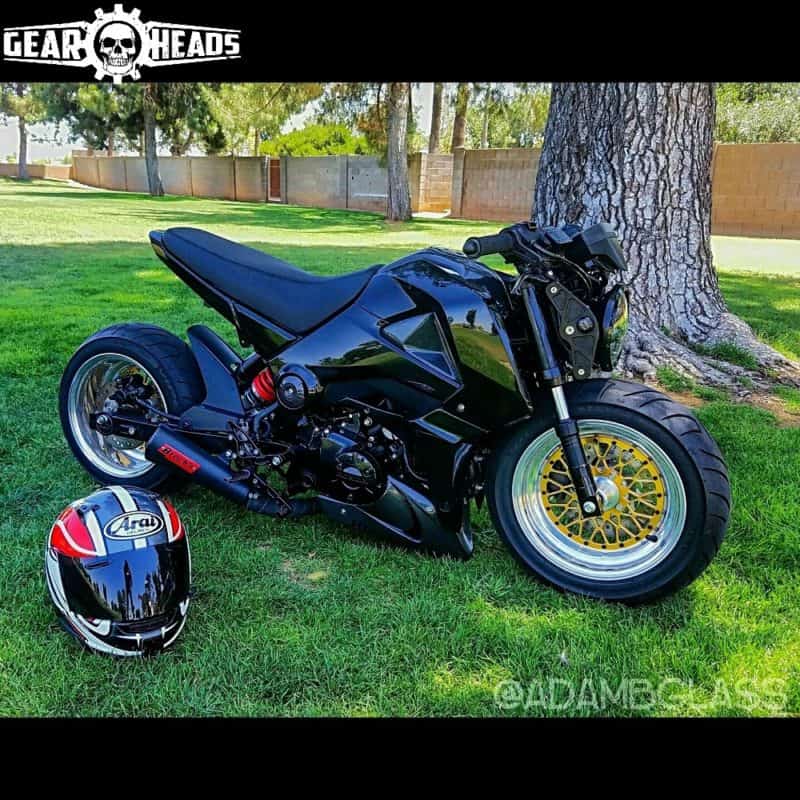 Having taken a few rides on the Grom, I can say that they’re incredibly fun bikes to ride. They might be small, but they’re a good laugh and as nimble as you like. I haven’t had the pleasure of riding a stretched Honda Grom yet, but I reckon it’s a blast to ride. Nice work Adam, and a sensational first build. 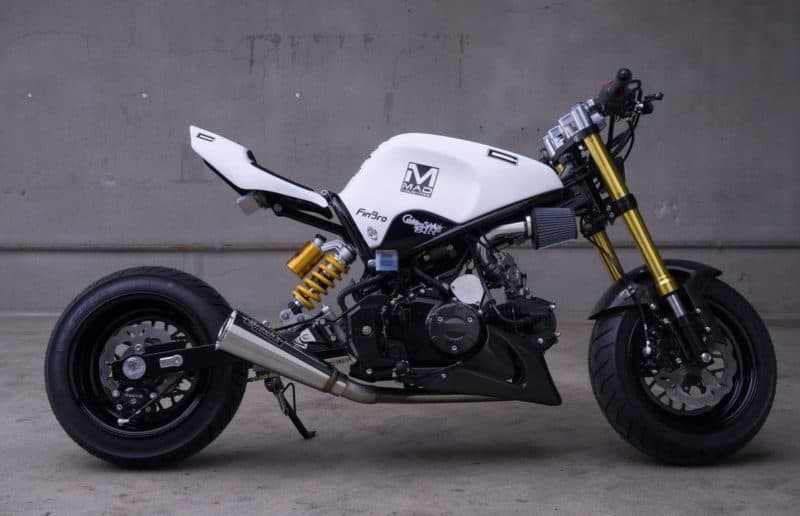 How do you make a Honda Grom look seriously mean? Talk to MAD Industries, and they’ll show you how it’s done. 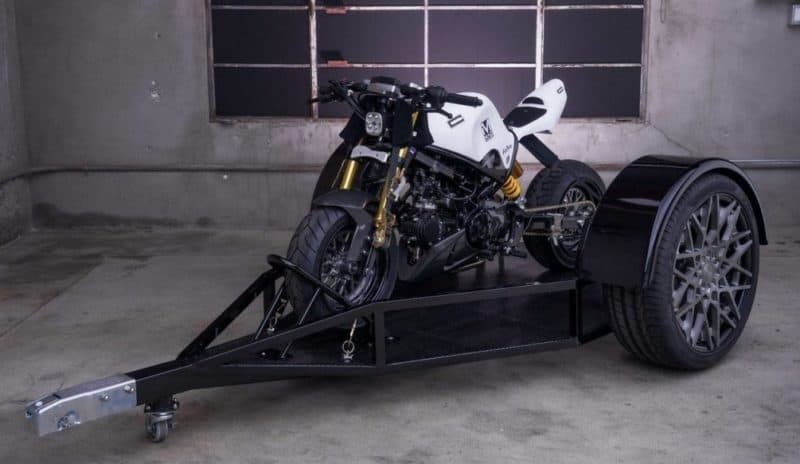 Firstly, when it comes to custom bikes, you have to respect those brave enough to work on smaller capacity machines. Why? Because the vast majority of donors aren’t that great: being under 500cc, you’ve usually got cheaper parts and all that jazz to play with, and more importantly, you’ve got next to zero “iconic” status to lean on or riff of off. Grabbing a classic Kawasaki Z series, or BMW R whatever and making it go isn’t nearly as difficult as working on something small. Now, the Honda Grom certainly isn’t crap – in fact, it’s a near masterpiece – but turning one into a full blown street fighter is only for the best of builders. Enter MAD Industries… 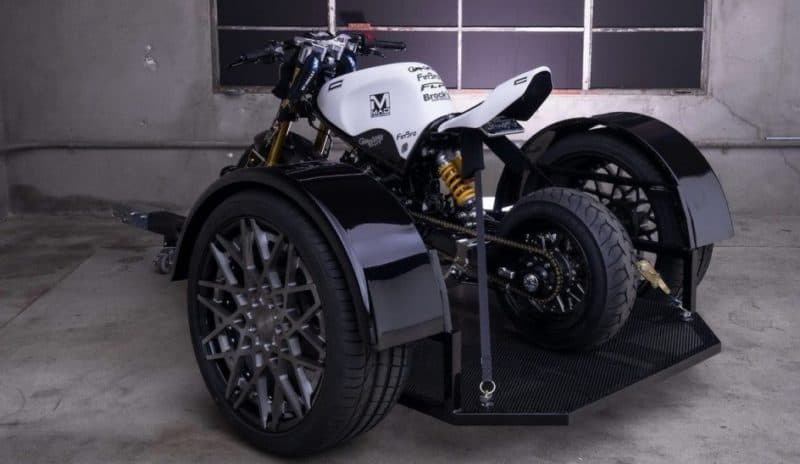 With plenty of experience playing around with MSX125, they knew what they were doing when they built this little devil. Displayed at SEMA, these two 2016 Grom customs will blow your mind. 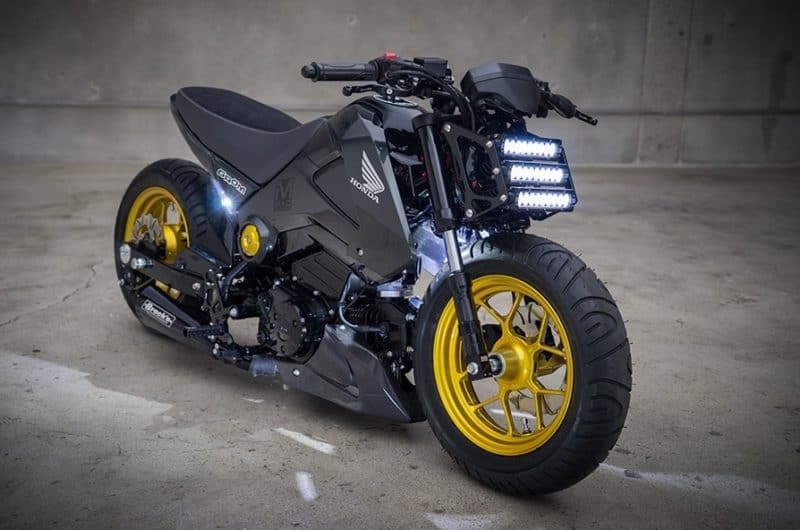 Firstly, MAD began by building a new custom frame from scratch, ditching all of the bodywork panels, and fabricating a new tank. The new frame was complemented with a bespoke sub frame and an upswept solo seat with a racing-esque, superbike styled tail piece. 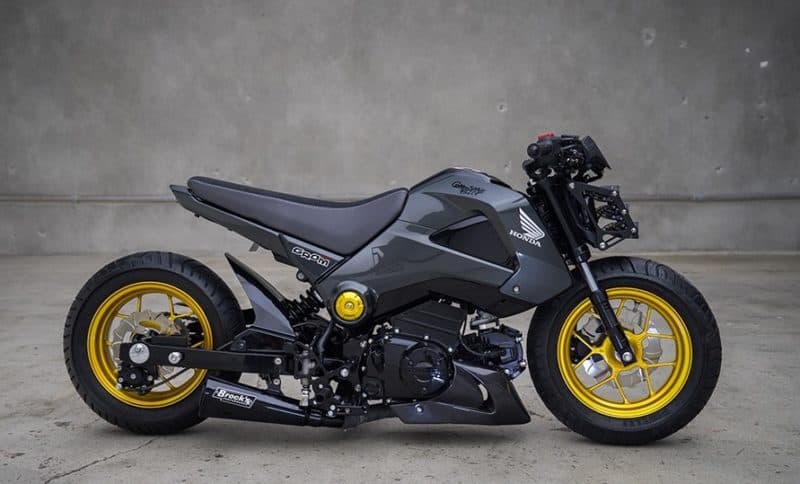 Next, MAD Industries mounted a longer swing arm, for obvious reasons, and equipped it with an Ohlins rear shock, and what looks like matching Ohlins at the front, although it’s hard to see. Either way, it gives the Grom a meatier profile, one that’s definitely inspired by the aggressive street fighters of the moment. 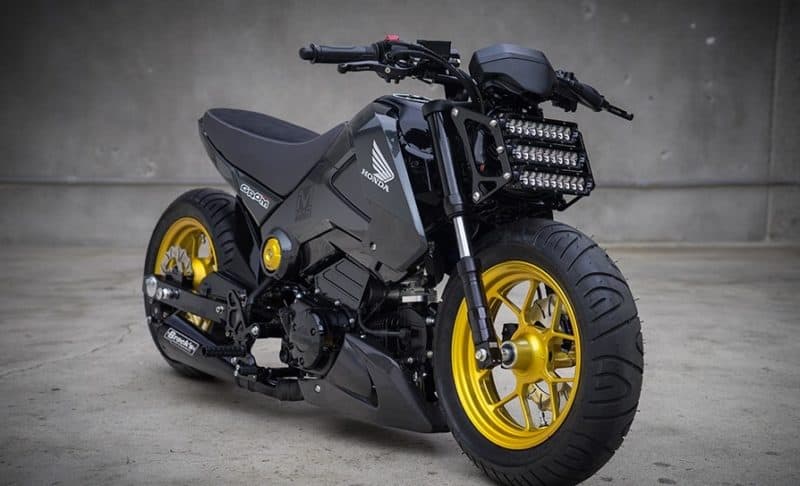 Underneath, the original airbox was scrapped and replaced with a good old conical filter and the final additions were ready to roll, such as the carbon chin spoiler down at the bottom, the Brock’s silencer, which should give the Grom a little more “presence” on the road and a few other styling options. Of the two, the lower beast in the dark finish, with the bold headlights is definitely my favorite. What do you guys think? 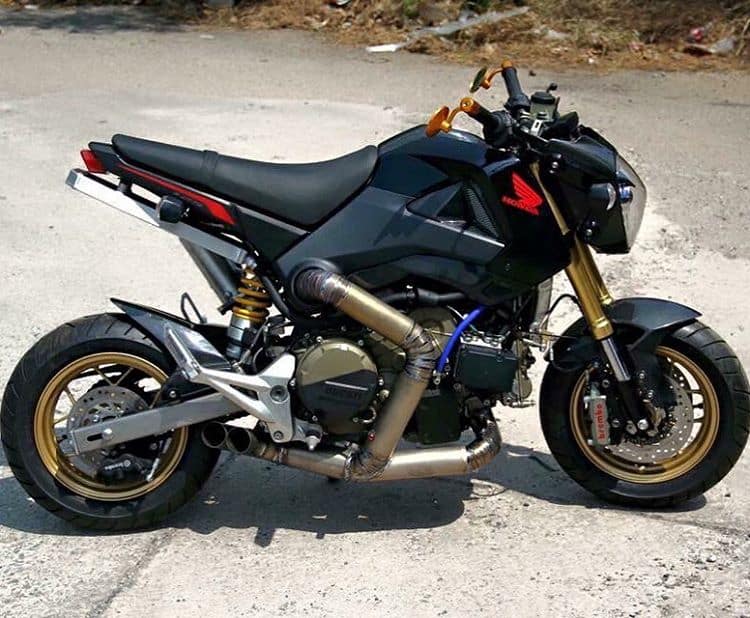 This is what happens when a Honda “Grom” MSX 125 is treated with a Ducati Panigale 1199 R  engine. In stock form, the MSX 125 pushes out a respectable 9 hp… but engineer Mario Kleff, based out of Pattaya, Thailand, had other plans in mind. 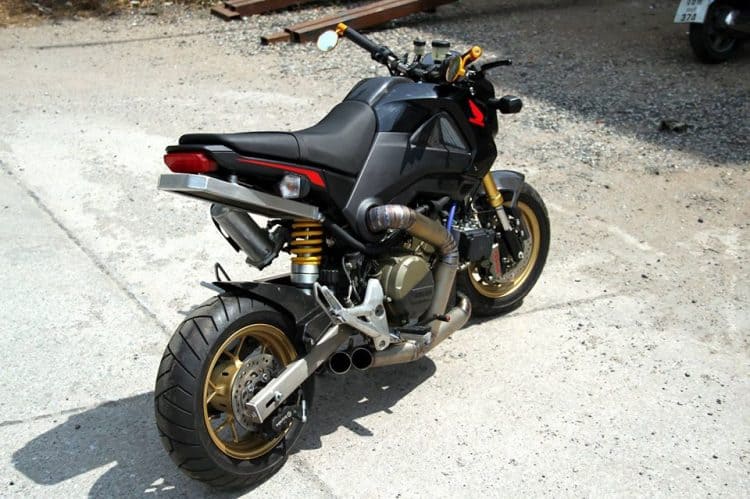 Now, those in the know will be aware that the MSX 125 has a stalwart and cult following in South East Asia, and some of you may have even heard of Mario Kleff before too. He’s responsible for a machine known as the “Thailand Dragon” which sported a rather insane hyper-performance pushrod V2 engine with 222 cubic inches…which ran on alcohol. Now, Kleff has turned his attention to the MSX 125 and given it some serious upgrades. 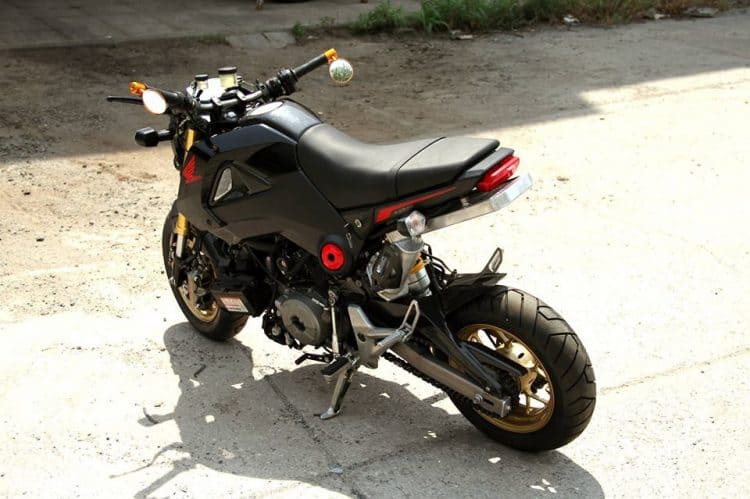 You’d think that very little of the original Honda would be left, after transplanting such a large engine into the machine, but incredibly, very little appears to have changed. The only real noticeable difference is the complex exhaust system, which replicates that of an original Panigale R. We said “appears” because in fact, a lot has happened: the original frame was ditched and re-built out of high grade titanium, the bodywork has been replaced with carbon fiber pieces, and the engine itself has been dolled up to accommodate new titanium elements, such as the headers and exhaust. 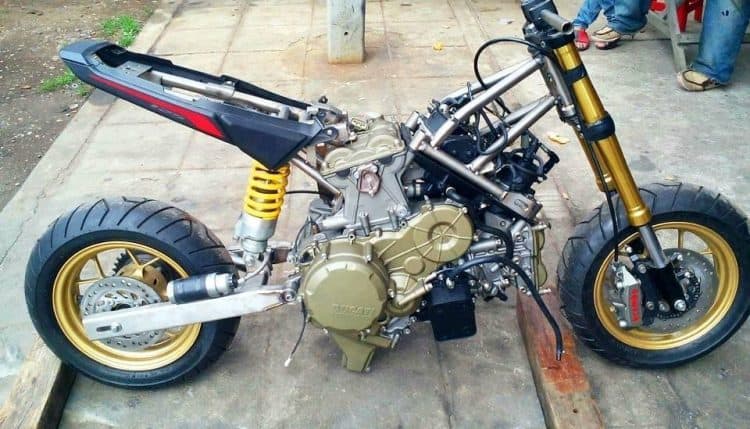 On top of that, Mario has fitted the Grom with high-speed tires, on top of carbon wheels, complete with custom made, ceramic-carbon brake discs. And the MSX now comes with ABS too, which you’ll probably be needing, and some special engine upgrades and more electronic features, although we haven’t been told exactly what they are yet… It also comes with the essential bar end mirrors, just to keep things authentic…

And what remains the same? Well, it comes with the MSX 125’s original USD style forks, the very same seat and the very same spirit. But we can assure you that it’s a very different machine altogether – with 205 hp being boasted, there’s not much else to say, is there? Apart from the fact that it’s the most ambitious Honda Grom engine swap of all time! 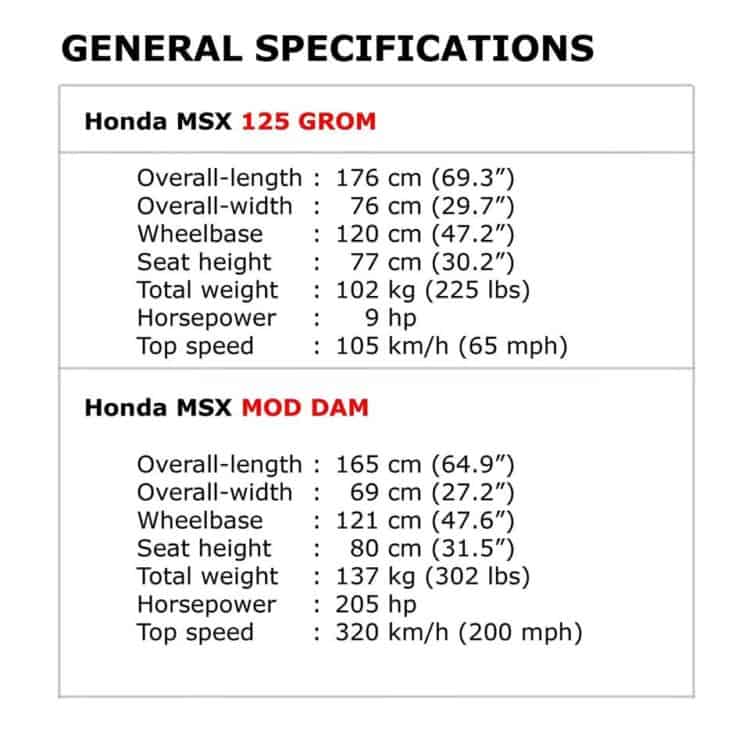