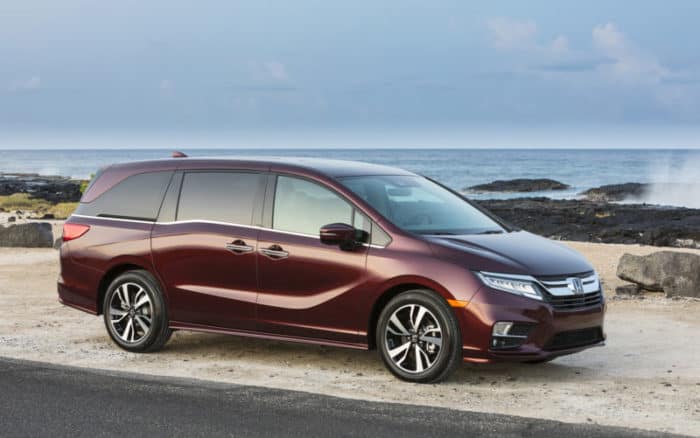 It’s no secret that minivans have become a dying breed among the ever-increasing number of family cars – mainly crossovers. With the disappearance of Nissan Quest and Dodge Grand Caravan in recent years, soccer moms now have only four options available (not counting the all-new Chrysler Voyager which is basically a scaled down Pacifica). What’s more, even the four remaining minivans are struggling to keep their head above water in spite of the fact the competition has never been weaker. The remaining 2021 minivans obviously have their work cut out for them since their glory days of changing the car industry are but a distant memory now.

The minivan segment has shrunk by no less than 35 percent over the last decade and their market share has plummeted to around 2.5 percent of all new vehicle sales in the U.S. with no signs of stopping. For comparison, the minivan constituted more than 7 percent of the entire U.S. vehicle population back in 2000 and 4 percent in 2010.

Without further ado, here’s the remainder of minivans 2021 has to offer, ranked from worst to best (although differences are minimal).

If you’re, by chance, interested in perusing the second-hand minivan market, the following models could be a sound choice.

Having made its debut for MY 2015, the Sedona is slowly but steadily nearing the end of its run – at least in current form. A minor facelift is expected by 2021, and an all new model sometime beyond. Yet, don’t expect any radical changes as the Sedona provides just about enough for most minivan enthusiasts – nothing more and nothing less.

Although it’s already in relatively advancing years, the South Korean minivan is agreeable to the eye and in line with the contemporary Kia design. The potential facelift should bring about a new front and rear fascias, but the overall design language won’t change much. Neither will Sedona’s underpinnings which are shared with the Sorento crossover.

The 2021 Kia Sedona’s interior might be stacked with advanced safety and convenience gear, but it’s cargo space where the Korean minivan fails to impress. Although 34 cubic feet with all seats up isn’t the worst rating in the segment, 78 cubes with the third row folded is, and by far. Furthermore, Sedona’s second row tilts and slides but otherwise cannot be removed hence there’s only 142 cubic feet of space with the maximum effort.

The engine behind the Sedona isn’t the punchiest among the bunch but does a good job overall. A 3.3L V6 paired with an 8-speed automatic gearbox provides 276 horsepower and 248 lb-ft of torque. Although the Sedona has the second least powerful engine in its class (only the Chrysler Pacifica hybrid has less power), its fuel economy ratings of 18/24 mpg aren’t nearly as good enough to compensate.

With prices starting from just over $27,000 prior to mandatory destination fee, the Sedona is actually the most affordable of the remaining minivans 2021 will have to offer. The fully loaded Sedona is another thing, however, as it easily surpasses the $41,000 mark. 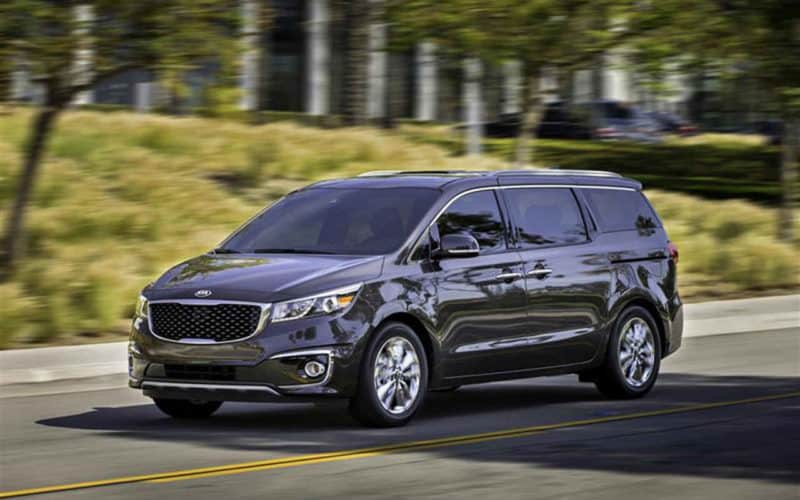 One of four remaining minivans on the market has been around since the late nineties. Currently in its third generation, the Sienna hasn’t been properly redesigned since 2010 despite receiving couple of minor facelifts in 2015 and 2018. The 2021 Toyota Sienna, however, will finally address that issue as the next-gen model has already been announced.

Although seriously outdated compared to its modern competitors, the current-gen Toyota Sienna will continue to serve as the new car’s role model. Of course, a completely revised front and rear end will give the new model much needed pizzazz – as far as minivans go in that regard, at least. Still, the mold will remain relatively unchanged as minivans usually don’t have a lot of leeway for experimentation. The Sienna for MY 2021 will also ride on a new Toyota global architecture which should help with weight reduction while increasing rigidity at the same time.

The next-gen Sienna’s interior will also be completely overhauled, but more importantly brought in line with the contemporary Toyota lineup in terms of technology and comfort. It’s still unclear how the next-gen model’s platform will impact the minivan’s cargo capacities but the current models boast the best in-class figures in that respect. With all seven or eight seats raised, the Sienna offers 39 cubic feet of space. Fold down the third row and you’ll get 87 cubes or 150 cubic feet with both rear seat rows lowered.

The stalwart 3.5L V6 engine carries over into the next-gen models, but still receives some tweaks – much like it was the case in the new Highlander SUV. Paired with an 8-speed automatic transmission, the sturdy V6 delivers 296 horsepower which should be sufficient even for the most demanding of consumers. More importantly, the Sienna is currently the only vehicle in its segment to offer an optional all-wheel drive which drivers in colder states know how to appreciate. There’s also a possibility of a hybrid model further down the line given the fact the TNGA platform easily accommodates electric-assisted engines, but that’s unlikely to happen in 2021.

The all-new Toyota Sienna will arrive in late 2020 as a 2021 model with prices similar to those of the outgoing units. At the moment, Toyota’s minivan costs at least $31,500 which makes it the most expensive of all 2021 minivans out there. 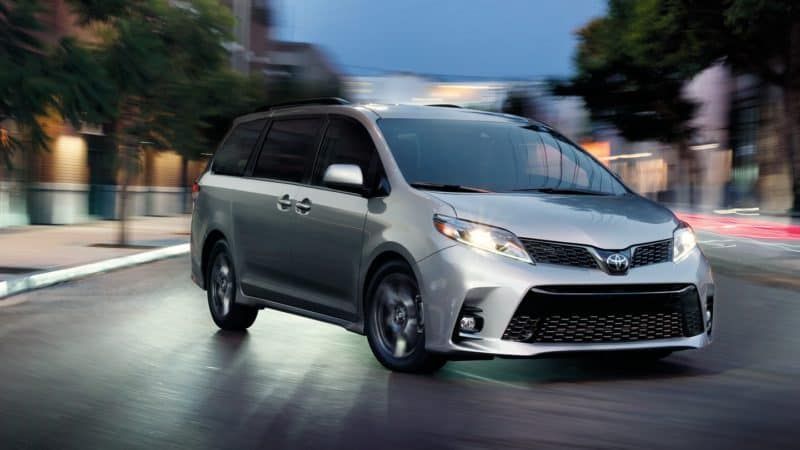 The Odyssey is the most often updated minivan on the market with full redesigns occurring on a consistent basis after five to seven years. The fifth-generation models made their debut for MY 2018, hence no changes are expected to take place in 2021. This isn’t necessarily a bad thing. Especially since 2020-year models already boast a 10-speed automatic transmission as standard.

Design-wise, the Odyssey is unmistakably a Honda. Sharp and slab-sided, the Odyssey might not be the best-looking of all minivans out there, but then again, neither of them will bring home a pageant anytime soon. None of this will change in 2021, except from a possible additional color or two. The Japanese had already offered the special 25th Anniversary Accessory Package for MY 2020 which added unique wheels, badging, and chrome bits for $1,800 extra.

Inside, the Odyssey is almost as spacious as the class-leading Toyota Sienna. Depending on whether all seats are up, the third row is down, or both the second and third row are removed, the Odyssey offers up to 33, 89, or 145 cubic feet of interior cargo space. Honda’s minivan is also well-appointed and overall well-built inside. Apple CarPlay and Android Auto integration are standard almost from the get-go, and so is the Honda Sensing safety bundle.

Underneath the Odyssey’s hood beats a 3.5L V6 mill paired with an already mentioned 10-speed gearbox and capable of producing 280 ponies and 262 pound-feet of torque. Rated at 19 mpg in the city and 28 mpg on the highway, the Odyssey is also among the better vehicles in its segment when it comes to fuel efficiency.

The entry-level Honda Odyssey might be starting from around $30,500, but a fully stacked Elite model will easily set you back by around $50,000. Still, it’s one of the most reliable and capable 2021 minivans out there and that apparently comes at a price. 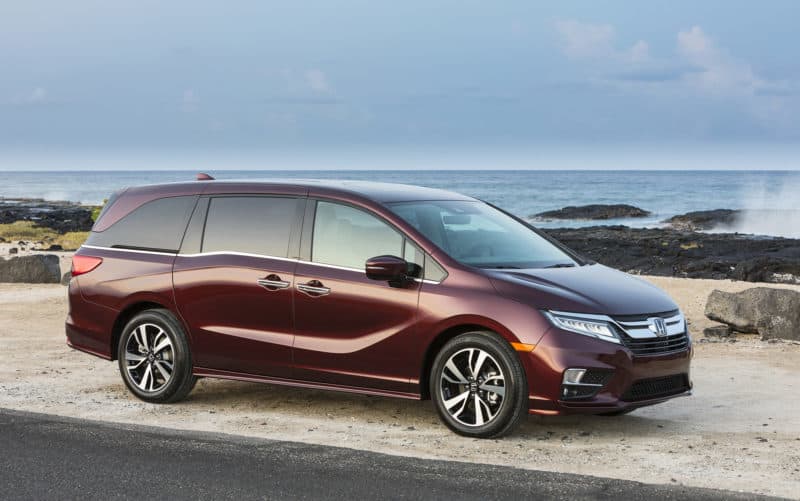 As already mentioned in the intro section, the all-new Voyager is nothing more than a replacement for the lower-grade Pacifica L and LX models, while the Pacifica itself starts from the Touring trim and rounds the lineup off with the expensive Limited grade. And by replacement, I mean nothing more than a new nameplate (although the Voyager name has already been used in decades past).

Being basically the same vehicle, there aren’t that many differences between the Voyager and Pacifica. The lower grade Voyager models come with different, smaller wheels and a revised lower front bumper due to the fact they don’t have the premium fog lamps. Other than that, it’s the same old as far as Pacifica’s design is concerned, and FCA won’t be changing anything in 2021 considering they’ve only just pulled the Voyager nameplate out of retirement.

Inside, both the Pacifica and Voyager offer the same 32, 88, or 141 cubic feet of cargo space depending on how you decide to arrange their seats. Speaking of which, the premium FCA minivan boasts ingenious Stow N’ Go folding seats which fold down completely and leave the floor flat. However, they’re only available in the conventional models as hybrids use that area for their batteries.

The internal-combustion-powered Chrysler Voyager and Pacifica use the same 3.6L V6 engine with 287 horsepower and a 9-speed automatic gearbox. A hybrid Pacifica uses the same engine paired with a CVT gearbox and bolstered by a 16-kWh lithium-ion battery pack. The complete setup develops 260 horsepower but provides up to 33 miles of all-electric range. Also, the Pacifica hybrid is rated at 32 mpg combined, while the conventional models return 18/28 mpg.

The Chrysler Voyager starts from $28,925 for the entry-level L trim, while the Voyager LX costs $31,290. The Pacifica Touring now costs $34,990 while the range-topping Limited models creep up to the $50,000 mark. The same goes for the Pacifica hybrids which start from north of $40,000. Regardless of some of their shortcomings, the Chrysler Voyager and Pacifica are arguably the best minivans 2021 has to offer. 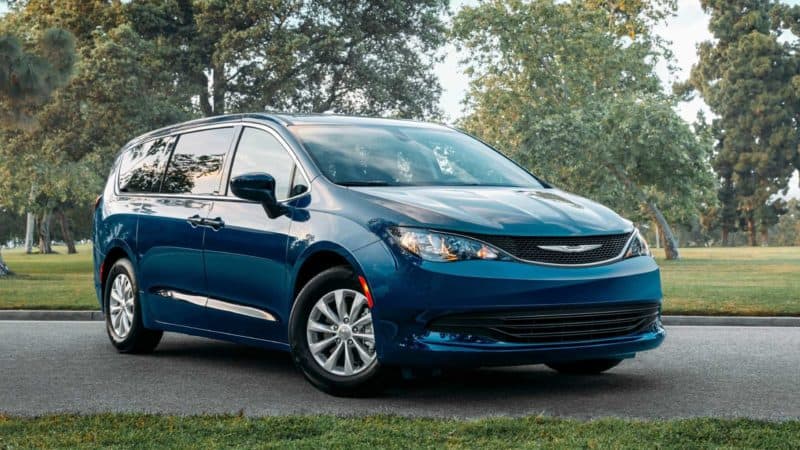