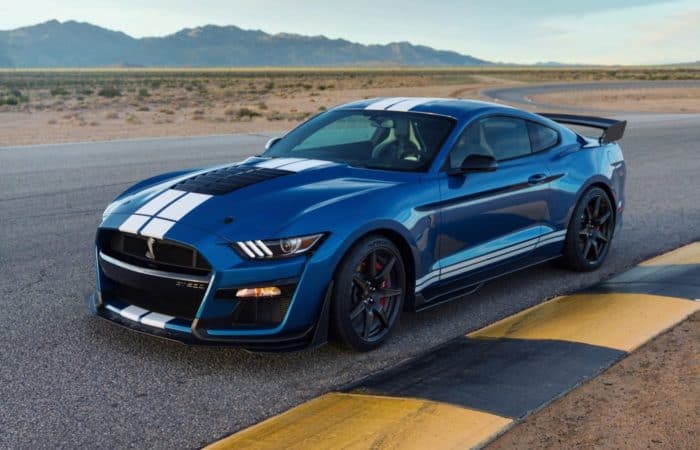 Although muscle car heyday is long behind us, we’ve witnessed a rapid resurgence of once mighty segment in recent decade or two. What’s more, recent years have brought us some of the most powerful muscle cars ever produced and that trend isn’t showing any signs of disappearing. The 2021 muscle cars class will have plenty to offer in that regard and we’re here to shed light on them.

As far as the muscle car segment is concerned, things have started going south in recent years. The muscle car niche is shrinking much like any other passenger car segment as the crossover/SUV onslaught is simply proving to be unstoppable. Most of the four remaining mass-market muscle cars from the big three have seen their sales figures drop in 2018. All besides the Dodge Challenger which has, despite its aging platform, quite remarkably managed to record a slight growth in terms of sales on the U.S. market.

Speaking of sales figures, the 4-door Dodge Charger is leading the pack with 80,226 units delivered in the U.S. throughout 2018. The Ford Mustang follows closely with 75,842 deliveries, while the 2-door Dodge Challenger sits in third spot with 66,716 units sold. Finally, the hapless Chevy Camaro has managed to record only 50,963 sales in 2018.

Translated to losses compared to 2017, percentage-wise, Charger has lost 9.2 percent. Mustang’s sales have dropped by 7.4 percent compared to the full year 2017, while Camaro’s sales had plummeted by a hefty 25 percent. As mentioned above, Challenger has actually recorded a slight growth of 3.4 percent.

If first three quarters of 2019 are any indicator, the Charger is about to make a profit, whereas the Challenger is about to lose more than it’s gained in 2018. The Mustang is also in for a slight loss, while the Camaro continues on the same level as before.

Without further ado, here are the remaining muscle cars 2021 will have to offer, all of which are among the most expensive cars to insure in the U.S.

Although running on underpinnings basically unchanged since 2011, the 4-door muscle sedan is still selling extremely good all things considered. That’s one of the reasons the FCA hasn’t replaced it yet. There’s simply no incentive. Another one is their overall approach on the matter since Charger is far from being their only rapidly aging car with no successor in sight. The way things stand right now, the 2021 Dodge Charger might carry over unchanged for one last time.

If that happens to be the case, don’t expect any substantial changes apart from possibly a special edition model. Even now, the Charger is available in numerous trim levels with four different powertrain choices and two different body kits. The latest addition is the Widebody kit which graces the most potent R/T Scat Pack and Hellcat models, and accommodates 11-inch wide tires while adding 3.3 inches of overall width.

With no substantial changes via a proposed facelift, Charger’s interior is expected to remain exactly the same. It’s safe to say the FCA won’t risk spending any money on muscle sedan’s improvements this late in its life cycle, and will instead wait for the next generation to arrive.

The entry-level Dodge Chargers utilize the proven 3.6L Pentastar V6 mill with either 292 hp or 300 hp with optional performance package. The next step on the ladder is a sturdy 5.7L HEMI V8 which cranks up 370 ponies, while a stronger 6.4L HEMI V8 makes up to 485 horsepower. Finally, the fabled Dodge Charger SRT Hellcat models produce 707 ponies thanks to a 6.2L supercharged HEMI V8. All models are standard with an 8-speed automatic transmission and most of them come in rear-wheel drive config. However, the V6-powered models can be optioned with an all-wheel drive system.

The Charger starts from just under $30,000 in the SXT trim, while the ultimate Hellcat models cost at least $71,000. All Hellcat Chargers come with mandatory Widebody package, so it’s not a bad deal paying north of $70k for them. Especially since the package requires a $6,000 extra in the Scat Pack trim which can be obtained without one. 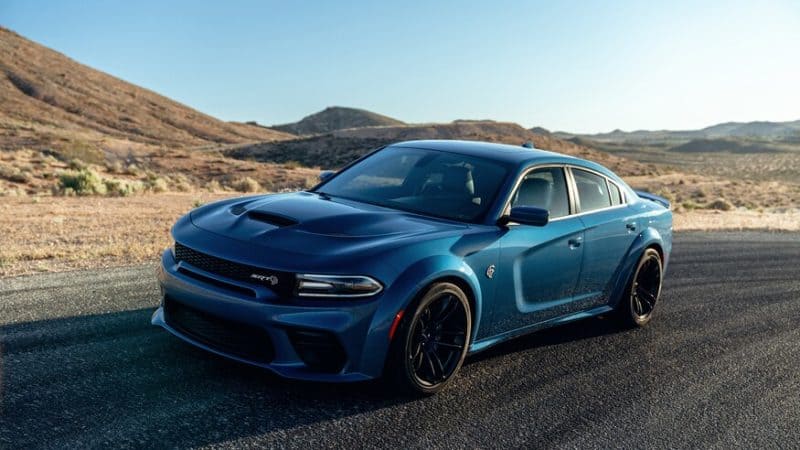 The iconic pony is currently in its sixth generation overall and second generation post-2010 resurrection. Ever since it’s switched to the Alpha platform, the iconic muscle car’s sales have started plummeting. So much so, that it’s been overtaken by the almost 10-year older Dodge Challenger. And by quite a margin at that. Sadly, it seems that Chevy is content on letting Camaro die on the vine as nothing official has yet been announced in terms of potential overhauls.

With no plans to update the muscle car in near future, expect the 2021 Chevrolet Camaro to carry over virtually unchanged. Some new exterior color arrangements are the only thing we can expect to see as far as updates for MY 2021 are concerned. After all, the muscle car has only recently received a new frontal fascia after a polarizing facelift butchered it during MY 2019. Luckily, neither one of its competitors hasn’t got any plans to take advantage of that situation, hence the Camaro might just survive with minimal sales losses.

There are no plans to update the pony car’s interior either, so the most we can expect is some equipment shuffle across Camaro’s trim levels. That, and possibly some new color arrangements and different accents.

The Camaro might not offer as many different V8 configurations as its Dodge counterpart, but it does offer a 4-cylinder as its base engine. A 2.0L turbocharged 4-cylinder in question makes a healthy 275 horsepower and 295 lb-ft of torque while recording respectable fuel economy scores at the same time. The mid-range 3.6L V6 generates 335 ponies, while the range-topping 6.2L V8 cranks up 455 horses and a corresponding amount of torque. Opt for the ultimate ZL1 model which utilizes a large blower and watch the V8’s output curve soar to 650 ponies. Every single Camaro is available with both a standard 6-speed stick or an optional 8-speed auto, and all are rear-wheel driven.

The base models might start from under $26,000, but the ultimate ZL1 package requires at least $63,000 prior to extras. What’s more, a convertible will set you back another $6,000 regardless of a chosen trim level. 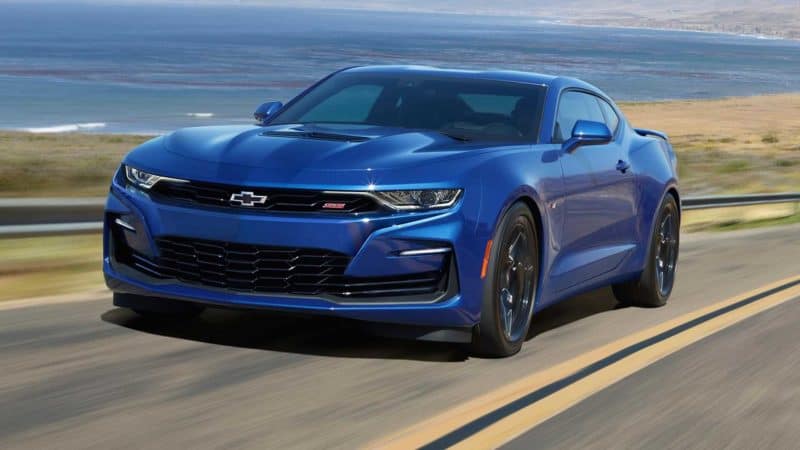 Much like the 4-door Charger, the 2-door Challenger too stems from the past decade. Introduced way back in 2008, the pony car is now unmistakably a senior in its class. Yet, as stated in the intro section, that still hasn’t had a detrimental effect on its sales which are alive and well. This gave the FCA a much needed time-out to regroup and rethink upon the next-gen model’s strategy. That’s one of the reasons we won’t be seeing it next year.

The 2021 Dodge Challenger will instead be carried over without any significant changes for model year 2021 as the radically different next-gen models are expected to arrive in 2022. Some new exterior color schemes and possibly even a special edition model to commemorate the current model’s discontinuation aren’t excluded.

The pony car’s interior will be carried over as well. Although it’s relatively bare-boned in terms of safety gear in the entry-level trim, Challenger offers every single one of them as an option even in base form. That way, you can outfit your base SXT model with adaptive cruise control, forward collision warning, blind-spot monitors, and other features. This considerably raises the initial sticker though.

The base SXT and GT Challengers use a 3.6L V6 engine with 305 horsepower, and either standard rear or optional all-wheel drive. The remainder of the pack can only be configured in rear-wheel drive and utilizes three different V8 mills. The first of them is a 5.7L HEMI with 375 horsepower. Another one is a 6.4L HEMI which generates 485 ponies. Finally, the SRT Hellcat 6.2L supercharged HEMI V8 makes 717 ponies in its initial form or as much as 797 horsepower in the Hellcat Redeye guise. All models are standard with a manual and come with an optional 8-speed auto.

Prices start from around $28,000 and that’s unlikely to change. At the same time, the new Dodge Challenger SRT Hellcat Redeye from the other end of the spectrum costs $72,000 prior to extras, gas guzzler tax, and destination charge. There’s also the optional Widebody package which requires additional $6,000. 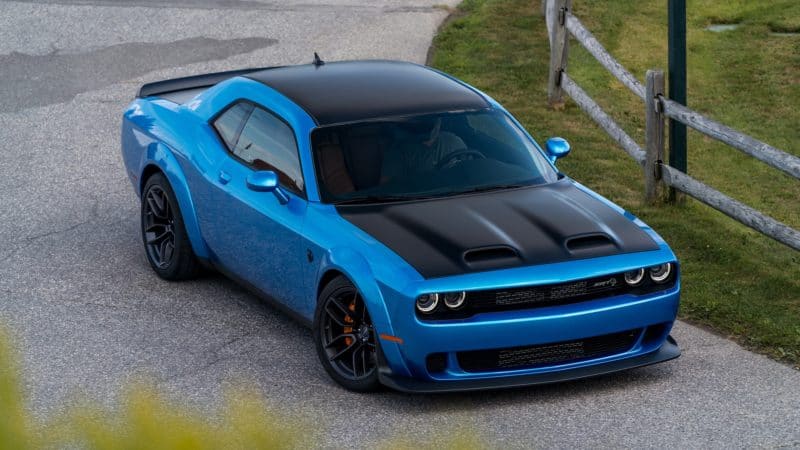 The most popular pony car synonymous with the segment itself is experiencing sales issues much like any other passenger car out there. However, it’s still the best-selling pony car on the market by a long shot and that’s unlikely to change anytime soon. Another thing that’s unlikely to change is this generation’s design language so expect the 2021 Ford Mustang to carry over the way it is.

Although no particular changes are expected to take place on the outside, the Mustang might receive some new accessories like different wheels and/or new paint schemes. After the recent refresh in 2018, the sixth-gen Mustang is set for another few care-free years in that regard, and the return of the iconic Mustang Shelby GT500 only makes things easier for FoMoCo.

Interior has also been overhauled and numerous features previously reserved for higher trims have found their way to lower levels. Also, a heated steering wheel is now available together with heated and ventilated seats. These features are still reserved for higher grades with leather upholstery, however.

The current Mustang’s powertrain lineup consists of four different powertrains. At the lower end of the spectrum sits a perfectly balanced 2.3L turbocharged 4-cylinder mill capable of putting up 310 hp and 350 lb-ft of torque. The Mustang GT benefits from a 5.0L V8 naturally aspirated mill which develops 460 hp and 420 lb-ft of twist. Both units are offered with a standard 6-speed manual or an optional 10-speed auto.

The Shelby part of the Mustang lineup starts with the old GT350 and GT350R acquaintances. Both are offered exclusively with a 6-speed stick and 5.2L V8 with a flat-plane crank combo. They generate 526 hp and 429 lb-ft of torque. Finally, the Super Snake Mustang uses a supercharged version of the 5.2L V8 mill, only with a cross-plane crank. It’s capable of putting up 760 horsepower which, although commendable, is still short of the SRT Hellcat Redeye package. However, we won’t hold this against the most powerful factory Mustang with one of the best Mustang engines ever built. 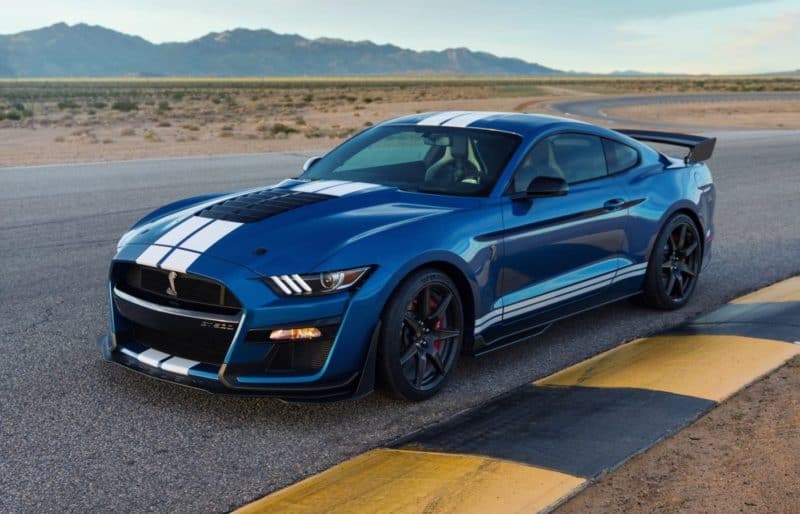 
7 Things Every Gearhead Should Know about Superchargers
Which Muscle Car is Built Best: Camaro, Challenger, or Musta...
New Hennessey HPE800 Cadillac Escalade Packs 842 HP (Video)
10 Vehicles That Go From 0 - 60 In Under 2 Seconds
Seven 2021 Sedans With the Heart of a Sports Car
10 Reasons Why Your Car Won’t Start