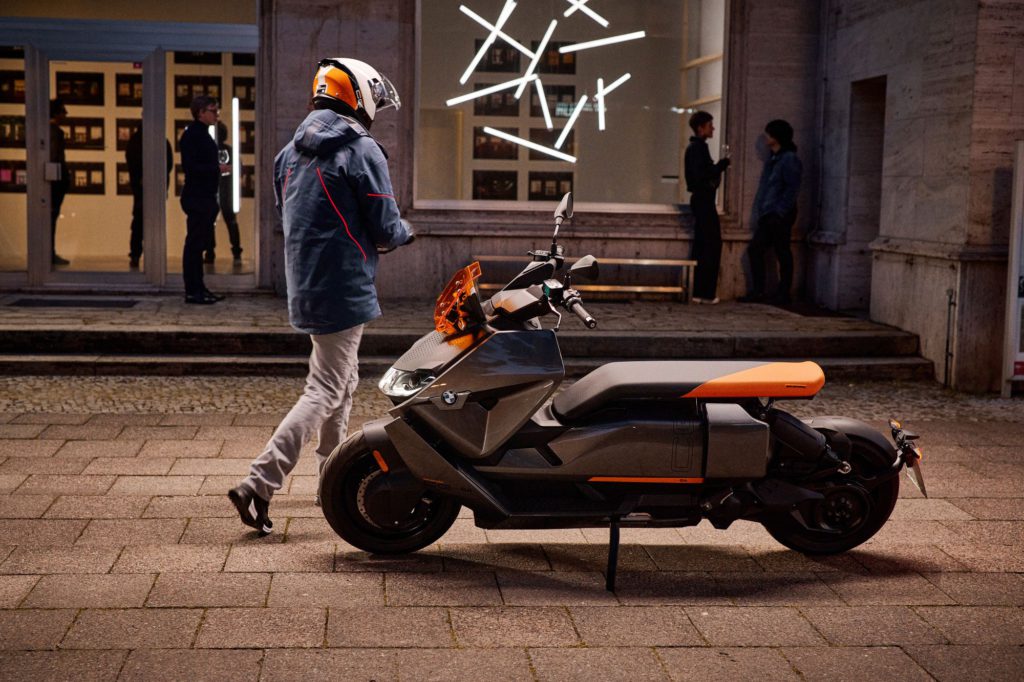 The CE 04 scooter, which will hit showroom floors in 2022, was announced today. BMW shows off a lot of attention to detail in the scooter’s build — even though it’s still early, there’s a lot to know. We sorted through it to bring you the highlights.

The first of the CE 04’s stats that really hit us was its top speed. A 75-mph ceiling keeps it well clear of relegation to grocery-getter status. Drive power comes from a permanent magnet EMP 156 electric motor. Its maximum output is 42 hp at 4,900 rpm and 44 lb.-ft. of torque at 1,500 rpm. According to BMW, it’s capable of supporting two people on longer trips. As specified above, the max range checks in around 80 miles.

BMW’s in-house motorcycle department, Motorrad, collaborated with its car department to optimize the CE 04’s performance. The collab imbued the scooter with a variety of cross-over technologies, such as battery manufacturing and voltage control elements for the motor.

The CE 04 E-scooters performance tech doesn’t end at the motor.

An energy recuperation system helps recover energy whenever possible, extending the scooter’s range and improving its efficiency. Front and rear disc brakes and a 2-channel ABS from Bosch deliver braking security, and a banking sensor in the ABS optimizes cornering safety. The CE 04 borrows a traction control system from BMW’s combustion motorcycles, including a facsimile of its Automatic Stability Control, which limits rear-wheel slip.

An automotive-based charging system reduces recharge times. The supplied cable (2.3 kW) takes the battery from 0 to 100 percent in 4 hours and 20 minutes. Goose it with the optional Level 2 charging cable (6.9 kW), and the charging time drops to 1 hour and 40 minutes. And with either cable, charging from 20% to 80% takes 45 minutes.

Drivers can program the screen to display a bevy of information. Navigation is available through the BMW Motorrad Connected app. Energy information such as charge percentage and recuperation status can be displayed. And the standard handlebar multi-controller cycles between navigation, media, phone, setting screens, and more.

Motorrad Connected updates automatically to bring the user the newest maps and latest features. App users can also save routes and view travel information and statistics.

The screen mirrors the user’s phone via a LAN link, so BMW builds in an actively ventilated compartment with charging ports for phone storage while riding.

BMW goes above and beyond for the CE 04 E-scooters technology and driver experience, but it also strongly emphasizes its atypical styling. With this, too, it seems, the manufacturer sets a lofty goal.

Edgar Heinrich, Head of Design at BMW Motorrad, puts it this way: “The new BMW CE 04 is the link between the user’s analog and digital worlds. It is both a means of transport and a means of communication for the big city commuter. With its forward-looking design based on an innovative package, it sets out to redefine the scooter segment.”

Modern, uncluttered silhouette? New freedom? As if we needed any more high-brow seducing.

Per today’s announcement, all we can confirm is that the CE 04 E-scooter will be part of BMW’s 2022 lineup. As yet, an exact release date is unconfirmed.

The way — or at least the scooter — of the future is here. Hop on and learn more at BMWMotorcycles.com.