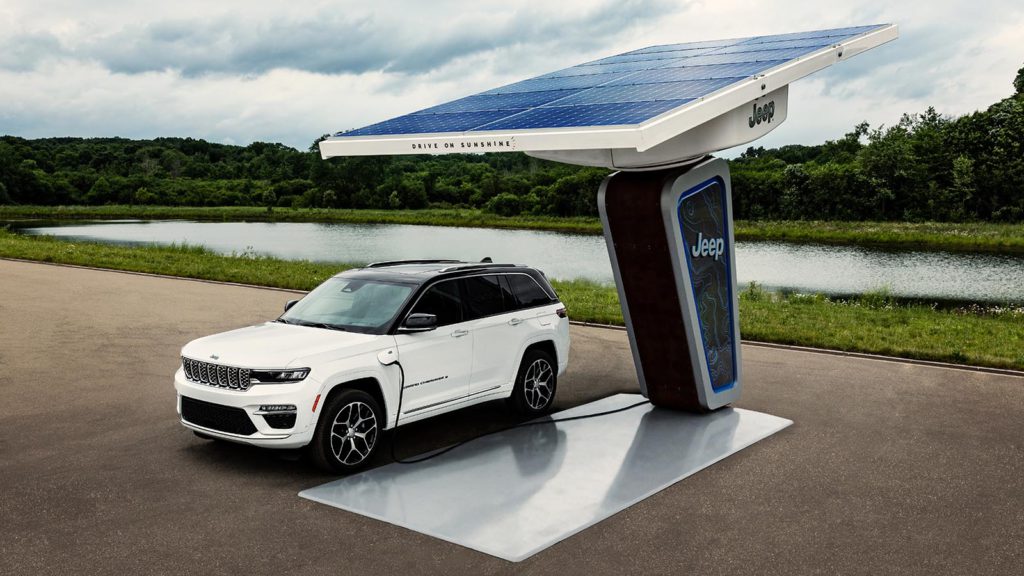 Best known for high-performance products like the Challenger SRT Hellcat, Dodge is readying an all-electric muscle car that will be its fastest and most powerful ever, brand CEO Tim Kuniskis revealed on Thursday.

And that’s just one of the 55 electrified vehicles that Stellantis — the industry giant formed by this year’s merger of Fiat Chrysler and the PSA Group — plans to bring to market by 2025. During a nearly three-hour session on Thursday morning, company officials shared extensive details about their plans to shift from gas and diesel to battery power. All 14 Stellantis brands will be impacted, with the company working up plug-in and all-electric minicars, muscle cars, SUVs, pickups, and light commercial vehicles. 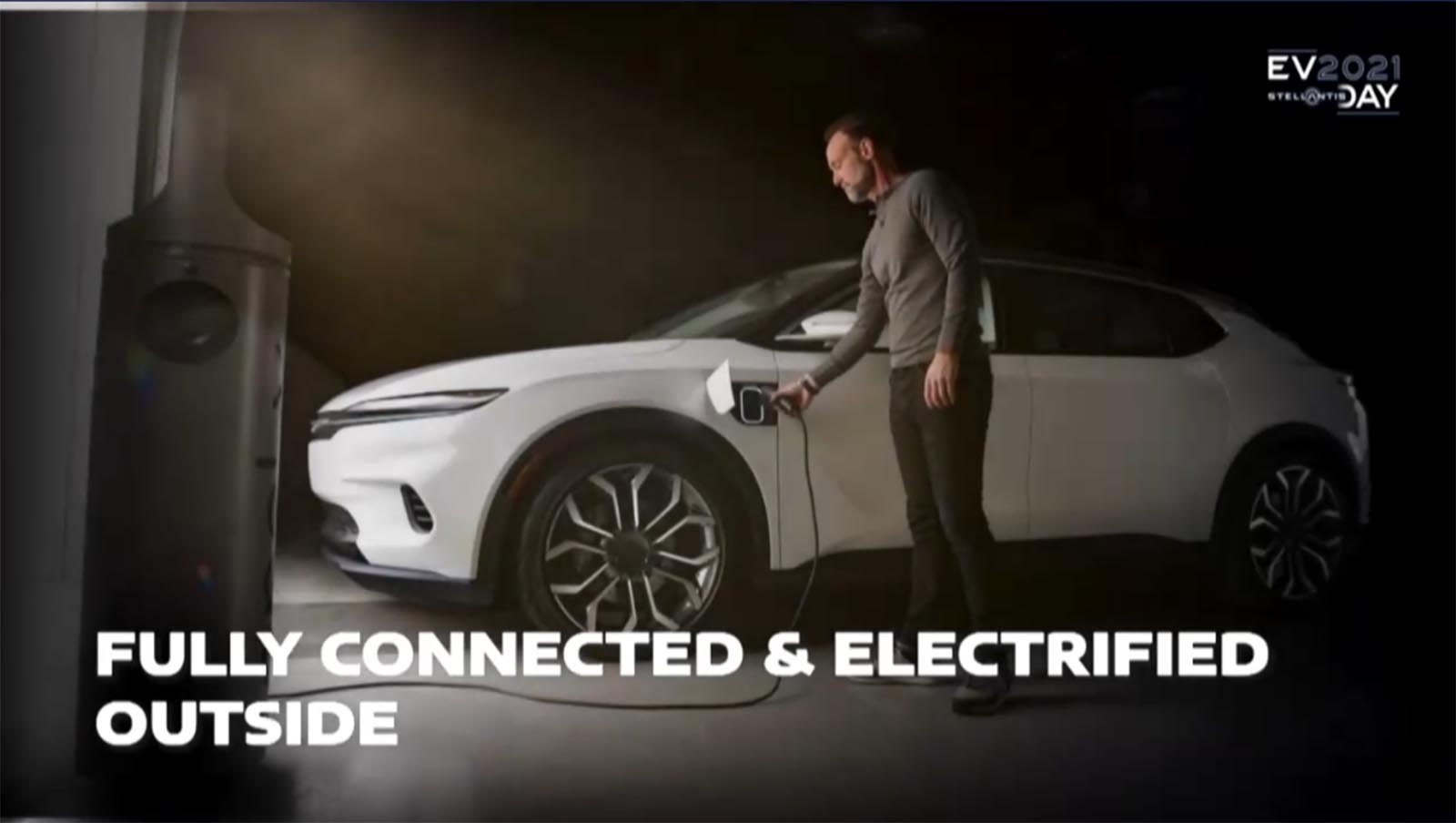 “Stellantis is now in full execution mode at full speed on its electrification journey,” said Stellantis CEO Carlos Tavares, as he opened up the “Battery Day” event.

In all, Stellantis intends to invest about $35 billion, over the next five years — and this comes on top of the money already spent on EV development. The program will touch every aspect of the company’s business. Existing parts and assembly plants will have to be extensively updated. Five new battery plants will be set up by 2030 in Europe and North America, and the company plans to help expand existing charging networks in numerous markets.

But the heart of the project will be, of course, the products Stellantis plans to bring to market. During the online event, the automaker offered a glimpse of some of the more significant battery-powered cars and trucks under development.

The upcoming Dodge model was seen only under wraps, but Kuniskis offered a few hints of what to expect. It will be faster than any product the muscle car marque has ever before offered, launching from 0 to 62 mph in about 2 seconds which would put it on a par with the new Tesla Model S Plaid. And it would blow away the previous track star, the Dodge Challenger Hellcat Demon.

The reality, said Kuniskis, is that “our engineers are reaching the practical limit of what we can squeeze from an internal combustion engine. We know that electric motors can give us more.”

Two other Detroit brands were highlighted during the event. 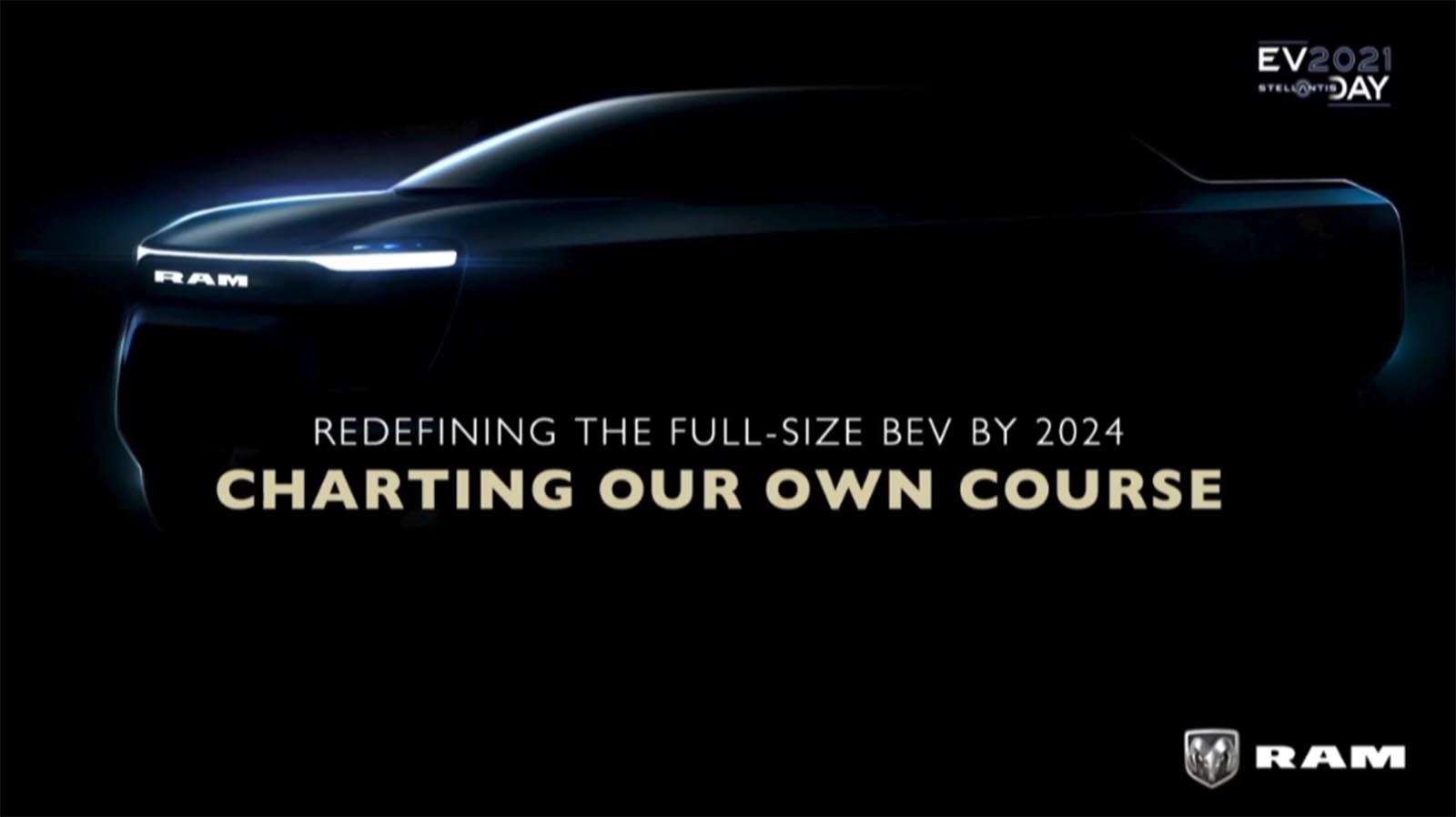 The Ram brand will get an all-electric version of the familiar 1500 full-size pickup by 2024, confirmed brand boss Mike Koval. That will bring the division into the fast-growing EV pickup segment later than key competitors Ford, Chevrolet, and GMC, as well as upstarts like Rivian and Tesla. But Koval defended the late arrival by declaring Ram’s entry will be “the right product at the right time.”

As for Jeep, the automaker has already scored big with its first plug-based model, the Wrangler 4xe, now the best-selling PHEV in the U.S. market. And the plan is to have 4xe versions of every product in the Jeep line-up by 2025, with a version of the Grand Cherokee on tap for the 2022 model year.

While there was no specific mention of the Chrysler brand, Ralph Gilles, head of Stellantis design for North America, was pointedly shown alongside an SUV-like concept vehicle bearing the familiar, winged Chrysler badge. That appeared to be a very intentional move to head off growing concerns that the once iconic brand might be phased out in the years ahead.

That appears to be the reason that Fiat, another troubled brand, was highlighted during the lengthy EV seminar. The Italian automaker will effectively go all-electric in the years ahead. Most of its plans target Europe, but some battery models will come to the U.S. And Fiat also will enter the Chinese market with pure BEVs.

There will be still more EVs for the Stellantis light commercial vehicle operations, starting with its delivery van. But details about other marques, such as Alfa Romeo and Maserati, won’t be revealed until later. 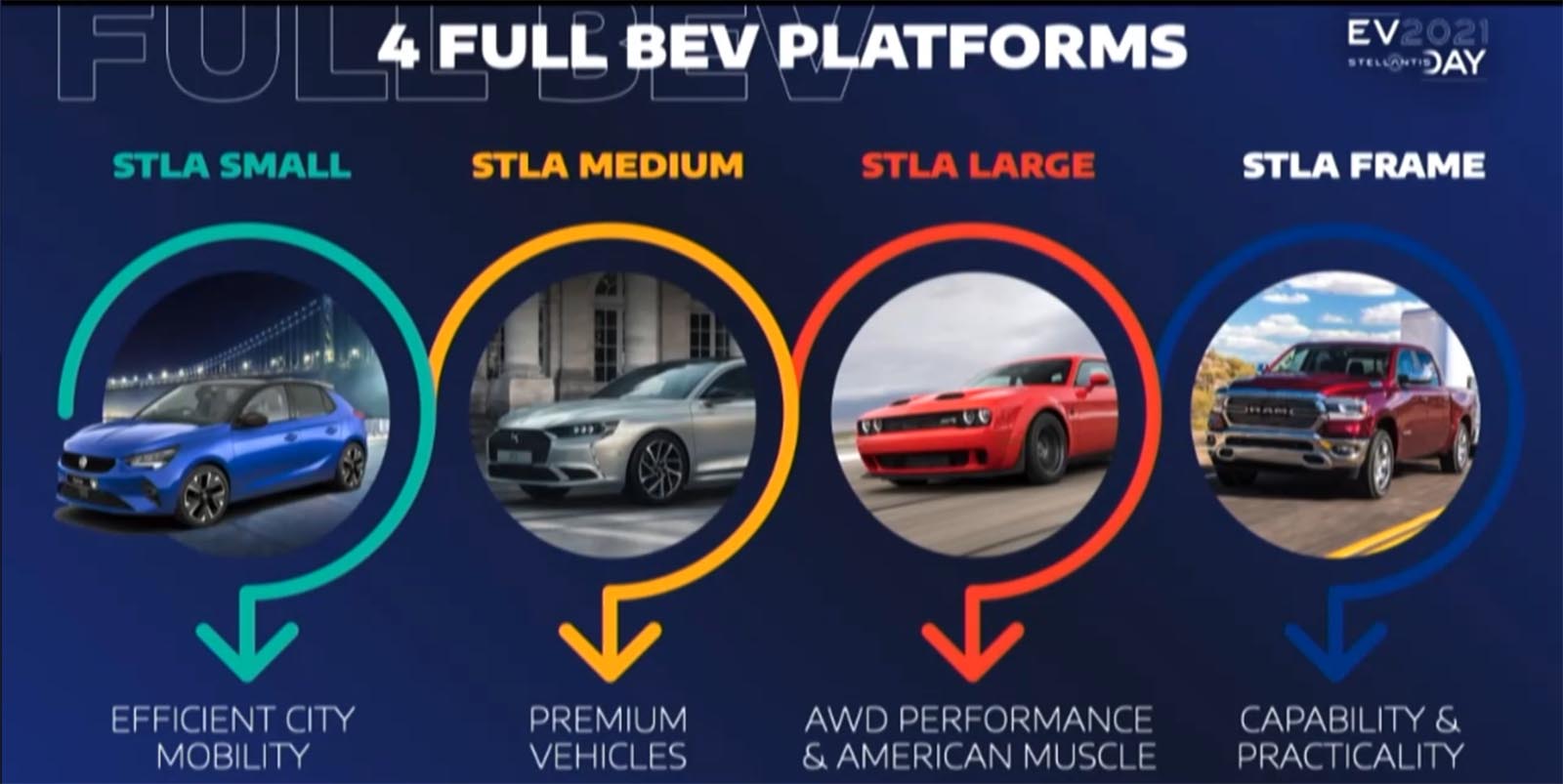 All told, the initial target is 55 plug-based models — 15 hybrids and the rest pure battery-electric. They will be based on four new architectures, one each for small, medium, and large passenger cars and SUVs, with a fourth using a body-on-frame structure for use with pickups and commercial vehicles.

Stellantis is also developing two new lithium-ion battery chemistries, including one that eliminates cobalt, a costly metal that creates environmental issues in its mining and production. Battery packs will be able to hold anywhere from 37 to more than 200 kilowatt-hours of energy. The range will run up to 300 miles for the STL Small architecture and up to 500 miles per charge with the STLA Large and STLA Frame platforms. Charging times are also expected to drop to as little as 10 minutes for an extra 200 miles range.

By 2026 the automaker hopes to begin shifting to an entirely new type of battery – solid-state technology which is expected to result in substantial reductions in cost while boosting range, cutting charging times, and reducing the risk of battery fires. 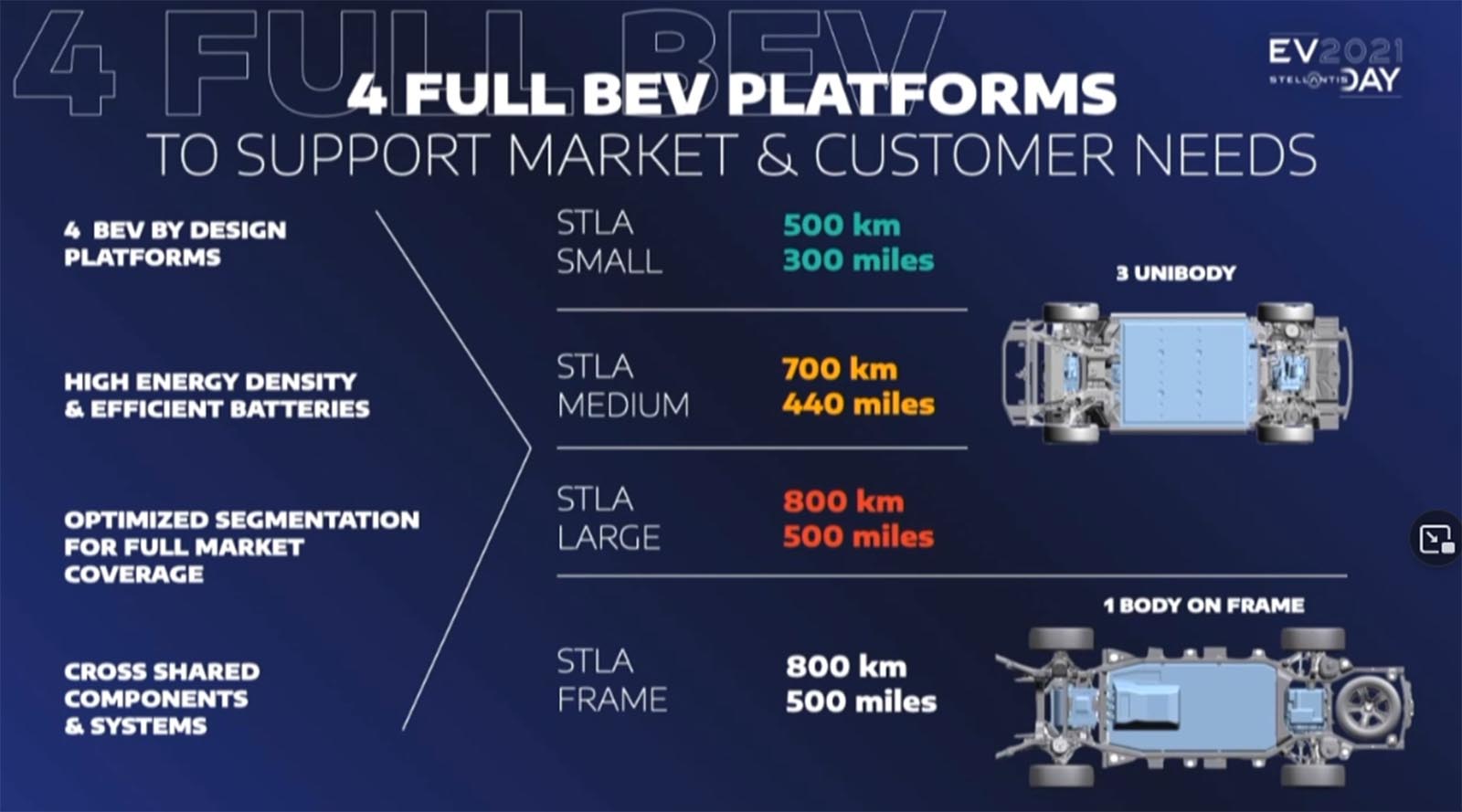 Battery technology will prove critical in numerous ways, said chief financial officer Richard Palmer, not only delivering competitive range, power, and charging, but also bringing down the cost of electric vehicles. He acknowledged that Stellantis depends on governmental incentives currently to help it break even on the sale of its EVs. But the goal is to slash the cost of electric technology by more than a third, making it possible for Stellantis to achieve “double-digit” profit margins by the latter part of the decade.

The latest plan marks a dramatic shift from where things stood at the former Fiat Chrysler Automobiles until recently. When the company launched its first BEV, the Fiat 500e, the late CEO Sergio Marchionne said, only half in jest, that he hoped no one would buy the car because the company lost about $14,000 on each one.

Now, with consumers beginning to embrace battery technology and regulators around the world beginning to enact strict new zero-emissions standards, Stellantis wants to lead the market and turn a solid profit in the process. This year, the company estimates, plug-based products will account for 14% of its sales in Europe and 4% in the United States. By 2030, however, Tavares estimated that will jump to more than 70% in Europe and over 40% in the U.S.


Hoonigan "This vs. Plaid": Will Gas or Electricity Rule the ...
2022 Ford F-150 Lightning: Ford's Electric Pickup Revealed
Best of 2019 Chevrolet
The Chevy Avalanche Has Been Reincarnated as the Silverado H...
Wood is Good: Toyota Car Bumpers Could Be Made From Trees
2021 Silverado Gets "New" Chevrolet Multi-Flex Tailgate