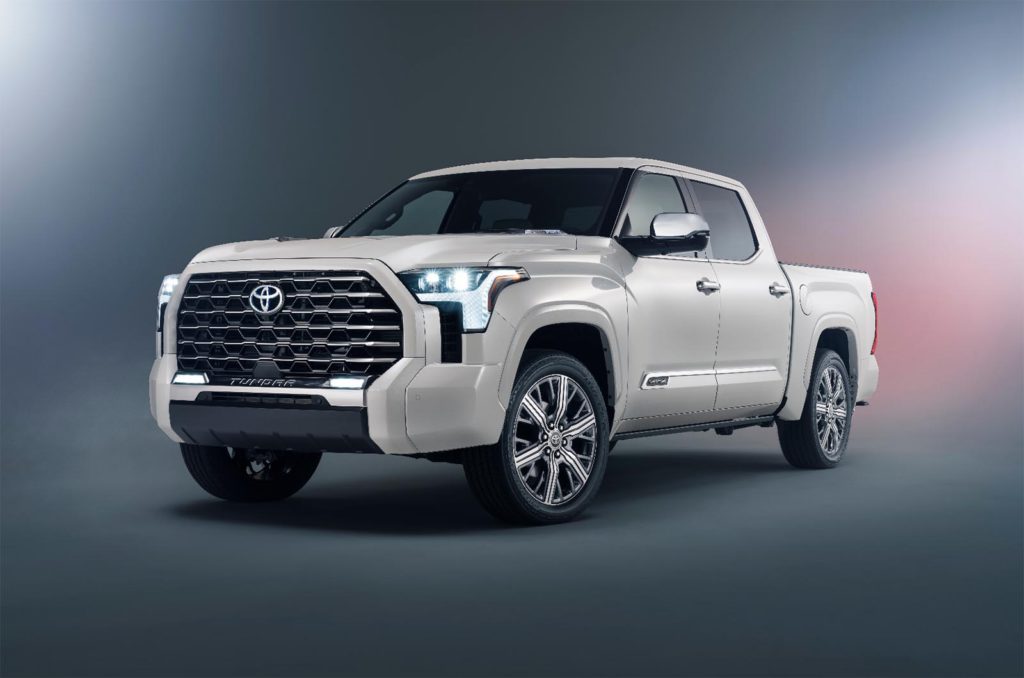 Who says you need a BMW “spinner” logo to surround yourself in luxury. These days, more and more buyers seeking an upscale set of wheels are opting for well-equipped pickups – and Toyota wants to take better advantage of that trend.

The Japanese giant is elevating its all-new 2022 Tundra line with the addition of the new Capstone model. Adding a step up from the 1794 Edition that currently tops the line-up, the 2022 Toyota Tundra Capstone will target competitors like the Ford F-150 Limited and GMC Sierra Denali. 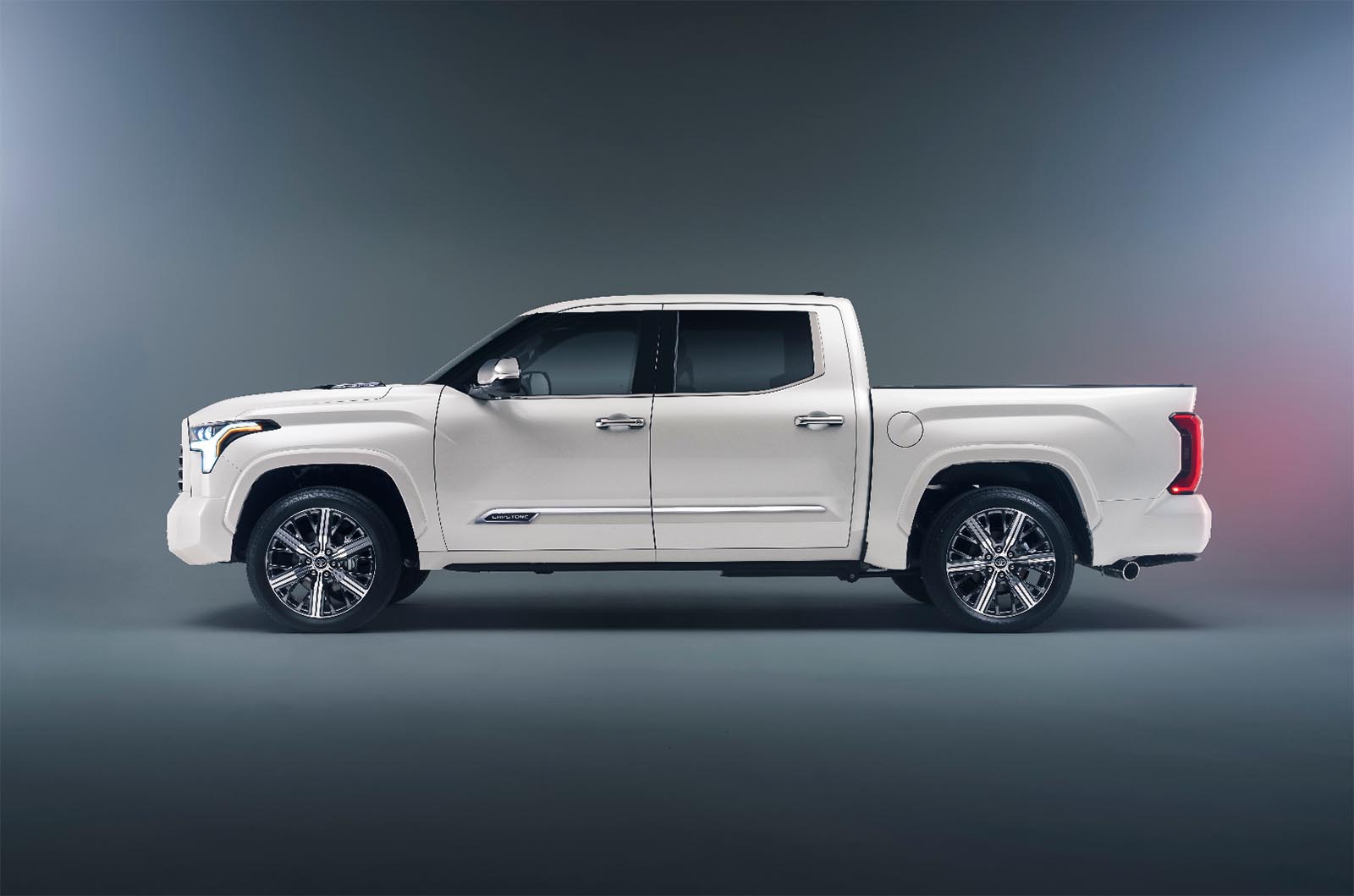 “The new Tundra Capstone grade provides a premium collection of features and upgrades for those looking to elevate their truck experience,” Toyota said in an announcement of the new model. “As the new halo grade in the Tundra lineup, Capstone builds on the already impressive features of Toyota’s all-new full-sized truck.”

Toyota has already added a number of new features to the Tundra line, which went through a complete makeover for 2022. The Capstone adds everything you’d expect to find in the 1794 Edition and then some. That includes 22-inch chrome wheels and tires, the largest ever offered on a Tundra, semi-aniline leather-trimmed seats, standard power-retractable running boards, and a 10-inch color head-up display.

The move up-market is no surprise. Based on price – as well as features – Detroit automakers already dominate the luxury segment with models like the Ford F-150 Limited and GMC Sierra Denali. Fully loaded, Ford’s heavy-duty F-250 Limited now goes out the door at over $100,000, not much less than a 2022 Mercedes-Benz S-Class. And, the profit margins on high-end trucks are some of the biggest in the industry.

Yet some industry leaders say there’s even more opportunity on the upside. “Every time we add(ed) a new premium edition, buyers (told) us they want more,” Doug Scott, the former marketing manager for Ford trucks told AutoWise.

With the addition of the new Capstone edition, Toyota now offers six different trim levels for the 2022 Tundra, starting with the base SR, then walking up through the SR5, Limited, Platinum, 1794 Edition, and for off-roaders, the TRD Pro. 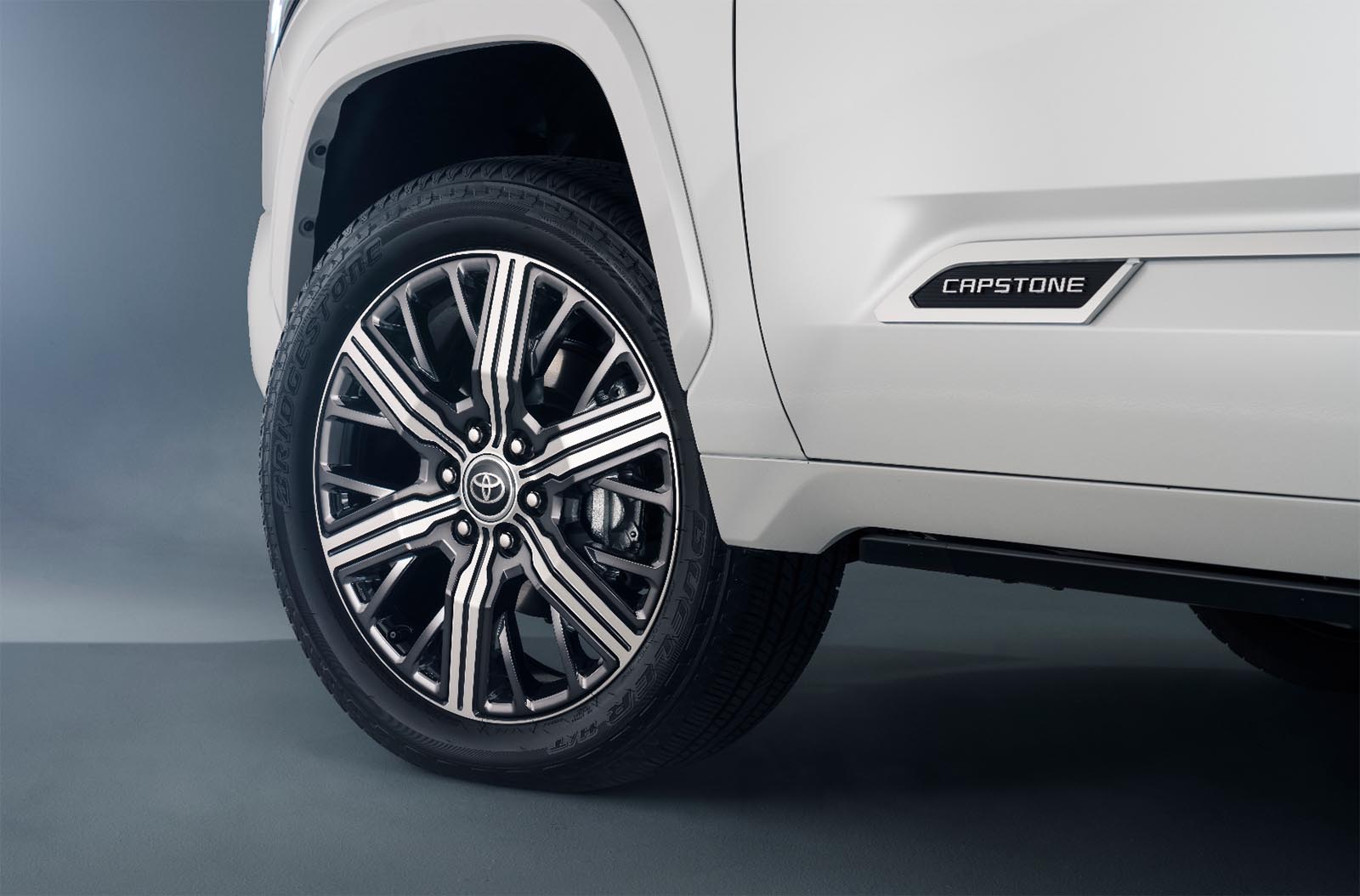 Along with the 22-inch wheels, the Capstone is visually distinguished by a color-keyed outer frame and a chrome inner mesh pattern. The mirror caps are chromed.

Inside, the leather-trimmed seats are complemented by a leather-wrapped steering wheel and dark American Walnut veneer on the center console and passenger-side dash. A panoramic moonroof is standard, along with adjustable interior mood lighting. 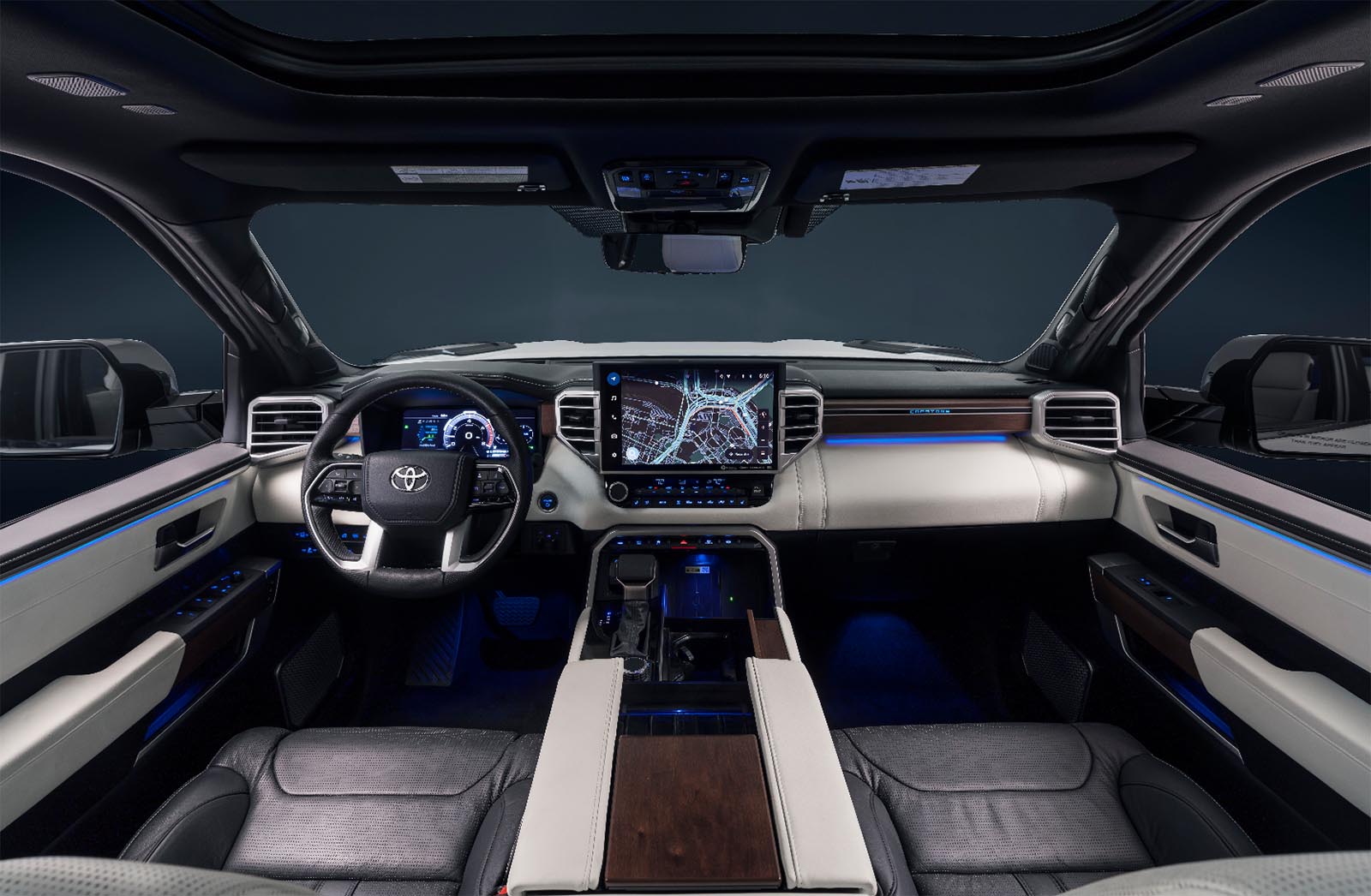 The Capstone brings a mix of features and capabilities, including the Towing Technology Package that comes standard.

The pickup is powered by the new i -FORCE MAX hybrid powertrain that produces 437 hp and 583 lb.-ft. of torque. The twin-turbo V-6 is paired with a 10-speed automatic sending power to all four wheels. This truck, says Toyota, may be plush, but it’s “still tough.”

Capstone’s Sheet-Molded Compound bedliner helps resist dings and scratches, the automaker promises, and can haul a payload of up to 1,485 pounds. The truck has a towing capacity of 10,340 pounds.

To cushion driver and passengers, the Tundra Capstone features hydraulic cabin mounts. And the seating adds an extra layer of plushness.

There will be a handful of options available when the 2022 Tundra Capstone goes on sale, including a Load-Leveling Rear Height Control Air Suspension. Adaptive Variable Suspension settings have been expanded on the Capstone to include Comfort, Sport S, Sport S+, and Custom modes. The mode control also adjusts a variety of other vehicle settings.

Whether cruising, towing, or hauling cargo, the Capstone features what Toyota describes as a “plethora” of cameras that can present different exterior views on both the 14-inch touchscreen and the standard Digital Display Rearview Mirror. Among other things, that includes a view of the cargo load and a split view showing either side of a trailer.

The infotainment system features the new Toyota Audio Multimedia system. Among other upgrades, a driver simply has to say, “Hey, Toyota” and then add a wide range of commands in plain English. The system can play Apple Music and Amazon Music for those with subscriptions, and it includes a 4G WiFi hotspot. 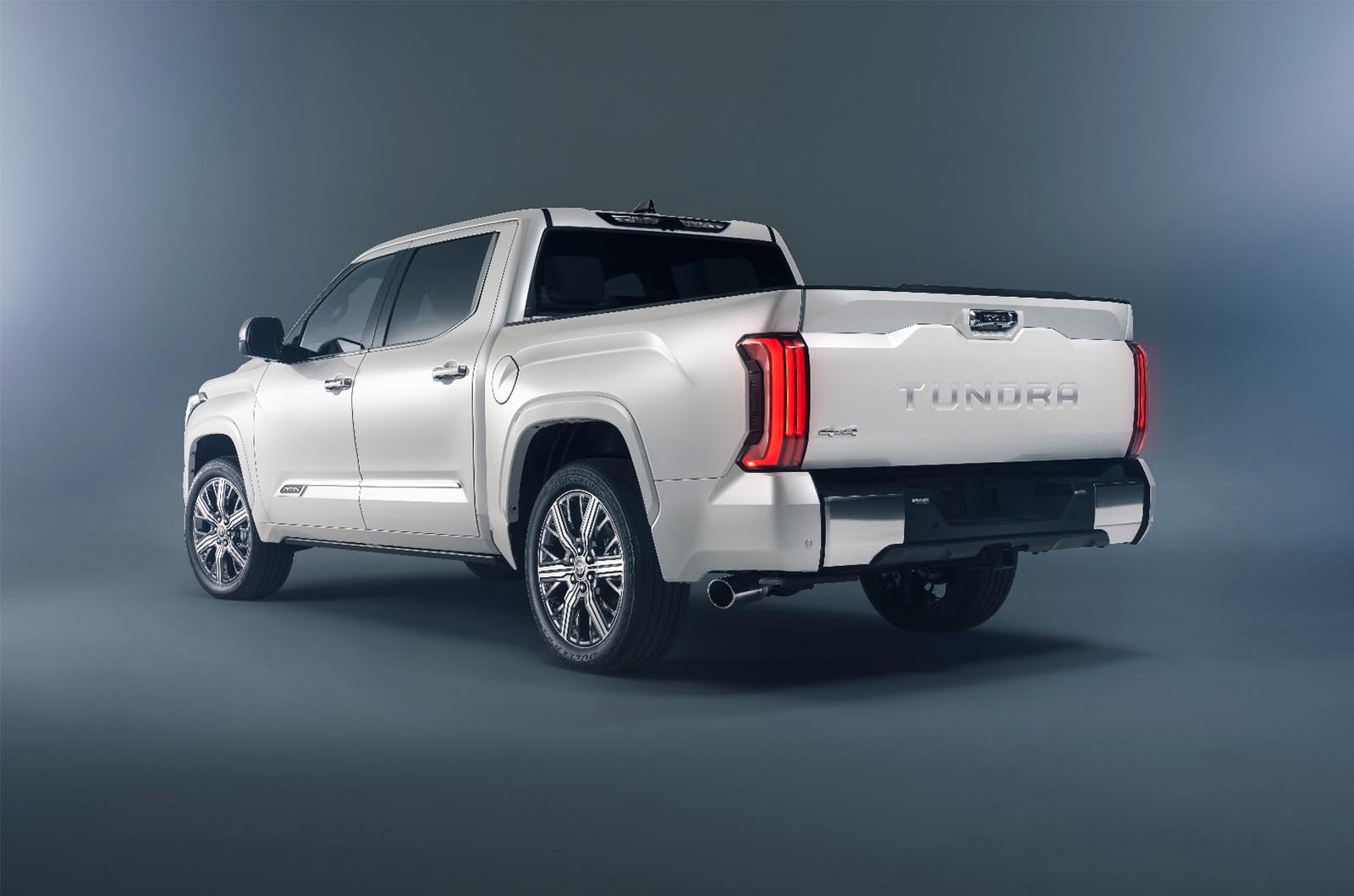 Look for the 2022 Toyota Tundra Capstone to reach dealer showrooms this spring. The automaker hasn’t announced pricing but, with the current top-line model, the 1794 Edition, starting around $60,000, the Capstone is widely expected to push up to, if not above, the $70,000 mark.