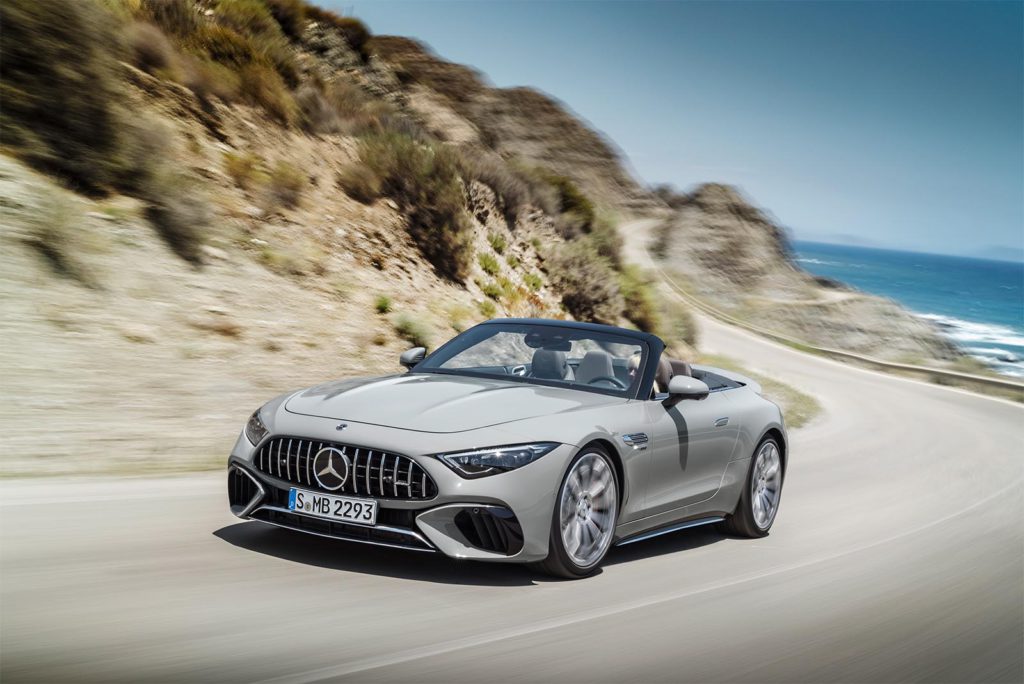 It’s clearly not roadster weather as we climb into the San Bernardino Mountains on a winding journey from Newport Beach to Palm Springs. We knife through thick fog and the occasional snow flurry as we brush 5,000 feet. Then again, it’s likely a perfect way to experience all that has changed with the 2022 Mercedes-AMG SL.

The SL roadster has been an icon of the Mercedes brand for nearly seven decades. It was born on the track, the original 1952 race model spinning off the legendary 300 SL Gullwing two years later. The first true roadster followed in 1957. 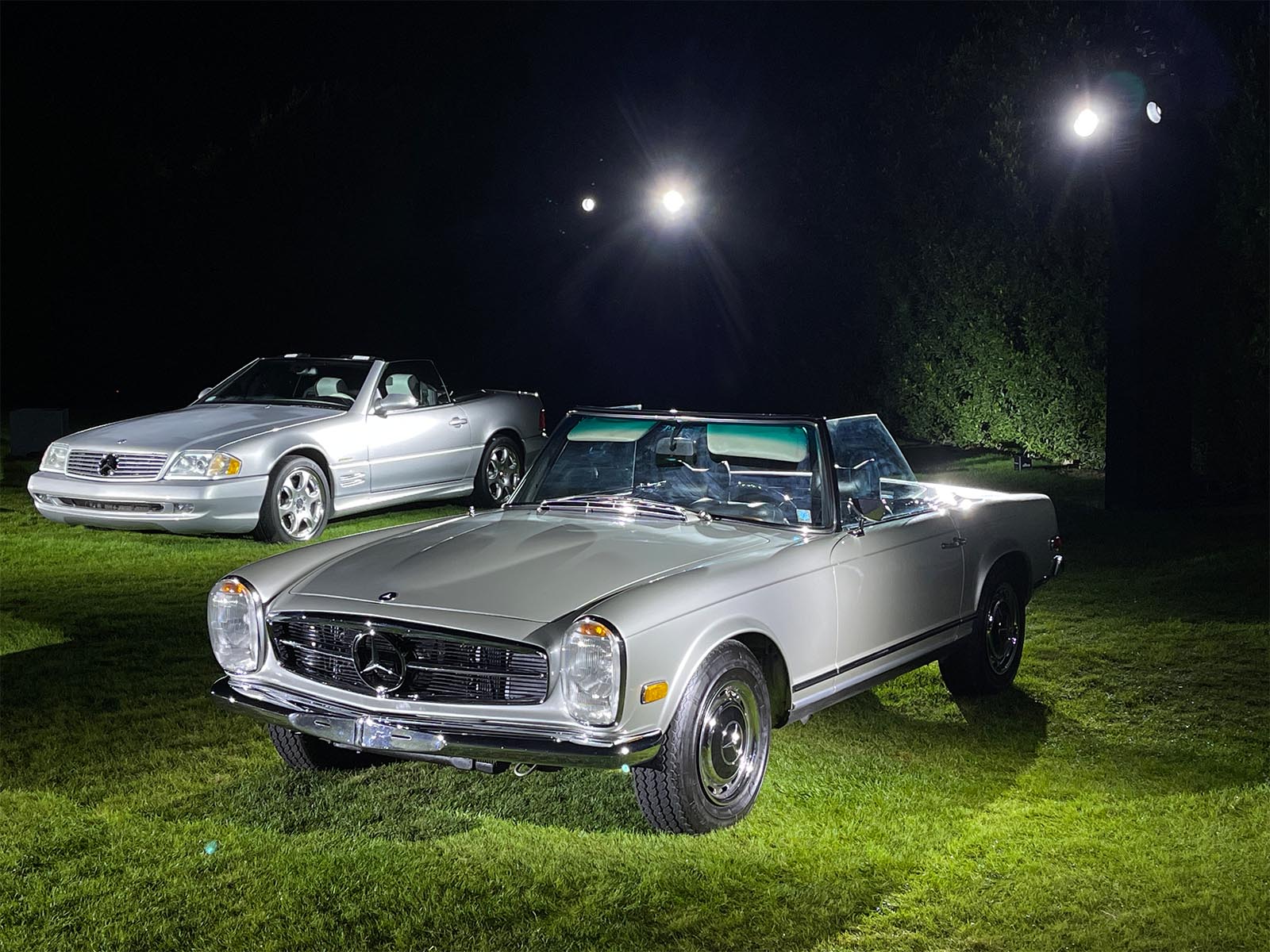 Over the decades, the “Super Leicht” or, if you prefer, “Super Light,” has undergone a number of notable changes. In 2001, it adopted a folding hardtop for the first time. But in its nearly 70 years, there has never been a more dramatic transformation as we’re seeing with the seventh-generation version of the Mercedes SL. 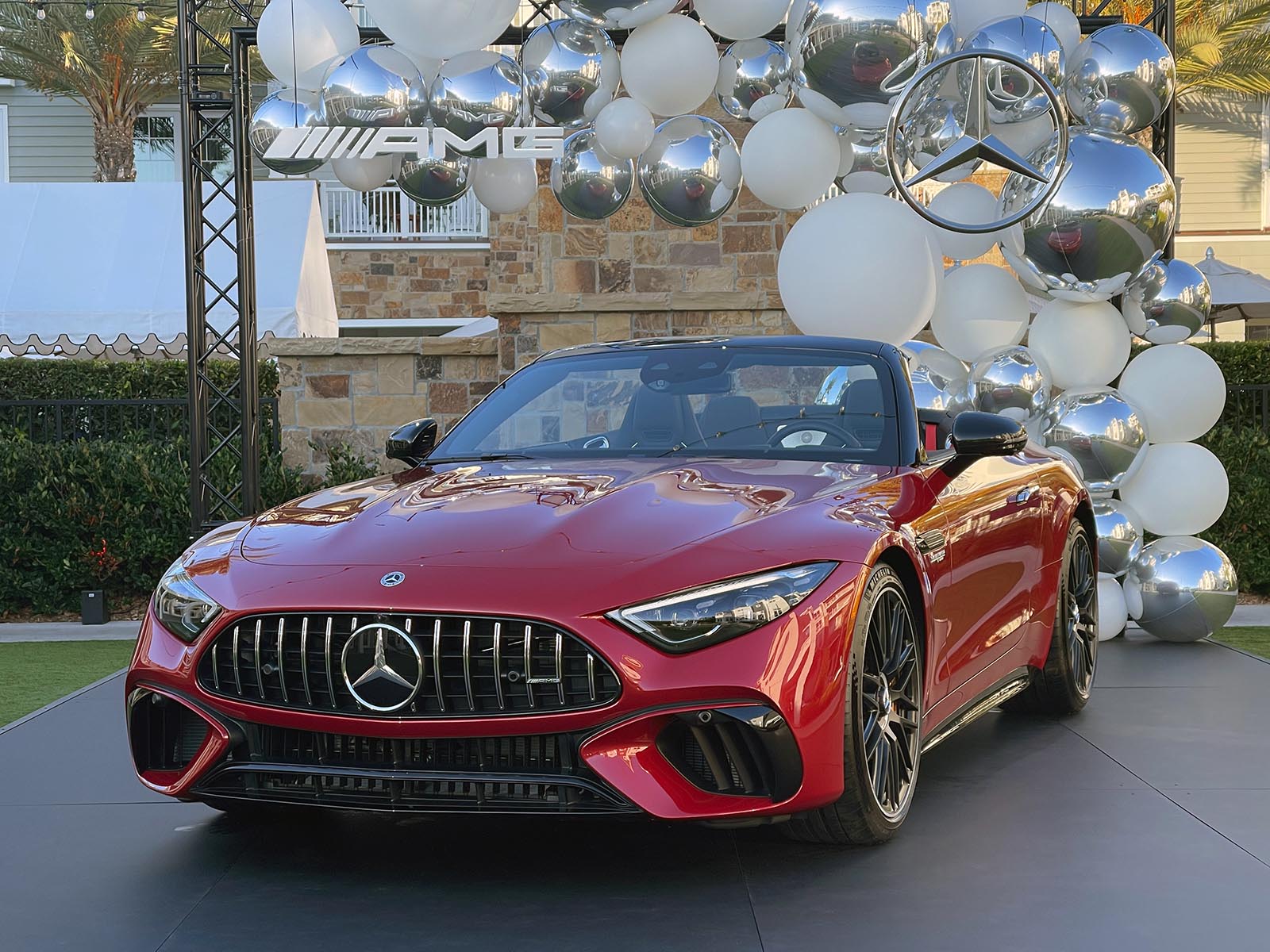 As has long been rumored, the 2022 Mercedes-AMG SL loses its hardtop, returning to a classic folding cloth roof. The roadster also grows a bit longer, providing room for a first-ever back bench. It also adopts a performance version of Mercedes’ 4Matic all-wheel-drive system. And, the subtle shift from Mercedes-Benz to Mercedes-AMG emphasizes the increasing sportiness of the 2022 makeover.

Despite all these changes, the new SL — known inside the German automaker as the R232 — is instantly recognizable, with its long, low nose and short rear deck. Yet a closer inspection does reveal some notable visual changes. The grille is larger and adopts 14 vertical struts — a paean to the original 1952 300 SL race car. New, slit-like LED headlamps flow into the front quarter panels. 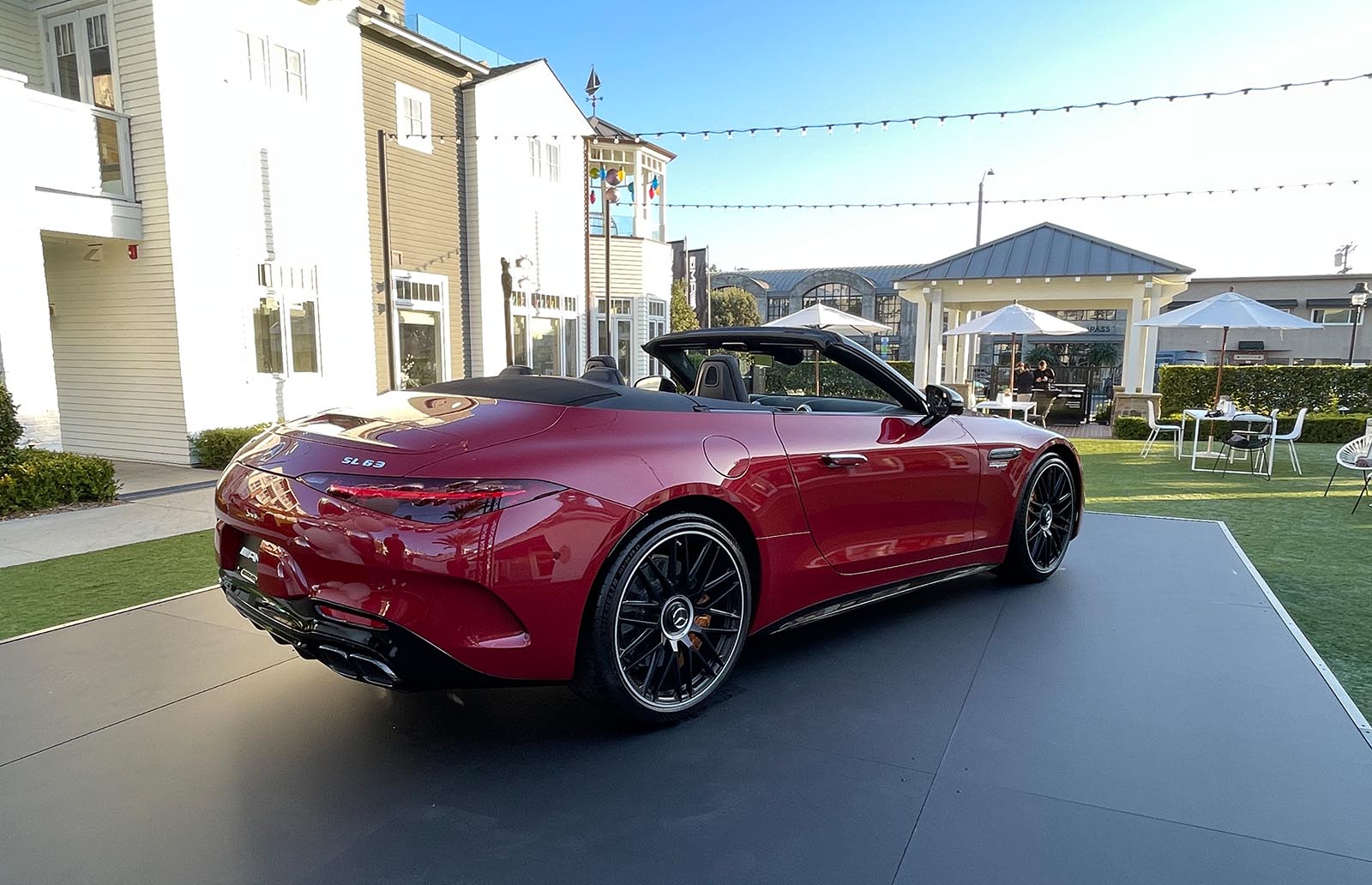 Around back, the 2022 SL adopts newer, narrower taillights. And an active rear spoiler deploys at any of five different positions at highway speeds to increase downforce. Indeed, aerodynamics were central to the redesign, helping improve performance while also reducing fuel consumption. That includes an active air tunnel system up front. Even the door handles have been redesigned, and now fold away when the SL starts moving.

A Grand Transformation, Inside and Out 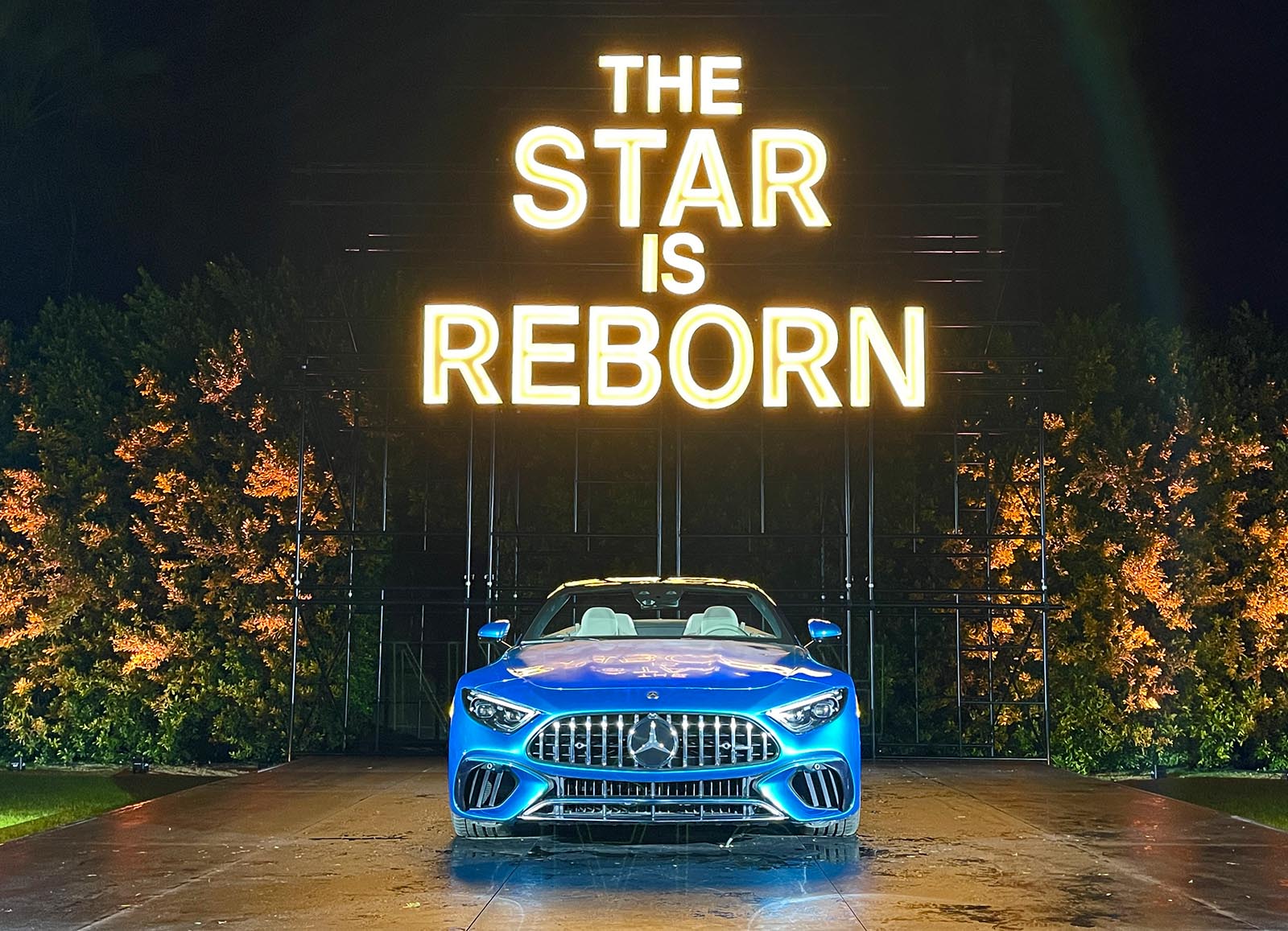 The R232 is a complete, ground-up reinvention of the Mercedes roadster. In keeping with the meaning of super light, it adopts a new aluminum spaceframe, while the overall dimensions are lower and wider, albeit a slight bit longer.

The return to a classic soft-top fits with that mantra, shaving off 46 pounds of mass compared to a folding metal roof, while also lowering the roadster’s center of gravity. The new design is seamless and features three layers, including a center acoustic mat. 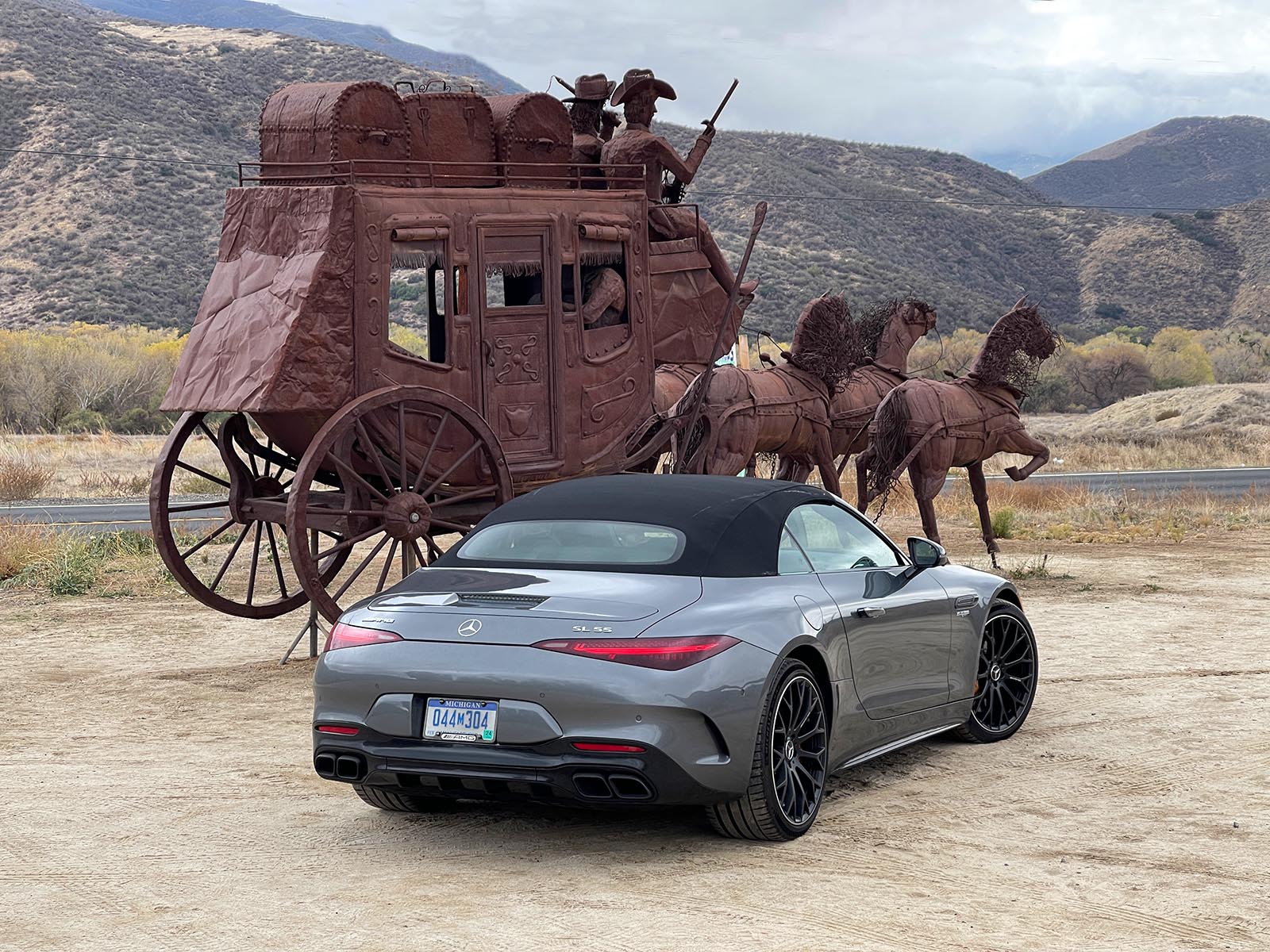 At highway speeds, it’s nearly as quiet as the last-generation hardtop. As before, operating the top is a one-button process that takes a mere 15 seconds. As we pop in and out of sunshine and drizzle on the drive through the mountains, that’s something I quickly learn to appreciate. 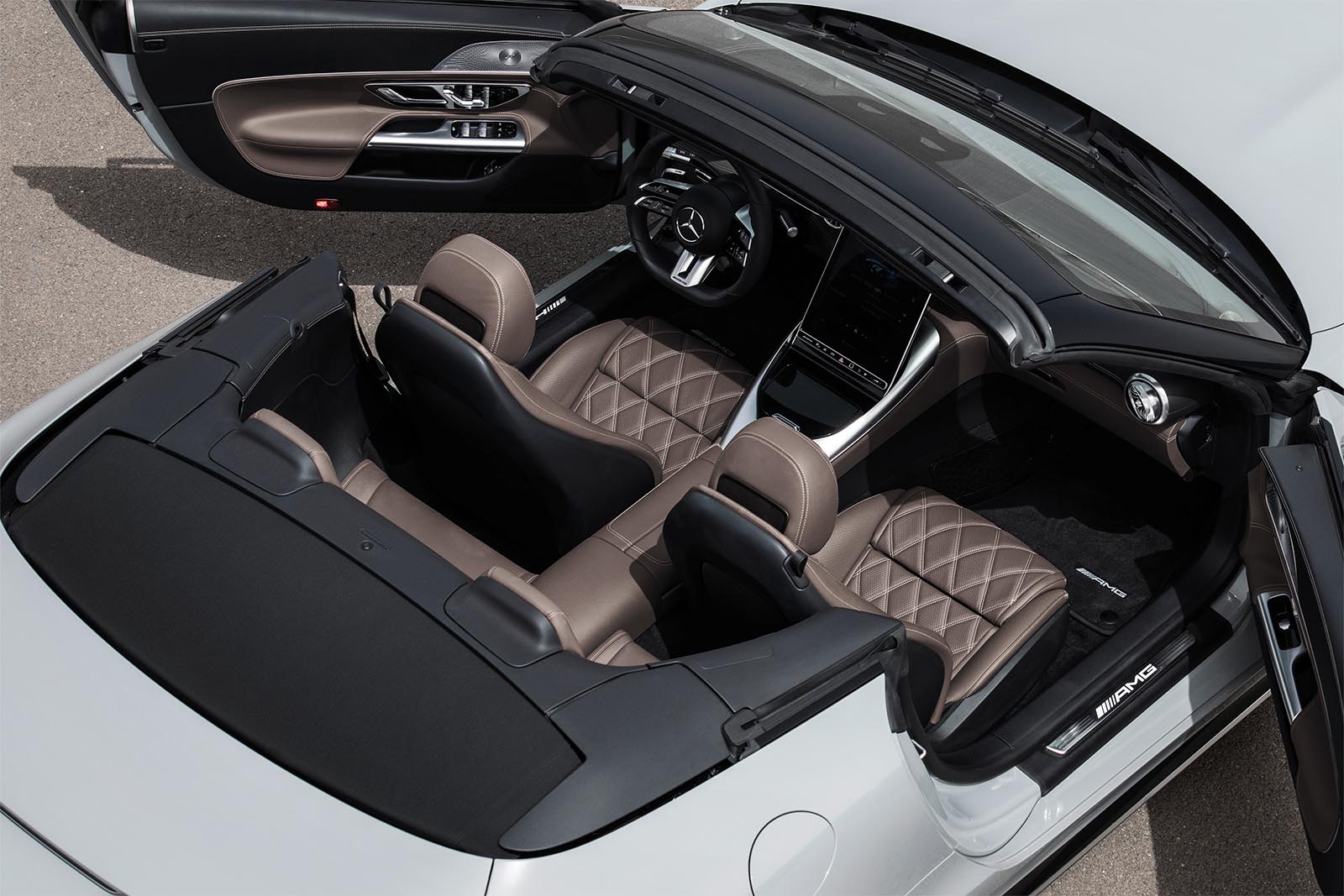 Nowhere is the makeover more apparent than inside the new SL’s cabin. Here’s where you find most of the roadster’s added length. In reality, don’t expect that to translate into even C-Class roominess. Sticking two adults in the new back seat won’t exactly win you friends. The bench is barely useful for a couple of young children and is most likely going to be used for carrying groceries or a computer bag.

The front seats are sporty in appearance and function. They’re more sculptural, with the headrests molded into the backrest. On a day like this, it’s easy to appreciate the Airscarf system that blows warm air onto the head and neck whenever we find a moment to put the top down. The feature can extend open-top driving season by months, depending on where you live. 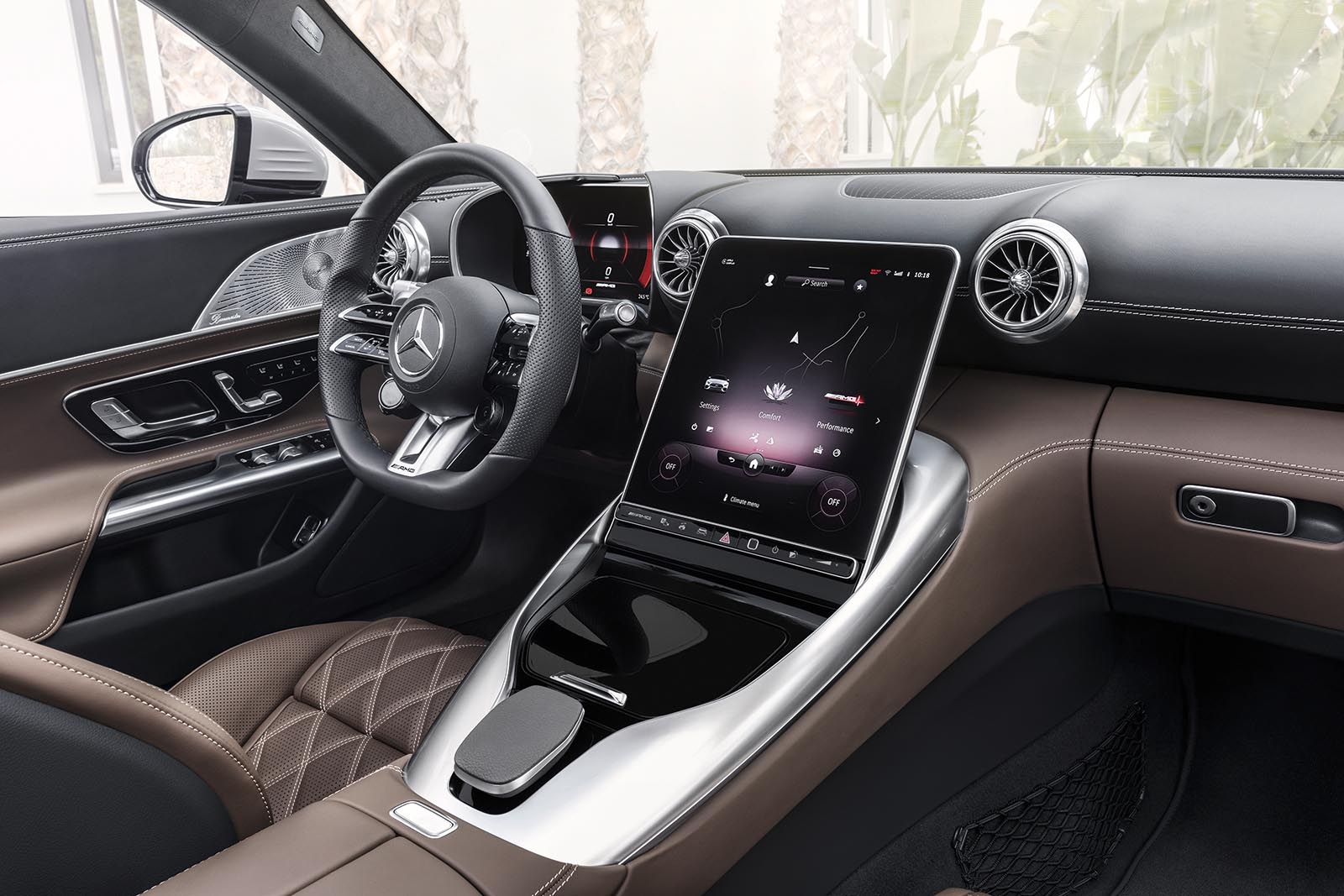 As has become the norm with the latest Mercedes models, there’s an emphasis on technology. The SL’s “hyper analogue” cockpit features a digital instrument cluster with a simulated 3D display. One of the more interesting features is the large touchscreen display that rises out of the center console. It floats in front of the instrument panel and can be tilted, as needed, to reduce glare when driving with the top down. 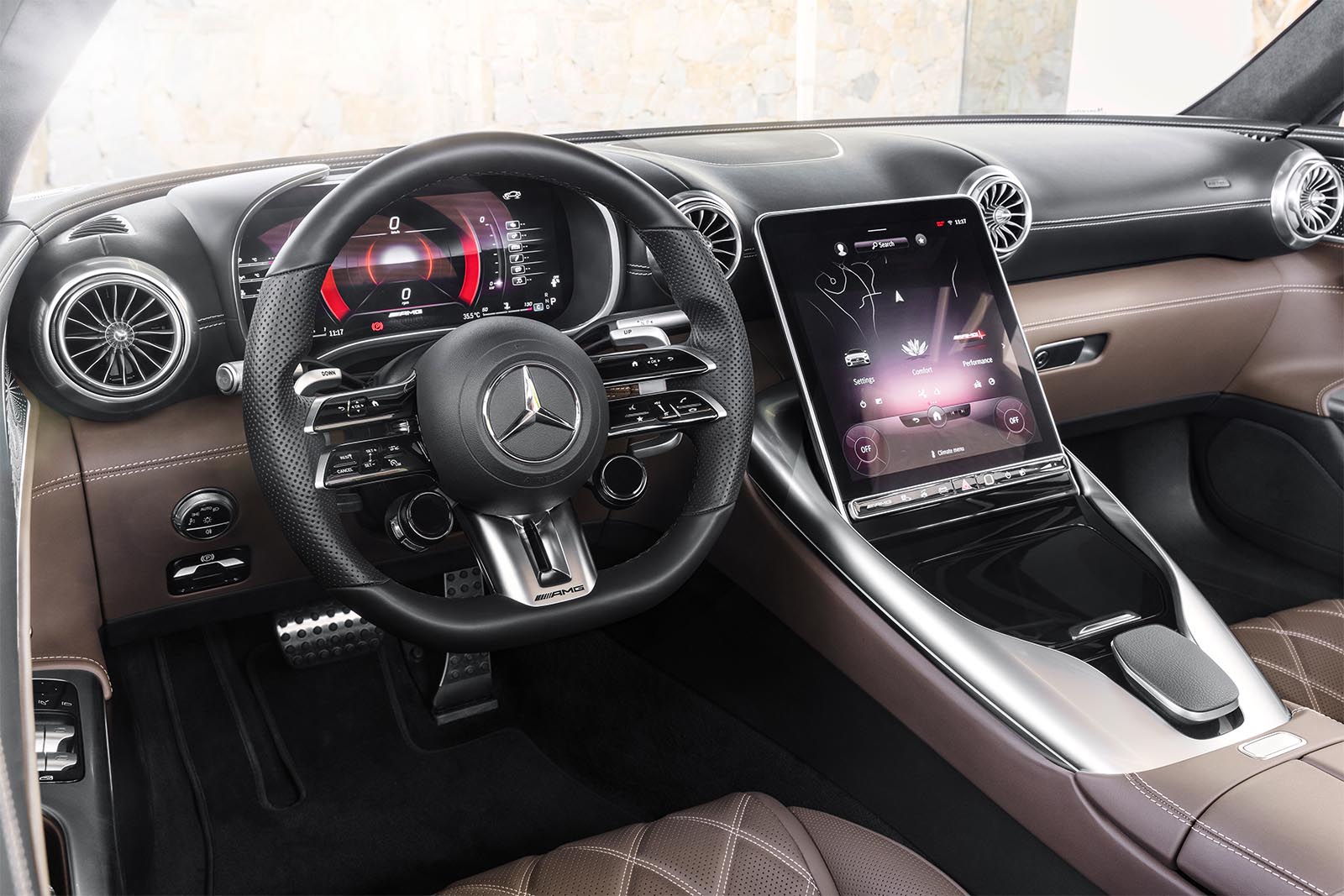 The SL also gets the MBUX operating system with a voice assistant that immediately wakes up when you say, “Hey, Mercedes.” While it’s not quite as knowledgeable as Amazon’s Alexa, it can operate most vehicle functions using plain English commands. 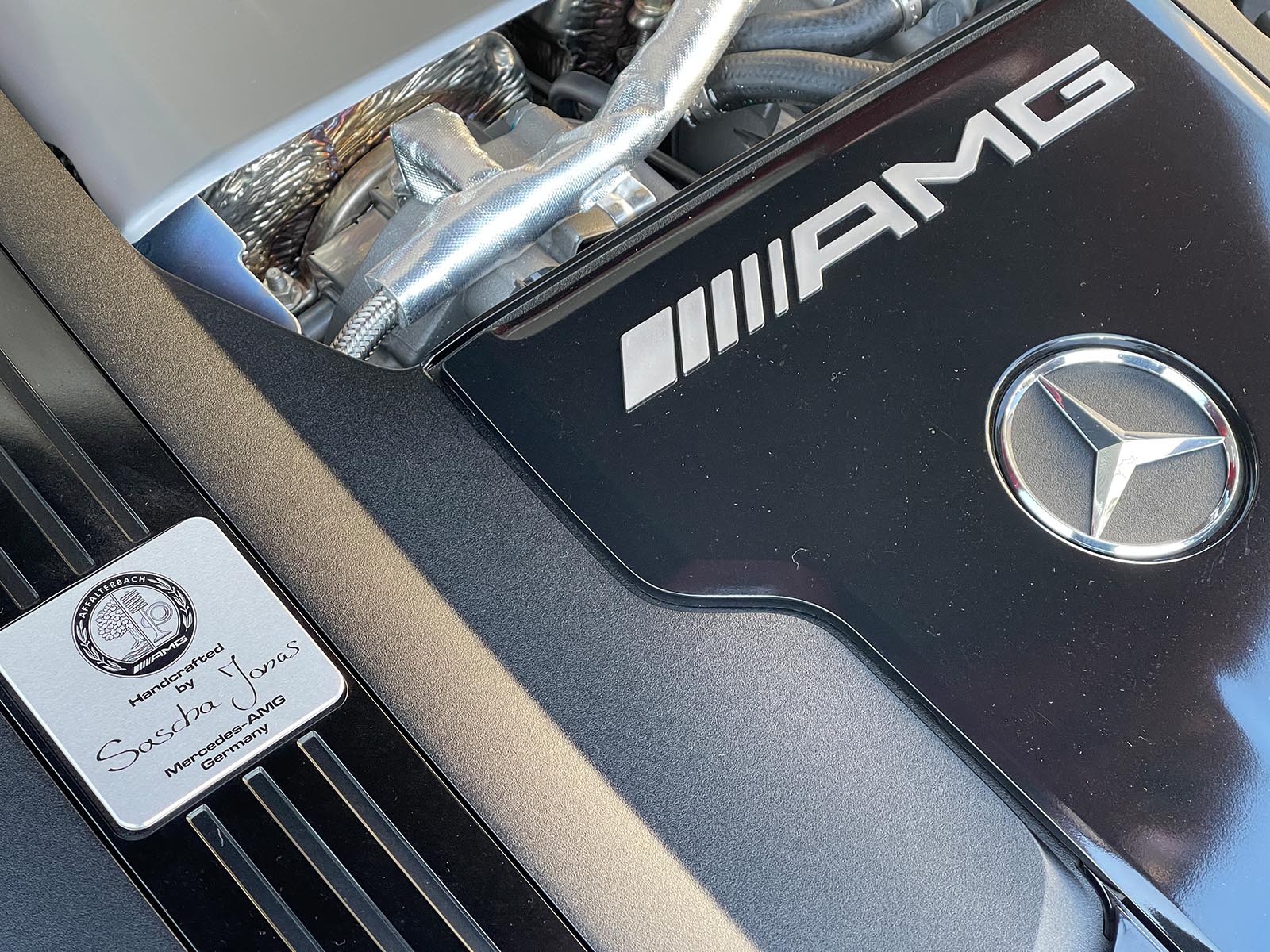 Of course, like all AMG models, the two engines were built by hand by a single worker, with a stamped certificate bearing the worker’s name mounted atop the engine. 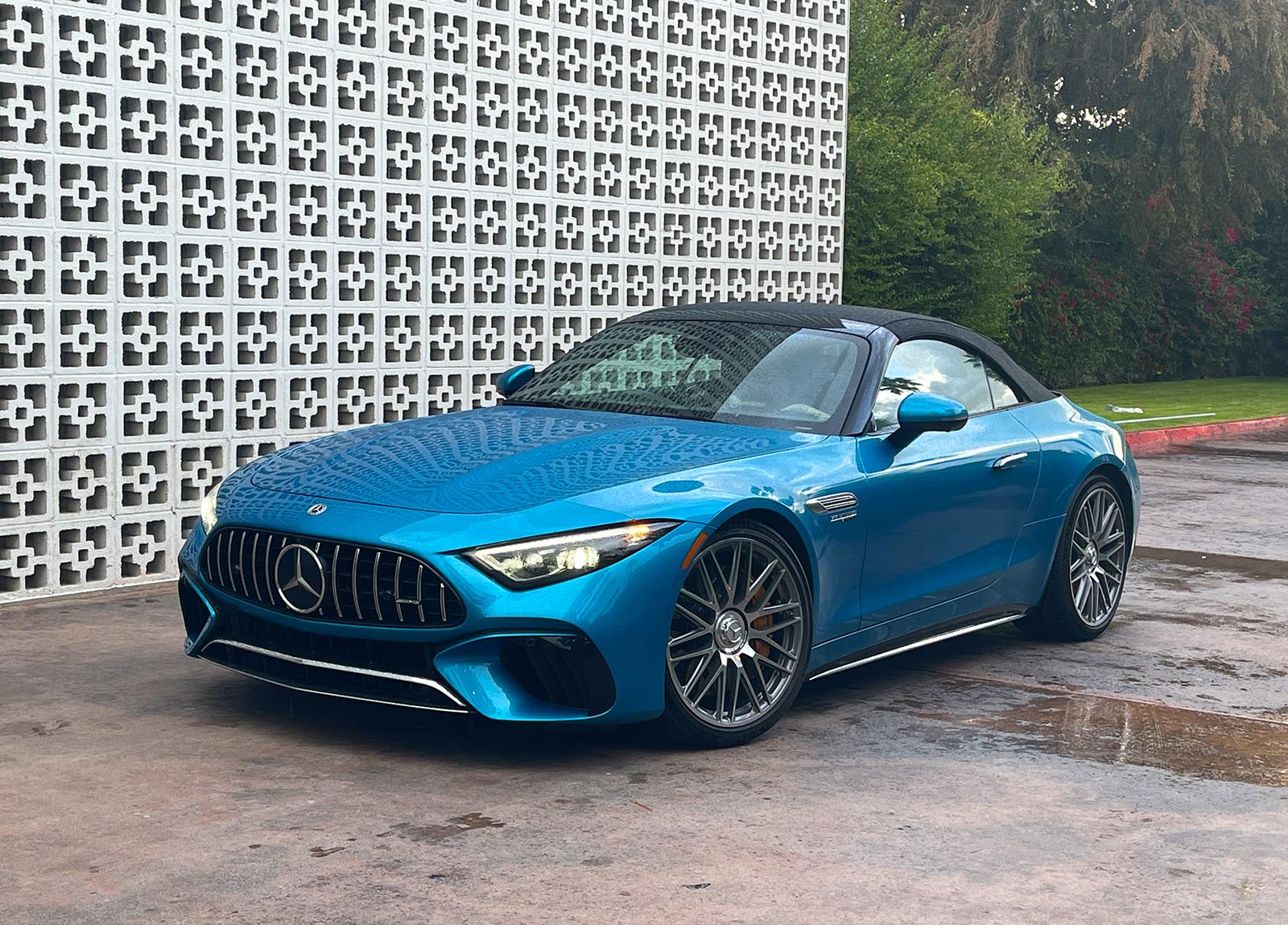 Here’s where one finds the most radical shift made to the 2022 Mercedes-AMG SL, certainly from a performance perspective. Power flows through a 9-speed AMG Speedshift transmission into the new 4Matic all-wheel-drive system.

It has been customized by AMG and, under nominal conditions, pushes torque to the back wheels. But the system responds all but instantly, as warranted by road conditions or driver input, moving torque wherever it’s needed.

I quickly learned to appreciate the system’s benefits as we took a detour onto a torturously twisted back road that would have given a slot car trouble. The SL 55 remained glued to the road as we weaved in and out of tight corners. 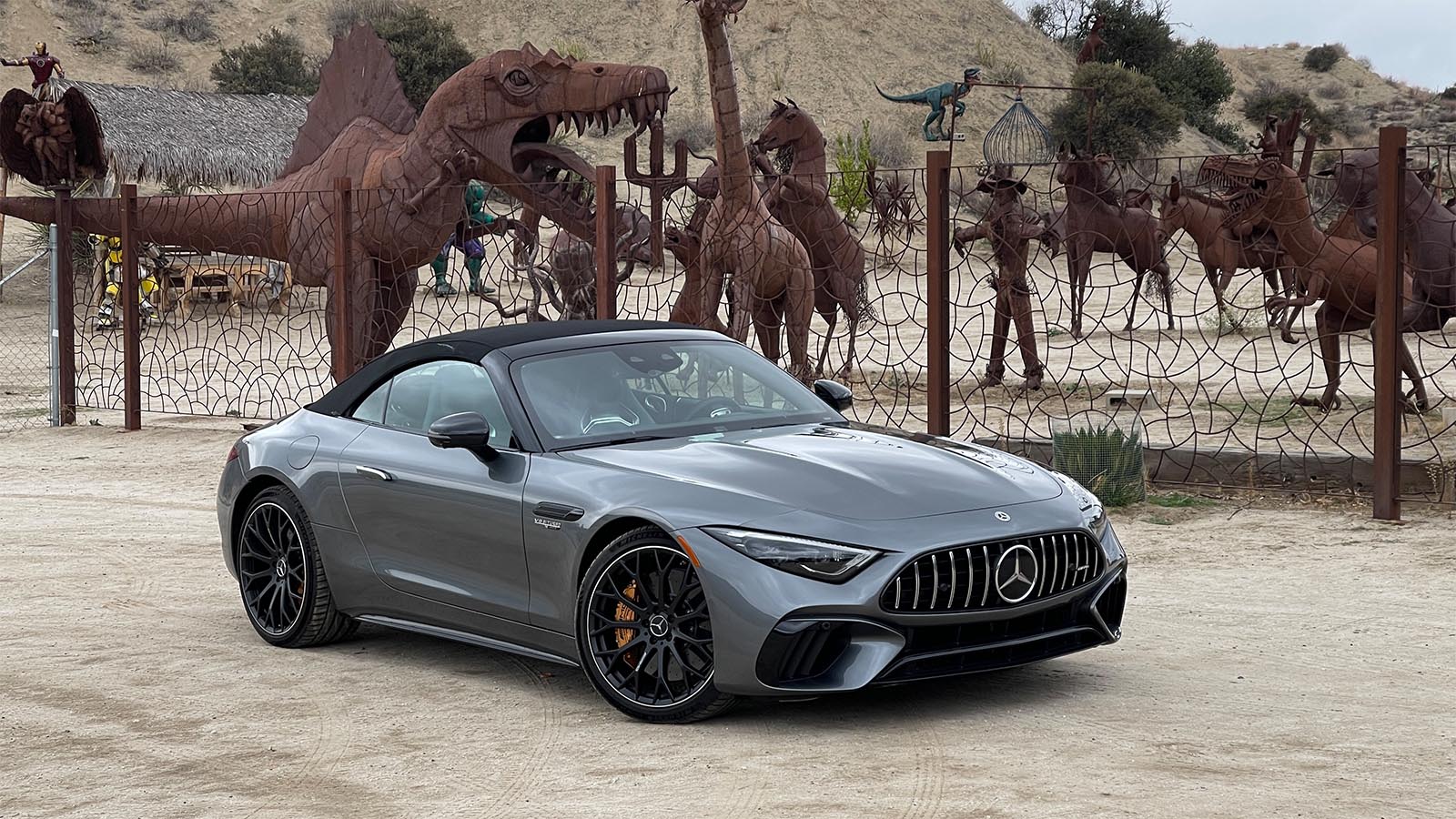 The active ride control system standard in the SL 55 also helps keep the roadster planted firmly on the pavement. The SL 63 takes things a step further, adopting a hydraulic version of the active ride control system. That package eliminates the SL’s conventional torsion beams. Instead, it flows hydraulic fluid from one side of the 2+2 to the other, as needed, to firmly keep the roadster’s wheels attached to the road.

2022 Mercedes-AMG SL: A Roadster for Every Occasion 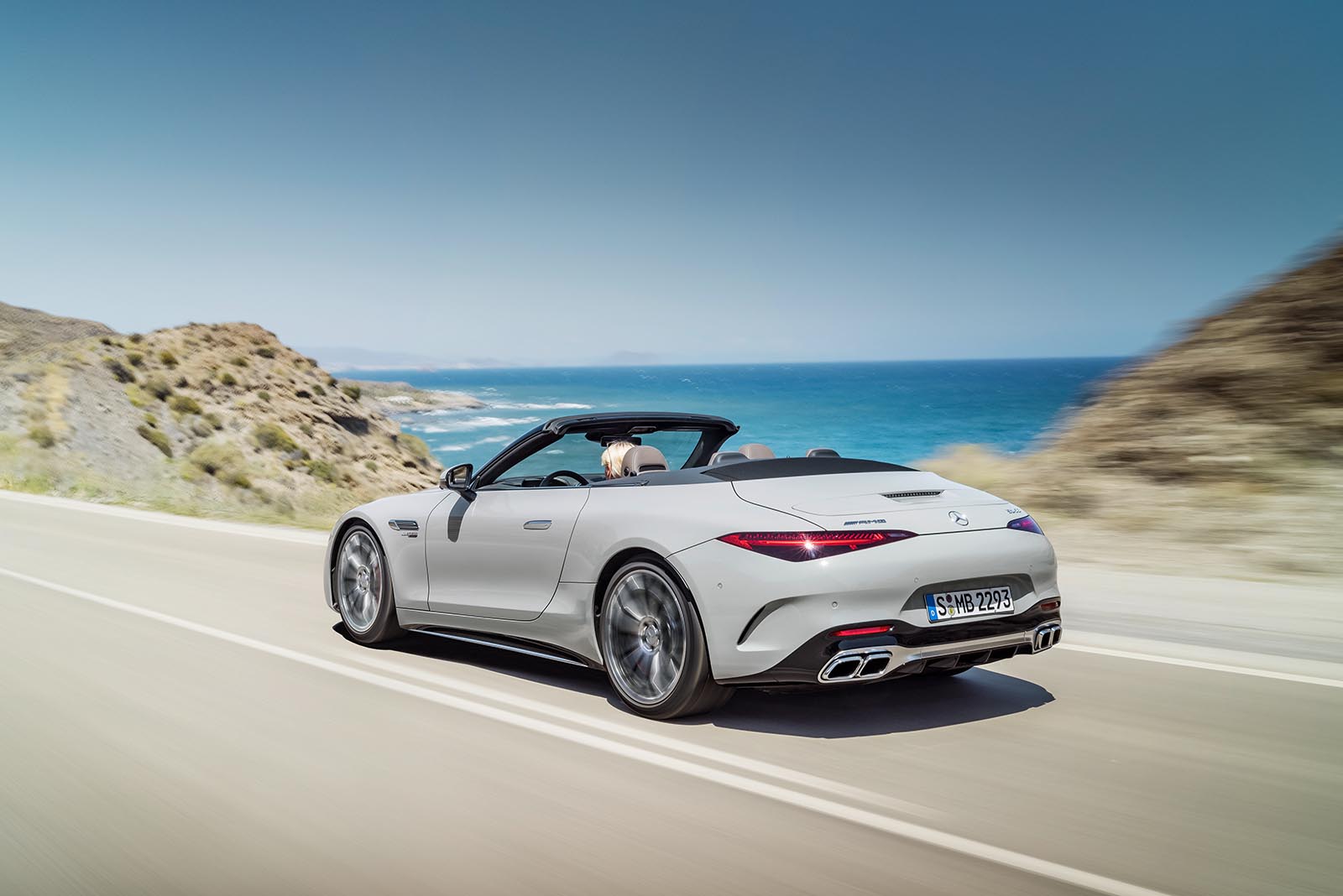 Add up all the features, and it’s clear that Mercedes has taken the 2022 Mercedes-AMG SL roadster to a new level. As has long been the case, it’s a delightful grand touring machine, a car you can be proud to be seen in and great to take on long journeys.

But the AMG name has been imprinted on the new model’s very soul. It invites aggressive driving like never before, rewarding the driver with each tight turn.

For now, there are just two versions of the 2022 Mercedes-AMG SL available. But we can expect to see another to follow, the automaker hinting that it is working up “an electrified powertrain that further enhances driving dynamics while also being highly efficient.” This hybrid could arrive in showrooms for 2023.

Mercedes will roll the new roadsters into U.S. showrooms in the first half of 2022. It hasn’t released pricing yet, but the SL 55 is expected to start right around $100,000.