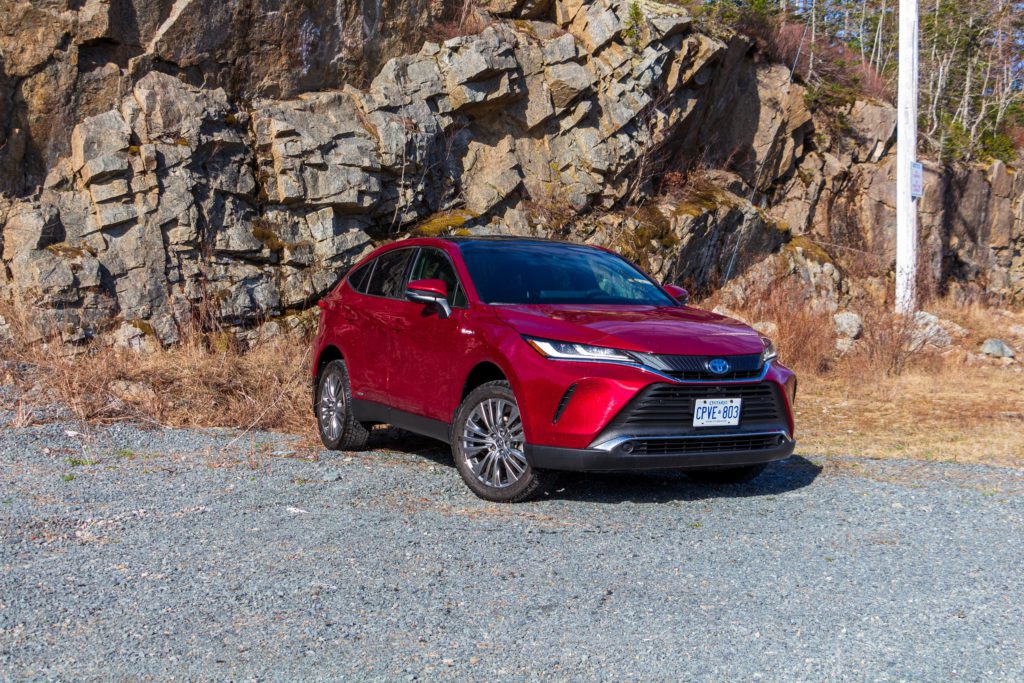 If you’re looking at the 2021 Toyota Venza and wondering how it fits into the brand’s growing lineup, you’re not alone. The RAV4 is a compact that looks off-road ready, and so is the new Highlander. Above that, Toyota has even more rugged models, and below, they have the tough-looking Corolla Cross.

So what’s up with this mid-sized and confusingly styled middle offering? Don’t look at Toyota’s other crossovers; that’s the trick. Look at the two generations of Camry Solara and the long-running Camry coupe that came before it. That’s the direction Toyota has pointed the 2021 Venza.

Taking a look back to the 1970s, you’ll find the pinnacle of the personal luxury car — a two-door model with a full-size rear seat that emphasized style and comfort over performance. Eventually, even Toyota joined the party in the 1980s with the Camry Coupe and later the Solara competing with cars like the Chevrolet Monte Carlo and Ford Thunderbird.

Today, the Monte Carlo has been replaced by the Blazer and the Thunderbird by the Edge, crossovers that are style-forward, with rugged looks and high-performance aspirations falling by the wayside. The 2021 Toyota Venza follows that pattern. And arguably, it got there first when the first-generation model arrived in 2008.

The question then becomes how does it now perform as a boulevard cruiser and a car for empty nesters and middle-aged urban mid-level managers? 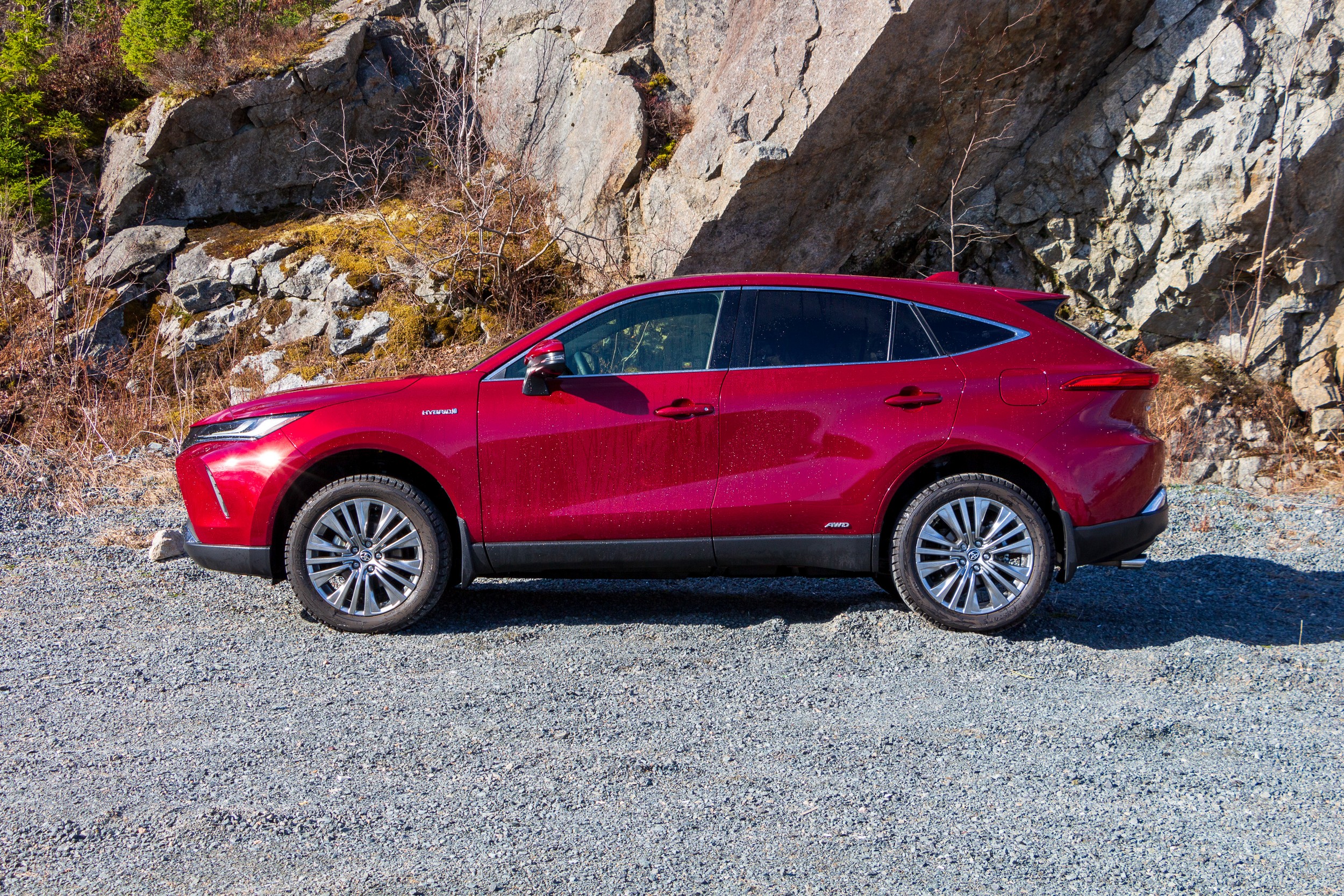 Let’s start with the styling. The nose features a massive grille and a chrome bar that seems more current Honda than present-day Toyota, but as you move rearward, things improve. The 2021 Toyota Venza has the roofline of a dozen crossover coupes but manages to stand out thanks to flanks featuring deeply cut shapes at both the window and bottom of the doors.

The stubby hatch and large, grey plastic bumper help make the rear end look more like a wagon than an SUV. The full-width taillamps are sharp, and the edgy rear spoiler creates a false roofline at the rear.

Having such a short tailgate and tall bumper means the cargo floor is high. This is a downside if you’re planning on loading a week’s worth of gear for two young children, but ideal if you’re throwing in four golf bags, suitcases for a weekend by the water, or that antique chair you have to have.

If you’re driving in this class of vehicle, and you have something bigger to haul, you were planning on getting delivery and setup anyway. So why sacrifice style? Plus, the Venza is larger than it looks; it’s just not that tall. 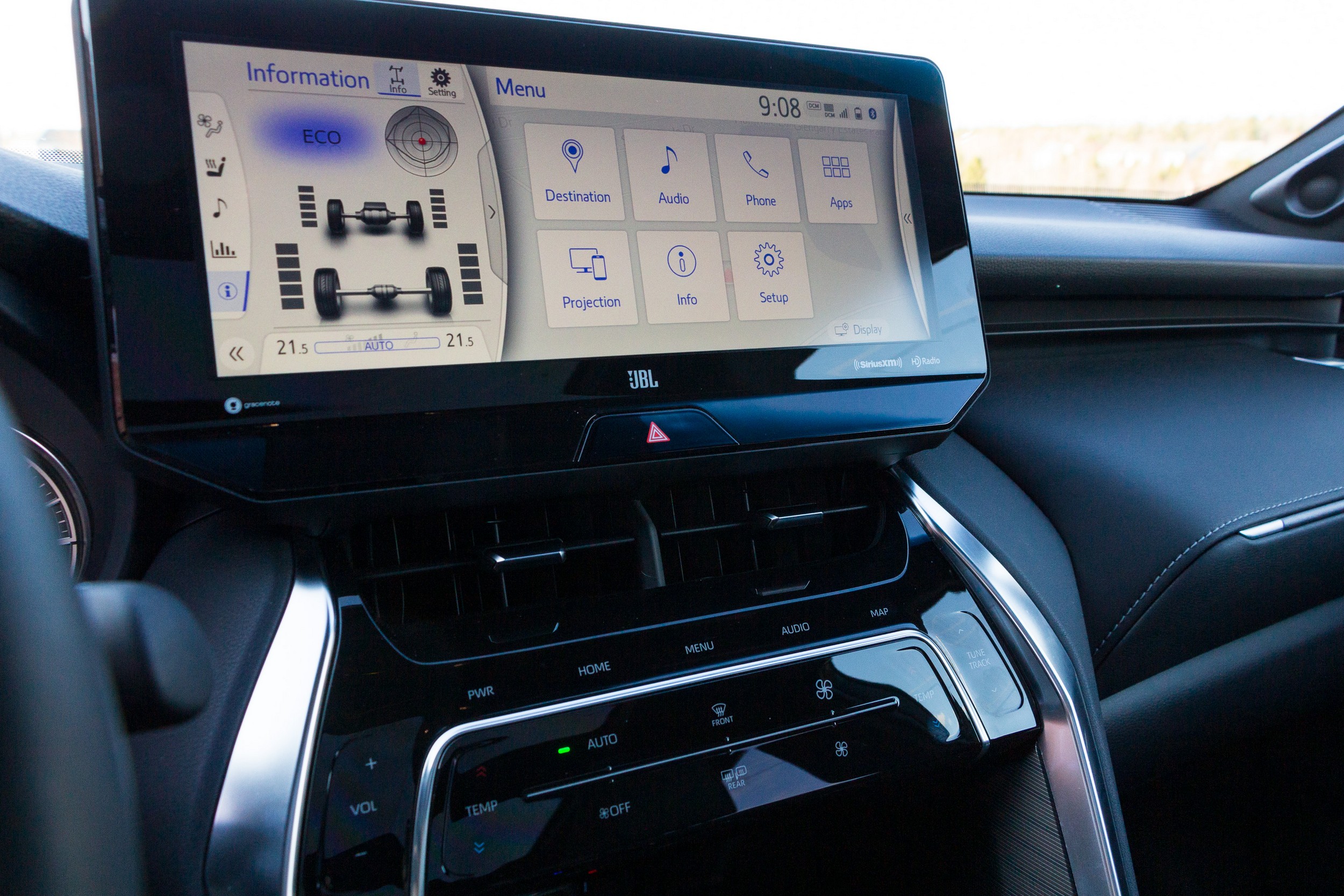 Come cruising time, the 2021 Toyota Venza uses a 2.5L 4-cylinder and pair of electric motors that are found in nearly every Toyota and Lexus hybrid model larger than a Prius. Here, the output is 219 hp combined, and all-wheel drive is the standard kit thanks to Toyota’s simple system that puts a motor on the rear axle instead of a center differential and driveshafts.

Drive it the way it was intended, which is to say not in a hurry, and this is a quiet and smooth driveline. The electric motors do most of the work, and they do it unobtrusively. Ask for more, and the 176 hp 4-cylinder roars to life with a clatter, and a rattle made even more jarring by how quiet the Venza was when driving normally.

At slow, in-town speeds, instead of the engine, the noticeable cabin noise came from Toyota’s hybrid alert sound, which is standard for all of their hybrid models but was, for some reason, particularly grating in the Venza. The combination of engine noise and warning noise greatly impacted the driving experience, but if I was in the sweet spot, say 55 mph back-road cruising, the Venza was near-silent.

Fuel economy is rated at 40 mpg city, 37 highway, and 39 combined. I saw 39 mpg in my own driving, which makes it the only Toyota hybrid SUV where I’ve found the actual fuel economy to meet the official rating. 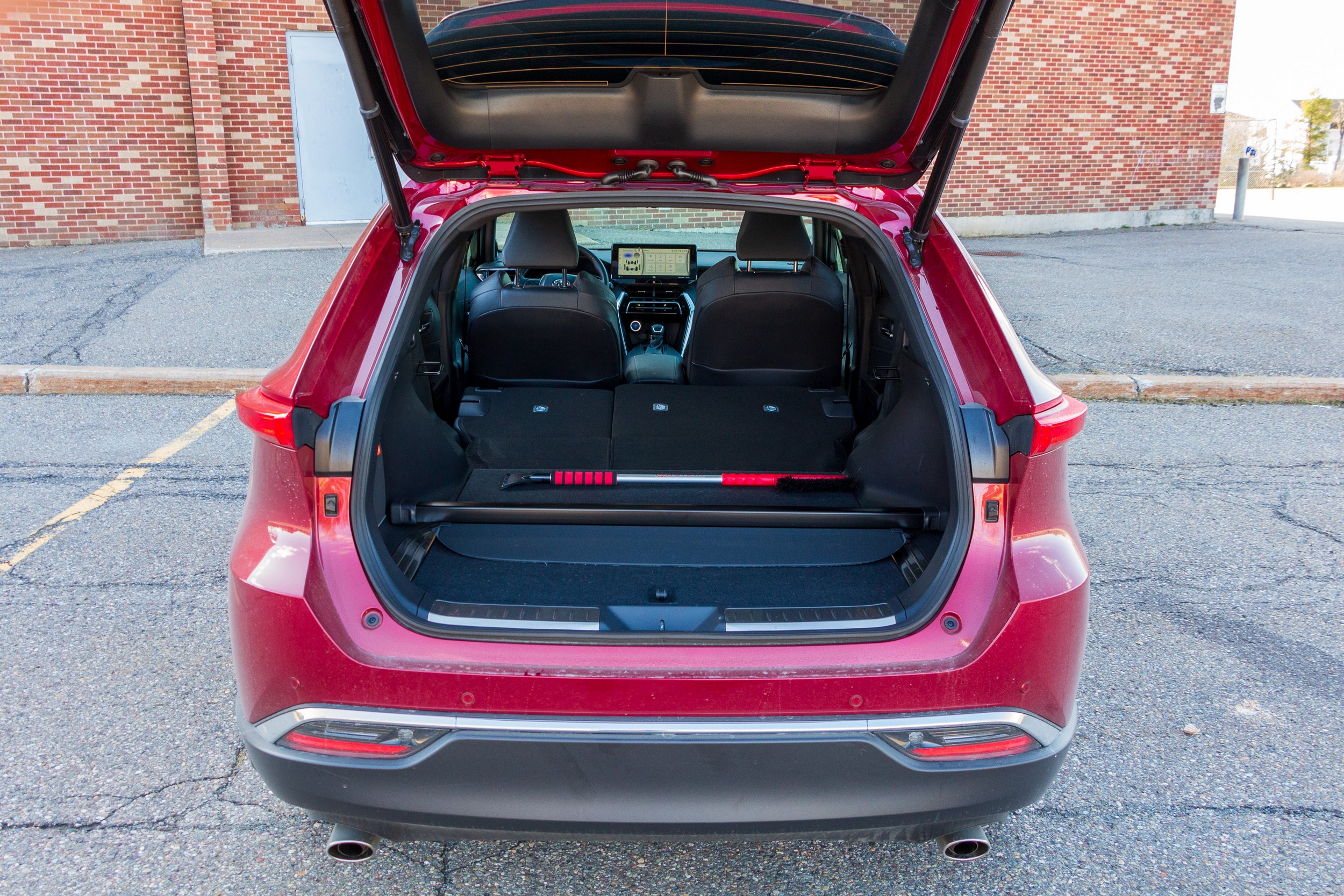 Once I got past the powertrain noise, the ride was sufficiently smooth, if a touch more on the wooden side than Toyota buyers might expect. It’s certainly softer than the Highlander, even when fitted with the massive 19-inch wheels and low-profile tires, but it was never unpleasant.

I found the 2021 Toyota Venza was one of those rides that really produced nothing noteworthy. Not good enough to impress, not bad enough to notice. It just was.

On large bumps, though, the structure felt quite flexible. I spent a solid hour chasing a rattle to make sure it was the interior of the Venza making the noises and not some loose piece of cargo. This is a modern vehicle, built on Toyota’s latest platform, but the structure felt at least a decade old as far as rigidity was concerned. 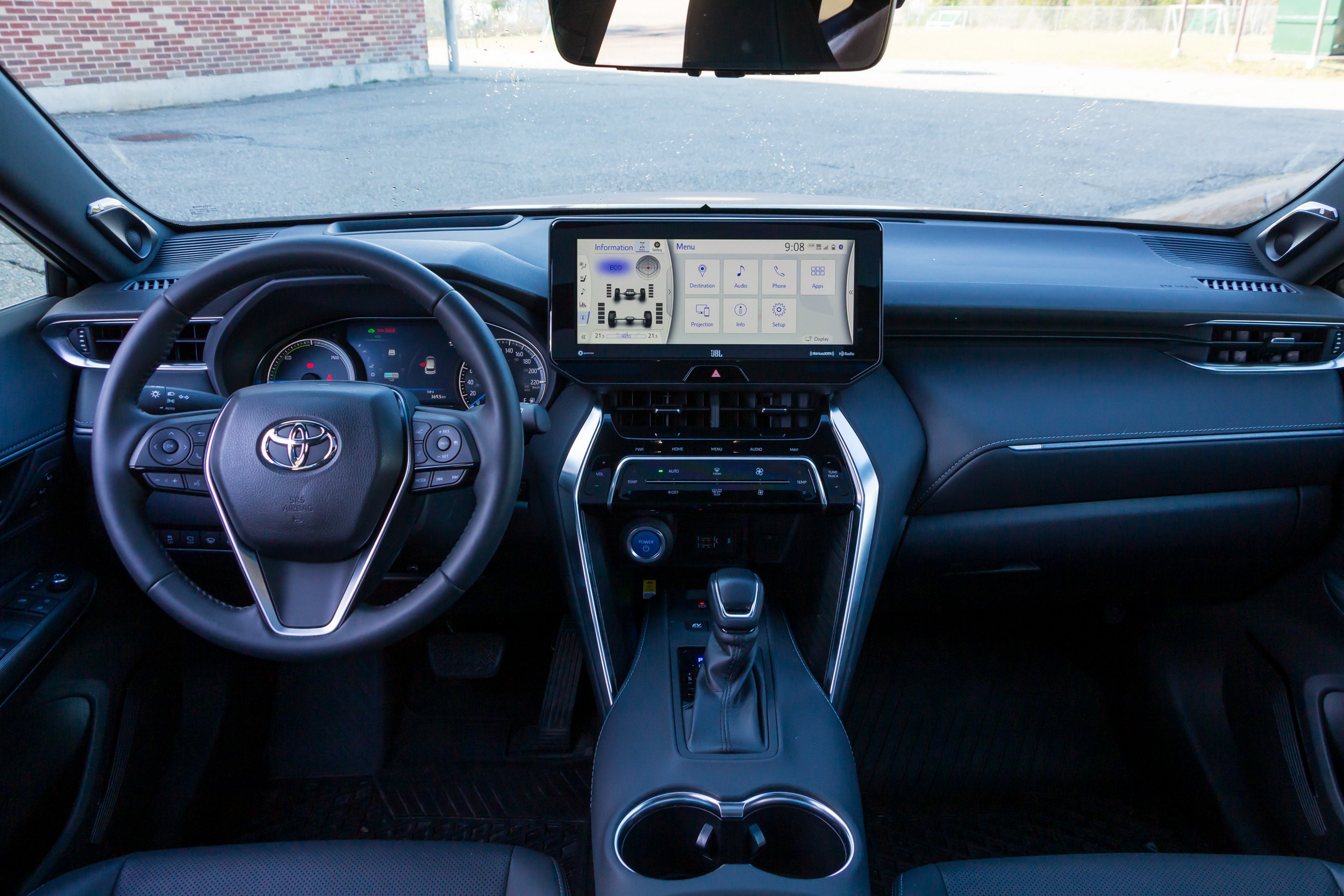 I feel Toyota’s interiors are at least a decade old. The 2021 Toyota Venza is tight for anyone much more than six feet for both front and rear-seat headroom, which has been my experience in every current vehicle the brand builds. It’s especially tight in the back seat, so if you’re tall, look elsewhere.

Toyota’s insistence on a massively chunky steering wheel and the same blocky buttons they have been using for years made the Venza feel older. The infotainment system uses the same dated interface found on Toyota’s other models, though the 12.3-inch touchscreen (an upgrade from 8.0-inches on lesser trims) felt more responsive than it has on some other of the brand’s models. 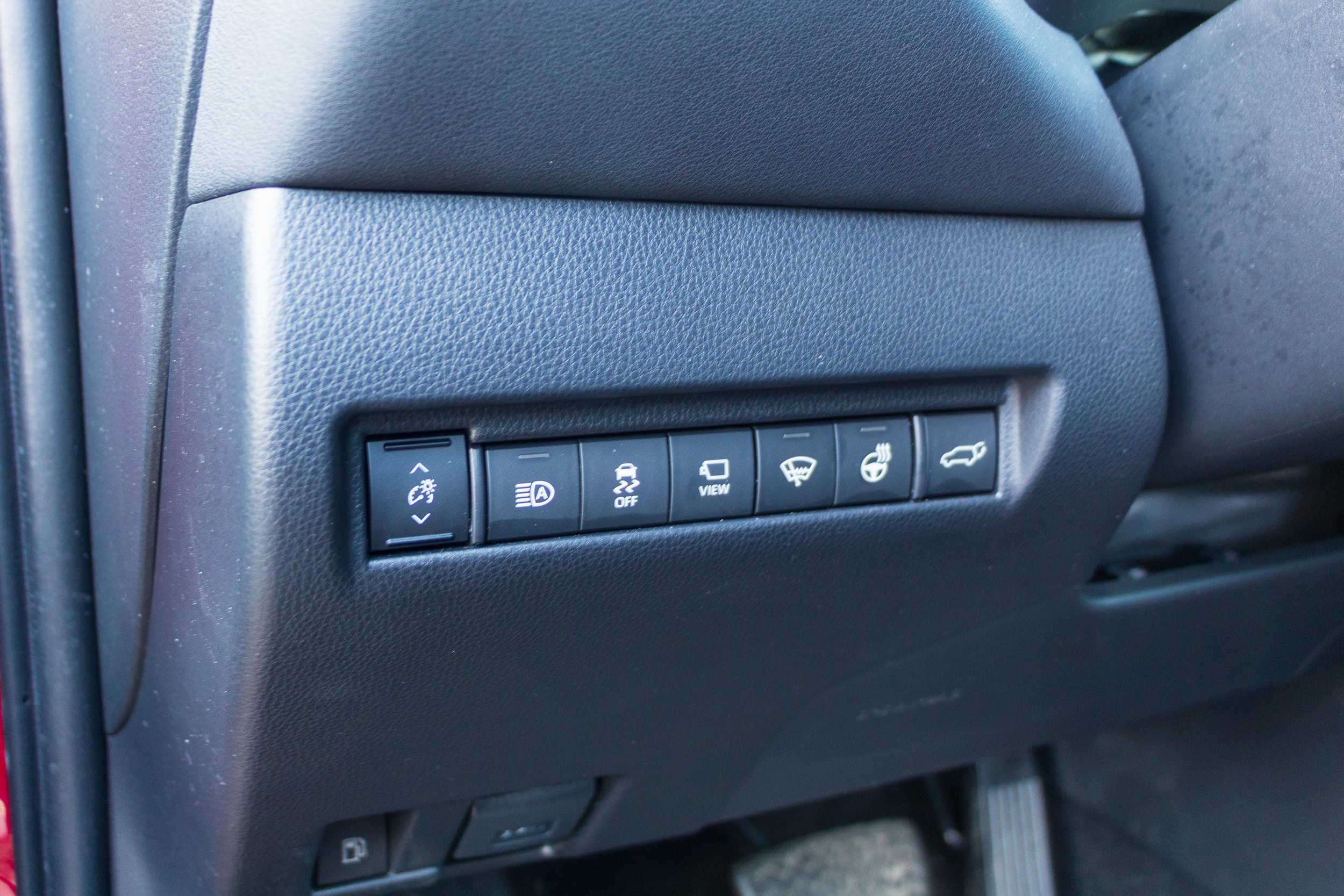 Toyota has gone with capacitive touch buttons to control the volume and tuning on the sleek center stack. I’m not generally a fan of those, but they do, however, look good. In a high-style model like this one, matching the upscale interior might be more important.

Remarkably Upmarket — If You Fit 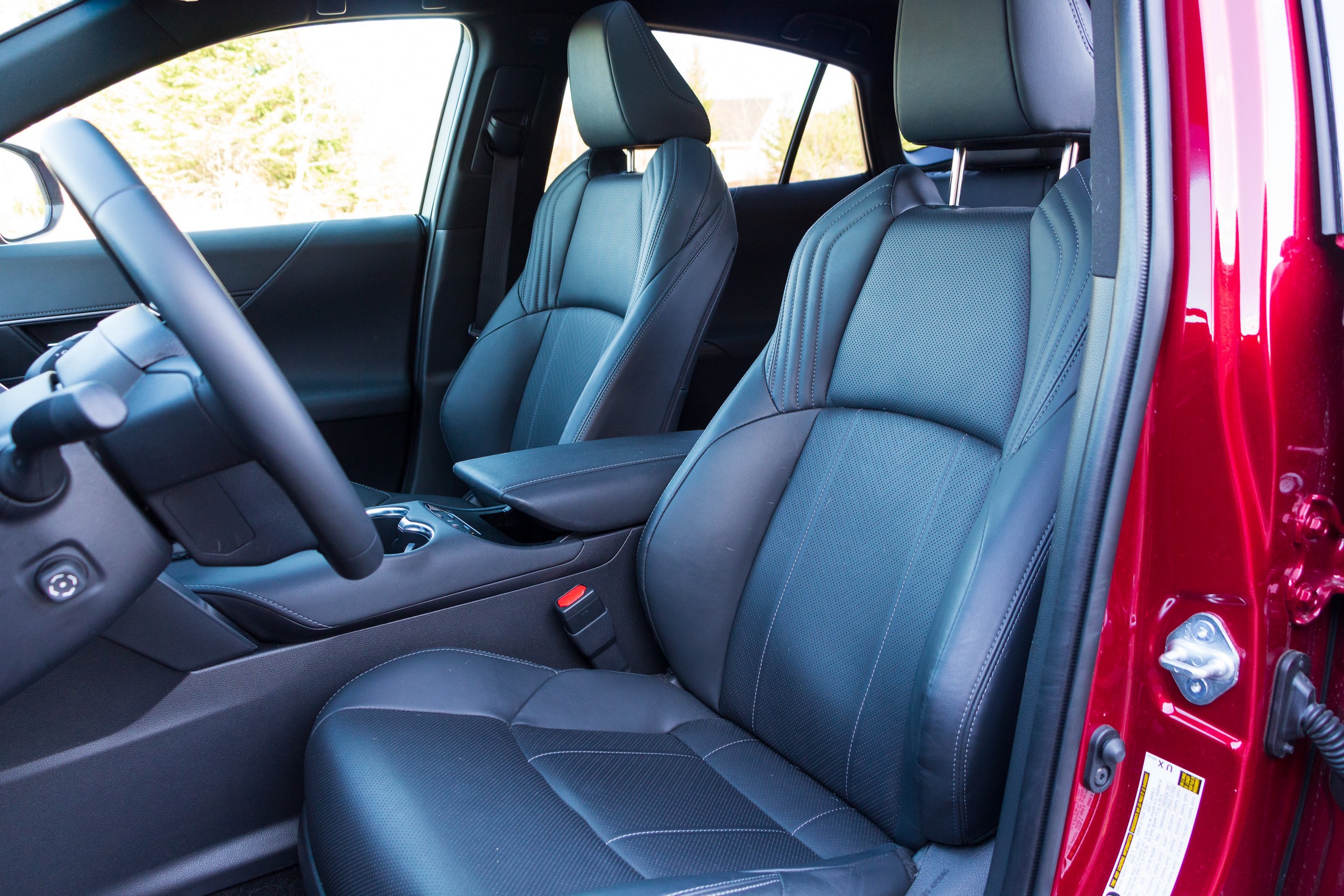 If you do fit in the Venza’s cabin, you’ll find a nicely appointed and well-trimmed interior. It’s as nice as anything Lexus puts in an RX (and nicer than the NX or UX), and it felt like a bargain for what features are included.

Inside, you get side-by-side cupholders on a faux-leather-trimmed center console, SofTex fake leather trimming, and available contrast piping on the door panels and the dash. And it’s all quite comfortable, exactly what a personal luxury car needs to be. The vent designs, dash, and steering wheel are standard Toyota, but everything else is unique to Venza. 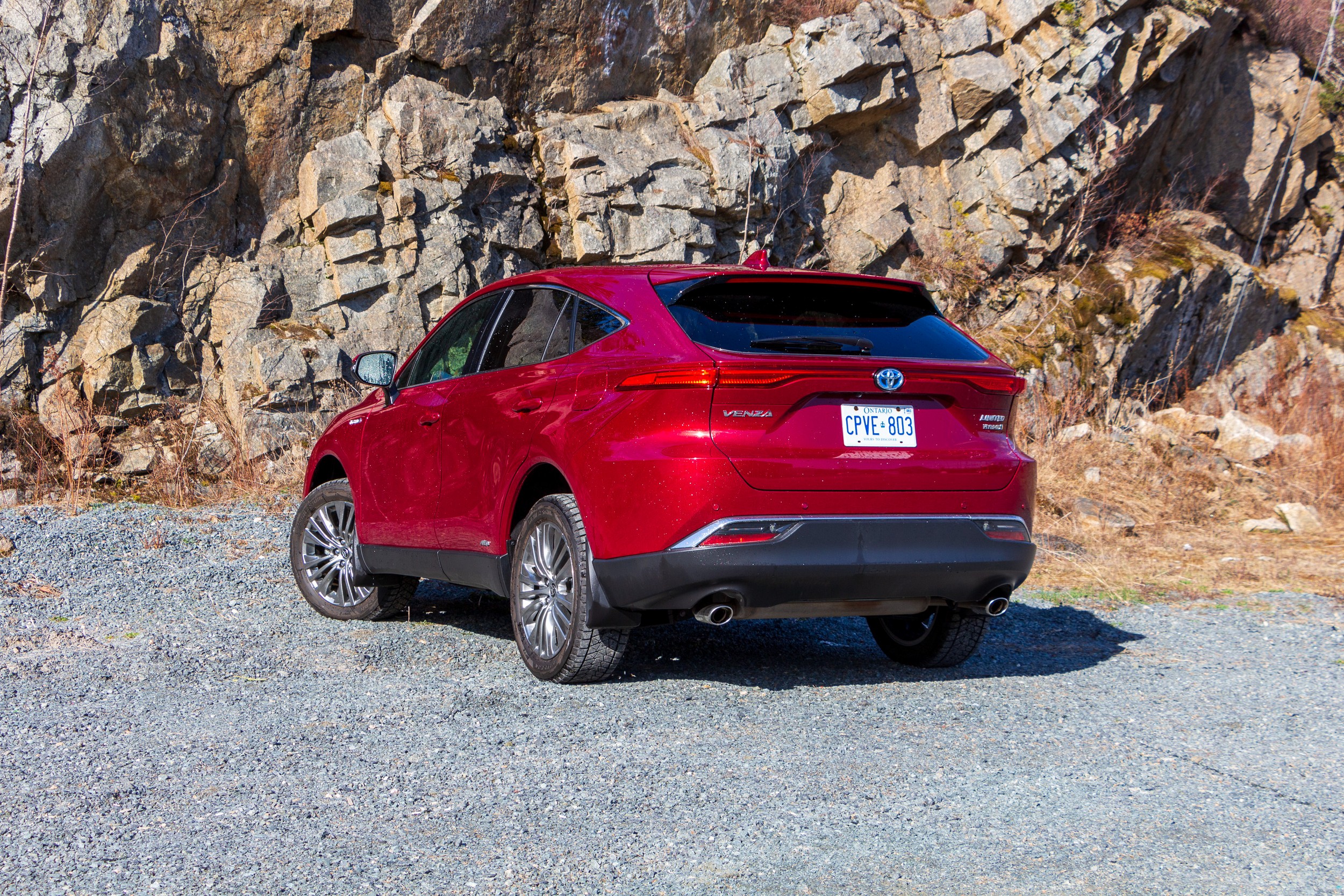 The 2021 Toyota Venza also offers a party trick. The Star Gaze fixed panoramic roof which has frost control. This massive pane of electro-chromatic glass flips from frosted to nearly clear (and back) almost instantly at the push of a button.

It works well, letting in more light all of the time (there is a power shade for the hottest days) and giving you a look at the sky when you want one. It’s a cool piece, though I wish that Toyota had shown more confidence in the feature and left out the shade to allow for more headroom. And set the roof to remember your settings, so you didn’t have to turn it back to clear each time you restart the Venza.

Lastly, this is a Toyota, so it comes loaded with driver assistance features. Toyota Safety Sense 2.0, which isn’t the latest version of the system, does have pre-collision with pedestrian detection, lane departure alert, auto high beams, and full-speed radar cruise. Blind-spot monitoring is also standard, but only the XLE and Limited trim get front and rear parking assist.

2021 Toyota Venza: A Lot to Like in an Affordable Package

As a replacement for the Solara, the 2021 Toyota Venza has done a heck of a job. It’s more comfortable, more luxurious, and has its finger firmly on the pulse of what buyers of mid-price, gratuitous cars want in 2021. If only Toyota had built a convertible to accompany it.

The Venza is stylish and more luxurious than it has any right to be at this price point, with the base LE starting at $32,570 and the Limited setting you back $39,900. However, there are still a few downsides to this mid-size crossover as Toyota has fallen behind in infotainment, the use of space, and, particularly in the Venza, refinement.

If exterior style, the cabin fit, and the Toyota brand are enough for you, the 2021 Toyota Venza is a great choice. If not, there are similarly fashionable crossovers from Mazda, Buick, and even Mercedes-Benz that may be calling your name.

Build your own 2021 Toyota Venza at Toyota.com


Impressive New Car Deals During The Pandemic
All The 2022 Manual Transmission Cars
The Most Reliable SUVs in America (and the Worst, too)
REVIEWED: Winter Nitto Exo Grapplers and Summer Nitto Ridge ...
10 Expensive SUVs Worth Their Price Tag (And 5 That Aren’t)
Lucky8 Proud Rhino Defender 2: First New Land Rover Defender...