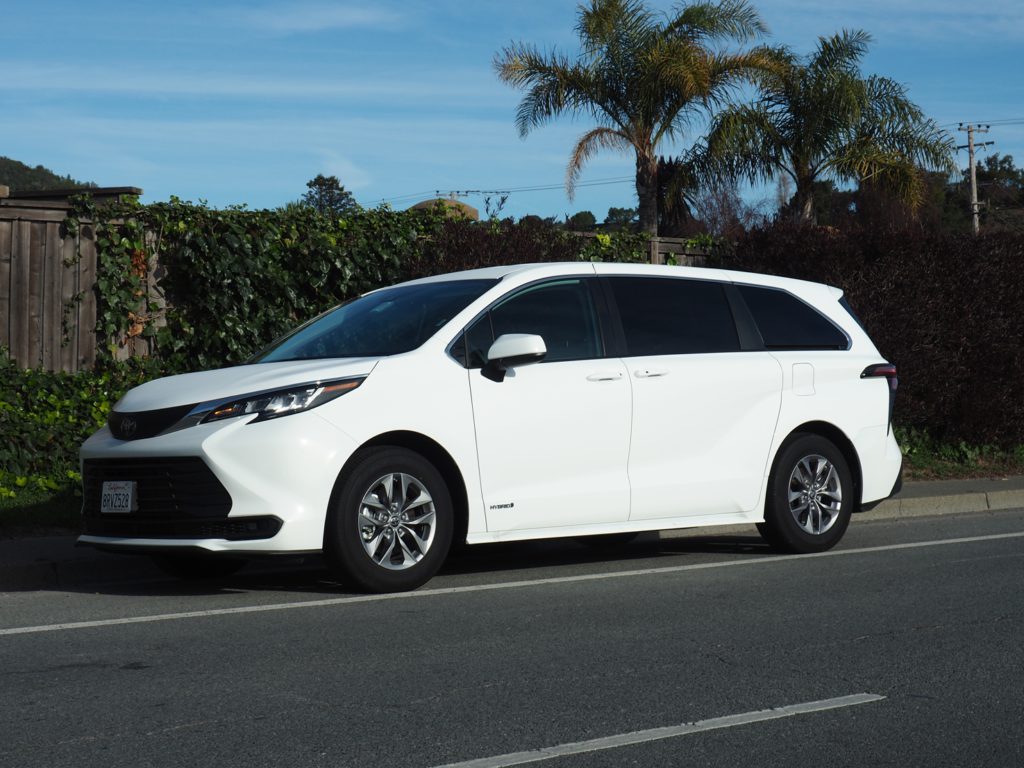 The new fourth-generation 2021 Toyota Sienna minivan comes in five trim levels, and all five come with the same drive train, including a hybrid battery storage system. But will this minivan satisfy demanding families seeking room and cargo space galore? I got my hands on a new 2021 LE base model to find out and was surprised at the van‘s space and style. 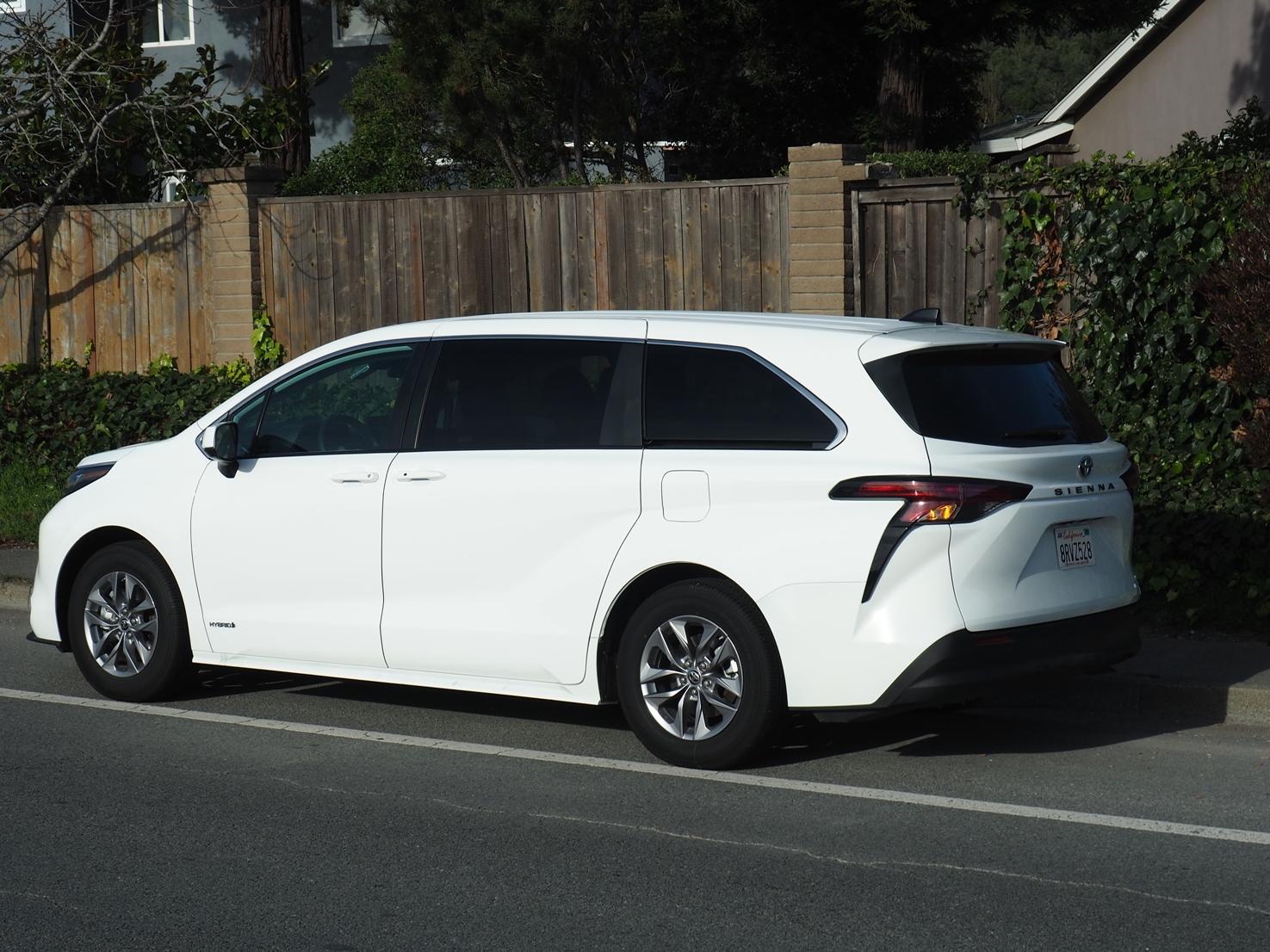 The Toyota Sienna minivan, produced in Indiana, first debuted in 1998. Toyota is now on the fourth-generation of the Sienna, and with the 2021 model, you would figure they know what the consumer wants. For the 2021 Toyota Sienna, the styling is sleeker inside and out, with a modern, crisp feel. It uses the same platform as Toyota’s Camry and Avalon, so you might expect a car-like ride, and the Sienna doesn’t disappoint in that regard. 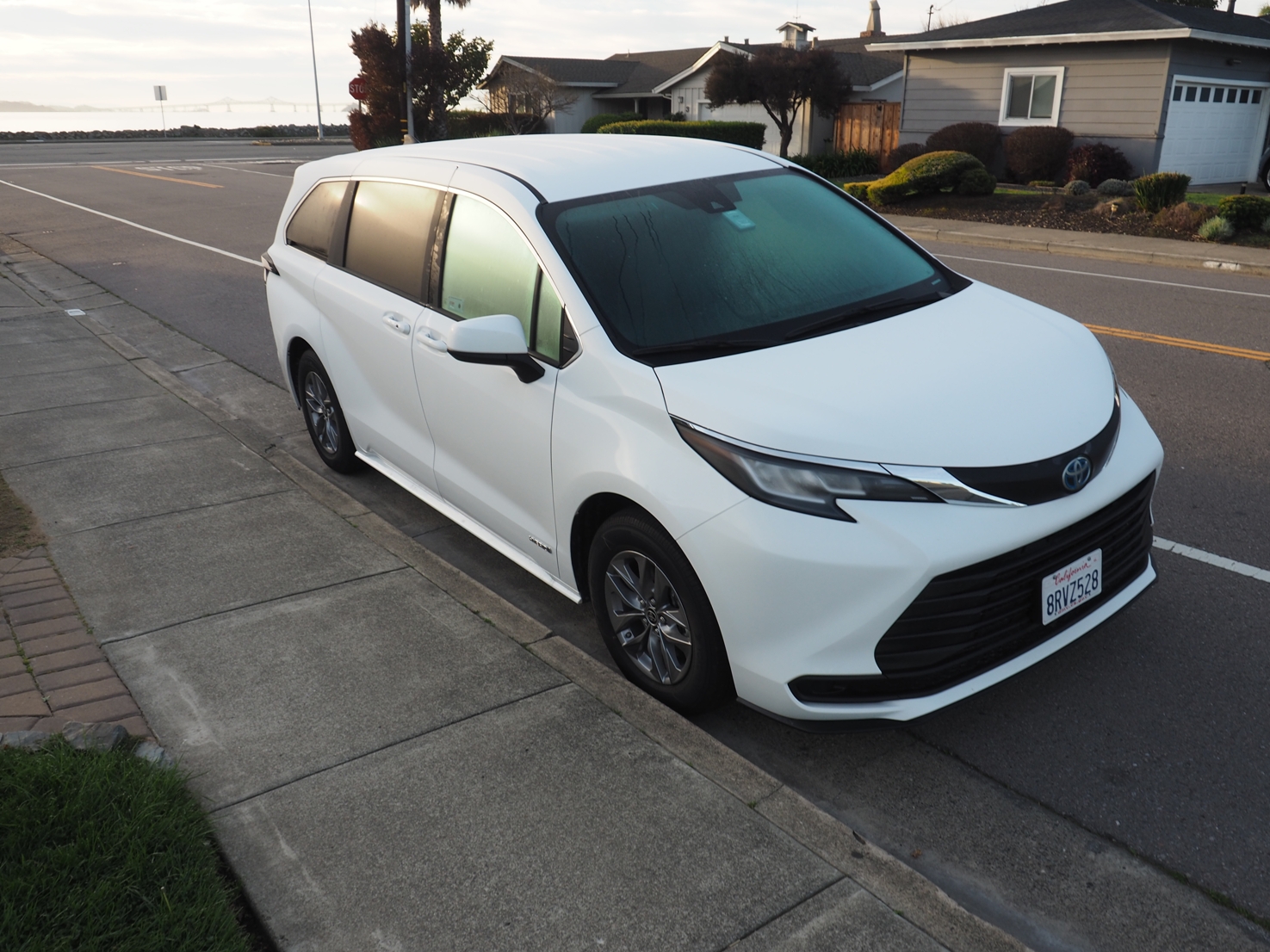 The Sienna comes in five packages which, as usual, build on the lower-priced version. Toyota starts with the LE, followed by the XLE and XSE. Then they add on the Limited and Platinum versions. Each version offers you the option of at least one package of additional upgraded options to the standard unit. Only the base LE unit comes standard with room for eight (in a squeeze). The XLE comes with a choice of eight or seven passengers, and the rest of the models only offer room for seven. 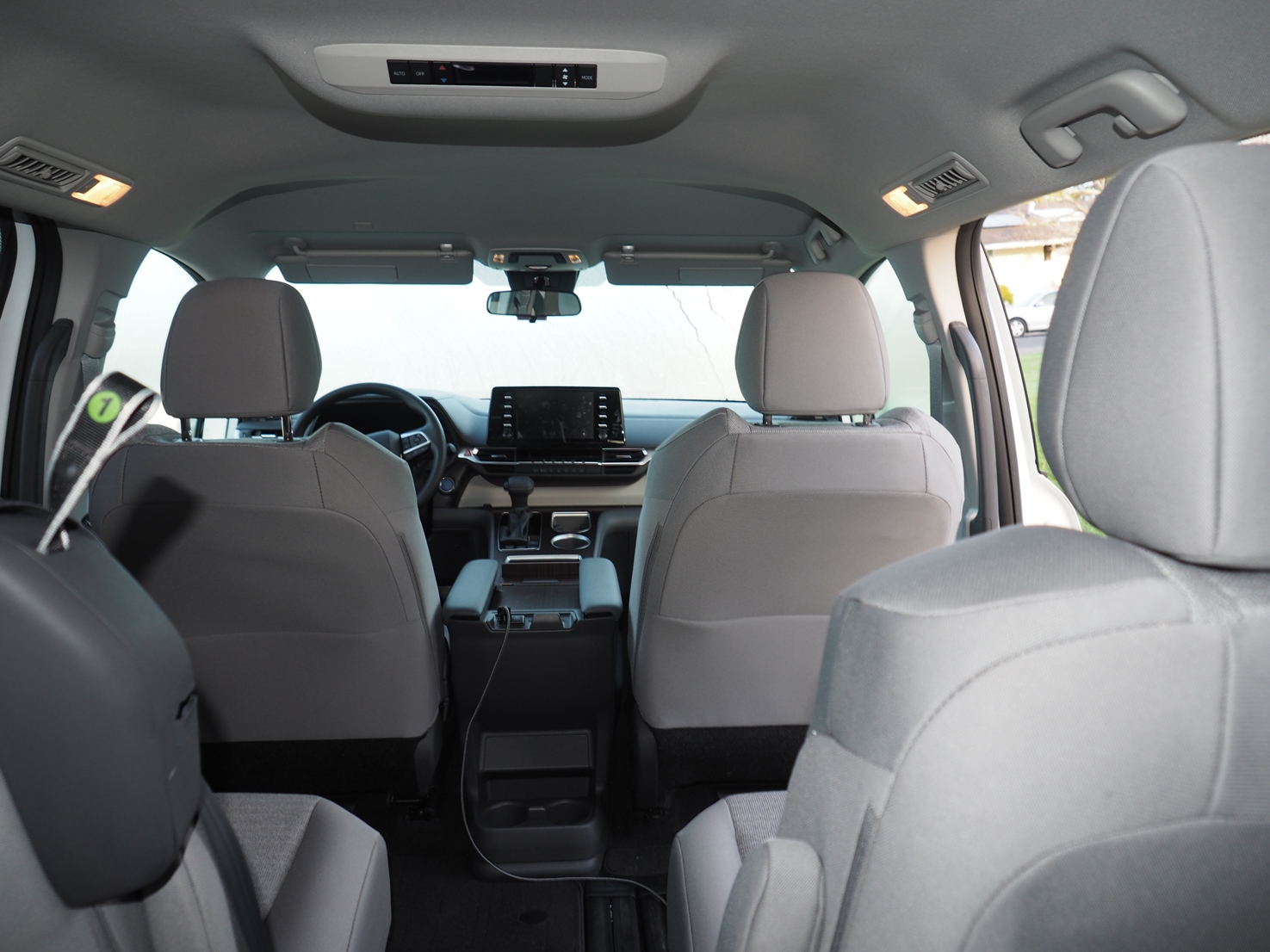 All the Sienna models offer 162.5 cubic feet of passenger room, with cargo space behind the two front bucket seats measuring a minimal 101 cubic feet.  Since the space behind the third seat is deep to allow the seats to stow away, there is a surprising amount of room for luggage, groceries, and essentials in the area which is configured at 33.5 cubic feet. On one excursion, we easily packed in a full-size stroller, bicycle, helmet, two bags, coats, and toys in the back. 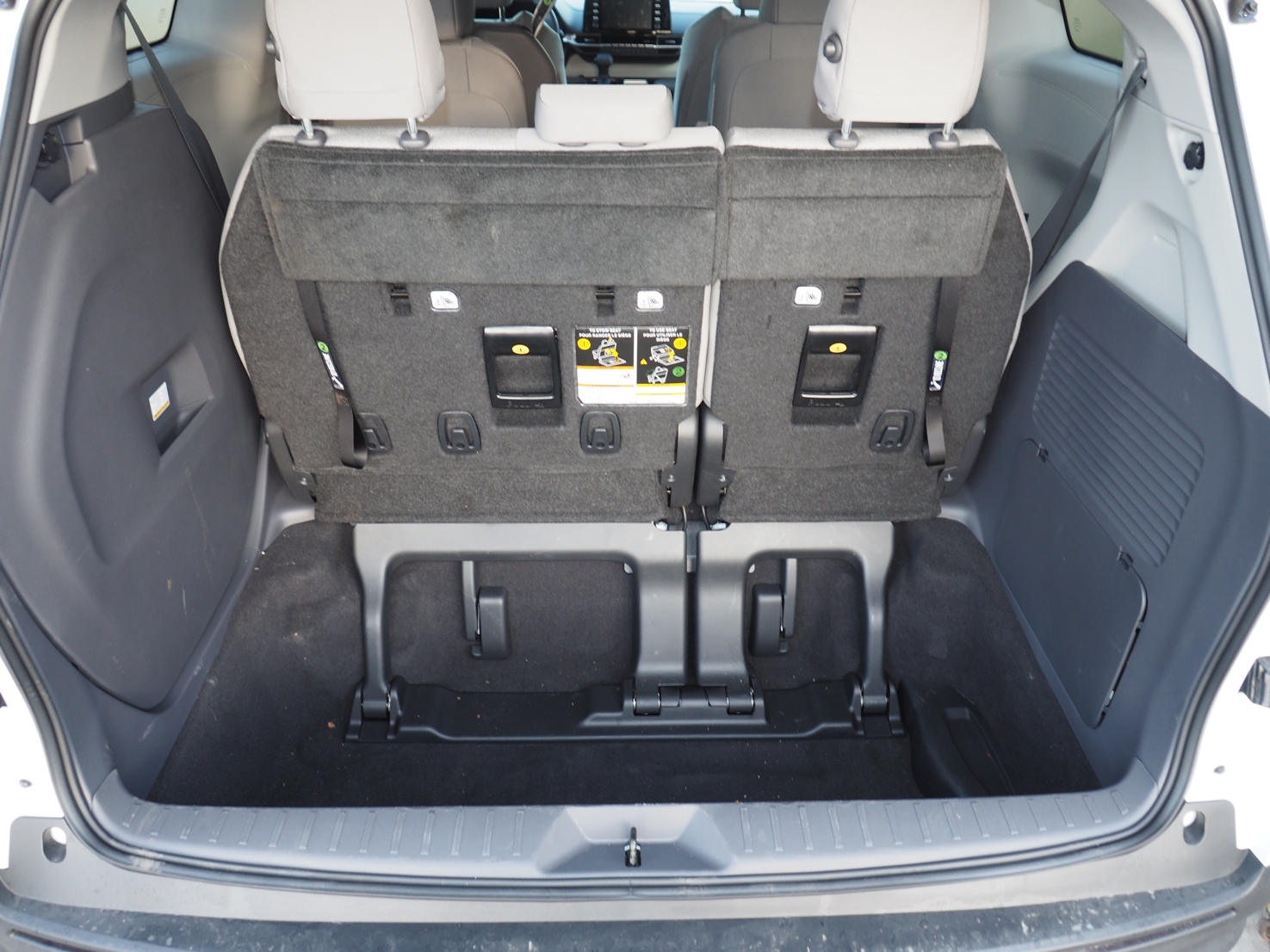 The second row of seats offers a narrow middle seat that can be removed. With that seat removed, you end up with a few more cup holders and an easy pathway for little ones to get to the rear bench seat. Or for the adults, the two end seats tilt down and slide forward to allow for easier access to the third-row seating. But these middle row seats can not be removed or stowed under the floor, so they are going to hinder your storage if you expected more cargo room and fewer seats. 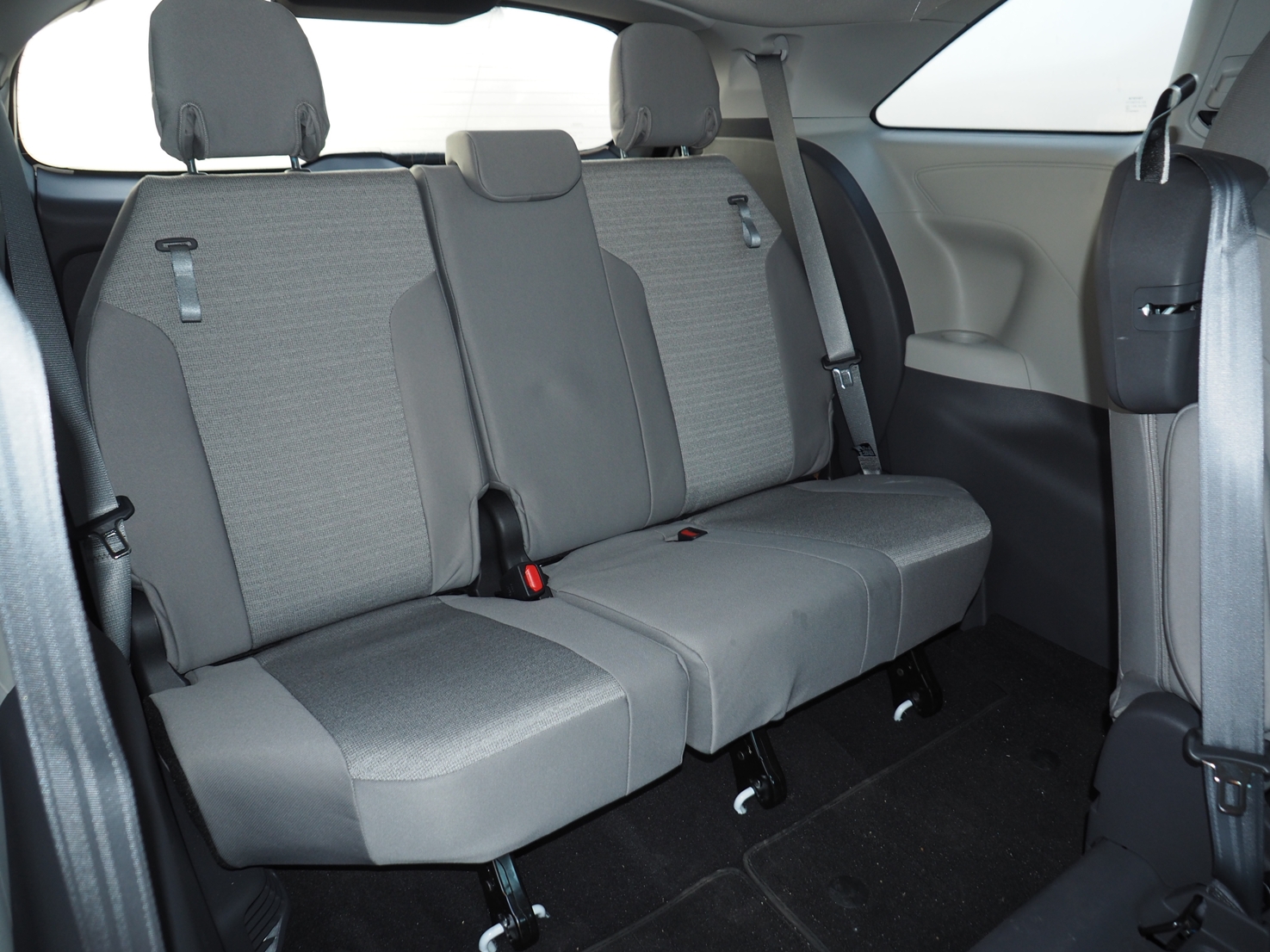 Since you can expect to have at least one child carrier seat in a minivan, it was nice to see the LATCH supports for these seats were easy to find and snap into. We were able to easily accommodate two children in car seats and four adults. The two power sliding doors allowed for easy entrance to and exit from the van.  The base model offered no power for the liftgate, but it was easy enough to lift and close. 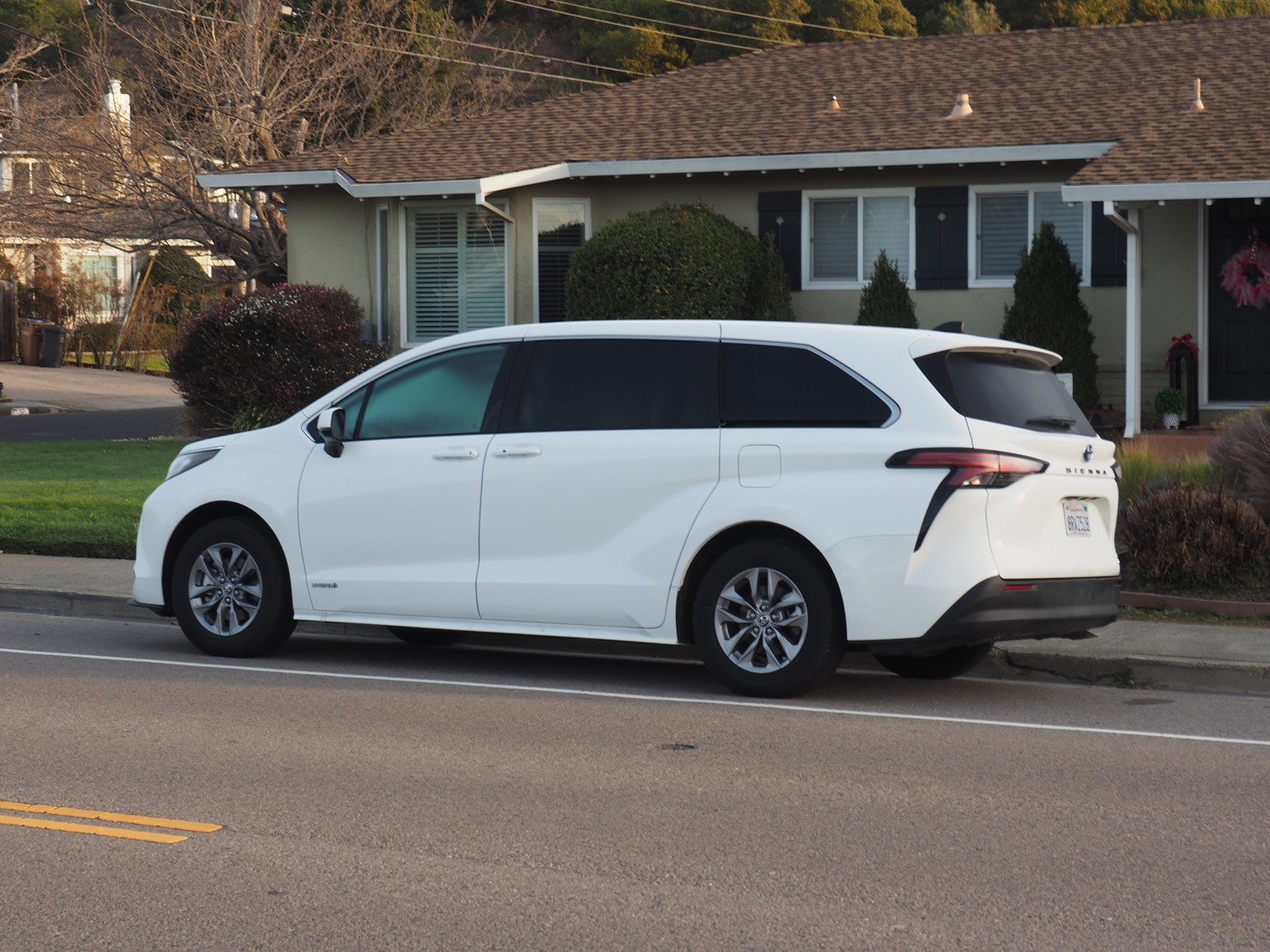 All Sienna models come with a 2.5L four-cylinder hybrid engine producing 245 hp. With this hybrid engine, you expect good gas mileage, and the Sienna delivers. The EPA estimate is 36 mpg for the front-wheel-drive Sienna, while the all-wheel-drive version loses a mile, coming in at 35 mpg.

Most conventional minivans can’t get even 20 mpg in the city, and their highway mileage won’t break 30 mpg. The EPA gives the competing Honda Odyssey a combined driving estimate of 22 mpg. So if the family mover went 15,000 miles each year, you would go through 681 gallons of go-go juice in the Honda. On the other hand, the Toyota Sienna, at 36 mpg, would go through only 416 gallons, or 265 fewer gallons of gasoline, each year.

On my first two days of driving the van, the fuel gauge hardly moved despite driving over 100 miles. With the 18-gallon fuel tank, you should have a range of about 648 miles if you like to ignore the low fuel warnings.

Like many hybrids, this minivan comes with a screen showing when the engine is charging the battery and when you are driving solely with the battery power. Toyota warranties the hybrid battery for 10 years or 150,000 miles. 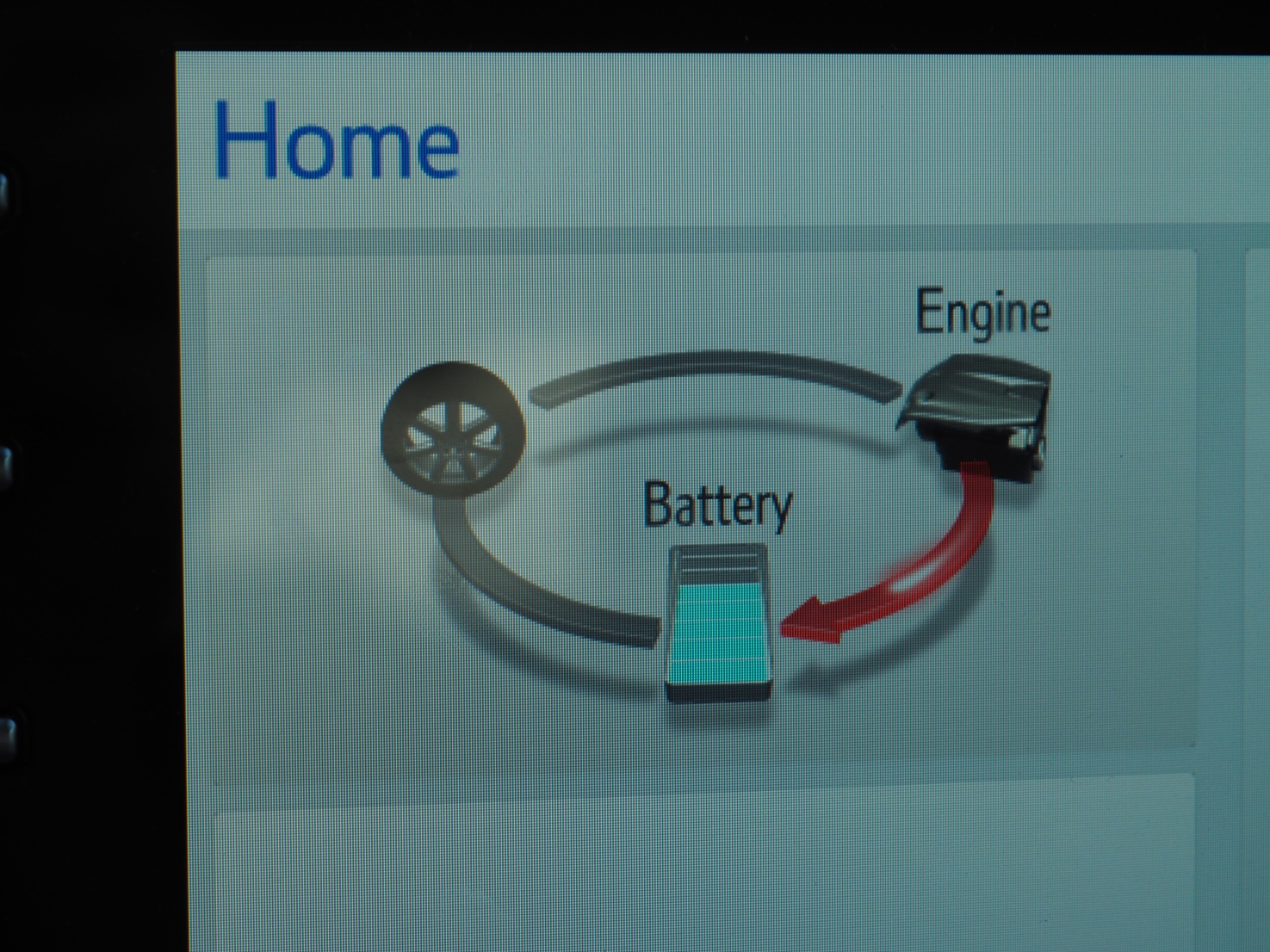 With this engine coupled to a continuous variable transmission (CVT), the Sienna easily reached highway speeds and moved sprightly along. You will hear noticeable engine noise, but it was never too loud or obnoxious. Though it certainly won’t be confused with a rocket ship, the minivan certainly can move when needed. 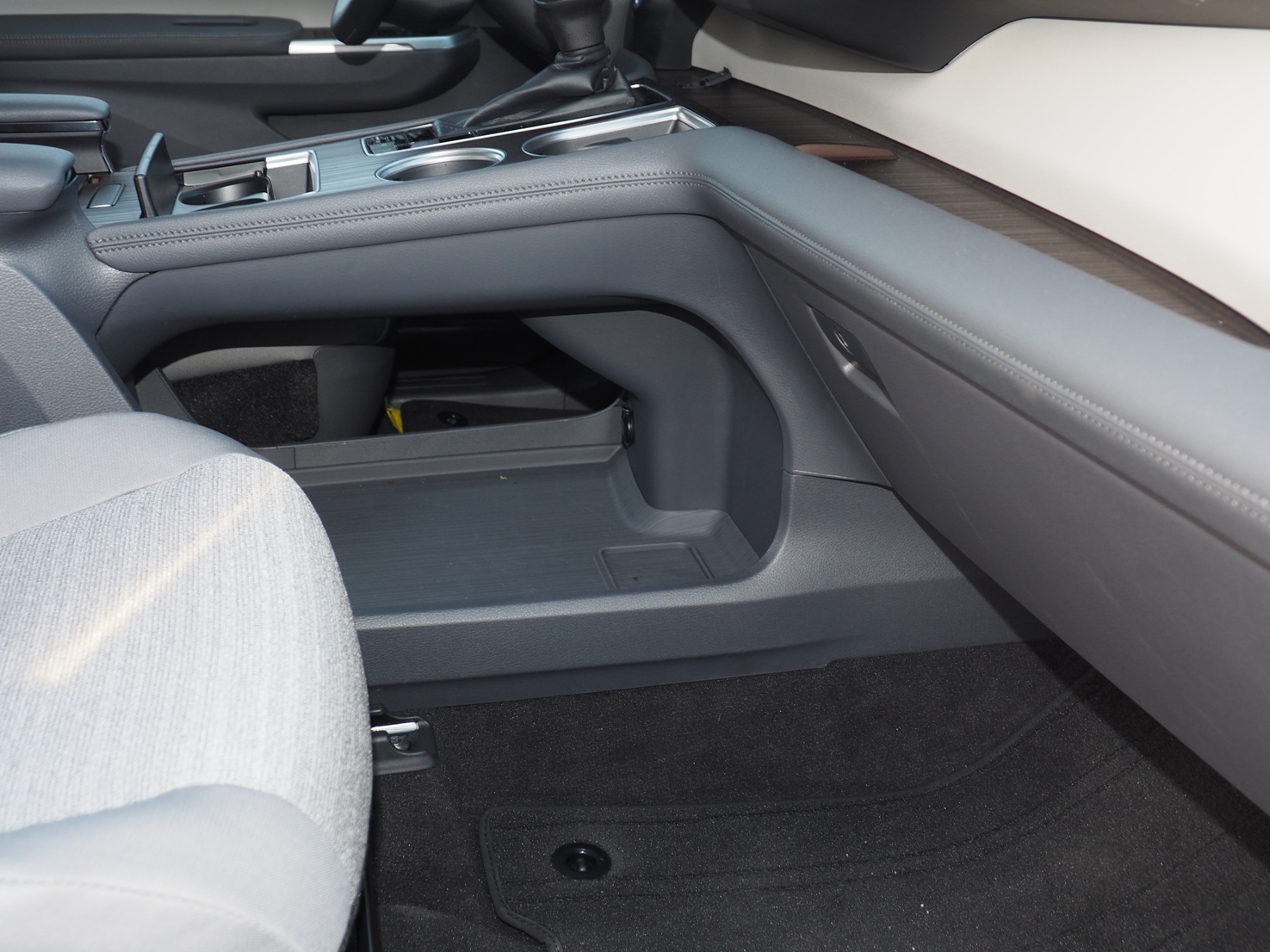 Keep in mind, I tested a base LE model so there is room for some upgrades as you move up the chain. But even for an inexpensive starter minivan, there was a surprising amount of interior amenities included. For starters, how about eighteen cup holders!

Additionally, the LE has a total of seven USB ports, although the ones for the last row were only on the right-hand side. Something tells me “little Johnny” is going to complain that his brother’s cord is touching him. Come on Toyota, couldn’t you wire some USBs on both sides of the cabin?

It also comes with a 12-volt power outlet, which used to be called a cigarette plug back in the day. To keep the sun off the little ones, the second-row windows have pull-down sunshades. And, the front center console has a couple of deep pockets suitable for storing a phone while connected to the van.

Sienna Safety Features: All The Basics Plus Some 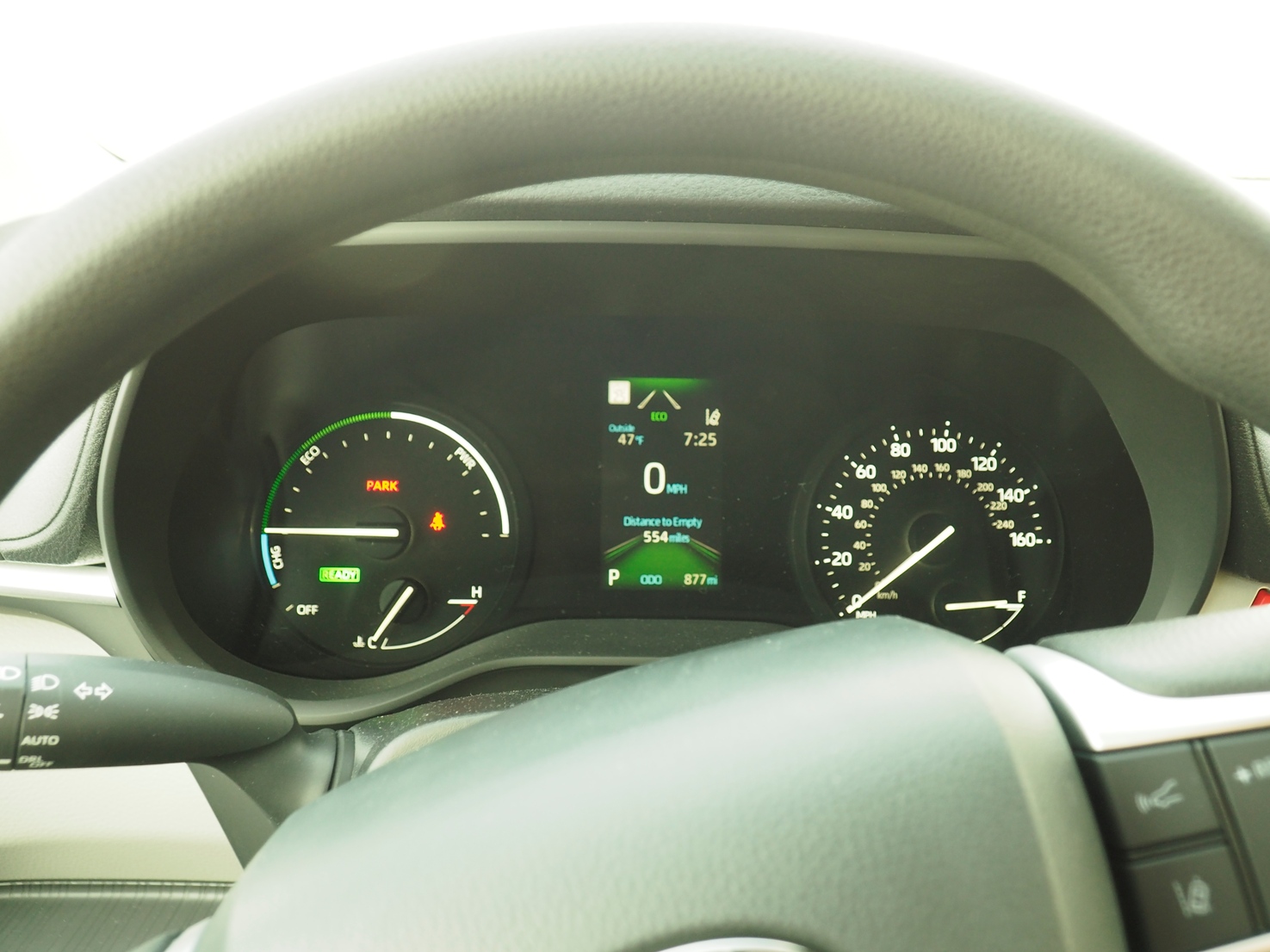 Whether you like the “nanny” features or not, they serve a function, and the 2021 Toyota Sienna comes with some great, basic safety features, including:

Since the van was new to me, the wheel vibration and a soft tone warned me when I strayed too far from the center of my lane. Some of these ADAS (Advanced Driver Assistance Systems) features would come in handy as the sightlines out the rear window/mirror are limited by all those headrests and wide “C” pillars.

The Sienna comes with a center-mounted 9-inch touchscreen that has various built-in apps and is compatible with Android (finally) and Apple phones with an Alexa smartphone connection option. I had no issues using Waze and other apps from my older Apple iPhone. The layout and buttons were easy to read and intuitive to use, with no need to consult the owner’s manual. In the front gauge pod, you also get a 4.2-inch screen with a rotating menu of info screens. 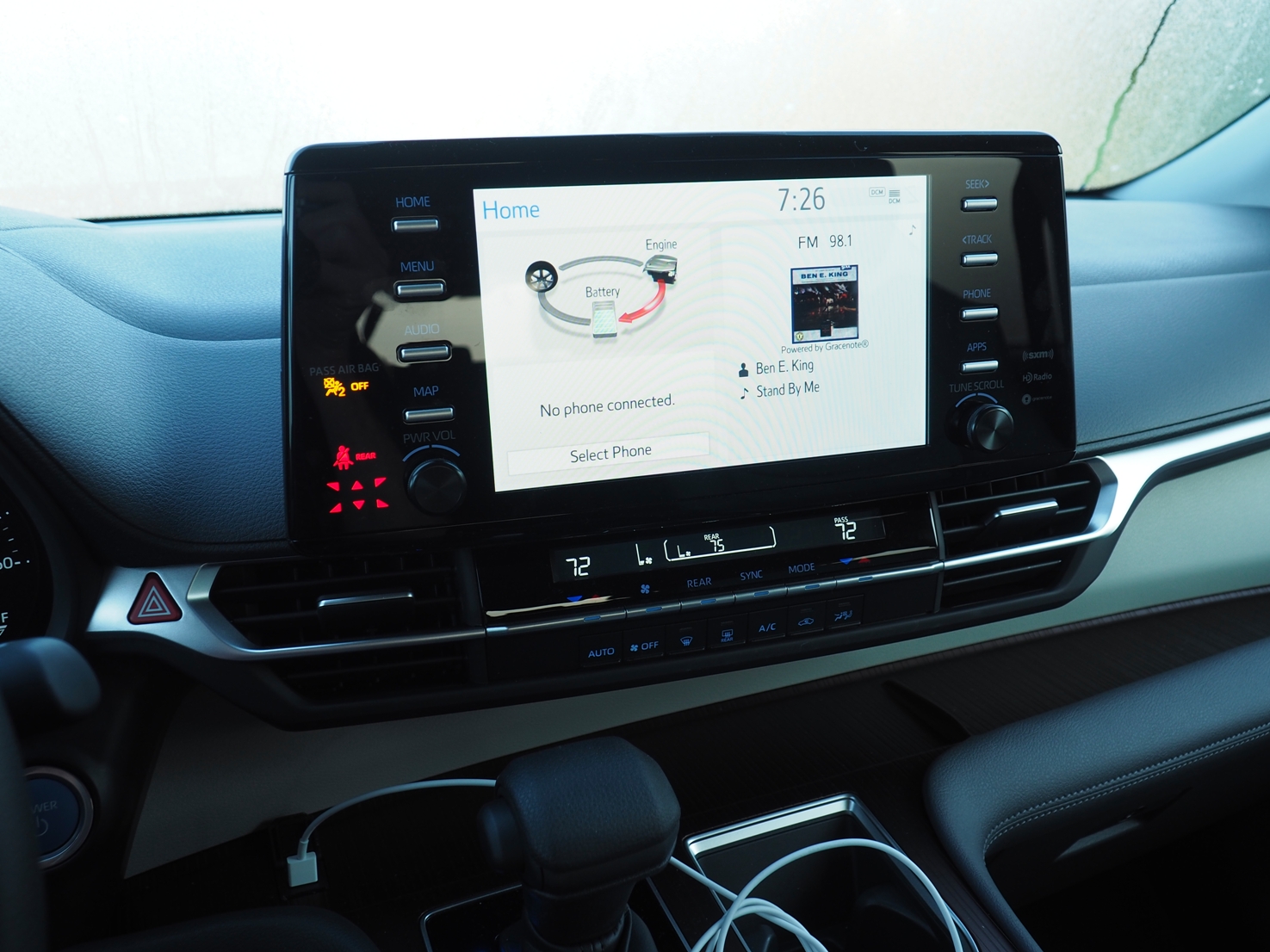 Toyota offers the standard 3-years or 36,000 miles front-to-rear warranty for the Sienna. The power train is covered for 5-years or 60,000 miles. Toyotas have a tradition of being reliable transporters, and I would be shocked if the 2021 Toyota Sienna proved to be any different.

The base LE model with the no-frills treatment comes in at $34,460, which is substantially more than the competition, but that hybrid engine combo can make up for the price difference pretty quickly. The previous 2020 Sienna started at $31,640, so the new generation model starts at less than $3,000 more than last year’s model, which had a gas-guzzling 296 hp V6. Bump up the options and trim levels, and you will hover near $50,000 for a fully optioned 2021 Toyota Sienna.

Dropping Off The Keys

Overall, the 2021 Toyota Sienna was impressive. The hybrid engine is a fuel saver with hardly any noticeable decline in performance. The roomy interior and flexible seating were a plus. If that middle row of seats could magically disappear the functionality of this minivan would be improved. Additionally, the safety features are high-tech and may cause the competition to rethink their offerings. Though Toyota has never led in sales over their minivan competitors, some boost in sales will likely occur as the word about the Sienna gets out. By adding a hybrid engine to a popular minivan model, the 2021 Toyota Sienna looks to be a winner.


The Mazda BT-50 Is Redesigned But US Customers Will Not Get ...
What Happened to the Jeep Comanche?
The Best Of 2021 Jeep
2021 Cadillac Escalade ESV Review: All the Size and Amenitie...
Best 2019 New Cars
Extremely Rare and Cool Special Edition Packages and Limited...