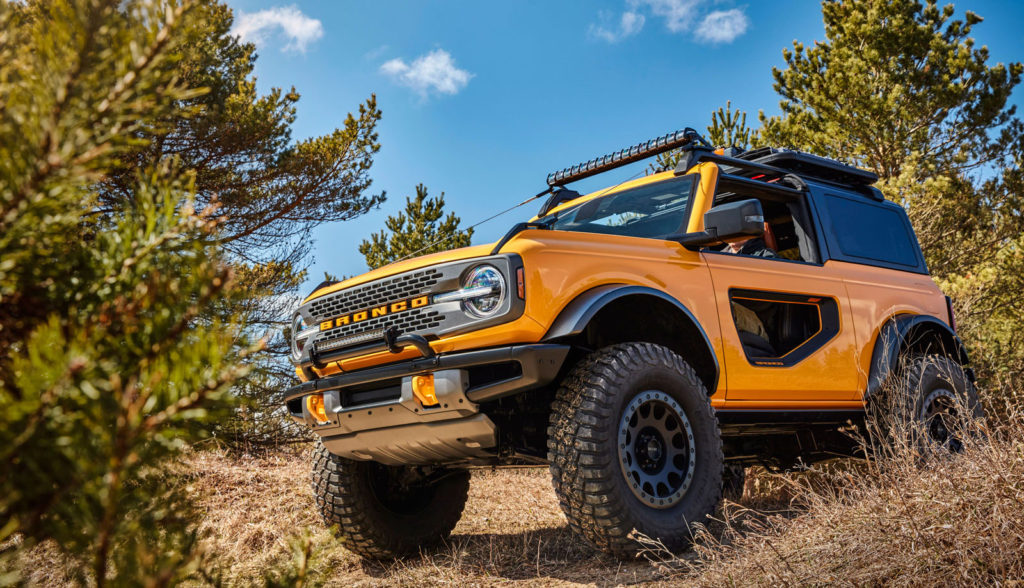 Does the long-awaited return of the Ford Bronco suggest that 2-door SUVs could make a comeback? Given the history of this niche configuration in the U.S., it appears unlikely. Even with the Bronco, Ford is hedging by also making it available as a 4-door for the first time.

The current lack of 2-door SUVs at American dealerships is not necessarily down to any shortcomings of the vehicles themselves. Indeed, some of these rugged models – notably the Jeep Wrangler, original Bronco, and Chevrolet Blazer – enjoyed long runs as serious sellers. Rather, it’s drivers that changed. Our needs in an SUV have changed, and our expectations of an SUV have changed. 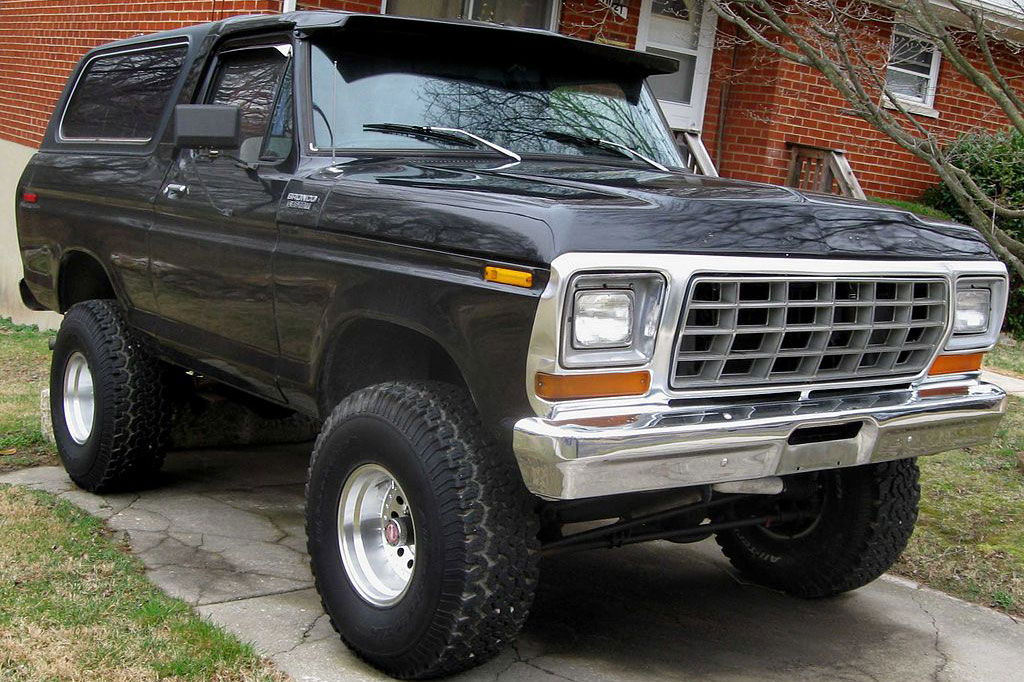 But could American consumers’ tastes for 2-door SUVs swing back again? While we eagerly await the arrival of the 2021 Bronco (which can be reserved now), we took a roughly chronological look at some past 2-doors. What lessons do these hold for their sub-class?

There was a time when 2-door SUVs were not only somewhat popular but also big. These began with the International Harvester Scout, debatably America’s first SUV. Debuted in 1961 as a competitor to the Jeep, the full-size Scout was as Spartan as it was rugged. It survived two generations, spanning nearly 20 years.

Then, partially inspired by the Scout, came Ford’s original Bronco. This burly workhorse was produced for five generations, from 1965 through 1996. The ostensibly similar Chevrolet K5 Blazer joined in the large 2-door fun in 1969, going toe-to-toe with the Bronco through 1994. 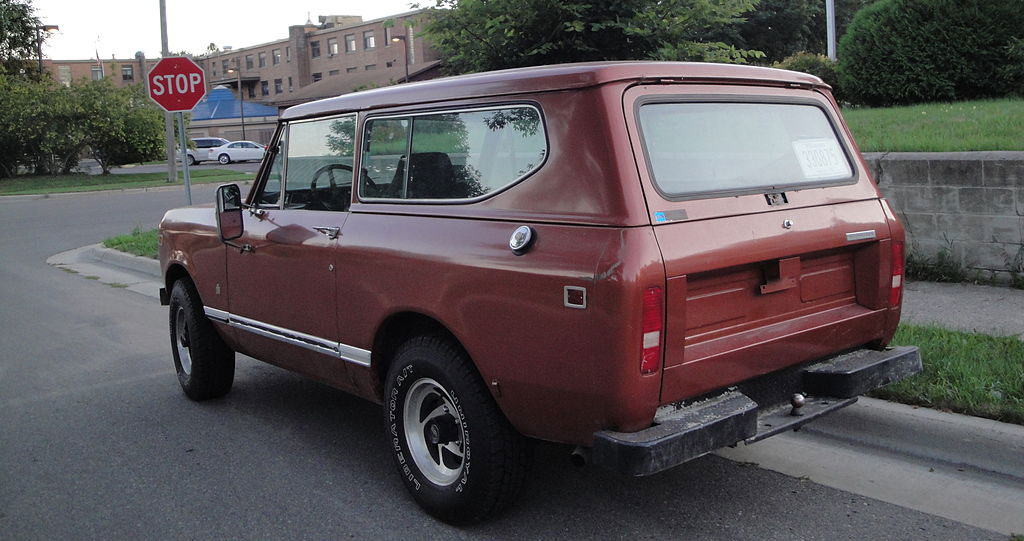 Not wanting to miss out on the segment, Dodge produced its own full-size 2-door SUV called the Ramcharger from 1974 to 1993. For the first seven of those years, there was also a Plymouth version available, the Trail Duster (Plymouth’s only-ever SUV).

How could these large, usually V8-powered sport utilities survive for so long? It seems there were multiple factors. Firstly, gas was a lot cheaper when these models first appeared. Most of them debuted, or at least began development, before the 1973 oil crisis.

Additionally, these big 2-doors appeared before 4WD and AWD became commonplace even in sedans and wagons. Today, around half the vehicles sold in America come equipped with one of these systems. But in decades past, a driver who regularly encountered snow and/or dirt roads had much more limited options. 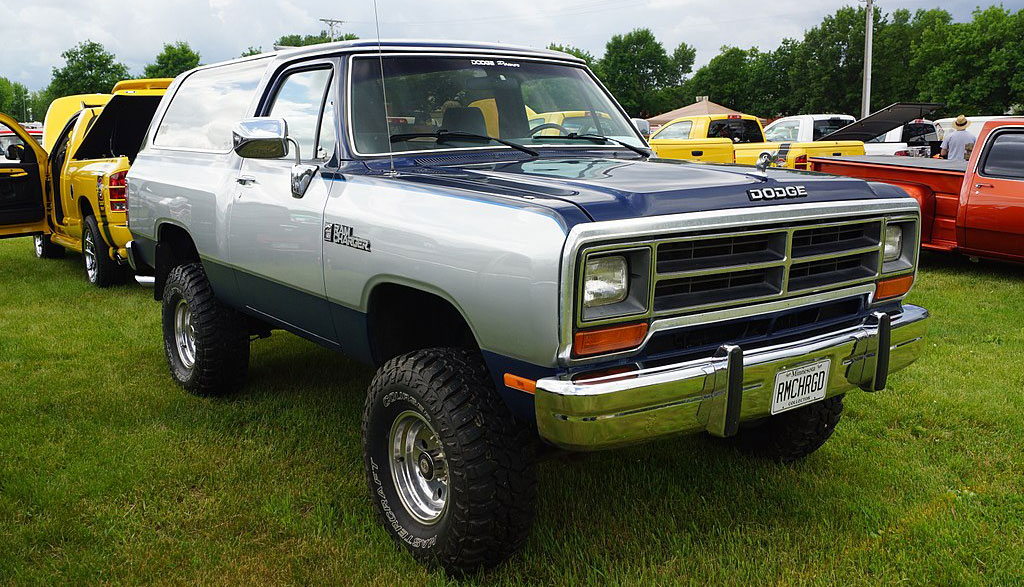 Furthermore, our expectations of an SUV have simply shifted. When the sport utilities listed above first appeared, it wasn’t considered cruel and unusual punishment for passengers, especially children, to have to clamber into a rear seat through front doors. That simply wasn’t a big deal and therefore wasn’t a deal-breaker when designing or purchasing a vehicle. As convenience gradually became a near obsession among consumers, 2-door family vehicles were one of its first victims. SUVs certainly didn’t get any smaller overnight, but they generally started having more doors. The days of the big 2-door SUVs were numbered.

Before they started adding doors to their popular SUVs, both Ford and General Motors simply shrunk their 2-door models to make them less gas-guzzly and a little more parking-friendly for urban owners.

The downsized Chevrolet S-10 Blazer and its rebadged GMC Jimmy variant first appeared as 1983 models. But by the 1991 year-model, these were also being offered as 4-doors, as were 2nd-gen Blazers (1995-2005). (For the second generation, the “S-10” prefix was dropped, as the original 2-door Blazer was now gone altogether.)

Whereas the Blazer enjoyed a long production run by also embracing 4-door configurations, Ford’s compact Bronco II stubbornly stayed as a 2-door only and paid the price. Introduced as a 1984 model, it was gone by 1990, in part due to safety concerns related to its stability. One in 500 Bronco IIs was involved in a fatal rollover, and GEICO even stopped insuring Bronco IIs in the 1990s.

Ironically, the Bronco II was outlived by the original, full-size Bronco. Ford has never again produced a compact 2–door SUV. 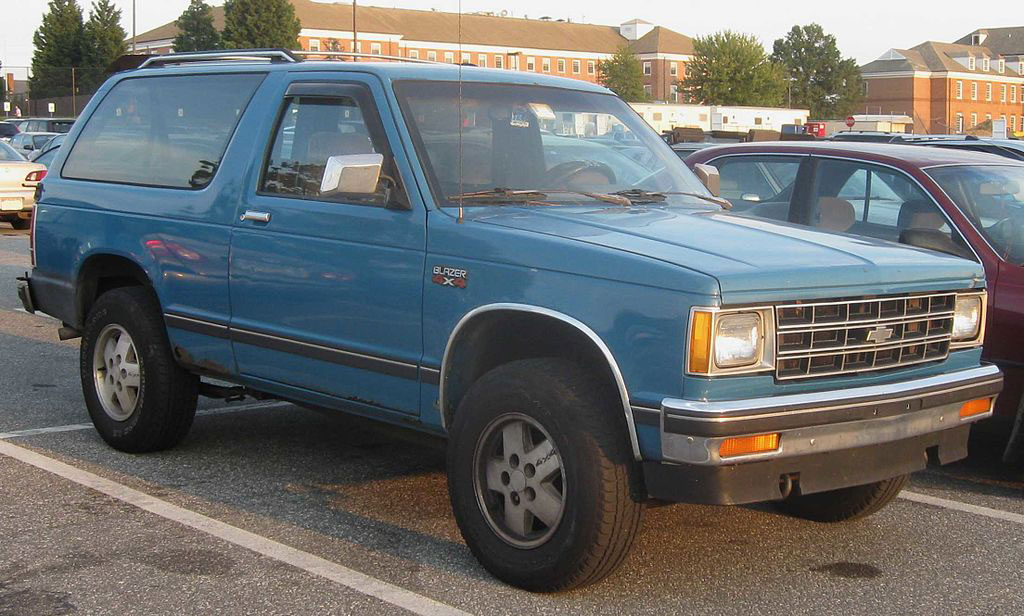 The Mitsubishi Montero was initially introduced in 1982 as a short-wheelbase 2-door SUV. An ultra-boxy, almost novelty car, it was – like most small 2-door SUVs – aimed at single people and young couples A genuinely capable 4×4 off-roader, available with a canvas or metal top, it appealed to drivers in love with the outdoors – and without kids.

But within nine months of its arrival, the 2-door Montero was joined by a long-wheelbase 5-door model which would become its staple incarnation. The super-cute 2-door was dropped from the Montero’s 2nd-gen line-up, beginning in 1991. Its rebadged Dodge version, the Raider, suffered an even shorter lifespan (1987-1989). 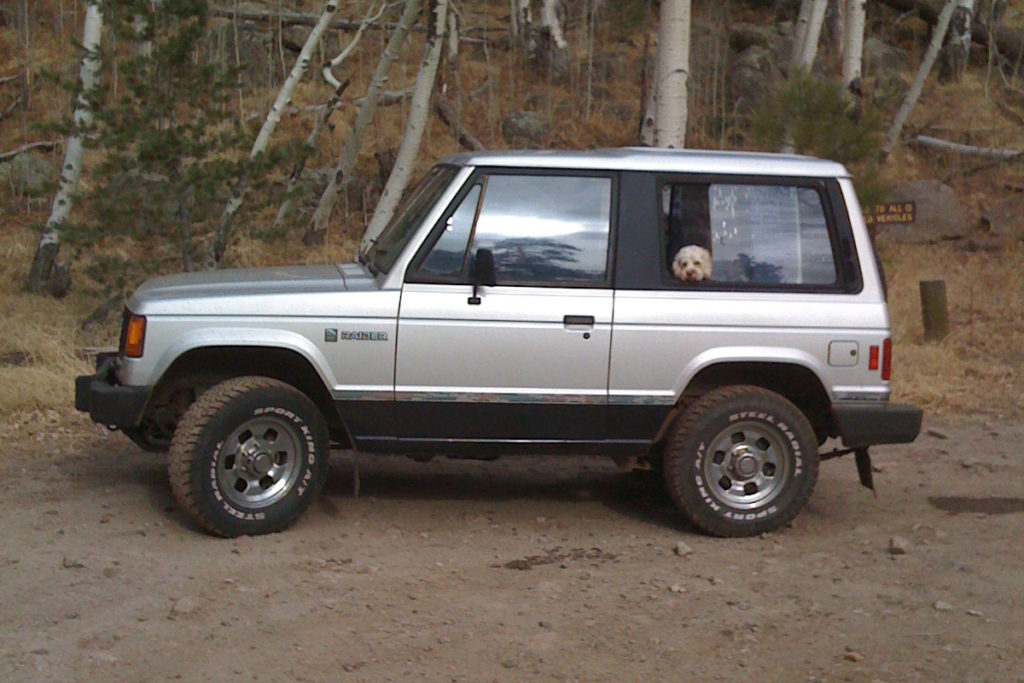 The original Montero perhaps personifies a type of 2-SUV that will likely never return to the American market (fellow Japanese automakers Suzuki and Daihatsu made similar models). It sold at a time when young drivers didn’t expect every mod con at their fingertips in a vehicle – or at least were prepared to trade a few creature comforts for the option of off-roading thrills. While its interior appears crude today, the Montero 2-door delivers a visceral driving experience long gone from most contemporary SUVs. 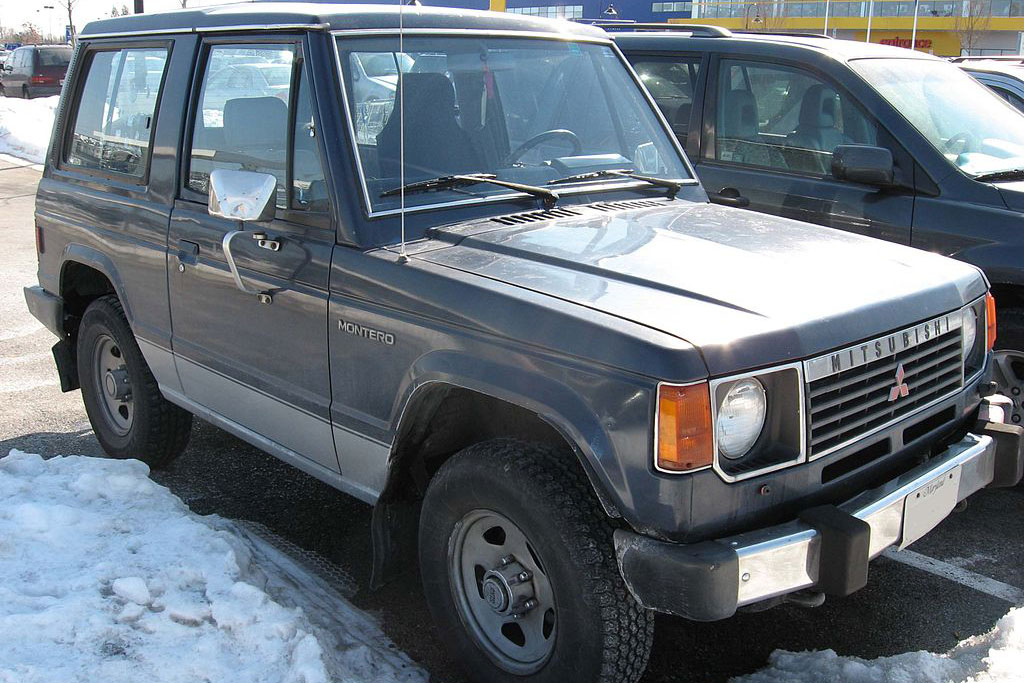 Perhaps the most enduring 2-door SUV success story is the Jeep Wrangler, although this too has seen wilting sales of its 2-door versions of late. Introduced in 1986, the Wrangler immediately found the sweet spot between off-road ability – body-on-frame construction, solid axles front and rear, part-time 4WD – and on-road safety and comfort. It’s been a hit ever since with both genuine adventurers and city drivers who just want to project an outdoorsy aura.

The Wrangler benefits from an undeniably rugged and patriotic heritage that reaches back to the original Willys MB Jeep, which was employed in vast numbers by the US military in World War II. On-point marketing, plus frequent updates that have deftly moved with the times, have preserved it as an attainable cult icon beloved of better-off college students and mid-life-crisis suburbanites alike.

With a windshield that folds flat and removable top and doors, the Wrangler also satiates our contemporary obsession with customer choice. This is loudly manifested in its current “Build A Jeep” array of options. But fewer and fewer Wrangler buyers are opting for a 2-door model. As of 2017, more than three-quarters of all new Wranglers were four-doors. 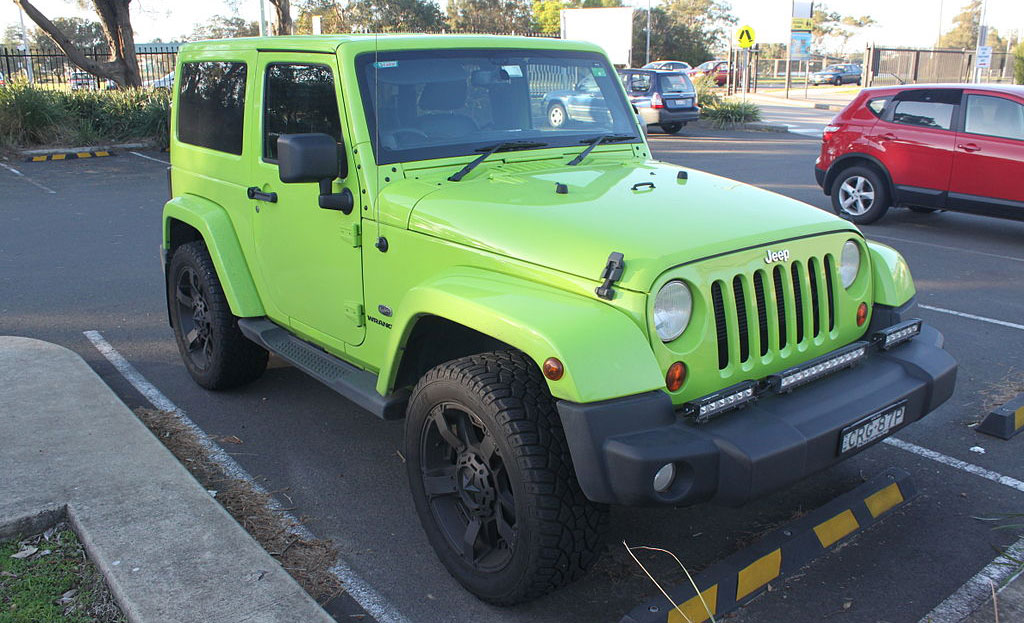 The second-generation Isuzu Amigo that I owned until recently was one of my favorite cars, and certainly my favorite SUV. But when and why I owned it is indicative of the limitations of such 2-doors SUVs. I only bought it once my stepdaughters had their own licenses, so I was no longer carrying multiple passengers on a regular basis. And when I started needing more cargo space, my beloved Amigo had to go.

In between times, two of my teenage kids used the Amigo for extended spells and they perhaps characterized its target market. Single and childless, they also love the sun, beach, and camping. The Amigo came with a soft-top or a removable hardtop with twin sunroofs and was available with four-wheel drive – perfect for younger drivers and off-asphalt activities. While mine was the better-appointed 2nd-gen model (1998-2004) – renamed the Rodeo Sport in 2001 –, the earlier incarnation (1989-1998) offers many similar charms. 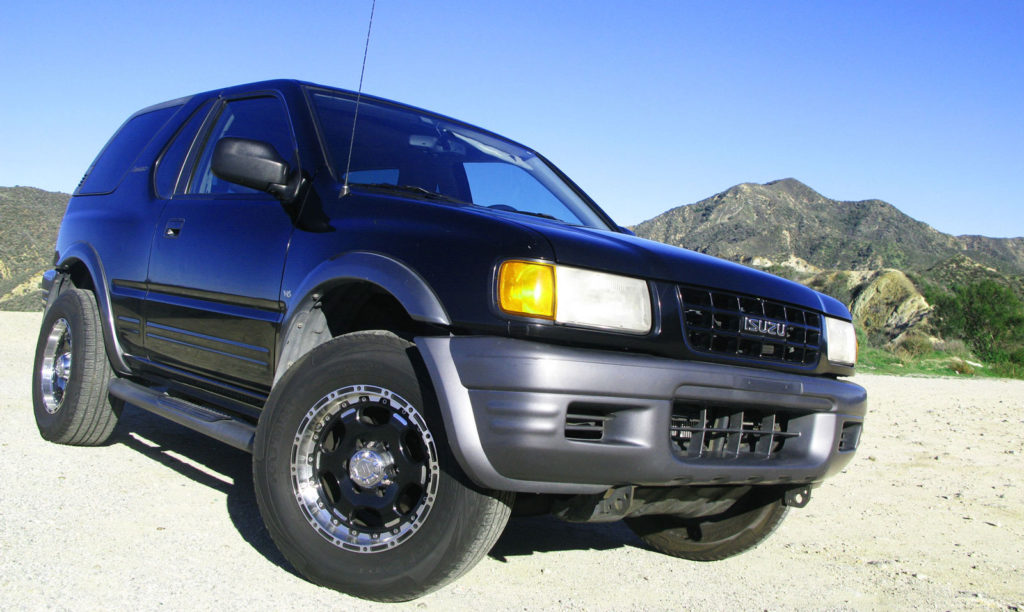 Yet, like so many small 2-door SUVs, one of the disappointments of the Amigo – and its outlandish, limited-production VehiCROSS spin-off – was its gas mileage. My 1999 6-cylinder automatic returned only 17 mpg combined city/highway. While the 4-cylinder version is slightly more gas-frugal, this is nonetheless underwhelming for such a small car with only limited rear seating.

And there were certainly occasions when the Amigo’s two-doorness caught me out. For example, when a French couple visited and we were doing the “tourist thing” around L.A., constantly having an adult clambering in and out of the back through the passenger door got old. Overall, like many of its class, the Amigo is largely a car for two eras of life: for the young, childless years; and then for the so-called “empty-nest” chapter, after the kids are grown and gone. 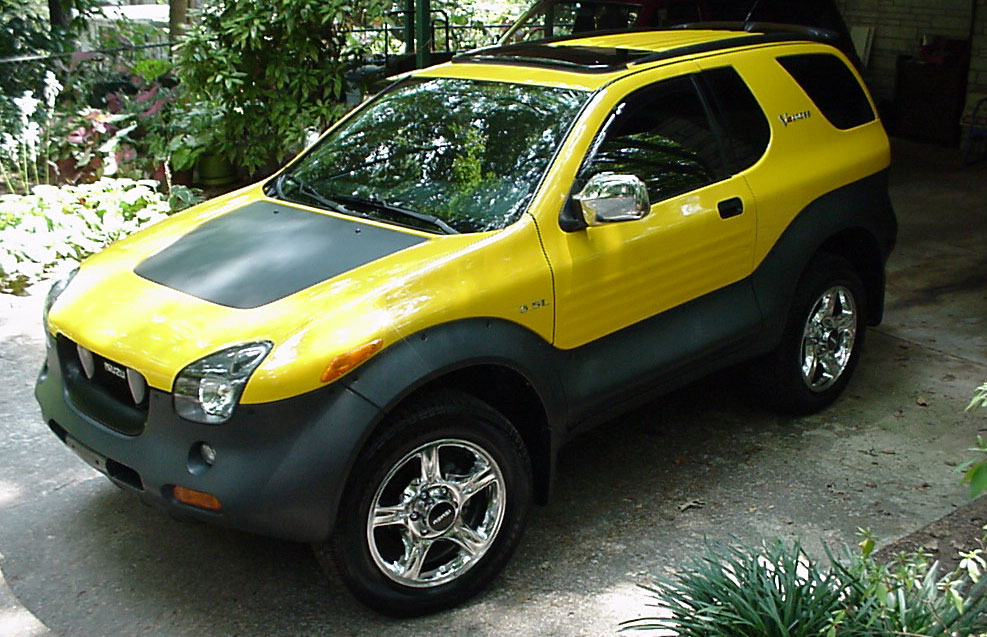 I owned both a 2-door Ford Explorer Sport and its rebadged Mazda variant, the Navajo. Both were solid vehicles (I got over 250,000 miles out of the Navajo). But they also characterized an era when SUVs were morphing from truly rugged utility vehicles into glorified cars, with very limited off-road ability – much more comfortable on a Home Depot run than in sand or dirt.

The typically 4-door Explorer replaced Ford’s ill-fated Bronco II for the 1991 model year and is now in its sixth generation. But the 2-door SUV Explorer Sport was relatively short-lived. It made it to the Explorer’s third-generation but was dropped in 2003.

It seemed odd that Japanese automaker Mazda plugged the SUV gap in its line-up with only the 2-door Explorer, rebadged as the almost identical Navajo. The Navajo only lasted from 1991-1994, and few survive today.

Once again, the relative smallness and limited practicality of the Explorer Sport/Navajo was barely offset by gas savings. My 6-cylinder models, which were both automatics, managed only around 16 combined city/highway mpg – little better than the equivalent full-sized, 4-door models. Even so, later-model Explorer Sports can be real bargains as first cars or runarounds for drivers who require a little cargo capacity but don’t do many miles. 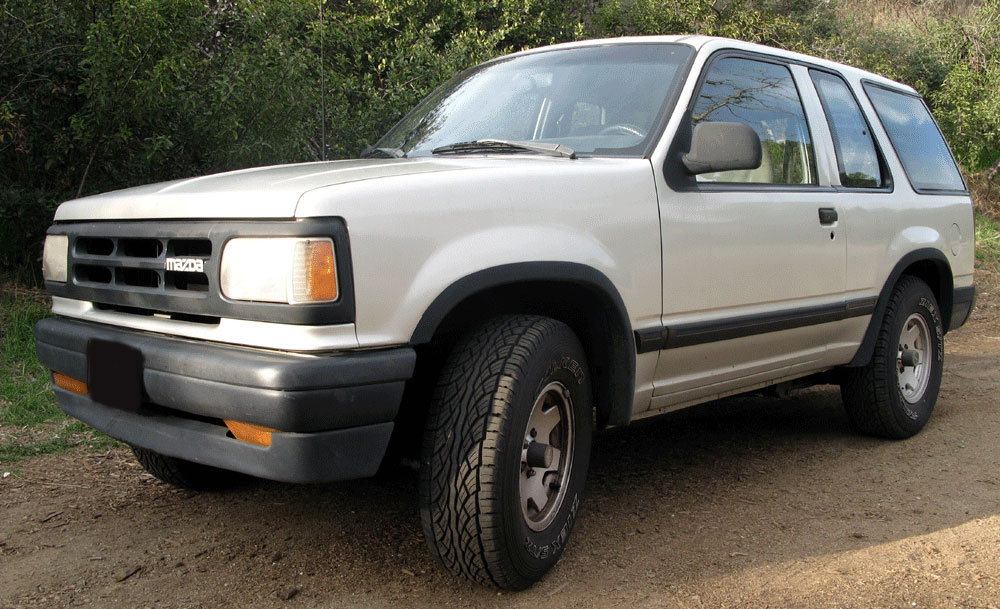 Recent attempts at 2-door SUVs do not augur well for their comeback. The hi-tech and very handsome Range Rover Evoque Coupe, introduced in 2011, was quietly dropped for the 2019 model year. The reason seemed to be simply lack of sales: the Coupe was being outsold even by the Evoque convertible, which apparently ate into demand for the Coupe after its introduction in 2017. And up to 95% of overall Evoque sales were of four-door models.

Similarly, the 2-door MINI Paceman crossover SUV lasted only 2012-2016. The Paceman was being outsold almost 10 to one by its 4-door sister model, the Countryman, in the U.S. In fairness, MINI owners BMW only ever planned the Paceman as a niche vehicle. But it didn’t even meet its limited sales goals, apparently due to its reduced versatility and higher price, combined with a shift in brand strategy to focus on core MINI models. 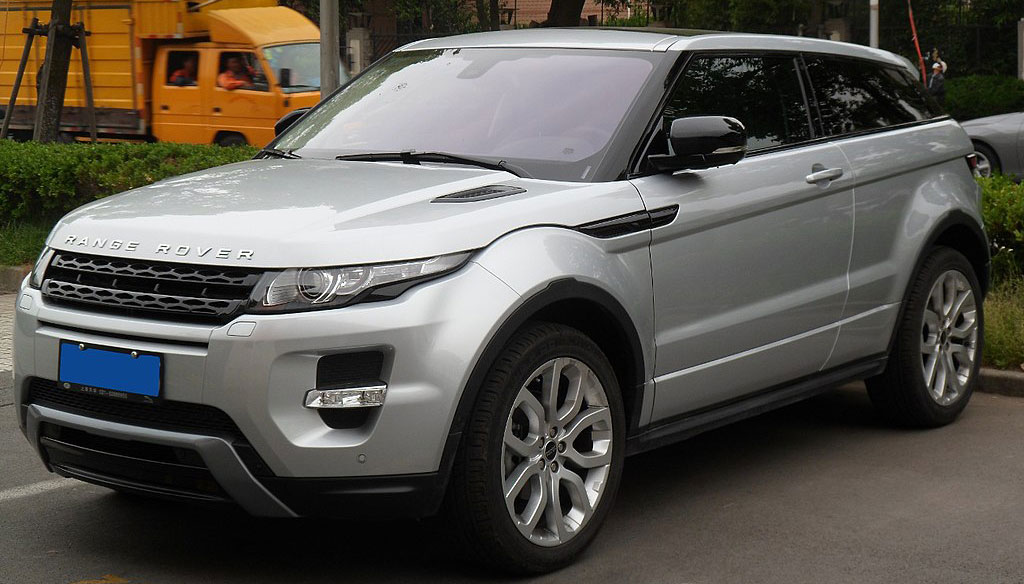 So could a new 2-door Ford Bronco be for you? Or would you consider a used example of one of the models above? There appears to be a consensus among today’s drivers that if they’re going to buy a sport utility vehicle, they want it to have maximum utility – and that includes having 4-doors. And any true “sportiness” implied by the SUV classification appears to be less important than ever to most car shoppers.

But take a look at the vehicles actually out on our roads, new SUVs included, and you’ll notice that the vast majority have just one or two occupants and are carrying no cargo whatsoever. This suggests that, for some of us at least, the 2-door SUV could continue to be a cute, easier-to-park (if not terribly economical) option that offers more utility than most compact cars or sedans.