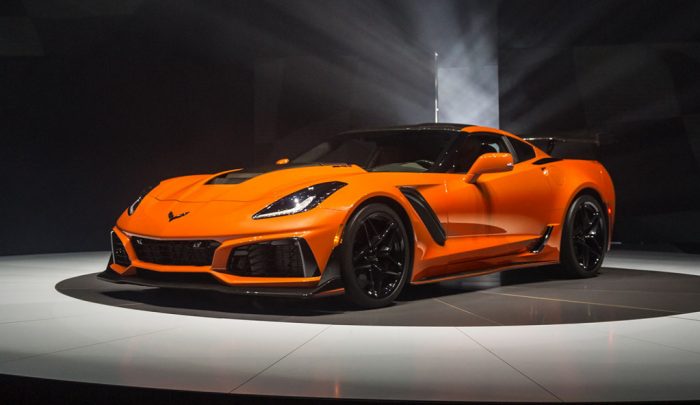 The Chevrolet Corvette is a true icon of the American auto industry, but despite being one of our most legendary cars, it’s also one that’s never been afraid to move forward in terms of its styling and engineering. While a brand new Mustang is still easily identifiable as a successor of the original from 1964, the latest Corvette has little in common with the inaugural C1 from 1953 other than the Corvette name and the continued use of fiber-glass for the body panels.

It would be easy to assume that as the ‘Vette has continued to develop over the years, each model would have been faster than the one that had preceded it. However, even though we have been treated to the fastest production Corvette ever, recently in the shape of the new stunning ZR1, the Corvette hasn’t necessarily always followed the aforementioned statement with each new generation.

Here we’re going to take a look at the 10 fastest Corvettes that have ever been produced. Before any enthusiasts start to go ballistic about these not being the 10 fastest examples, however, let’s make it clear which models are being considered and which ones are not. This is a list of the fastest production Corvettes ever, which means models built specifically for the track and models that have been tweaked by tuning companies are not being considered here. This is a list that celebrates the pure, unadulterated wonderfulness of what has come off of GM’s production lines and nothing else. These are simply the fastest Corvettes we’ve ever been able to order from a brochure by walking into a Chevy dealership.

First Up, An Honorable Mention:

Anniversary models of vehicles aren’t always destined to be classics of the future, but the C5 Anniversary Edition Corvette is one that really was worthy of marking such an auspicious milestone in the car’s history. Ok, it was really just a fifth-generation model given a number of aesthetic and design upgrades in 2003, but it gave an extra special look to what was already a pretty special car. The power was provided by a 5.7-liter V-8 developing 350 horsepower, which propelled the C5 from 0 to 60 in 4.5 seconds and onward to a top speed of 160 mph. 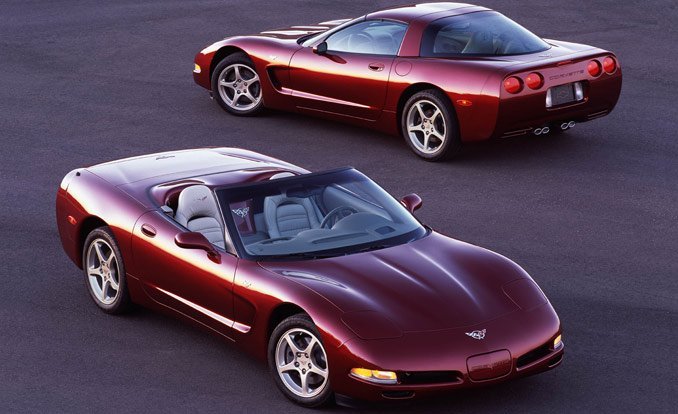 What Is The Fastest Corvette Ever Made?

The ZHZ is a model that truly embellishes the Corvette’s illustrious history, and that’s before you even think about its performance. That’s because this one wasn’t any ‘ordinary’ Corvette, it was actually a special variant that was produced quite specifically for the Hertz car rental company. We may usually think of rental cars as being functional and fairly mundane in most cases, but that’s certainly not the case here. The ZHZ squeezed a whopping 6.2-liter V-8 under its hood that produced 436 horsepower. Only 500 examples were produced in 2008 as it became the fastest automatic-equipped Corvette ever, with a 0 to 60 time of 4.3 seconds and a top speed of 190 mph. 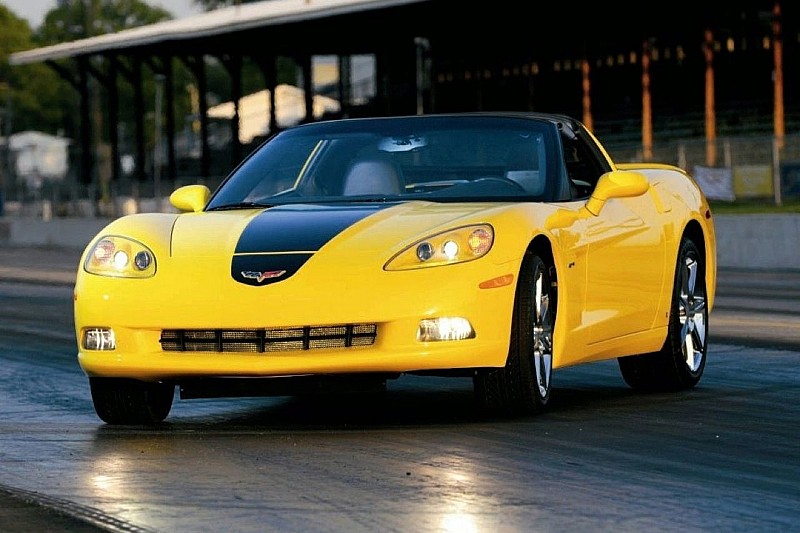 The Corvette C6 Grand Sport Coupe was a 2013 sixth-generation model that finds itself on our list at number 9. This one took the 0 to 60 time down to a flat four seconds and it’s reported to have a top speed of 190 mph, although some resources quote it at 186 mph. That performance was generated by a 6.2-liter V-8 producing 430 horsepower and 424 lb.-ft. of torque. Whether the top speed is really 190 or 186 mph will probably bother some people, but either way, this was a very fast ‘Vette. However, although it easily makes it onto our list, it wasn’t even the fastest Corvette of the 2013 model year, as you will see. 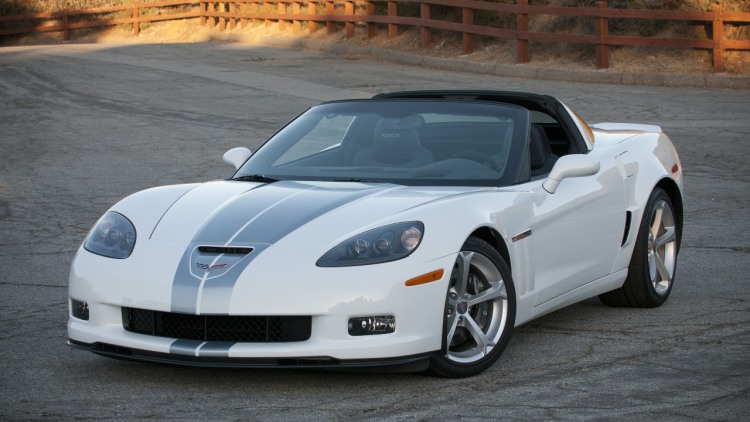 We’re starting to get pretty close to the latest Corvettes with this one as the Z51 is a 2014 model. This is a superb example of the modern design and engineering that has truly restored the Corvette name to its former glory. As well as helping to restore the car’s reputation, this one also brought about the welcome return of the “Stingray” name. The 6.2-liter V-8’s 455 horsepower may seem a little modest by some current standards, but that was enough to get the Z51 to 60 in just 3.8 seconds and onward to the top speed of 190 mph. 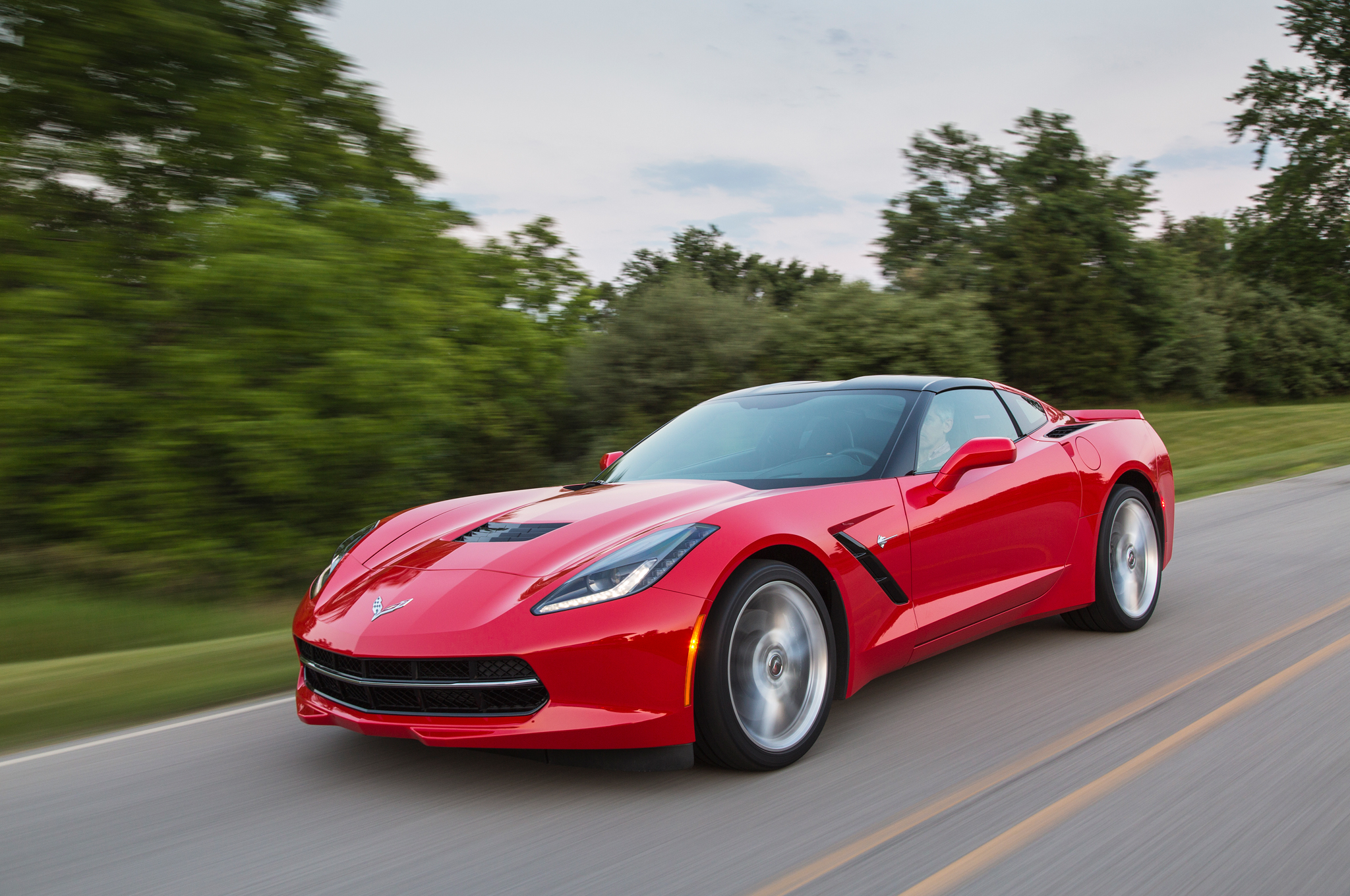 The 427 takes us back to the same 2013 model year as the Grand Sport, but this one goes just that little bit faster than its sibling at number 9 on our list. The 427 was an excellent model to mark the 60th anniversary of the Corvette and it employed a monster 7.0-liter V-8 as opposed to the usual 6.2. That took the power up from the Grand Sport to an impressive 505 horsepower and 470 lb.-ft. of torque, which meant the same 0 to 60 and top speed as the Z51. 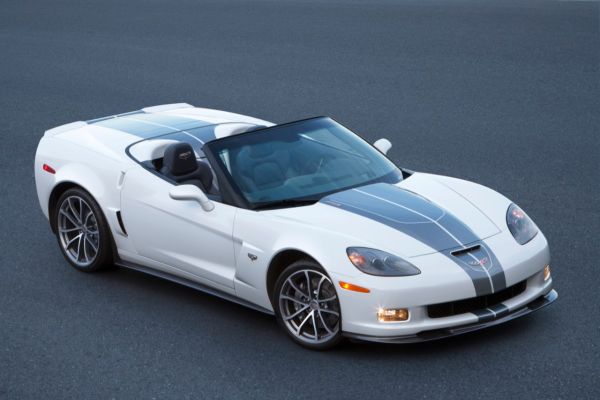 The Centennial Edition of the Z06 Corvette was unveiled as a limited release in 2012, and came with a price tag that reached into the realms of six figures. This is another model utilizing that 7.0-liter, 505 horsepower V-8 powerplant to once again reach 60 mph in 3.8 seconds, and it could manage the quarter-mile in just 11.9 seconds. 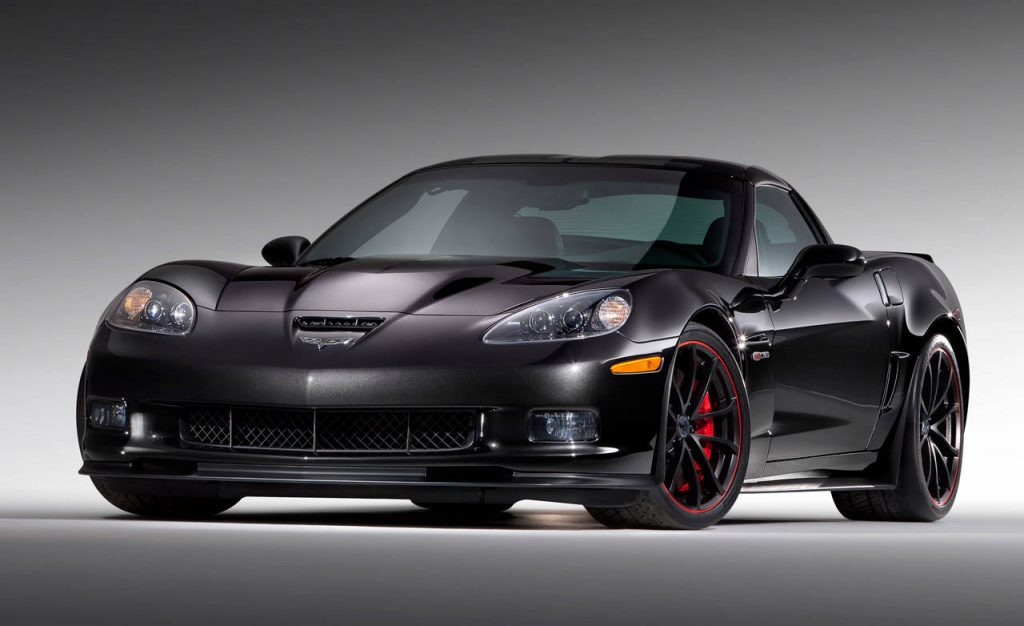 We take a step back in recent Corvette history here for the 2011 GT1 Championship Edition, which was a limited-edition model produced to celebrate the Corvette’s GT1 racing program in the American Le Mans Series. This really was a production car that could double as a track day monster, with a 7.0-liter V-8 getting it to 60 mph in 3.7 seconds and the quarter-mile coming up in as little as 11.6 seconds. 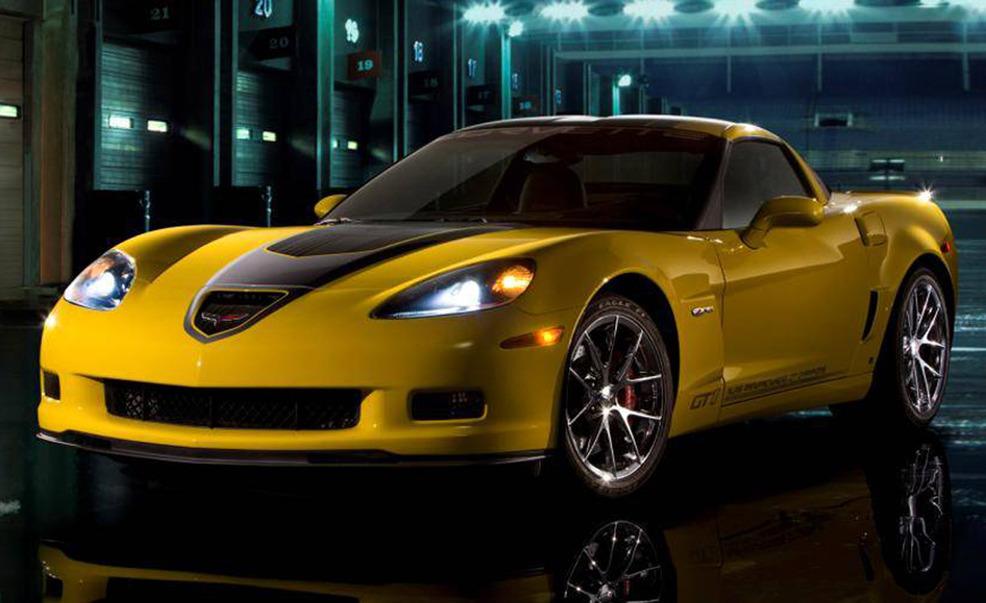 The 2011 model year Carbon Edition is another Z06 variant employing that now-familiar 7.0-liter, 505 horsepower V-8 format to get the car to 60 mph from a standing start in 3.7 seconds. This Carbon Edition of the sixth-generation Z06 definitely found itself a place in Chevrolet’s record books, but only for a short time. Although not as powerful as some of its counterparts, the Carbon Edition had some fancy tricks up its sleeve to achieve better weight distribution for improved speed and agility. Tadge Juechter, the Corvette’s chief engineer, even heralded this one as the best balanced Corvette ever, and claimed it could shave as much as three seconds off the lap time of a standard Z06 at more technical tracks such as Laguna Seca. 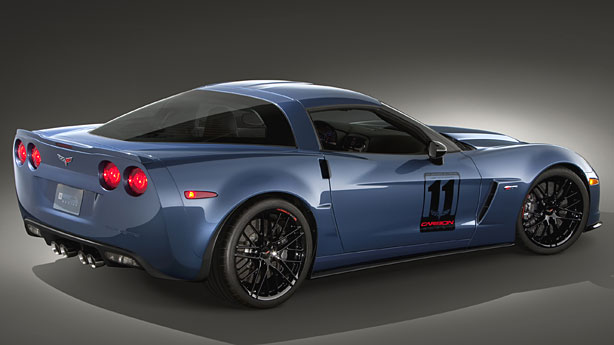 Things are getting really serious now as we look at what is now the third fastest production Corvette ever, the 2013 ZR1. The quarter-mile time of just 11.3 seconds should tell you most of what you need to know about this street-beast, so hitting 60 from a standing start in 3.4 seconds is probably just boasting really. Of course, numbers like those don’t come cheap today, and they didn’t in 2013 either as this 638 horsepower, 6.2-liter V-8 beauty had a price ticket north of $100,000. With a top speed of 205 mph, this one held the record as GM’s fastest-ever production car until the Corvette nameplate went and eclipsed its own record yet again recently. 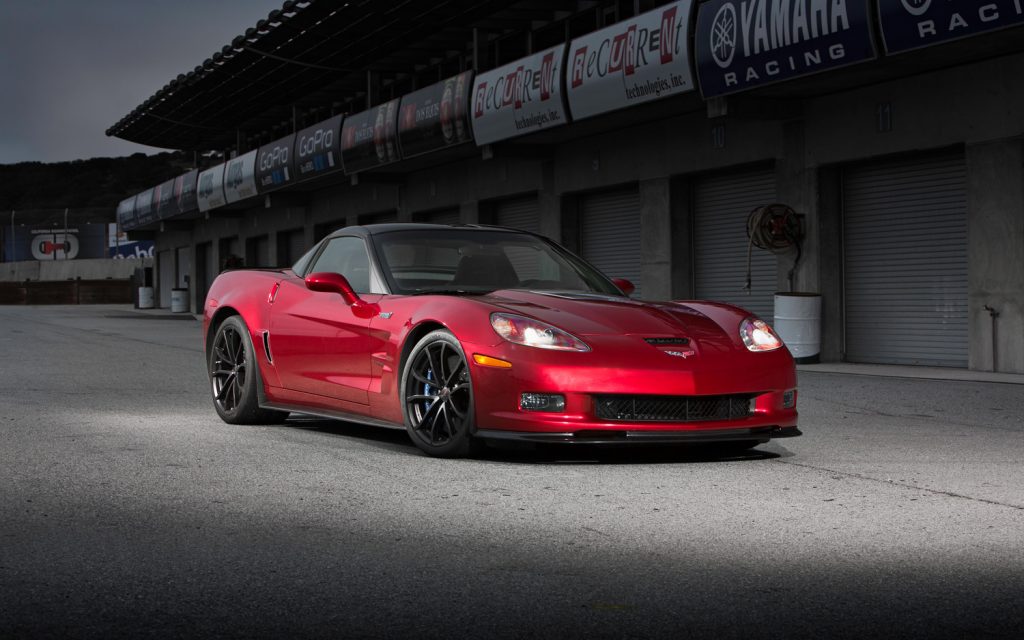 When it came out in 2015, the C7 Corvette Z06 didn’t only become the GM’s fastest production car, but the fastest production Corvette ever produced. The new C7 Z06 doesn’t just beat the record set by the old C6 ZR1; it chews it up and spits it out with a blistering 0 to 60 time of just 2.95 seconds. The Z06 still hosts a 6.2-liter V-8 engine, but this time it’s tuned to develop a staggering 650 horsepower and 650 lb.-ft. of torque. General Motors’ executive vice president, Mark Reuss, summed things up nicely in a statement about the new Z06 by saying: “The Corvette has long been known as America’s sports car. With the capability of the new Z06 rivaling the best performance cars in the world, we will also be America’s Supercar.” 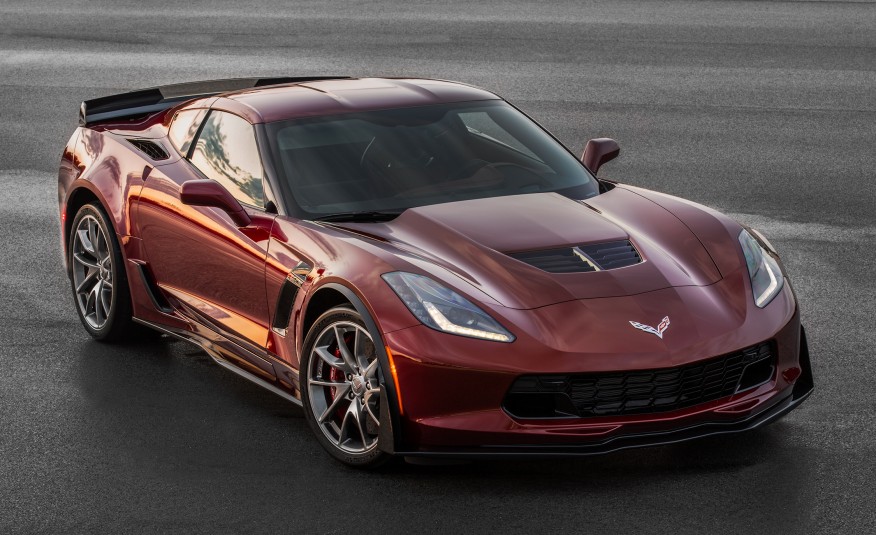 King of the ‘Vettes is a title reserved for the ZR1 nameplate, it would seem. After the C6 ZR1’s reign which lasted more than half a decade, it’s now time for the C7 ZR1 to take the reign. Starting at $119,995, the ultimate Corvette packs a 6.2-liter LT5 V-8 mill which generates a whopping 755 horsepower and 715 lb.-ft. of torque. Not only does it accelerates to 60 mph in less than 3 seconds and maxes out at 212 mph, but for the first time ever, it does a quarter-mile in less than 11 seconds. Truly amazing figures worthy of the most powerful and fastest production Corvettes ever.

So there you have it. The current ZR1 is not only the fastest Corvette ever made, it’s also the fastest car ever to roll off a GM production line. 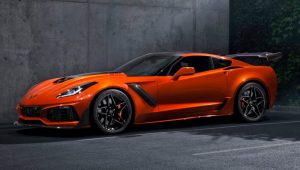