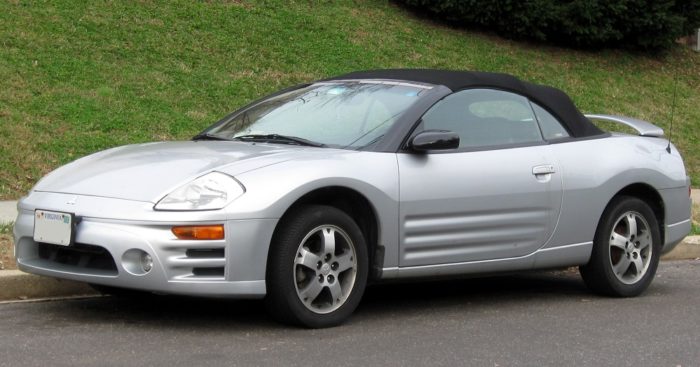 With warmer weather approaching, the call of the open road is heard in many drivers’ ears. Although that old minivan is great through snow and hauls the kids like no one’s business, there’s plenty to be said for a good, spirited little sports car with a drop-top roof to make those summer evening jaunts to the ice cream parlor something really special. Need to keep your ride on the cheap, though? No problem. These cars have been around long enough that there are plenty of them in good condition on the second hand market – and if you’ve done your car buying homework, you might be able to find a few convertibles for sale that are as close to new cars as possible without a scratch on them!

New cars are great, but expensive, especially the best convertibles and sports car models. So rather than splash out on a new car, why not check around your local second hand car dealer yards and online auctions for something pre-loved but far more affordable? If you’re prepared to shop around and do the homework on your car buying task, you can land yourself some excellent car deals.

The trick to scoring the best car deals is to keep your expectations low. Don’t go out searching for a discount Porsche Boxster, because if you’re on a strict budget, you’re not going to be driving home in a Porsche Boxster – but if you keep an open mind and shop around you can find the best cars for the right price. Hopefully you can find these cars for sale in your areas – ideally a few certified pre-owned cars – and you can ride around this summer in one of the best convertibles (and best cars!) that you can buy on a shoestring budget! 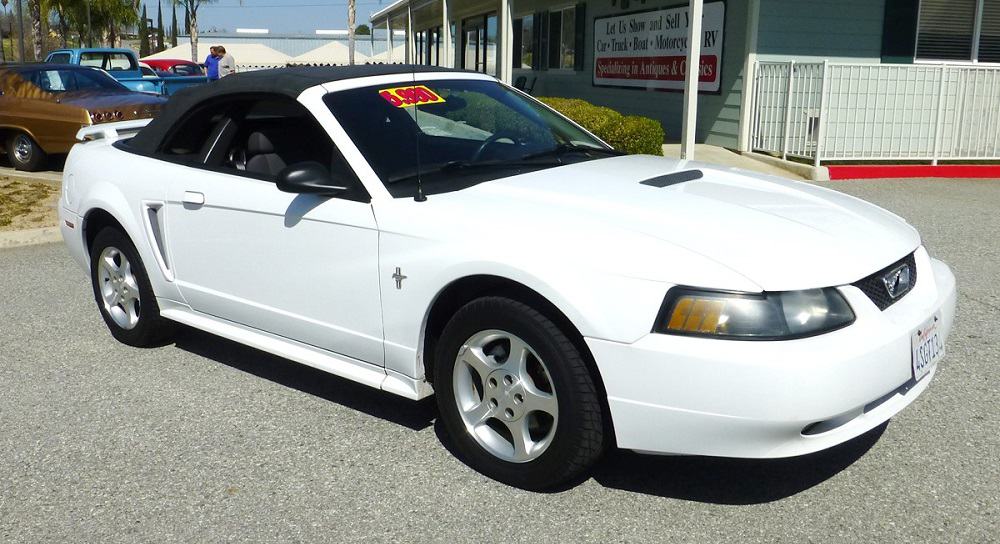 After shedding some of its rounded, import-like appearance, the Ford Mustang regained some of the appeal that it had lost through the late 1980s and early 1990s. Although not as desirable as the ’05 and newer Mustangs, there’s an added bonus: These Mustangs can be had cheap. Numerous special editions are available, many at less than $10,000 for examples with between 80,000 -100,000 miles. Do they turn up regularly? Yes! In fact, they regularly feature on used car pages and it’s very rare not to find a few good quality examples listed! 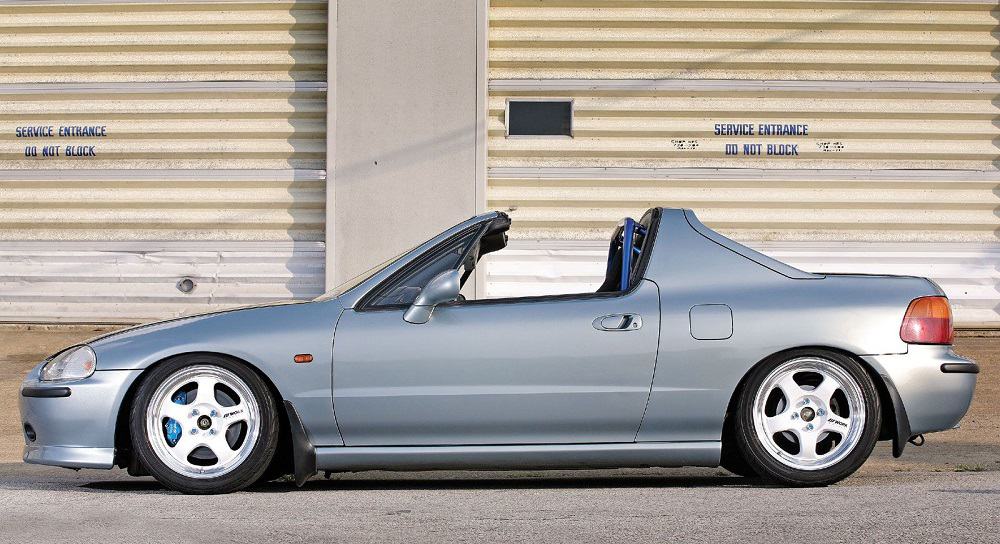 Although not a convertible in the strictest sense of the word, the Del Sol’s targa top is easier to care for on used cars. In addition, the car’s basic underpinnings are still that of the Civic, one of the most reliable and long-lived cars in the world. If you plan to purchase one, though, keep in mind that these cars are relatively popular with auto customizers, both those who know what they’re doing, and those who don’t. You want to look out for those that are as close to a “new car” as possible, rather than ones that have been tampered with. There might be attractive looking car deals on customized units, but it’s best to avoid them altogether. 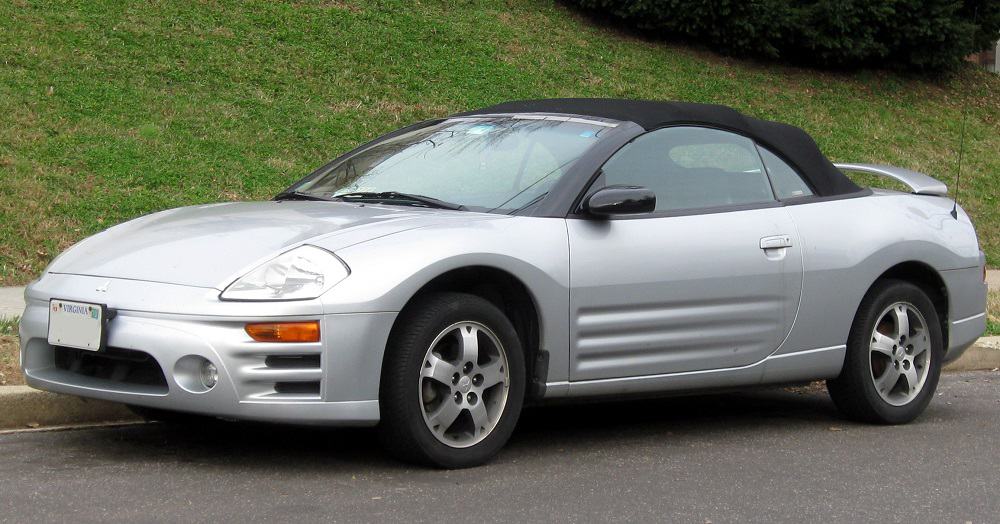 With either a four or six cylinder engine, the Eclipse was in equal measure both a sporty and economical car. With the top down, these cars have relatively good rear seat space, just in case you want to bring the kids along for the ride. A choice of manual or automatic transmission can be found with both engine sizes. Another popular choice with customizers, beware of cars that are significantly altered from their original configuration. 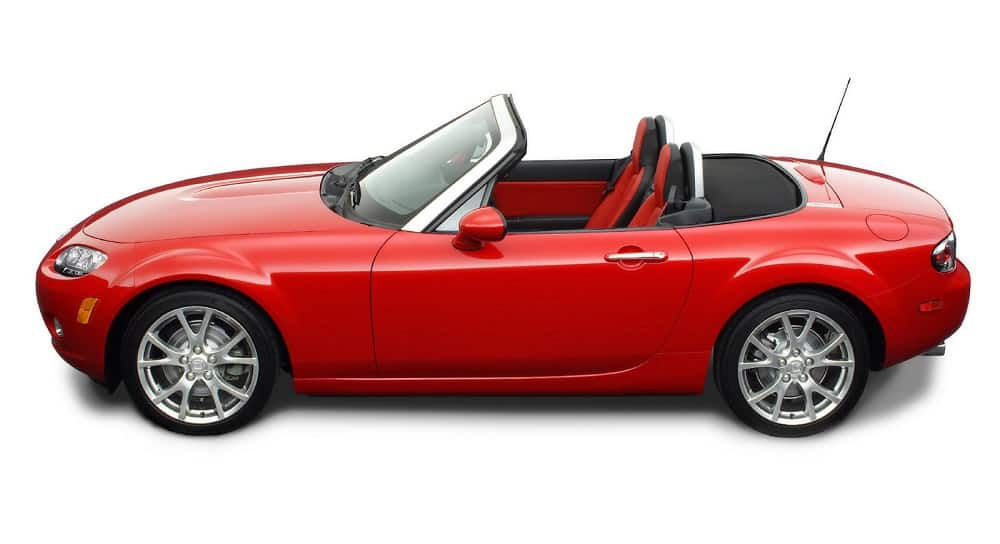 The venerable Mazda Miata belongs on just about any “best cars for sale” list. It is light and quick, just the way a fun to drive convertible should be. It’s front engine/rear drive layout provides excellent weight distribution, and the four-cylinder engine is both gutsy and economical. Additionally, since many of these Mazda Miata models were purchased specifically with summer driving in mind, many older model years are still in excellent condition, having spent their winters garages, and drive just as well as a new car would. The Mazda MX-5 Miata is one of the best convertibles you can hope to find for sale! 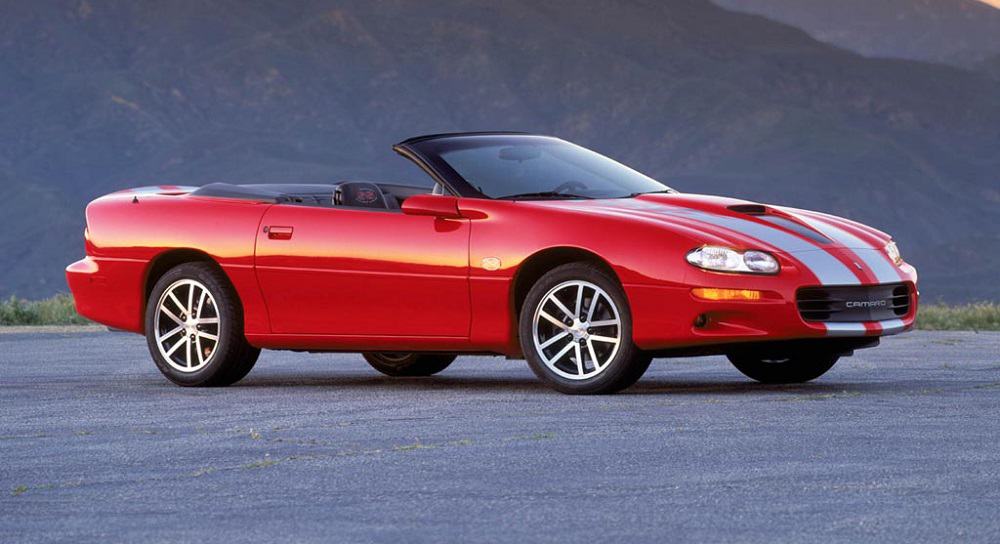 Like the Ford Mustang, the Chevrolet Camaro underwent a major styling upheaval prior to the introduction of the latest generation car. This left the previous generation in the unenviable position of being the undesirable older sibling. The benefit is that this brought down the price of all the late 1990s Camaros, convertibles included. With a choice of either a V6 or V8 engine and either a manual or automatic transmission, the Camaro is as versatile as it is easy on the eyes, making it one of the best cars out there for those looking for an affordable convertible.

How About Some Newer And More Expensive Offerings? 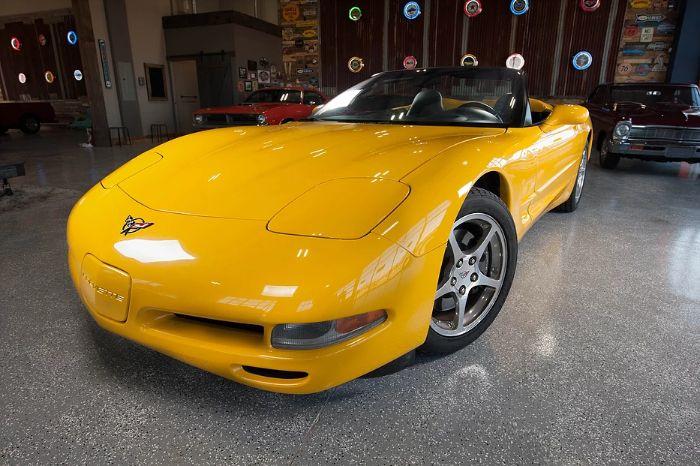 Anyone with a passion for cars would want to own a Chevrolet Corvette at least once in their driving career, so why not take a punt on a convertible version? The 2002 Corvette convertible offers sporty handling and a stylish aesthetic, plus you can take the top down and enjoy that summer sunshine too. We’ve seen these go for as little as $10,000 for high mileage and prices well in excess of $25,000 for tidy examples. Even at the cheaper end it sounds like a huge amount of money, but that’s the price you pay for riding around with top down listening to the purr of an American V8. 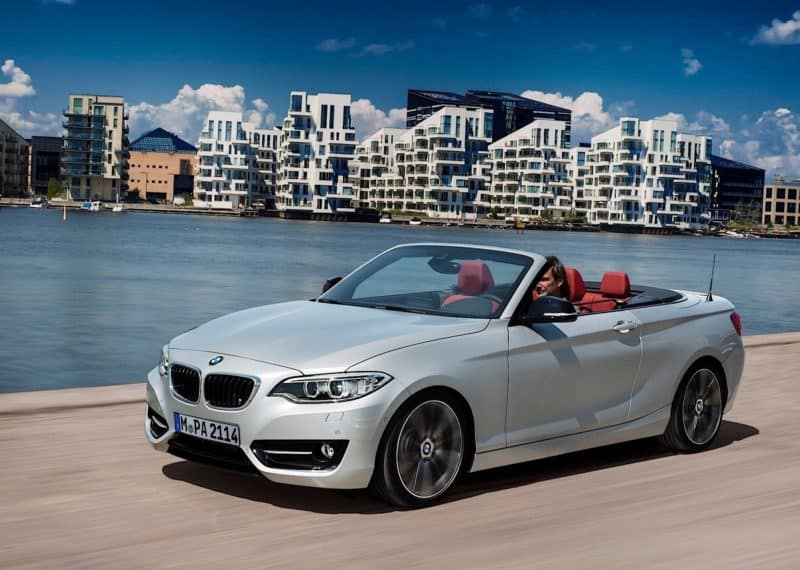 It might be a tall order trying to find one of these in the “used” section of your local car dealers, and one of these certainly won’t be cheap either but that doesn’t mean that you can’t score a bargain. Compared to other models on this list, the BMW 2 Series convertible is relatively new – and that’s a good thing. Fitted with modern accoutrements and gadgetry, as well as a variety of engine styles to choose from, such as turbocharged petrol and diesel configurations in three, four, and six cylinder layouts. 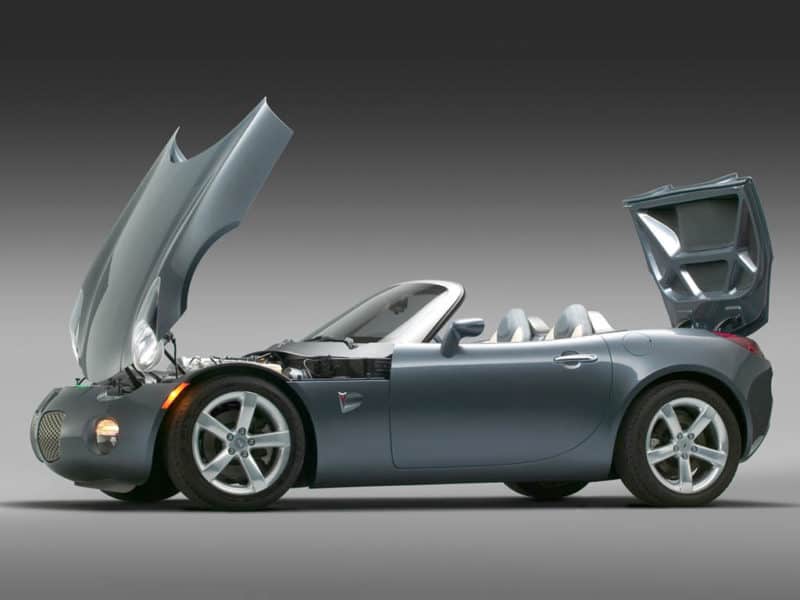 The Pontiac Solstice is a great used convertible if you can pick one up. Though they come with a couple of engine configurations, the best one you can find has to be the four-cylinder turbo version which produces a rather special 260 horsepower and 260 lb-ft of torque. This 2-door roadster isn’t particularly cheap though. Today, you can find cheap deals on the Solstice providing that you’re happy with a high mileage model. The turbo engine’d models with a healthier amount of miles on the clock can still command high price tags – but that’s the price you pay for one of the most popular convertibles from General Motors! 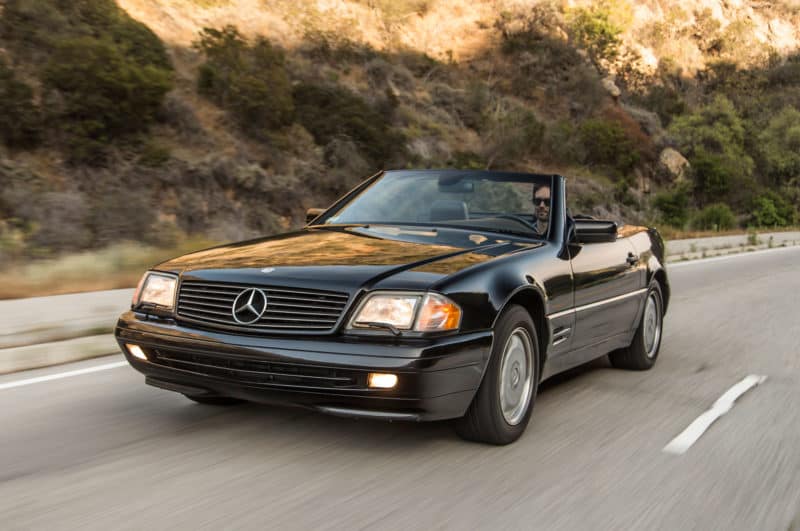 If you can find one of these with respectable mileage for a price that you can afford, do not hesitate on pulling the trigger. These cars are absolutely incredible. Not only are they fast, fun, and luxurious to drive, but they turn heads. Big time. As Merc’s top of the line two-seater offering, you know that the engine has all the power necessary to put a smile on your face, and with enough style to make you want to pull the top down whenever the sun shines. Today, you can pick these up for a fraction of the original price, which is a great deal if you can one in good working order! 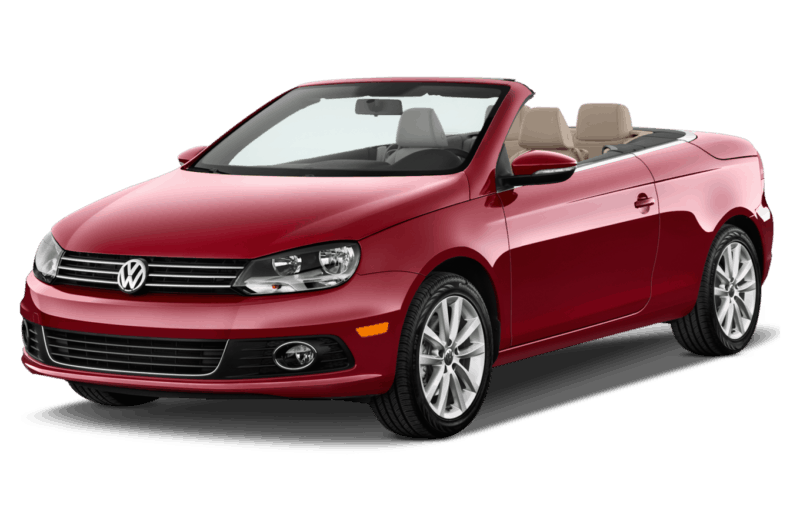 For a touch over $10,000 you can score yourself something like the Volkswagen Eos. Now, on the surface it might not look as sexy as the Chevrolet Corvette or as beastly as the BMW 2 Series, but you get something comfortable, fun, and seriously economical too. The Eos features a cool retractable hardtop roof that neatly folds away when the sun’s out and you’re ready for a cool drive in countryside, but while the roof is a big draw, don’t discount the engine, driving aids, and general comfort. You’ll be impressed with the quality of this vehicle.

Getting a good deal on a decent convertible is all about tackling the task with the right mind set. Manage your expectations according to your budget. If you’re looking for a cheap convertible on a tight budget, you can rule out your Aston Martin ambitions, and if you’re looking for a bargain you can also tone down your hopes of having anything fancy like heated seats, heated steering wheel, traction control, cruise control, and the like – because models with those features seldom turn up on the cheap pile. However, by doing a thorough search, putting the hours in, and knowing what you’re looking for you can score yourself a great deal on a soft top.

What other models are worth looking at? Well, if none of the above tickle you, you can try searching for a Volkswagen Beetle, a Mini Cooper, or something more unexpected like a Land Rover or Alfa Romeo…but if you want our opinion, the models listed above are much more appealing!