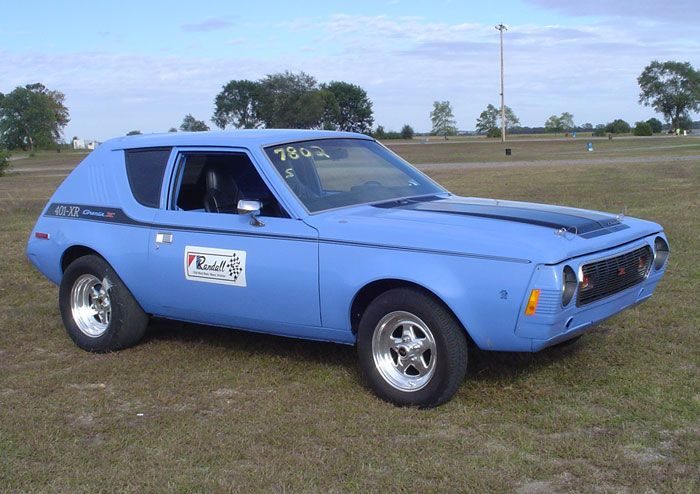 AMC, the American Motors Corporation, is undeniably the underdog of the American muscle car era, but that does not mean they were lacking in that particular department. They just had a different vision for what they thought American muscle should be. While most of their models are overlooked on the muscle car market, they produced some seriously epic classic cars that the United States should be proud to call its own. The following AMC models put other vehicles from other car manufacturers to shame!

Even though they had the image of building economy car models and as a practical US manufacturer of automobiles, they still made some absolutely monstrous cars straight from the factory. On top of that, they had success in NASCAR, Trans Am, and Rally racing. AMC engines were beastly, and when they were put into a nice handling package, they were unstoppable – ask any car magazine editor.

They may be the most geek-friendly American brand among car enthusiasts, but you’d be crazy not to want all of the sweet muscle cars on this list.

The AMC Matador has been more or less forgotten in the world of muscle cars, but this giant American muscle-yacht had some very interesting options and cool car features straight from the factory. 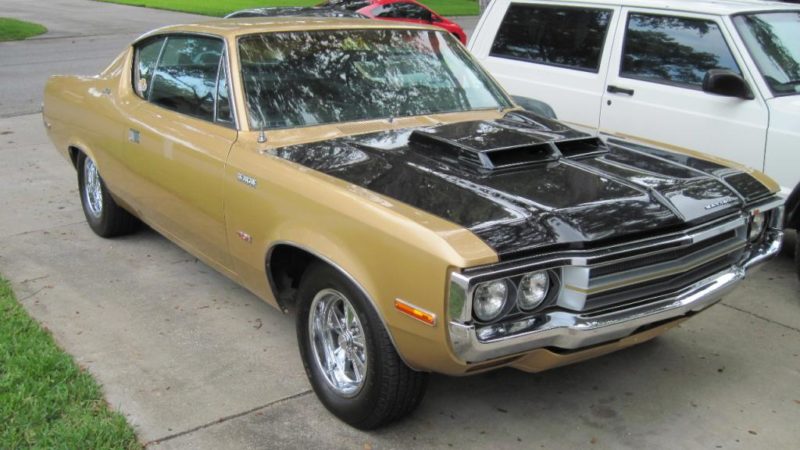 On top of the available 401 cubic inch V8 that made a very respectable 330 horsepower, there was an optional package from the factory called the “Go Machine” package that made the Matador, the successor to the AMC Rebel, perform like the more well-known Rebel Machine made until 1970. 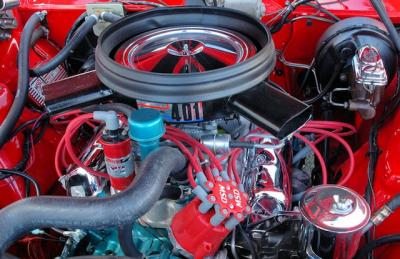 The package added a 4-barrel carburetor and upgrades to the suspension and brakes. This car is very rare, with only a handful of examples surviving today. Luckily, Matadors with a 401 under the hood are still around and still one of the cheapest muscle cars from the golden era you can buy. Look at those hood scoops.

Most people are familiar with the AMC Pacer, even if they don’t know it. Due to its, frankly, goofy shape and overall aesthetic, it is often used in movies and on TV as the butt of some joke or gag. (Schwing!) 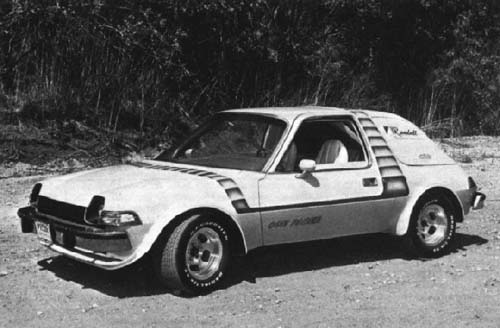 But the humble Pacer is not all fun and games. On top of being a formidable, rear-wheel drive hatchback, it had some trim levels that would turn heads to this day. 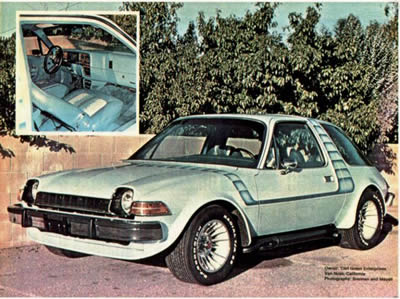 Carl Green Enterprises (CGE) made a kit to turn the 304 cubic inch V8 AMC Pacer, which was surprisingly quick already, into a monster with a 401 cubic inch engine under the hood.

To complete the look, wider tires, fender flares, and a special graphic came with the kit that would be installed by the dealerships themselves.

Despite being incredibly good-looking and quick, the AMC Javelin never caught on like muscle cars from the Big 3. Today it’s a rare sight even at specialist car shows, but those who remember it do so fondly, particularly in the Big Bad paint scheme! 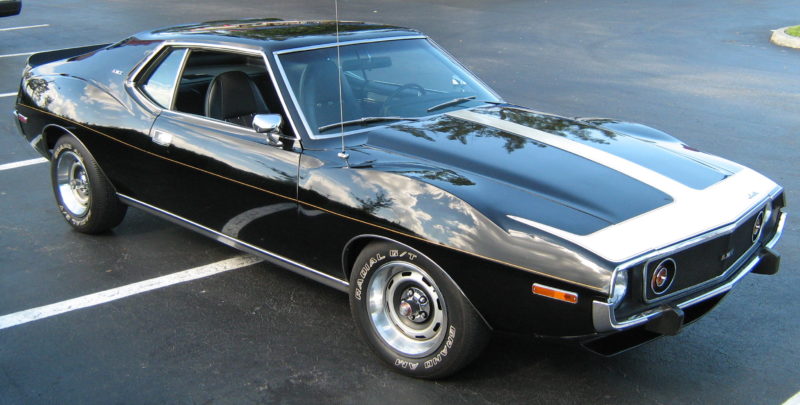 The Javelin AMX was a high-performance version of the Javelin that also replaced the smaller AMX AMC model entirely. Just more weirdness from AMC. 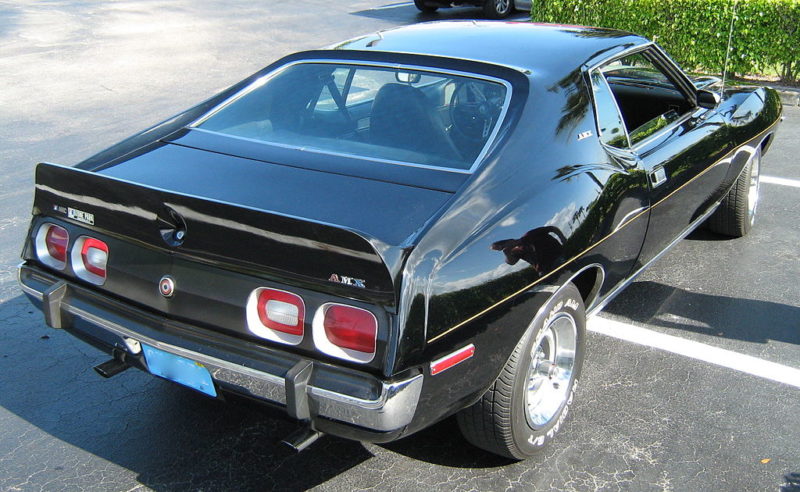 In top-spec form, it came with a 4-barrel carburetor dumping fuel into a 401 cubic inch engine making 335 horses. The AMX version also featured a dual exhaust, a rear spoiler and a cowl hood made of lightweight fiberglass. This pony car was a real contender and could put your (almost) average Ford Mustang in its place. Just look at that gorgeous 1974 model year example pictured here.

Sporting a 390 cubic inch V8 engine cranking out an impressive 340 horsepower and 430 lb-ft of torque, the AMC Rebel “The Machine” was available only in red, white, and blue color schemes with reflective stripes made for it by 3M. 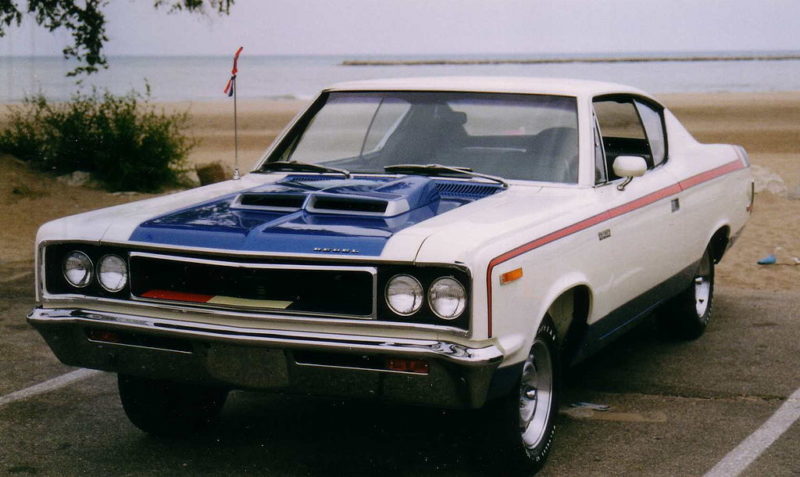 It ran quarter miles in the mid-14s straight from the factory, making it a natural drag racing machine, and had an unmistakable style that left onlookers with no question as to what they were seeing. 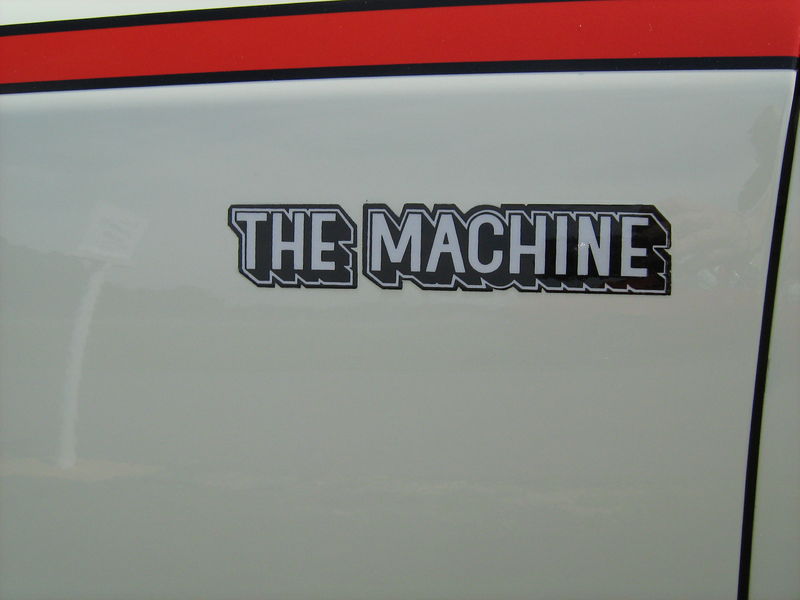 They knew it was The Machine.

If the CGE Pacer is just too weird for you, but you still want an AMC hatchback with a 401 cubic inch V8 under the hood, then look no further. 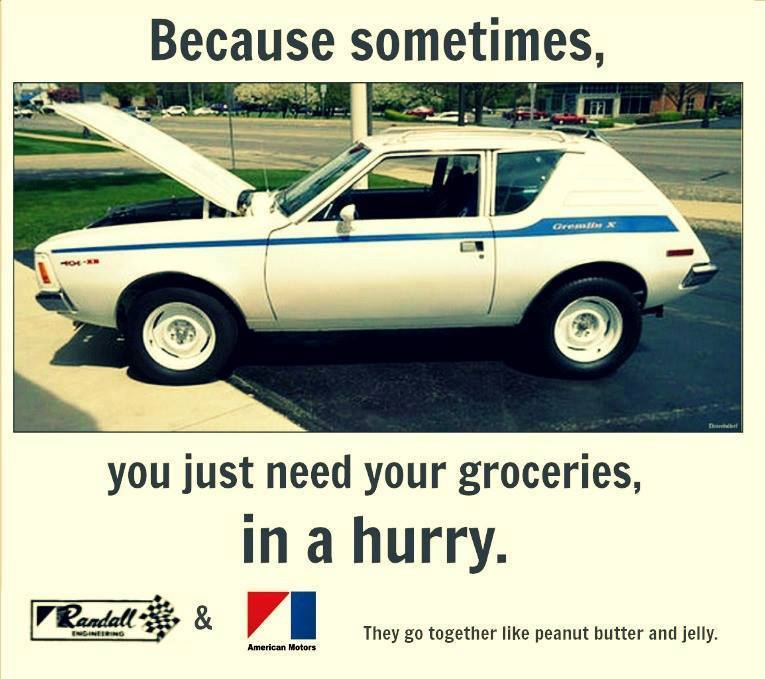 Randall AMC decided that the small AMC Gremlin needed a little more oomph and went ahead and stuck the V8 under the hood. Due to its light weight and big power, the car would run quarter miles in the high 13s right out of the box. 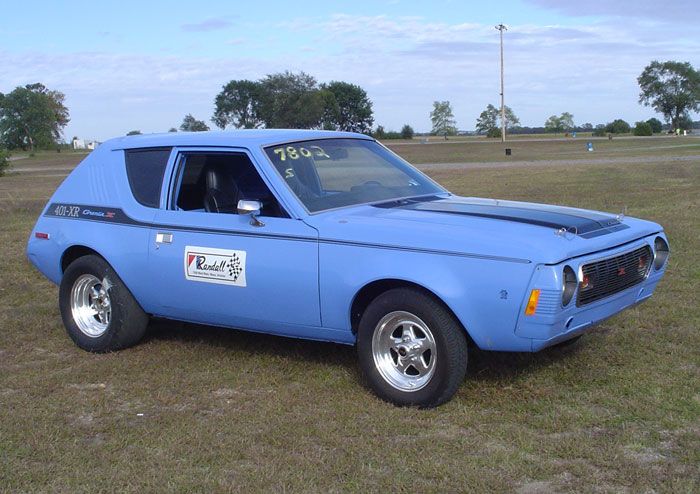 In fact, with all of the performance options available from Randall installed, the cars would run in the low 12s while still being able to drive you to the grocery store on Monday. Despite how ridiculous the AMC Gremlin looks, it has become an absolute cult classic and is often cited as one of the best cars from the AMC muscle division.

One of the best-known muscle cars from AMC; the Hurst SC/Rambler, has become legendary for its style as well as its performance. It also may be the most American car of all time. 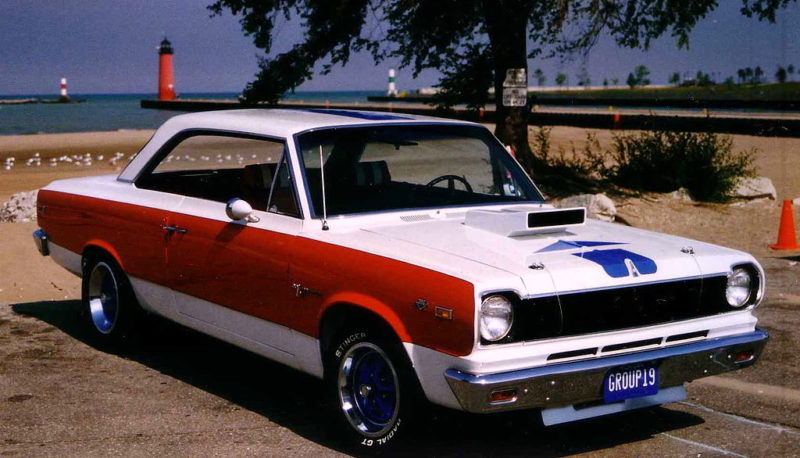 It was only available in red, white, and blue color schemes and the whole car was covered in special graphic touches which alluded to its race car persona. Power came from a ram air induction system powered 390 cubic inch V8 to the tune of 315 horsepower, and you could shift through the four gears with a big Hurst T-handle shifter. 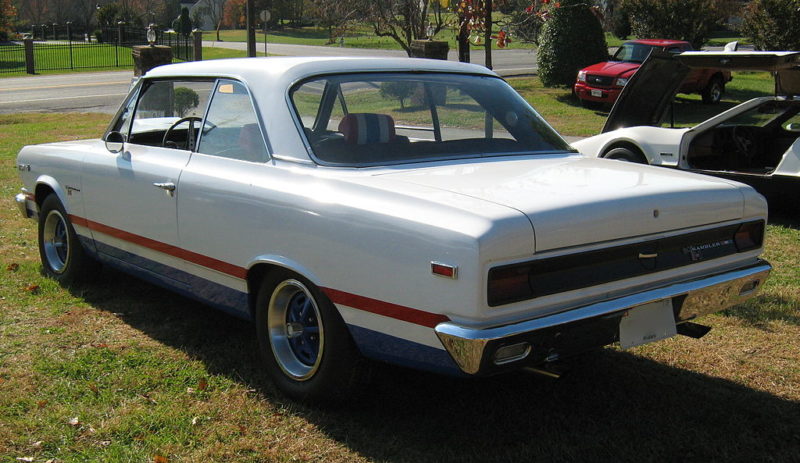 Performance was also enhanced with a limited-slip rear differential and upgraded suspension complete with sway bars. Disc brakes came with the package as well, making the Hurst SC/Rambler one of the most well-rounded muscle cars of all time, and easily one of the best AMC car models in automotive history.

It’s sad to think that one of the most formidable American sports cars from the 1960s, along with he only competition to the Chevy Corvette at the time, has fallen so far into obscurity. The AMC AMX was a small, two-seat sports car that was pretty quick in just about every iteration. One version in particular, though, takes the cake as far as performance goes. 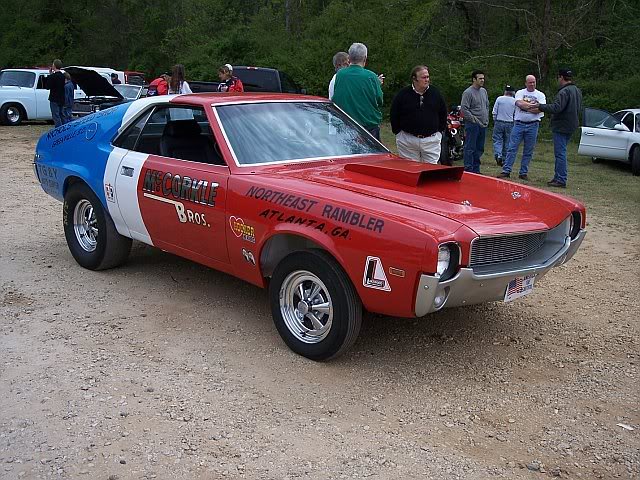 Packing a 390 cubic V8 engine tuned to 340 horsepower and a stripped out body with Hurst accessories inside and out, the Super Stock AMX was a race car right from the factory. It could run a quarter mile in 10.7 seconds. 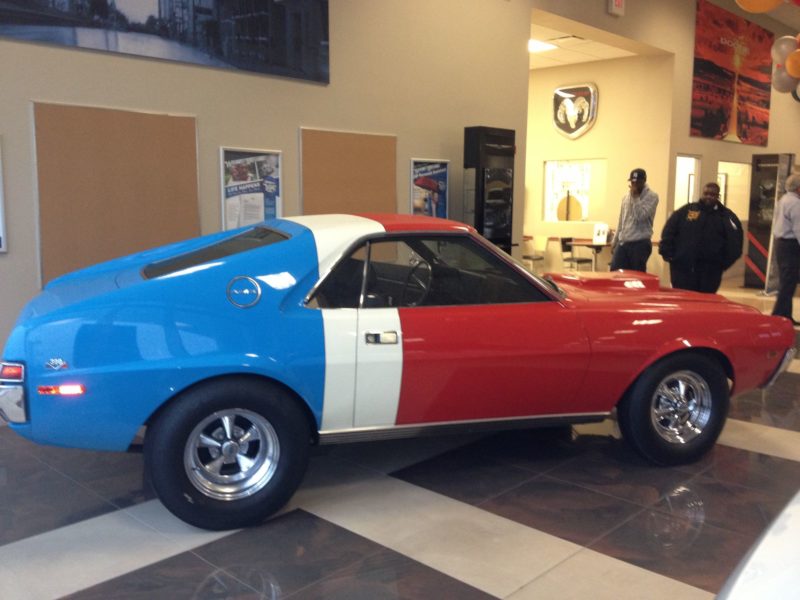 Available in only red, white, and blue color schemes, the Super Stock AMX is just so odd, so fast, and so representative of AMC cars as a whole, that I can’t help but put it at the top of this list of AMC beasts. Not only is it one of the best old-school street muscle cars on the classic car market, it’s easily one of the greatest American cars of all time.