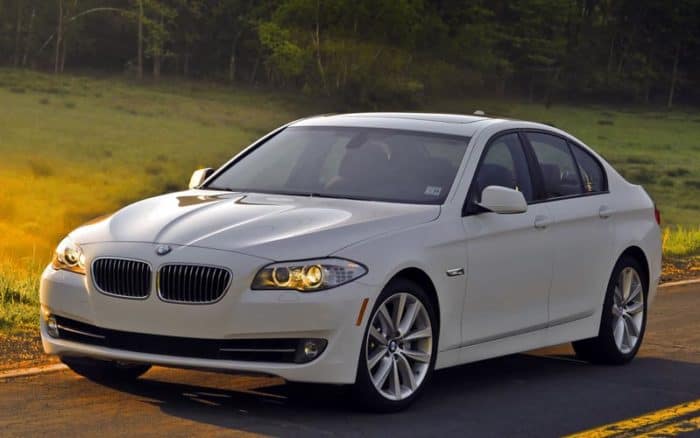 If you have always wanted to hit the road in a luxury vehicle but can’t afford the huge price tag that often accompanies them, finding a used luxury ride is often the best way to slide behind the wheel of a BMW, Mercedes, Audi, or other equally luxurious car.

Finding the best used BMWs is our goal today, and we have found some beauties that are lovely to look at, fun to drive and loaded with luxury. Luckily for you, BMWs depreciate pretty quickly once they leave the lot so it is not that difficult to find a late model BMW at an affordable price point.

Before signing on the dotted line for that new-to-you luxury car, take into account the other costs that come with it. Insurance, maintenance and operating costs will all be more expensive with a luxury vehicle so be sure you can cover those additional costs.

Let’s have a look at the best used BMWs out there.

What Is The Best Used BMW Model To Buy?

If you are after a BMW SUV, this is the model you want. The X3 is a compact SUV that is sporty, fun to drive, and loaded with luxury and convenience features. The 3.0L inline-6 engine produces 260 hp and 225 lb-ft of torque. It is paired to a six-speed manual or a six-speed automatic transmission with manual shift control. All-wheel drive comes standard on all trims. 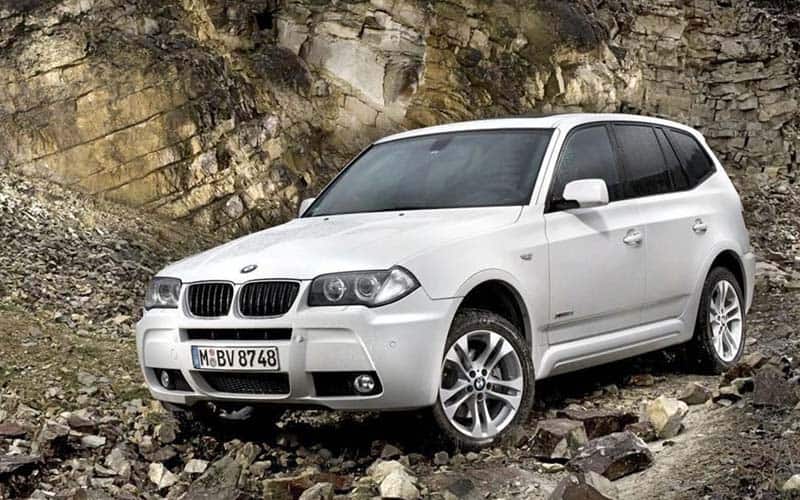 The X3 will also keep you and your family safe out on the road. It was named a top safety pick by the Insurance Institute for Highway Safety (IIHS). Safety equipment includes antilock disc brakes, automatic brake drying, full-length side curtain airbags, front-seat side airbags, stability control as well as hill descent control. 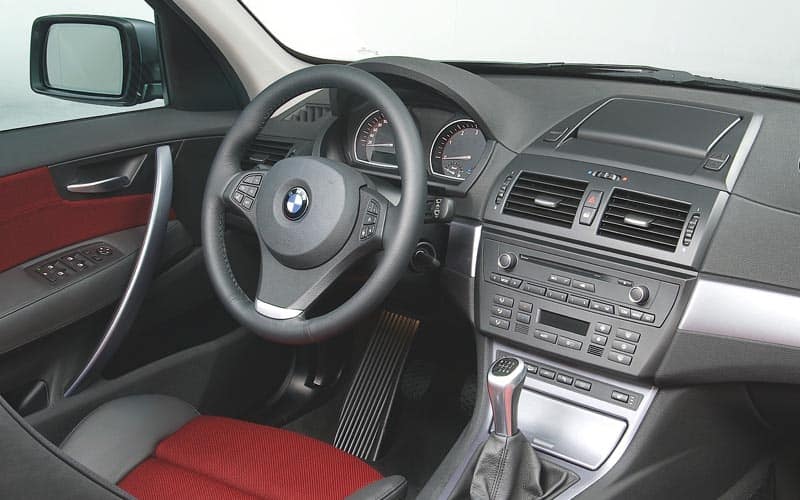 The X3 offers plenty of cargo space, is fun out on the road and pretty affordable for a luxury SUV. Prices vary depending on mileage and packages but expect to spend between $11,000-$16,000. Naturally, if you want a certified pre-owned model with a premium package installed, leather seats, a top of the range navigation system and the like, price tags can be a little bigger than we’ve predicted, but generally you can find an X3 within that budget, which is a bargain compared to new BMW offerings!

The second vehicle on our best used BMW list is the 3 series sedan and wagon. They were redesigned for the 2006 model year while the coupe and convertible were left basically unchanged. While the 3 series is an entry-level Bimmer, it’s still plenty powerful, fun to drive and luxurious. 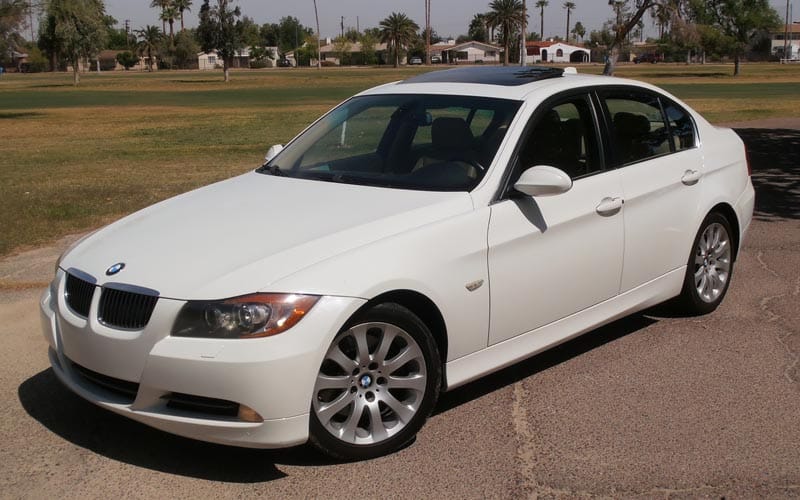 The sedan is available as a 325i or 330i and while they both have a 3.0L inline-six under the hood, the 325i puts out 215 hp while the 330i is rated at 255 hp. As you would expect with a BMW, the interior is filled with tech and convenience features. Automatic climate control, power moonroof, one-touch power windows, automatic headlights, heated mirrors, and keyless entry all come standard. It is possible to upgrade to leather seats, adaptive xenon headlights, active cruise control, parking sensors and active steering. 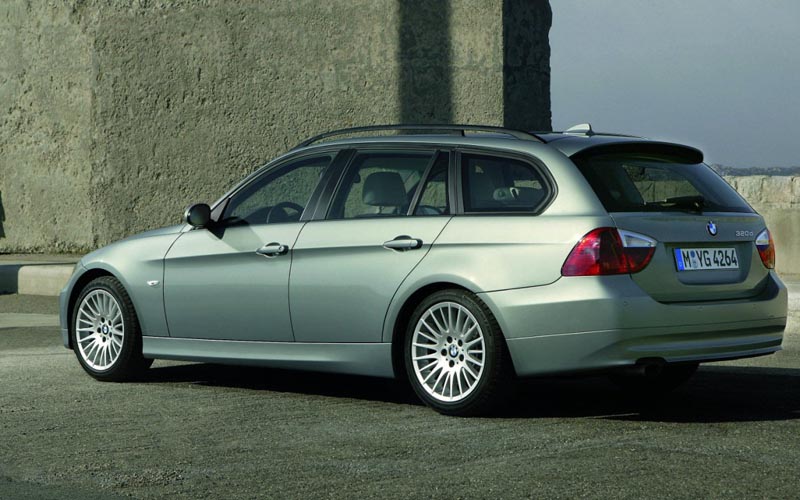 The 3 series was named a top safety pick by the IIHS with four-wheel antilock disc brakes, stability control, and dynamic brake control all coming as standard.

This one is going to push the budget a bit as it is a newer model but the 2013 1 Series received rave reviews and packs everything that is great about the BMW brand into a small package. 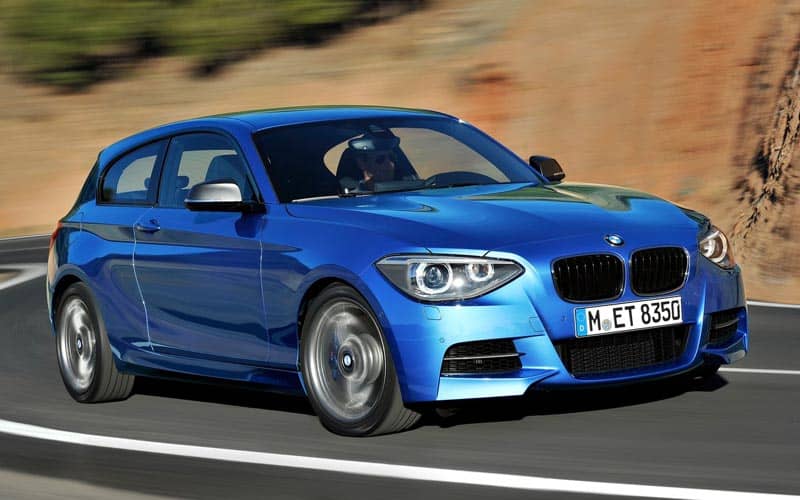 The 1 Series has the same engine as the 3 series, just in a smaller package, which ups the performance and thrill factor. You can choose between three different 3.0-liter inline-6 engines that range from 230 hp all the way up to 320 hp. A six-speed manual transmission is standard equipment but an automatic is optional. 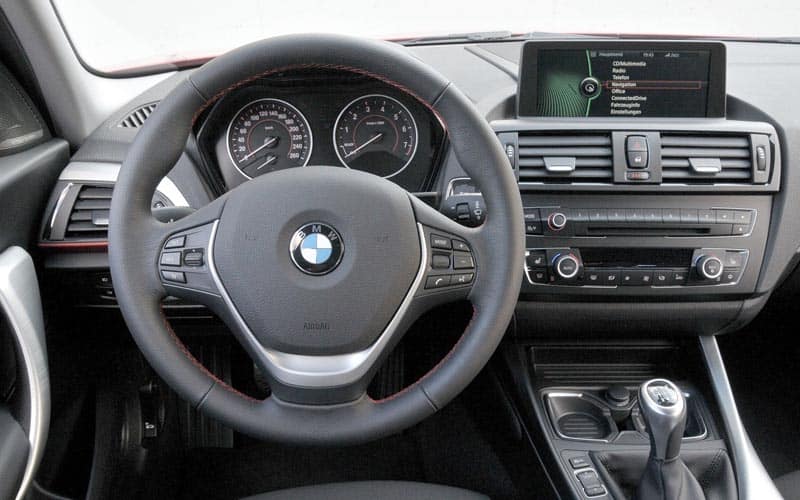 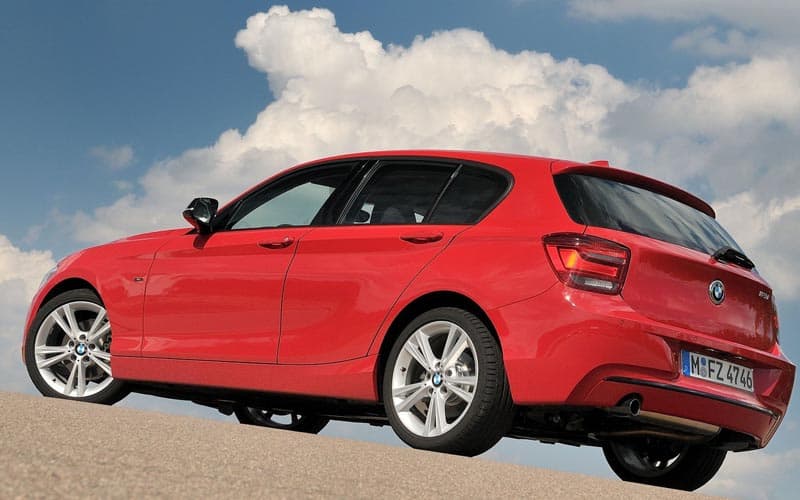 A variety of trims are available on this used BMW selection, the 1 Series is available as a two-door coupe or convertible and available in 128i, 135i and 135is configurations. The 1 Series was not evaluated by either the IIHS or the NHTSA but it is loaded with safety features. Standard safety equipment includes antilock disc brakes, traction and stability control as well as hill-start assist.

If you are looking for a luxury sedan and are willing to sacrifice a bit of sporty performance, the 5 Series will fit the bill. The 5 Series was completely redesigned in 2011 so 2010 models can be a bargain but the years 2010 to 2013 all come highly recommended. 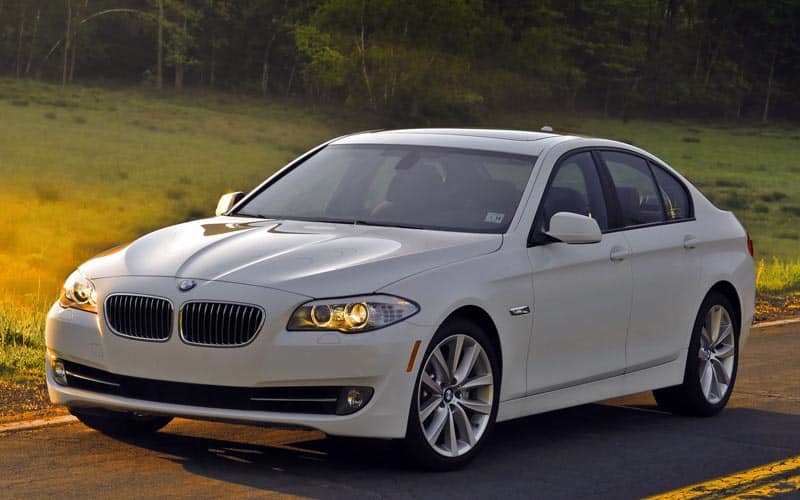 While not as fun to drive as some of the smaller models, the 5 Series is still a serious performer. The base model 528i has a 3.0L inline-6 that puts out 230 hp while the 535i puts a turbocharger on the engine and cranks the horsepower up to 300. The big boy 550i gets a 4.8-liter V8 and 360 hp. A six-speed manual is standard with an automatic being optional equipment. 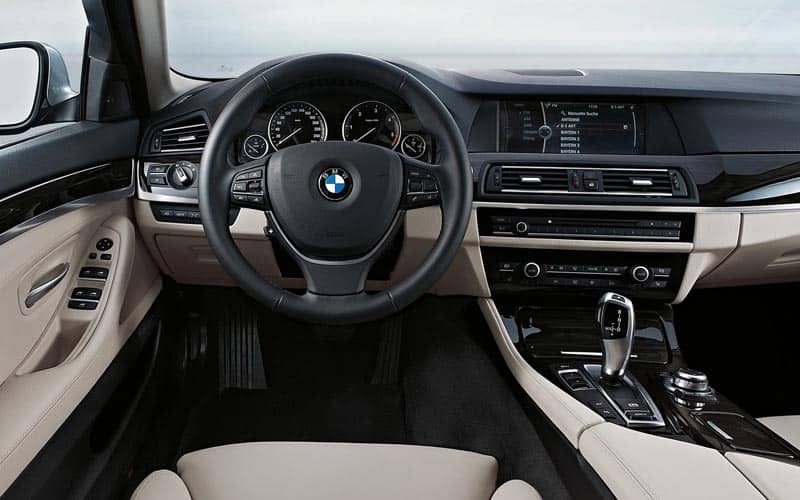 The 5 Series is packed with safety features. Antilock disc brakes, stability control and front and rear side curtain airbags all come standard. An optional lane -departure warning system will alert the driver if the car veers out of its lane. A night vision system is also optional and displays hazards that are outside of the headlights range.

If you’re looking for a combination of luxury and great power, the 7 series may be the best used BMW for you. This is the top of the line when it comes to large luxury BMW sedans. Luckily for you, due to their high cost, they also depreciate the quickest, making the 2008 model year an affordable used BMW choice. 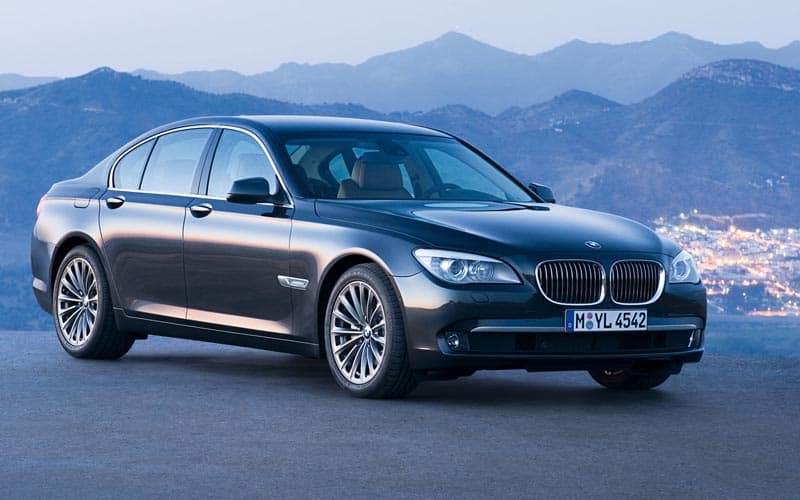 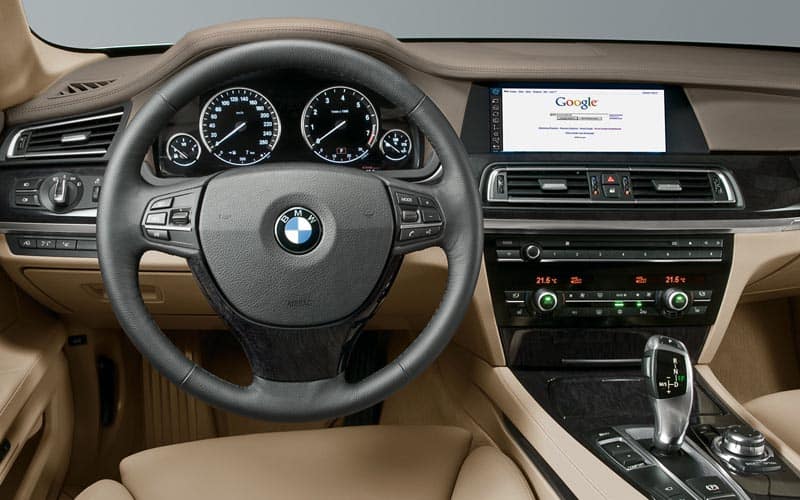 The 7 Series was not rated by the NHTSA or the IIHS, but as you would expect, it has plenty of standard safety features, including antilock disc brakes, front and rear parking sensors, stability control, front-seat side airbags, driver’s knee airbag, and a 4-year subscription to BMW Assist telematics.

The cost of driving a used luxury car doesn’t stop with the purchase price and it’s always a good idea to fully understand the additional costs. Here are a few things to consider when shopping for a used BMW or other luxury car:

Cost of repairs – Luxury cars are filled with technology and complicated electronics, which can be expensive to fix. In addition, even routine maintenance on these types of vehicles tends to be more expensive. Consider the cost of regular upkeep on the car before buying it.

Cost of insurance – Despite the fact that the car has depreciated, it will still cost quite a bit to repair if you are in an accident, which is why insurance will be more expensive. Engine size also plays into insurance cost so if you are driving a 7 Series with a V12 expect to pay significantly more for insurance. Get an insurance quote on any luxury vehicle before purchasing it.

Fuel – A V12, and even the V8s will gulp fuel so be sure to take into account operating costs when shopping for a used luxury vehicle.

Depreciation – While you are benefiting from the massive depreciation that takes place with luxury vehicles, it won’t stop once you park it in your driveway. Remember that a used luxury vehicle will depreciate quicker than a normal sedan.

When you’re looking for a pre-owned BMW, keep your options open. From the likes of the 4 Series Gran Coupe to the BMW 328i xDrive Sedan, to older models like the sensational 7-Series bad boys from the 90s, there’s plenty of bargains to be had. However, remember that BMW does enjoy higher maintenance costs than many other manufacturers, and the more modern vehicles with dedicated cold weather package systems, or an advanced driver assistance package, or a top of the range sport package, will cost more to service in the long run. If you’re planning on buying pre-owned vehicles, make sure you do the research on your desired model, learn what problems are likely to come up, and what to look out for. If you do the research, you’ll drive away having scored an excellent bargain.