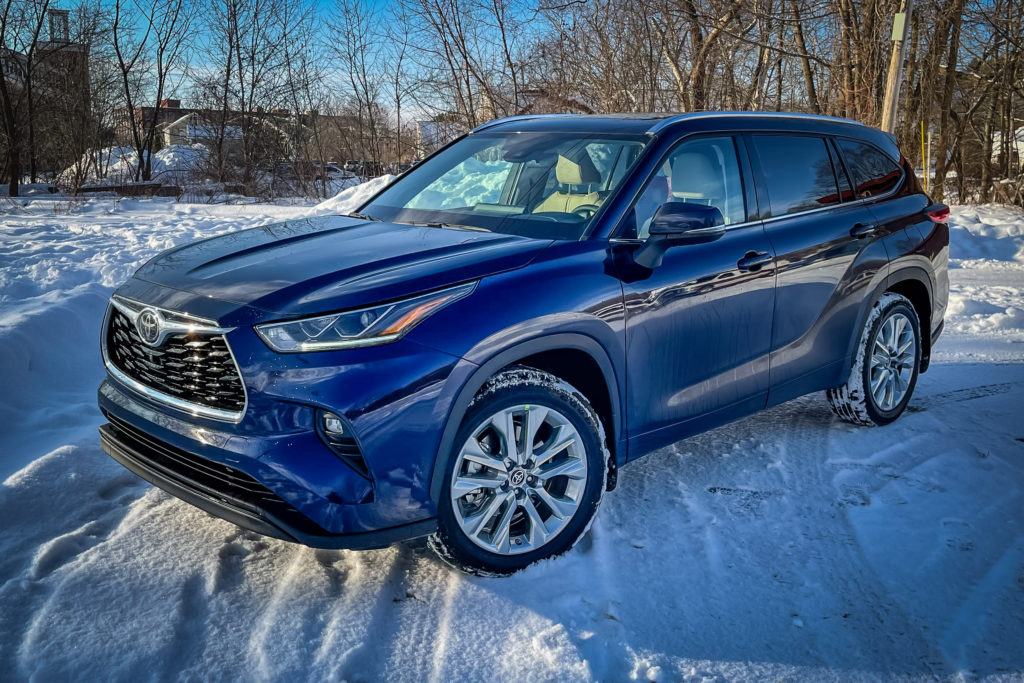 Testing vehicles with kids in tow is an interesting experience. Some show up with two doors or only two seats, while others could haul my two kids and all of the neighbors at the same time. The latter was the case with the 2021 Toyota Highlander Limited that I recently tested. While its ability to carry families is admirable, the real surprise of the week was its ability to easily navigate a heavy Northern New England snowstorm. 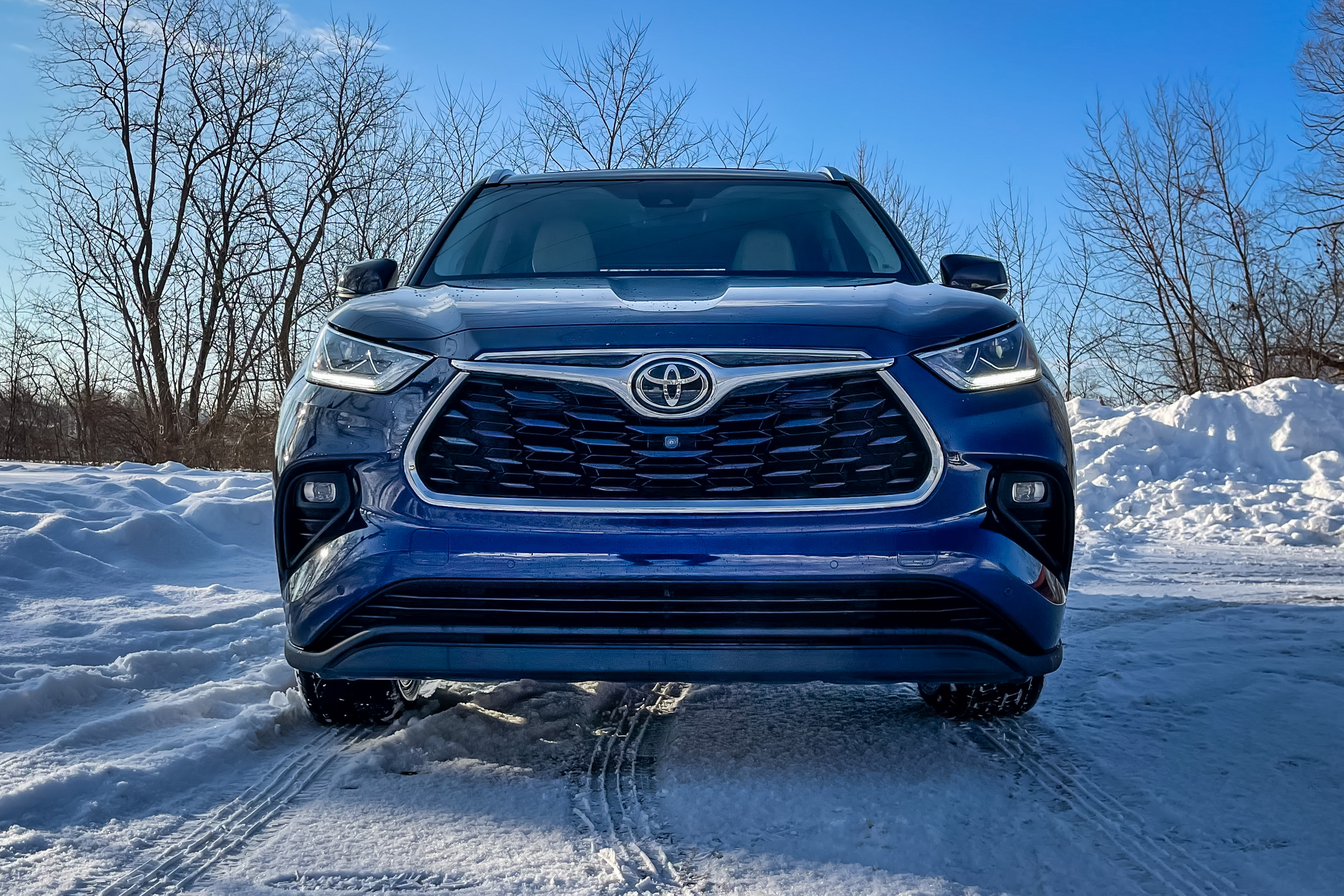 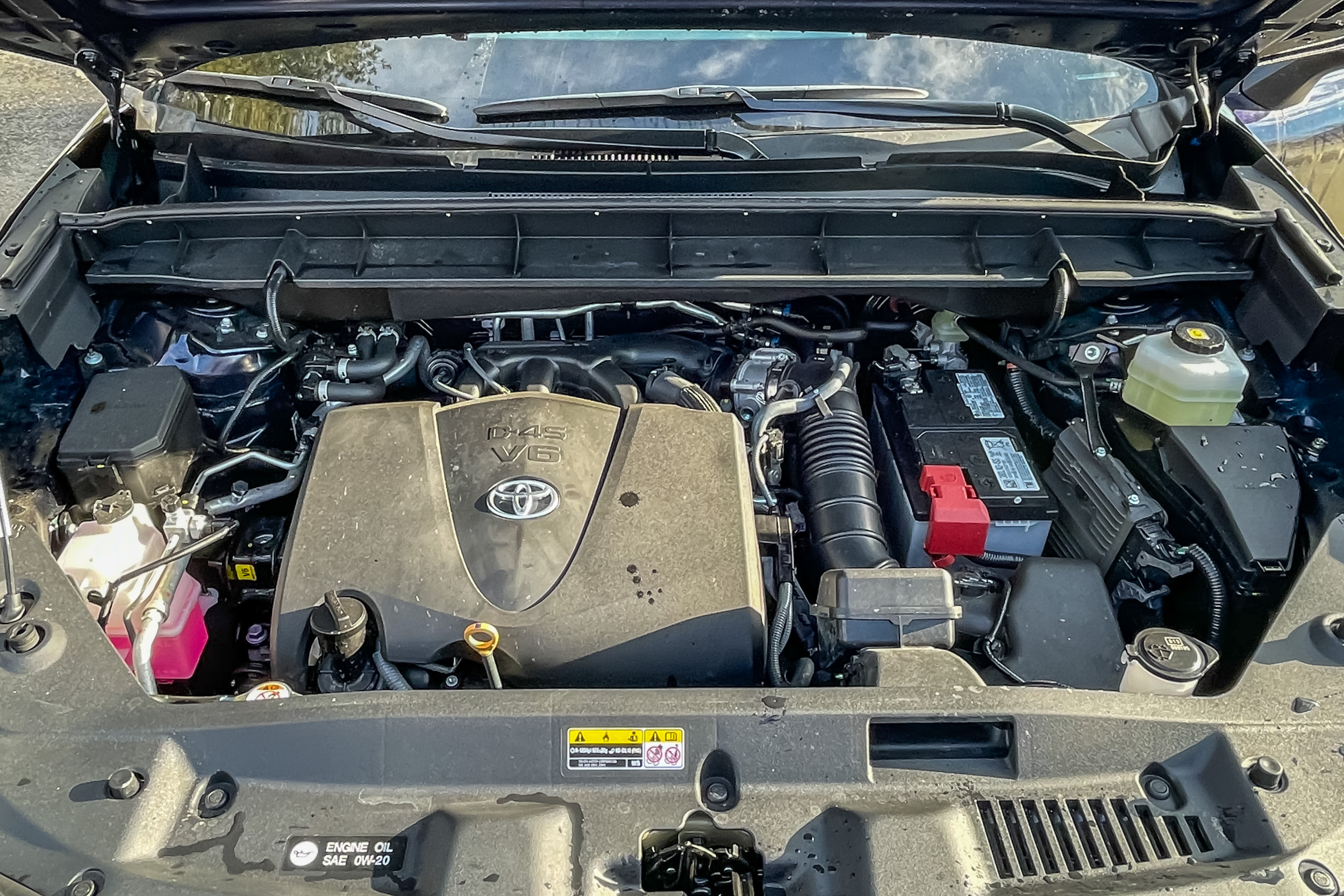 My test vehicle came with a 3.5-liter V6 that produces 295 hp and 263 lb.-ft. of torque. It’s paired with an 8-speed automatic transmission. Front-wheel-drive is standard, but my tester came with the optional all-wheel-drive system. Those aren’t sporty numbers, and they don’t have to be, but there’s more to the Highlander’s driving experience than specs on paper.

The V6 powertrain is smooth, and while it provides ample power to motivate the 4,450-pound Highlander Limited AWD. There’s a quiet refinement from the powertrain that isn’t often seen outside of vehicles from premium brands.

Toyota also offers the Highlander with a hybrid powertrain that uses a 2.5-liter four-cylinder engine and electric motors to deliver a combined 243 hp and fuel economy of up to 35 mpg combined. That’s a significant improvement over the standard V6 in our test vehicle, which the EPA estimates will do 23 mpg combined. Even so, the standard gas-powered Highlander edges past its main rival, the Honda Pilot, by one mpg in combined fuel economy estimates. It’s also important to remember that Honda doesn’t currently offer a hybrid system for the Pilot. 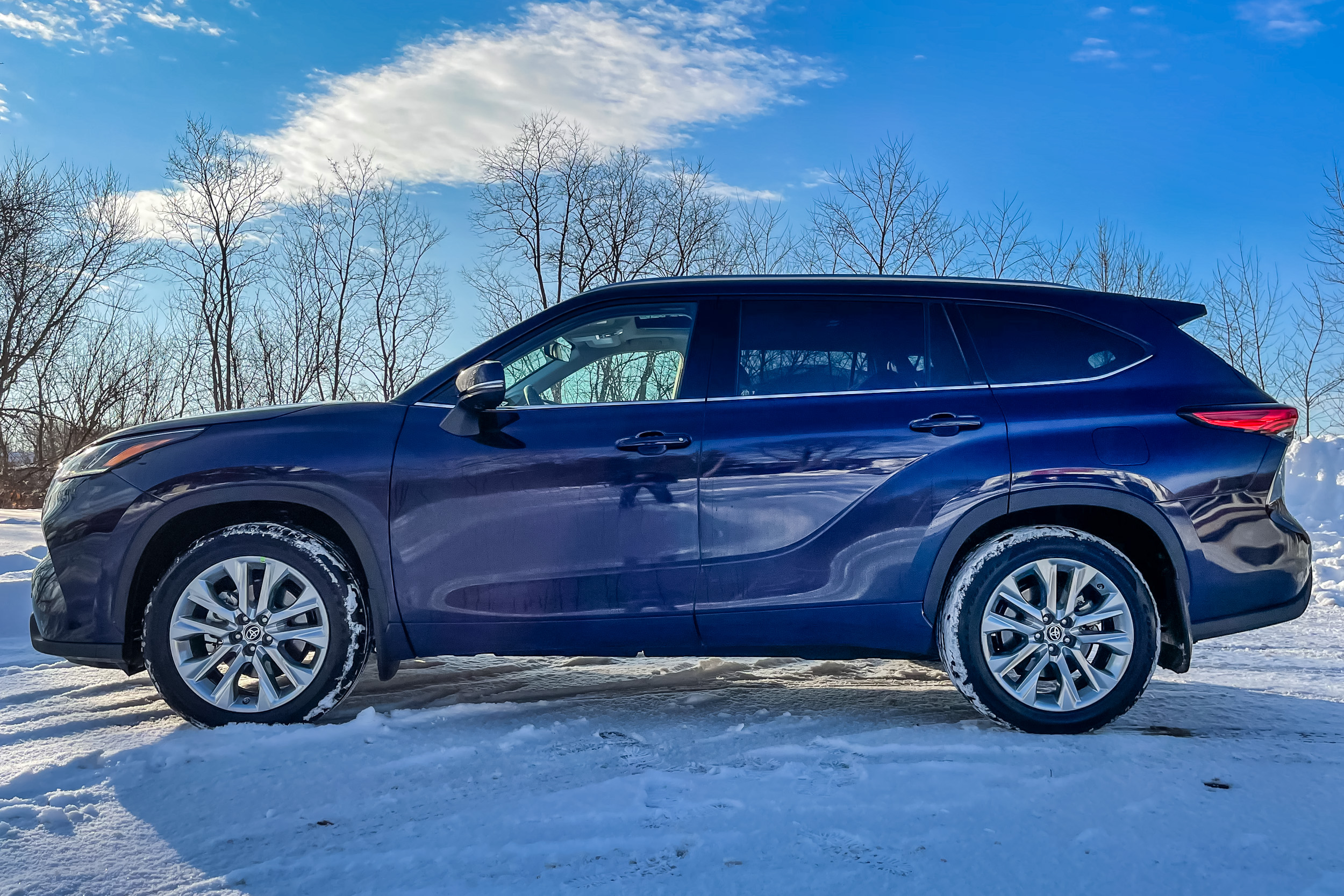 The optional all-wheel-drive system is split into two distinct systems, depending on the trim level selected. Highlander L, LE, and XLE trims come with a system that can shift up to 50-percent of the engine’s power to the rear wheels when a loss of traction is detected. That’s pretty standard stuff, but the XSE, Limited, and Platinum trims get a more advanced all-wheel-drive system that can not only shift power to the rear wheels but also uses torque vectoring to route power to the individual wheel that needs it most.

In sporty all-wheel drive cars, torque vectoring can help pull off amazing feats of handling and acceleration, but in crossovers and SUVs, it mostly serves to greatly improve off-road and bad-weather stability and performance. I got a taste of that first-hand when my region in Midcoast Maine received a foot-plus of snow in just a few hours.

Snow drifts and even knee-deep powder present zero challenges for the Highlander with the advanced all-wheel-drive system, though the real benefits don’t become apparent until the vehicle is on the road.

Over time, some of our back roads in Maine develop a “lean,” where the outer edge of the lane is noticeably lower than the center. In good weather, this is a little annoying, but nothing to worry about. In snow, the lower portion of the road can end up pulling the vehicle to the outer edge of the paved surface and eventually into the ditch. The Highlander’s torque vectoring system works against those forces, and it’s actually possible to feel the vehicle figuring out its position and churning different wheels to stay true.

If you don’t live where the air hurts your face for a significant portion of the year, the Highlander offers a serene ride and excellent, confidence-inspiring steering and brakes. There’s a feeling of isolation, even when traveling over rough, broken pavement, and the ride remains so compliant in most scenarios that even a lightly-sleeping four-year-old’s nap ride wasn’t interrupted by the bumps. 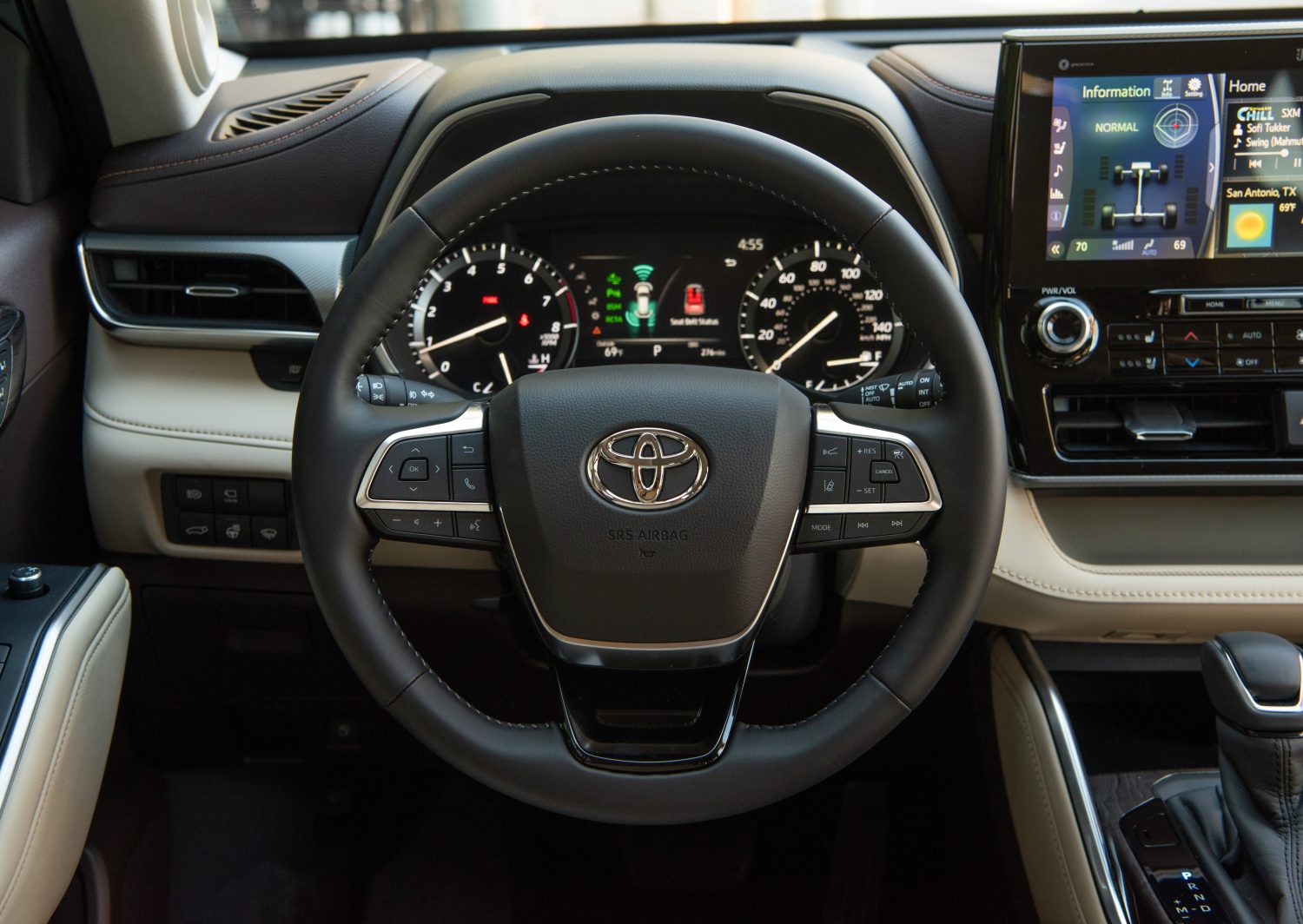 The Highlander’s interior is generally a nice place to spend time, especially in higher-trim models, but there’s so much going on that it’s hard to soak it all in. The steering wheel houses some 13 different buttons, while drivers have to rely on a mix of physical and on-screen controls to manage climate and infotainment settings. This doesn’t sound like a huge problem, and it isn’t, but the amount of time needed to find the right button for the desired function takes the driver’s attention away from the road ahead. A better solution might be to move all climate controls to physical buttons and leave infotainment and vehicle settings to on-screen controls. At the very least, displaying one function at a time instead of several would be much less distracting. 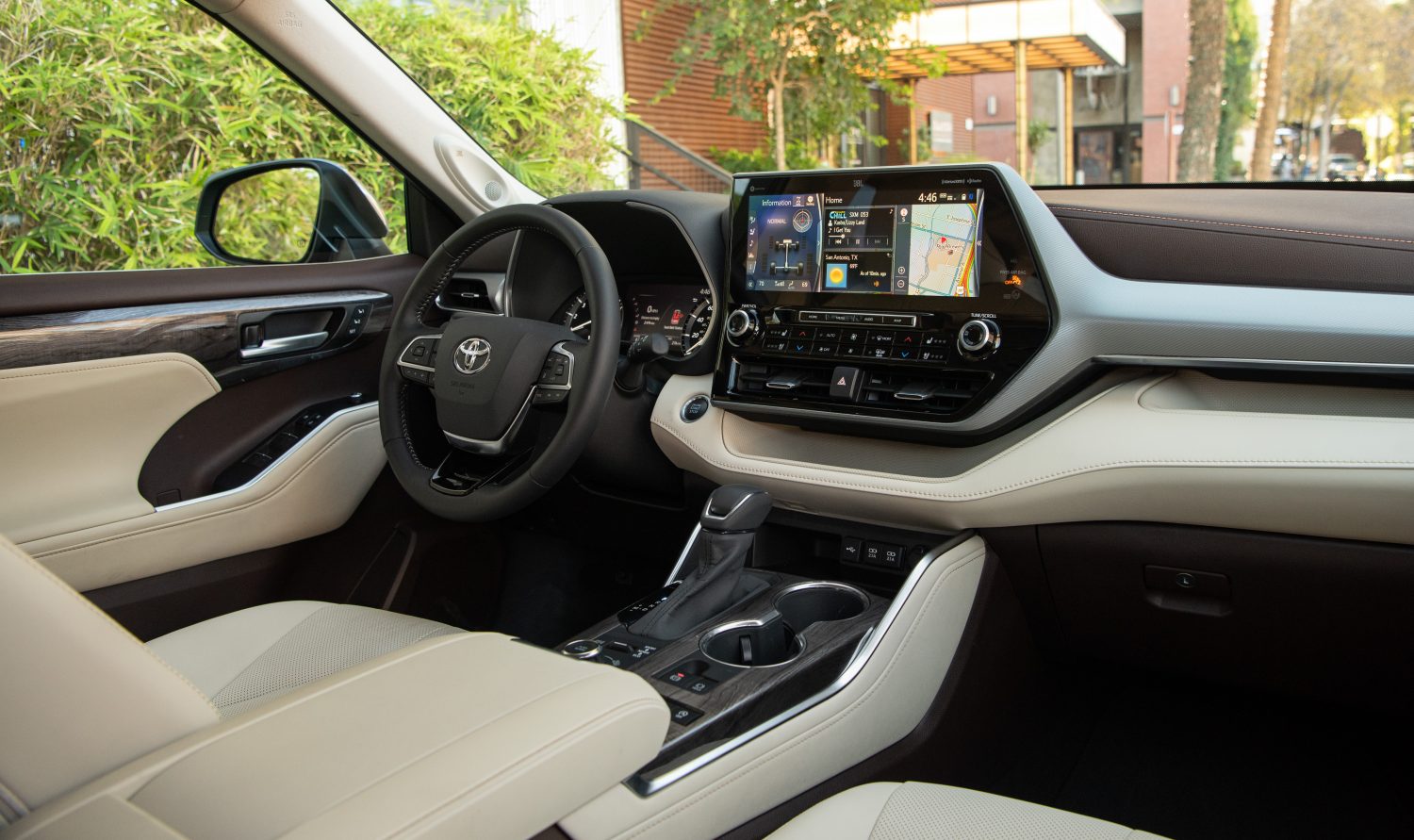 Despite the learning curve required to use the controls, the Highlander Limited trim’s interior is gorgeous and finished with a blend of high-end materials and clever storage spaces that make the Toyota a family-hauling wonder. Gorgeous contrasting leathers, plastics, and metals come together in interesting angles that appear both classic and future-forward. Toyota has also achieved an impressive level of noise suppression inside that is not often seen outside of vehicles from premium brands, like its luxury brand Lexus. 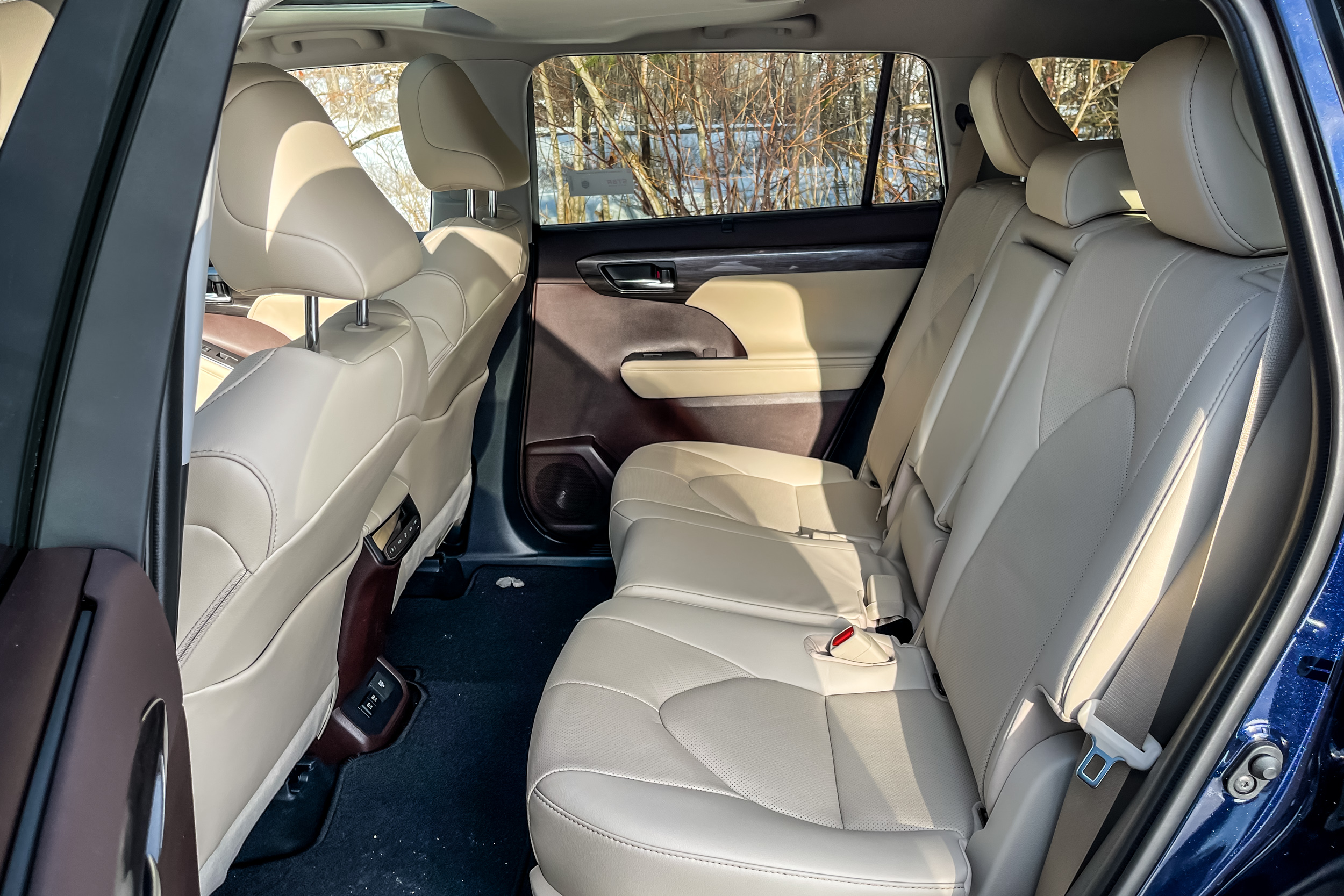 The Highlander Limited gets 7-passenger seating with second-row captain’s chairs as standard equipment, but there’s is an option to bump that to 8-passenger seating with a second-row bench, which is the setup that came in my test vehicle. With two kids in tow, captain’s chairs put just enough daylight between the seats to keep the peace – think of it as your own mobile demilitarized zone. For my family, the captain’s chairs work best, but your mileage may vary, especially if you need to carry more people. Unsurprisingly, the third row is best reserved for children and even then is only really practical for short trips. 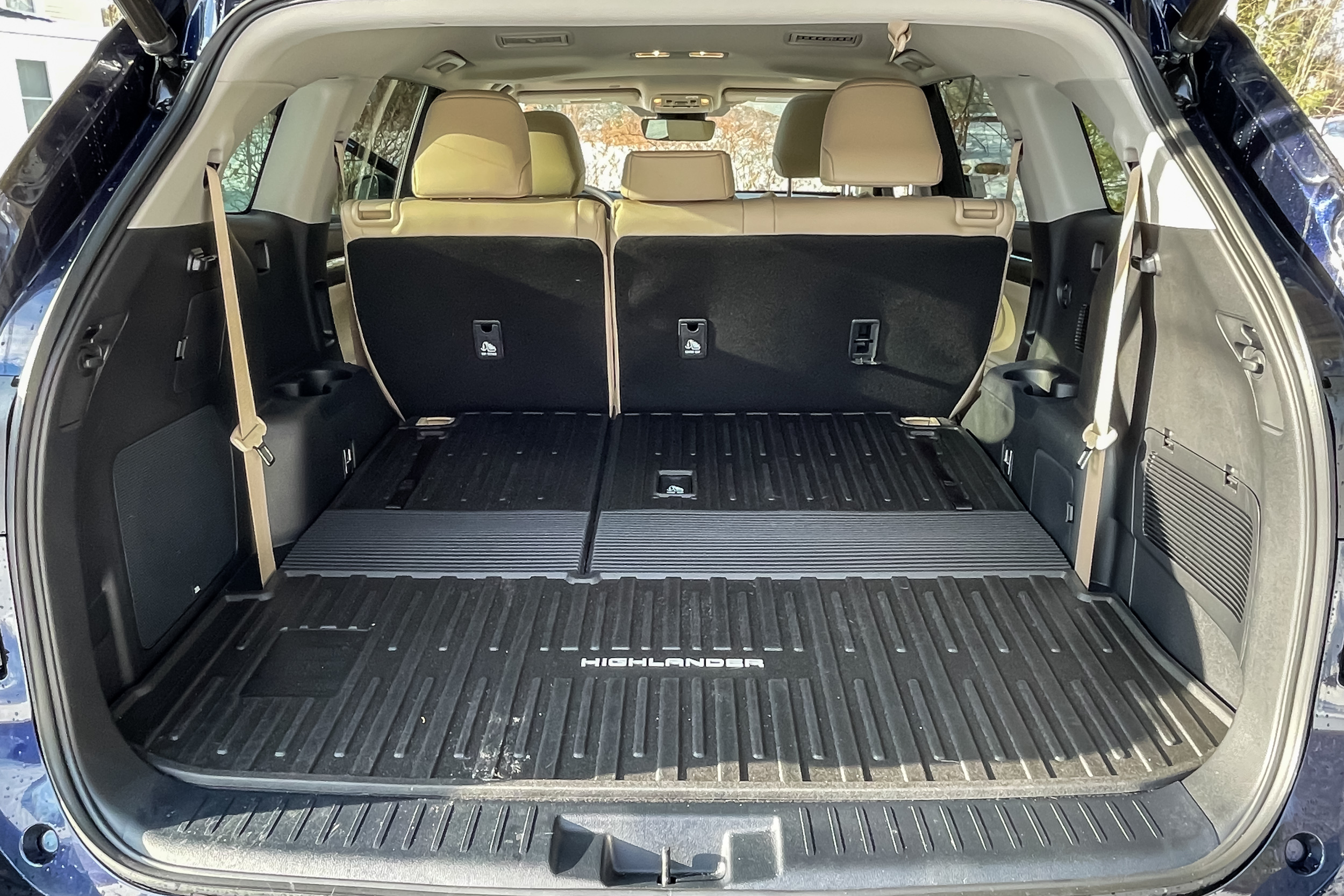 Cargo space has long been a strong selling point for Highlander buyers, and that hasn’t changed for 2021. With the third-row seats upright, there’s a paltry 16 cubic feet of space, but that opens up to a generous 48.4 cubic feet with them folded flat. With both the second and third-row folded down, there’s a cavernous 84.3 cubic feet of space. It’s worth noting that the standard captain’s chairs leave a space in the middle, through which cargo can slide if it’s not secured properly. 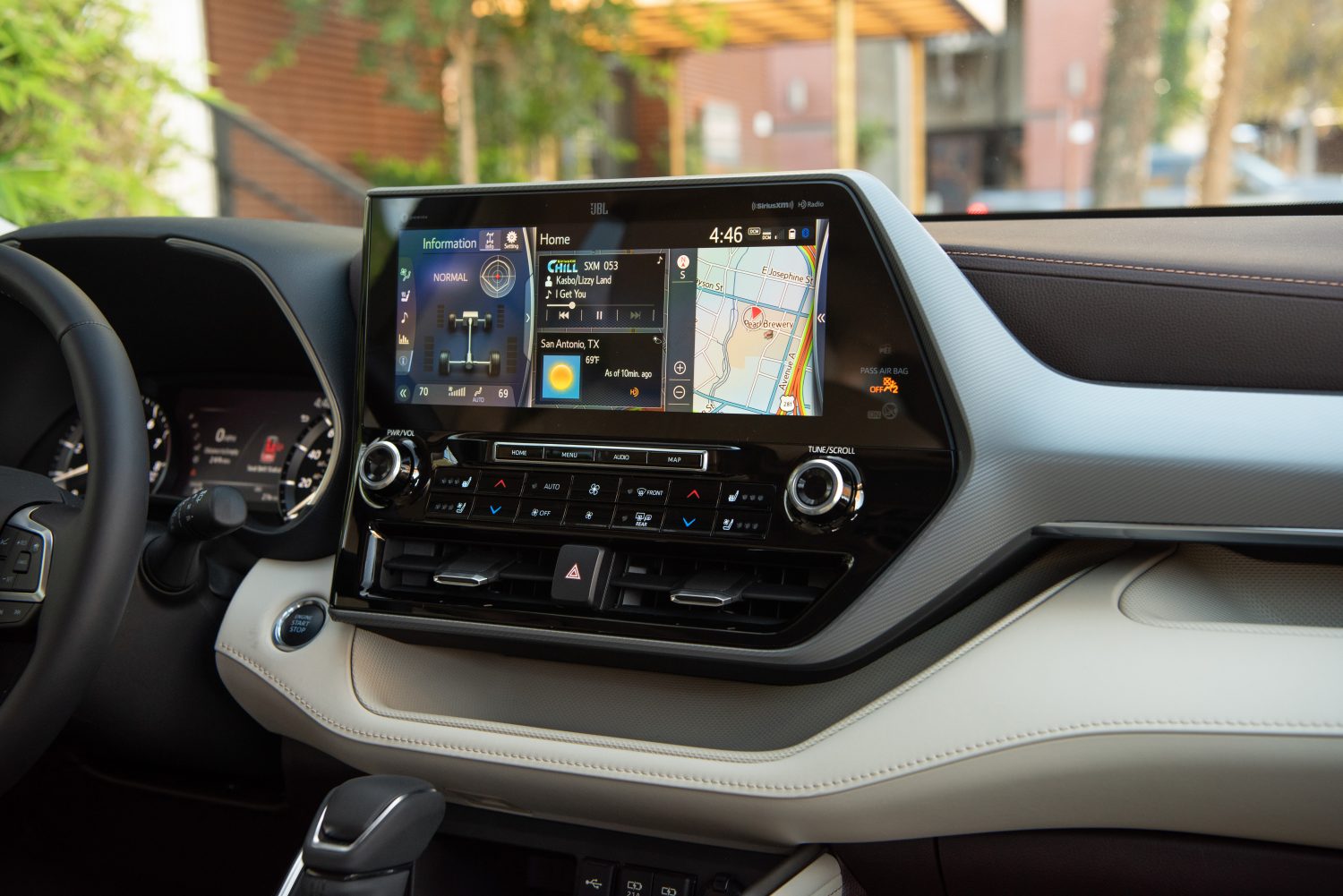 Toyota’s infotainment software has been improved by leaps and bounds in recent years, but it’s still more complicated than it needs to be. The large 12.3-inch screen that comes in Limited and Platinum trims looks great and is responsive, but it’s let down by a busy interface. All of that extra screen real estate opens up the ability to display two or more functions at once, but most people will be happier using the standard Apple CarPlay or Android Auto interfaces. The screen is large enough for climate controls to pop up on either side of the smartphone interface, but it’s hard not to think that operation would be simpler with one thing going on at a time.

The available 11-speaker JBL sound system is more than loud enough to jam Disney tunes across all 3-rows, and the audio quality is excellent. The audio system clarity is enhanced thanks to the Highlander’s strong sound insulation, which removes much of the outside road and wind noise from the cabin.

Thanks to a host of standard advanced safety tech, the Highlander received top crash-test scores from both the National Highway Traffic Safety Administration (NHTSA) and the Insurance Institute for Highway Safety (IIHS). The Toyota earned a 5-star rating from the NHTSA and a Top Safety Pick Designation from the IIHS. Every Highlander gets automatic emergency braking, lane departure alerts, blind-spot monitoring, and rear cross-traffic alerts. 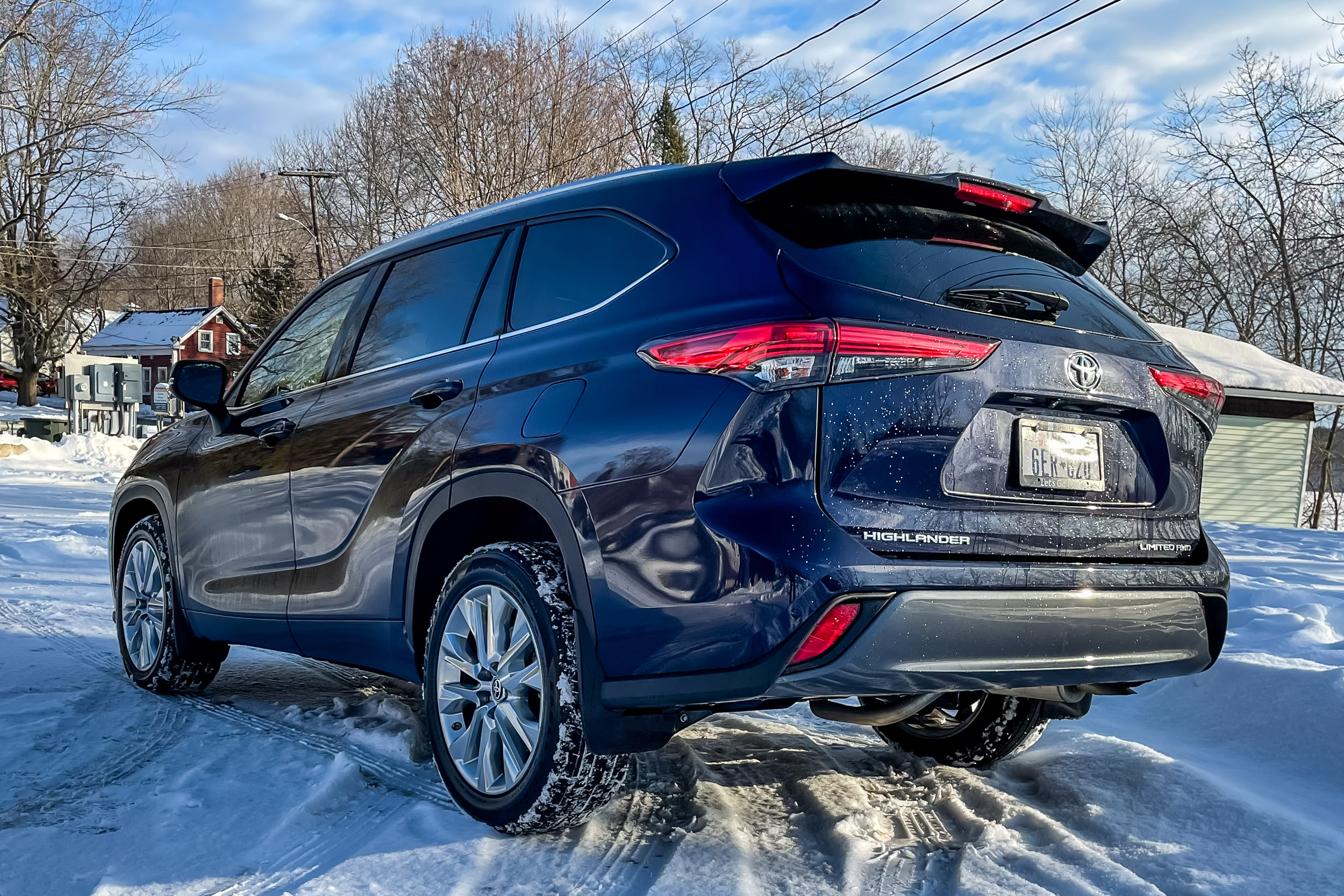 Depending on how you order it, the 2021 Toyota Highlander can become quite expensive, although prices start at about $35,000. With a few key options, such as the larger touchscreen and all-wheel-drive, my Limited test model landed just shy of $48,000, after the $1,175 delivery charge. Even so, Toyota’s pricing is competitive within its segment, and can even be considered a value when compared against vehicles like the Honda Pilot, whose price can reach over $50,000 in certain configurations.

Additionally, it’s hard to imagine a more appropriate family companion that isn’t a minivan. No matter how you spec it, the Highlander will be a solid member of your clan and can manage some nasty weather along the way.

Configure and price out your own 2021 Toyota Highlander HERE.