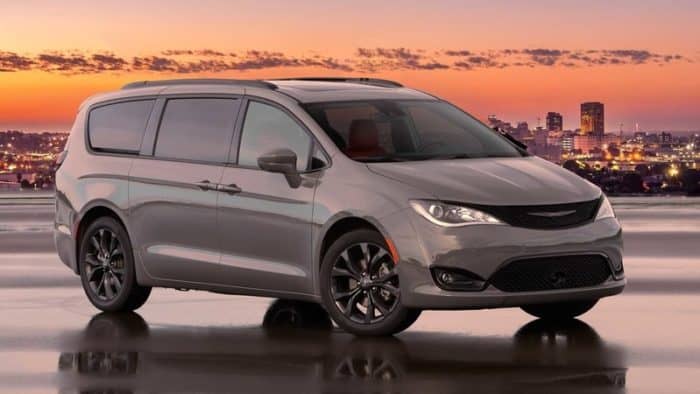 Although still not at the all-time low, Chrysler’s sales have taken a plunge in a last few years. With 165,964 units delivered in 2018, one of two FCA’s namesake brands now exhibits a market share of under 1 percent. 2019 results are even more grim, and with once-deep lineup of universal models now consisting of only two vehicles, future doesn’t look that bright for the luxury brand. What does the 2021 Chrysler lineup have in store for us? Find out below.

Speaking of Chrysler’s future, the FCA has been conducting its own electrification strategy for a while now. Their $10.5 billion plan is already bearing fruit in the likes of Jeep Wrangler and Ram 1500 with mild-hybrid systems but no fewer than 30 nameplates are expected to receive some sort of an electrified powertrain by the end of 2022. Needless to say, Chrysler models are expected to benefit from it as well and the Pacifica plug-in hybrid won’t remain their sole electrified offering for long.

Furthermore, it would seem that FCA is also shopping for EV tech from other sources aside from developing their own. As The Verge reports, FCA representatives are in negotiations with less successful EV companies and startups like Faraday Future and Seres about leveraging their own technology. This could potentially help the FCA realize their plans sooner than expected or at least give them more possibilities going forward. It’s still too early to speculate about this plan’s connection with the Chrysler brand itself, however. One thing is certain though; future Chrysler vehicles will benefit from company’s electrification plans, one way or another.

Although they find themselves in precarious situation, Chrysler uses the Pacifica minivan to showcase they’re still capable of putting a stylish, well-executed, capable, and practical vehicle to the market. The Pacifica is all that and more as it represents arguably the best vehicle in the dying class currently available on the U.S. market.

The most contemporary minivan on the market hasn’t been restyled since its introduction back during MY 2017 and the 2021 models provide more of the same. It’s a widely known fact that minivans enjoy a longer cycle than sedans or crossovers, plus Chrysler’s minivan already looks great. Aside from simplified trim levels, the newest Pacifica models also offer couple of appearance packages: S Appearance and Red S Appearance. The former provides a blacked-out look while the latter brings a unique interior theme with red leather and grey piping.

The new entry-level Touring trim now starts from $35,000 which is somewhat steep but don’t forget that the Pacifica is a borderline luxury car. Moreover, Chrysler will offer you a more affordable version of the minivan which now goes under the Voyager name. More on that later. At the other end of the price scale, the Pacifica Limited warrants $46,000. For that amount, you get everything from leather upholstery, over full array of safety features, to an integrated vacuum cleaner. There’s still plenty of room to make the youngest FCA minivan even more expensive as a rear seat touchscreen entertainment system and a 20-speaker Harman Kardon premium sound system come as optional equipment.

Meanwhile, blind-spot monitors, rear automated emergency braking, and rear parking sensors are all standard across the Pacifica range. An optional Advanced SafetyTec Group package can be ordered with every trim level and further provides adaptive cruise control, active lane control, active parking assist, and a surround-view camera. The NHTSA has given the Pacifica minivan five stars overall, while the IIHS gives it the coveted Top Safety Pick award.

The ingenious Stow ‘N Go system allows the seats to be engulfed by Pacifica’s floor, but only on gasoline-powered models as hybrids already use that space for their batteries. This gives the Pacifica up to 140.5 cubic feet of storage space with all seats but the front ones down, or 32.3 cubes with all of them up. Not exactly class-leading figures, but they should be more than plentiful for most people.

Both the conventional and hybrid models utilize the same 3.6L V6 engine for motivation. The former generate 287 horsepower and send them to the front via a 9-speed automatic transmission. The Chrysler Pacifica hybrid pairs the engine with a 16-kWh lithium-ion battery pack and two electric motors but still makes only 260 ponies out of the setup. Naturally, the hybrid models more than make up for the lack of power by providing up to 30 all-electric miles and up to 30 miles to the gallon combined or 82 MPGe. The conventional models are rated at 22 mpg combined.

The 2021 Chrysler Pacifica might be carrying over basically unchanged since 2017, but it’s still the freshest player in what appears to have become a somewhat stale segment. While their range of models is definitely lacking, at least Chrysler nails it with their most important vehicle at the moment. 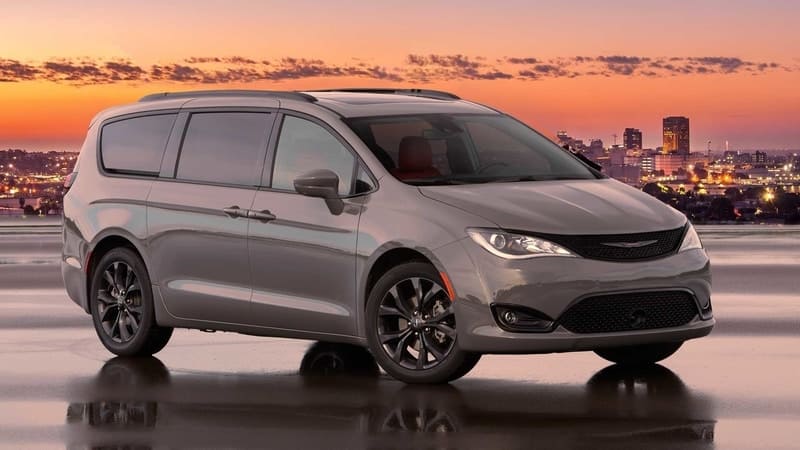 The Voyager nameplate marks its return to the U.S. market after years of absence but the new Voyager is actually nothing other than what used to be the entry-level Pacifica in L and LX grades. The Voyager lineup is also joined by an all-new LXi trim level which will be exclusively offered to fleet buyers. Prices start from just under $29,000 for the L trim, $31,300 for the LX, and $34,500 for the range-topping fleet-only LXi models.

Much like its role model, the Voyager too carries over into 2021 without any major changes. After all, it was all-new for MY 2020. The lower price point might be the Voyager’s strongest point but families buying one must know they’ll be deprived of some features otherwise available with the more expensive Pacifica. Stow ‘N Go seats immediately come to mind, but aren’t the only Pacifica-exclusive feature. The Voyager also makes do without power-sliding side doors, built-in vacuum cleaner, and luxuries such as leather upholstery. It has to be said that the Stow ‘N Go system comes as an option and is even standard with the fleet-exclusive LXi models.

Although the Voyager does get a five-star NHTSA rating, it fails to provide as many advanced safety features as the more expensive Pacifica. Only blind-spot monitors and rear parking assist are available, and by available, I mean they’re optional.

Only one engine can be ordered across the Voyager lineup as hybrid powertrain is exclusively limited to the more upmarket of two Chrysler minivans. A 3.6L V6 is good enough for 287 horsepower and gets the same 9-speed automatic gearbox as it is the case in Pacifica.

Although differences between the Pacifica and Voyager are almost non-existent, the second minivan does make sense for Chrysler at this particular time. Their lineup has dried up and even a desperate move at fielding additional models such as this one has to be welcomed with open arms. At least until the namesake FCA brand decides to field a proper alternative model. 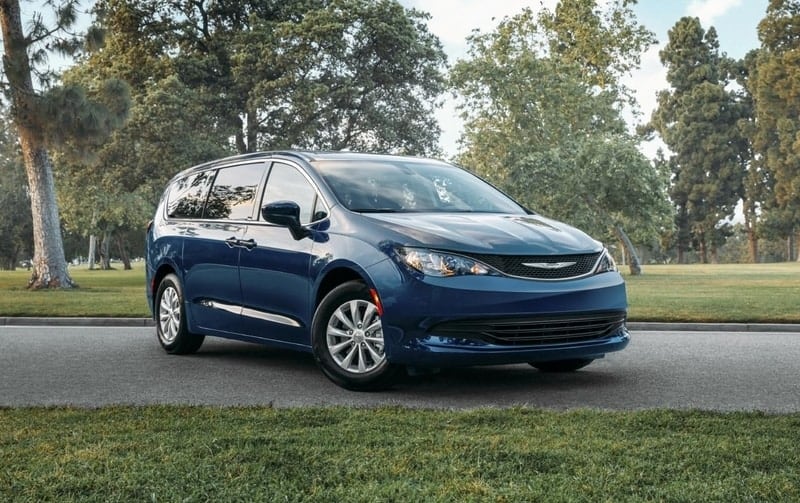 A number of sedans has disappeared from the U.S. market for MY 2020 but what was dubbed the likeliest candidate for discontinuation, actually remains alive and well. The Chrysler 300 is now seriously outdated considering it hasn’t been properly updated throughout the decade, but FCA has little room for navigation. With Chrysler’s lineup being as shallow as it is, the luxury sedan soldiers on for a while yet.

Despite the fact it dates back to 2005 and very much resembles its now-distant predecessor, the current 300 is still considered stylishly executed. The all-new Red S Appearance package with 20-inch Black Noise wheels on the outside and red leather upholstery on the inside joins the lineup. The 300 starts from just north of $30,000 but the Touring trim level doesn’t offer that much in terms of luxury features. It even comes with cloth seats but at least the Apple CarPlay and Android Auto integration are standard. Opt for the $44,000 Chrysler 300 C and you’ll get a much better appointed package which includes quilted leather and wood trim, heated and ventilated front seats, and a moonroof.

Being as old as it is, the 300 doesn’t offer much in a way of advanced driver’s aids. Automatic emergency braking, blind-spot monitors, lane-keeping assist, and adaptive cruise control are offered at extra cost, however.

There are two engines to choose from when it comes to the Chrysler 300. Most models will be fitted with a 292-horsepower 3.6L V6 (300-hp in the sporty S trim) but those in need of more get the chance to opt for a 5.7L V8 which is rated at 363 hp and 394 lb-ft of torque. Rear-wheel drive is standard across the board but the base V6 can be ordered with an optional all-wheel drive. Both engines pair with Chrysler’s 8-speed automatic transmission.

The Chrysler 300 is largely overlooked for multitude of reasons. For starters, it’s not the sharpest and most advanced of sedans on the market. The fact it’s a sedan also doesn’t work in its favor. Finally, the fact it still rides on the same underpinnings as its 2005 role model is downright inexcusable in the auto industry today. Yet, the large sedan soldiers on and refuses to go. The FCA will likely put it out of its misery in the next year or two with no intention of bringing it back whatsoever. Instead, the Chrysler brand is expected to finally utilize a crossover model but that’s a story for another time. 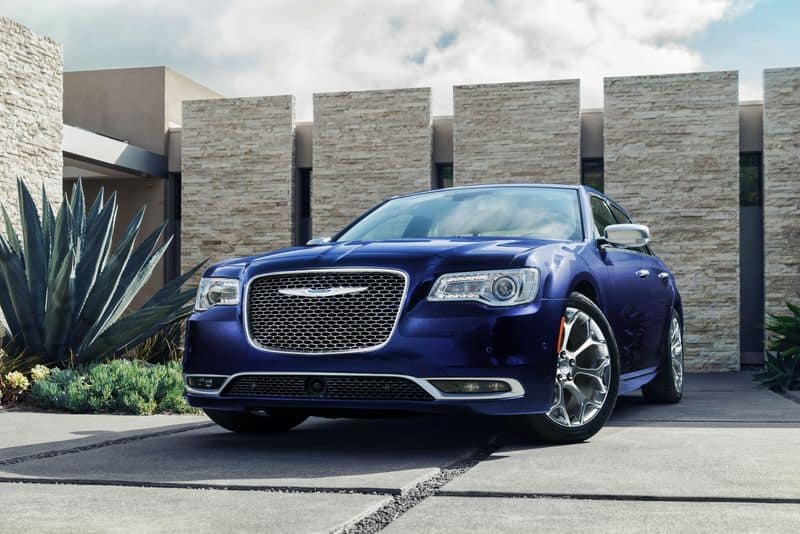 
European Union Proposes Aggressive Emissions Cuts by 2030
The Best From Chrysler in 2020
10 Fastest Camaros of All Time (And 5 Slowest)
Driven: 2021 Aston Martin Vantage Roadster [Review]
10 Iconic British Sports Cars
10 of the Most Powerful American Cars Ever Made