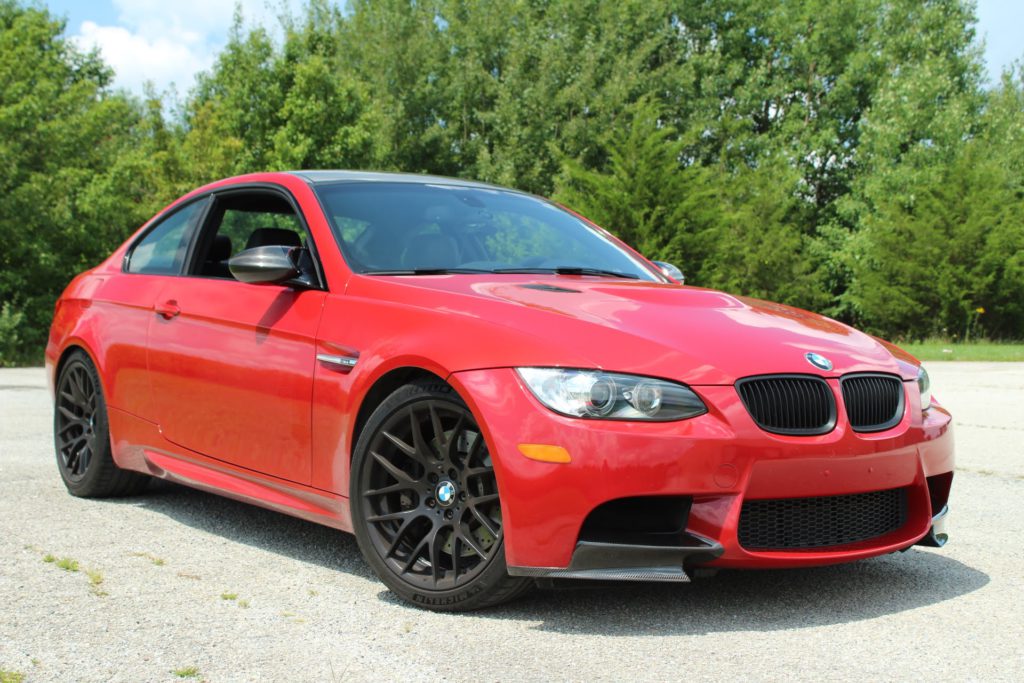 I have been the owner of a 2012 BMW E92 M3 Competition Package since February 2016. I like to joke that it is my muse for automotive content. It has been featured on the front page of many popular automotive sites. It is even the first M3 you see in the Google Search image results for an E92 M3. I have put a bunch of parts on this thing. After over 4-years of accumulating BMW E92 M3 knowledge, I thought there was only one thing I could do — share it with you.

I am going to take you through all of the typical mods on the E92 M3, what options people normally prefer, and what route I took or would take in modifying my own BMW E92 M3.

(Note: All these mod suggestions will, for the most part, work for the sedan E90 M3 and the convertible E93 M3. However, I own an E92 M3 and will be speaking about the parts from the perspective of an E92 owner.) 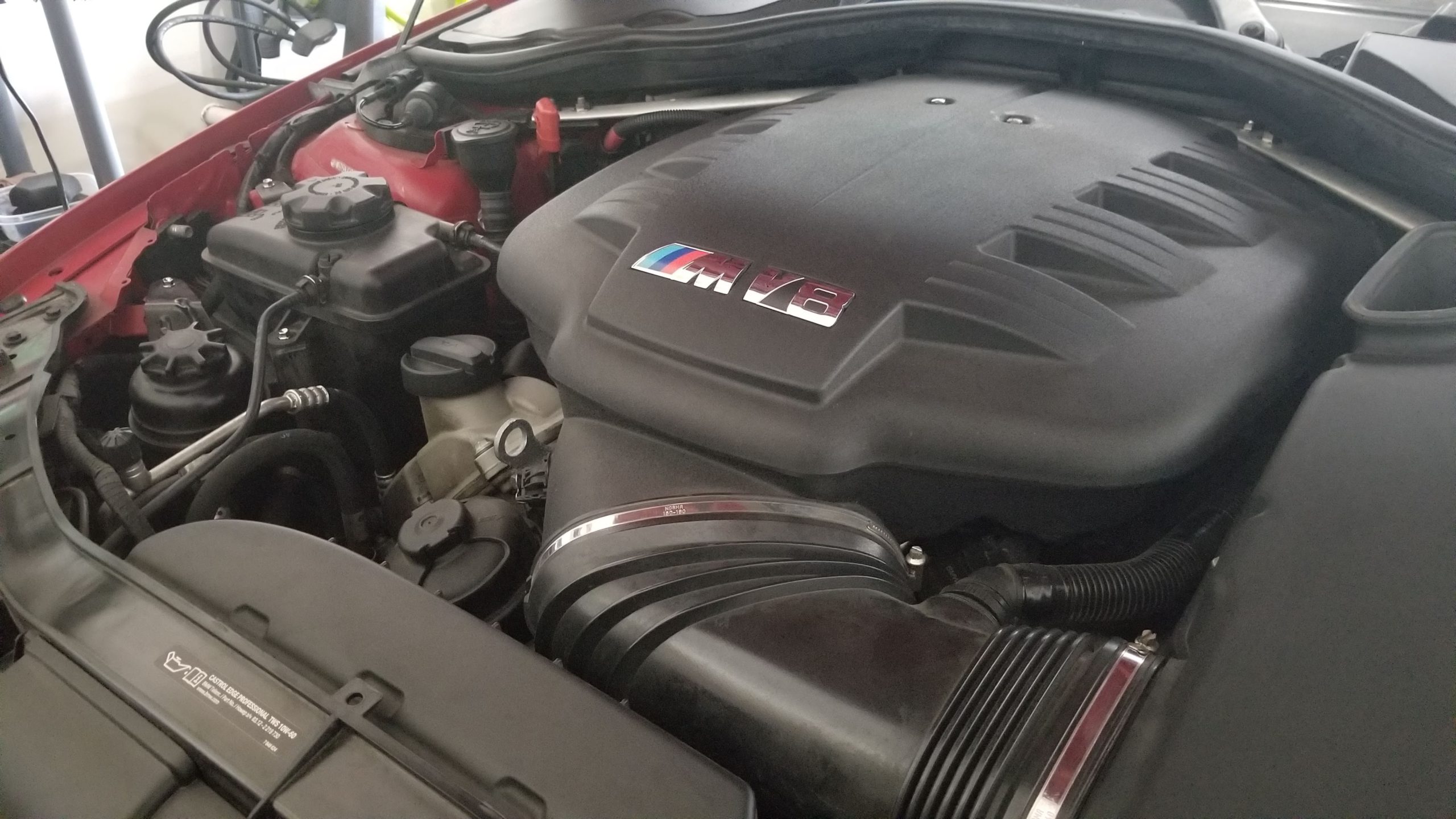 As turbochargers are not often the route owners take when they want to add power, E92 M3 owners will more often go the route of adding a supercharger.

Two of the most popular supercharger kits are made by VF Engineering and ESS Tuning. Supercharger kits run in the $6,000-$7,000 range and are good for 500-600 hp depending on what kit you opt for. But if hemorrhaging money is more your style, there is a more exclusive way to increase power on the E92 M3.

The route I would take: Well, my E92 M3 does not have any engine modifications, so with this one, I can only tell you what I would do. After attending car shows, cars & coffee, and all sorts of other automotive events, any supercharged M3 I have seen has had a VF Engineering kit which seems to be the route to go. 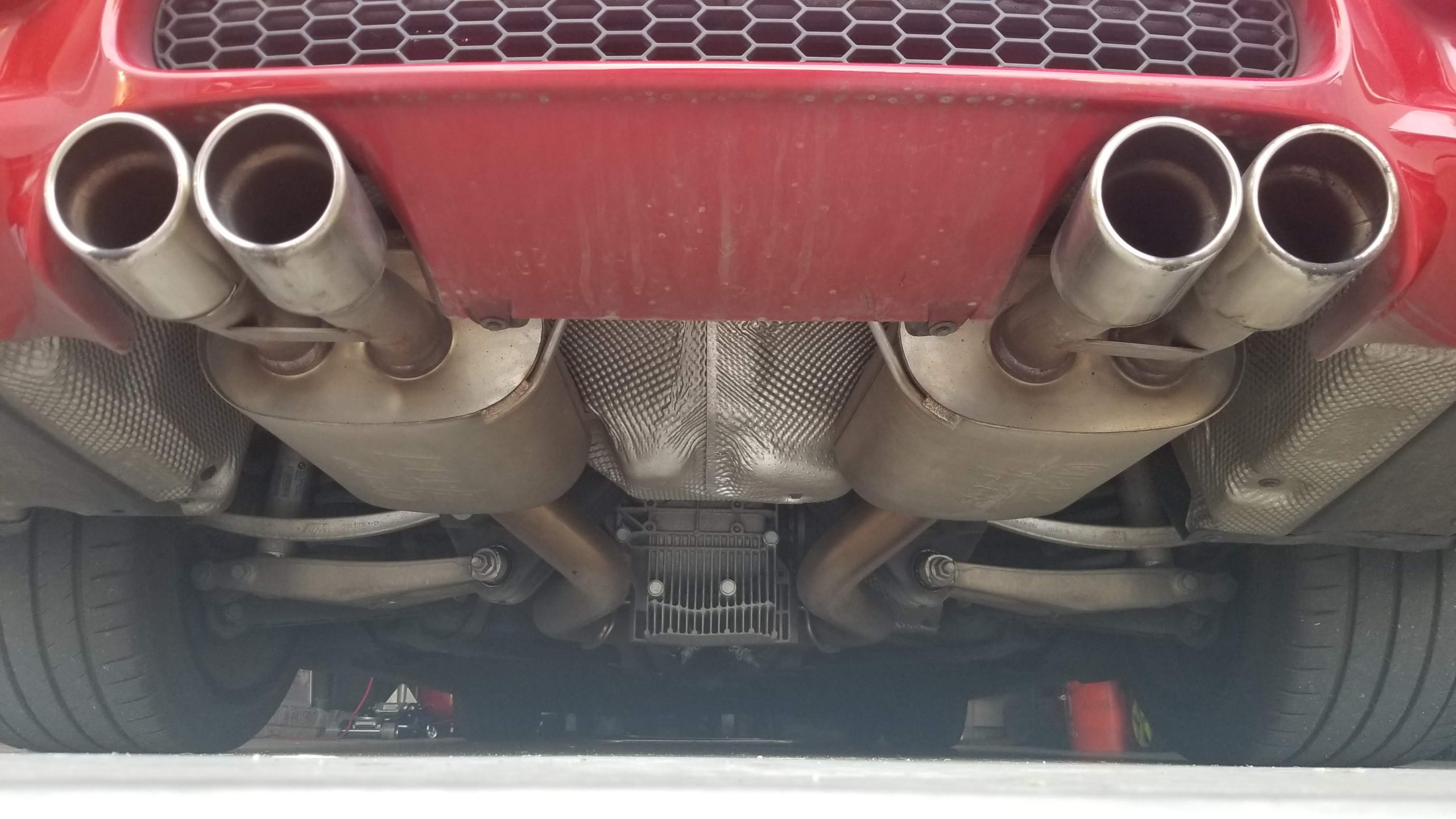 One of the best things about owning a BMW E92 M3 is the exotic-like sounds from the S65 V8 screaming at 8,250 RPM. This is why one of the first mods nearly everyone does is let it breathe a bit more with a different exhaust.

A significant portion of BMW E92 M3 owners will not opt for an aftermarket option. If they are so-skilled, they will simply cut up their OEM exhaust (or have a shop do the work) to create a custom work of art. If you know what you are doing or have access to someone who does, this can be one of the most cost-effective mods.

If cutting into your exhaust is not your sauce, I can relate, and you have other options. Some common exhausts I see on E92 M3s are the BMW M Performance OEM upgraded exhaust which is made out of Inconel (note: V1 is known to crack, so save the headache and get a V2), the Akrapovič titanium slip-on or full section exhaust, a Dinan exhaust, or some options often found on American muscle cars, such as the Borla ATAK exhaust.

The route I took: I personally went with the Borla ATAK exhaust on my M3. I had an axle-back Borla ATAK on my Gen 5 Chevrolet Camaro, and when I traded that in for my M3, I knew the sound would still make me smile. Above is a clip showcasing the difference between the stock exhaust and the swapped Borla ATAK exhaust.

The brakes are one of the few negatives of the E92 chassis. Stock, the E92 M3 comes with a single-piston setup. While fine for daily driving and even spirited weekend outings, the second you take the E92 on track, you’ll know the brakes are the weak point of the car.

Better pads and stainless steel lines to help reduce heat are always a good first step, but should you get the track day bug, a big brake kit will inevitably be in your future.

Occasionally, you might see a driver opt for a big-money Brembo kit, but the significant majority of E92 M3 owners pull the trigger for a StopTech big brake kit. Track rats go for the Trophy kit from StopTech which gives you bling nickel-plated calipers that can handle a bit more heat, while the enthusiast choice is often their base ST-60 or ST-40 kit up front (basically 6 piston or 4 piston, respectively) and the ST-40 kit in the back. Retail for the Trophy kit often goes for $4,000 per axle, and a bit more for the 6 piston version. The base kit will run you just north of $3,000 per axle.

An additional brake kit option has also begun popping up online — retrofitting another vehicle’s big brake kit to work on the E92 M3. There are a few places online that will retrofit the Renault Mégane RS Trophy-R calipers with a custom bracket so you can fit a Brembo 4 piston kit on your car for less than $1,000.

Depending on your OCD level, there are not any rear retrofit kits that I have seen, so having a kit on the front, but not the back might put you off. Also, there is a lot of discussion online about whether you should be putting brakes that have not had any R&D or testing done with an M3 on your car.

The route I would take: I have not done any brake upgrades to my M3 yet, but I will need to do brake maintenance on my E92 M3 soon. When I do, I plan on upgrading the brakes and more than likely will be taking the route of either the 6/4 piston combo or 4/4 piston combo from StopTech. 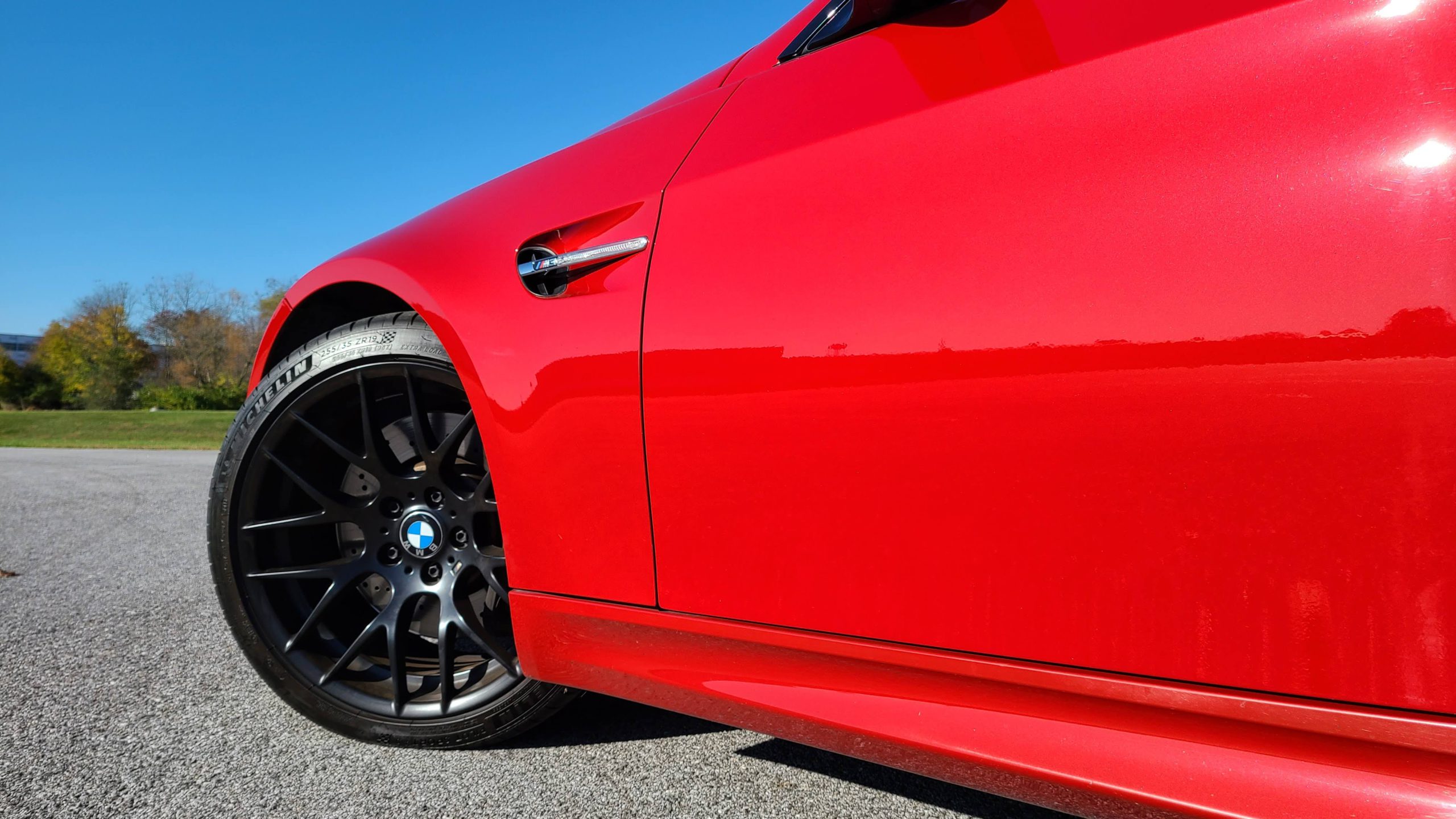 When scouring the forums, you will see two main options people hunt for—the ZCP wheels or Volk Racing TE37s. A third vote could go to a BBS wheel, but no one model stands out above the others. A fourth vote could also be made for Apex, an option that a lot of track rats prefer. However, in terms of a specific wheel model line, there are only two models that are consistently scooped up, sometimes within a day of getting posted for sale on the forums, sometimes within hours.

These wheels are sought after by owners of non-competition package M3s or owners who want multiple sets for multiple purposes (i.e. a street set vs. a track set). The E92 M3 GTS comes with a set of matte black wheels. Those wheels are exactly the same as the Competition Package wheels with the exception of the matte black color.

The legendary Volk Racing TE37s should need no introduction, but it might sound odd to some owners to put a JDM wheel on the German-made performance benchmark from 2008-2013.

Regarding the rubber that E92 M3 owners often wrap their wheels in, the current favorite appears to be the Michelin Pilot Sport 4S. A slight budget hat-tip could go to the Bridgestone Pole Positions. In terms of track rubber, I have seen a steady flock to Bridgestone, specifically the Potenza RE-71s. 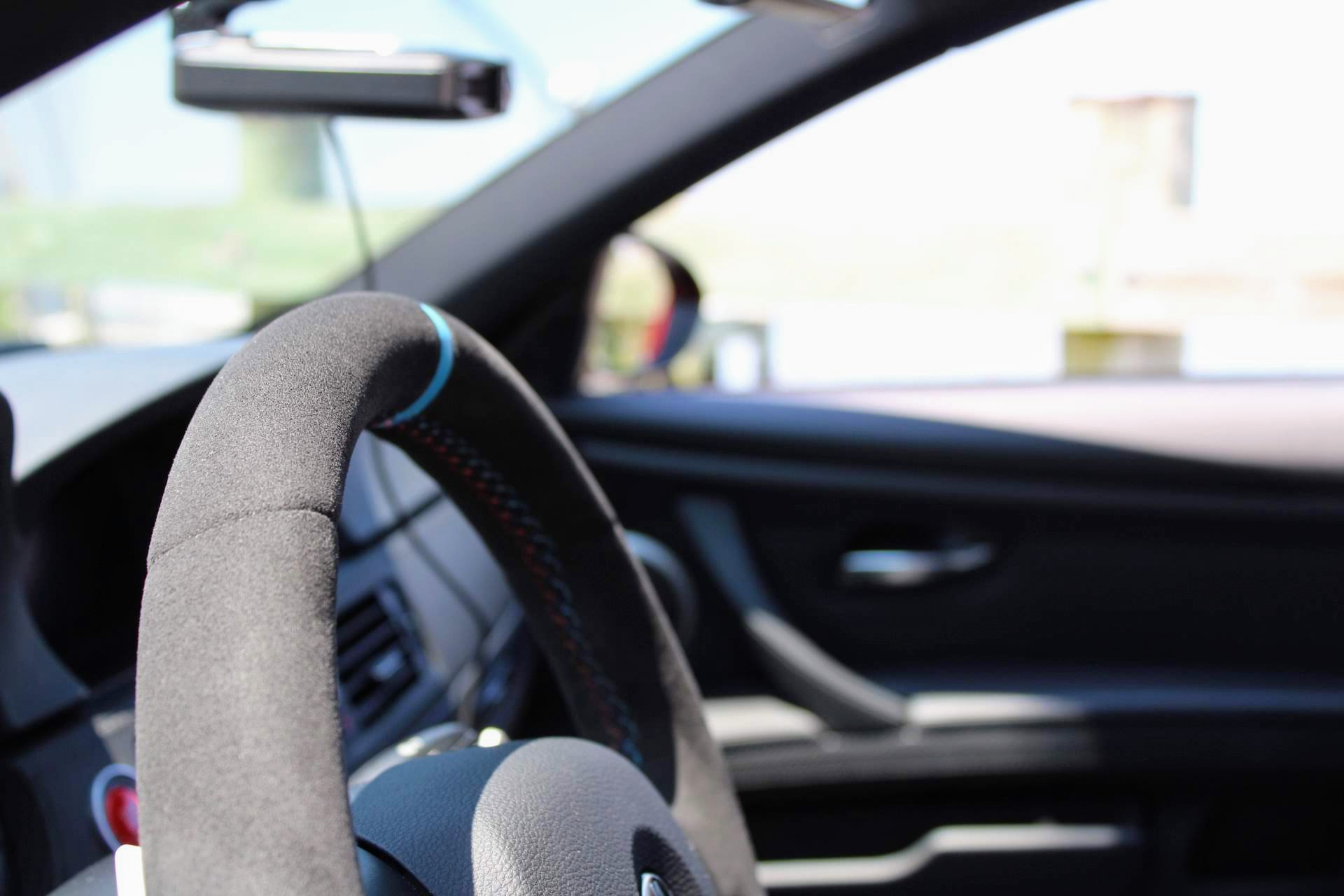 The interior of the E92 M3 is just as important as the performance of the vehicle. E92 M3 owners often change out stock bits for parts that make it feel just a bit more special.

Seats are very important as well. Many owners will say the stock seats sit a bit high, no matter how low you set the seats. Perhaps the most chosen aftermarket seat for E92 M3 owners is the Recaro Sportster CS and the now newer Sportster GT seats. For fixed back seats, owners often opt for either the Recaro Pole Position or Sparco Evo seats.

There are a bunch of smaller interior changes that can be done to the E92 M3. Swapping DCT paddles, swapping buttons, rear seat delete, adding carbon fiber interior parts — the sky’s the limit.

I have not installed any performance seat yet, but I am currently plotting to upgrade to either the Recaro Sportster GT or might just go for the fixed back Sparco Evo for the lower cost. 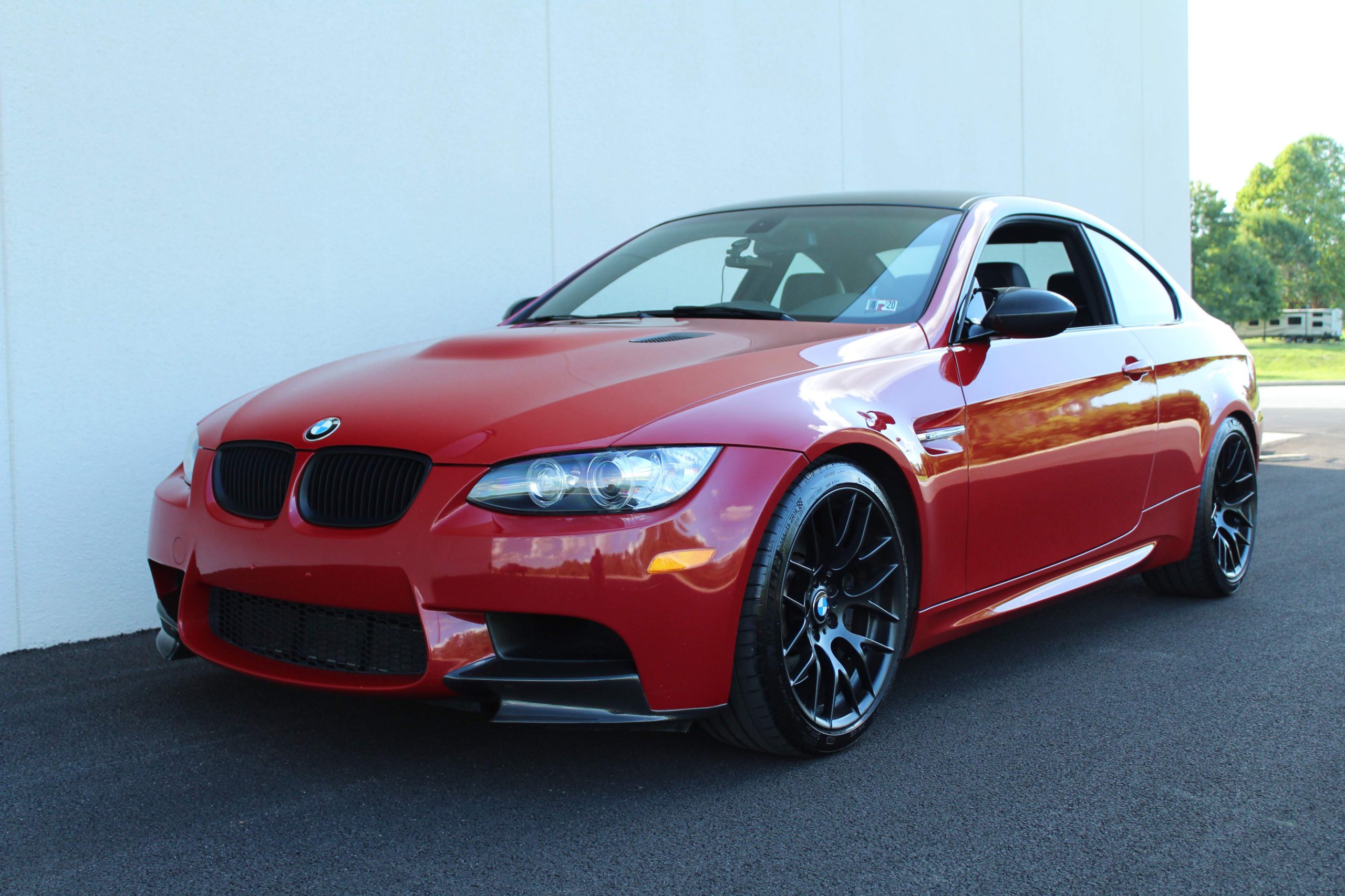 The exterior of the E92 M3 is perhaps most important. As this is what everyone sees, it needs to fall in line with your definition of looking good.

Carbon fiber on the E92 M3, like as on all performance cars, is the normal go-to, and BMW offers some M Performance parts. You can get a BMW M Performance spoiler for your trunk, two splitter pieces for the front, and some mirror caps. There are plenty of legit aftermarket carbon fiber options, but be aware that there are more fake carbon fiber parts on the market than real ones.

Owners often add carbon fiber diffusers and side skirts. Also, an appearance mod that is growing in popularity is getting the E92 M3 GTS wing made by someone like Mode Carbon. Mode Carbon and Seibon Carbon are some of the quality makers of carbon fiber parts for the BMW E92 M3.

There are also a few body kit options on the market if that is your thing, but no one kit stands out among the crowd, even if the first thought in your head is Liberty Walk.

The route I took: I installed the BMW M Performance spoiler and mirror caps. For the front splitters, I knew they would get destroyed by the road and by pulling into my driveway so I went for an aftermarket option, but real carbon fiber nonetheless.

Modify Your BMW E92 M3 To Your Liking

There are a few other things that people commonly modify on their E92 M3s, but these are the most modified part segments. I hope this has helped you get some ideas on where you could take a BMW E92 M3. If you have any further questions about specific mods reach out to me via Instagram. I am happy to point you in the right direction.


10 of the Most Powerful American Cars Ever Made
8 of the Best 2020 Luxury Cars Heading Our Way
10 Unlikely Joint-Venture Vehicles
The Best of 2021 Infiniti
Extended Vehicle Warranty: Good Deal or Dealer Steal?
10 Amazing 1991 Cars You Can Legally Own In the United State...