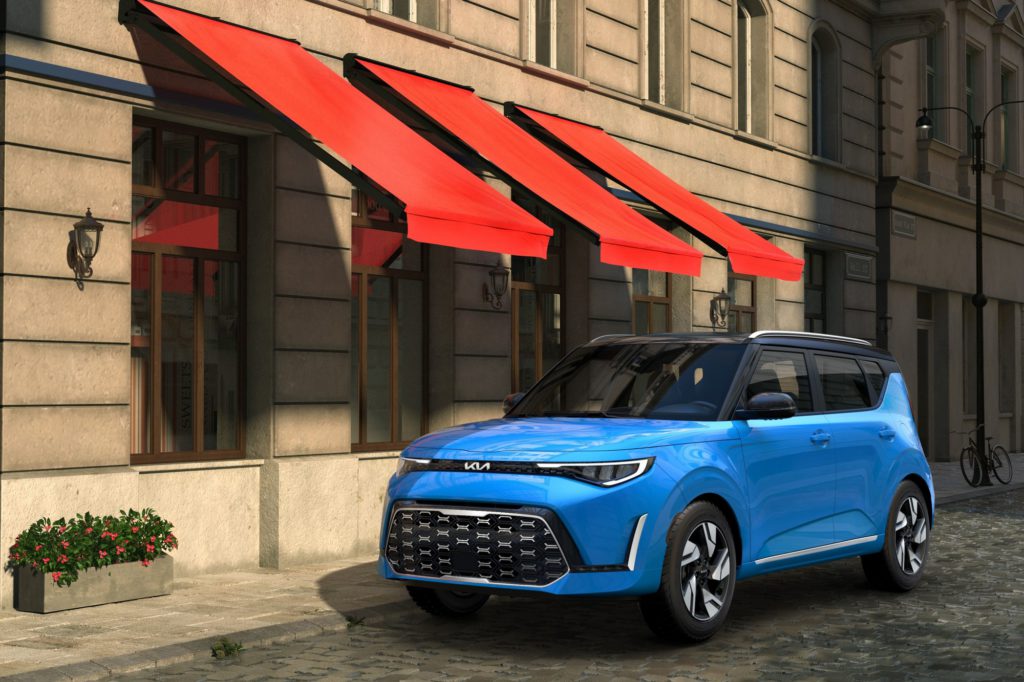 The 2023 Kia Soul is getting a refresh that gives it new headlights and taillights. Kia is boosting features, making some previously optional safety kit standard. It is also bundling some desirable safety features into a package offered on the lowest trim to make them more accessible. Lastly, Kia is simplifying the Soul line, dropping the rugged X-Line trim and the 1.6L turbo-four.

Kia’s third-generation Soul was launched in 2019, updating the boxy model – a large hatch or a small crossover depending on your viewpoint. It arrived that year with two engines, a manual transmission, and the promise of an EV model to come.

In 2022, the stick shift disappeared. And the delayed EV was canceled. For 2023, the 201-horsepower 1.6L turbo-four gas engine is being dropped.

The remaining engine will be a 147-horse 2.0L four-cylinder that produces 132 pounds-feet of torque. It will be front-wheel drive and will have a CVT Kia calls “Intelligent Variable Automatic.” 2023 EPA numbers weren’t released, but with the small exterior changes, it’s safe to expect the same 28 mpg city, 33 highway as 2022.

The top-tier Turbo trim disappears with the engine it’s named for. X-Line, a trim level that added black cladding to the arches and sills – an attempt to make the Soul a bit more rugged – is also gone.

So what’s new? Kia calls the 10.25-inch touchscreen with navigation “a welcome addition” to the car. But it has us a touch confused, as it looks just like last year’s 10.25-inch screen with nav. It’s on all but LX models, with the base trim getting an 8.0-inch screen. All of them have Apple CarPlay and Android Auto.

The front fascia is also all-new. The 2023 Kia Soul gets a more expressive lower grille featuring some bright new accents that vaguely mirror Kia’s latest Tiger Nose face. New LED headlights are offered, with the daytime running light signature, turn signals, and fog light designs also all-new. There are small changes to the rear fascia and new lights back there.

The list of standard driver assistance features now includes Forward Collision-Avoidance with pedestrian detection, Lane Keeping Assist + Lane Following Assist, and Lane Departure Warning. The soul will have a high-beam assist as well as a rear occupant alert that uses door logic (instead of ultrasonic sensors).

The 2023 Kia Soul will be offered in LX, S, EX, GT-Line, and GT-Line Tech trims. GT-Line Tech includes comfort goodies like a Harman/Kardon audio system and multi-color LED speaker lights that pulse to your music. This feature is also offered on Seltos and livens up the cabin at night.

Heated front seats are also reserved for the top trim, with power adjustment for the driver. As is forward collision avoidance with junction turning capability. That feature can help you avoid a collision if you’re turning left in front of oncoming traffic. Highway Drive Assist, which combines adaptive cruise control and lane-keeping assist to help make long drives easier, is also part of the package. That adaptive cruise system is navigation-based, so it can slow for bends and intersections.

The Soul might not be Kia’s most talked about model, but the automaker points out sales were up five percent last year to top 75,000 units. While pricing for 2023 hasn’t been released yet, expect it to remain competitive and keep the Soul moving.