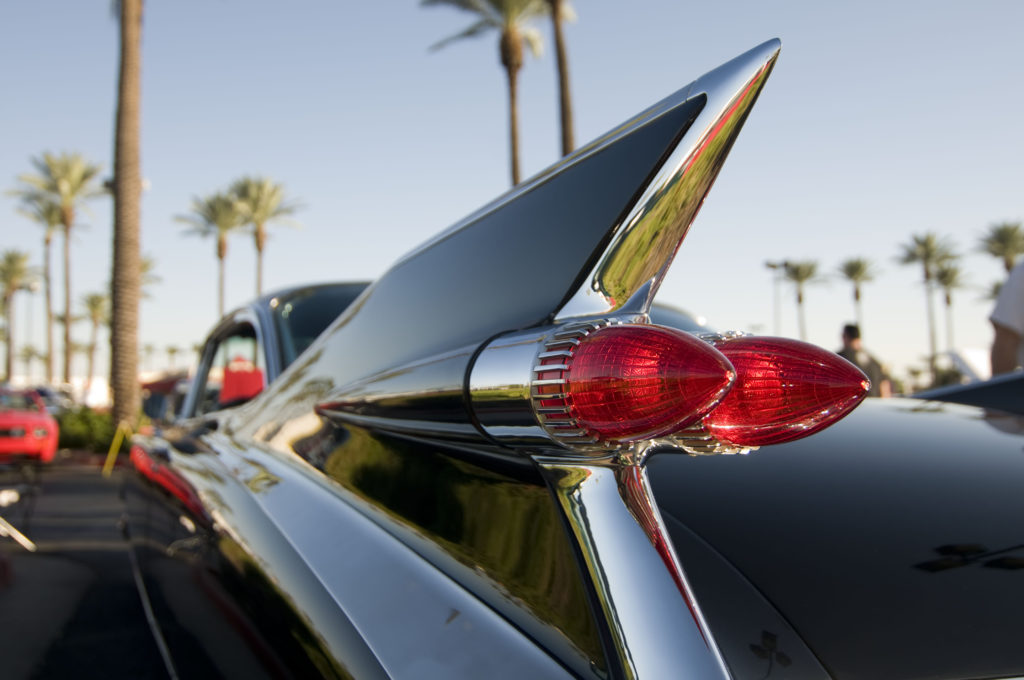 Towards the end of the 1950s, car makers decided that they wanted their cars to fly. Well, more accurately, they wanted to make them look like they could fly. In a decade when America was taking to the sky on passenger planes and on the verge of space travel, cars with fins became all the rage. And, in fact, GM designer Harley Earl credits a plane as his inspiration for the tail fins design. His legacy lives on today in these classic cars with tail fins.

While obviously not the first finned car, the ’57 Bel Air is certainly one of the most iconic. Truly, this list wouldn’t be complete without the car that many Americans have come to adore. However, the fins on the Bel Air are a more modest, mid-sized set of fins compared to some of the cars with fins from the ’50s. Today, the 2-door Bel Air is one of the most sought-after American car models on the classic car market.

The 1959 Buick Electra is absolutely stunning. It didn’t just have enormous tail fins — it had nose fins, too. The striking and unique appearance of the Electra gave it a slightly amphibious look which distinguished it from other ’50s cars with tail fins. Whether you spot one from the front or rear, this is one car with fins that will make you do a double-take.

The 1959 Cadillac Eldorado was one big and beautiful car with big, extravagant fins to match. You couldn’t miss the Eldorado’s tail fins with their unique dual quad-taillights. Thanks to the unique design these fins look like an afterburner lifting a jet off the ground. In fact, the whole back end of the Eldorado is very reminiscent of a jet fighter. That’s some seriously cool General Motors styling.

1957 was a big year for most car manufacturers. For the Blue Oval Company, that was the year that the Thunderbird really started to make some strides following some design changes. And while the big-bumper Lincoln Premiere flew a bit under the radar, its showy tail fins were right up there with the best cars with fins of its time.

Okay, so the 1959 Rambler was exactly a “cool” car in the ’50s, but it was a unique one sporting tail fins. The sedan with its eye-catching stripe and pointy tail fins definitely would stand out in the crowd of the more boxy, demure sedans of its day. And though you won’t find many Ramblers on the road today, if you do catch one in passing those tail fins are certainly going to catch your eye.

Much in the same way that the infamous mullet was business up front and party in the rear, the 1957 Buick Roadmaster was Bel Air upfront and Buick in the rear. The Roadmaster’s fins weren’t as sexy as some of the other models, but if you’ve always wanted a ’50s era car with fins and can’t afford the one you want, the Buick really starts talking to ya.

Perhaps the most menacing car with fins of the bunch, the 1957 Cadillac Eldorado Brougham certainly has presence. The fins on this Caddy look like they belong on a hearse —  or the Batmobile. Any way you slice it, those are some mean-looking fins, Batman!

When talking about the sexy lines and fins of the fifties, one doesn’t usually consider the enormity of the 1957 Dodge Coronet Lancer. However, in a decade of cars with lackluster performance, Dodge stood out in the ’50s with an early generation Hemi that produced a wicked-for-the-time 340 hp. Sadly, very few of the Coronet Lancers were fitted with the Hemi, and if you can find one now, they are worth a small fortune.

Just when you thought things from the 1950s couldn’t get any stranger, you realize that some automakers actually put fins on their pickup trucks. The 1957 Dodge Sweptline Truck is an example of this unique tail fin application. In reality, the truck is attractive and extremely rare, with a rear-end that really is one-of-a-kind.

Everyone has their opinion about what a proper tail fin is supposed to look like. DeSoto was no different and opted to create a unique tail fin with three tail lights in the fin. After all, if you have a car with fins it should look like it is lifting off, right? The Firedome certainly captures that energy with tail lights that look like they belong on a jet.

Back in the day, Dodge’s cars with fins were out to make a statement. The 1958 Dodge Custom Royal was no exception. And because Dodge offered up engine displacements very similar to Chevrolet’s engines — like the 350 cubic inch V8 that came standard on the Custom Royal — meant you got looks and performance in your tail-finned package.

What’s better than having one set of fins? Well, having two sets of fins, of course! In an attempt to take it to the next level, Packard strategically placed a set of fins on top of a set of fins. Who wouldn’t want fins on fins? Or one of these hardtop convertible ’50s cars? Unfortunately, you might have a hard time finding one as the Packard car company was merged with Studebaker and didn’t survive into the next decade.

The 1954 Buick Skylark had one foot, er wheel, in the rounded bodies of yesteryear, and one foot in the future. The Buick’s fins weren’t overdone, although they didn’t exactly seem to fit with the rest of the car, either. Though the Skylark was a bit odd, it still wins as one of the coolest luxury cars of the post-World War automotive industry.

By the end of the decade, some auto manufacturers felt the need to stand out from the masses. Chevrolet decided that, in order to do just that, it needed to take a different direction with the fins on the Impala. So, instead of the straight, pointed fins of yesteryear, the Impala got dramatic, swooping fins and quickly become one of the most recognizable cars in the 1950s.

While other companies like Chevrolet were extending the reach of their fins, the Ford Motor Company took the opposite tack, opting instead to make their tail fins smaller and less pronounced. The subtle fins on the 1959 Thunderbird are a just-perfect nod to the ’50s era cars with fins without being over the top. When coupled with a smaller-sized family car, the T-bird’s sales increased tremendously.

Oldsmobile left the traditional fins in the dust with the 1959 Super 88. Unlike other new car models of the era, the tail-lights were integrated into the fins, but the fins were rounded off, and actually shaped like the light lense, giving the Super 88 a cool sports car vibe.

This list wouldn’t be complete without a Stud on it. The 1958 Studebaker Silver Hawk had fins like many of the other cars of the ’50s, but the front end was totally different from anything else floating around at the time. This car was truly a classic and had that real 1950s look, perhaps even more so than the un-finned Studebaker Champion.

The 1958 Mercury Parklane looks like something from another planet — or at the very least something straight off a movie set. But the Parkland wasn’t a prop. Those unique, slightly crazy tail fins were just another example of the ’50s cars with fins craze. Mercury’s take just happened to be a little out of this world.

The cousin of the much more famous Chevy Bel Air, the chromed-up 1957 Pontiac was another car with fins to be had in the ’50s. The main difference between the Chevy and the Pontiac was, of course, the tail fin design and the large chrome bumper. But, hey, who doesn’t love chrome?

Sure, there are probably a few other classic cars and sports cars with fins out there that could be added to the list. No doubt there’ll be a few people who appreciate the bulky fins of the Ford Fairlane or the subtly finned Hudson Hornet, and, of course, not forgetting the Lincoln Continental Mark V.  With a decade of models with sharp, edgy, and unconventional tail fins to choose from, you can thank Harley Earl and the aeronautical obsession of the ’50s that brought us these cool cars.