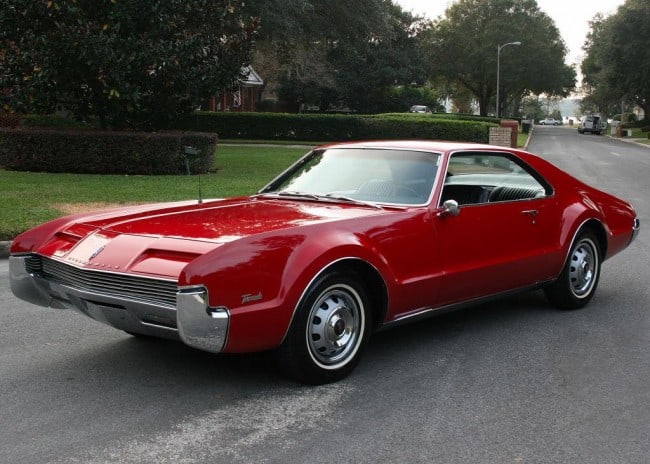 Over 50 years ago, in 1966, several new cars and technologies were launched that influenced the auto industry for many years to come. Let’s start with 7 of the most important cars from that glorious year! If you’re hoping to see a Ford Mustang of Chevrolet Corvette, prepare to be disappointed. 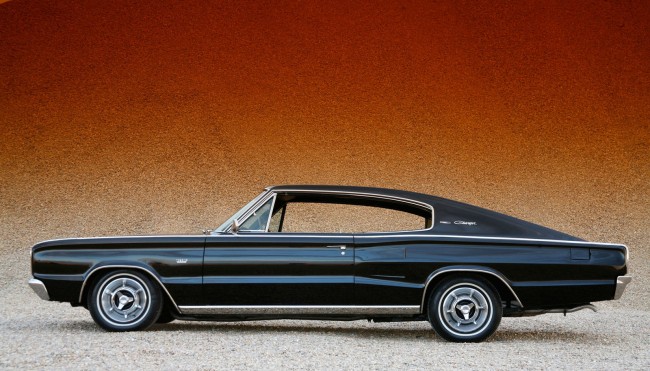 That year saw the launch of another iconic muscle car, a trend-setting Italian super car, one of the first cars heavily focused on the safety of its driver and passengers, and the car that would break all car sales records and become the most popular car of all time. These cars gave birth to some seriously enduring auto trends!

Scroll down below to explore the auto world of 1966. 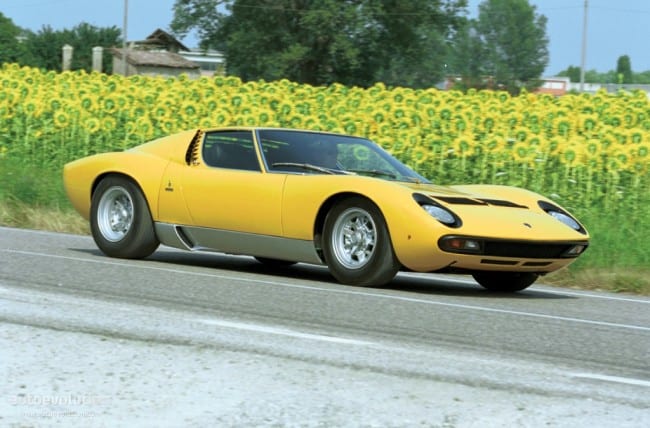 The impact can’t be understated that the Muira had on the automotive world. Prior to its introduction, high-performance performance cars had their engines in the front. It was the way Ferraris, Maseratis, and Lamborghinis were built. One one of these companies introduced a car with a mid-engine it was designed more for the gentleman racer who wished to compete with the car on weekends. The Muira turned that upside-down. It was a comfortable Grand Tourer, with space for two and luggage, capable of carrying driver and passenger several hundred miles with easy. With few exceptions, high performance cars from those Italian manufactured mentioned, has predominantly been mid-engine designs. 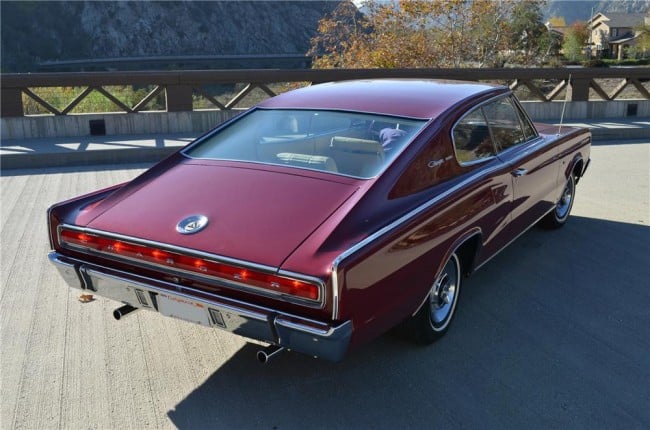 Over the years the Dodge Charger has become the bad-ass persona of all muscle cars, built largely through its use in motion pictures. It was the car the bad guys drove (Bullitt), or the tough guys (Fast & Furious franchise), or a disgruntled race driver (Speedway), or robbers on the run (Dirty Mary and Crazy Larry). What usually comes to mind is the 1968 – 1970 body style, which is truly a classic that shows no signs of aging. Unfortunately, the original 1966-1967 wasn’t quite as timeless, as the photo below demonstrates. 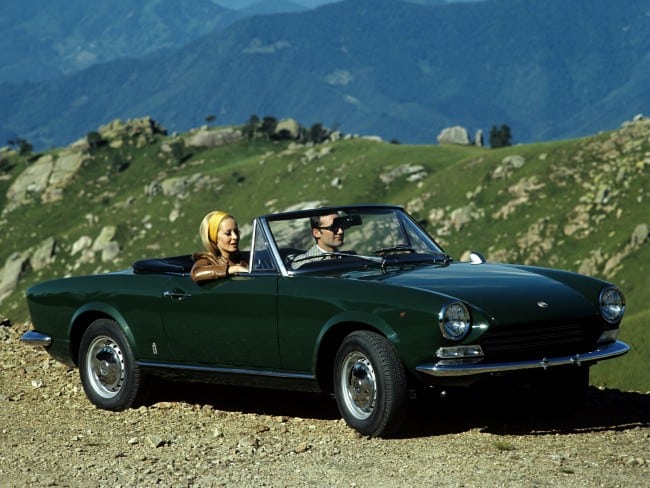 With all the press regarding the new Fiat 124 Spider soon to debut (based roughly on the Miata platform, earning it the nickname Fiata), it’s appropriate to celebrate the 50th anniversary of the original Fiat 124 Sport Spider. The Sport Spider, designed by American Tom Tjaarda, was a model in a line-up that included a sedan, station wagon and coupe as well.  The Spider was powered by DOHC crossflow eight-valve cylinder head designed by former Ferrari engineer Aurelio Lampredi atop Fiat’s iron four cylinder block. Displacement began at 1.4 L and increased to 2.0 L by the time production ended in 1985. 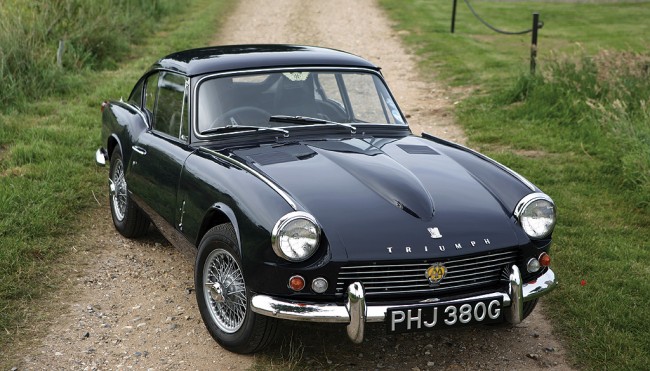 I’ve always admired the ability of the British to pull together components from disparate cars and assemble a truly classic automobile. In this case, the Triumph GT6. Intended to accompany the Spitfire from the start the full body of the GT6 was too heavy for the original 1.1 L engine. Fiberglass copies of the roof design were fitted to racing Triumphs to great success, so a different path was chosen. Instead of trying to lighten the GT6, instead the larger 2.0 L from the Triumph Vitesse sedan was fitted, providing an excellent power-to-weight ratio. The same engine would then be fitted to the TR250 and TR6 sports cars as well. 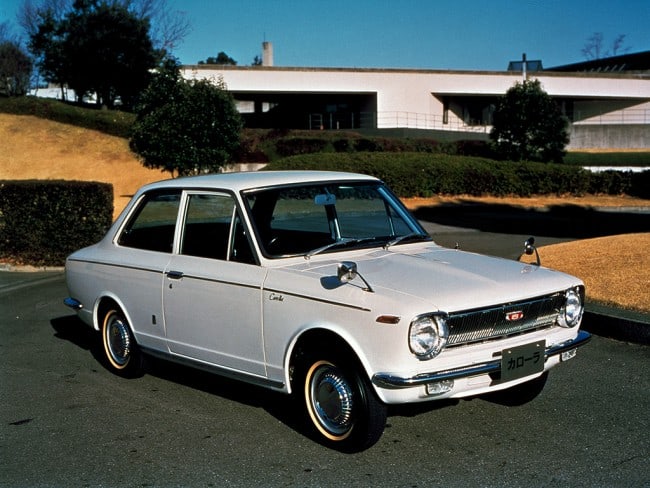 With rare exceptions, like the AE86 model, has the Toyota Corolla ever inspired excitement. Nonetheless from its humble beginnings as a subcompact car with a 1.1 L four cylinder pushrod engine. The car was continuously developed and improved by Toyota until it became the number one selling car in the world in 1974. It surpassed the original VW Beetle in total sales in 1997 and in July of 2013, Toyota celebrated the sale of the 40 millionth Corolla. At its current rate of production, Toyota sells over 3,000 Corollas per day around the world. 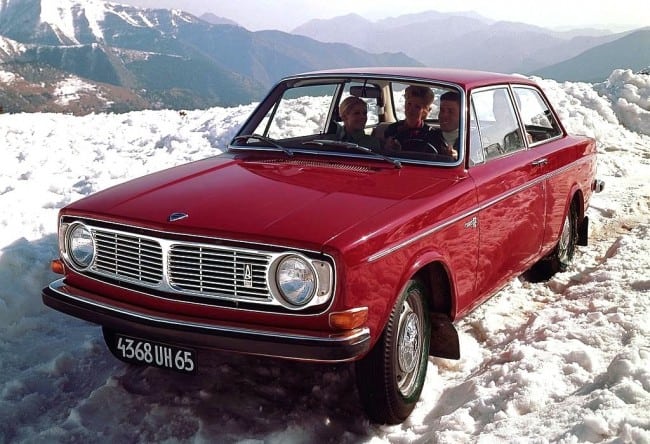 If any of you recall the 1990 film “Crazy People” its premise is an overloaded ad exec is sent to a mental hospital to recover, but instead enlists his fellow patients to develop ads – truthful ads that tell it straight. One was an ad for Volvo: Buy Volvos. They’re Boxy But They’re Good. The tagline was: Be Safe Instead of Sexy. The car that started the Volvo as a box theme was the 140, introduced in 1966. Prior models (544, 122) were quite rounded. Volvo produced two door, four door, and station wagon versions of the 140, all US models powered by a version of Volvo’s B-series four cylinder engine. The basic 140 architecture continued as the basis of the 240 series, launched in 1974 and remained in production until 1993 (23 years). It’s a beautiful classic car.

Fuel Cell and Electric Vehicles may seem like new technologies, but automakers had advanced prototypes 50 years ago. Check out what else was going in 1966.

It’s surprising to learn that what we now believe are advanced technologies have been in development for many decades. The ideas, and concept cars they were installed in, were typically sound, but the technologies of the time often weren’t able to deliver reliably, economically, or safely. 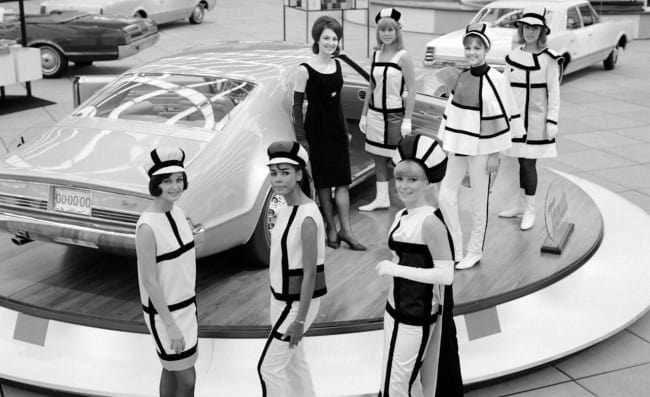 Let’s take a look and see what technologies were already in development over 50 years ago, in 1966. 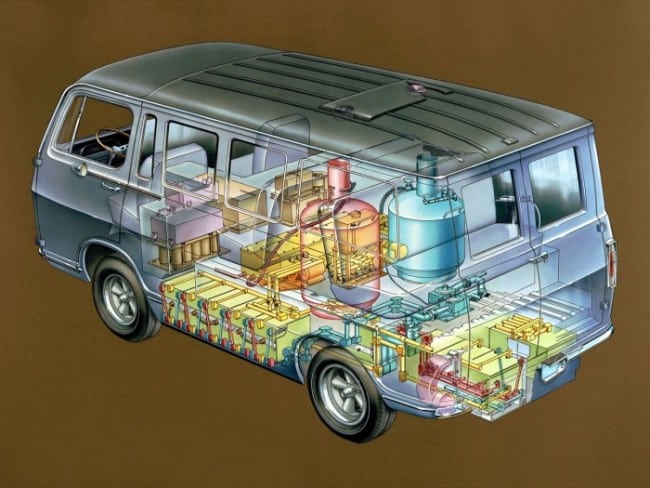 The 1966 GM G-10 Electrovan is credited with being the first hydrogen fuel cell vehicle ever produced. Though fuel cells have been around since the early 1800’s, GM was the first to use a fuel cell to power the wheels of a vehicle. The fuel cell van program started when  modules became available with enough power density to propel a vehicle. Electrovan’s fuel cell powerplant supplied a continuous output of about 32 kilowatts and a peak output of 160 kilowatts. GM’s intent was to design a vehicle that could match a standard delivery van in acceleration, performance, and driving range.

Located beneath the floor were the 32 fuel cell modules interconnected by approximately 550 feet of plastic piping. Also part of the installation were cryogenic hydrogen and oxygen tanks and an electrolyte reservoir mounted behind the middle bench seat. About 45 gallons of potassium hydroxide were required to fill the modules, the piping and the reservoir. This electrolyte alone weighed 550 pounds bringing the van’s total weight to a hefty 7,100 pounds.

The Electrovan had a top speed of 70 mph, but ith all that weight onboard, could only accelerate from 0-60 MPH in 30 seconds. It had a range of approximately 150 miles. Because of safety concerns, the Electrovan concept car was only driven on GM company property. 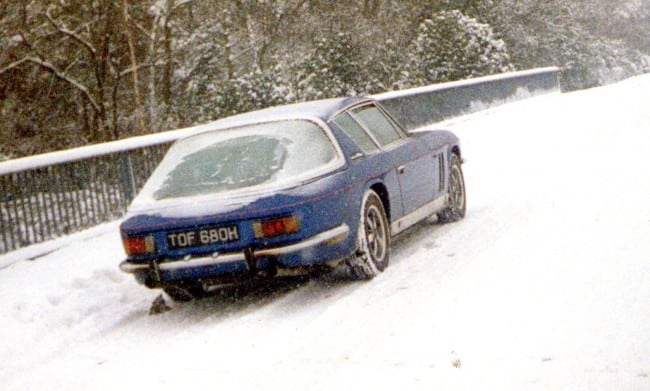 The transfer case used a limited slip differential that allowed the front and rear axles to have somewhat different speeds, eliminating scrub and inefficiency, while still providing the benefits of four wheel traction. As set up by Jensen, the car drove  63% of its power to the rear wheels, providing owners of rear wheel drive cars with a familiar feel. However, once a wheel started spinning, the system moved extra power to the other axle.

The First Use of ABS on a Production Car: Jensen FF 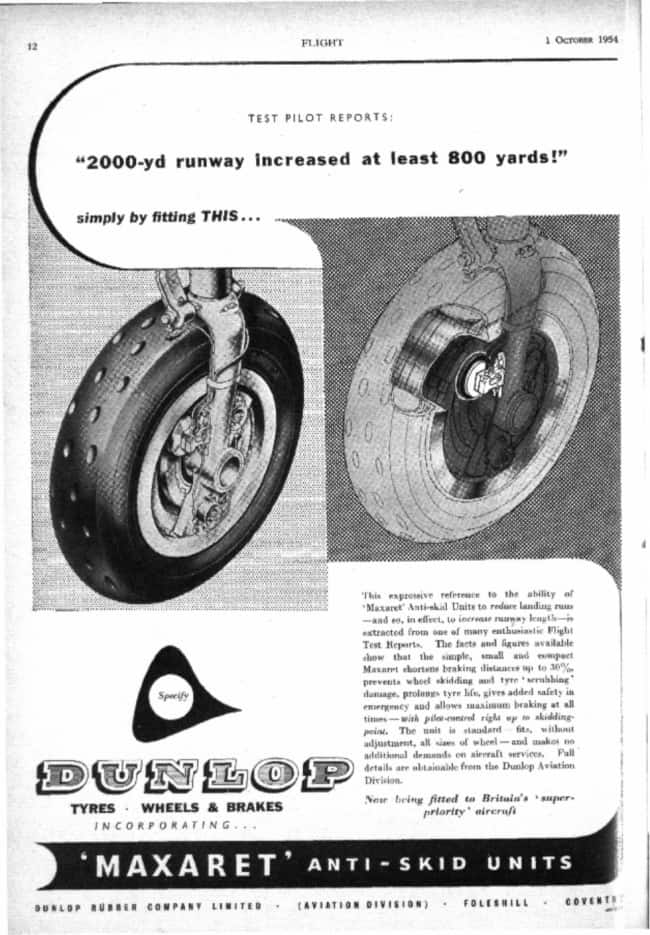 Our 1966 Jensen FF is also the first production car to be fitted with an Anti-lock Braking System. Unlike today’s systems, which are electronic, the Dunlop Maxaret system (power brakes originally designed for aircraft) operated mechanically. It was a clever system for it’s time, fitting entirely within the wheel and weighing just over four pounds.

The system operated by measuring the relative speed of two spinning disks inside the hub. When a skid developed, the road wheel would stop, the rotating mechanism would be driven forward to press on a valve, which released brake fluid into a reservoir, lowering hydraulic pressure, and releasing the brakes. As soon as the road wheel started spinning again the valve was released and the brakes re-applied. The system could cycle about ten times a second, and could hold the brakes off for up to four seconds in total before the reservoir filled. 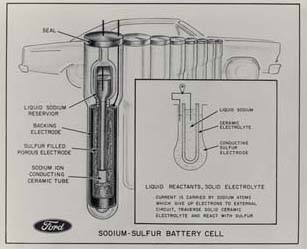 In 1966, the Ford Motor Company unveiled a new battery technology intended to power a future EV: Sulfur-Sodium (as called NAS), which used a quantity of molten Sulfur and molten Sodium to provide the reaction. The batteries were highly efficient but operated at temperatures of over 500 F and were problematic in the case of an accident (more in a minute), not really well suited for use in passenger cars.

Having no other use for the technology, Ford sold the patents to Japanese electrical giant NGK, who built large NAS  batteries for power-generation facilities for use as  “buffers”. A fire at a power plant involving the batteries has called their use into some question, but they may well be the best choice for these applications. In the meantime the technology had advanced and is being used, for example, at wind farms. While they may never power a car, they could well be part of the chain that gets electricity to an EV. 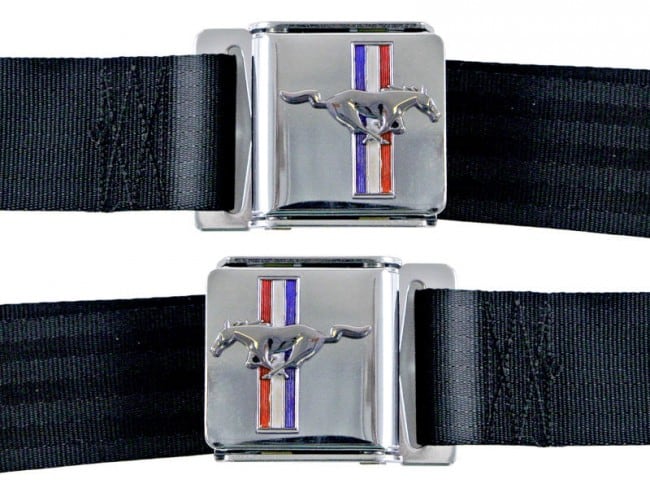 New Federal safety regulations came into effect for the 1966 model year (the National Traffic and Motor Vehicle Safety Act). It’s hard to believe now that  automakers opposed the implementation of these standards, Henry Ford II having been quoted as saying Ford said “ill-conceived Government regulation could result in considerable harm to the nation’s economy.” (Though in 1977 “Hank the Deuce” allowed that the first wave of NHTSA standards had advanced car and highway safety). The new requirements for all vehicles in the United States? Padded dashboards, front and rear outboard lap belts and white reverse lights all became mandatory in 1966. 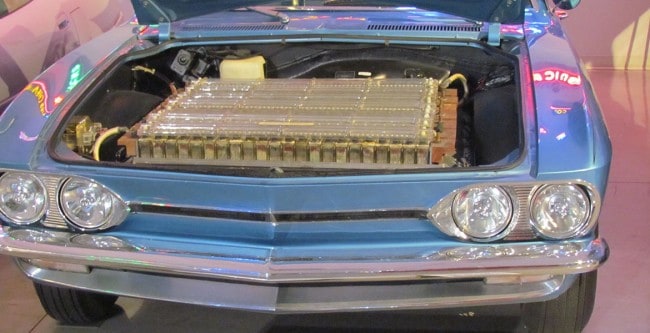 The Electrovair was developed by GM in 1964 as a conversion of the Chevrolet Corvair. The engine and transmission were removed and replaced with electric system components. It had a pioneering 90 HP AC induction motor (same type as in the Tesla) and a 450-volt silver-zinc battery. It was sufficient as a test vehicle but didn’t posess real-world capabilities. The Electorvair II was announced in 1966. It was more powerful than the Electrovair I with 115 hp and 532 volts. Its silver-zinc batteries enabled a top speed 80 MPH and a range 40-80 miles, which would put it at the low end (but within range) of the current best cars of the electric variety – 50 years later.


The Best Bentley 2021 Cars
Watch Every Generation of Porsche 911 Turbo Drag Raced at On...
10 Great Cars That Had A 5-Cylinder Engine
10 Best Cars For Uber & Lyft [Buying Guide]
Mercedes-AMG SL: Major Changes Come to the Iconic Roadster i...
Every Single Chrysler Hemi Engine Ever Made