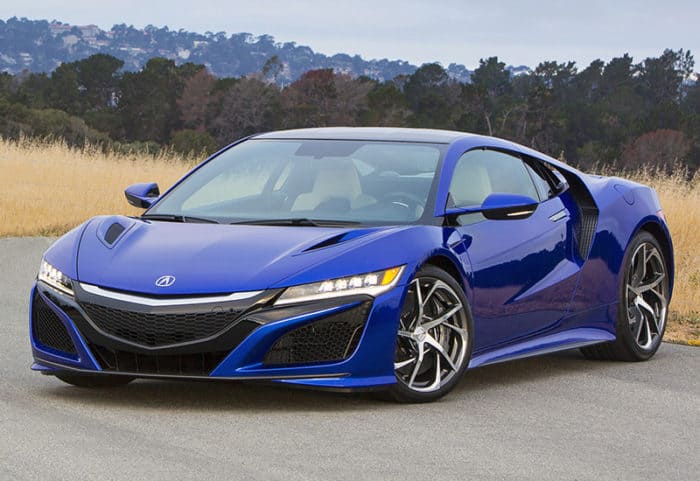 Honestly, as much as we love the big power slides that are easily done in a traditional rear-wheel drive, we’d have to agree that all-wheel drive generally makes for a faster car. If speed is your thing, we’d say that an AWD sports car is for you.

So with that in mind, here’s our take on the top 5 best AWD sports cars from around the world. 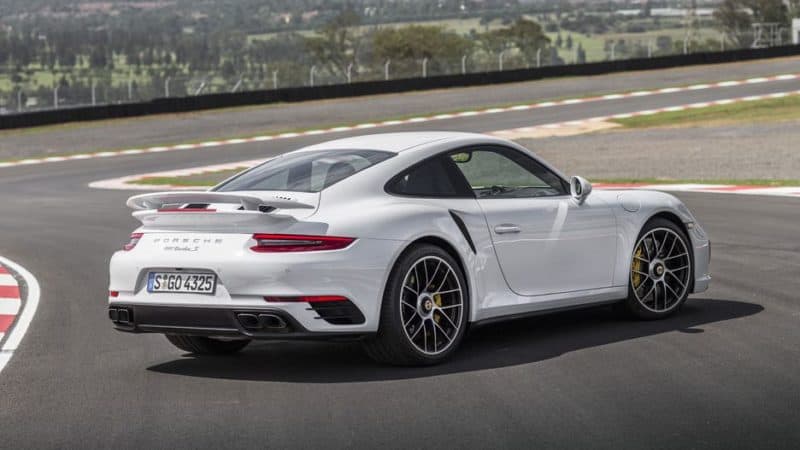 The legend that is the Porsche 911.

Porsche has been producing the 911 since 1963 – that’s almost 60 years of solid production for this one model. Of course, the latest incarnation of the 911 is a little different from early models, but the lines, shape, and heritage are all plainly there.

The 911 Turbo S is one of the only 2-door AWD sports cars in its class that has four seats and usable cargo space.  Chances are, you’ll want to be able to carry more than a fanny pack if you’re planning on using the car for anything more than a sunny Sunday driver.

The Turbo S has a 3.8-liter twin-turbo V6 which produces around 580 horsepower and returns between 19 – 24 mpg (city/highway). Although, we’d take a guess that fuel economy isn’t high on the list of most people seriously considering this car. Zero to sixty happens in just 2.6 seconds (that’s superbike fast) and official dealer prices  for a new car start just under $190,000.

When Porsche first introduced the 911, and for many years after, it was considered tail-happy – you could quite easily pick your desired spot of greenery and head through it backward as the tail stepped out, flinging you through the corner. Ever since the vehicle evolved to an AWD layout, however, the handling has been tamed, making the 911 Turbo S one of the finest ‘driver’s cars’ out there. 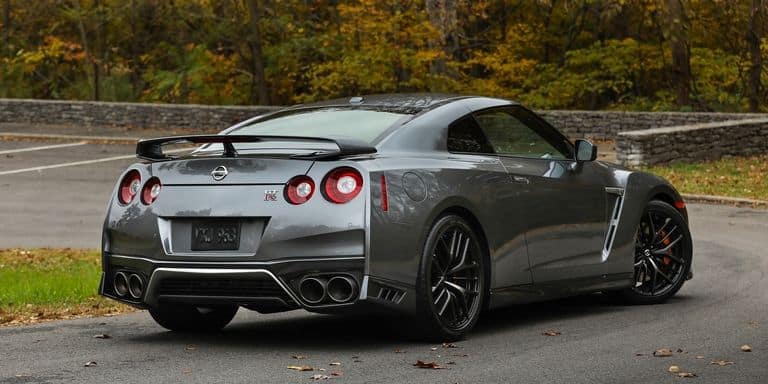 Do you want speed, handling, reliability, and Japanese build quality? The Nissan GT-R is perhaps one of the best AWD sports cars currently available.

The GT-R comes from the Skyline family which, back in the day, could be tuned to well over 1,000+ horsepower. We know the car has a great pedigree, and now Nissan has taken the idea and made it better.

Engine specifications are similar to the 911 as well – a hand-built 3.8 liter twin-turbo V6 making 565 horsepower hides under the hood; it’s no wonder they call it Godzilla – it’s a monster! Surely, this has to be the ultimate performance AWD sports car?

The looks are all ‘mean & moody’, but Nissan knows that aerodynamics plays such a big part in the handling and performance that they’ve sculpted the GT-R to perform at the maximum, and it works very, very well. 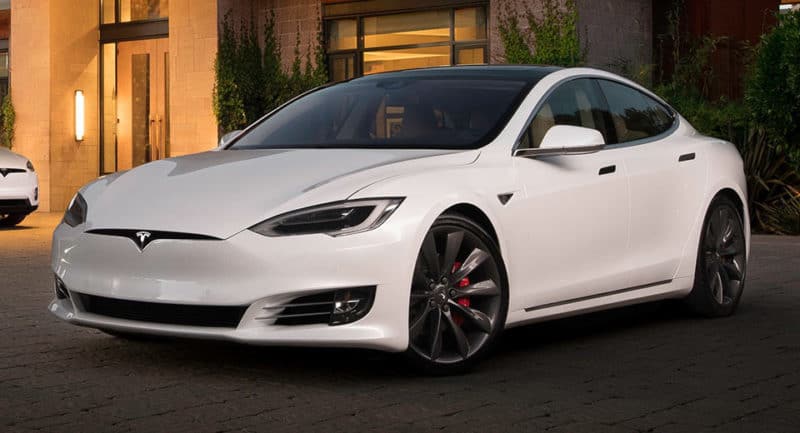 Forget ridiculously short mileage, speeds that would make a golf cart seem fast, or even styling that’s been designed to eek out every last bit of performance; the Model S is definitely the future.

There are a number of features that make the Model S P100D quite so spectacular – the battery is a 100-kWh pack (as an example, the best selling Nissan Leaf uses a 30-kWh battery). All of the weight that comes from the batteries and running gear is centered low down, meaning that handling has been boosted thanks to a low center-of-gravity. And of course, it has all the latest toys and tricks, too.

The P100D is capable of a zero to sixty dash in just 2.5 seconds (quicker even than the benchmark 911 Turbo S), has autonomous driving and enough technology to satisfy … well, anyone, really.

The weakest feature of the P100D is the $134,500 price tag, though it is said that range is around 315 miles per charge. Of course, if you start spanking that acceleration, that range will diminish pretty quickly. 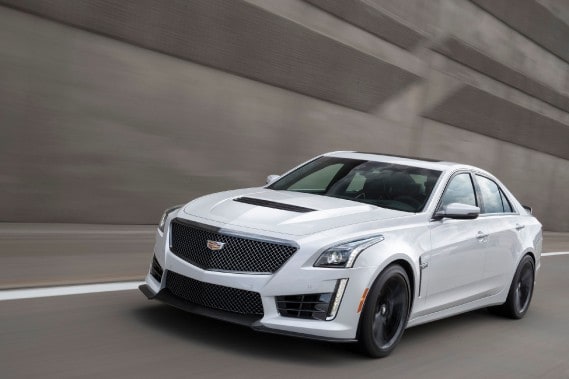 A supercharged 6.2 liter V8 sits under the hood, it makes 640 horsepower, and will reach speeds in excess of 200 mph should you have access to a racetrack long enough to do it.

There are other European models that possibly have a better pedigree (the BMW M5 for example), but the fast Caddy doesn’t disappoint as an AWD sports car and it’s around $10,000 cheaper than the Bimmer.

What’s more, the interior is luxurious; it features plenty of leather, supportive sport style seating, and even some decent tech – WiFi and a rear-view camera, for example. It has an ace up its sleeve, though, in the form of active fuel management, meaning that using it as an everyday driver is possible.

Sticker price starts at $85,995 for the base model, and you still get the big V8 under the hood. As for the style … Cadillac has made it look aggressive without being too over the top – it sits low and wide with quad exhausts poking out the back throwing down delightful pops and gurgles all day long. 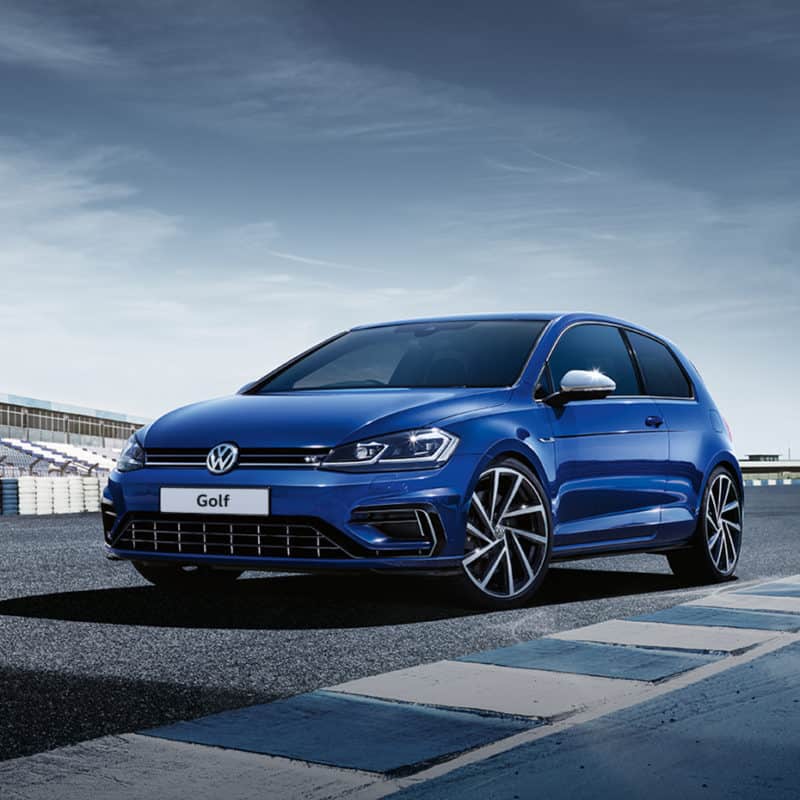 Not quite in the market for a $100,000+ vehicle? The Golf from Volkswagen is a contender for the practical AWD sports car market, especially when you consider the screen price of around $40,000.

Sure, when compared to a 911 (or any of the vehicles listed here) it looks a bit … plain Jane, but that’s part of the appeal! It doesn’t need to shout its presence at you and it knows it’s an understated pocket rocket – a pocket rocket with close to 300 horsepower thanks to the 2.0-liter boosted four-cylinder motor.

There are at least a few things about this car that could stand to be…upgraded, however. The four-banger may be spritely, but it doesn’t compare to the rush of a more powerful V6 or V8. Also, it looks tall and ungainly rather than squat and muscular. That said, there’s no doubting that the Golf R makes sense in the real world.

As you’d expect from VeeDub, the build quality and reliability would shame most manufacturers, as would the level (and quality) of equipment fitted as standard.

It’s never going to be a lap record holder, but this AWD sports car has enough go and is stylish enough to be included here … just at the bottom end of the market. 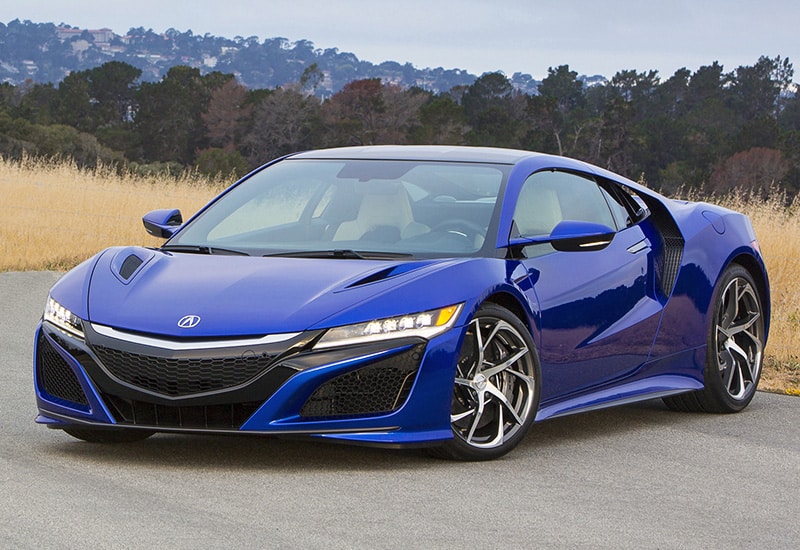 Re-introduced by Acura back in 2016, the NSX is made of myth and legend – perhaps the most notable being that Ayrton Senna helped to develop the car and driving dynamics.

Being so modern, it’s packed with tech and features. It’s 573 horsepower punch comes from a hybrid powertrain that includes three electric motors and a mid-engine 3.5 liter twin-turbo V6 mill – this is proper super car performance wrapped up in an AWD sports car package.

Just as impressive is the stated figures for gas economy – 21 mpg in the city and 22 mpg on the highway – that’s not bad for a 570+ hp kick.

Price-wise, it’s coming close to the higher end of the market, with the sticker price starting at $156,000. 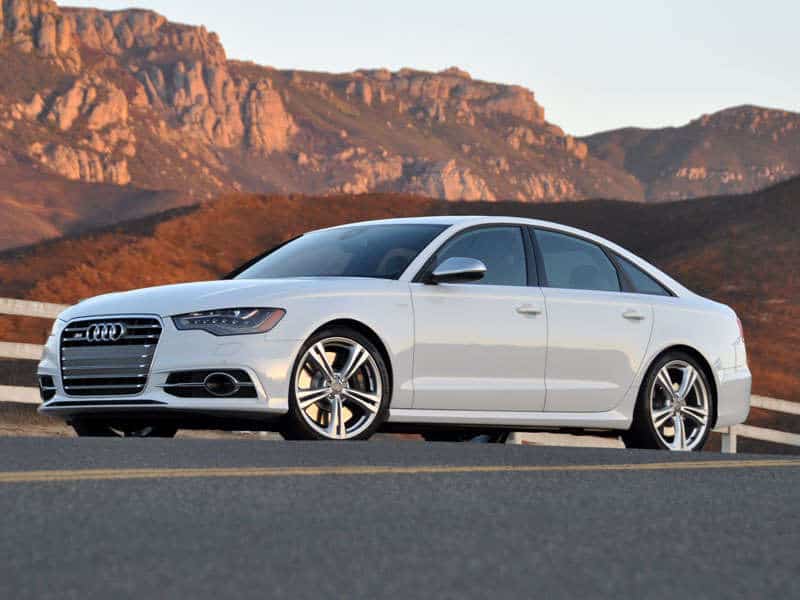 Not quite a sleeper, but the Audi does disguise itself pretty well – it isn’t all shouty and flamboyant – it’s another AWD sports car cloaked in sensible clothes.

If you’re looking for comfort, build quality, performance and plenty of room, this sedan is made for you. Think of it as a business suit made from Kevlar – it has all the style and sophistication, backed up with some knock-out performance.

You may think it’s a little down on power compared to some of the competition, which in reality it is – other manufacturers are getting around another 100hp from there FI mills, but it’s enough to ‘make progress’. 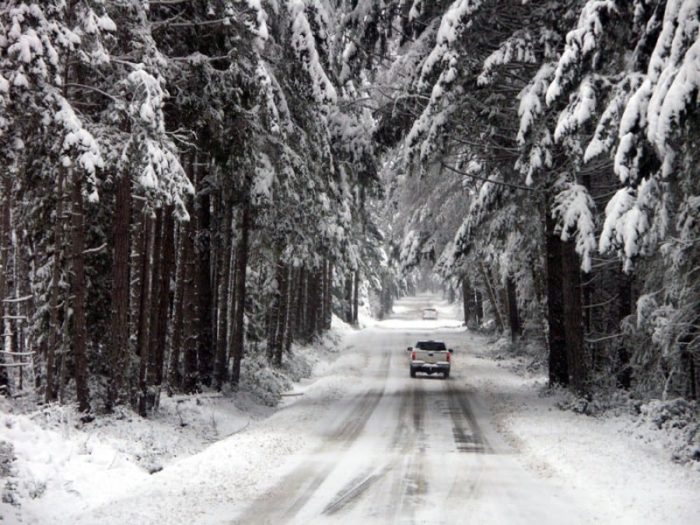 If you live somewhere where winter is a real season, AWD can be a lifesaver. But before you buy your first AWD car, we’ve assembled some tips for you.

It’s important to know exactly what it is that you’re buying, what to expect, and what your AWD vehicle can and can’t do before you head out to the dealership.

Keep An Eye On Costs 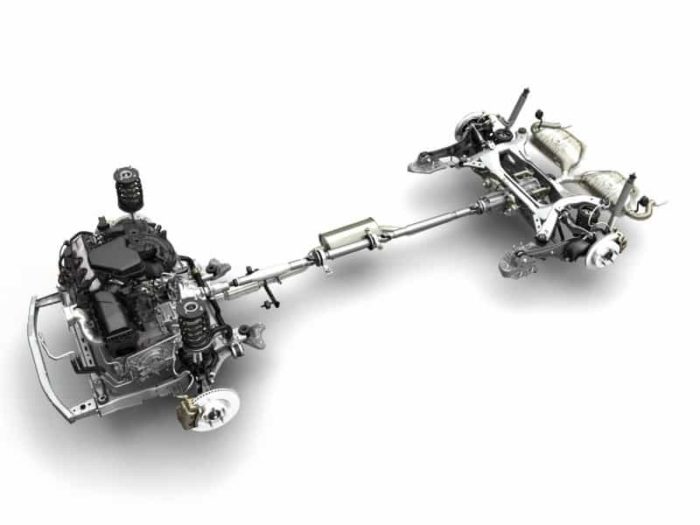 Not only will you pay more to purchase an AWD at the dealership (versus the two wheel drive version of the same car), there are other costs you will incur. First, driving all four wheels all the time requires the engine to work harder, which means fuel economy will decrease. Second, the components that comprise the AWD are expensive, some very expensive, so should they require repair, it won’t be cheap. 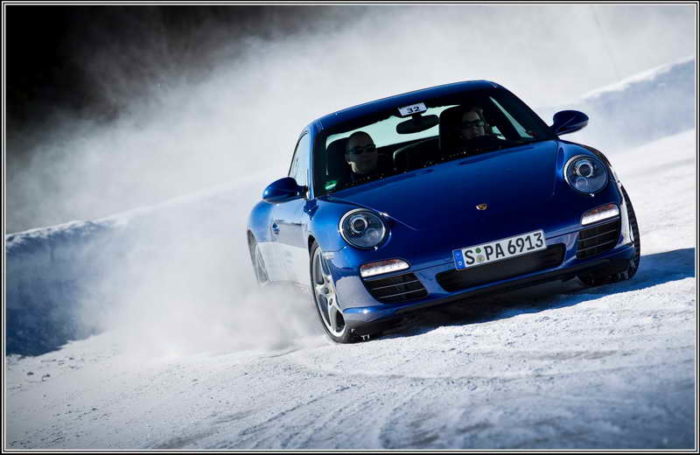 AWD systems that are mounted to FWD vehicles typically have a different torque split (how much power goes to each wheel) than a performance-oriented RWD car like a BMW or Mercedes, which sends less power to the front wheels so as to maintain a more RWD driving experience. So make sure you know what to expect from your AWD car before you first drive into inclement weather.

AWD Is For Going, Not Slowing 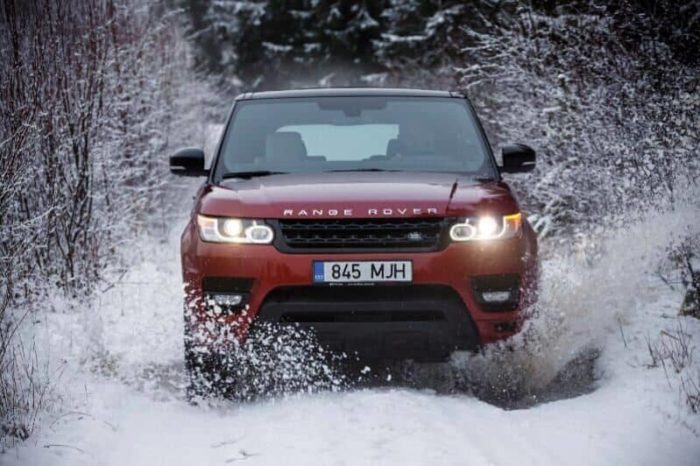 AWD does a great job of putting the power down, which is why the fastest sports cars have AWD, but it isn’t a help in slowing or turning. If you want to improve your braking in deep snow or loose gravel, switch off your ABS (if possible) as locked wheels will slow faster on those surfaces by locked brakes building a pile of snow/gravel in front of them. 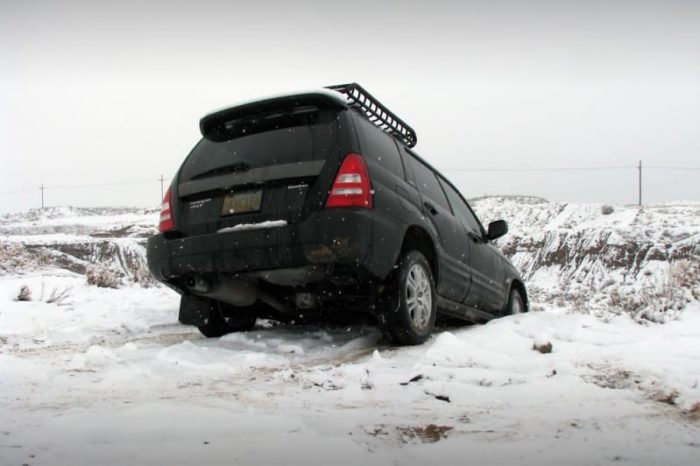 A friend in Denver reported to me that when the first snowfall hits each year, it was AWD vehicles that were the first to slide off the road. It used to be limited pretty much to SUVs, but as Cross Overs and AWD cars have become more popular, they’ve been joining the SUVs in the center median. Even a Land Rover won’t save you if you’re driving as if your car will do all the thinking for you.

The Need For Symmetry 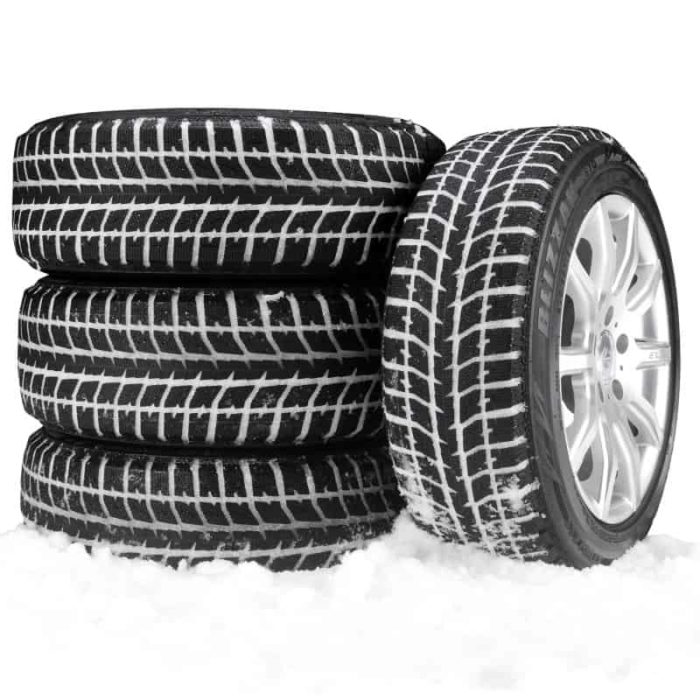 AWD depends on your four tires being the same circumference. If they’re not, it can accelerate wear of the AWD components. Of course, you saw, I’d always replace tires with the OEM size. The did you know that the difference in diameter between a completely worn tire and a brand new tire of the same brand and type have enough of a difference in circumference to effect more sensitive systems. And further, different brands can have different diameters in the exact same size. The best advice is to buy four tires at once as close to the overall diameter of the original tires as possible. 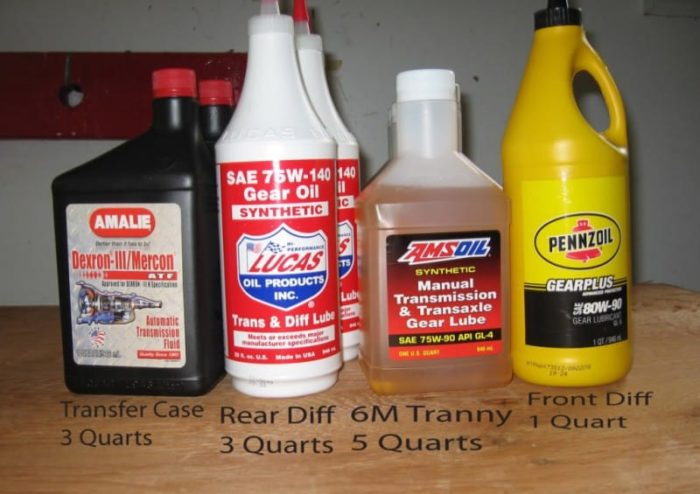 Believe it or not there may be as many as four different lubricants required to maintain your AWD system (engine oil, transmission fluid or manual transmission oil, central differential (transfer case) lubricant, and front and rear differential lubricant. When it comes time for a major service on your AWD car, make certain that the technician doing the work knows which lubricants are required and has them in hand before he or she starts their work. 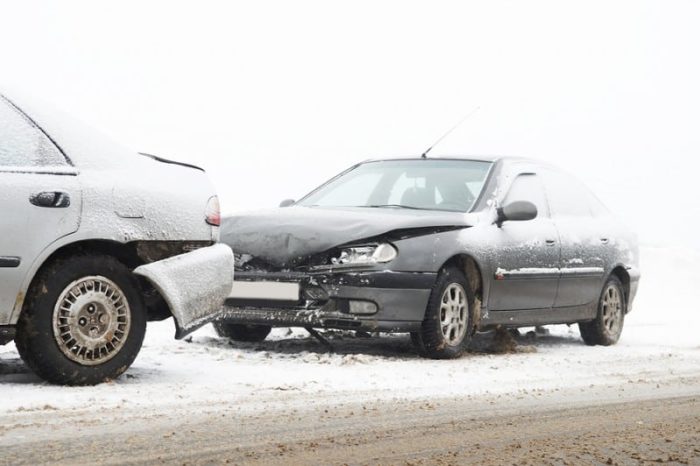 No, this is not going to be advice about what you should carry that in your car in the winter. It’s advice to  be prepared for non-AWD to trigger an accident (or an AWD driving too fast). Remember, you have better acceleration capabilities than many other cars so you need to watch out that you don’t get sucked into their accident.

Truth be told, the market for fast AWD cars has never been stronger, nor have the offerings from manufacturers. All of the cars listed here could be (at a stretch) considered to be practical, at least in the way of reliability and comfort.

Choosing something like the Porsche to run the family around in wouldn’t be ideal, and equally, expecting the Golf to keep up with properly fast AWD sports cars would be nonsense, but they all have their uses and own little niches. You need to understand what it is you need from a car and make your choice from there.

It seems that most of the larger manufacturers now supply All Wheel Drive sports cara, and while brand loyalty can play a large role in some decisions, so do budget and styling – at the end of the day, only you know what’s right for you.