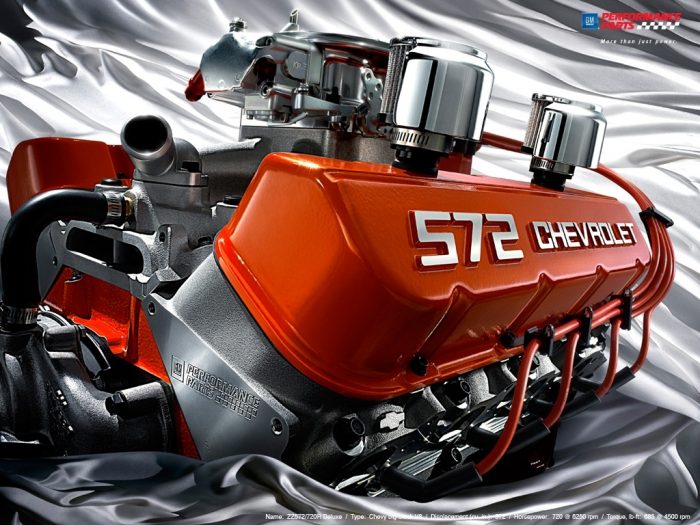 It’s well-know that there are a variety of Chevy Crate Engines. But can you believe that the company offers 70 different versions? And 69 of them are V8s, with only one four-cylinder engine available – the turbocharged LTG that develops 272 horsepower. At the other end of the spectrum is the LSX454R Chevy Crate Engine that produces 776 horsepower from an LS Small Block – at only $27.50 per horsepower.

Our list of Chevy Crate Engines begins at 535 horsepower and tops out with the LSX454R. The sharp-eyed will notice that we skipped over a couple of engines, for example versions of the LSX and ZZ572, in order to broaden the list and expose the variety of high-performance motors available from Chevrolet. 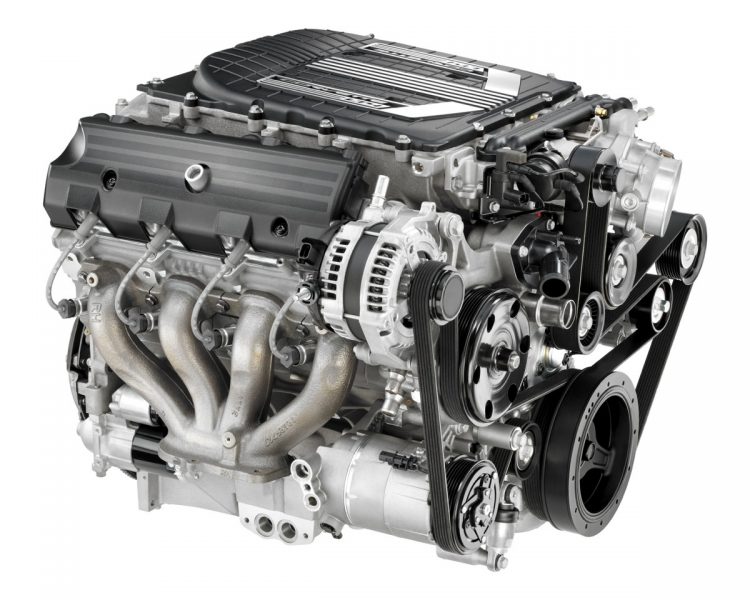 The LT376/535 Chevy Crate Engine is built on the latest Gen 5 engine platform. The design builds on the technologies and capability of the LT1 6.2L that had been offered in the 2014 Corvette. Literally only a handful of parts carry over from the Gen 4 engine – every component was designed specifically for the new Gen 5 engine platform. The naturally-aspirated LT376/535 Chevy Crate Engine develops 535 horsepower at 6300 rpm and 470 lb-ft of torque at 4600 rpm.

Cast from 319-T7 aluminum, the LT376/535 cylinder heads feature large straight CNC-ported rectangular heads that incorporate a slight twist that leads to a better fuel/air mixture in the 59 cc combustion chamber. With the application of direct fuel injection a centralized spark plug design can be utilized, which results in more complete ignition of the fuel/air mixture, and better fuel delivery.

The engine block is cast in aluminum with six-bolt, cross-bolted main caps securing a crankshaft is forged from a 1538MV twisted steel and features induction hardened journals. The connecting rods are forged powdered metal to which several finishing machine operations are applied. Hypereutectic aluminum pistons, unique to each side of the engine due to the flycut for valve clearance, deliver the power to the crankshaft. Compression ratio is 11.5:1. The 2.13-inch intake and 1.59-inch exhaust valves are operated through the direction of an aggressive high-lift LT1 billet camshaft.As a result the LT376/535 delivers more naturally-aspirated horsepower than its predecessors. 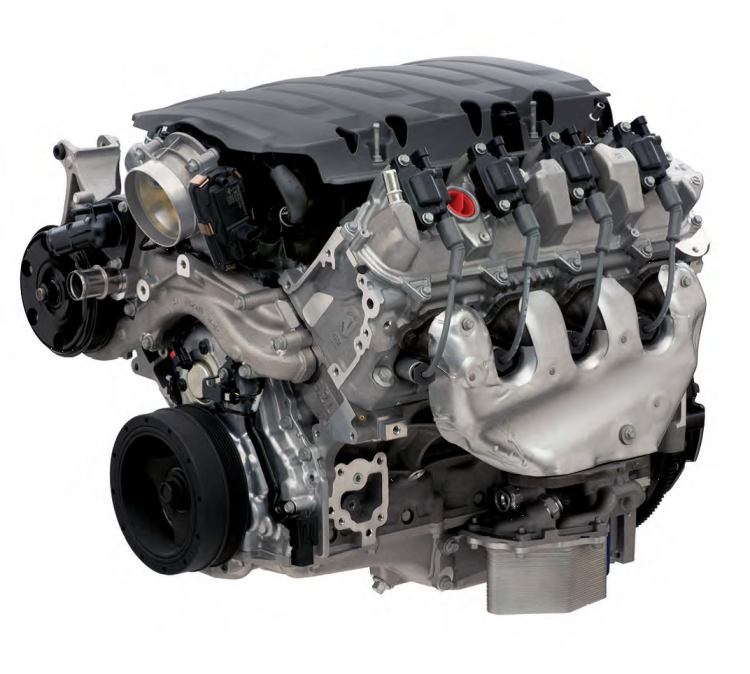 While all of our other engines in this countdown are from the bowtie brand, this entry is from the Cadillac Motor Car Division. The 6.2 L supercharged V8 engine from the Cadillac CTS-V delivers 556 horsepower with a high level of refinement: smooth, quiet, and well-balanced.

Significantly less costly than many of the other engines on this list, it could be the sleeper motor when searching for a Chevrolet Crate Engine. 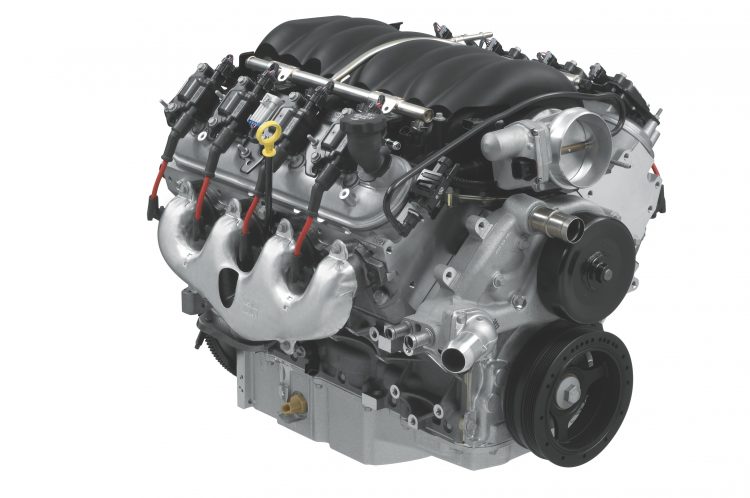 You’ll find little argument that the Chevy 454 V8 big block was among the most legendary high performance engines in muscle car history. Chevrolet Performance engineers were able to build a modern 454 Chevrolet crate engine not by replicating the almost 700 pound behemoth of the 1960s, but rather apply their expertise to build a big displacement hot rod engine out of a modern LS Small Block.

Besides the weight advantage, the LSX454 will easily slip under the hood of a mid-sized car from the 1960s or 1970s, and feat that might require parts of the vehicle to be cut away to fit an old school 454 Big Block. In addition, the LSX454 produces 627 horsepower at 6300 rpm and 586 lb-ft of torque at 5100 rpm according to the engine dyno.

Based on the Gen IV Small Block, Chevy engineers punched the motor out to a full 7.4 L with a bore of 4.185-inches and a stroke of 4.125-inches. The block is an LSX cast-iron item with six-bolt, cross-bolted main caps, a 4340 forged steel crankshaft, 4340 forged steel connecting rods, and forged aluminum pistons. Deep-breathing LSX six-bolt cylinder heads feature valves that are 2.20-inch titanium on the intake side with 1.61-inch sodium-filled exhaust stems. A very modern approach to a classic monster motor. 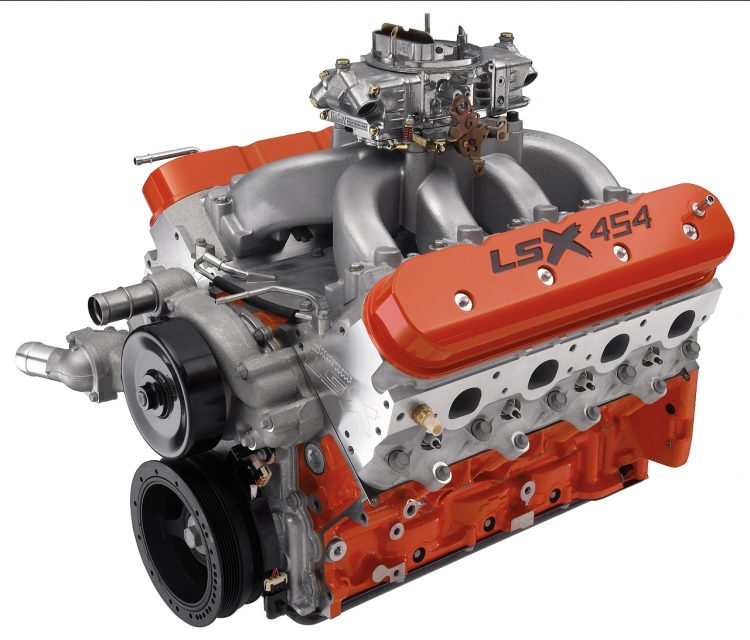 Engineered originally for the 2009-2012 Corvette ZR-1 supercar, the LS9 delivers 638 horsepower, 604 lb-ft of torque. The key to making all that power is a sixth generation Eaton R2300 supercharger running at 10.5 psi of boost through a liquid-to-air intercooler setup.

Based on the LS-Series Gen-IV Small Block V-8, cast in aluminum with six-bolt cross-bolted main caps. The crankshaft is of forged steel with a nine bolt flange. Rods are forged titanium while pistons are forged aluminum. Cylinder heads are aluminum L92-style ports with 68 cc chambers. Valves consist of a single 2.160 titanium intake valve and a 1.590 sodium-filled exhaust valve per cylinder. Compression ratio is 9.1:1 and requires 92 octane gasoline. Power is rated at 638 horsepower at 6500 rpm and maximum torque of 604 lb-ft at 3800 rpm.

Being of a dry sump configuration, the purchaser will need to acquire an oil tank as well as provisions for the superchargers liquid cooling system. In addition a Connect & Cruise Powertrain System is available to install the LS9 performance crate engine components, and many other Chevy Crate Engines, into older vehicles, making it an extremely desirable Chevy crate engine. 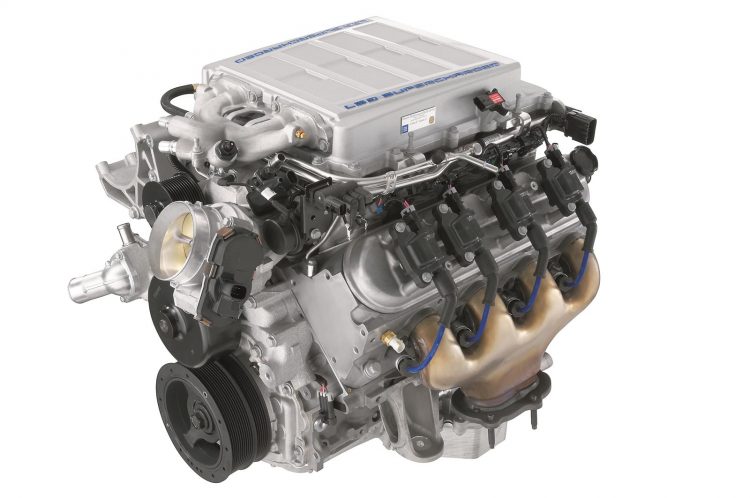 The LT4 supercharged 6.2L V-8 is the latest of the Gen 5 LS series Chevy Small Block crate engine offered to the general public by Chevrolet Performance. First installed in the 2014 Corvette, the LT4 crate engine differs little from its production twin. The supercharged 650 horsepower LT4 6.2 L V8 was the most powerful production car engine ever from General Motors when it was installed in the 2015 Corvette Z06.

The LT4 carries over technologies from the 2014 Corvette LT1 Gen 5 Small Block including direct injection and continuously variable valve timing. At the same time the LT4 is fitted with a new, more compact and higher output R1740 TVS 1.7L supercharger/intercooler assembly.

The forged steel crankshaft is secured by six-bolt main bearings. Powered-metal steel connecting rods are fitted to forged aluminum flat-top crown pistons. Compression ratio is 10.0:1. The cylinder heads are A356-T6 rotocast aluminum, with sizeable 2.13-inch intake and 1.59-inch exhaust valves. This version of the LT4 requires a separate oil tank as it is of dry sump configuration. The result is a surprisingly efficient Chevy crate engines capable of producing 650 horsepower at 6400 rpm and 650 lb-ft of torque at 3600 rpm.

While there are several versions of the ZZ572 available from Chevrolet, we’re only going to consider the most powerful version – the ZZ572/720R Deluxe, which delivers 727 horsepower at 6250 rpm and 680 ft-lb of torque at 4900 rpm.

It is the most powerful of all the Big Block motors in the catalog (lovingly referred to as the Rat Motor). Make no bones about it. This is a motor that’s as happy on the strip as it is on cruise night. In fact, Chevrolet makes the audacious claim that it will power your Bow Tie down the 1320 in the 9-second range. That’s quite a boast for a Chevrolet crate engine.

Chevy claims the true value of the ZZ572/720R lies in its ready-to-run status when it’s dropped off at your shop. No waiting weeks for an engine shop to build your motor. Instead Chevy delivers the complete engine (ZZ572/720R) fully assembled. You just bolt on the included Dominator-style 1150 CFM carburetor, along with a starter and fuel pump, and other performance parts, which are not included.

The ZZ572/720R is built with on a four main bolt Big Block with an all-forged rotating assembly, rectangular-port aluminum heads with 113 cc intake ports, and 2.25/1.88-inch valves. There’s also a solid roller cam shaft driving aluminum, roller type rockers.
And while the ZZ572/720R is barely tamed enough for occasional, limited street use, with its 12.0:1 compression ratio you’ll need to make sure fill-up with 110 octane gasoline before driving on over to the local cruise night. 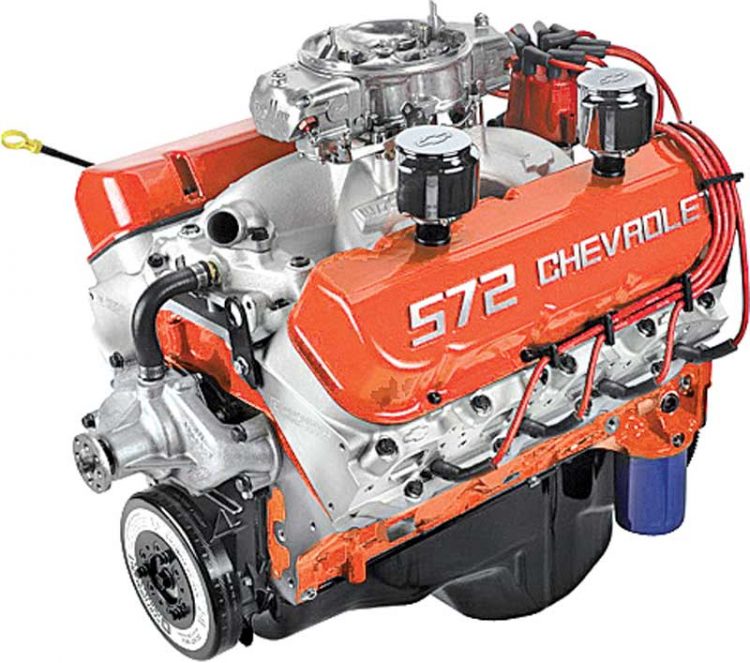 First and foremost, the Chevrolet Performance LSX454R crate engine, based on the LS series Small Block, is a drag race motor. It delivers an astounding 776 horsepower at 7100 rpm and 649 lb-ft of torque at 5100 rpm from its 454 cubic inches (7.4 L) of displacement.

Company engineers designed the LSX454R specifically as a Chevy crate engine targeted at the unique, high-rpm demands of drag racing. It’s only slight oversquare, leading one to believe the engineers were looking to strike a balance between combustion chamber size and torque.

And while Chevrolet rates the LSX454R at 776 horsepower in its naturally aspirated form, they claim there’s more power available with further (user) development.

The line of Chevy Crate Engines is unmatched, given the breadth, the reliable power generation, and the backing of General Motors. It’s certainly worth looking into a Chevy Crate Engine next time you build a project car, drag car, or street rod. 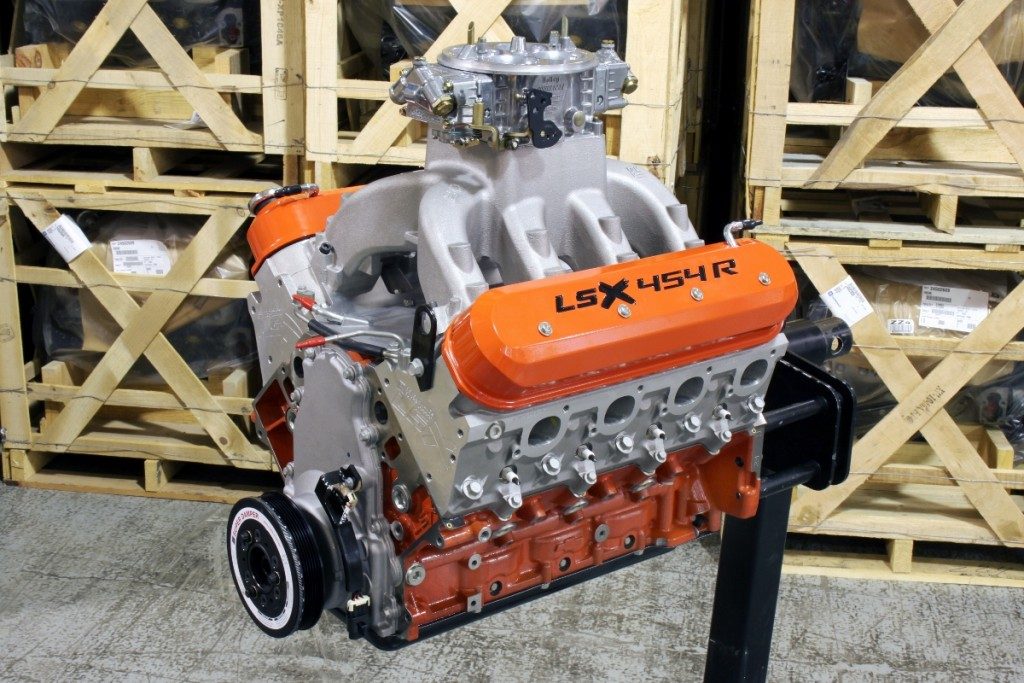 
10 Best Car Detailing Kits [Buying Guide]
10 Best Mechanics Toolsets [Buying Guide]
What is ECU Remapping and why you should do it.
How To Replace A Window Motor In 6 Easy Steps
Best Engine Degreaser for Cars, SUVs, and Trucks
How to Buff a Car: The Complete Guide