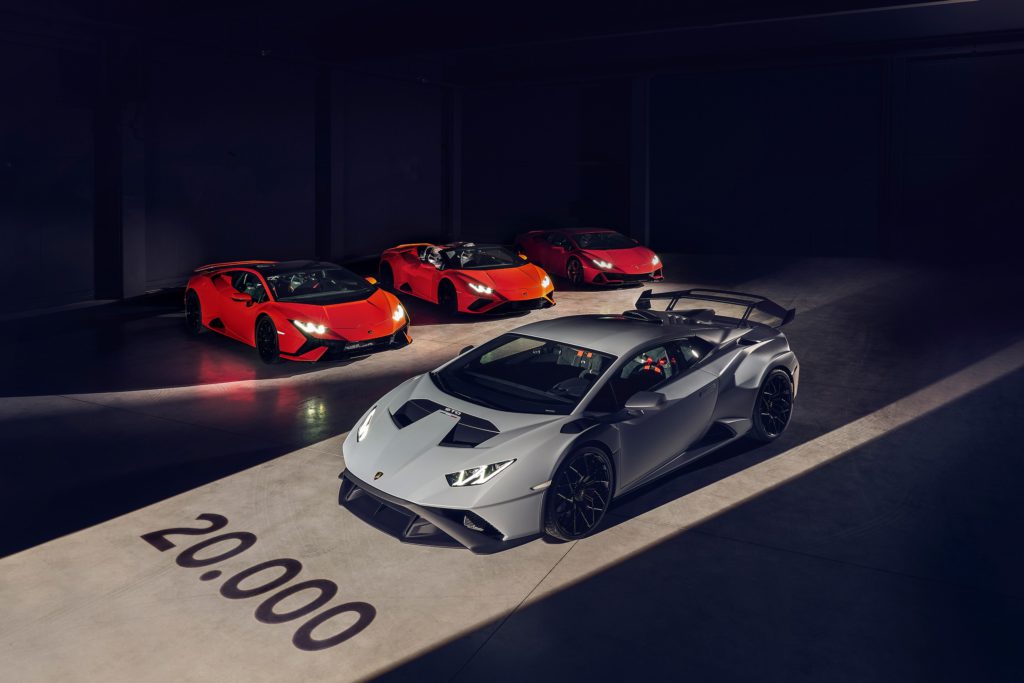 If you had told us eight years ago that 20,000 copies of the Lamborghini Huracan were going to be built, we’d have called you crazy. Lamborghini, after all, was a company that less than 20 years ago couldn’t sell 300 cars in a year. But here we are, and here is Huracan 20k, an STO in grey that’s bound for Monaco.

The Lamborghini Huracan replaced the Gallardo in 2014. Gallardo was the second Lambo designed under Audi ownership. It is where the raging bull really hit its stride in becoming more than just a brand you saw on posters but not on the road.

So Many Special Editions. Still So Special?

How many? Twelve versions, though we’ll only cover the big ones. Starting with the original LP 610-4 Lamborghini Huracan coupe. The debut car (sharing some bits with Audi’s R8) made 610-horsepower from its 5.2L V10 and could hit 60 miles per hour in three and a half seconds.

The second was a convertible, and you’ll notice that theme coming back. If there’s a special coupe, there is probably a special convertible wearing a Spyder badge.

Lamborghini’s next Huracan dropped all-wheel drive and 30 horses. The LP 580-2 sent all of its power to the rear in the name of driver engagement. That’s code for big, smoky drifts. It arrived in 2015 (the Spyder a year later), and had a special edition of its own called Avio.

There was also one built just for Pope Francis in 2017. We can’t confirm that he was spotted doing donuts around Rome, but the car was auctioned for charity soon after the gifting. Models for the Policia, airport follow cars, country-specific paint jobs, and loads of other ultra-niche cars came and went along the way.

With 640-horsepower, the Lamborghini Huracan Performante arrived in 2016. Active aero and more power from the V10 meant a quicker car and a Nurburgring record.

A facelift model showed up in 2019, called the Huracan Evo. Some new bodywork was fitted with the 640 hp engine. Then the company added rear-wheel steering, torque vectoring, and better body control computers. It got a 610 hp rear-drive variant in 2020.

Still 640 hp, STO means rear-drive, 60 miles per hour in 3.0 seconds, and more grip and less extra than any other Huracan.

What’s next? The Huracan isn’t being put out to stud just yet. Instead, there’s another special edition on the way.

It’s called the Lamborghini Huracan Tecnica. Positioned between Evo and STO, this $250,000 rolling sculpture is a bit of a greatest hits album.

A smaller wing than STO, it’s still plenty flashy. It has the STO’s 640 hp engine, drives the rear wheels, and has more downforce and less drag than the standard Evo. While Lambo expects the STO to be a track day special, Tecnica is meant for fast road work. So it has creature comforts like adaptive dampers.

There is one final version of the Huracan expected before the model is replaced. The rumors for that one are some of the strangest we’ve heard since Lamborghini first announced an SUV. A lifted model with underbody protection, following in the Safari style growing in popularity with Porsche 911 enthusiasts.

We can only imagine what that one might be like. Until we see it, raise a glass of prosecco to the highest-selling Lamborghini ever. At least until the Urus SUV hits 20k, which will probably happen next month despite it launching five years later.


Cadillac Sixteen Was One of the Most Expensive Cars of the M...
GM’s Buckle to Drive System Aims to Keep Motorists Belted an...
25 Most powerful Ford cars of all time (from 235hp to 1,200h...
Bentley Flying Spur Hybrid: All The Luxury with Less Guilt
The Coolest CAR-B-Q Grills Around for Cooking Out this Holid...
Most Expensive Cars of All Time