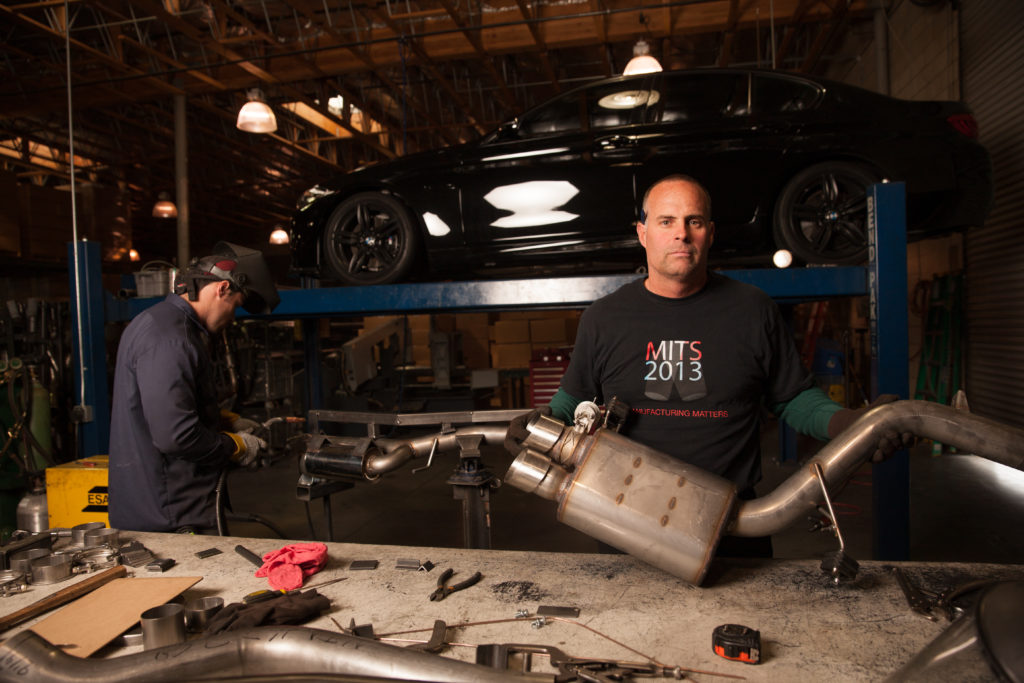 The 1980s were grim for American automakers. Over-complacent, inefficient domestic manufacturers, already hammered by oil crises in 1973 and ’79, were also losing market share to more affordable and fuel-efficient import vehicles, mostly from Japan.

Yet the very conditions that contributed to this so-called “Malaise Era” of U.S. automaking simultaneously presented opportunities to domestic manufacturers of aftermarket parts. A whole new market was emerging consisting of drivers who wanted to boost the performance and appearance of their new import rides which, while affordable and gas-thrifty, were often underpowered and unsexy.

A case in point is California’s flourishing Thermal Research & Development, which began as a humble muffler shop in 1983. Today, Thermal R&D is among the most respected and advanced exhaust manufacturers in the U.S., employing thirty people at a 25,000-square-foot facility in Lancaster, California that produces 700-1,000 largely handmade performance systems weekly. 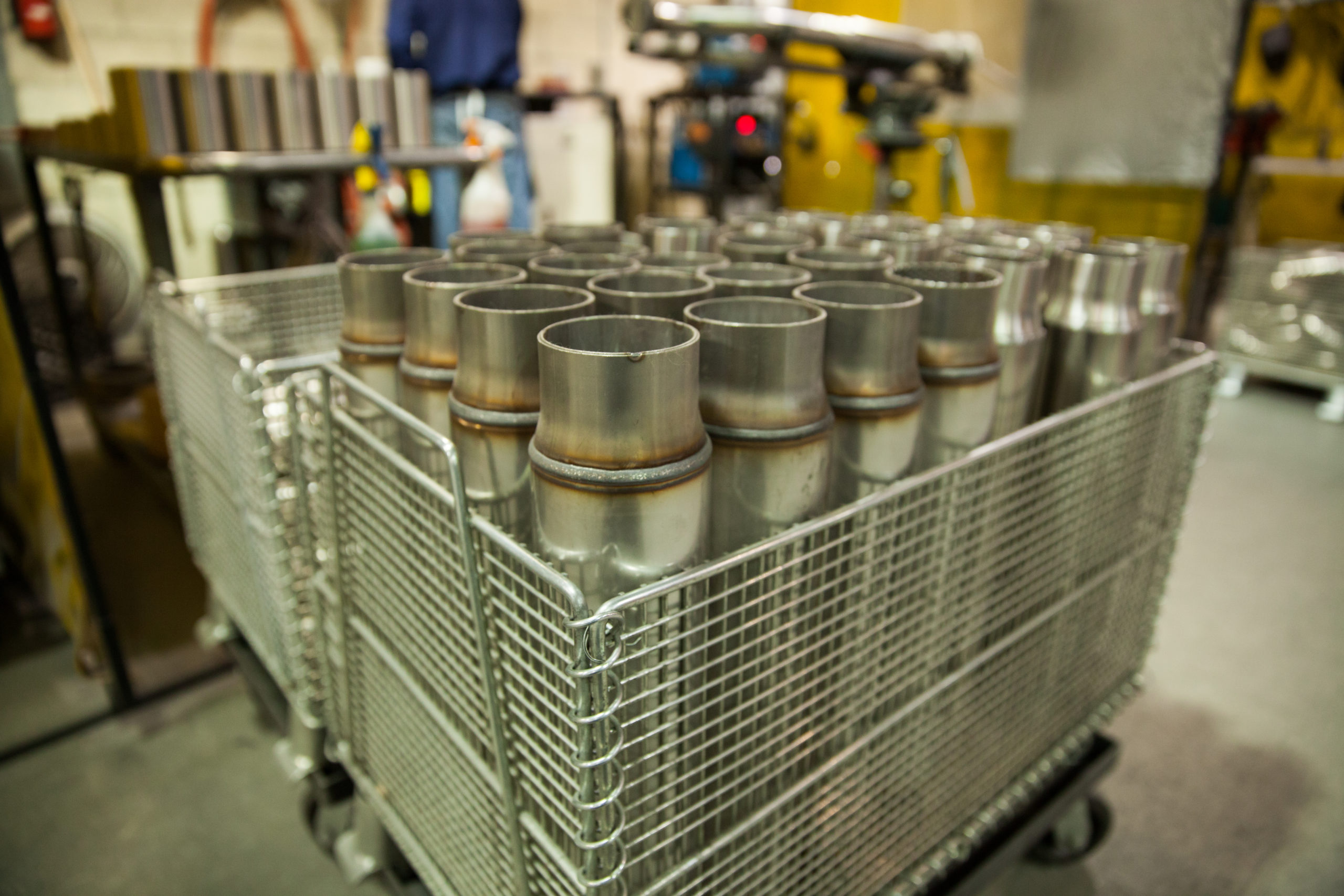 “It was a combination of being in the right place at the right time and having the skill set and the tooling to recognize what was coming and take advantage of it,” said Chuck Asher, founder of Thermal R&D.

What Asher saw coming was a desire among many owners to squeeze better performance, and just more all-around panache, from small but potentially sporty Japanese cars. He’d begun working at his brother’s muffler shop right out of high school, and within 18 months opened his own, California Muffler, in Canoga Park, California.

“In the mid-’80s, when the sport compact market started to come on board with a lot of the Japanese Acura, Honda, Toyota products I had quite a few customers who were in that field that wanted that type of work done,” Asher recalled.

Southern California boasts hot rod and drag racing subcultures stretching back to the 1950s. Modifying the Japanese imports that began pouring into the region in the late 1970s – Honda Civics and Preludes; Toyota Celicas, Corollas, and Supras; Datsun 510s; Mazda RX-2s and 3s etc. – was a natural evolution.

Initiated by young Asian-American enthusiasts in the city of Gardena, less than an hour from Asher’s original shop, soon a whole scene centered upon modding compact Japanese compact cars spread across the state and then nationwide. Alongside aftermarket paint schemes and engine carburation, modified exhaust systems were central to this vibrant new subculture.

Asher found himself increasingly working on performance upgrades rather than general service jobs and sensed that demand for the former was starting to outpace supply. In response, he shifted to actually manufacturing exhaust systems for “import tuner” customers. Once he began selling these nationally, he dropped the California Muffler name and Thermal Research & Development was born. 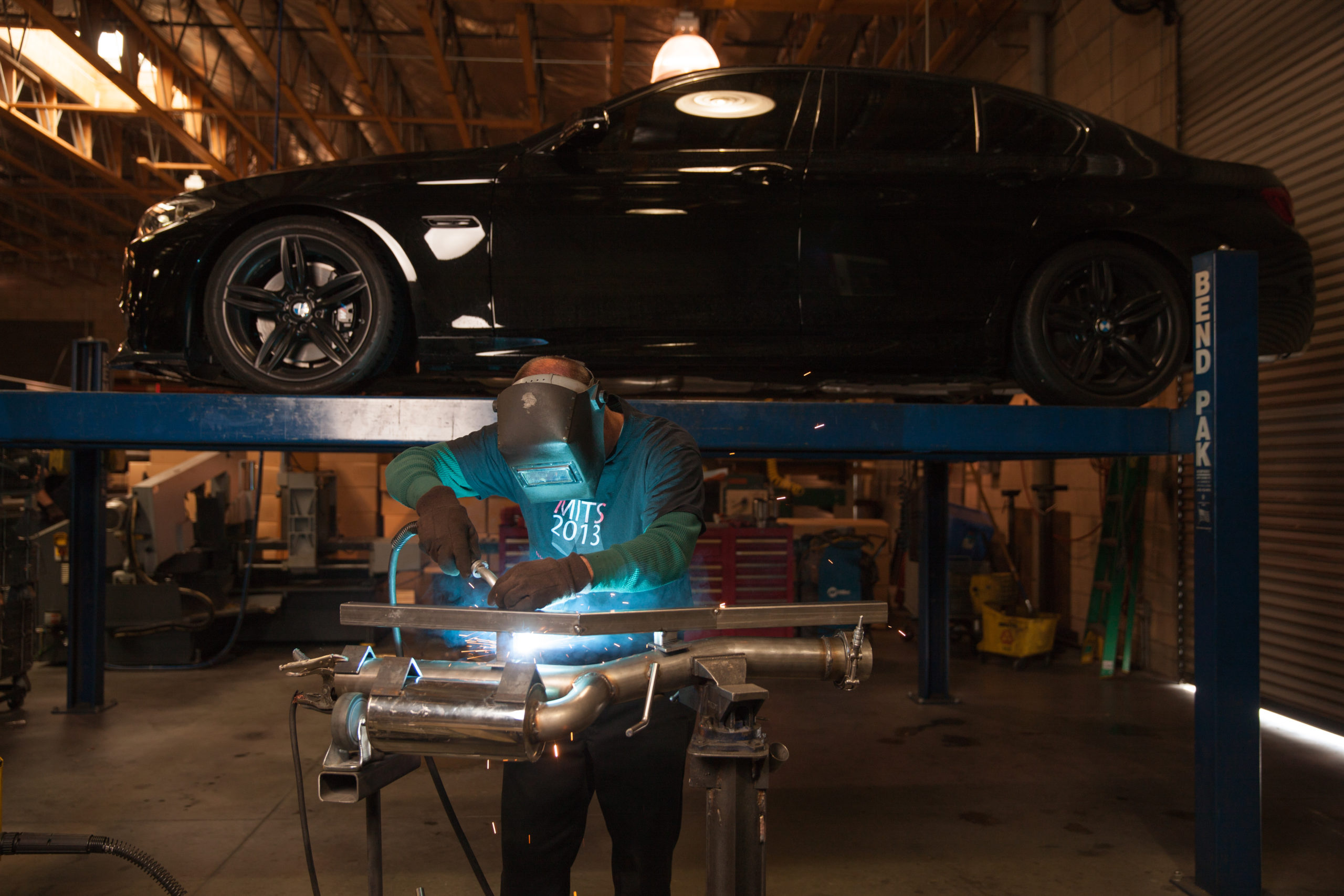 What initially put Thermal on the map was their extremely aggressive performance exhausts. Asher and his growing staff continually pushed the envelope of volume that they could get through a system.

“Thermal was really the world’s first company to come out with a 3-inch exhaust system for turbocharged four cylinders, at a time when vehicles were not made for anything of that size,” he explained. “We were even mocked by a lot of people in the market, and now pretty much everybody has pushed in that direction.”

Today, Thermal R&D specializes in complete, bolt-on “catback” exhaust systems, which connect to the back of a car’s factory catalytic converter, as well as making related components such as tips and mufflers. Ninety percent of their products are handmade, in-house, with only sub-products such as rubber hangers and gaskets jobbed out.

Customers include everyone from the U.S. military and high-end boutique automakers to off-the-shelf systems for mainstream models by Ford, GM, Honda, Jeep and more.

“Ford’s coming out with some nice enthusiast vehicles,” Asher explained. “So, for the Fiesta, the Focus, and the Explorer, we move a lot of product for that. And we’re getting ready to release Bronco, Ranger, and Maverick exhaust systems that we’re pretty excited about.”

Metal arrives at Thermal R&D in raw sheets, which teams of expert welders, polishers, and tube benders craft into its finished products. While some automation and CNC machining are employed to increase repeatability and reduce scrap, Asher said that “a lot of hard sweat and tears [and] old-school elbow grease” still goes into Thermal’s products, most of which come with a lifetime warranty.

On a completely stock motor, a Thermal R&D exhaust system will usually boost output by at least five horsepower and up to thirty-five, as well as substantially increasing torque in certain applications. “A lot of it depends on how under-exhausted the car is from the factory, as to how much you’re really going to pull out of a good-flowing exhaust system,” Asher said.

Crucial to Thermal’s success has been its incredibly meticulous attention to sound control and creating the ultimate clean exhaust “note” from its products. This allows drivers to really hear what their engine is doing at any given moment.

“When you start the car, you’ll have a good, aggressive sound, but not obnoxious,” Asher said. “The real goal in mind is performance – we’re trying to unleash the built-up horsepower in the motor and try to get it to flow better.”

By homing in on every part of the exhaust note – boosting desirable hertz levels and decreasing undesirable frequencies – through complex sound-canceling rather than by physical restriction, Asher has been able to increase the cubic feet-per-minute flow through a system without adding the weight of additional parts. This also keeps prices down and allows Thermal to retain American manufacturing, by not putting unnecessary, inefficient physical components on its exhaust systems.

“[Sound canceling] is a very technical way of developing the exhaust canisters to absorb those undesirable sounds; to reflect those sounds,” Asher continued.

This is where Thermal R&D really excels. For each new exhaust system they develop, an incredibly painstaking, hi-tech process of eliminating unwanted frequencies, mostly in the 100-180 hertz range, is involved. Having built a starter exhaust system with just minimal muffler and glass absorption, Asher and his team then mount this on a car loaded with multiple interior (and sometimes also exterior) microphones and computer mapping. Having mapped the exhaust notes/frequencies under all manner of driving behaviors, Thermal then uses both software and Asher’s four decades of trade knowledge to develop or modify devices on the system to maximize “good” sounds and minimize “bad” frequencies.

A new challenge in this regard is contemporary transmissions with as many as ten speeds, including three or four overdrives. Such gearboxes radically reduce RPM levels, resulting in the “intrusive” low-frequency drone sounds that Asher seeks to eliminate.

“That’s really not sounds that the motor’s producing as much as it is those that the sound waves going through the performance exhaust system are developing,” he added.

Banishing these frequencies leaves only crisp, clean acceleration sounds that allow a driver to stay truly responsive to their engine, especially during aggressive driving, and to avoid over-revving or lugging.

While Thermal’s early customers were principally in the 16 to 28 age range, its increasingly refined exhaust systems have gradually expanded that demographic, which today includes drivers well into their sixties. Like many aftermarket businesses, Asher experienced a surge in demand even among casual car enthusiasts during the 2000s, propelled in part by automotive reality TV shows like Top Gear and Pimp My Ride, and the Fast & Furious movie franchise.

“Things were growing very strong, [but] still in the import market,” he remembered. “That went very strong ‘til about probably the end of the 2000s, mid-teens, and then the Americans really got on board with domestic manufacturing and now they’re back building some pretty nice product as well.”

Asher continues to push Thermal’s eponymous research and development work, including reaching into new market segments, such as off-road, and unique “secondary” types of vehicles like the Polaris Slingshot three-wheeler (for which Thermal already offers exhaust systems, roof assemblies, and more).

“I believe that at Thermal we’re giving our end user a good product … that’ll last them generally longer than they’ll ever have the car,” he concluded. “The competition is always getting better; we always have to be better. That’s a driving force that keeps me thinking and keeps me sharp.”