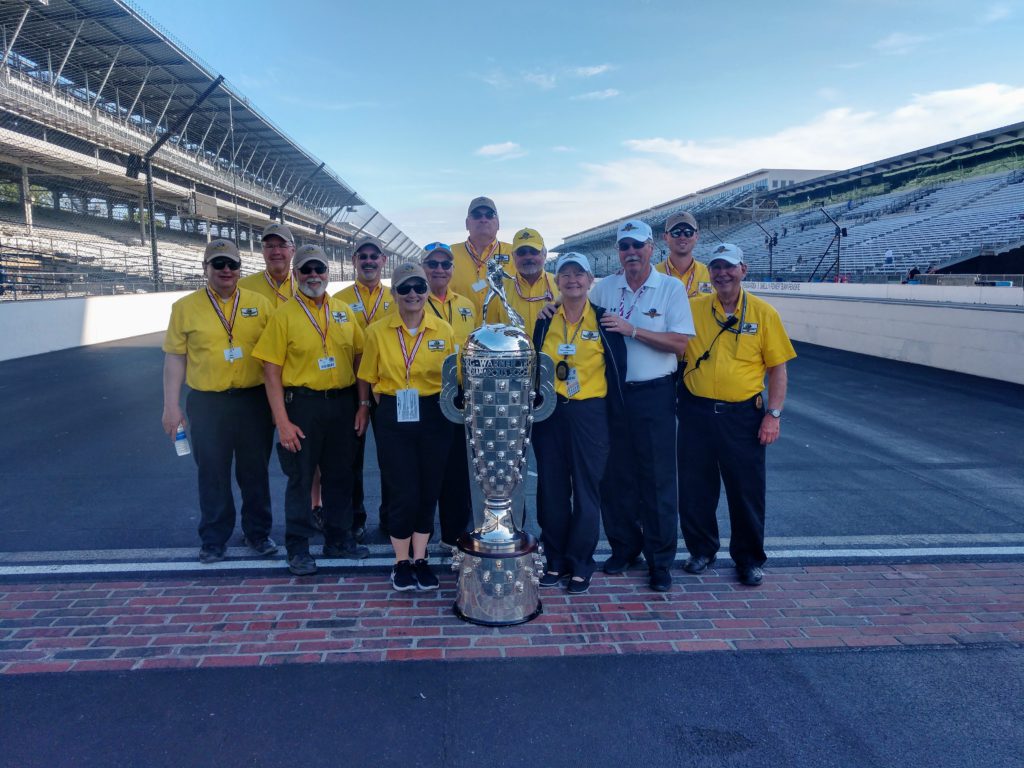 Several of the "Yellow shirt" workers pose with the trophy.

Imagine coming out west from Ohio for three NASCAR races each year but never getting to see a race, despite being at the tracks on race weekends. That is exactly what happens when Ken and Pam Lemmon make their annual west coast NASCAR track trek.

It all started after Ken retired as a transit manager from Akron, Ohio. He and his wife Pam did some traveling in retirement and two years later in 2008 while en route home from Florida they made a stop at the Indianapolis Motor Speedway. The racing fans had asked about the “yellow shirt” part-time track employees that helped out at the races and they were quickly recruited to sign up as workers.

Initially, they were thinking about helping with the NASCAR race later in the year but were hired on the spot to help with the Indy 500 race. It helped that the track was able to provide space near the track for the Lemmon’s fifth-wheel trailer since they live 300 miles away from the “Brickyard.” Over 300,000 people attend the races during the Indy 500, so part-time help is essential at the track.

Over time Ken was given more responsibilities and currently is the Garage and Pit Coordinator. His wife Pam also works part-time at the track. They have made several friendships at Indy and have some favorite drivers including Helio Castroneves and Bobby Unser.

Later Ken’s work earned some recognition and he was asked to help out, first at Chicagoland Speedway and then at the Las Vegas Motor Speedway. That was followed by an offer to assist at Phoenix Raceway and then Fontana, California Auto Club Raceway. It helps that these three tracks all form a three-week swing of NASCAR races in the spring.

Ken figures that they put 6,000 miles on their car following those three races. These days they stay at short-term rental housing near the tracks. They are paid a small wage for their efforts at each track.

But hard work earns recognition and the Lemons were then asked to help out at the Las Vegas track each November when the National Hot Rod Association (NHRA) holds their fall meet. Then they migrate back for the last race of the year for NASCAR, the Championship Four, in Phoenix, AZ.

When the Lemons came out to the Phoenix Raceway they donned the red vests that employees use at that track. They first worked the trams that helped transport visitors from the parking lots to the track. They had so much fun on the tram with the riders that customers would specifically wait for “their” tram to ride.

When the trams were discontinued, Ken was assigned the entrance to the infield Media Center, and Pam works inside at the auditorium/driver’s meeting room. It is their job to make sure only credentialed people gain access to these areas and handle any last-minute requests or concerns that pop up. As such, their responsibilities prevent them from actually seeing the races. They might hear the engines roar or catch a glimpse on the television, but they do not see the events live and in person.

Ken noted that during the race week at Indy, he typically is at the track by 5 AM and works until generally 7 PM or later depending on when the races are over.

Since most tracks only hold a few races each year, they have to rely on consistent part-time employees to fill a multitude of positions.  Matt Humphrey, head of  Track Communications for four NASCAR tracks, including Phoenix Raceway, said  “the institutional knowledge and dedication the Lemmons possess make my job so much easier in the media center. They know our media. They know our facilities. And most importantly, they care. Their professionalism and excellence shine through in their service, and we can’t do what we do without the commitment and dedication of many others like them who join our ranks during our race weekends.”

Track Experiences for the Racing Couple

The Lemmons love the friendships they have made over the years. The Lemmons were always fans of the local races in Ohio and after retirement, they started enjoying the NASCAR races in person before working at the tracks. Ken stated that he enjoys offering customer service and helping people. “If people leave with a positive experience, good for us.”

Working at tracks for both NASCAR and NHRA events, the Lemmons noted that the fans are not really any different. “They are all looking to have a good time and are friendly folks.” Despite sometimes having to stop people from entering restricted areas, neither can recall any serious disruptions or commotions at the tracks.

It seems weird to have fans travel across the country to various tracks and never get to see the race. But the Lemmons are not complaining, nor are the track managers who benefit from these part-time employees. They get to be an essential part of the racing community and develop lasting friendships and memories.