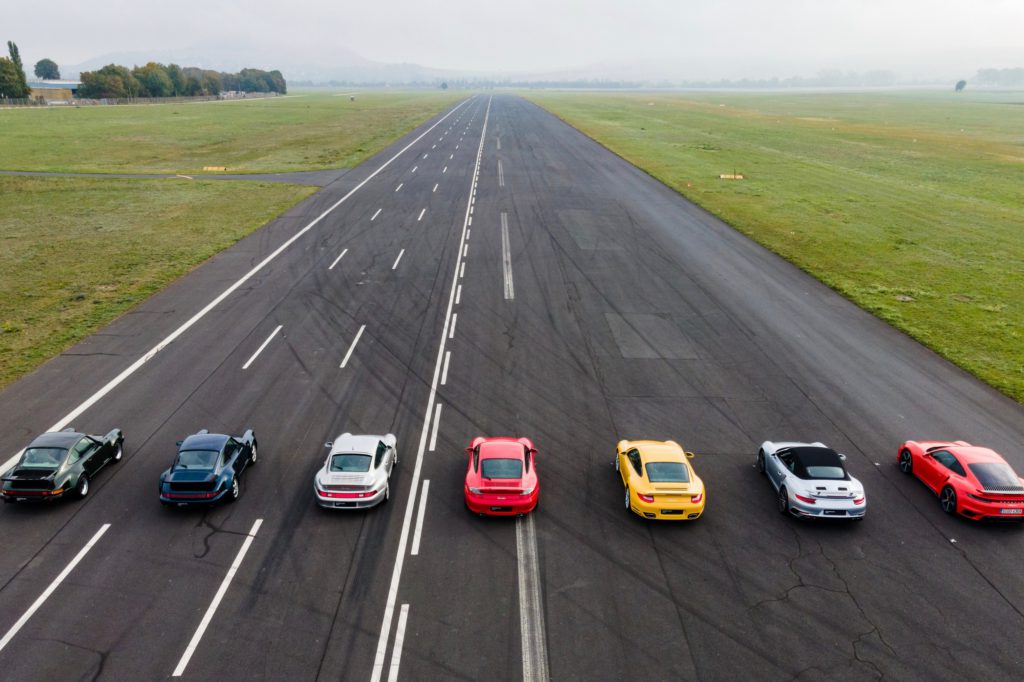 How much has the performance of the Porsche 911 Turbo changed over the years? There’s no better way to illustrate it than this: A head-to-head drag race with seven different 911 Turbo models lined up on a runway and ready to go.

We can all read a spec sheet and see how much more horsepower a newer car makes. That doesn’t help you know what it’s like in the real world. Drivability, gearing, tires, and a dozen other factors all come into play.

Since Porsche and Porsche’s fans use chassis codes to separate the different generations of cars instead of using model years like you might be used to, here’s a summary. A bit of a primer to get you ready for the big matchup.

930 is the chassis code for the first-generation of Porsche 911 Turbo. Launched in 1975, it came with a 3.0L flat-six engine and a great big turbocharger that made 260 hp. Way back then, it came with a four-speed manual. The particular car raced here is a 1988 model (the second-last year), meaning that it had the larger 3.3L, 300 hp engine and a Tea Tray spoiler instead of the whale tail of the iconic original.

Is Newer Always Better? Or Faster?

If you want more about each one, you’ll have to watch. The spec of each car, including which gearbox each one has fitted, is gone over in-depth. Plus, why some of the earlier cars aren’t Turbo S models like the later versions.

Before the race, we get to hear each one rev separately. It’s a great way to hear how much the 911 Turbo audio signature has changed.

But you’re here for the race. It goes as you’d expect, with the newer and more powerful (and all-wheel drive) cars leaving the rest far behind. There are some surprises, though, especially right off of the line.

There might be some missed shifts and other miscues. At least one perk of a more modern car becomes painfully apparent, with one driver experiencing some more severe issues.

It’s impressive to see how much difference there is between the oldest and newer cars. Even more surprising is just how close the more modern cars are.

Next up, some rolling-start races at different speeds. Taking the AWD advantage out of the equation but showcasing how much lag older turbocharged cars had and the importance of more gears in the box.

Last? A braking test. Each car had to stop from 100 miles per hour to see which could come to a halt in the least amount of space. Do larger brakes and stickier tires make up for the much heavier weight of modern Porsche cars? We can’t spoil the whole thing for you, can we?