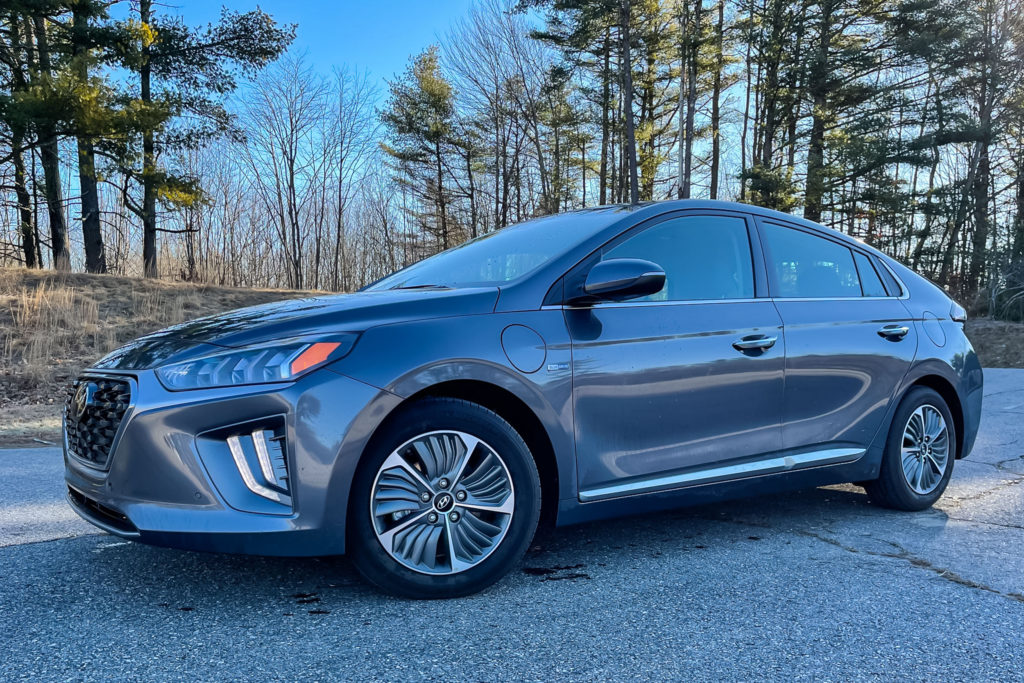 January 2021 was a Stellantis and V8-heavy vehicle test month in my neck of the woods. Mid-month, a Dodge Durango SRT showed up, and just two weeks later a Ram 1500 TRX growled its way into my driveway. Sandwiched in between those two piles of automotive red meat was something completely different — the salad course in between the cheese plate and the main dish if you will. I spent a week with the 2021 Hyundai Ioniq Plug-In Hybrid Limited, and it was quite the palate cleanser.

Because of the beefy vehicles that surrounded this car in my test lineup, it’d be easy to forget the Ioniq, but there are a few key factors that make the Hyundai a memorable vehicle, though one that is lacking in thrills. At first glance, it’s a normal-looking car with fairly mainstream styling. But it’s a normal-looking car that delivers incredible fuel economy. I drove the Hyundai Ioniq PHEV through heavy snow, used it as an impromptu moving truck, and ferried kids to school. The little Hyundai took it all in stride, and for the most part, made it look easy.

It might seem odd that a car with such narrow efficiency-minded tires would do well in the snow, but the Ioniq PHEV was remarkably sure-footed. Of course, it wasn’t Subaru-level sure-footedness, but it was far from stressful on the highway in very wintery conditions. It tracked fairly true and had little trouble with traction, despite the narrow tires.

The only real issue to speak of was with the sensors for various driver aids giving false alarms when covered with snow. Hyundai warns about in the owner’s manual, and it’s quite understandable, so it’s really just a nuisance that you’ll likely have to deal with on any modern technology-packed vehicle. 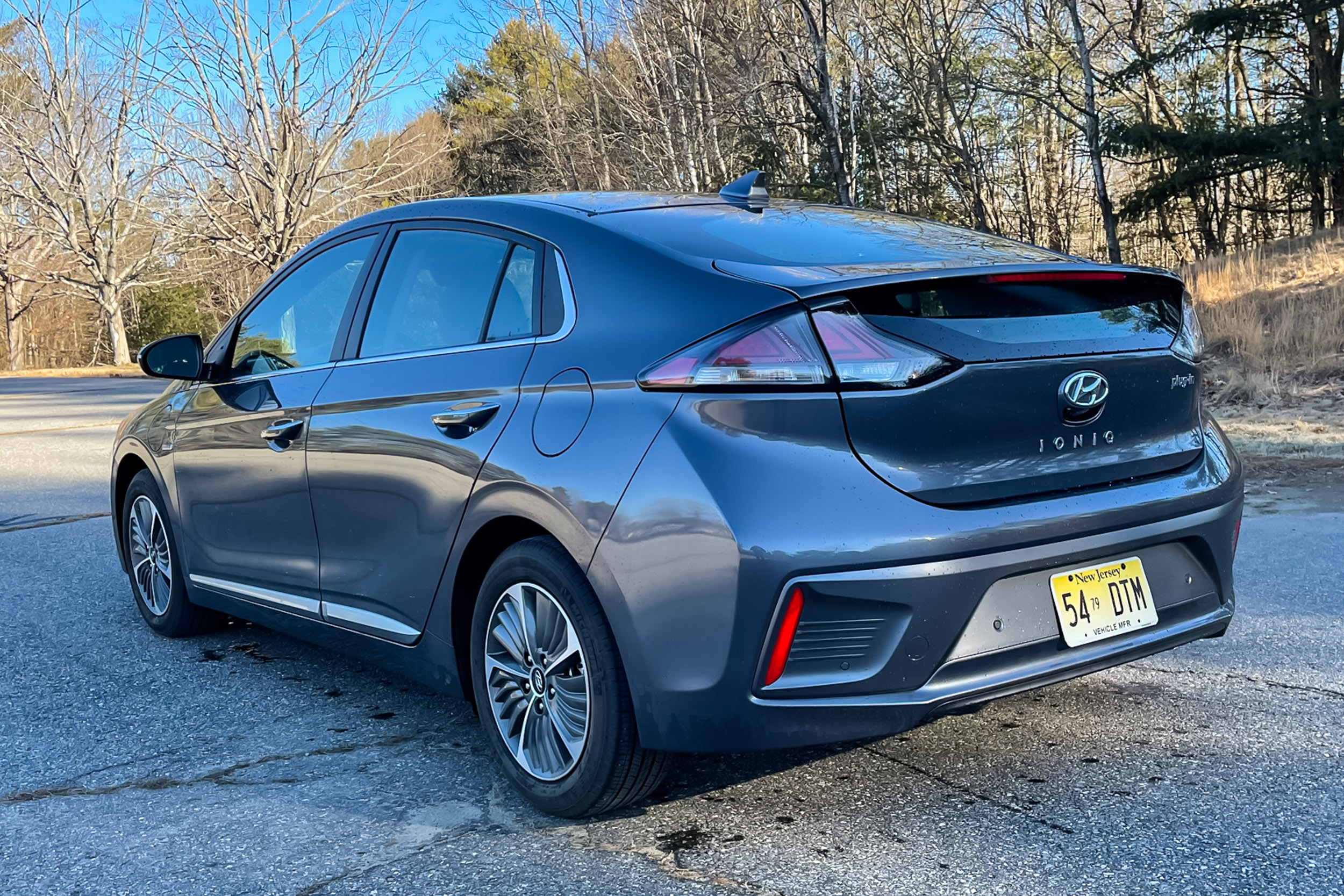 The 2021 Hyundai Ioniq can be purchased with either a hybrid, a plug-in hybrid (PHEV), or an all-electric drivetrain. The Ioniq PHEV is powered by a 1.6L inline-four combined with a 45kW (60 hp) electric motor that produces a combined 139 system horsepower. Power reaches the front wheels through a 6-speed dual-clutch transmission (DCT).

Now, before we go too far, it’s important to address the use of a DCT here. Most cars in this category use a continuously variable transmission (CVT), which I’ve always been quick to bemoan because they sometimes allow the engine to groan and moan under acceleration. I’m not suggesting Hyundai made the wrong choice by going with the dual-clutch gearbox, but the execution is slightly off in the Ioniq.

The Ioniq PHEV’s DCT has a tendency to stumble a bit at low speeds, which is exacerbated by the fact that there’s just not a ton of power to increase that speed. It’s almost as if the transmission is waiting on the engine to send some indication that it’s time to go but receives mixed signals and has trouble selecting a gear as a result. It’s not a massive problem, but it’s noticeable in stop-and-go traffic and when navigating normal traffic around town. 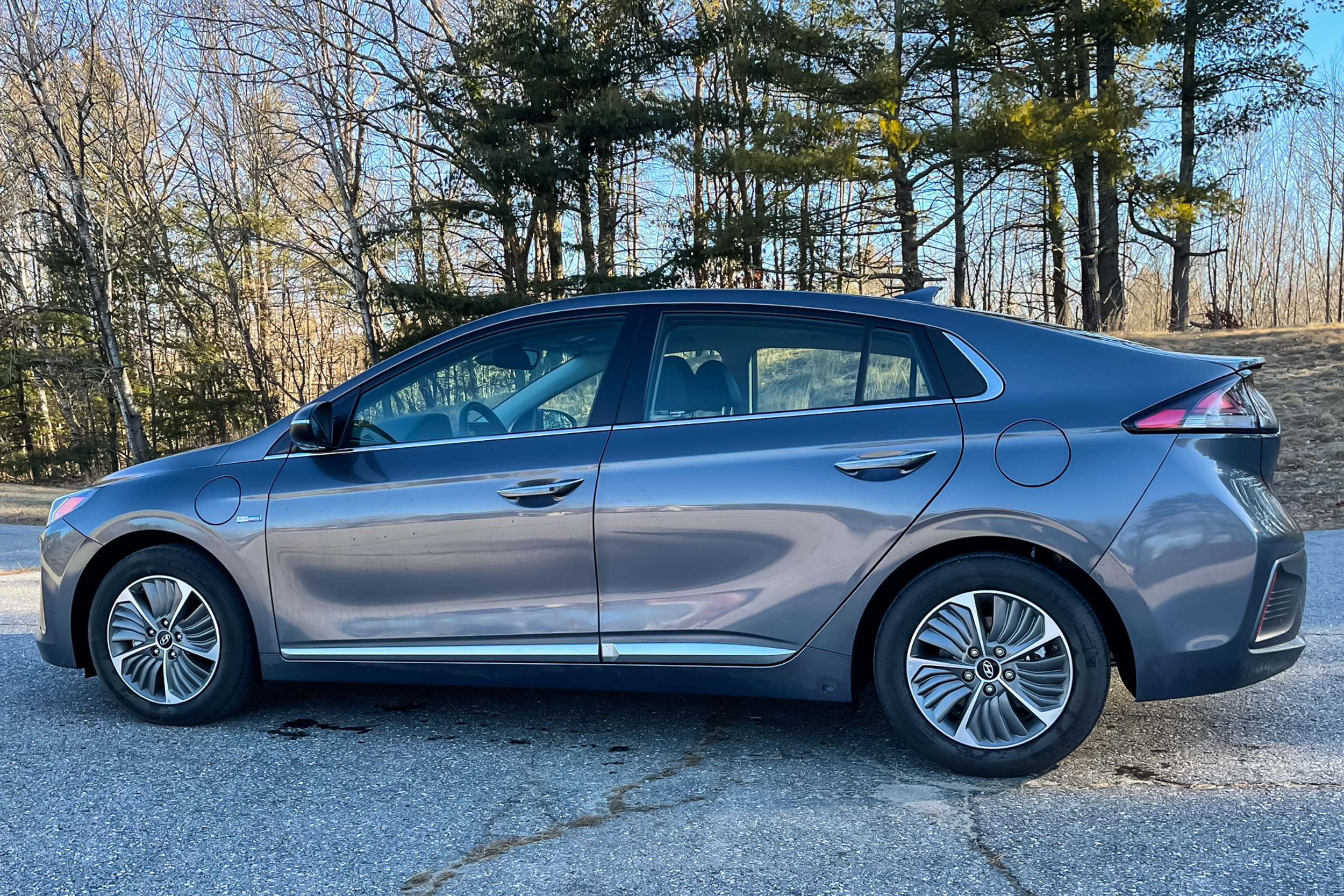 As for the engine itself, it’s easy to tell that the focus was placed on efficiency over performance, which was the right choice for this car. Even with a few fumbles from the gearbox, there’s enough power to scoot into traffic and to reach highway speeds, though passing takes considerable effort once you are up to highway pace.

One upside to that leisurely acceleration is the Ioniq PHEV’s snow performance. With a solid set of tires, the car finds its grip, and just goes. Ground clearance becomes a problem in deeper snow, but a freshly-plowed highway or city road presents little challenge for the front-drive Ioniq.

As the car accelerates, it shifts from running on its electric motor to the gas engine. The handoff between the two is smooth, and the whole package does its job quietly and without complaint. 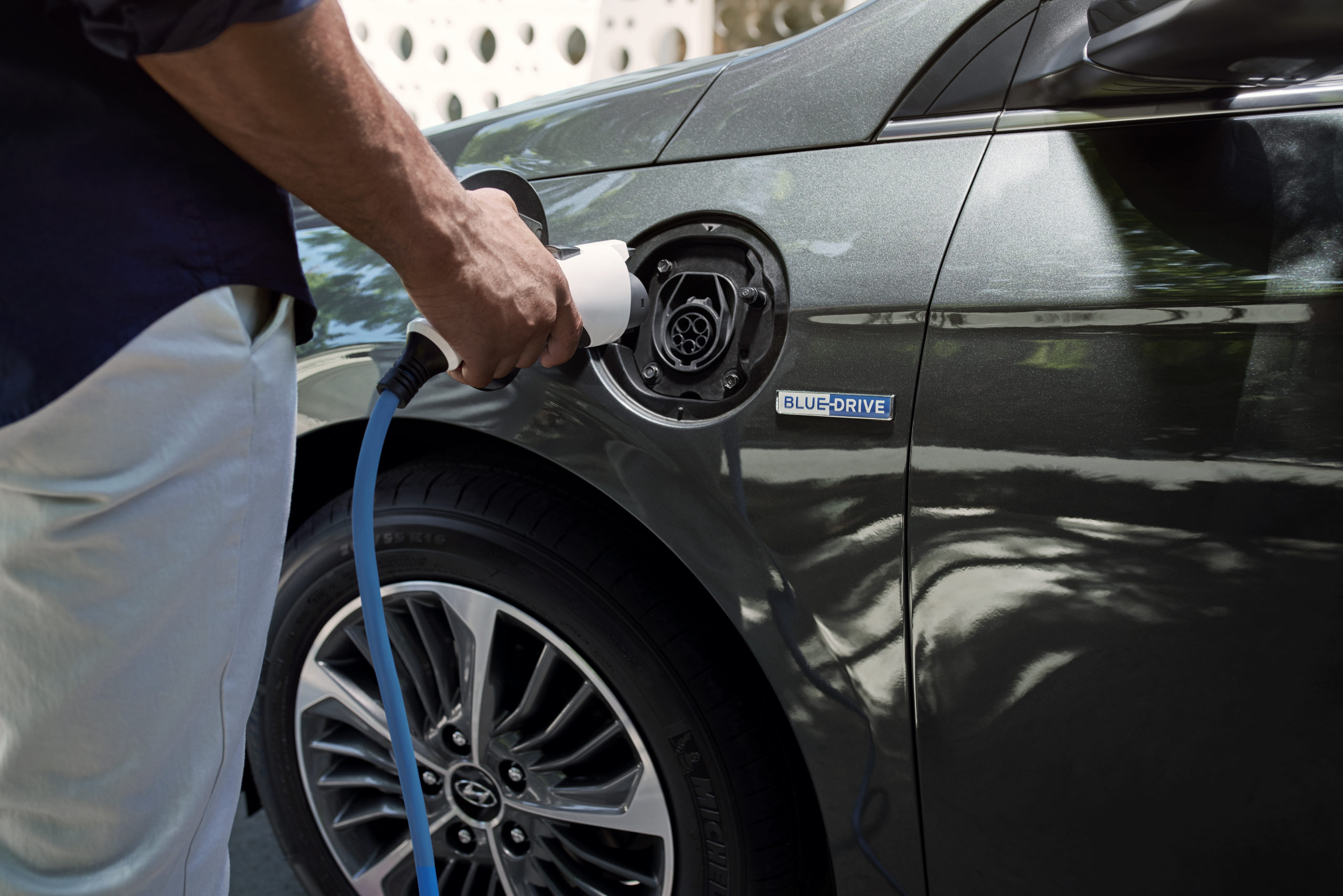 My plug-in hybrid test car was estimated by the EPA to achieve 52 mpg combined, which is less than the standard hybrid model’s estimated 59 mpg. Over my week with the vehicle, I calculated a return of around 48 mpg, but that number includes a heavy amount of in-town driving and even some transport of large, heavy items.

That’s a tremendous level of efficiency in the real world and added up to a driving range of well over 500 miles per tank. I always complain about the need for more power, but it’s hard to argue that point when the fuel efficiency is so darn solid.

Here in Maine, there’s little in the way of public EV charging infrastructure to test the recharge time, but Hyundai says a Level 2 charger can pump up the Ioniq PHEV’s battery in 2 hours and 15 minutes. 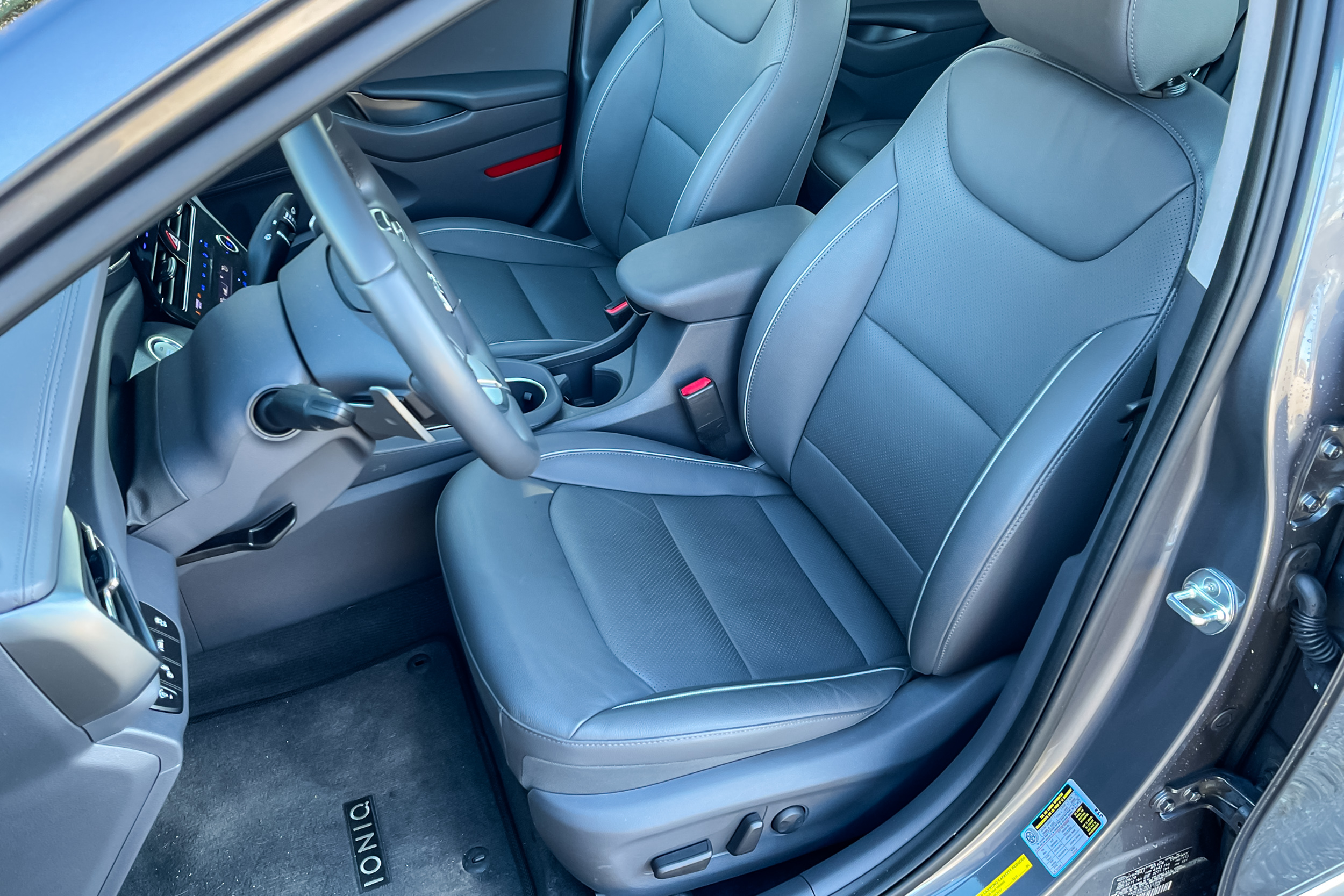 The Ioniq PHEV Limited that I tested came with leather upholstery, heated power-adjustable seats, and a memory system that moves the driver’s seatback for easier entry and exit. While being well-padded and more than deep enough for almost anyone, the Ioniq’s front seats could use more bolstering and hip support.

Over time, flat seating surfaces don’t foster the same levels of comfort that more supportive seats do. They also allow more body movement for the passengers in turns. That said, the 42.2 inches of legroom and 39.1 inches of headroom up front are more than enough for most people and can accommodate a wide range of driving positions. 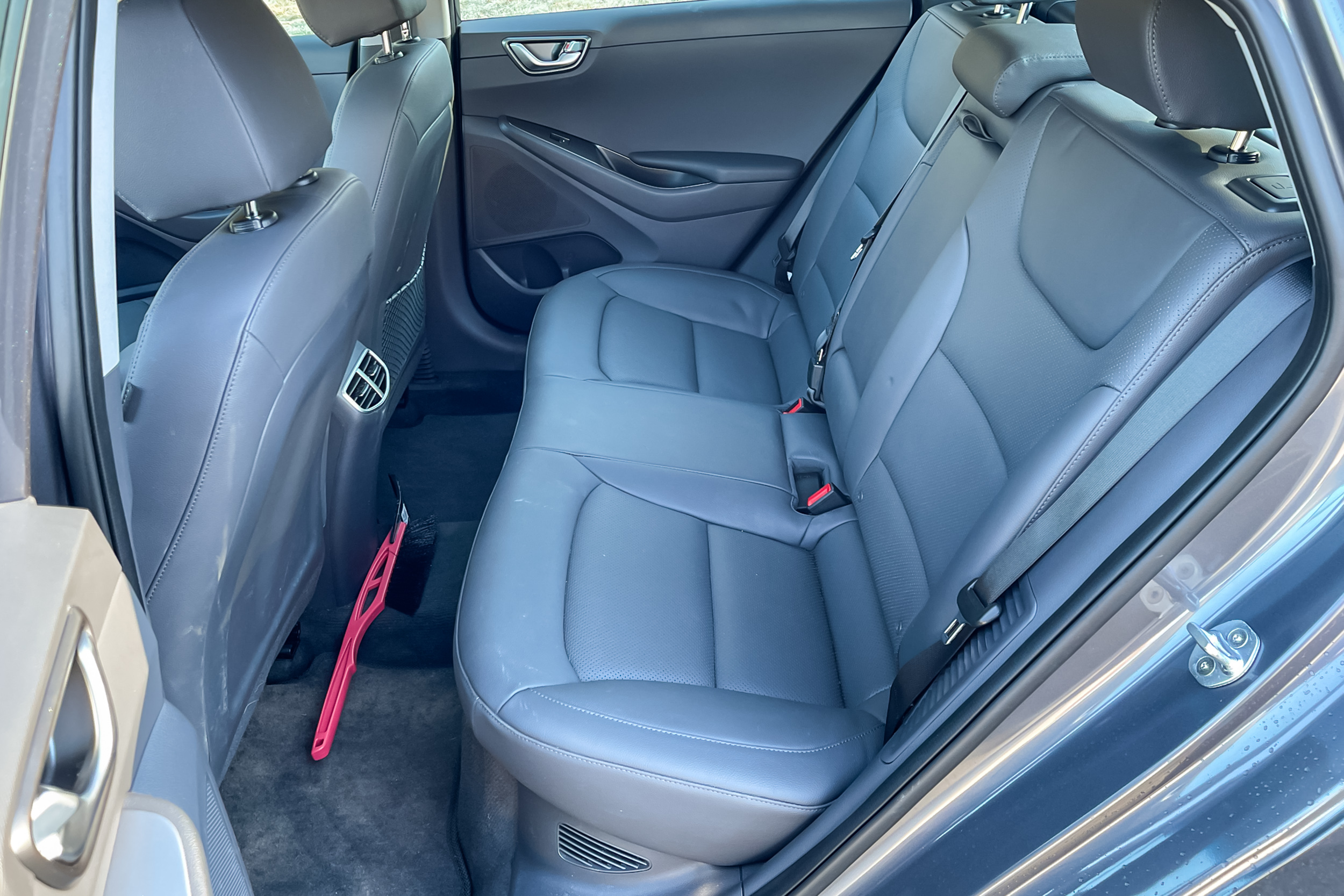 In back, the Hyundai offers a surprising amount of legroom that seems to defy its modest 35.7-inch measurement. Rear headroom checks in at 37.4 inches, which is plenty to accommodate kids in car seats without much hassle or bumped heads. The car’s hatchback shape means that its roof slopes gently to the rear, providing a decently comfortable ride for adults in the back as well. 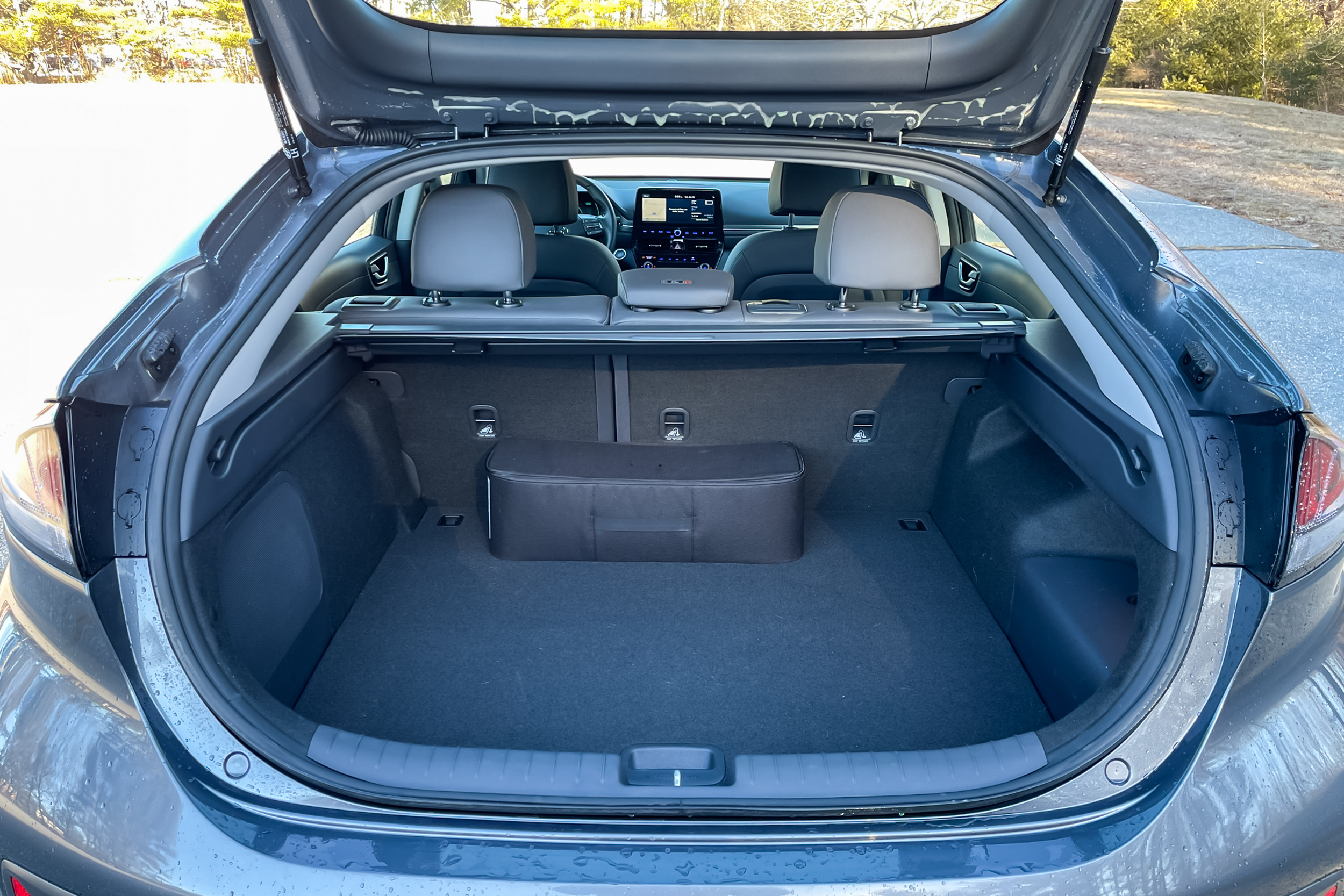 The big shocker is the sheer amount of real estate that the Ioniq boasts with its back seats folded down. My family is in the middle of a deliberately slow move, taking a few things each week to our new house. The Ioniq swallowed up a 50-inch television in the box while still allowing my dog and a couple of smaller boxes to make the ride as well. I don’t think anyone will buy the Ioniq thinking they’re getting a cargo van, but there’s way more space inside than might be expected. 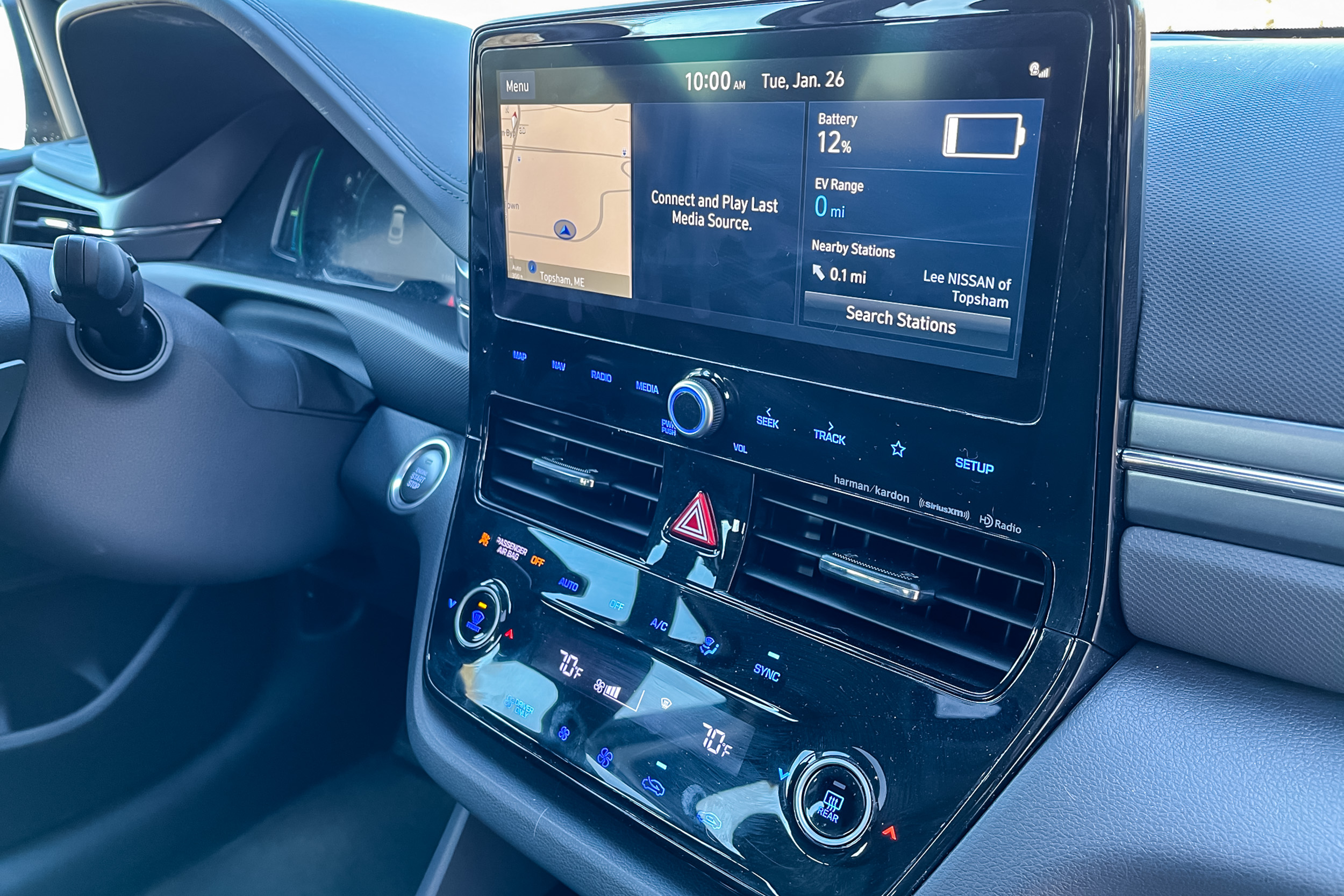 The SE and SEL trims get an 8-inch touchscreen infotainment system, and the range-topping Limited model comes with a 10.25-inch system. Android Auto and Apple CarPlay run on both, as does SiriusXM Radio. In the Limited trim, the standard speakers are replaced with an 8-speaker Harman Kardon system with a center channel and subwoofer.

Hyundai’s infotainment software is simple without any fancy animations, but it’s this straightforward setup that makes it a pleasure to use. On the large touchscreen, both the standard interface and Apple CarPlay run smoothly and without hiccups. Navigating to the required setting or function is easy, and operation is quick enough to keep distraction to a minimum.

The 2021 Hyundai Ioniq PHEV is Worth Consideration 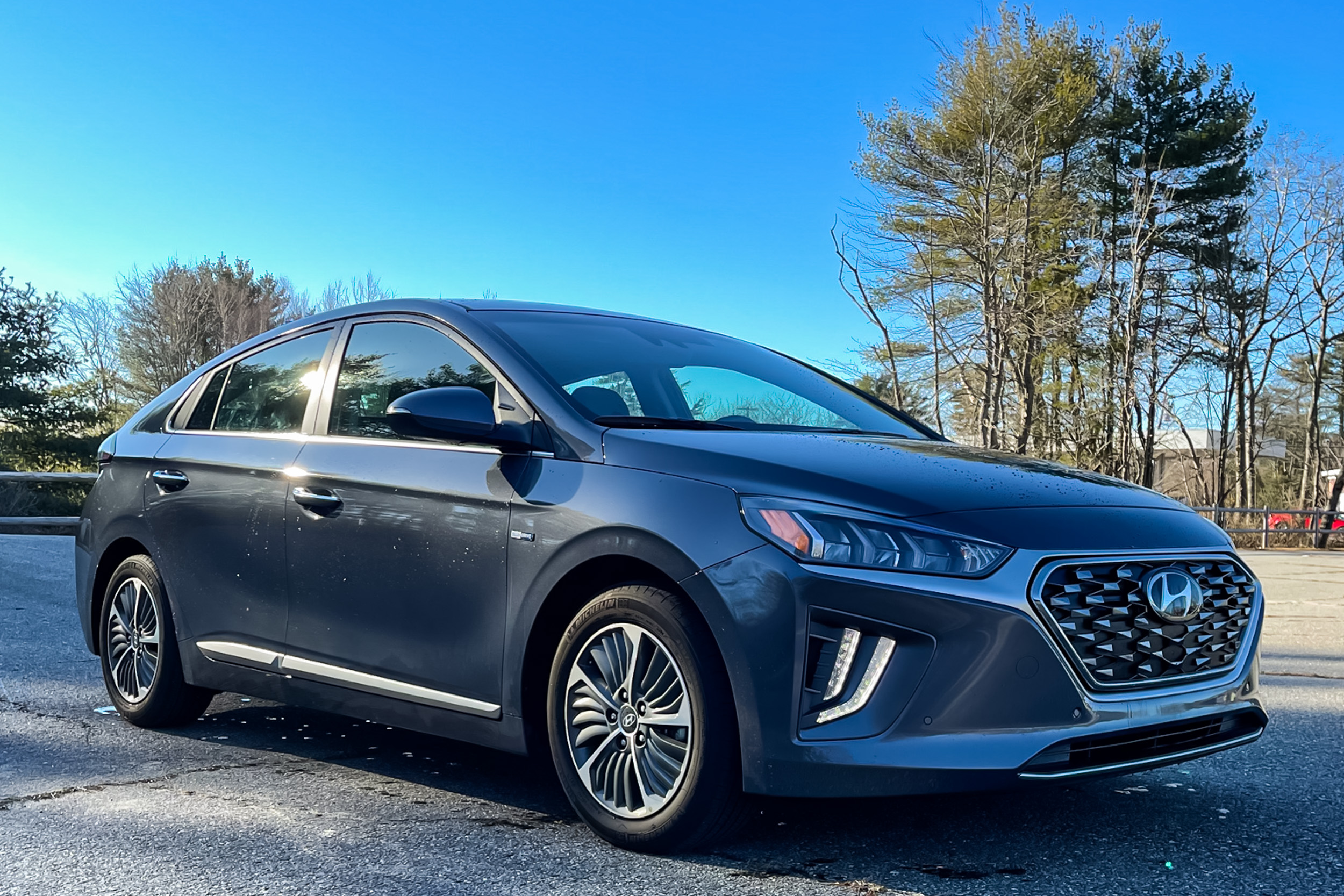 The 2021 Hyundai Ioniq Plug-In Hybrid SE trim starts at $26,500 before destination, taxes, or options. That’s $3,300 more than its Hybrid counterpart, but the PHEV is eligible for a tax credit of up to $4,543 and can travel up to 29 miles on battery power only, so there’s a reason to shop for the plug-in. The mid-range SEL trim starts at $29,500 and my Ioniq PHEV Limited had a starting price of $32,950. Those prices are before a $995 destination charge, but it’s worth noting that there are no expensive options packages or features to add on. What you see is what you get, and it’s all in addition to an excellent 10-year/100,000-mile warranty on hybrid components.

The number of hybrids, PHEV, and electric vehicles on the market is growing rapidly, so it’s not like the Ioniq is the only game in town. That said, it’s got one of the strongest value and packaging propositions in the industry, with a reasonable price, a long list of standard features, and a strong warranty to back it all up. On top of that, Hyundai was smart to build a normal-looking car that generally feels normal to drive with the added appeal of excellent fuel economy and a spacious interior.

There’s a new, very different, Ioniq on the horizon for 2022, but the 2021 Hyundai Ioniq PHEV is a great primer in the world of hybrid vehicles if you’re looking to make the switch. 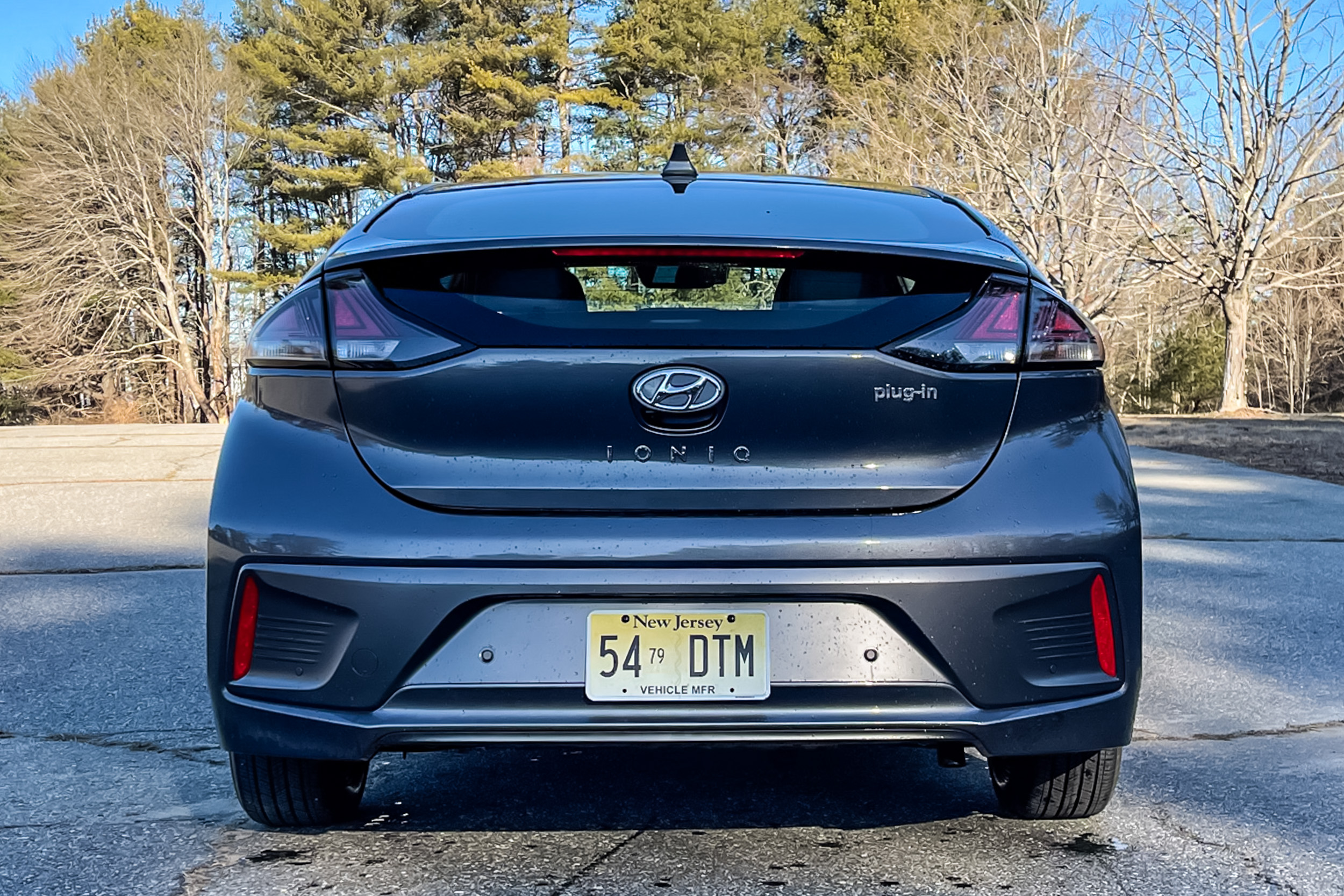 
2021 Jeep Grand Cherokee L Review: All Dressed Up With Every...
You Might Want To Stop Hating on The Minivan: 2022 Kia Carni...
2022 Genesis G70: A Powerful, Driver-Centric Package
The ARB ZERO Fridge is Ready For The Road Less Traveled
2022 Toyota Electric Vehicles: An Expanded Offering of Hybri...
Driven: 2021 Nissan Rogue SV [Review]