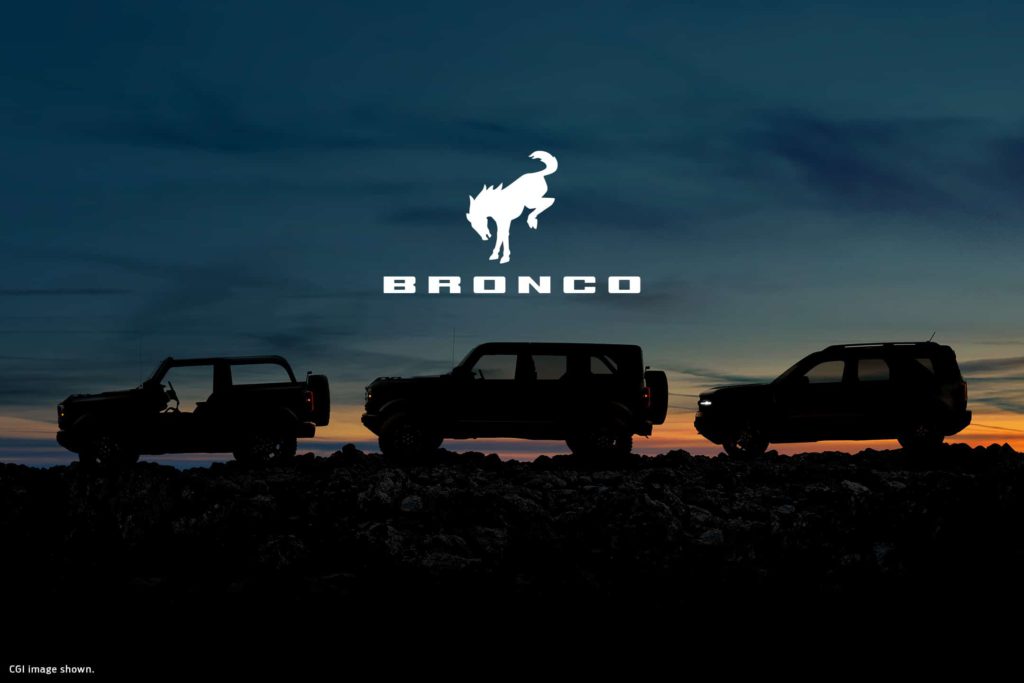 It’s officially official. The Ford Bronco is coming soon in three flavors; 2-door, 4-door, and Sport. Ford also announced that Bronco will actually be its own new brand within the Ford portfolio of vehicles.

Bronco will be much more than a new line of vehicles. Ford is aiming for it to be it’s own enthusiast brand. In order to do this  Ford has created; an off-road certification badge called “Built Wild,” an online enthusiast network called “Bronco Nation,” and even an off-road/adventure school for new Bronco owners called “Off-Rodeo.” There is zero doubt that the new Bronco lineup is directly aimed at taking market share from Jeep!

Jeep set the standards that the Bronco is chasing. Ford aims to position the Bronco vehicles directly toe-to-toe with Jeep vehicles. While we knew the new vehicles would be off-road oriented and probably have removable roofs and doors, we didn’t know they would have an off-road certification.

Jeep has it’s “Trail Rated” testing system that it uses to let customers know which of its products are truly off-road capable. Ford has followed suit with the new “Built Wild” testing system and badging. Just like with the Jeep Wrangler  Rubicon and Jeep Renegade Trailhawk, Ford will offer its new off-road badge on the top off-road spec Bronco and Bronco Sport.

Ford claims the new Bronco will have “class-leading levels of capability and suspension technology.” Those are bold claims when you consider what a Jeep Wrangler Rubicon can do off-road and the latest Fox shock technology being offered on Jeep vehicles like the Gladiator Mojave. 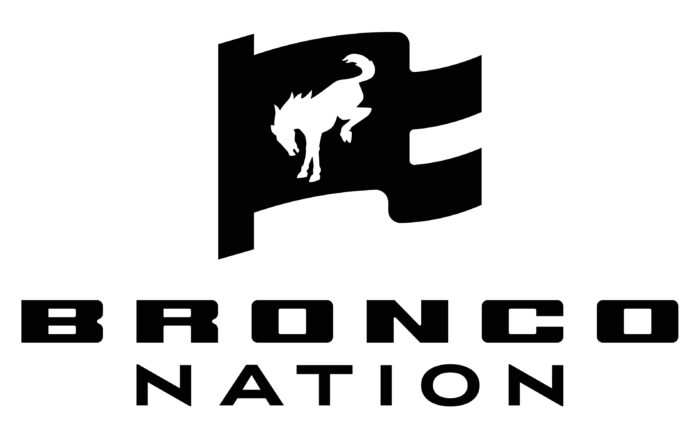 Ford knows that in order to catch Jeep they need to quickly build an enthusiastic community around the Bronco brand and vehicles, both new and legacy vehicles. The first major initiative on this front is the creation of Bronco Nation, “an independent online community that elevates the excitement of owning an all-new Bronco or Bronco Sport.” We’re not sure how “independent” this online community will be from Ford’s influence. But there will no doubt be many new independent online Bronco enthusiast groups, as there are many already.

Besides offering an online place to hang out and talk about Bronco, outdoor, off-road, and adventure, Ford is also going all-in on Bronco merchandise. Ford literally wants the Bronco logo on everyone. Check out all the cool Bronco stuff you can already get HERE. (BONUS: “A portion of Bronco merchandise proceeds will be donated to the Bronco brand’s stewardship efforts.”) 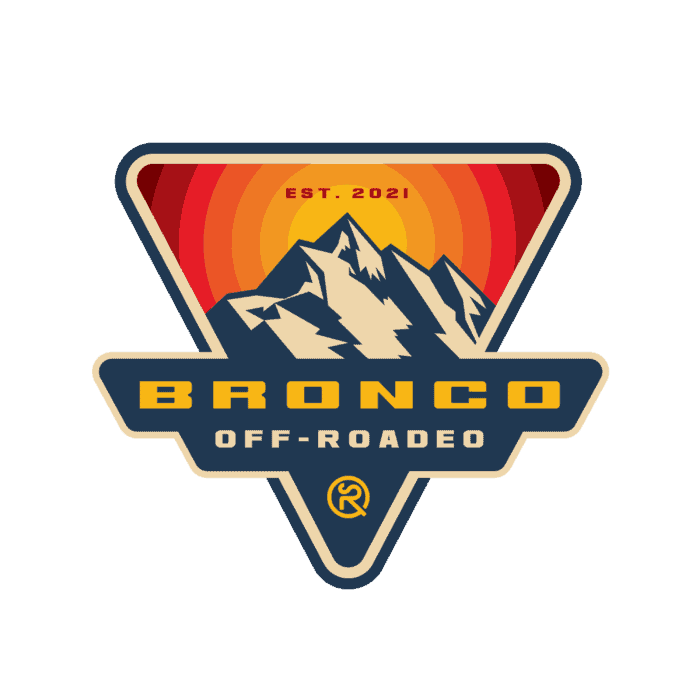 New Bronco owners will also get the chance to attend one of four different off-road adventure schools around the country. Ford call these schools “Off-Rodeos” and plans to provide an off-road driving focused outdoor adventure playground experience to new Bronco owners.

These Bronco Off-Rodeo experience centers are expected to open in early 2021. This is the same time we expect to see the first Broncos being delivered.

Besides all the hype, community, and schooling around the Bronco, Ford has also gone all in to perpetuate the Bronco’s off-road racing legacy.

Ford has committed to putting the Bronco front and center at the two largest off-road races in North America, King of  The Hammers and the Baja 1,000. The Bronco is now the Official Vehicle of King of the Hammers, ULTRA4 Series. It is also the official SUV of SCORE-International, the group that puts on such races as the Baja 1,000. 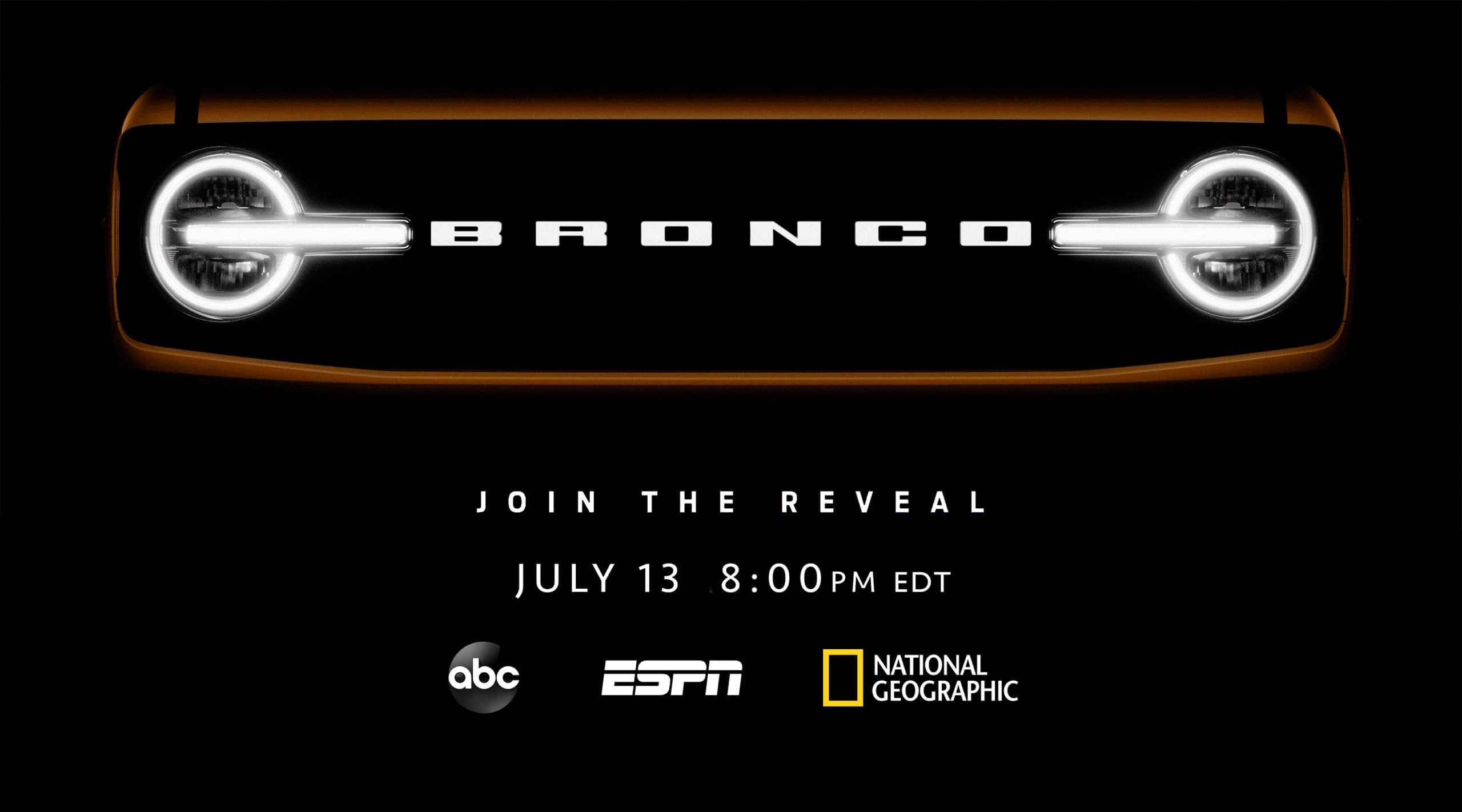 While we didn’t learn much about the actual Bronco vehicles today, we did learn a bit about the lifestyle that Ford is aiming for the Bronco to fulfill. The details about all three of the all-new Bronco vehicles will be revealed to everyone on July 13, 2020 at 8 p.m. EDT on channels National Geographic, ESPN, and ABC. At that time the Bronco reservation system will also open, allowing you to put down a $100 refundable deposit to get in line for your very own Bronco.