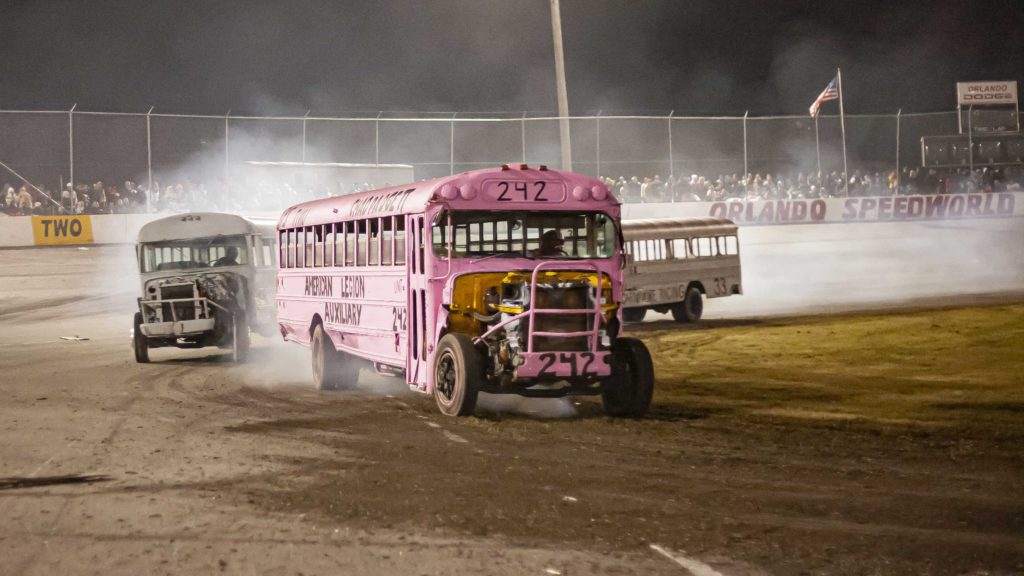 “All I wanna see is inside of my beer, and some carnage out there on the field,” says a young school bus racing fan interviewed in the documentary.

Speed World claims to have originated the ‘sport’ in the late 1990s. The story goes that a retired school district mechanic conceived the idea. School bus racing has since become a spectacle at obscure county fairs and faded local racetracks nationwide. 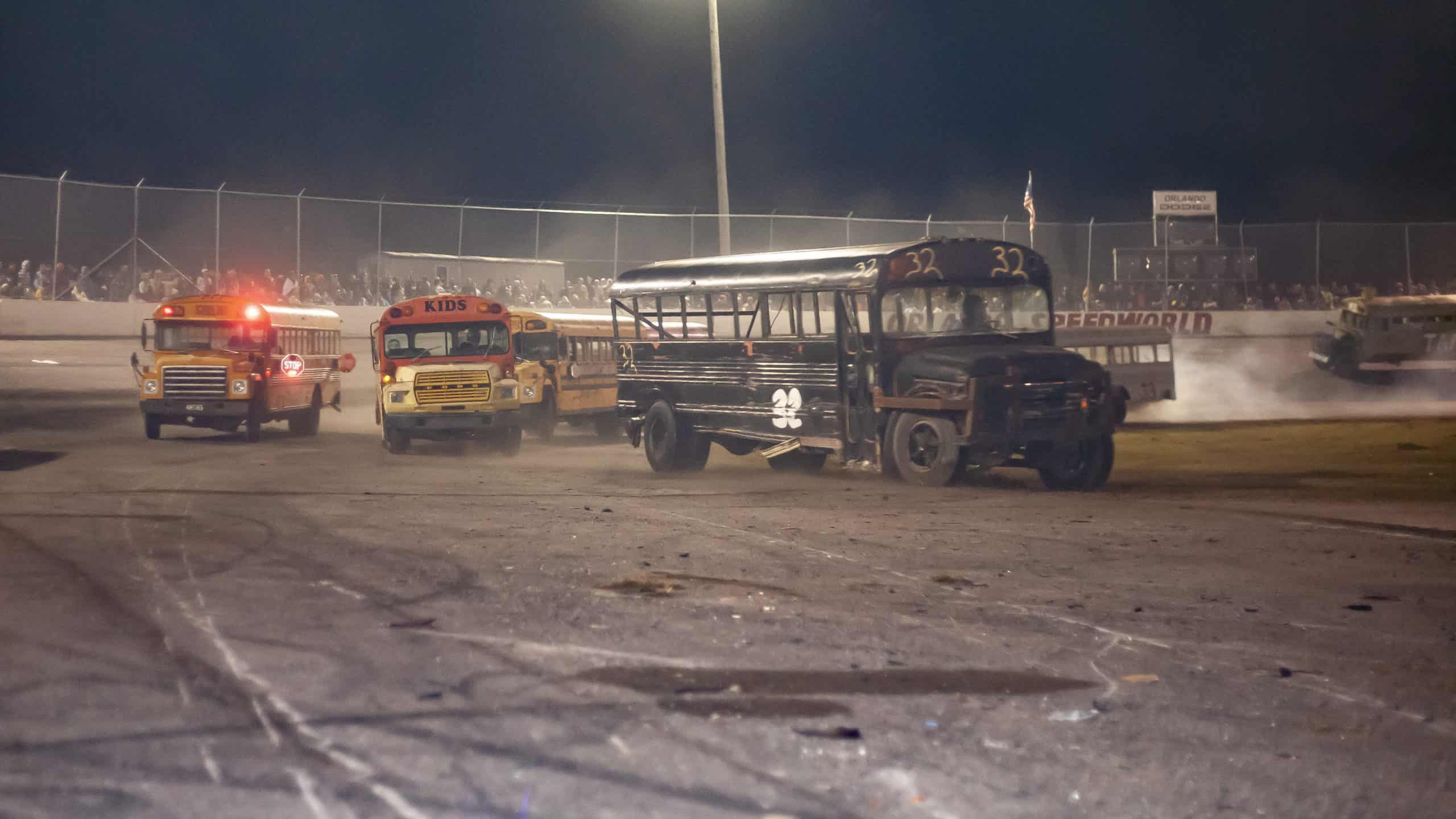 Technically, figure 8 school bus racing isn’t meant to be a demolition derby. They’re typically first-across-the-line 20-lap speed contests. But, as that requires crossing the ‘X’ in the track 40 times, the result is barely-controlled, ultra-destructive mayhem. Some venues even enhance the maelstrom with track-side pyrotechnics.

“It’s just absolute chaos, because I don’t even know how they follow the lead bus,” said Orlando-based Smash director Kevin Burroughs. “I think what happens is that people don’t care … They’re only watching the center of the racetrack as [the buses] come in. Because most of these drivers, if not all of them, are not cautious!” 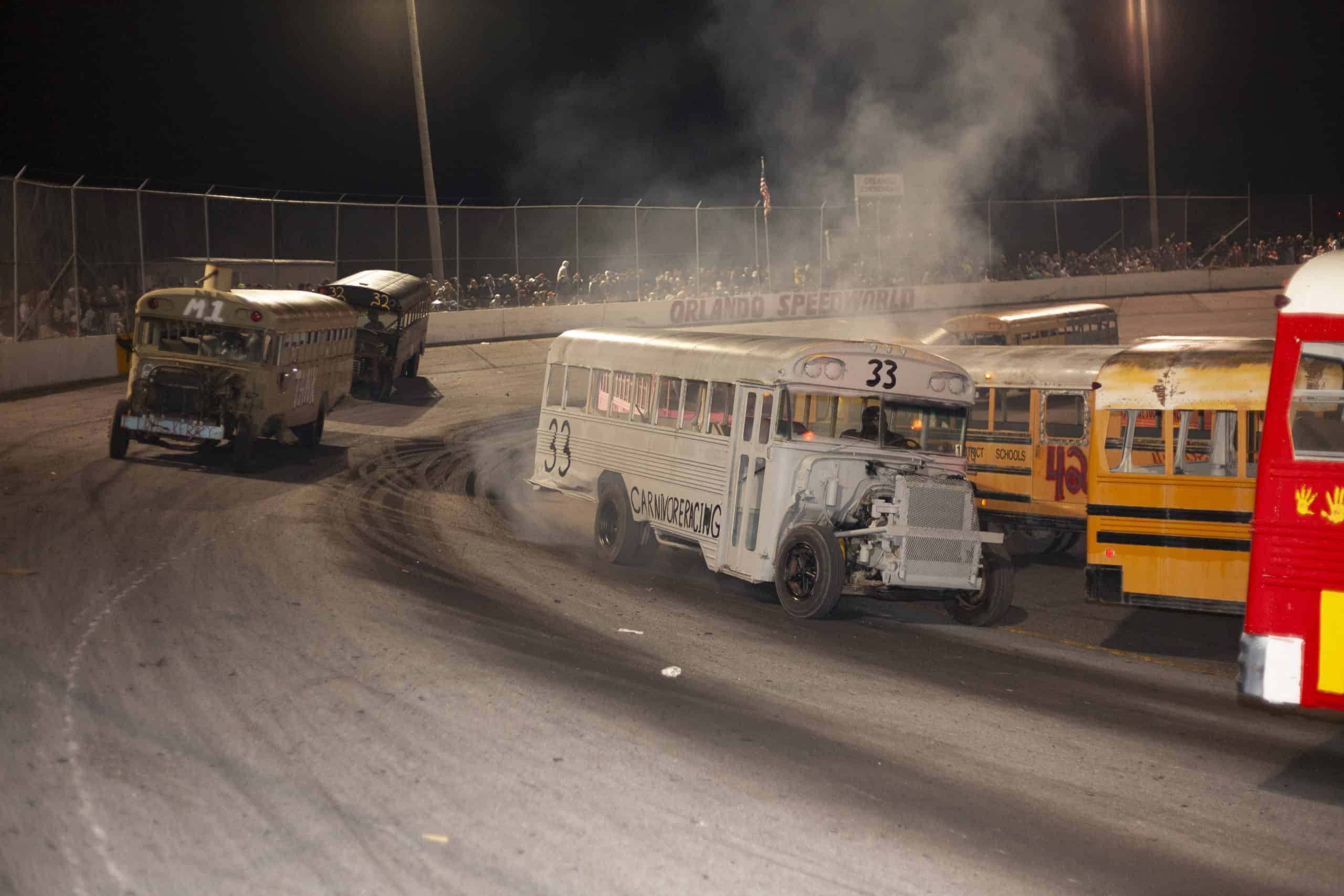 With around 20 vehicles competing in a race, each up to 40-feet long, it’s little surprise that around half the entrants will usually wreck out. Others simply overheat. Safety precautions extend only as far as drivers wearing helmets and seat belts. But it’s a testament to the reassuring sturdiness of school buses that serious injuries are rare. (Although a track worker was killed while helping to remove a damaged bus at an event in Wisconsin in May 2020.)

The novelty of school bus racing and other “silly races” – which include boat trailer races and camper trailer races – draws relatively big crowds to small tracks. So events like the biannual ‘Crash-a-Rama,’ which Burroughs documented, and the traveling ‘Tour of Destruction’ -which also features monster trucks and demolition derby- can be crucial to keeping these facilities afloat. 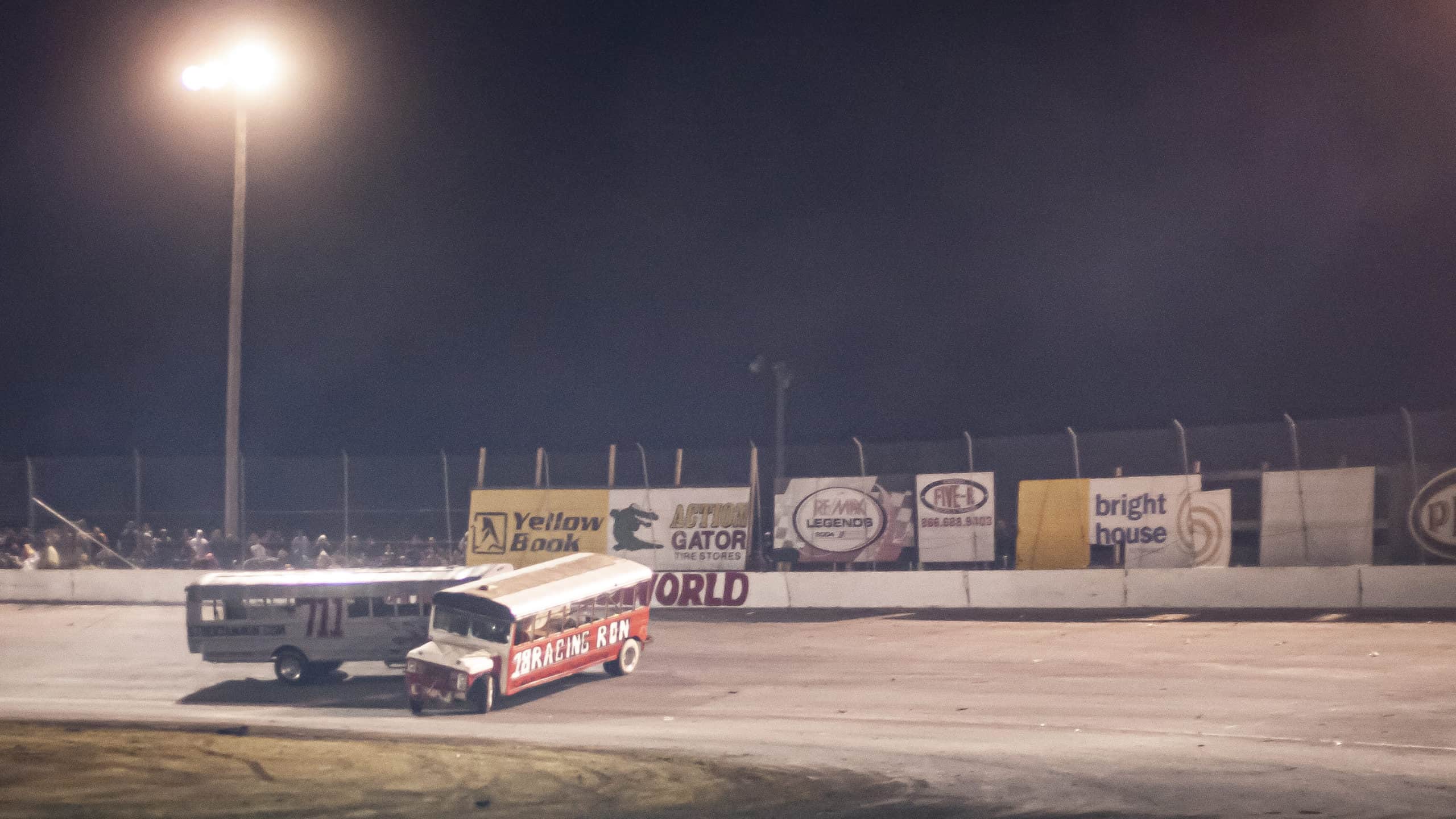 With racing and profits in mind, racetracks are usually happy to source out-of-commission school buses at auctions. They typically fetch $4,000-$6,000 apiece. These high-mileage vehicles generally date back to the ’80s and ‘90s, and are patched-up for reuse in multiple races. They’re usually driven by track regulars who are normally behind the wheel of cars in other events. According to Burroughs, some drivers really get into school bus racing, however, and obtain their own bus, or at least modify a track bus.

Most of the racing buses retain their distinctive yellow livery, albeit with the name of the school district blacked out. But some have been repainted in garish colors, and/or had slogans, team names, or web addresses added. Buses may be missing their hood, or have their rear emergency door swinging open. Many race with their yellow warning lights flashing. 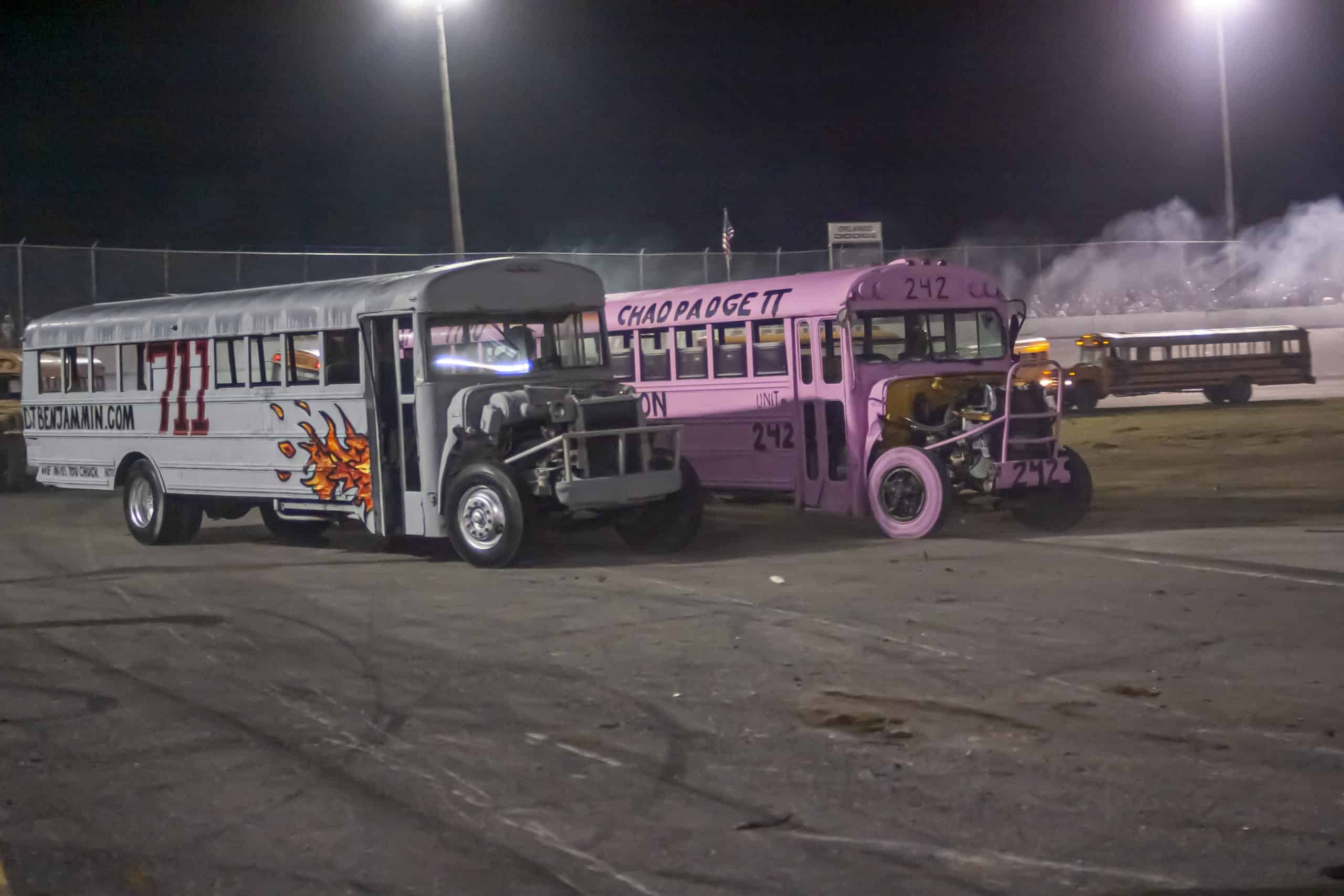 Fun For All Ages!

The emotional juxtaposition of vehicles that are ingrained into American culture as symbols of safety and childhood, careening around a congested track – and into one another – appears to lie at the heart of school bus racing’s allure.

“I mean, the school bus is just part of growing up,” said Burroughs, whose documentary is available on all major streaming services. “I definitely think that there is that feel of nostalgia; that here’s something from your childhood that … you never expected to be on a racetrack.”


10 Most Expensive Production Pickup Trucks
Best Racing Simulators to Satisfy Your Need for Speed
10 Best Italian Cars (And 10 Actually Powered by American V8...
10 Vehicles That Go From 0 - 60 In Under 2 Seconds
Ricky Bobby Strikes Back: Dodge, Sony Collab on Film's Anniv...
The 10 Fastest Cars Made in America