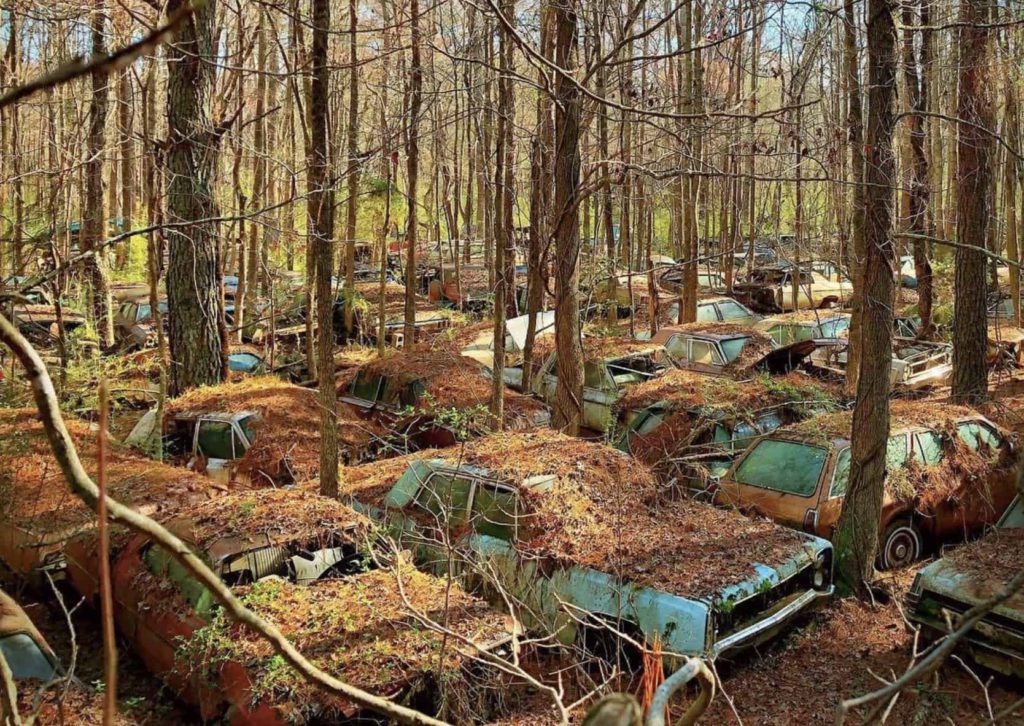 There’s so much more to junkyards than just cheap and hard-to-find used auto parts. With more than 12 million cars recycled in the U.S. every year, they’re also museums of our automotive past. Finding the best junkyards can be as hard sometimes as finding the rare parts you’re looking for. Not to worry though, as we’ve found some of the greatest junkyards in the country for you.

In specialized salvage yards dedicated to particular brands and eras you’ll find a rare sense of automotive community. Not only are the staff likely to be experts, but most of the customers will be hardcore enthusiasts, too.

“Pick your own” yards – where customers are allowed to bring tools and pull parts themselves – offer yet more camaraderie. Because wrestling reluctant parts from wrecks can take hours, and we’re all in the same boat at a “pick-a-part”: just trying to save a few bucks through our sweat and toil.

Junkyards tend to skulk in forsaken armpits of land on the edge of town. But that doesn’t diminish the thousands of tales that each has to tell. Because cars are emotional objects: they both witness and express so much that matters to us. Relationships begin and end in them; life is lustfully conceived and cut tragically short in them; success is shinily announced and shabbily betrayed by them. So rummaging through a wreckers’ yard is a reading of bones from a thousand
skeletonized stories.

And remember that salvage yards represent recycling at its best. Buying used parts from these businesses keeps more vehicles out of landfills, and means less environmental damage from the manufacturing of new parts.

Six of the Best Junkyards in America

If your image of a junkyard is a field full of rusting wrecks presided over by half-drunk hillbillies and barking dogs, you’re way out of date. Today’s top salvage yards are sophisticated operations with computerized inventories, slick websites, efficient delivery options, and up-to-the-minute environmental standards. Yet many maintain a down-home, hands-on charm that’s long since evaporated from so much of the auto industry.

We found six of the best junkyards in America. Now let’s dive in and see what makes these automotive meccas stand out from the crowd. 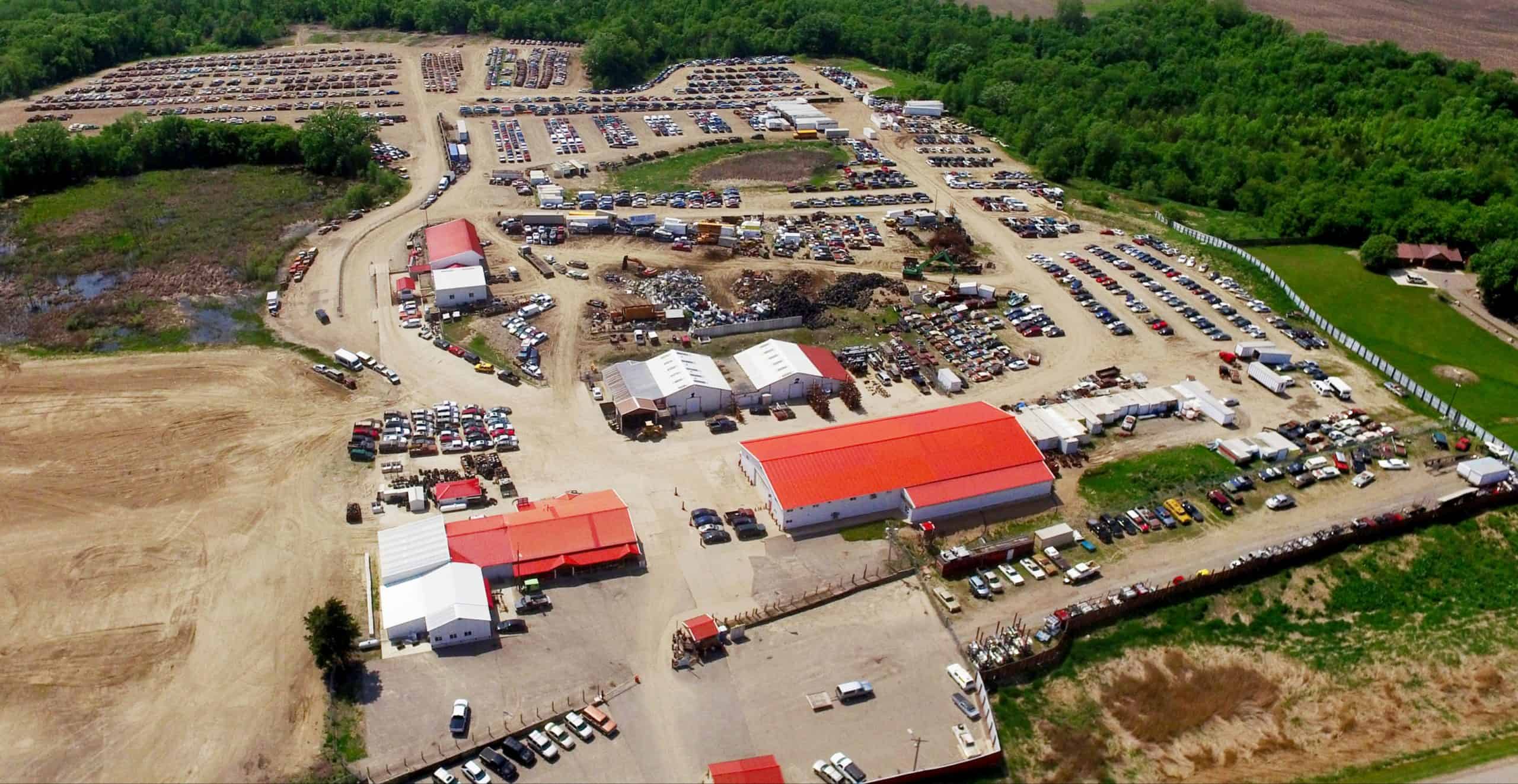 When French Lake Auto Parts was established back in 1956, Dwight Eisenhower was U.S. President and Congress had only just approved the construction of the interstate highway system. It’s odd to think that many of the retired vehicles in this yard were manufactured after it opened (though they also specialize in classics, all the way back to the 1920s). FLAP’s rich history even includes a dirt track on the site, dubbed French Lake Speed Bowl, from 1958 to 1960.

Covering 100 amazingly orderly acres some 60 miles west Minneapolis, FLAP was still operated by its founders, Floyd and Delores Nolan, until 2007. Like many junkyards, it’s a true family concern. When the couple retired, they passed the business on to their five sons, and it’s now owned and operated by their son and daughter-in-law, Skip and Kerry Nolan. But, defying his “retirement,” Floyd can still be found on the premises, helping clients locate rare and older parts. 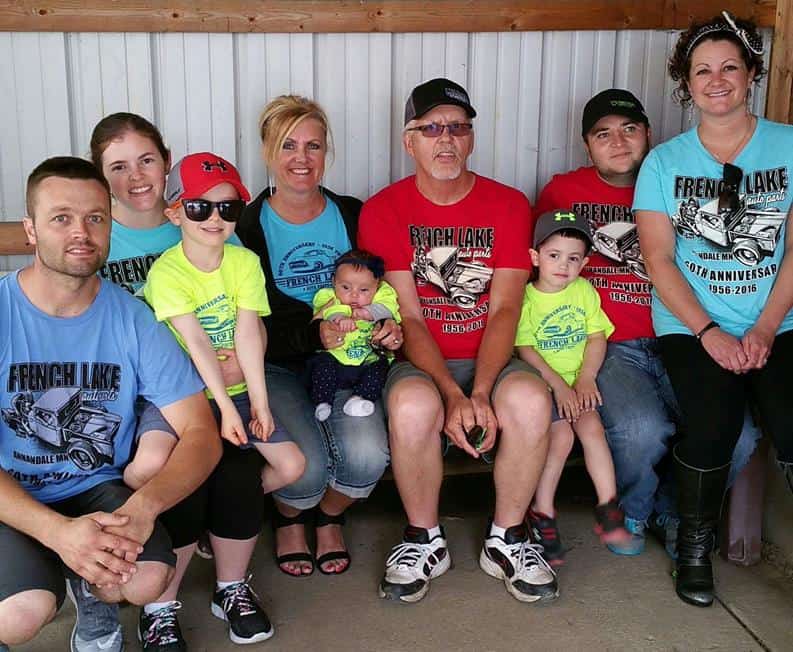 FLAP allows customers to walk the yard and pull parts themselves, or an employee can do so for you. Most components are available for immediate pickup, or they can be shipped worldwide. Parts searches are available on the yard’s website or eBay store, or with a call to French Lake’s knowledgeable sales staff.

It’s heartening to find an all-American family business still thriving like French Lake Auto Parts, which also offers scrap metal recycling and parts-only vehicles (some of which are listed on their site). 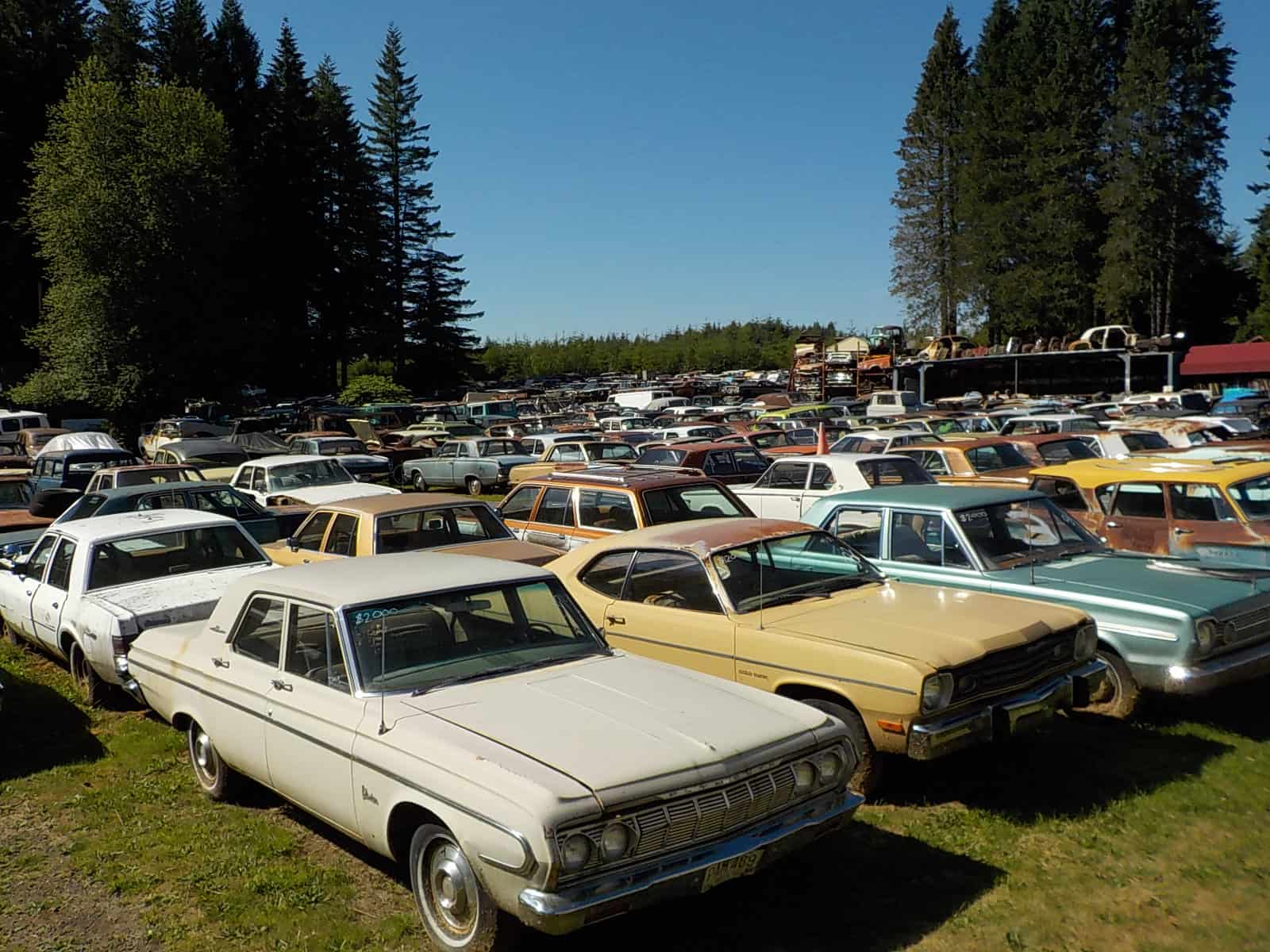 Junkyards can be bleak, sun-bleached places. But not so Wildcat Auto Wrecking. Situated outside of historic Sandy, Oregon (27 miles east of Portland), its neat rows of more than 800 classic Mopar cars and trucks sit on green grass, shaded by lush fir trees. 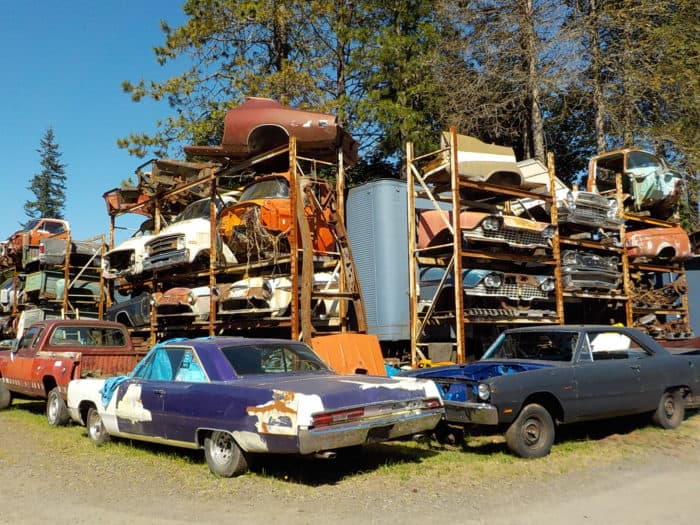 Wildcat is all about pre-1985 Chrysler, Dodge, Plymouth, and DeSoto vehicles (including complete project cars), reaching right back to the 1940s. This is the place for those elusive parts for your A, B, C, F, M, J, or E body, or even a van or truck. And they ship globally, including previously sending complete cars to customers in Saudi Arabia and South Africa, and a whole crate of parts to a vintage Mopar maniac in Pakistan.

Started by Ed and Phyllis Yost in 1989, Wildcat grew out of the couple’s genuine love for old Mopars. And it shows in the place’s locally-owned approachability and attention to detail. If Wildcat says they’ll call you back, they actually mean it and will. While it’s mostly an online business these days, walk-ins are welcome Tuesday-Saturday (by appointment only during the current pandemic, to ensure appropriate social distancing). 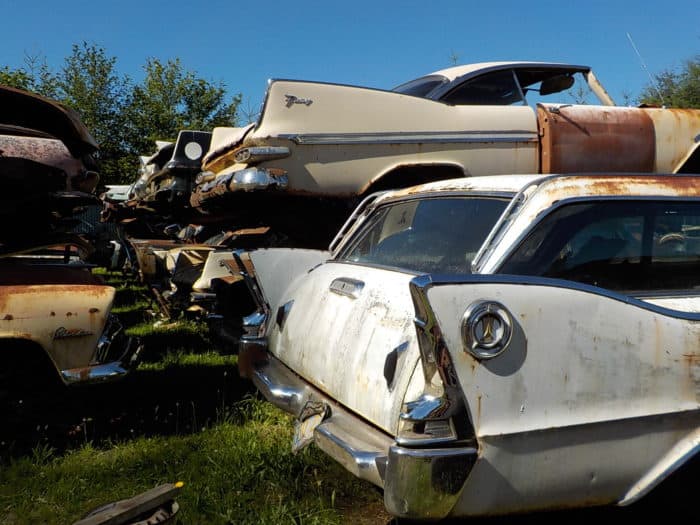 Wildcat is a near-legendary mecca for Mopar fanatics, with a second-to-none rep for specialized inventory and knowledge in that community worldwide. Yet its prices remain fair, and nothing seems to be too much trouble. Like all the best businesses, passion just oozes from the place.

Nationally-renowned Turner’s Auto Wrecking covers more than 70 acres near Fresno, in California’s Central Valley, with over 10,000 cars and an enormous parts warehouse. The place is bulging with husks and parts, mainstream and ultra-obscure, dating from the 1920s to the present day.

The land that Turner’s occupies was a ranch belonging to founder Jerry Turner’s father since the 1930s. The younger Turner began buying the property in 1960, gradually creating the legendary business it is today. In 2007, Turner tragically lost his own son – who’d worked side-by-side with him at the yard for 40 years – in an auto racing accident. Two years later, twin fires in the space of five weeks threatened the very existence of his business. Yet Jerry soldiered on. And what he built, and re-built, really is worth seeing.

When Hot Rod posted a gallery of photos from Turner’s in 2014, it became one of their most viewed pages ever. Which is testament to our fascination with wrecked cars and wrecking yards, whether or not we’re actually shopping for parts. Places like Turner’s resemble a barn find on an industrial scale (and where everything’s for sale).

Turner’s parts inventory is staggering. At any one time, they carry over 700 carburetors alone. And they also have complete classic, vintage, and antique cars and trucks suitable for restoration. Call them about your bucket-list model, because if anywhere has it, it’s Turner’s. 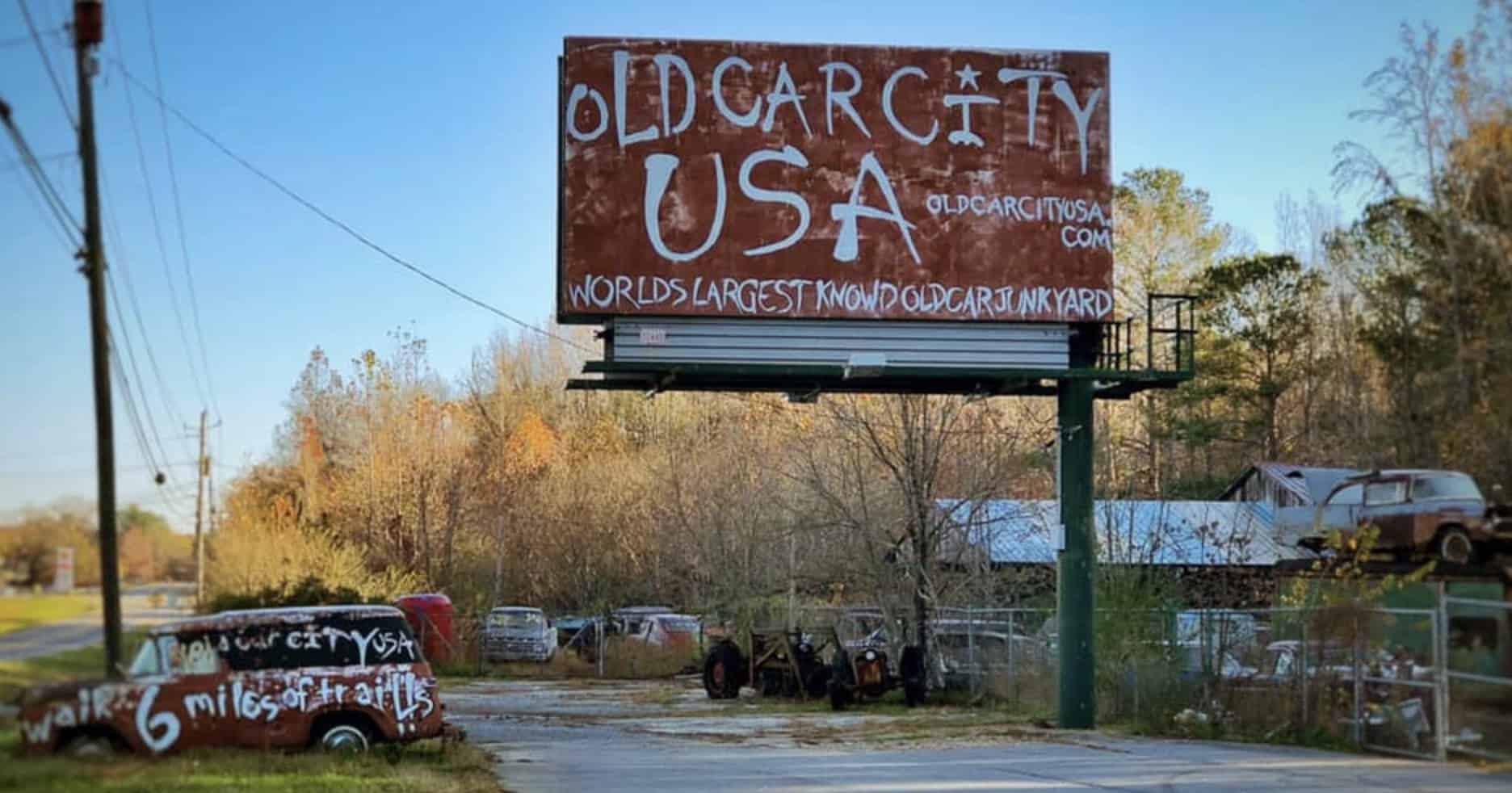 Founded in 1931, Old Car City comprises 4,000 American-made cars, trucks, vans, and even school buses from the early 20th century. All are gradually being consumed by the lush, deep-South vegetation that covers its 34 acres. The resulting “automobile art” is a ghostly yet photogenic juxtaposition of raw nature and man-made beauty that’s become a business unto itself. Old Car City’s self-styled “mayor” (aka owner Dean Lewis) charges $20 for “looking only” admission; $30 if you have a camera or are going to have your picture taken.

Among the treasures waiting to be discovered along Old Car City’s winding paths are the last car purchased by Elvis Presley, just a couple of months before his 1977 passing, and one used in a movie starring Johnny Cash and Andy Griffith. Many of the vehicles are perfectly placed to form evocative photos in themselves, or for kitschy backgrounds to professional portraits and social-media selfies. 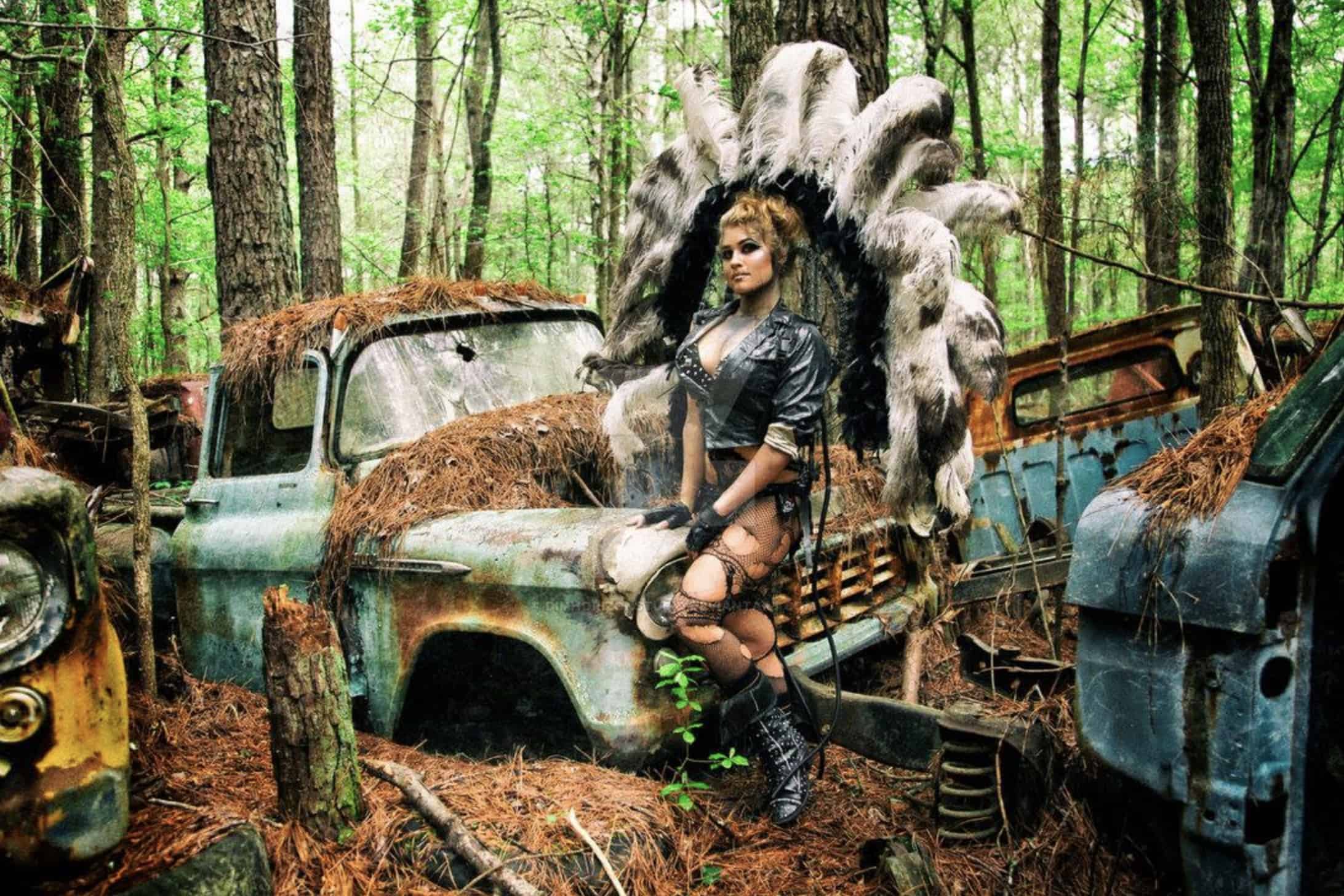 This literal forest of cars – including trees actually growing up and through old vehicles – attracts shutterbugs and just plain gawkers from all over the world. Some stay for days. Bring water, insect repellent, and suitable footwear to get lost in leafy miles of four-wheeled throwbacks. 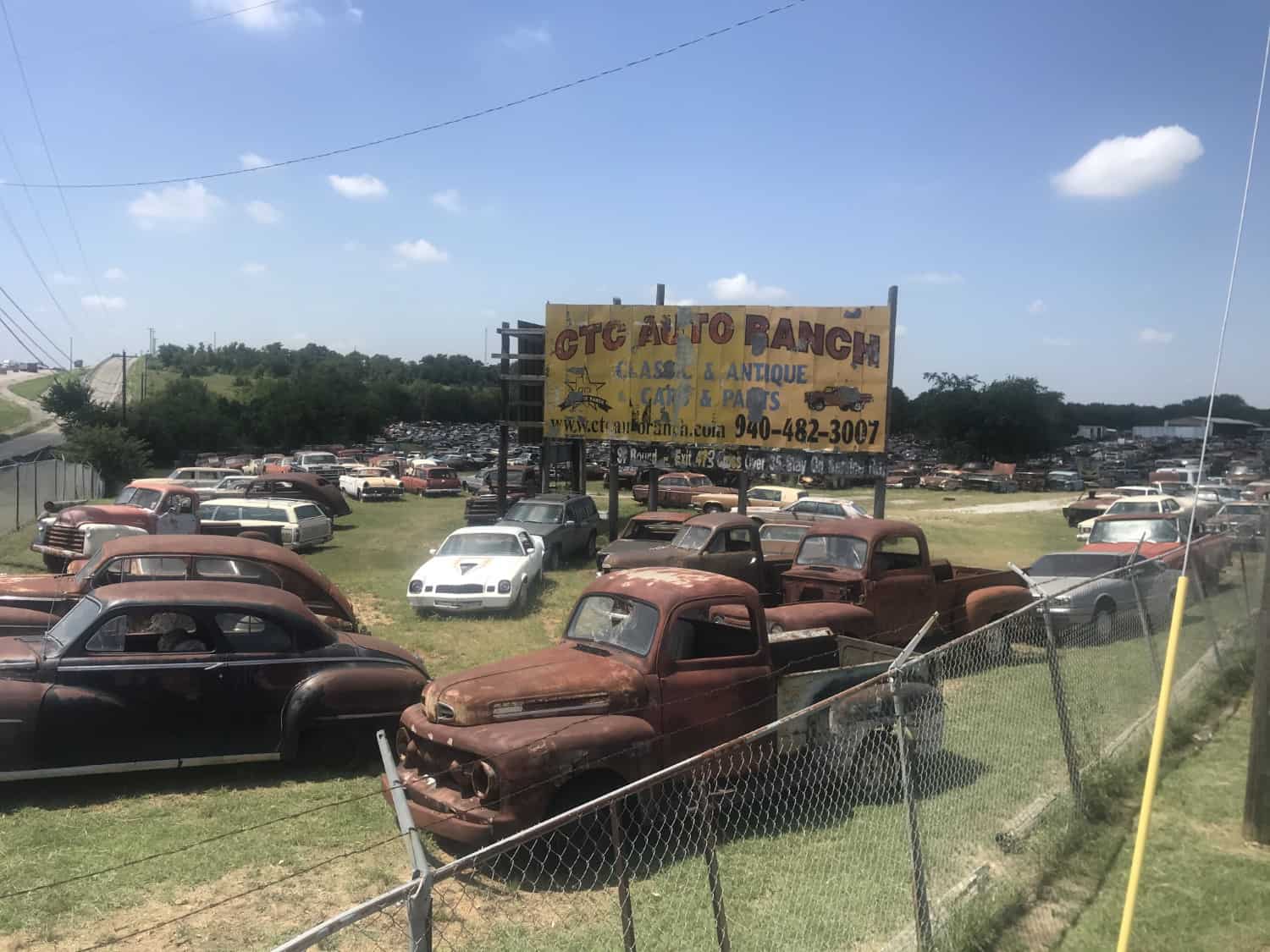 Denton is a college town north of Dallas with an artsy air. But it’s here that Allen and Dave Williamson founded CTC Auto Ranch with their father back in 1984. Dad has since retired, but the brothers still proudly run the place. CTCs, which only handles antique and classic cars, moved to its current location on (in all seriousness) Memory Lane in 1990. 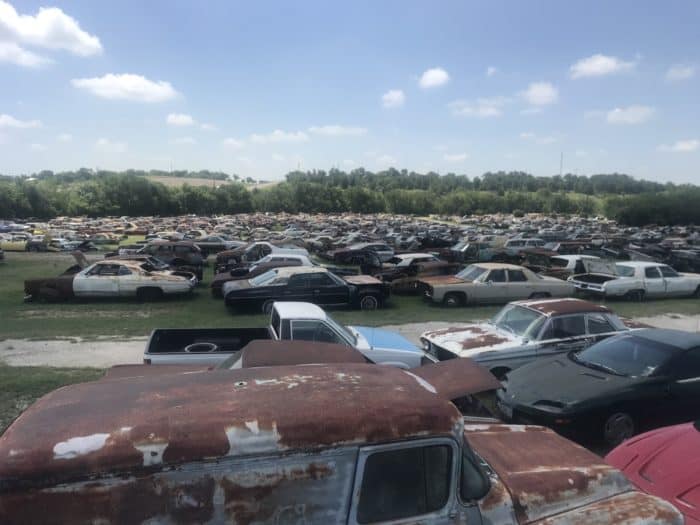 At any one time, CTC’s has around 4,000 neatly-arranged American cars from the 1930s-1970s, plus a handful of ‘80s models. They ship parts all over the world, and sell complete project cars, too. The Williamson brothers usually have around 300-400 complete American classics in restorable condition available for purchase. All are detailed on their website, including multiple photos and asking prices. 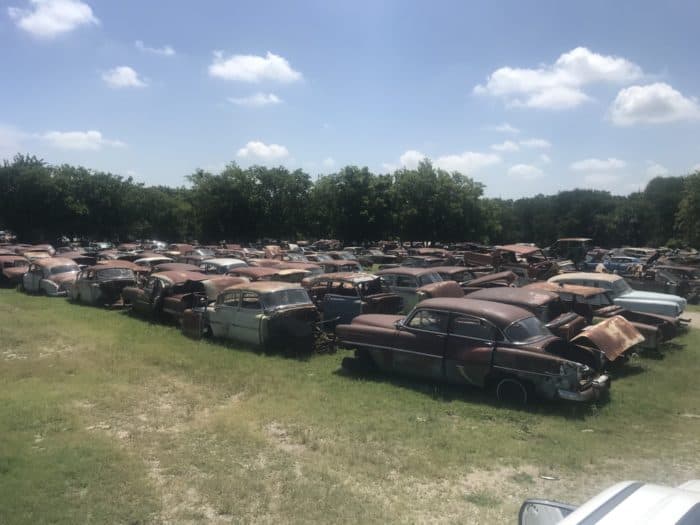 Due to issues with theft and liability, CTC’s no longer allows customers to walk their yard alone. But you can enter accompanied by a staff member to see a specific car or part that you’re seeking. They also carry a large stock of sheet metal – hoods, fenders, doors etc. – that they purchased years ago from another yard. Blemished reproduction parts are also available.

CTC Auto Ranch comprises 40 intriguing acres of mostly Detroit-built auto bygones, but note before heading out there that it’s only open Mon. – Fri. 9 a.m.-5 p.m., (not weekends). Look for the Love’s truck stop around four miles north of Denton on I-35, and exit right there. 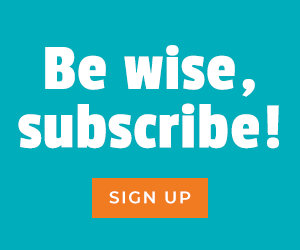 Corvair Ranch is another example of a junkyard that began as a hobby, in this case in the early 1970s, before becoming a business. Since 1986, it has flourished as not only a Chevrolet Corvair junkyard, but also as a comprehensive repair/restoration facility and machine shop.

As well as more than 600 Corvair cars, trucks, vans, and Ultra Van motorhomes, the property comprises six tractor-trailers laden with body panels, differentials, axles, and transmissions (Powerglide, three- and four-speed) for these rear-engined cult classics. Additionally, there are five buildings chock-full of yet more parts, plus office space and four service bays. Corvair Ranch rebuilds and even reproduces parts.

Yet Corvair-only service has always been the mainstay of owner Jeff Stonesifer’s business. This includes not only mechanical work (including full remanufacturing of engines), but also paint, upholstery, and complete vehicle rebuilds. He even helps to connect Corvair buyers and sellers.

Corvair Ranch is so confident of having any and all Corvair parts – used, “new old stock”, or reproduction – that it currently doesn’t even offer a catalog. Corvair connoisseurs can simply assume that the Ranch has what they need – or, if they don’t, that they can soon find it or make it.

This pillar of the Corvair community has a longstanding reputation for reasonable prices and expert yet friendly service. And it seems like everyone who gets their Corvair gets serviced here says it never ran better.


Jeff Lutz's Mad Max Street-Legal Camaro Sets the World Quart...
10 Best Pickups Not Available in the U.S.
1968 Chevrolet Camaro Catches Crowd's Eye at 2022 Barrett-Ja...
Hollywood Horsepower: The 13 Best Car Movies of All Time
10 Of The Most Outrageous, Rare Dubai Police Cars In The Fam...
Owners Keep These Cars for 10 Years or More