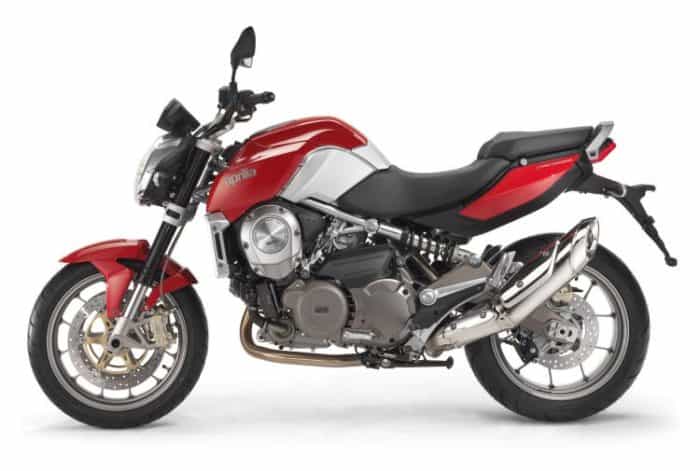 So you want to buy a bike that doesn’t have the complication of gears but doesn’t force you to sacrifice your man card? It looks like you’re going to need an automatic motorcycle. They’re aren’t mopeds, but they’re not manual clutch machines either. So what exactly is it? How do you ride them? Who makes them? And which ones are the best?

For the most part, most modern automatic bikes rely on a DCT system. Dual Clutch Transmission, or DCT, is a clever transmission system that uses two clutches. One clutch controls the even gears, while the other controls the odd gears. And it doesn’t require any clutch lever to be pulled, or any conventional manual gear shifting. It’s all controlled by onboard computers, leaving the rider free to concentrate on the ride.

Automatic Transmissions: How Do You Ride Them?

Motorcycles with automatic transmissions come in a variety of flavors but for the most part they are as simple to operate as you would imagine. Since power is delivered directly through an electric motor, all you have to do is twist the throttle and go. Thanks to the automatic transmission, there’s no need to work through gears or adjust gear to match the scenario, it’s as simple as “twist if you want to go faster.” There are certain nuances to riding motorcycles with automatic transmissions though. Firstly, your braking is going to be different. Some of these new bikes keep a conventional foot brake for the rear, but most have the rear brake on the handlebar where the clutch should be, just like a bicycle. And there’s engine braking; downward gear shifting on a conventional motorcycle allows for more controlled braking, which is lost with an automatic transmission. It’s a different ball game, but one worth playing. Or at the very least, one worth trying before you judge it too harshly.

Who would want one of these clutch-less machines? Well, there are a number of people who would infinitely prefer a less complex gateway into the motorcycling community. It’s great for beginners to get used to two wheels. Commuters who just need to get from A to B who are less concerned about executing perfect gear changes and more about getting to work on time are also prime customers. And then there’s the long-haul tour bracket: people who want to munch a lot of miles without the stress of shifting gears.

Now, automatic transmission DCT technology is not a new thing – and it has evolved into quite a cool system that allows riders to have a fully automatic experience, but with the possibility to manually change gears too, on some models. And you can opt for that choice – but the gear changing isn’t like it is on a fully manual motorcycle. It’s more like the paddle shifters you see on modern cars.

So, you’ve decided that automatic bikes are the way forward? Luckily, there are more options out there than you’d think. However, there’s still not a lot of variety. It’s going to come as no surprise that Honda has cornered this market almost completely, since “mobility for the masses” is almost their unspoken company motto…Anyway, without further ado, let’s look at some of the best automatic motorcycles on the market: 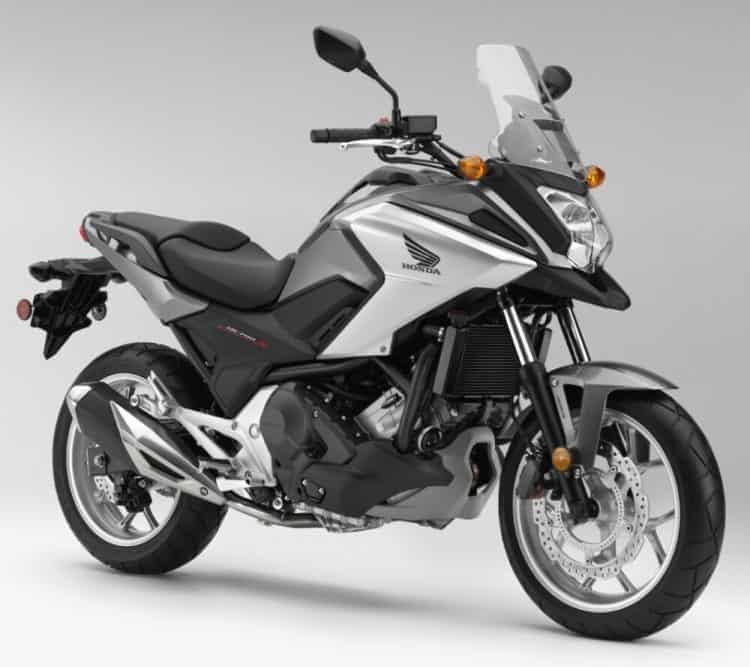 The Honda NC700X DCT may be an automatic motorcycle but it’s a very powerful machine that could compete in a drag race against the more conventional manual bikes in it’s class…and probably win. Boasting a liquid cool, two-cylinder 670cc engine that offers 51 horsepower and 45 lb – ft of torque.

For the dual clutch transmission DCT version, riders have the option of going fully automatic or being able to control the gears via an upshift and downshift button mounted on the handlebars. It also comes with a variety of riding modes, including Neutral, Drive, and Sport modes and a rather fantastic Combined Anti-Lock Braking System (C-ABS) as standard equipment, to keep you upright at all times too.

Overall, the bike is agile, stable, has a low center of gravity, and comes with enough mod-cons to keep things interesting. As far as learner bikes go, it’s probably not a bad choice considering that once you’ve mastered the automatic version, you’ll be familiar with the fully manual version which has the same layout save for a clutch and gear shifter. New prices start from $8,099 USD. 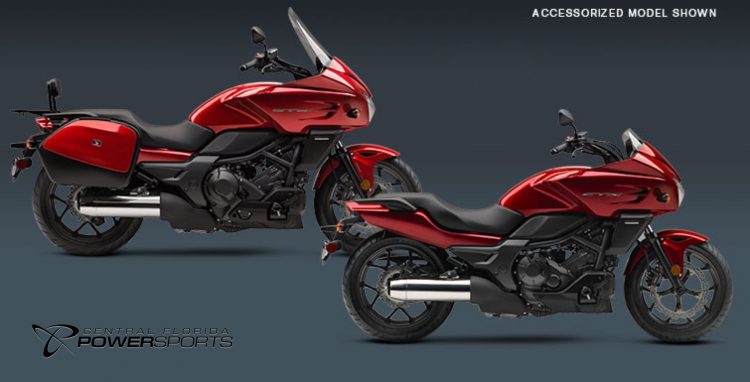 Up next, we’ve got Honda’s more tourer shaped automatic model: the CTX700. Before we continue, it’s worth mentioning that this very same motorcycle is available without the touring-style fairings. However, this one adds more variety to the list, so we’re picturing that instead. It’s probably the most relaxed tourer on the market, offering a fully automatic ride with all the comforts that you’d expect from a Honda-built touring machine. In fact it’s even called the CTX for that exact reason. We have the “C” for “Comfort,” the “T” for “Technology,” and the “X” for “eXperience.” Here’s what it’s designer, Masanori Aoki, had to say about it: 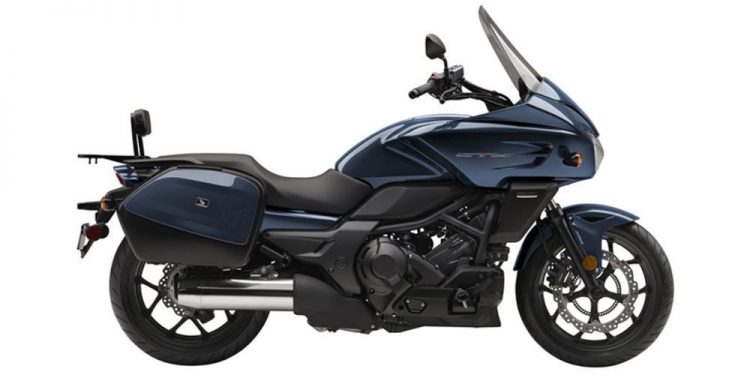 “The CTX700’s twin-cylinder engine, with its low center of gravity, delivers a high quality, easy-to-handle ride with an emphasis on low to medium speed torque. The bike combines ease of use with freedom of design, and because it sports our lightweight and compact Dual Clutch Transmission, it delivers a ride that is fun, comfortable and exhilarating – just what CTX700N is all about. Looking forward to a new era, we have taken up the challenge of developing bikes for the CTX Concept Series, bikes that will share the following distinctive characteristics: honest handling and feel, controllable performance and a powerful, horizontal design.”

Performance wise, it’s exactly the same as the NC700X, but it offers a smoother and more comfortable ride experience. You can buy one of these for $8,299 USD and up. 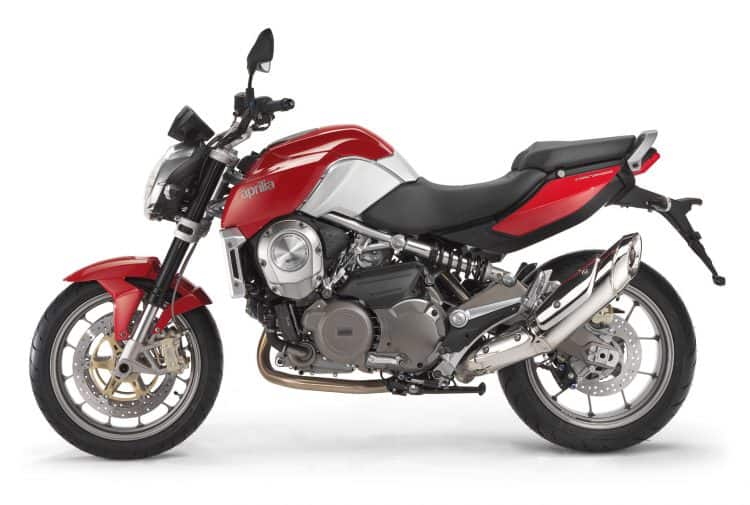 For the sake of breaking up the Honda show, we’ve got an Aprilia for you. The Aprilia Mana doesn’t rely on a regular dual clutch transmission system. It uses Continuously Variable Transmission (CVT) instead. You can Google the difference yourself, because it’s a big deal (apparently). Basically, the cool thing about this Aprilia is the fact that it is an automatic motorcycle with a proper manual setting attached. In essence, it’s an 839cc streetbike that you can simply “twist and go” on – but if you feel like it, you can clunk through the gears through its manual gearbox by upshifting or downshifting the gear lever, or by pushing the paddles on the handlebars.

Overall, it’s a great package for those who want to push themselves a little but don’t want the hassle of gears…but are open to the idea. You can pick up an Aprilia Mana 850 for somewhere around the $11,199 marker. 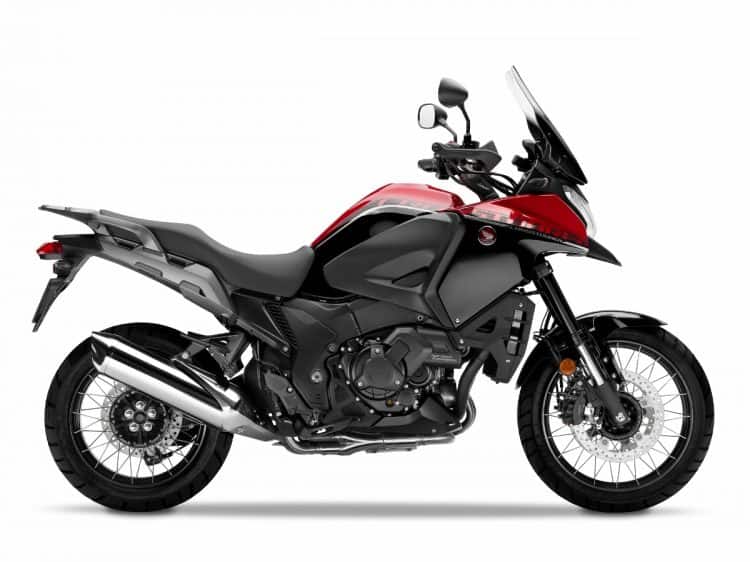 And then there was the Honda VFR1200 series. While the VFR1200F is also available with DCT, we’re going to look at the VFR1200X DCT, or CrossTourer as it’s sometimes known. This is a touring bike for a different kind of adventurer. At home in the dirt as well as on road, we’re looking at one of the most versatile automatic motorcycles on the market. If adventure sport touring looks appealing to you, but you don’t want to use a clutch then this is the machine for you.

The CrossTourer is powered by a 1237cc V4engine that’s capable of pumping out 127 hp at 7,750 rpm and 93 lb-ft of torque at 6,500rpm. It’s not built for mega performance (although it will surprise you), but it is designed to be the right tool for a wide range of jobs. For many people, it might not have the “wow factor” on first glance, but when you take a closer look at the VFR1200X’s advanced chassis, or note the features in its electronics package (combined ABS and Traction Control, selectable torque control, adjustable ergonomics, etc) it’s definitely well worth a test ride. 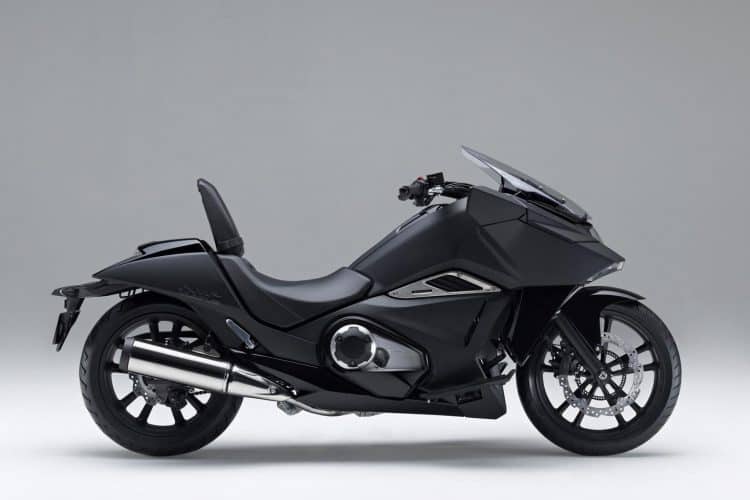 The Honda NM4 Vultus is kind of an unclassifiable anomaly. It’s not a conventional motorcycle by the design or shape, but it would be unfair to simply dismiss it as a maxi-scooter too. I mean, if you’re thinking of iconic motorcycles from the movies, you’d probably find the Akira bike somewhere near the top of the list – and that’s pretty much what this is. Apart from the fact that this is a real thing, and not just a drawing. It’s forward-thinking, futuristic, and a design marvel. And it’s automatic, too.

Unlike a lot of automatic scooters, this isn’t a little 125cc job. Underneath the futuristic exterior, the NM4 Vultus is powered by a powerful liquid-cooled, 670cc, parallel twin motor that produces around 46.9 hp at 6,250 rpm, and 44 lb -ft of torque at 4,750 rpm. It’s not a bad deal, especially when combined the Dual Clutch Transmission, the intelligent ABS system. But there’s more to this automatic motorcycle than the engine and transmission…its also a very practical and comfortable ride too.

Sitting low to the ground – a mere 25.6 inches, in fact – the rider can sit on a nice and comfy seat with an optional backrest that can be raised or lowered to accommodate a passenger, with three variable positions in between. On top of that, the NM4 Vultus also comes with loads of storage space for ultimate practicality, integrated LED lights, and an illuminated display.

Despite all these options, there is a whole other segment worth investigating in the automatic bikes

What About An Electric Automatic Motorcycle?

If you’re determined to give an automatic motorcycle ago, then why not buck the trend and swap gasoline for batteries, and give in to the green revolution? 90% of all electric bikes are actually automatic motorcycles. Since their electric motors can deliver power directly to the wheel without having to go through a gearbox, you’re looking at seamless power delivery in a fully automatic sense. 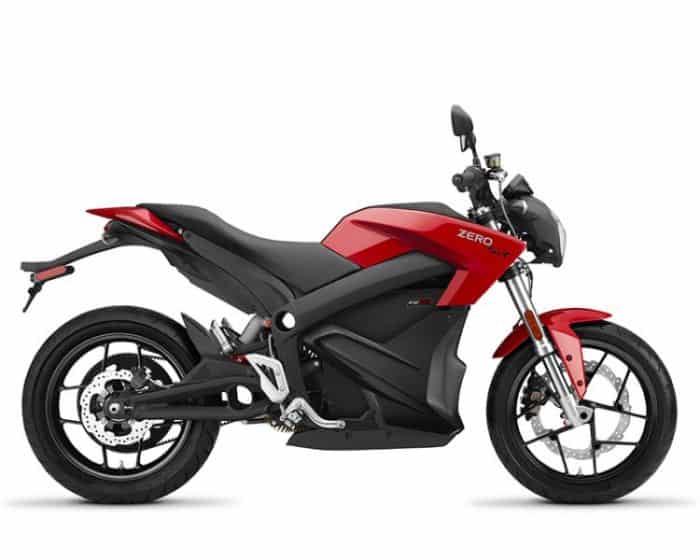 If you’re looking for something a little less aggressive that still looks and feels like a conventional motorcycle then the Zero SR is a nice choice. It’s not going to win prizes for performance, but it’s definitely a cheaper option that the aforementioned Energica offering. It has a smaller price tag, but it doesn’t make too many compromises in terms of its abilities.

In terms of vital statistics, the Zero SR has a peak power figure of around 70 hp. It boasts 116 lb – ft of torque. The top speed has been clocked at the 102 mph marker. It can do 0 – 60 mph in 3.3 seconds. As for the range, it also promises a much nicer 122 miles per charge, depending on how much you’re giving it though. If you need to charge it, you can fill the battery up in about three hours depending on the quality of your charger. With that in mind, it’s actually a very practical bike that you could ride every day. It’s going to be economical, it’s going to be a blast to ride, and of course, it’s automatic. Not bad for a package that sells for between $15,995 – $18,669 USD.

So there you have it: a quick overview of what automatic motorcycles are currently out there. There’s more than you thought, right?