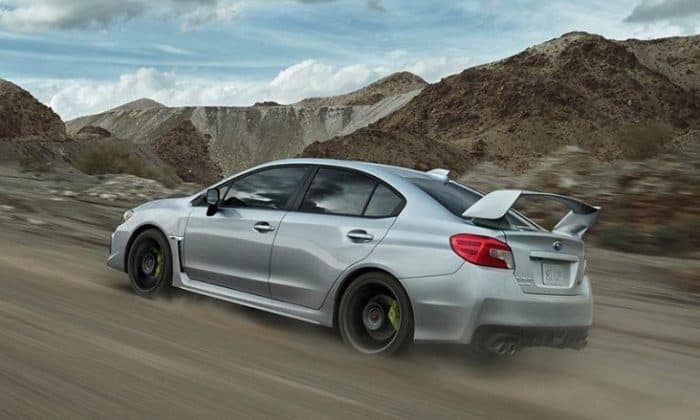 Japanese automakers are known to be the most consumer friendly and popular companies across the globe. As for Subaru, the company only sells seven crossover and car models, which account for less than 3% of total US auto sales. Even Toyota Camry outsells the car manufacturer’s entire lineup. However, Subaru maintains a strong regional brand in the Northwest and Northeast. Kia and Hyundai emerged only two decades after Subaru started selling cars, but both have already sold more vehicles and broader product lines. 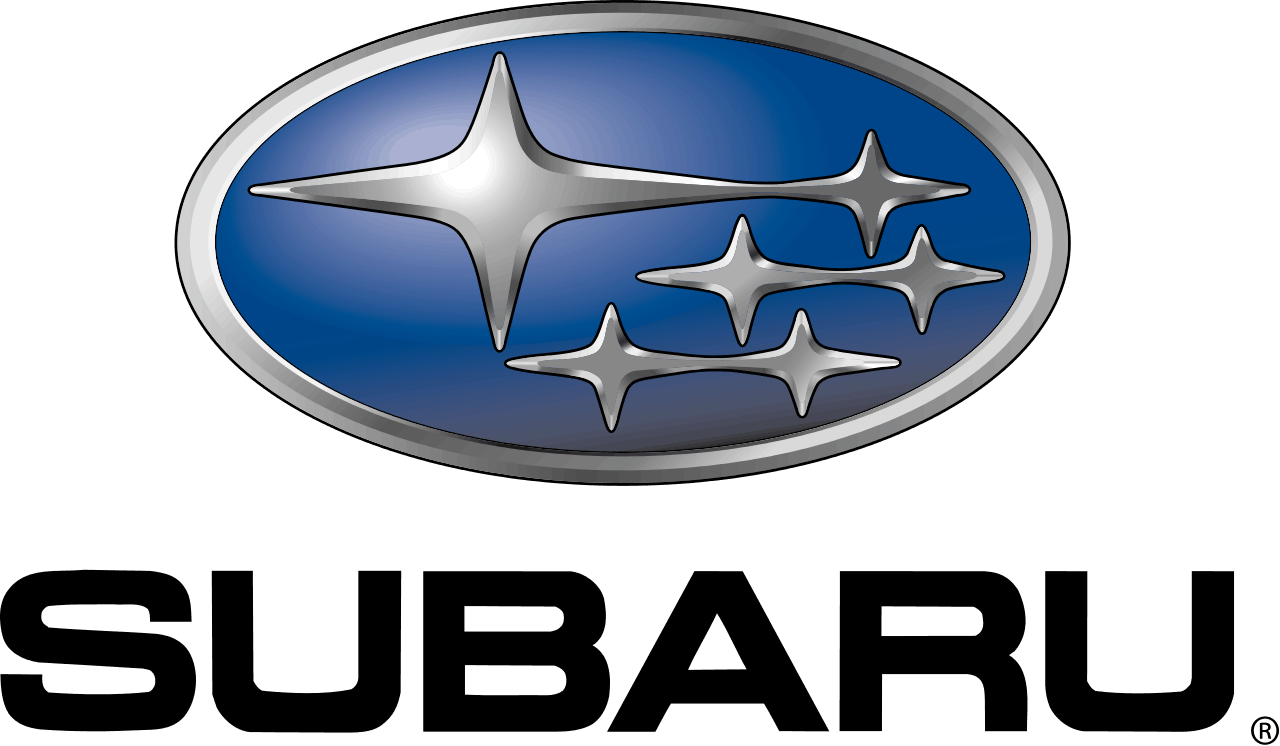 Yet, the Japanese automaker got more endorsements compared to any other car manufacturer. The endorsements were made by independent authorities on automotive safety and quality.

For years now, Subaru has been known for car performance, utility,  comfort, and reliability. As a matter of fact, Consumer Reports said the Japanese automaker produces some of the best cars in the US. Even ALG, the arbiter of used-car prices and value in the industry, named the company as the leader when it comes to providing the best value compared to the mainstream brands. After several crash tests, Highway Safety Insurance Institute made Subaru the “top safety pick” among all other manufacturers.

As for consumers like us, we see Subaru as the company that has excellent, affordable, and tunable sports cars. For instance, Impreza STI WRX can be tuned up to 550hp. This can be done easily! If you choose to upgrade the brakes and the suspension, you are sure to get a dazzling track car that’s ultimately wicked as it can compete with other sports cars out there.

Car enthusiasts have the Forester, Outback, and Impreza on top of their favorite list as these cars get more and more reliable by the year. In this article, you’ll come to know the fastest cars the company has made since they set out in the industry. Keep on reading to know what they are.

In the late 1980s, the legendary car designer behind BMW M1, Volkswagen Golf, and DeLorean DMC-12, Giorgetto Guigaro, was given by Subaru the freedom to design a self-indulgent grand tourer. Shockingly, Subaru sent Guigaro’s concept into production. What’s more shocking is the fact that it did only a few cosmetic changes. As you might have guessed, the result was 1992 SVX.

This car hits 0-60 in just 7.3 seconds. As for its top speed, it’s at 143 miles an hr. The big coupe got the favor of the manufacturing company for quite some time and it’s equipped with a 3.3L flat-six engine. It also rocked 224 lb-ft of torque and 230 horsepower. This car is definitely a GT car. It costs almost $10,00 more compared to the other models of Subaru’s lineup. The company only produced the SVX with automatic transmission, which was why it was prone to overheat. For the 90’s car buyers, the avant-garde sheet metal, funky interior styling, and wind-dispersing side windows were a bit too much for them. SVX has now become a collector’s car and it was only produced for five short years. 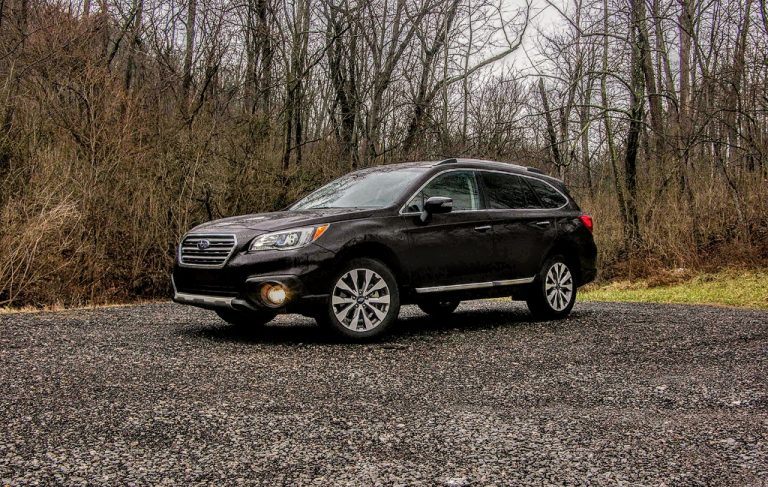 The Outback is the all-wheel driving vehicle of Subaru and it has long served the company. Car buyers just can’t get enough of this one, and with a good cause: it is soberly reliable, safe, and handsome – not to mention being of great value. This is definitely the perfect car for modern families. The standard comes with a 2.5-liter engine and it leaves car buyers drooling with its performance level. You can also opt for the 247 lb-ft of torque and 256 horsepower. Its top speed may be limited running at just 139 miles per hr, but it can go from zero to sixty in just 7.1 seconds. Still, this won’t win you a lot of drag races. If your plan is to possess enough power to ensure highway passing and merging is fun, then you’ll be better off with this car. 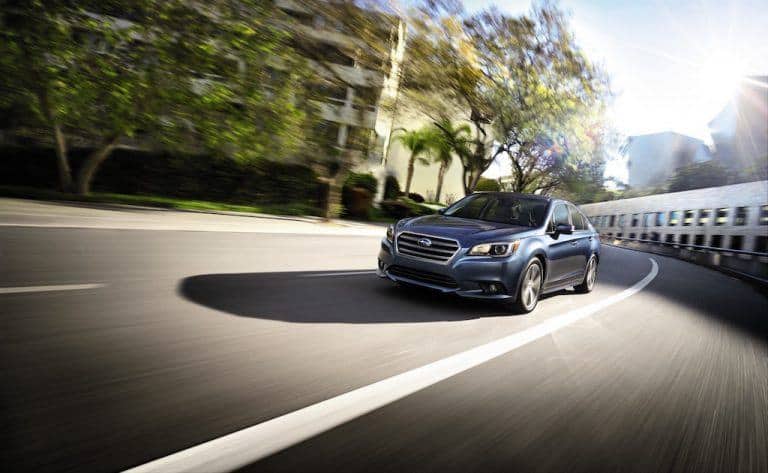 Mechanically speaking, everything about the Outback 3.6R that makes it a mildly thrilling car for families can be found in Subaru’s Legacy 3.6R. But, of course, there’s no extra cargo room and no long roof. The Legacy 3.6R is slightly lower in ride height, but the Legacy and the six-cylinder Outback are closely related to each other and you can witness it with the engine, Continuously Variable Transmission, and the all-wheel driving system. This respectable midsize sedan of has a big motor with 247 lb-ft of torque and 256 horsepower. Its top speed is at 139 miles per hr. As for the 0-60 time, it’s at 7.1 seconds. 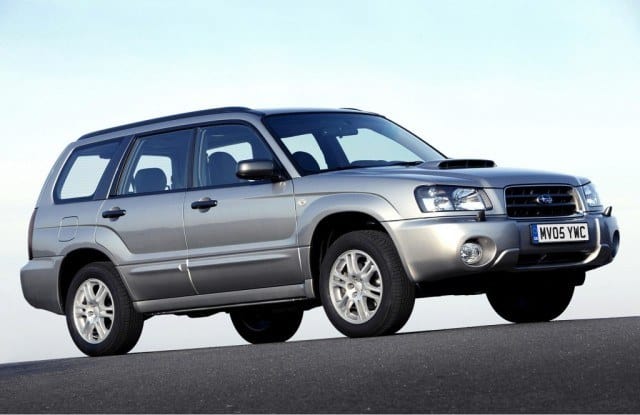 It is pretty wild if you think about how the Forester, which is a lite crossover, can easily outperform the other cars that have been listed here so far. Yet, it is true. The Forester 2.5 XT is an extraordinary people mover. Its turbocharged 2.5-liter engine that produces 250 horsepower and revised gearing makes it a sleeper car. The vehicle hits 0-60 in just a quick 5.9 seconds because of the car’s mechanical similarities to the WRX. If you want to make it go even faster, all you have to do is swap out a couple of key parts and you’re set!

An old cliché which states that it is more enjoyable to drive fast with a slow car than to drive slow with a fast car is taken home by none other than the BRZ. It was jointly developed by Subaru and Toyota, which is why Toyota 86 is almost identical to the BRZ. This compact sports car boasts 205 horsepower. To some, the power may be too light but it is the most satisfying car to drive from what’s available on the market today. Its fantastic chassis and six-speed gearbox make the car a fun vehicle to drive. What’s more, you can get it for less than $30,000. 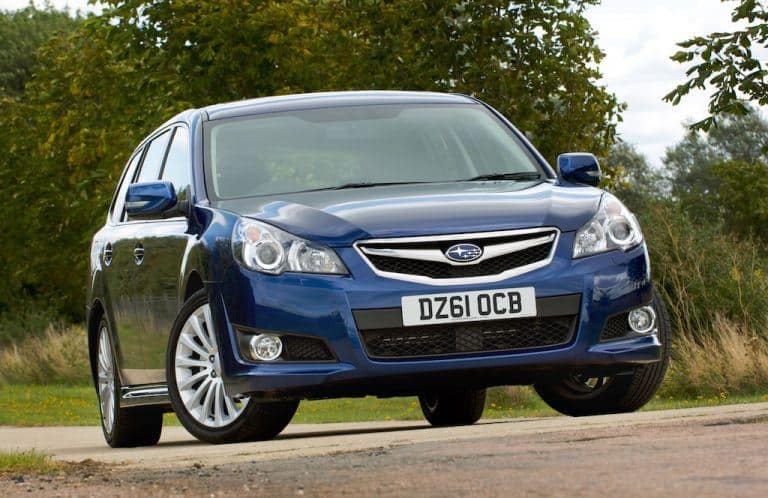 The 2010 up to 2014 models of the Legacy 2.5 GT may look like just ordinary used cars, but they bested the much larger and latest 3.6R flat-six because they share the same genetic makeup with the mighty STI of Subaru. 2.5 GT Limited’s turbocharged flat-4 engine makes the 0-60 in just 5.8 seconds. It was available on manual transmission and the top speed was set at 150 miles per hour. If you are a performance seeker, you are in for a surprise as this hot Legacy has 258 lb-ft worth of torque and 265 horsepower. If you ever come across a rare Legacy GT wagon with a clutch, you should buy it immediately as it is a unicorn that’s been equipped with extreme power. 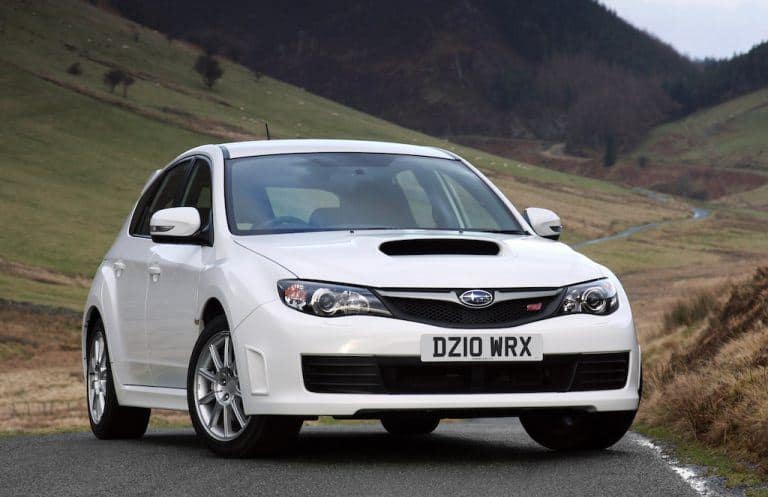 If you ask what can be done to improve the base WRX, Subaru also asked the same question and they came up with a wonderful answer: turn it into the WRX Sport Wagon! Although Subaru halted its production, this WRX Sport Wagon was once a rally machine that’s capable of jetting past its competition. It can run zero to sixty in just 5.8 seconds. During its peak a decade ago, the turbocharged flat-4 of the Sport Wagon had 217 lb-ft torque and 227 horsepower, thus it is among the coolest carpool vehicles from all over the world. 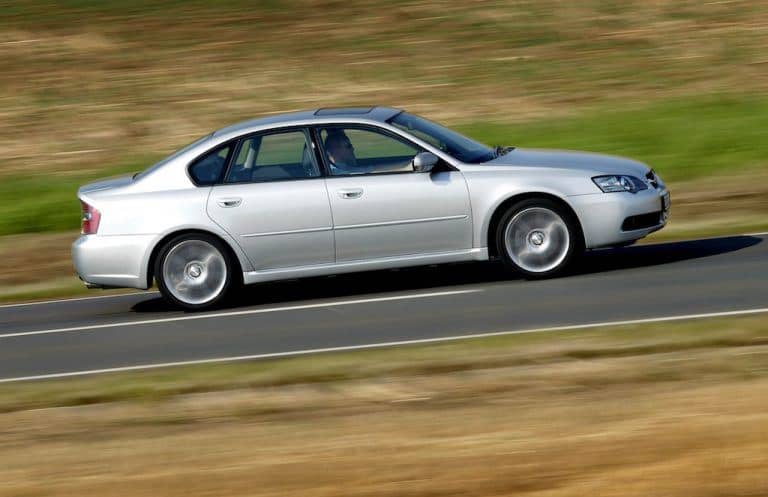 The Japanese automaker only made half a thousand GT spec.B sedans from 2006 to 2009.  For a Legacy, they are a bit on the pricey side. What’s more, there was only one color available for the spec.B 2006 and that was dark silver. According to industry arbiters, the Legacy GT spec.B has the same 250 horsepower powerplant to that of the Legacy GT. The spec.B also had a very expensive navigation system which cost about $1,200. Still, the model was a catch in its time as it had good suspension, wide wheels, big brakes, and it flew in just 5.3 seconds from a standstill. Also, the increased grip and fatter wheels of the spec.B were great. What we love most about it is that it was available only on 6-speed manual gearbox. It also had a classy limited edition interior. 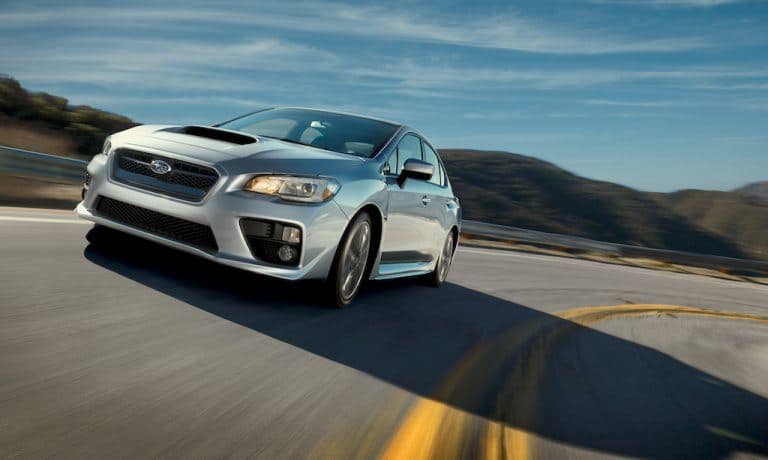 WRX or World Rally eXperimental was the model everyone was waiting for. The vehicle is a favorite among rally drivers and it has seen a number of incarnations throughout the years. The latest base model still holds a place among the fastest cars of Subaru. The WRX is an all-wheel drive and its 0-60 time is just five seconds. It utilizes a 4-cylinder engine which produces 248 lb-ft torque and 268 horsepower. The 2.0L engine is also partnered by a 6-speed manual transmission. Its bigger twin, Subaru STI, overshadows the WRX but it is a high-performance vehicle. You will get the best deal from this one. 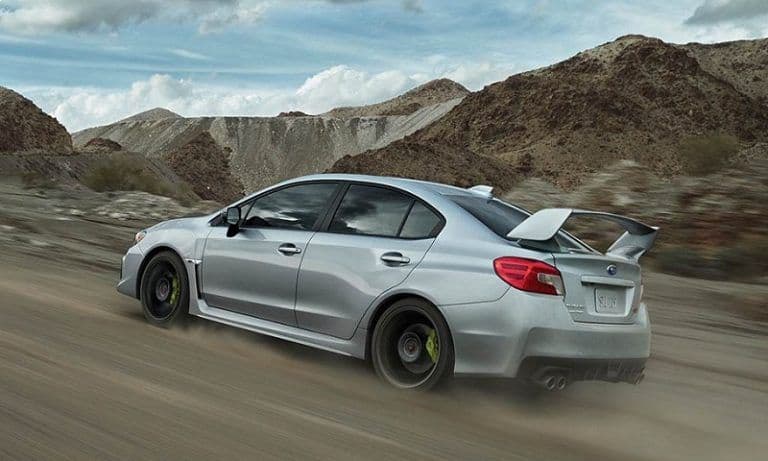 The WRX may be hot, but you should get the STI as it takes no prisoners! The souped-up version hits 160 miles per hr, and it can sprint through 0 to 60 in less than five seconds. Although the STI has more DNA of a rally car compared to the base WRX, it does not compromise when it comes to everyday practicality. For those who are searching for a vehicle that can jet on any road, you’ll want the Subaru STI. 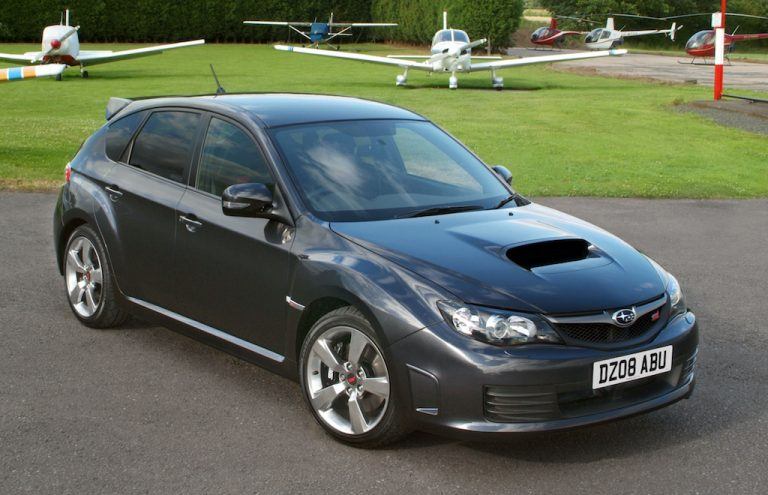 The Impreza 330S is less popular even to the fans of Subaru. However, it has given impressive performance numbers from the past decade. This car blasts from 0-60 in just 4.8 seconds, just like the STI, as it has a 2.5L engine that can crank out 347 lb-ft torque and 325 horsepower. The UK-only Impreza version may be among the best models Subaru has ever built as it has a symmetrical all-wheel driving system and a 6-speed manual gearbox. 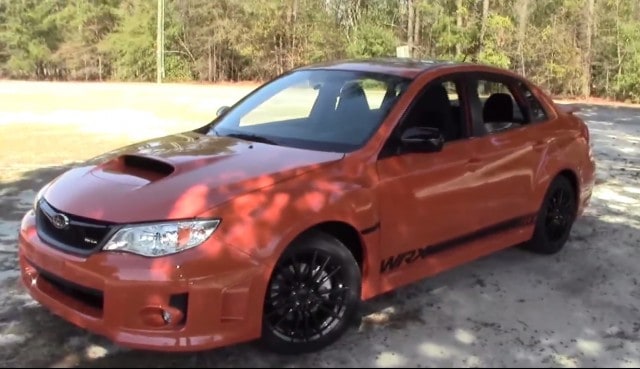 This is the most specialized version of the WRX. It has a signature Pumpkin Orange color, which means it is extremely recognizable. It boasts a 4.7 second record time for the 0-60 run. This tangerine dream that’s laden with decal was very popular when it came out. It has bigger and blacker wheels and a wider body. It’s a beast on and off track. 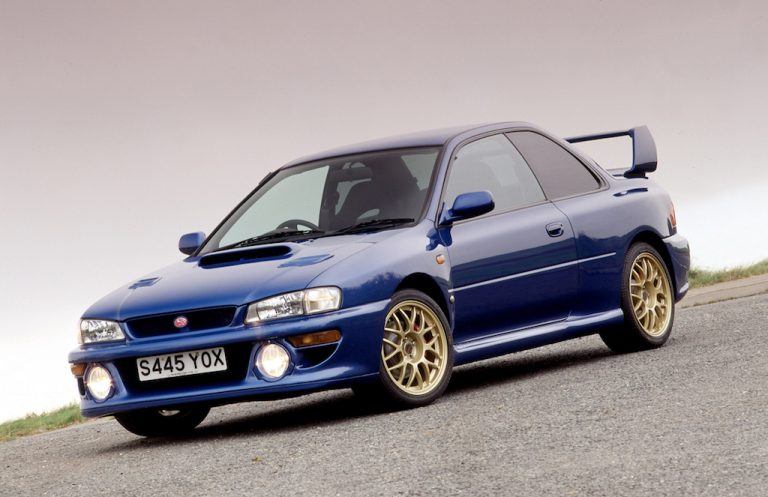 The 22B was ultra limited and it gave startling numbers for a rally car that’s legal on the streets. Rocking the early 1990s look, less than 500 cars were built for Subaru’s 40th anniversary. As soon as the release was announced, the limited number of cars sold out pretty quickly. Its top speed is at 144 miles per hour but could scramble from 0-60 in just mere 4.7 seconds. This bonafide future classic is a monster that has 280 hp. It’s arguably one of the most desirable cars ever built by Subaru.

Subaru engineers have proven to top themselves every single time they release new WRX editions. Among the best ones is the 2012 STI S206. Most Americans are unaware of the vehicle’s existence, but this neck-snapper boasts of 316 hp. It can reach 60 in 4.5 seconds. With its 318 lb-ft torque and serious JDM cred, you have a car designed to make high school-age gearheads drool. 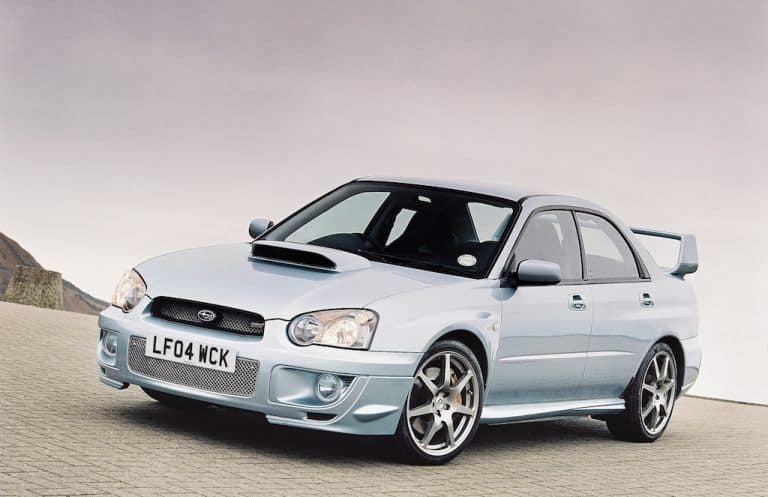 At first look, the WR1 seems milder compared to its brethren, but it’s extremely advanced when it comes to performance. It produces 342 hp from its 2.0L four-cylinder engine and can hit 155 miles per hr without any issue. It goes 0 to 60 in 4.3 seconds, and it’s both expensive and rare.