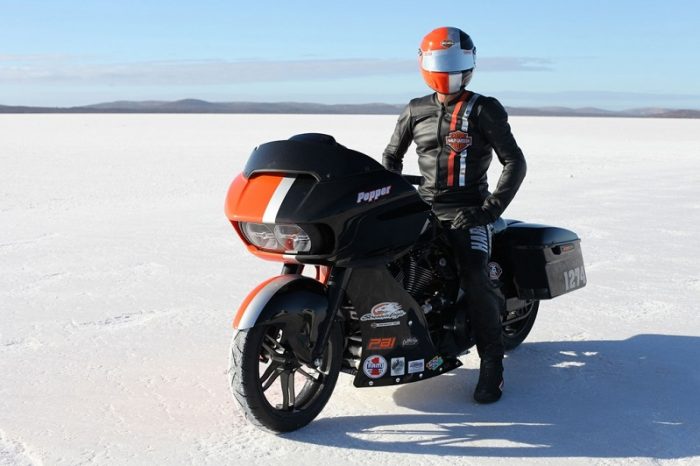 Or at least the fastest Bagger in Australia, that’s under 2000cc. Underneath, it’s your average 2015 Road Glide Special but with a few modifications and a little bit of engineering, this machine can hit speeds of up to and over 160mph (256km/h). On a recent sunny day down at Lake Gairdner in Australia, pilot Corey Buttigieg managed to break the local land speed records for an unmodified bagger, and yes, it reached those speeds with the bags on!

Now, Bagger style motorcycles aren’t for everyone, we can accept that. However, if you’re tackling a cross country tour and you want easy access to your luggage, a quick way to stow your shit and keep everything safe and secure, then they’re exactly what you need. Some of the may have been modified into ‘over the top’ machines but every now and again you get something like this: a salt racing marvel. Again…with bags on. 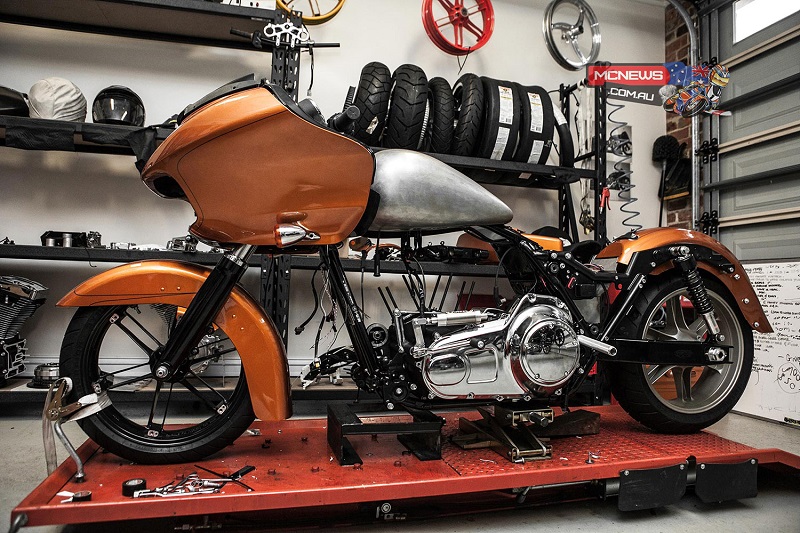 The brains behind the build is Harley’s Advertising and PR Manager, David Turney who said about the whole thing: “We wanted to create an absolute powerhouse and make a statement in a way that only Harley-Davidson can. And those hanging onto the bagger stereotypes of size, weight, power and agility, better get ready to see those misconceptions race past at speeds that’ll surprise you.” Nothing garners publicity like smashing a land speed records, that’s for sure. 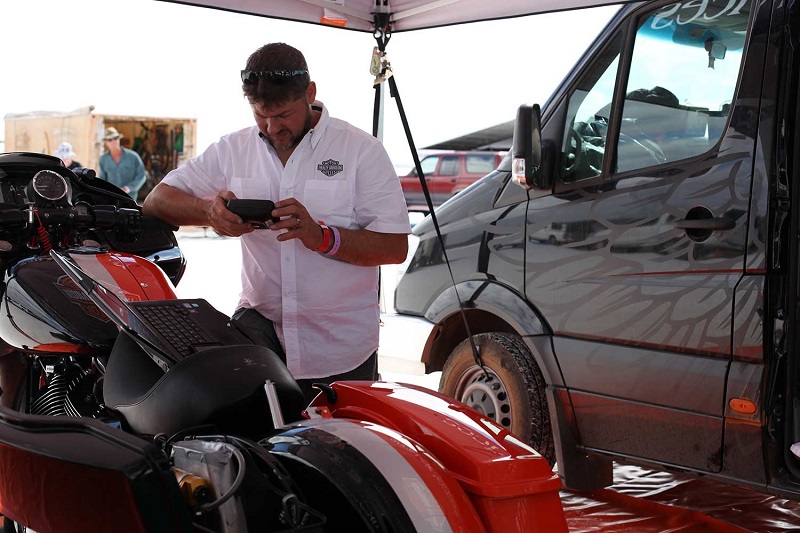 Following the regulations for their classification – the bike must be under 2000cc and must use a stock chassis (although minor modifications are allowed) – Team Harley began by calling in their top technician Dan Lesnock, who then took control by stripping down and rebuilding a 2015 Road Glide Special, carefully putting it back together in a way that resembles the full on bagger appeal. To turn the pack horse into a racing machine, Harley used a liberal amount of Screamin’ Eagle performance parts, including a variable pressure clutch and a 120RX engine kit. On top of that, they also used a new PBI sprocket with a RK chain and custom Wegner stainless steel headers. The modifications made to the frame include a new swing arm that sits four inches longer than the stock, custom built fairings for the sides and below the engine, an OE front fairing that sits slightly lower on the frame and a set of saddle bags with built in air diffusers. And they’re fully operational storage devices too! 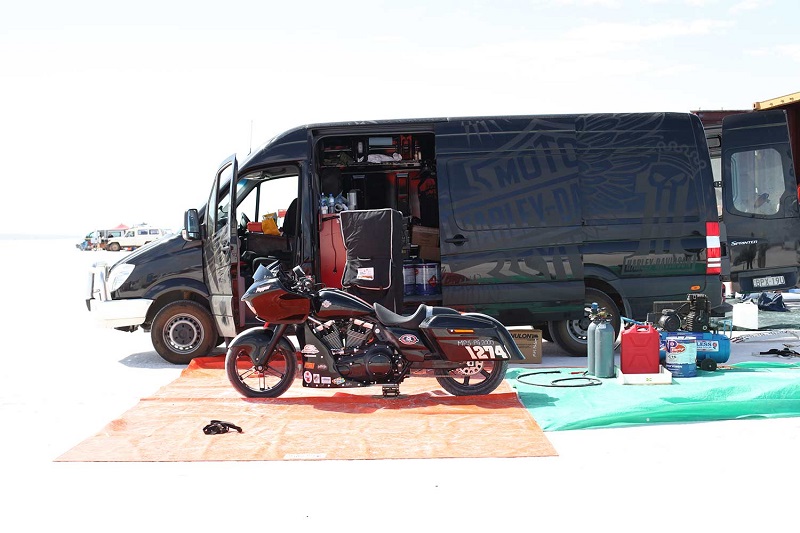 The build itself was stretched over twelve months, nearly a whole year’s worth of design and engineering from Harley Davidson Australia & New Zealand’s leading technicians. When the Bagger hit the salt flats at Lake Gairdner for the 25th annual Dry Lakes Racers Australia (DLRA) Speed Week, it hit a fantastic speed of 165.131 mph. The current World Record for a Bagger is currently held by Chris Rivas with a 3000cc machine and an aftermarket chassis that clocked in at over 200 mph, so for 1000cc less, this is certainly the fastest Bagger without too many modifications! 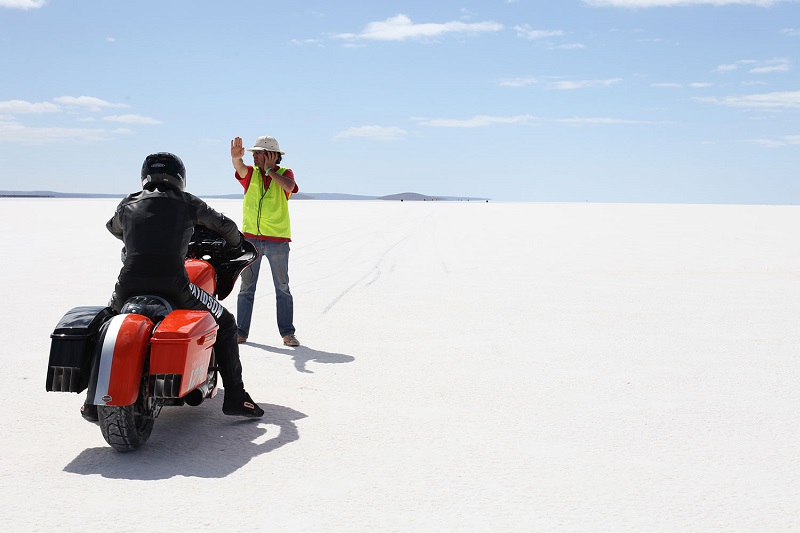 David Turney explained: “This is a fantastic achievement for all the guys, especially considering this is Pepper’s first official event and on a very unfamiliar surface. They’ve worked tirelessly. Even up to the night before we hit the salt they were burning the candle at both ends to make sure we were as prepared as we could be.” 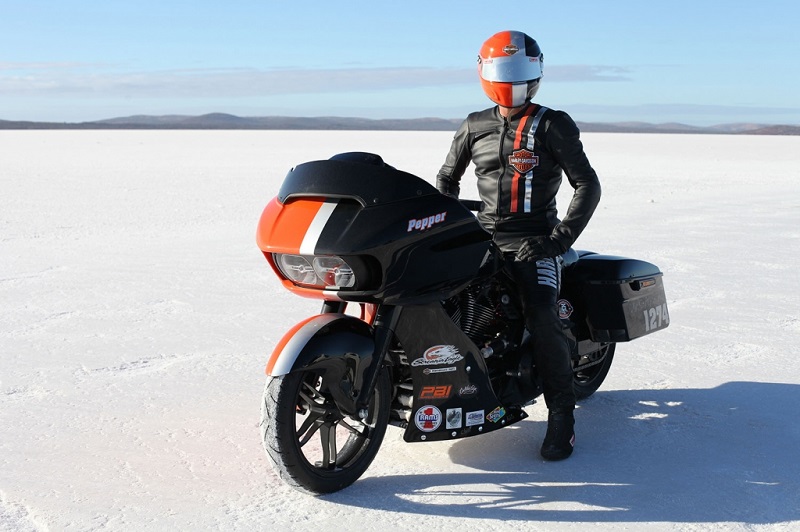 If you want to see more of this beast in action, check out the video below. It’s a bit long at 11 minutes but well worth the watch if you’re into a bit of speed, classic Harley Baggers, or Bagger racing in general!