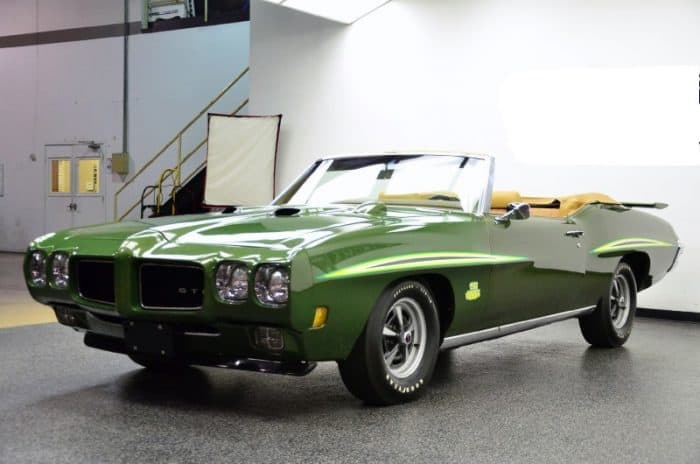 No matter how you look at it, convertibles have been, are, and always will be rarer than cars with tops. It doesn’t matter whether it’s the soft or the hardtop convertible, they are simply a selective company. The same goes for the classic muscle car convertibles. They too were rare, and some of them were rare beyond our wildest dreams. In fact, some of them were so rare that you could have counted them with your fingers. In addition, they were as powerful as muscle cars could get back in the day, so the exclusivity is even more supreme. Let’s face it; very few of us will ever get the opportunity to see one of these live, let alone in action or, God forbid, own it. Not unless you’re prepared to pay premium buck for them. Here are 10 of the rarest and most powerful classic muscle car convertibles.

Our choices are genuine classic muscle car models, and while there are plenty of other cars that could fill a generic “Best Classic Convertibles” list like the Alfa Romeo Spider, Mazda Miata, or myriad of Aston Martin units, if they ain’t an American classic from the golden age of muscle, they’re not getting on this list! If you want to look at other sports car models, we have other lists for that. So without further ado, let’s look at the best classic convertibles from the muscle car era!

These Are The Rarest Convertible Muscle Cars Out There! 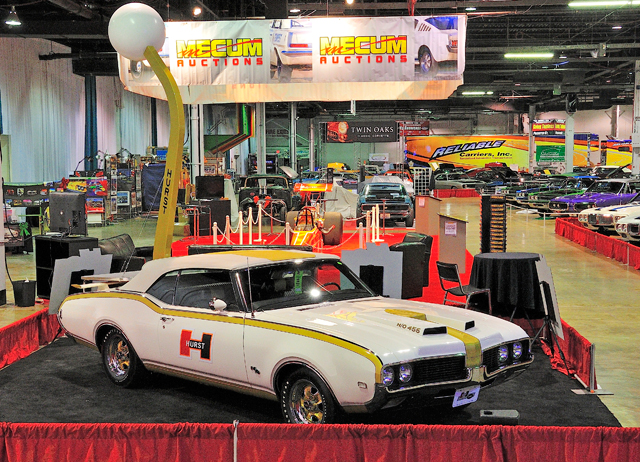 Hurst Olds was first introduced in 1968 as special edition of the Oldsmobile 442 or Cutlass Supreme. At the time, it was against Oldsmobile’s policy to stuff anything larger than the 400ci into the engine bay. Well, Hurst Performance didn’t share that policy, so they packed the 455ci Rocket V8 in there which developed 380 hp and 500 lb-ft of torque. Of course, they mated the engine with their famous dual/gate shifter.

A total of 906 1969 models were made, but only 3 of them were convertibles made for promotional use. Moreover, one of them burned straightaway leaving only two models alive. You might remember them for their humongous trunk platform-installed golden shifters and, off course, the Miss Golden Shifter herself – the one and only Linda Vaughn. Here’s the video of one of them restored and reunited with then 70-year old gracefully aged Linda. Resto was completed by Level 1 Restorations shortly after the car was found after many years of slumber. They even recreated the giant golden shifter. 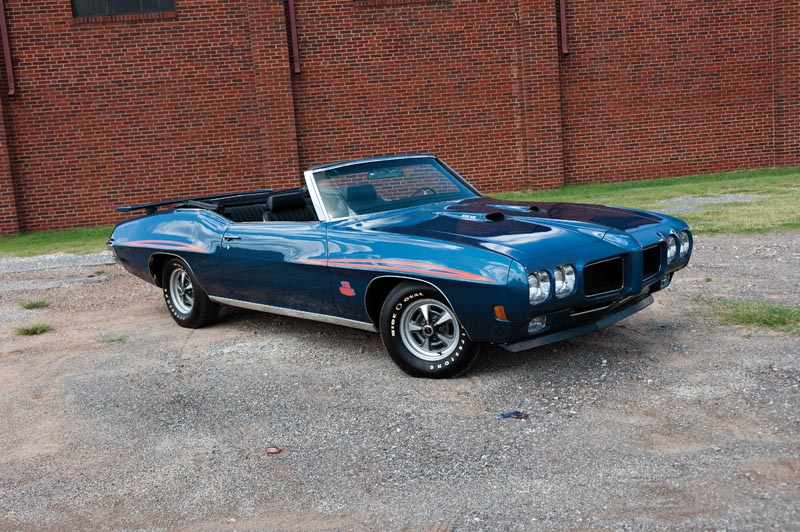 The Judge was first introduced in ’69 and close to 7,000 GTO’s were fitted with the package. However, none were convertibles. They only arrived a year later when the GTO sales plummeted. Less then 4,000 ’70 GTO’s were fitted with The Judge package and only 168 of them were convertibles. Only six of them, however, came with the no cost D-Port 455 HO option making 360 horsepower. Furthermore, there were also 6 The Judge convertibles fitted with the automatic transmission and RA IV engine. The same RA IV which was criminally underrated at 370 horsepower and on which, as speculated back then, the PMD was losing $1,000 in every single model. Maybe that’s the reason they were so rare and didn’t make the ’71 cut. Even in 1971, there were only 17 GTO The Judge convertibles, although all of them had the 455 HO option. Cool cars like this are extremely hard to find, so if you’re looking for an affordable classic then you might want to look for other convertibles for sale instead! 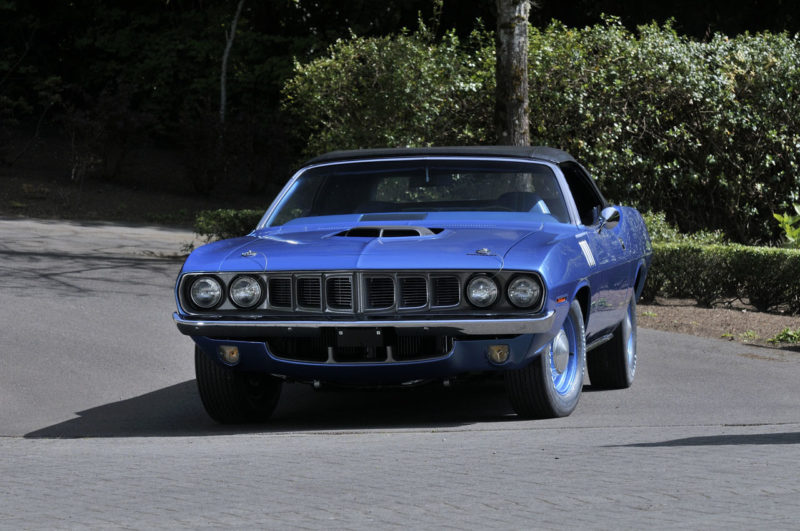 Together with the 1970 model year, total Hemi ‘Cuda convertible production numbers add up to 21. That is still one extremely low number for the mass produced car. 1971 ‘Cuda with the 425-horsepower Hemi V8 under its hood is the most expensive muscle car ever sold, commanding the price tag of $3.5 million. The reason might be because it’s the only original ‘Cuda convertible left with the Hurst shifter. Even if you’d like one of the slightly less exclusive models, you’ll have to be prepared the premium buck for them. Even back in the day, the Hemi upgrade cost $871 and $1,228 in ’70 and ’71 respectively. For comparison, the next most powerful option, 6-barrel 440ci Super Commando, only cost $250 initially. That’s why so few people ever ordered them. 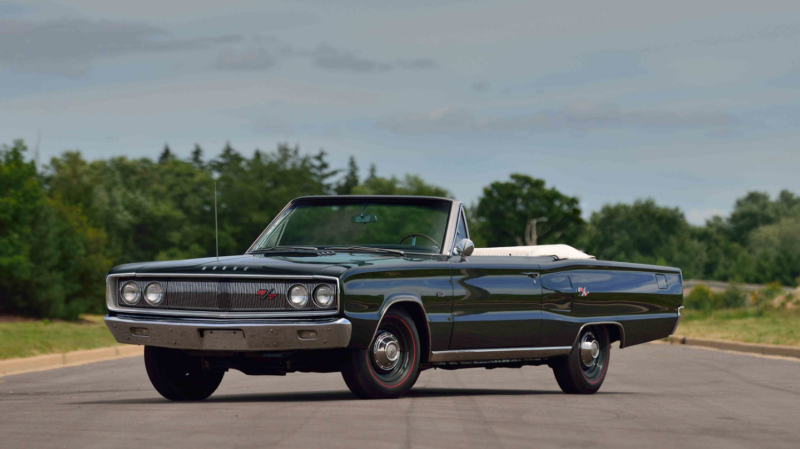 Just like the Hemi ‘Cuda, R/T Hemi Coronet too was powered by Mopar’s most prominent engine to date. 1967 was the first year Dodge Coronet offered the R/T package. Standard engine was Magnum 440ci with up to 375 hp, but there was an optional choice. The 426ci Hemi with 425 hp. It was an expensive upgrade which pushed the price tag into luxury land and only three Coronet convertibles were ordered with this setup. R/T two-door hardtop convertible would return in 1970 for another spin after the recent makeover. Two additional models were ordered pushing the total production numbers to 5. In addition there were 5 Dodge Coronet R/T Triple White convertibles for the Canadian market. They were promotional copies fitted with the 440ci Magnum engine and the Super Bee emblem. 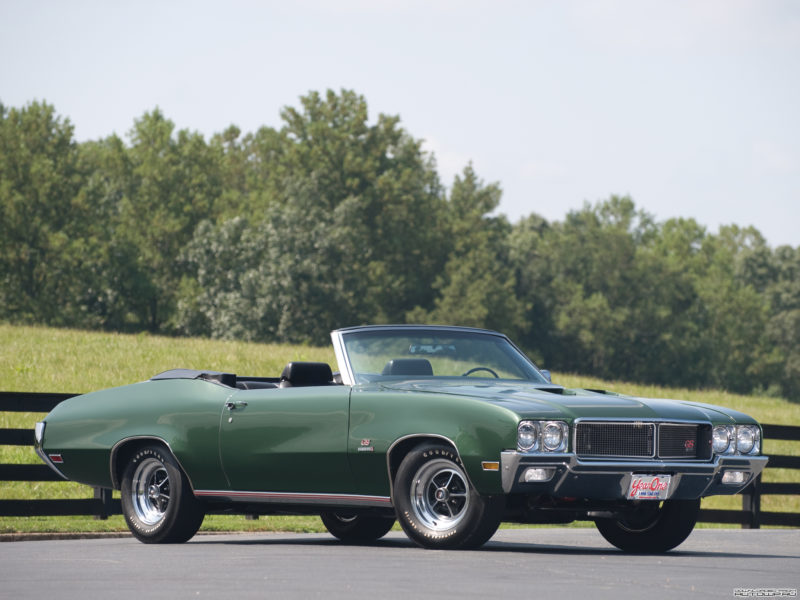 As far as we know, there was only one Buick Gran Sport Stage 1 convertible with the 3-speed manual transmission and a standard 3.64:1 Positraction axle ratio produced. We don’t know how that’s happened since regular options only included the Muncie M-22 4-speed manual transmission or the Turbo-Hydramatic 400 3-speed automatic one. In any case, the GS Stage 1 was already one of the rarest muscle car convertibles by itself. It featured the 360-horsepower and 510 feet-pound of torque 455ci big-block V8. That also makes it one of the most powerful classic muscle cars of all time. Those were definitely the most exciting years for the muscle car scene. 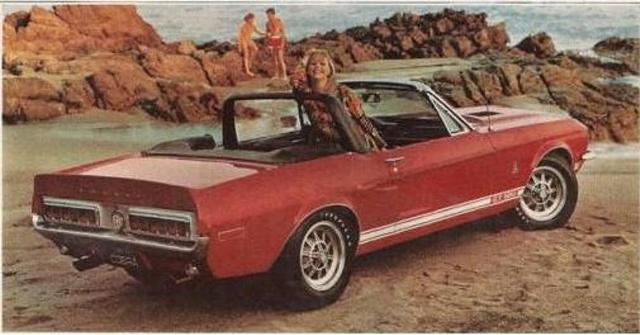 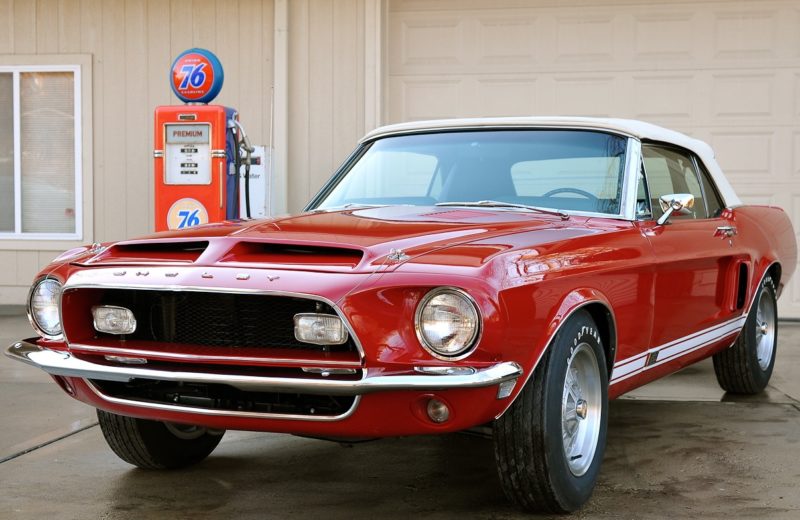 However, Shelby American was struck with fiberglass issues and were unable to complete the orders. Ford had to step in and Shelby VIN 0139 became the very first and only big-block Shelby Mustang convertible. It was labeled a “company car” and according to Carroll Shelby himself, intended as his own “personal driver”. It ended up being driven by one of the women working in executive offices at the L.A. facility. Carroll Shelby, you dog! It was seized by Ford after terminating the Shelby American operation, only six months later. In the end, this iconic muscle car was sold through Ford’s corporate “B-Lot”. It’s now fully restored to its former glory, as you can see from the picture below. This Ford Mustang convertible is a one of a kind classic convertible that deserves serious recognition! 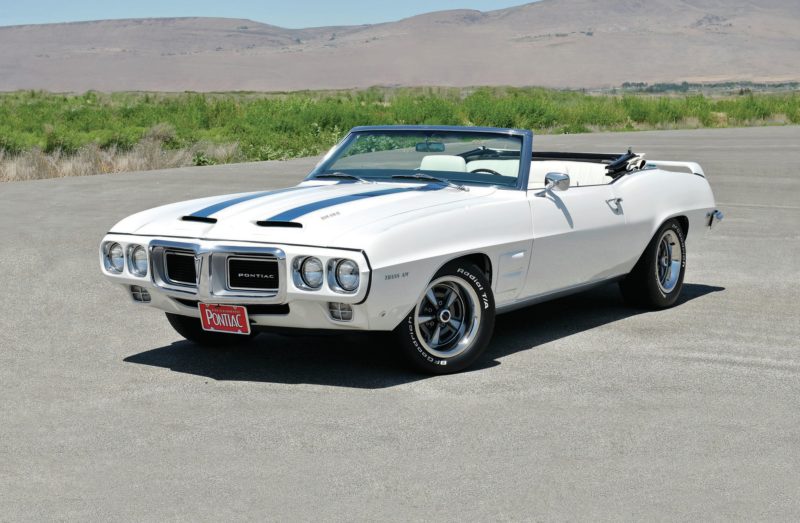 One of the most renowned muscle cars of the bygone era hasn’t featured a convertible between 1969 and 1991. Even in 1968 and 1969, there were less than 30,000 of them commissioned. But the real deal was the Trans Am package first offered with the ’69 models. It was an expensive $725 option at the time so it doesn’t surprise us that only 689 new coupe owners decided to give it a go.

Furthermore, only 8 Firebird Trans Am convertibles were ordered, and all of them were RA III models. In other words, all of them were fitted with the Ram Air III V8 engine. That was the second strongest option at the time having 400 cubic inches and 335 horses. Only 345-horsepower Ram Air IV of the same displacement was more powerful. Finally, four of them were automatics and the other half of them were manuals. Seven have been accounted for and they’re all in fine shape while the eighth is still missing. 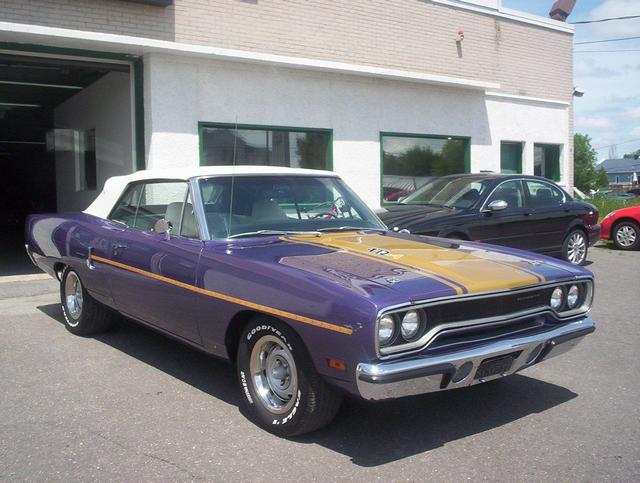 There were 10 Hemi-powered convertibles for Road Runner’s first convertible production year of 1969. 1970 models were even rarer and that would end up being the last year for Road Runner convertibles. Of 834 total convertibles for 1970, only 4 of them were R-Code Hemis. One of them was exported to Canada (pictured below), while three have remained at home. Just like any other 426ci Mopar-powered muscle, 1970 Plymouth Road Runner generated north of 400 horsepower and offered imposing performance figures. One of the interesting options for the model year were the “high impact” color schemes like the Vitamin C Orange, In-Violet or Moulin Rouge. 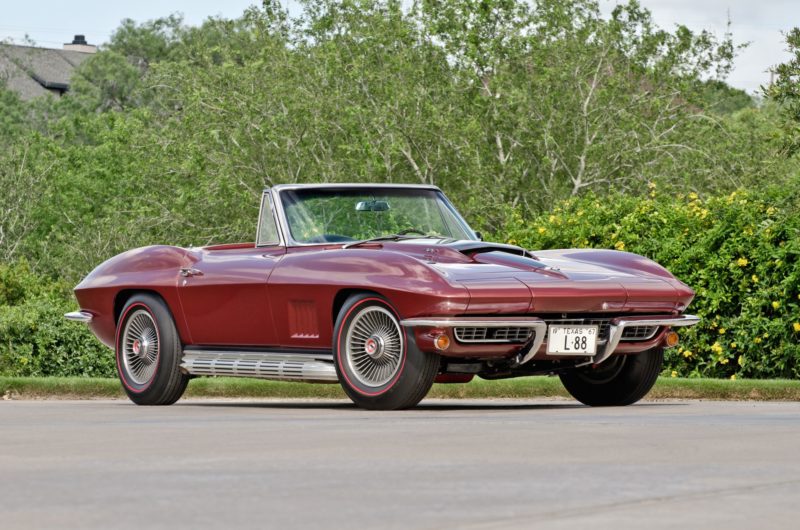 The L88 C2 Chevrolet Corvette is the most coveted Corvette of them all. There were 196 of them produced as C3 models in 1968 and 1969, but only 20 of them were C2 L88’s. Even rarer were the convertibles. We know there were at least three of them made, one of which was sold for $3.2 million in 2013, but the exact number of these convertibles still evades us.

In any case, L88 was intended as the racing car and Chevrolet indirectly discouraged people from buying them as road cars. They did this by discarding the radio and the heater, for instance. Moreover, they mandated the options like the performance suspension, Positraction differential, and upgraded brakes. It was an expensive affair to say the least costing $1,500 over the base $4,240.75 sticker. But the power output it generated was unheard of at the time. Officially, the ’67 Corvette L88 was rated at 435 horsepower. Real world figures ended up being somewhere between 540 and 580 horses, however. High 11 second quarter mile time wouldn’t have been able with the “meager” 435 ponies anyway. 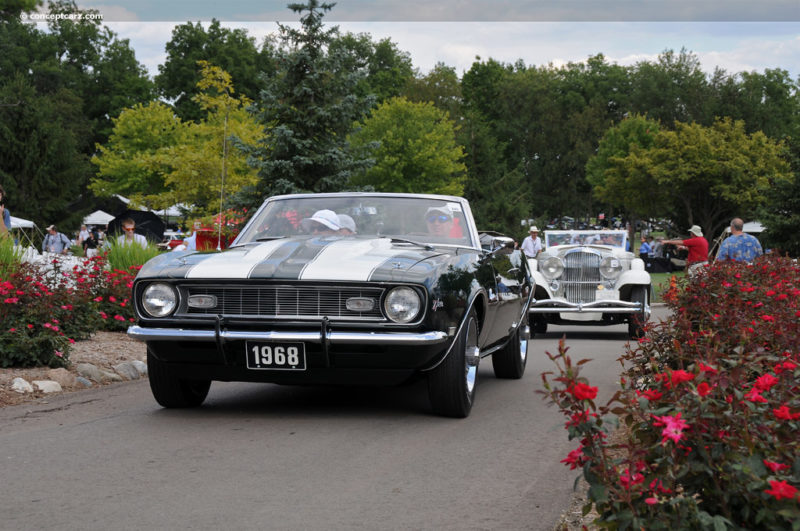 It can’t get any rarer than this. There was only one ’68 Camaro Z/28 convertible produced, and it was the executive car. In fact, it went to then GM chief Pete Estes. It was painted Dark Fathom Green and it came with goodies such as 4-wheel disc brakes, performance suspension, Koni shocks, cowl plenum fiberglass hood which was a prototype of the ’69 Camaro fiberglass hood, cross-ram intake, and tube headers. It’s currently owned by Dana Mecum (for the second time), and it might end up on one of his auction blocks when/if the car guru decides it’s the time to pass it along to someone else. That someone else will have to splash some serious dough for it, though. It has a 302ci Z28 V8 with 290 factory and 360 real world horsepower, after all.

These incredibly rare classic car models are certainly some of the rarest classic convertibles out there – but are they the best? If rarity wasn’t part of the equation, which other models would you feature on a top 10 classic convertibles list? How about a Lincoln Continental, or a Cadillac Eldorado? And what about future classic models? Are there convertible muscle cars around today that you think will be a sought after model in the future? Let us know in comments!


Top 10 Most Expensive Car Crashes Ever
10 Of Our Favorite Front-Wheel Drive Cars
The Best of 2021 Ford
7 Facts About the Ford Emblem: A Complete History Since 1903
The Psychology of Driving: What Your Driving Says About You
Ranking the Best and Worst Lamborghini Models for 2020