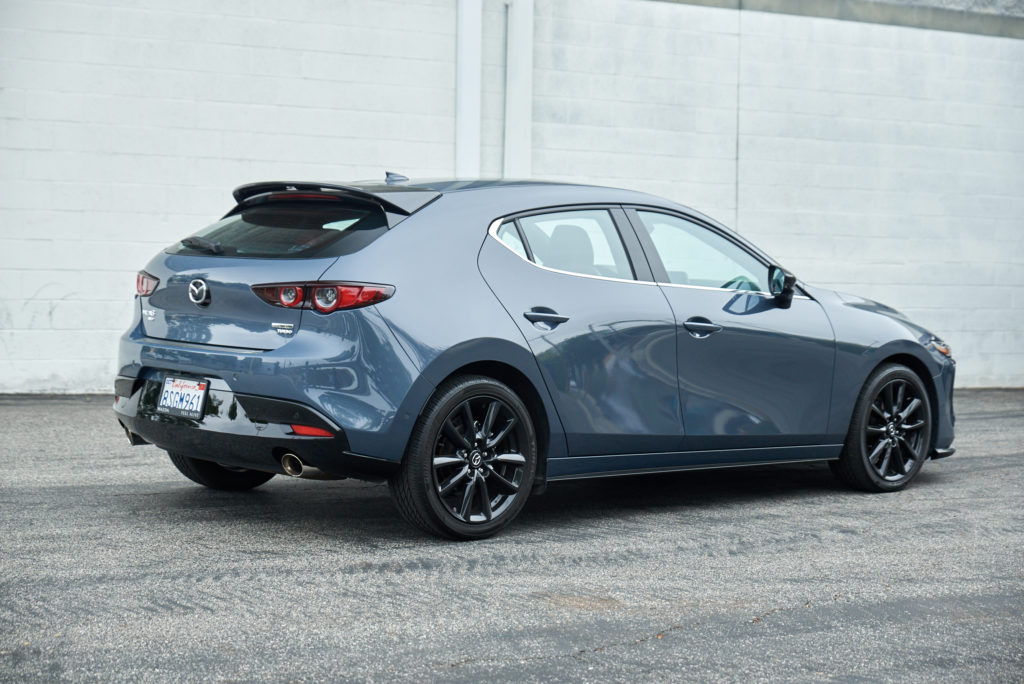 As someone who learned to drive behind the wheel of a 2nd generation Mazda3, the Mazda hatchback holds a special place in my heart. In 2016, when I found out about the MazdaSpeed3, I sorely wanted one but ended up with a Mini Cooper S instead. Fast forward to August 2020 when Mazda revealed the 2021 Mazda3 2.5 Turbo Hatchback (which also comes in a sedan).

With 250 hp, 320 lb.-ft. of torque and all-wheel drive, I thought I would crown the 2021 Mazda3 2.5 Turbo the hot hatch king! Well, after a week of driving one, I realized I was wrong. This is not a MazdaSpeed3 successor but rather a nice hatchback with power. So, let’s talk about how it drives, how it looks, and for whom Mazda designed this hatchback. 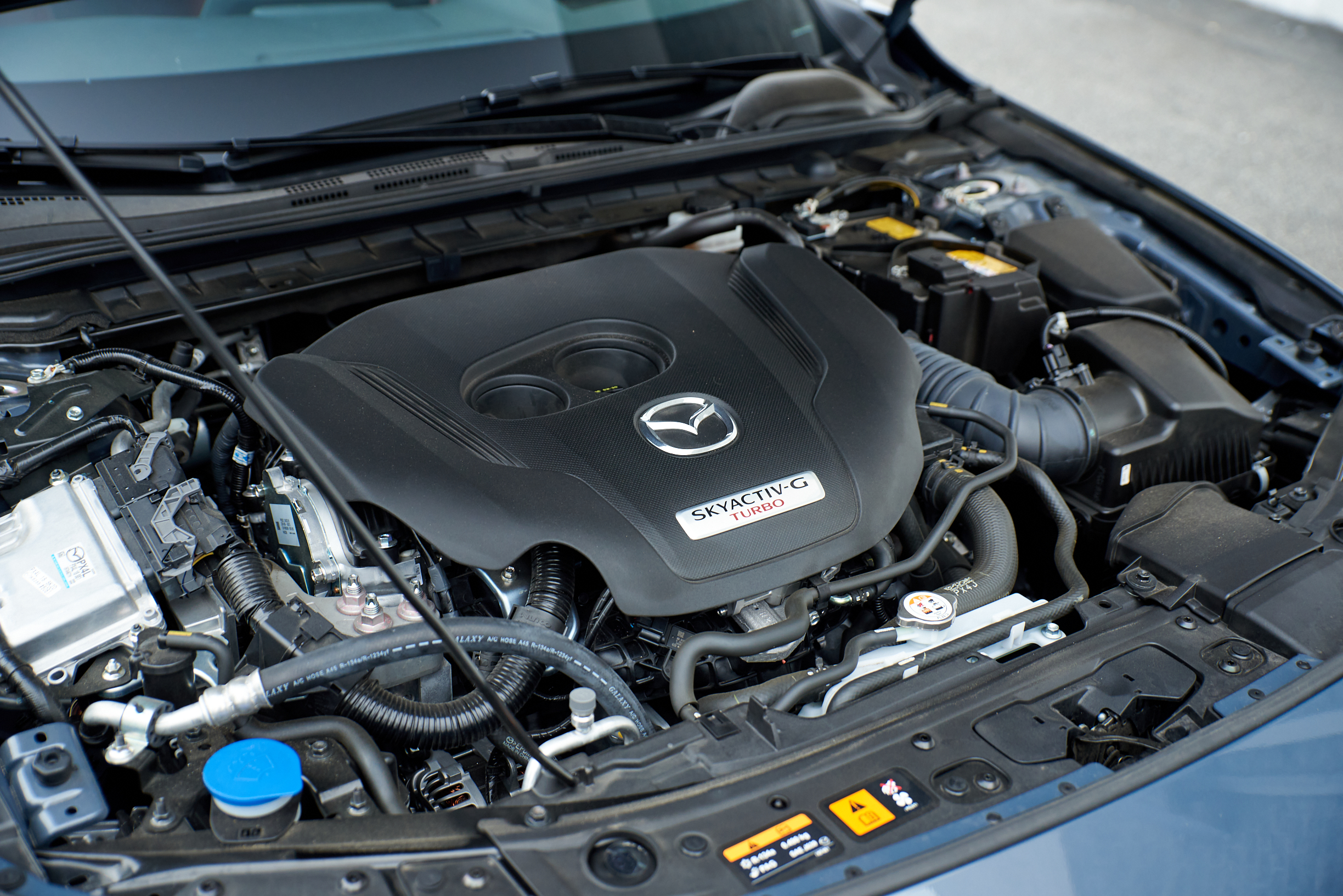 On paper, the 2021 Mazda3 2.5 Turbo hatchback is fast, and in testing, it’s fast as well. 0 to 60 mph happens in 5.9 seconds. The sensation of speed is nowhere to be found, though. Off the line, it feels heavy. Rather than a launch, the hatchback gets a sluggish start with a feeling like the weight of the rear is dragging behind it.

However, once the boost builds up, the jump from 40 mph to 60 mph happens in a blink. My roommate also drove the car and felt the same thing. The turbo lag is real. The car doesn’t feel quick until it’s got some momentum under its belt. This proved to be the case whether gunning it from light to light or navigating on the turns in the canyons.

Precision Handling And Not Much Feedback 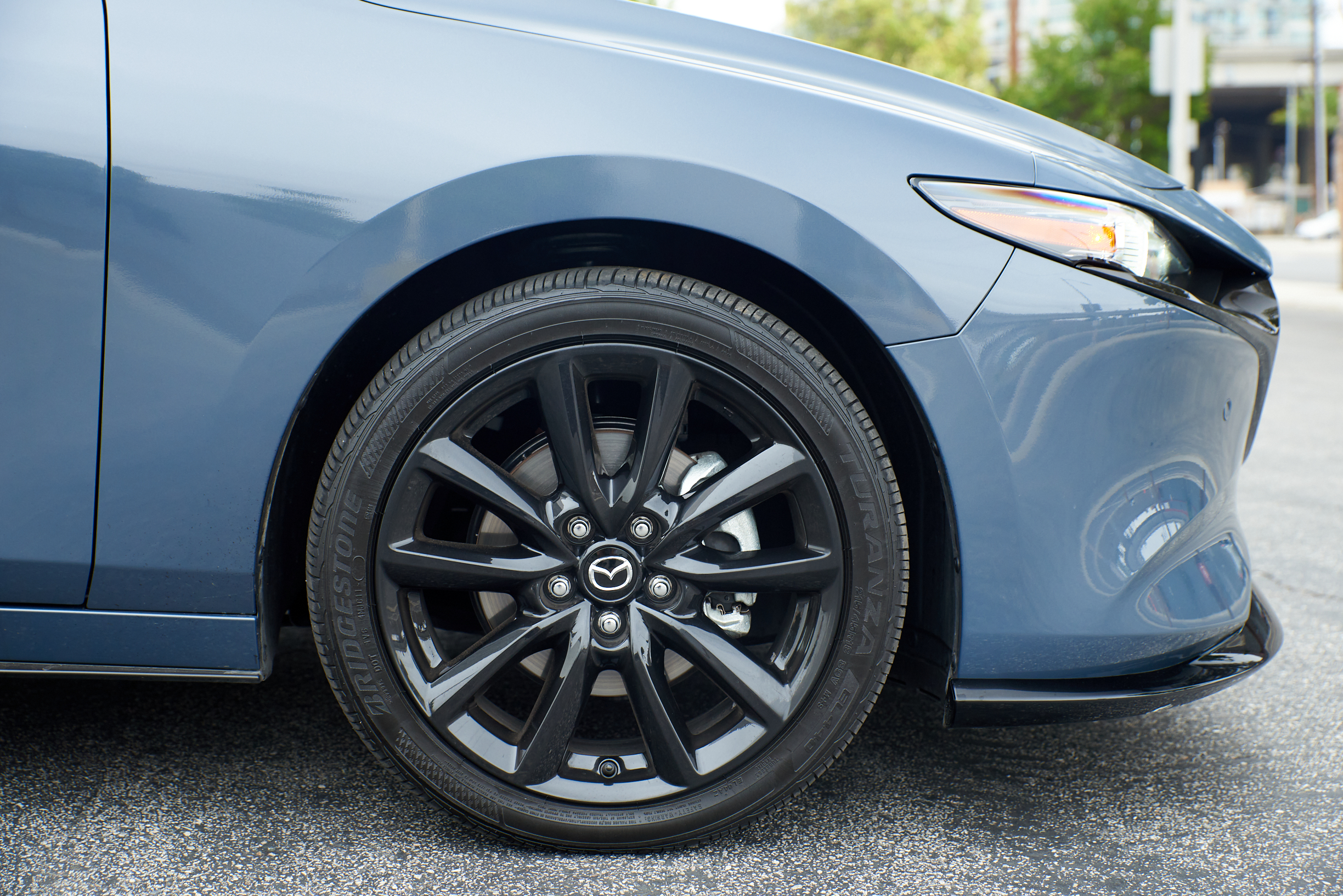 Mazda claims the 2021 Mazda3 2.5 Turbo Hatchback “makes you feel something that no other car can.” This is partially true. I felt precise steering with very little feedback. The car’s thick steering wheel and smoothness made it feel more like I was gliding over the road rather than being glued to it. The car felt like an extension of my arms.

This is great for 95% of driving, but on a track or in a tight canyon road, it made it hard to tell what the car would do. At slow speeds, especially reversing out of a parking spot, the steering felt heavy. The all-wheel drive did add plenty of grip in corner exits, and the car felt pretty neutral with just a touch of understeer.

Tech Check: The Good and The Bad 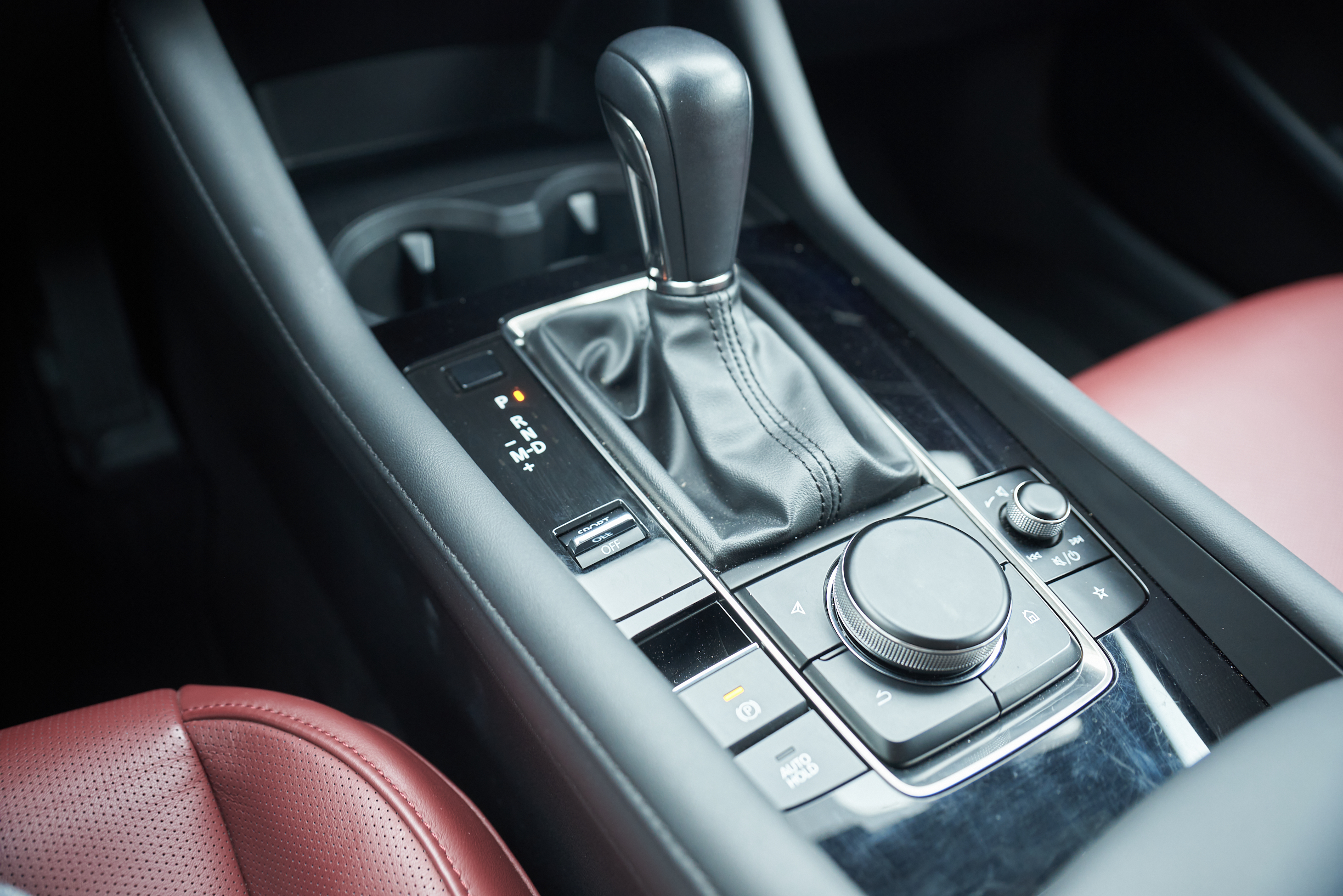 For the first time in a vehicle’s settings, I found “turn signal volume” as an option. That’s right; you can control the volume of the clickity-click of the turn signal.

Unfortunately, the infotainment system’s 8.8-inch screen is not touch-enabled. You control all inputs through a circular controller in the center column in front of the armrest, similar to BMW’s I-drive. This worked well when I was stopped but was not intuitive or driver-friendly while I was on the road.

The car has four cameras (front, side mirrors, rear) which provide a 360-degree overhead view for parking. This is a nice-to-have feature for any car, and I was pleasantly surprised that Mazda made the beep alert noises different for the front and the rear proximity alerts.

Driver’s Aids: Decent But Not Spectacular 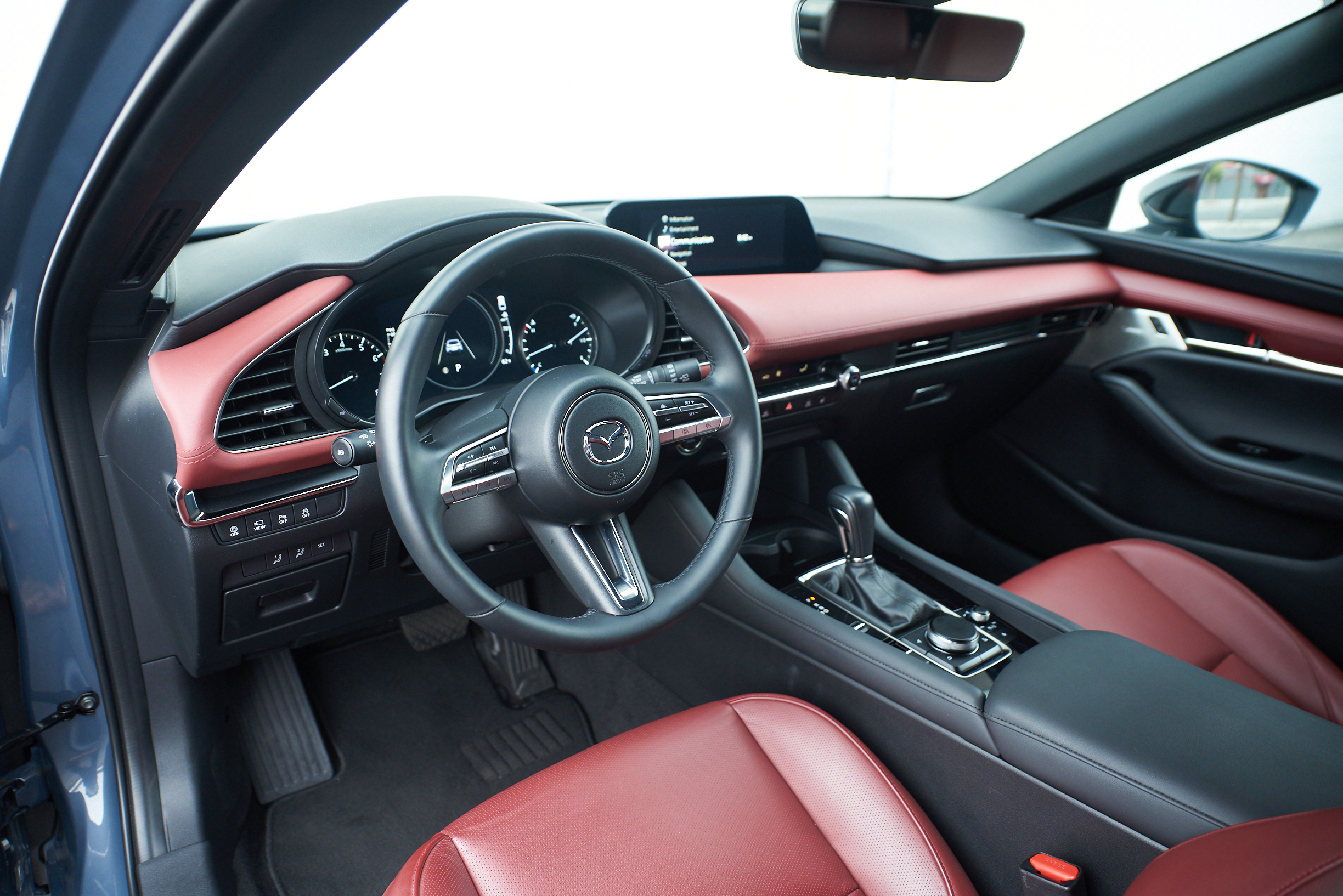 On the road, the Traffic Jam assist feature (Mazda’s name for semi-autonomous driving) worked decently. It automatically kept the car in the center of the lane and kept a set distance from the car in front.

However, the steering assist only worked up to 40 mph. And the keyword here being assist. There were numerous times that the car lost the lane on a fairly simple curve. After 41 mph, you’re on your own for steering. Radar cruise control continued to function as it should. 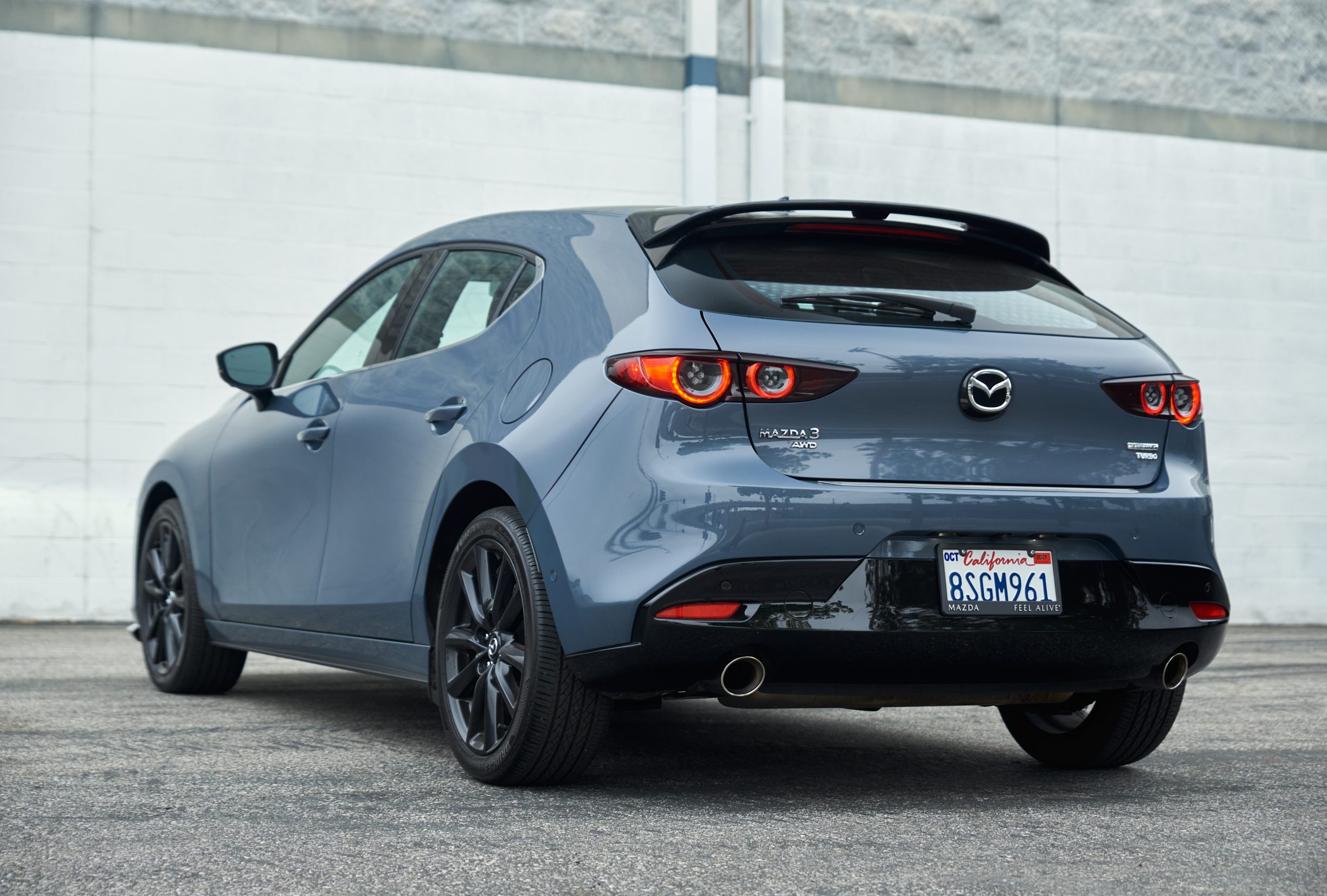 When it comes to practicality, a hatchback is convenient. The Mazda3’s trunk space was large but not as big as others in its class due to the sharper slope of the rear hatch. The rear legroom was sufficient (for reference, I’m 5-foot 8-inches).

The Mazda3 hatchback can easily fit four adults with bags for a weekend getaway. Do warn your rear passengers to watch their heads as they get in — I hit my head pretty hard getting into the back a couple of times. 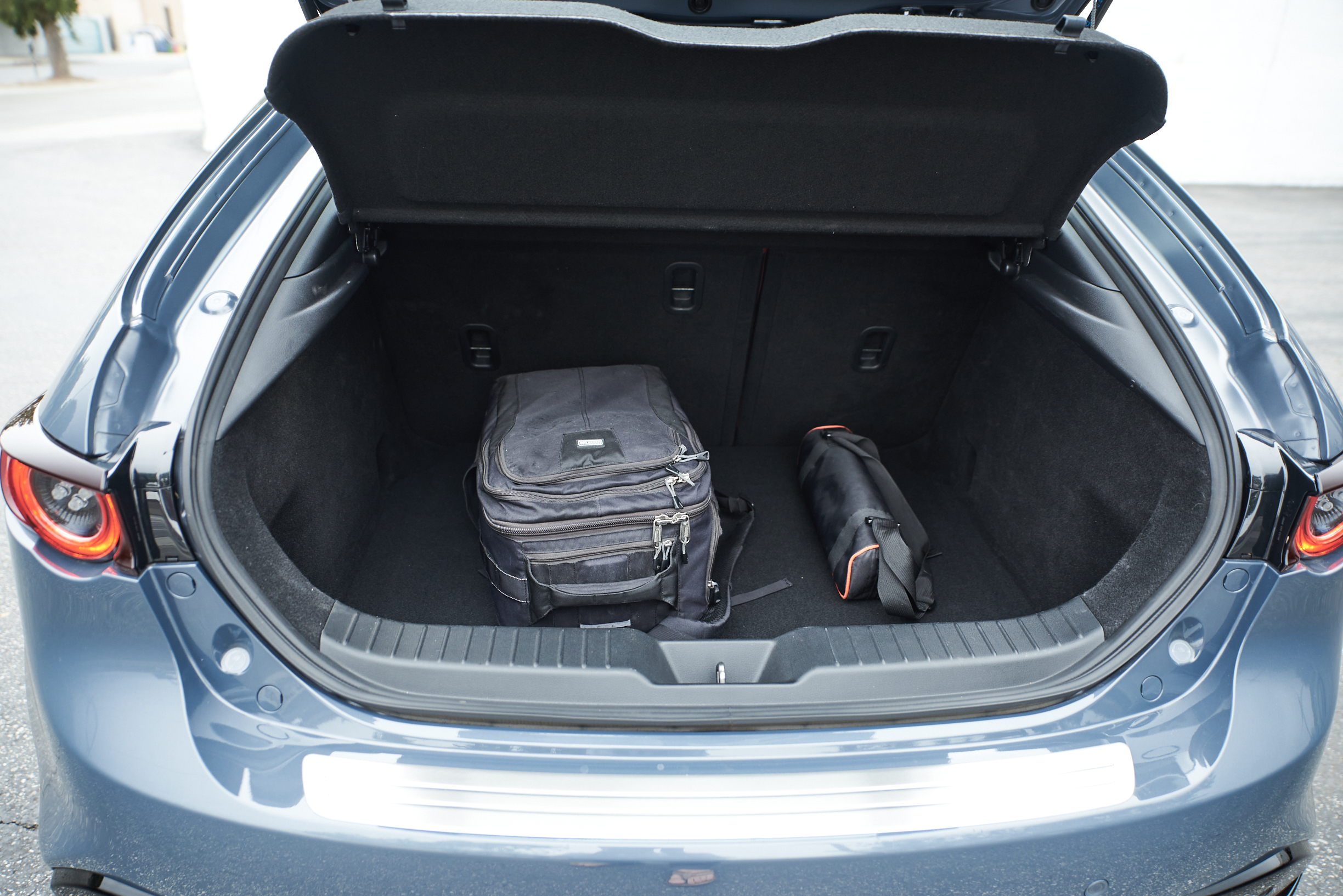 With 300 miles behind the wheel, my fuel economy in the Mazda3 averaged under 20 mpg, mostly in sport mode with plenty of canyon driving. Cruising on the freeway, I saw close to 28 mpg, and the Mazda3 is rated for 26.5 mpg combined.

The interior is very comfortable and, in my opinion, beautiful. The materials are almost all soft to the touch and have a premium feel. The plastic in the center console is the one spot where the materials feel cheap. It is a fingerprint magnet and seems to scratch easily. My demo car had less than 5,000 miles, and the plastic was all scratched up. 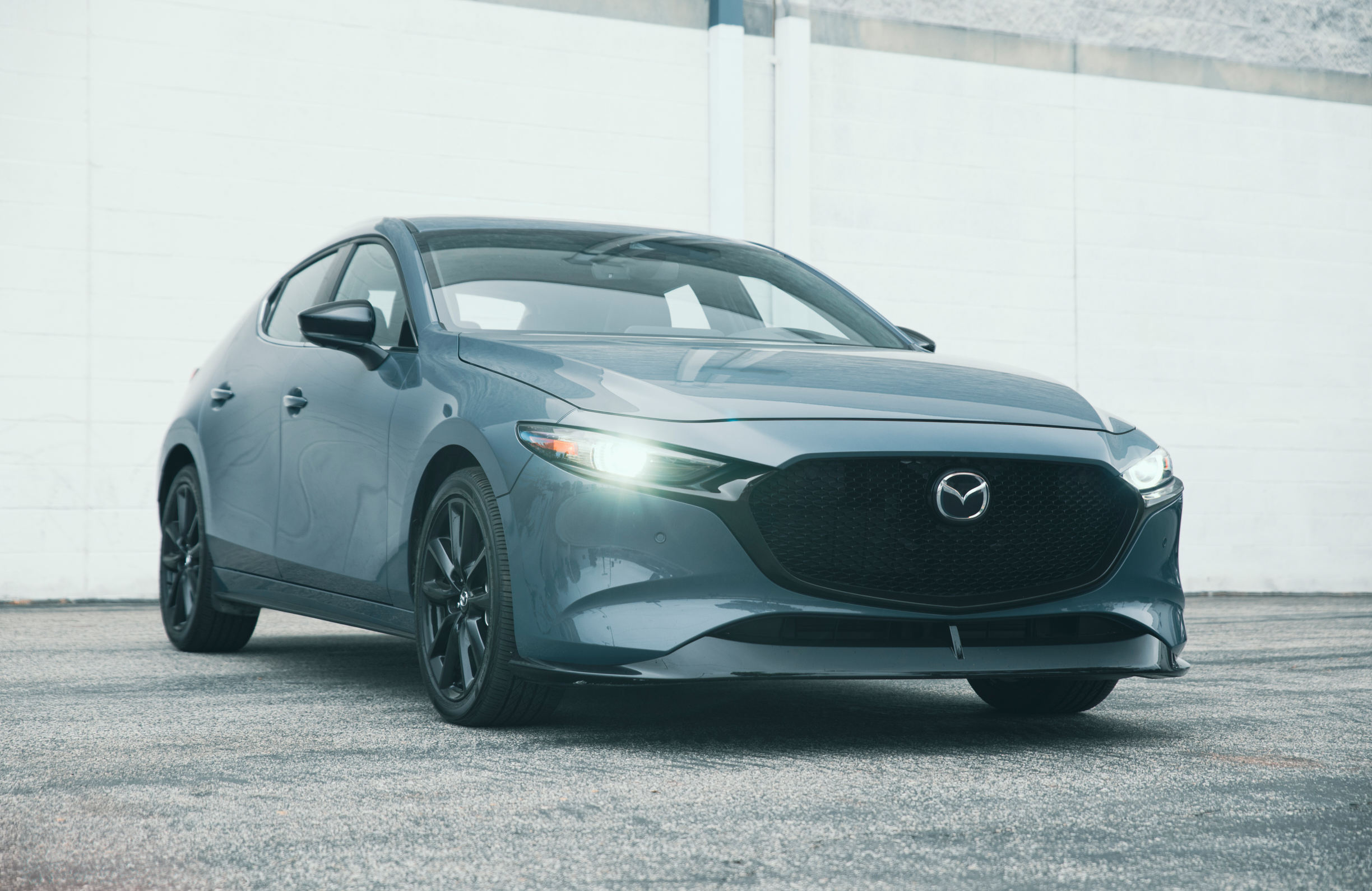 With an MSRP of just over $31,000, I would recommend the 2021 Mazda3 2.5 Turbo hatchback as a low-priced luxury car. It’s got power, fuel efficiency, and plenty of safety tech. It’s one of the best-looking hatchbacks on the road today, and it has plenty of space.

It has traffic jam assist for city driving, and for long road trips, it has radar cruise control. If you want to go snowboarding with it, throw some winter tires on, and the AWD will take care of the rest. It’s a great all-around car, but don’t mistake it for a hot hatch enthusiast car. You can build your 2021 Mazda3 2.5 Turbo Hatchback here.


Mo Money, Mo Toys: Porsche Unveils Companion Car for Your Pr...
Best Full-Size Luxury Sedans for 2022 and Beyond
Top 13 Performance Cars Under $50K
The Best and Worst McLaren Cars in 2020
Need A Girl Car For Yourself Or Daughter?
Top 10 Fastest Volvo Cars