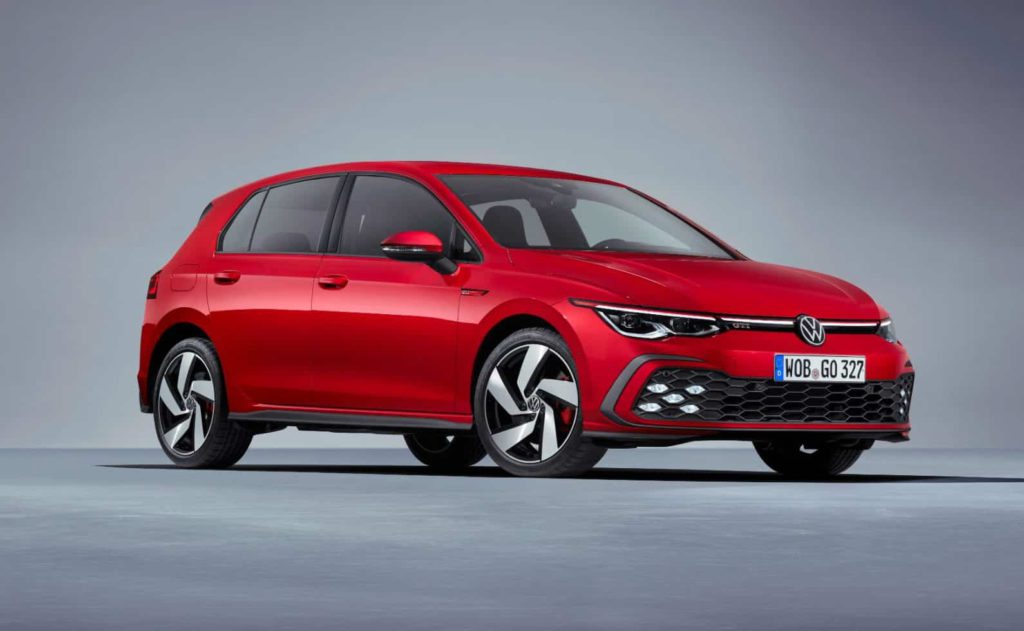 The new 2022 VW Golf GTI Mk8 is expected to arrive in the US in the second half of 2021. Will it continue Volkswagen’s stronghold on the compact and sporty hot hatch market?

Since the mid-1970s Volkswagen has offered a sporty version of their Golf hatchback, which they call the GTI. Now in its eighth-generation, the VW GTI continues to define the hot hatch market. The original GTI Mk1 only offered 90 HP, some sporty accessories, and the now-iconic red accents. Its fun-to-drive demeanor made it an instant hit. Now, eight-generations later, the VW Golf GTI Mk8 offers 242 HP and elevates the luxury options, upgrades the safety features, and includes a bunch of shiny new tech. There is little doubt that the forthcoming 2022 Volkswagen Golf GTI Mk8 will make customers around the globe very happy. 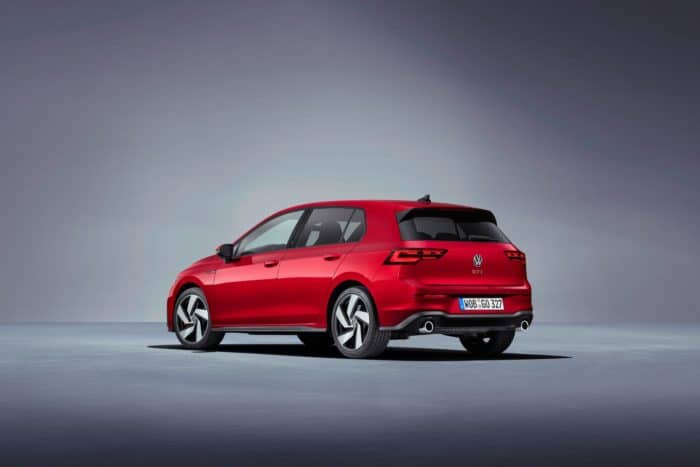 The eighth-generation Golf GTI plans to pony up 242 hp and 273 lb.-ft. of torque. Power comes from a new version of its current 2.0-liter turbocharged four-cylinder powerplant. Customers can choose to mate this engine with a six-speed manual or a seven-speed DSG automatic transmission. 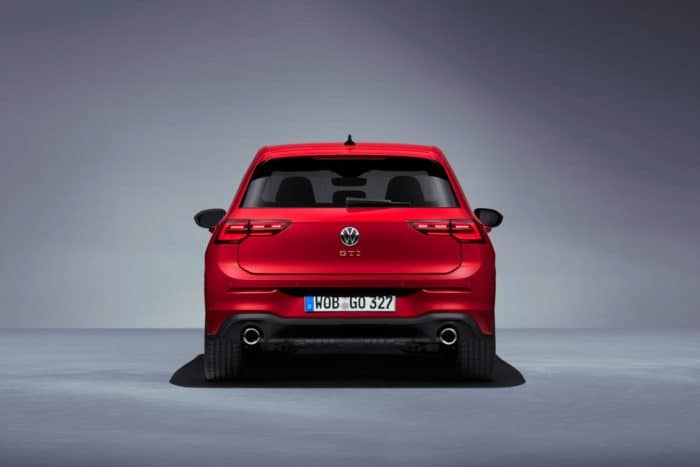 The GTI Mk8 will showcase smoother and sharper lines but keep similar measurements to the Mk7. The 2022 moniker offers a vivid light display with LED headlamps incorporating a red and while lighted strip across the grille. Optional unique fog lights can be integrated into the air intake in an X-shaped design. 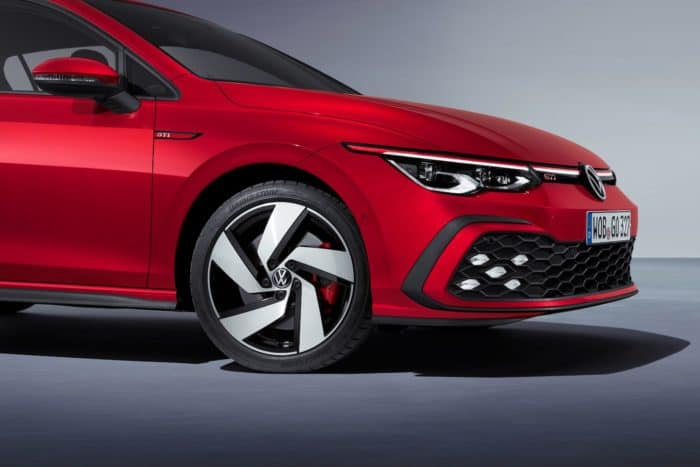 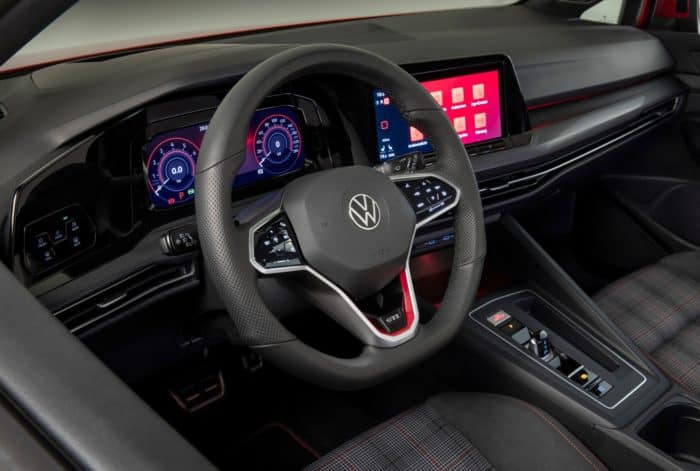 The driver will enjoy an in-dash entertainment control center residing within a 10-inch touchscreen. An automatic Climatronic climate control resides underneath it. The driver will also commandeer the road with a Volkswagen Digital Cockpit (available with a heads-up display system).

Eighth-generation GTI owners can personalize their sporty hatchbacks with mood lighting. The dash and passenger compartments can be modified with up to 30 colors. Updated Car-Net1, with available in-car WiFi2, and wireless cellphone charging also now comes standard. 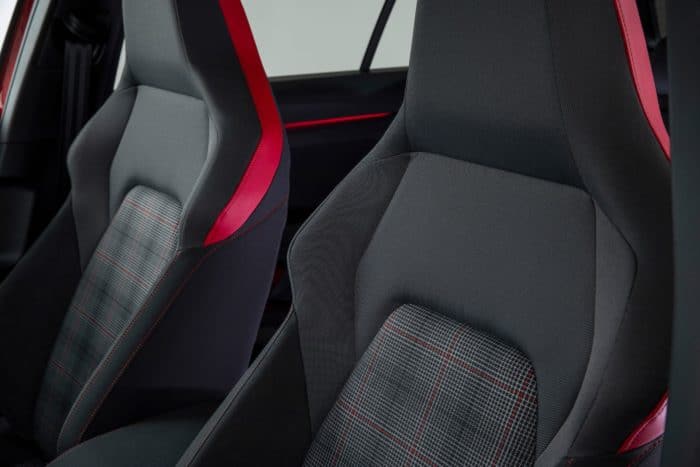 Along with a powerful engine, gobs of safety features, and a sleeker appearance, the new GTI Mk8 still remains true to its DNA. There’s still a golf-ball shift knob atop the stick shift and plaid fabric inserts on the cloth seats. But, VW is expanding its seat cover offerings and will offer a new checked design called “Scalepaper.”

First launched in 1975 at the Frankfurt International Motor Show, the Volkswagen Golf GTI captivated thousands of automotive enthusiasts. The GTI created a new category for autos: hot hatches. Energetic front-wheel-drive compact cars didn’t take off until the Golf GTI blazed onto the market. What were only 5,000 units planned for the initial introduction ended up being over 460,000 GTI Mk1s rolling off the assembly line. Now in its eighth-generation, Volkswagen has shaped the sporty compact car class with its successful GTI moniker. 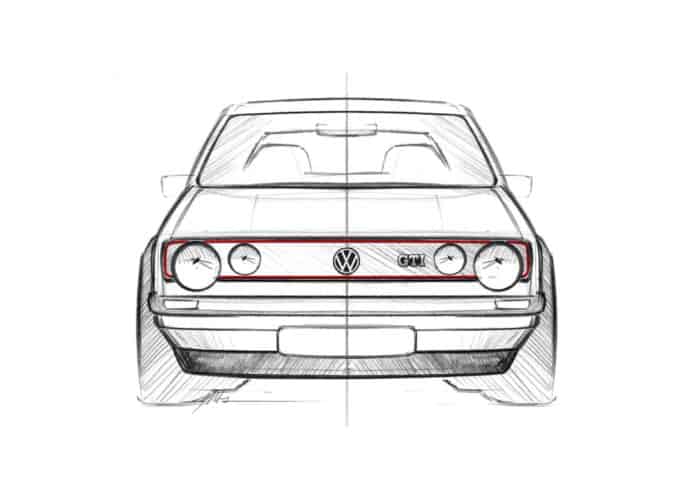 Later GTI versions extended the Mk1’s intent, and kept iconic details like the red strip in the radiator grille and plaid sport seats. 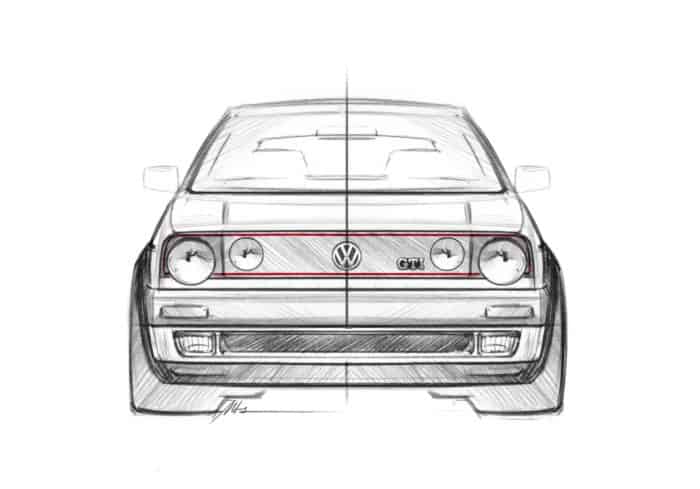 Starting in 1984, the GTI Mk2 hatchback showcased lower horsepower due to the addition of a catalytic converter. But, have no fear, VW had an answer to that and upped the power two years later with a new 16-valve engine which boasted 129 horses. A few years later, the Golf GTI G60 edition showcased the G-Lader supercharged engine and boosted its output to a peppy 160 HP. 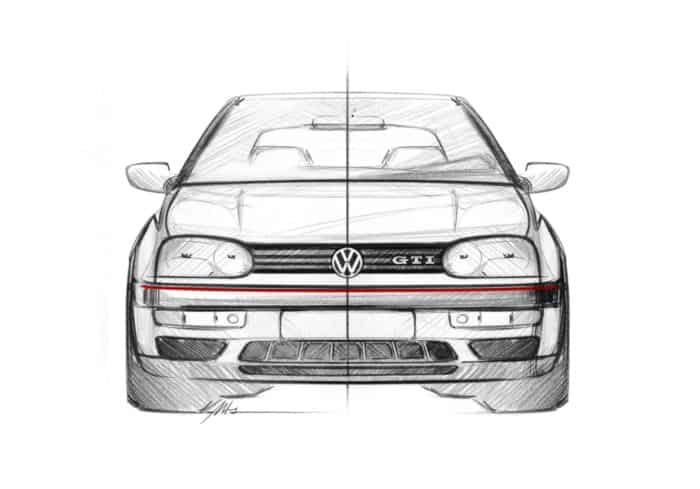 The GTI Mk3 was introduced in 1991 giving a refresh to the last generation. The headlight design changed and the hot hatch started at 115 HP. In 1992 power increased to 150 HP with a new 16-valve powerplant.

However, in 1996 a turbocharged diesel version known as the TDI, joined forces to expand the GTI concept in Europe. Volkswagen also launched a special anniversary model: celebrating 20 years of the Golf GTI. 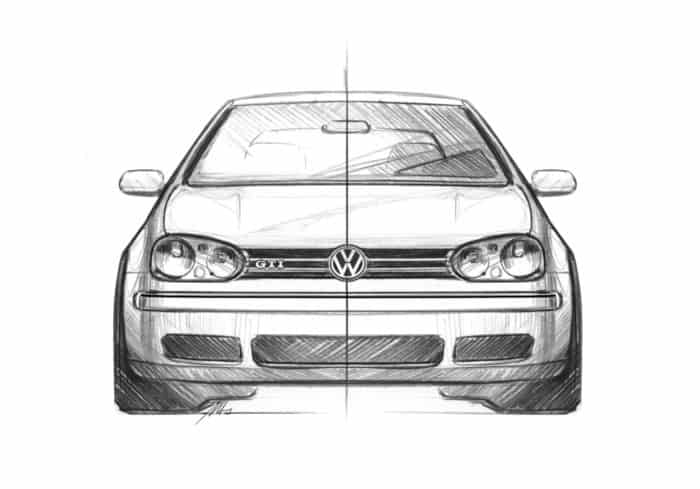 In 1998, the fourth moniker shared subdued styling. It deleted the classic cues like the red strip in the radiator grille as it modernized and started a new VW attitude: clean and grown-up. The Mk4’s 150 HP gas and diesel Golf GTI engines kept automotive enthusiasts happy, whereas a five-cylinder variant topped out at 170 HP.

A few years later, in 2001, VW celebrated 25 years of the Golf GTI hot hatch with a turbocharged “25 years of GTI” special edition which offered up a zippy 180 HP. 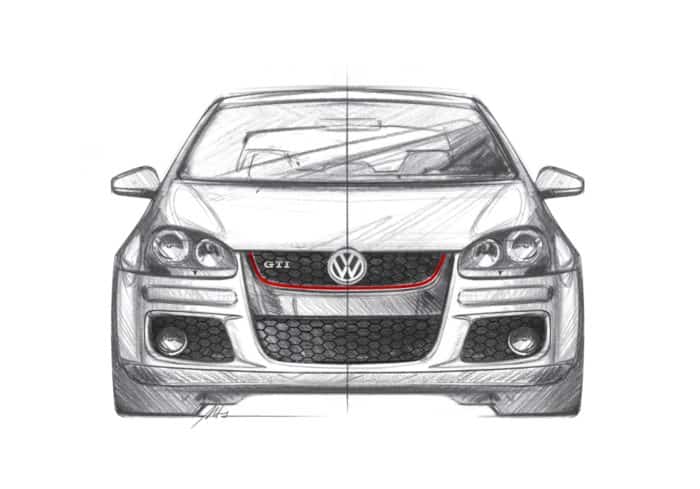 For over 25 years, the VW Golf GTI was known for its excellent handling, sporty looks, and refined driving experience. With four solid GTI versions under its belt, Volkswagen introduced the “comeback of a classic” in 2003 and in 2004, started production of the GTI Mk5.

The GTI Mk5 offered a considerably re-styled look, a fun-to-drive 200 HP turbocharged engine, and excellent handling. The intent with the Mk5 was to ensure its place in the compact hot hatch market. New Denver design wheels and a newly designed black, V-shaped radiator grille made it different and modern. The introduction of the new dual-clutch automatic, while still retaining a manual transmission offering—made driving the GTI Mk5 very fun and engaging. 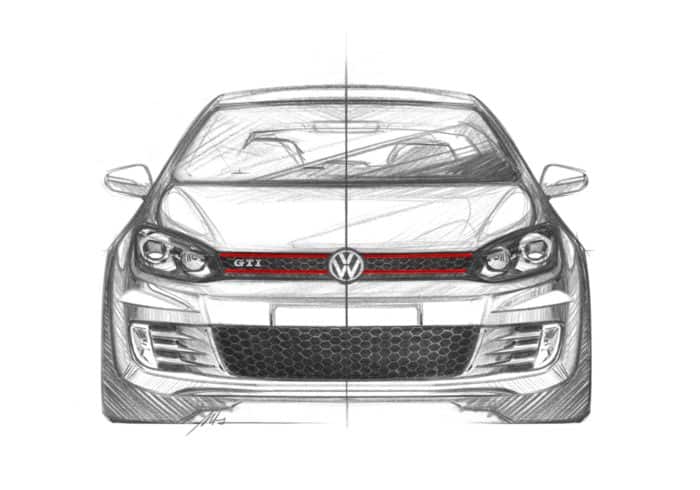 In 2009, the GTI Mk6 showcased a new feature: an electronic differential lock. This GTI featured a turbocharged engine that generated 210 HP, reaching a top speed of 149 miles-per-hour. This GTI variant also boasted other sports car features, like a sound generator and an impressive exhaust system that distributed sound to enhance the overall experience.

The Mk6 switched things up in 2011, for the first time, it was offered as a convertible. This marked VW’s 35th anniversary: the Golf GTI Edition 35. This special edition was the fastest GTI yet, generating 235 mighty horses. 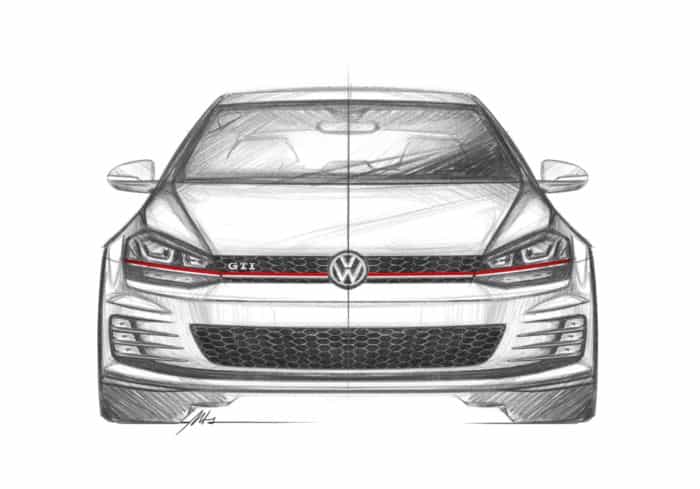 In 2013, the GTI Mk7 changed gears and showcased two engine outputs. The base GTI revved up 220 horses while the new Golf GTI Performance topped that by offering 230 hp. The GTI Performance featured an electronically-controlled torque-sensing limited-slip differential, built on the modular transverse matrix (known as MQB). This allowed for more agility and fun-to-drive moments. The GTI Mk7 is faster and more responsive than any of its predecessors. 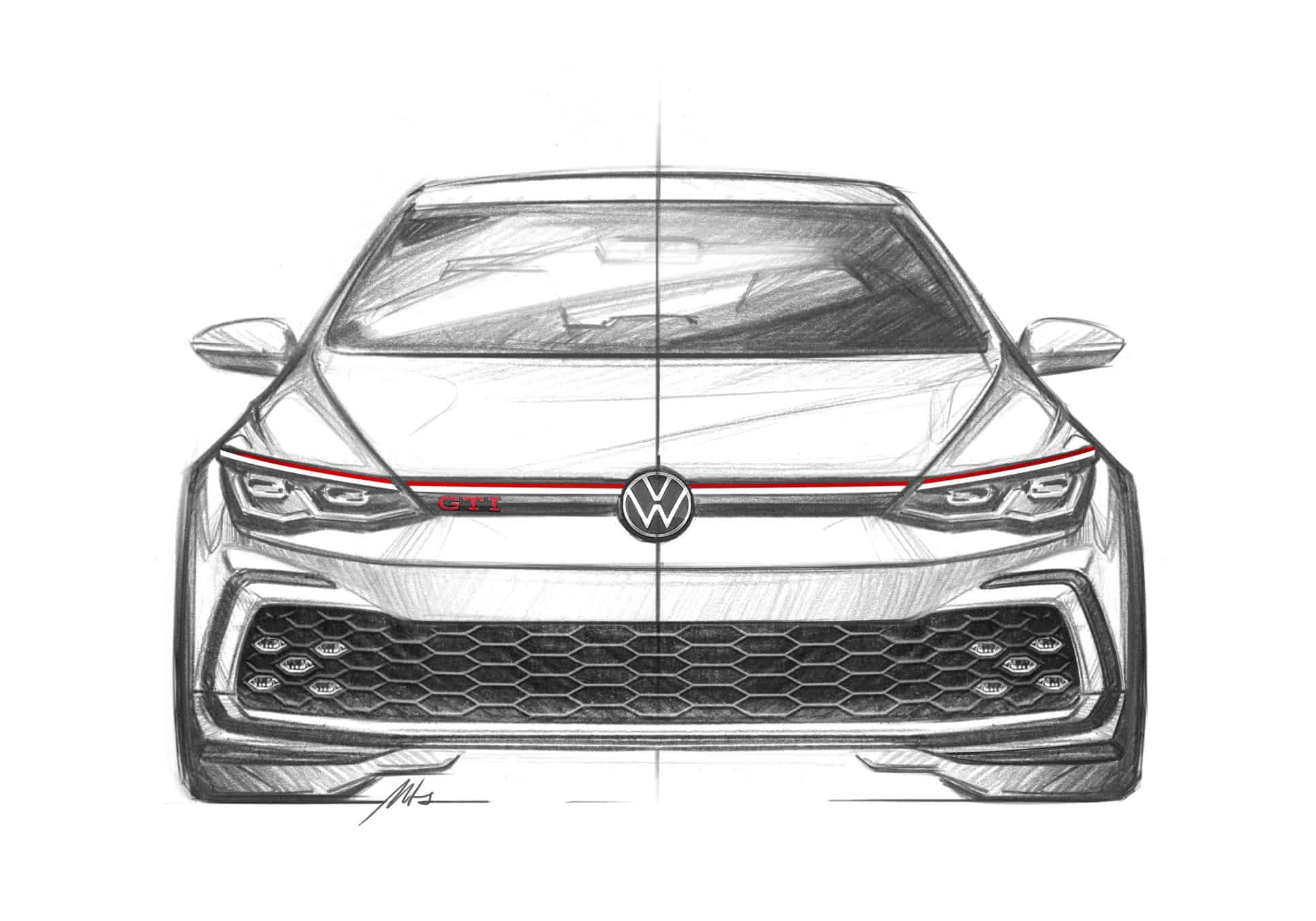 The next-generation VW Golf GTI Mk8 will hit the U.S. market in late 2021, as a 2022 model year vehicle. It will have 242 HP, extensive new luxury options, upgraded safety features, and shiny new technologies.

The Volkswagen Golf GTI, no matter which version could arguably be the world’s most successful compact sports car. 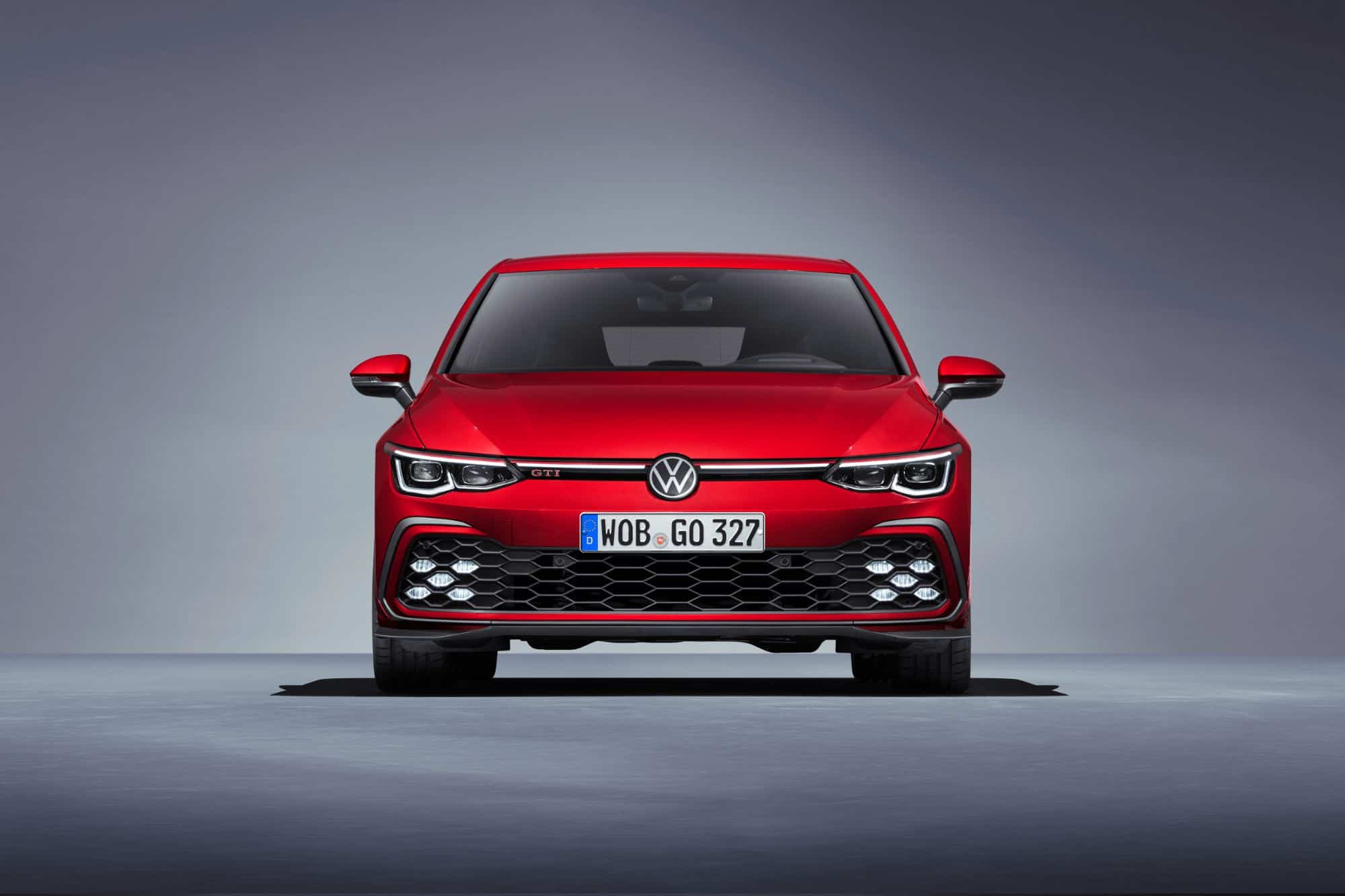 When will the 2022 VW Golf GTI Mk8 be available for sale?

North America can expect the GTI Mk8 to arrive in the second half of 2021.

Europeans will enjoy first dibs on the GTI Mk8 in the second half of 2020.

The manufacturing of the new GTI will take place in Wolfsburg, Germany.

How much horsepower will the 2022 VW Golf GTI Mk8 have?