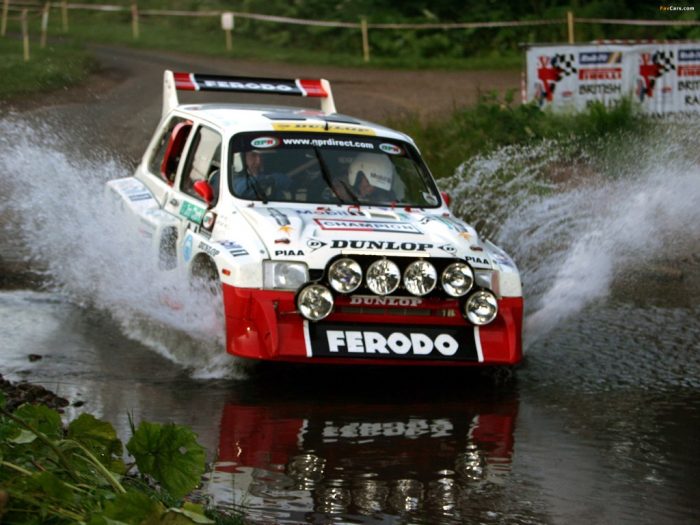 In an effort to reduce the myriad number of classes across motorsports the Fédération Internationale de l’Automobile introduced a set of rules to simplify car classifications across both road racing and rallying. Group A was intended for production-based vehicles and new car models with small displacement engines. Group C was for prototype race cars like the Porsche 962. Group B was little used in racing but became the standard in rallying, it’s loose rules would have allowed 1000 horsepower rally cars by 1987 or 1989, had the series not been cancelled in 1986. Before we look at our list of the top five fastest WRC cars ever, let’s learn a bit about more Group B rally cars and what they stood for.

Back in 1982, Group B was brought in by the Fédération Internationale de l’Automobile (FIA) to replace the outgoing modified grand touring and touring prototypes rally racing categories. With Group A focusing on production vehicles, Group B was introduced to allow racers to compete using small batch production cars with few restrictions on what technology and design could be used. Unlike Group A cars, Group B vehicles enjoyed small homologation volumes, and virtually no limits on what could be equipped. Unfortunately, the craziness of the entrance field caused fast, furious, and dangerous racing competitions. While it was resulting in record success, the World Rally Championship was forced to retire the Group B category in 1986. The World Championship was simply becoming far too dangerous, with too many racing car driver fatalities.

The Group B days may well be behind us but that doesn’t mean that we can’t celebrate some of these classic cars. Some of these successful rally cars went on to become icons in their own right, often being celebrated as some of the best cars that ever raced in auto racing history. Some of the best car models even inspired new race machines that came years later, such as the Subaru Impreza, the re-released Mini Cooper, and legendary Ford Fiesta. While it inspired many, the vehicles that it spawned and evolved are even more impressive, from the fearsome Ford Escort and Fiat 131 Abarth Rally to the groundbreaking Mitsubishi Lancer, there was no denying the value of the group. But like all things, it came to a sudden, abrupt, and sad end.

But rather than mourn, let’s take a look at some of the world’s fastest rally cars that epitomize the spirit and thrill of the banned group.

Never heard of the Group B Citroen BX4TC rally car? Don’t feel bad as many rally enthusiasts haven’t either. The Citroen project was doomed from the start, being launched just months before the ban on Group B.  While imbued with all-wheel drive, Citroen decided against moving the engine behind the driver as had its more successful competitors, it remained in its original location: between the front wheels. The engine produced only 380 horsepower when competitors had 600 or more. The Citroen also retained its stock wheelbase, making it the more difficult to manage on stage roads. It scored points just once, a sixth place in Sweden, not unexpectedly. While this wild World Rally Championship machine wasn’t the fastest rally car ever, it certainly was one of the craziest.

The MG Metro 6R4 was another case of too little, too late. The original design was powered by a V-6 version of an old aluminum V-8, fitted to the Range Rover that General Motors had sold off to the English. MG sought the assistance of Williams Grand Prix Engineering to help sort the chassis and design and build a bespoke engine (the first in rallying). While the MG Metro 6R4 performed well on the shorter British rallies, its legacy in the World Rally Championship is largely one of DNFs.

After two also-rans we move into the serious contenders. Peugeot shocked the establishment with the 205 T16 and its later Evo 2 incarnation, which was unlike any rally car seen before. The outside shell resembled the 205 economy car, but most panels were fiberglass. The engine was moved behind the driver, a complete tube chassis fabricated underneath, and an AWD system installed. Power was quoted as 425 horsepower, but most likely was higher, The 205 T16 and E2 immediately took the lead in WRC competition, winning 12 events, until outdone by our next best rally car.

The Lancia Stratos was a fantastic car, and the company proved that they knew how to build a racer when they produced the Delta S4. It’s a whole different beast to the rear wheel drive Lancia Stratos, but it’s a different kind of car. There’s little argument that the Lancia Delta S4 is one of the best rally cars ever to compete in the WRC, winning numerous Rally Stages, including the prestigious Monte Carlo event. With a layout similar to the Peugeot, Lancia took it one step further by creating an outside shell with no inside panels of any kind.  It created a twin-charged engine (using both a supercharger and a turbocharger for different parts of the rev range and produce 600 horsepower with a 1000 horsepower engine under development. Rumors had it that the Delta S4 was capable of a 0 – 60 mph time of 2.4 seconds – on gravel! Unfortunately a tragic accident with a Delta S4 brought an end to the reign of the Group B WRC supercars.

In our book, the Audi Quattro is number one as it changed rallying forever, and could well be the best rally car of all time. Audi embraced AWD when other manufacturers ignored it. That’s All-Wheel Drive, not Four-Wheel Drive! As a result, Audi captured two manufacturers titles and two drivers championship. And in the 1982 – 1984 seasons, Audi won half of all the events (not even participating in some). A look at the future came in 1984 with the mid-season appearance of the Peugeot 205 T16. For 1985 Audi Sport introduced the short wheelbase Audi Sport Quattro S1 in an effort to keep pace with the mid-engined cars but scored just one win. In 1986, the last year of Group B, the Audi Sport Quattro scored no victories at all.

In the end, Group B just got out of control – these were some of the world’s fastest cars though. Rumors were that the final Audi Quattro S1 engines were  600 horsepower, with the possibility of 800 horsepower, although reliability was an issue.  The Lancia Delta S2 also produced 600 horsepower, however, Lancia engineers were exploring boost pressures that would produce 1000 horsepower. The end came in mid-1986 with the fatal crash of a leading driver and his navigator. Specifications were fixed for the remainder of the year and Group B was replaced by Group A for 1987. As part of the investigation into several Group B accidents, a panel of doctors determined that the cars were too fast for the drivers’ eyes and brain to process the fast-moving course and conditions. Sometimes too fast is really too fast.