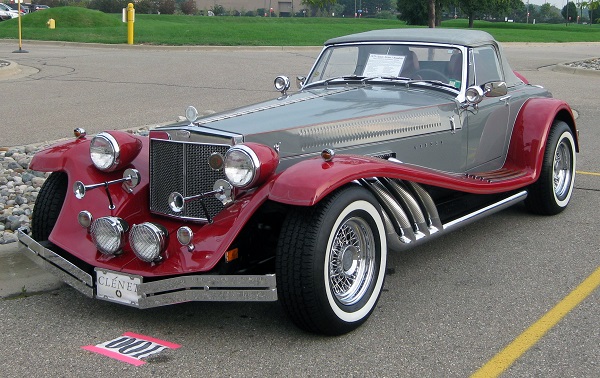 Neo-classic cars are certainly an acquired taste – some of them, frankly, look like shit. But these unique vehicles offer the modern consumer the looks from long-extinct designs, with the technology of modern vehicles. When done right, they certainly turn heads, and are finally gaining recognition from classic car clubs. Is a neo-classic up your alley? Here are five great versions that could help you decide. 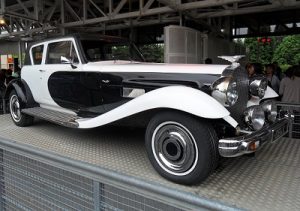 Panther Westwinds was a specialty British car maker, that put out neo-classic for a decade. If you’re a kid from the 80’s, you’ve seen one without even knowing it. Does the black-and-white version at right look familiar? Maybe you should try imaging Glenn Close behind the wheel.

To be fair, this exact version of the De Ville isn’t the best performance example, although it has the stunning looks. Unlike the titular characters, this version of the De Ville was neutered for the live-action 101 Dalmatians movie. The massive 5.3-liter Jaguar V12 was swapped out for a small-block Chevy, presumably because the producers didn’t want to jack up ticket prices by a dollar just to cover the gas bill.

The De Ville had big fans in stars like Elton John and Oliver Reed, not just for the power, but also for providing modern interiors with drink bars, television sets, and much more. It also managed to make Morris parts look stylish – the doors came from the BMC Landcrab.

A neo-classic with a French accent, the Clenet was arguably the most famous of the neo-classics – while the De Ville had a movie, the Clenet had appearances on Dynasty and Dallas, was a feature at many auto shows, and earned plenty of guest-spots in interviews with famous owners like Sly Stallone, Ken Norton, and Rod Stewart.

Considering where the bits and pieces of the Clenet came from, it may be surprising just how good it looks. The chassis is pure American steel, from a Mercury Cougar. The passenger cabin? Torn from MG Midgets, and stuffed with as much Italian walnut, Danish tweakwood, and English leather as possible, plus maybe a Waterford crystal ash tray. Basically the United Nations of neo-classic roadsters.

Underneath the hood is Ford’s 351-400 with a 3-speed automatic transmission which, while only making a paltry 159 horsepower, does have the benefit of high torque. You’ll need all of its 315 lb-ft of torque to get the bulky car moving, but hey, you’re not driving it for performance reasons.

Still in (very limited) production, Zimmer turns out only 10-20 new units every year, and the cost reflects that – don’t even think about inquiring unless you’ve got $220,000 or more on hand. What is surprising about these cars is what is underneath. Sure, on the outside, you’ve got the gilded-age Gatsby look. The functional tires riding high in front of the doors, the open-front fenders. It’s got a giant gold eagle smack in the front – probably worth more than your entire car. But doesn’t that passenger cabin look a bit…. familiar?

That’s right, it’s built from a Ford Mustang. And when we say “built from,” we mean that the chassis, most of the frame, the engine, transmission, emissions – it’s all Pony. The disadvantage to this is you might think you’re paying for a really expensive Mustang. What it actually means is that you have a work of art on wheels, totally unique through the exterior and cabin, but can be serviced by anyone who can work on a Ford. Underneath the hood is the famed 5.0 V-8. On top of that, it comes with all of the emissions and crash testing the Mustang undergoes, making it totally road-legal, no extra work needed. 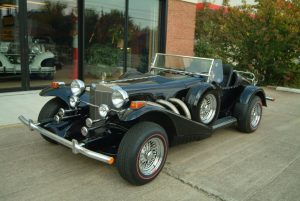 I’ll come right out and say it – the Excalibur Roadster is an exquisite piece of machinery. You simply can’t deny that. Open wheels, open top, a sexy yet stable body. Back in my youth, I had a picture of it taped up alongside the other bonkers cars of my dreams – Lambos, Ferraris, classic muscle like the SuperBird.

Unlike many of the neo-classics, it wasn’t all show and no go. This was a roadster that was meant to be driven in a sporty capacity, from the four-speed manual to the 454 under the hood. Granted, if you really wanted a driving experience, you’d go for one of the Series I SS-SSK models, which sported 350-horse engines in a 2,447-pound car. But we’re talking looks here, and the Series III was the zenith of the Excalibur models, and it wasn’t a slouch in performance, with a 0-60 time of 8.7 seconds. By comparison, a third-generation ‘Vette with the L48 engine also managed the same acceleration time, despite weighing a half-ton less. 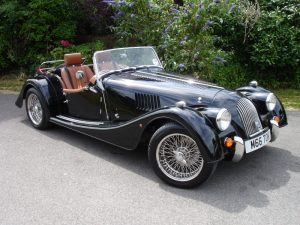 It may be hard to call the Morgan a neo-classic, given that the design isn’t really a throwback – Morgan designers have just been supremely lazy. Or maybe they know a success when they see one. After all, the Morgan 4/4 has been in production for almost 80 years. The Roadster 3.7 is also hard to call a neo-classic due to its incredible performance numbers. Powered by an ultra-modern Ford Duratec V6, and weighing in at just over 2,000 pounds, this little old car posts a staggering power-to-weight ratio of 295 bhp-to-ton. For comparison, the Merc C-Class 63 S AMG has 291 bhp-to-ton.

But just look at that car. Supple leather seats, the graceful lines of a bygone era, wood trim all around – even the classic displays and dials. It also, thankfully, avoids Morgan’s unfortunate habit of making their cars look cross-eyed. The Morgan Roadster is a true neo-classic, and it won’t destroy your bankroll in the process – you can get one of these for less than a brand new (and slightly soulless) Benz E400. The best argument for the Morgan is that, unlike the rest of them, you won’t look like a giant dork when you’re behind the wheel. Maybe a little dork. But not a giant one.